Riding Across WA on the Palouse to Cascades Trail 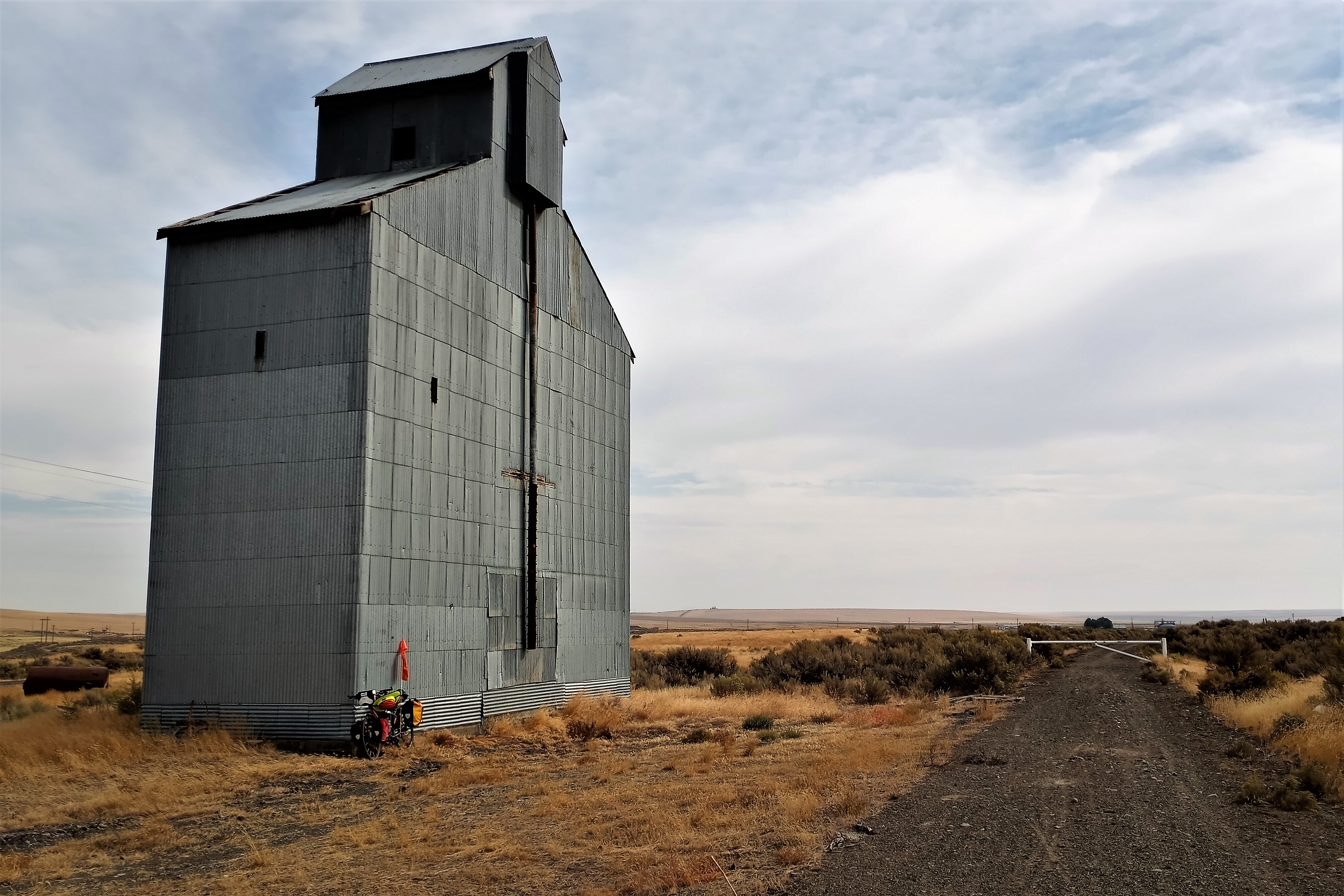 Spanning more than 250 miles from the Idaho border to the foot of the Cascade Range near Seattle, the Palouse to Cascades State Park Trail is one of Washington state’s greatest recreational bicycling assets--and one of the nation’s most epic rail trails.

In early 2022 we wrote about the opening of the Beverly Bridge over the Columbia River, a milestone achievement that linked the eastern and western halves of the Palouse to Cascades trail.

Amy Korver was among the many people who were excited by the bridge’s opening and inspired to hit the trail. From Sept. 24 to Oct. 3, Cascade Bicycle Club’s community education manager rode the entire length of the Palouse to Cascades, covering 261 miles over seven days.

Upon reaching the end of the trail at the Idaho border, Korver traveled onward to Coeur D’Alene, Idaho, and then pedaled back to Spokane, Wash., tacking on 73 more miles over two days before taking a bus back to Seattle. In all she rode 333 miles.

Korver wrote detailed daily reports for each segment of the trail, its detours, and surface conditions. She also noted where she camped, booked room nights, and found food and water.

Her favorite aspects of the journey include “the quiet,” with “nothing but the sounds of the occasional birds and the gravel under your tires.” She also enjoyed seeing the landscape change from west to east, and reported that she felt “very strong and very resilient after the trip.” 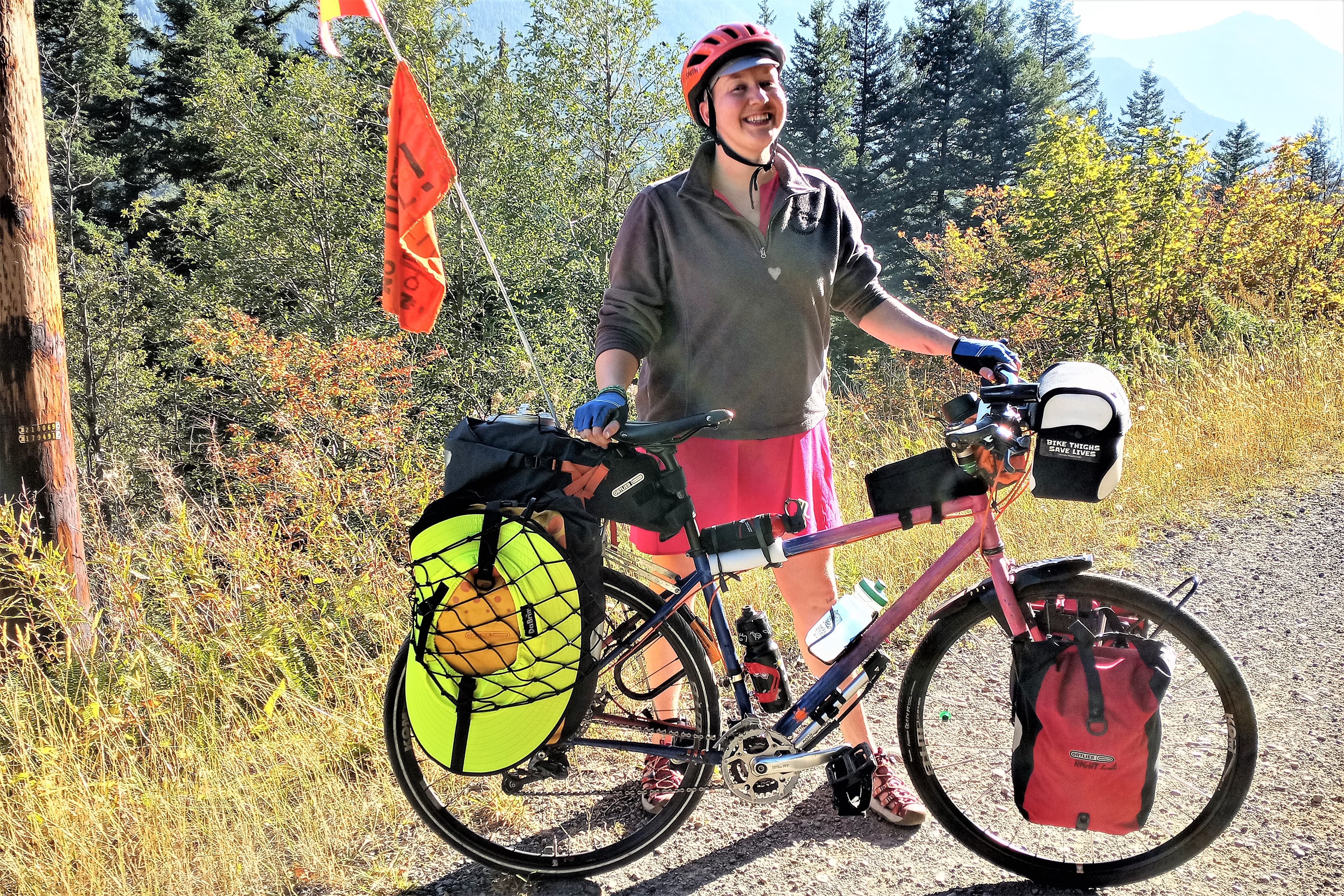 Highlights: Riding over high trestles, views of the forested mountains, pedaling through the Snoqualmie Tunnel.

Lowlights: Pedaling through the Snoqualmie Tunnel! It’s dark, damp, and cold. Losing two crank bolts that she forgot to tighten when working on her bike before departing. Figuring out the packing set-up.

“The trail was busy with weekend riders and hikers but despite the steady uphill climb to the Snoqualmie Tunnel I was able to move quickly due to firm conditions. There was lots of shade, several toilets, and many spots to picnic. I stayed at Lake Easton State Park at one of two hiker/biker sites. Four dudes shared the site next to me, all on their first bikepacking overnight. It was lovely chatting with them.” 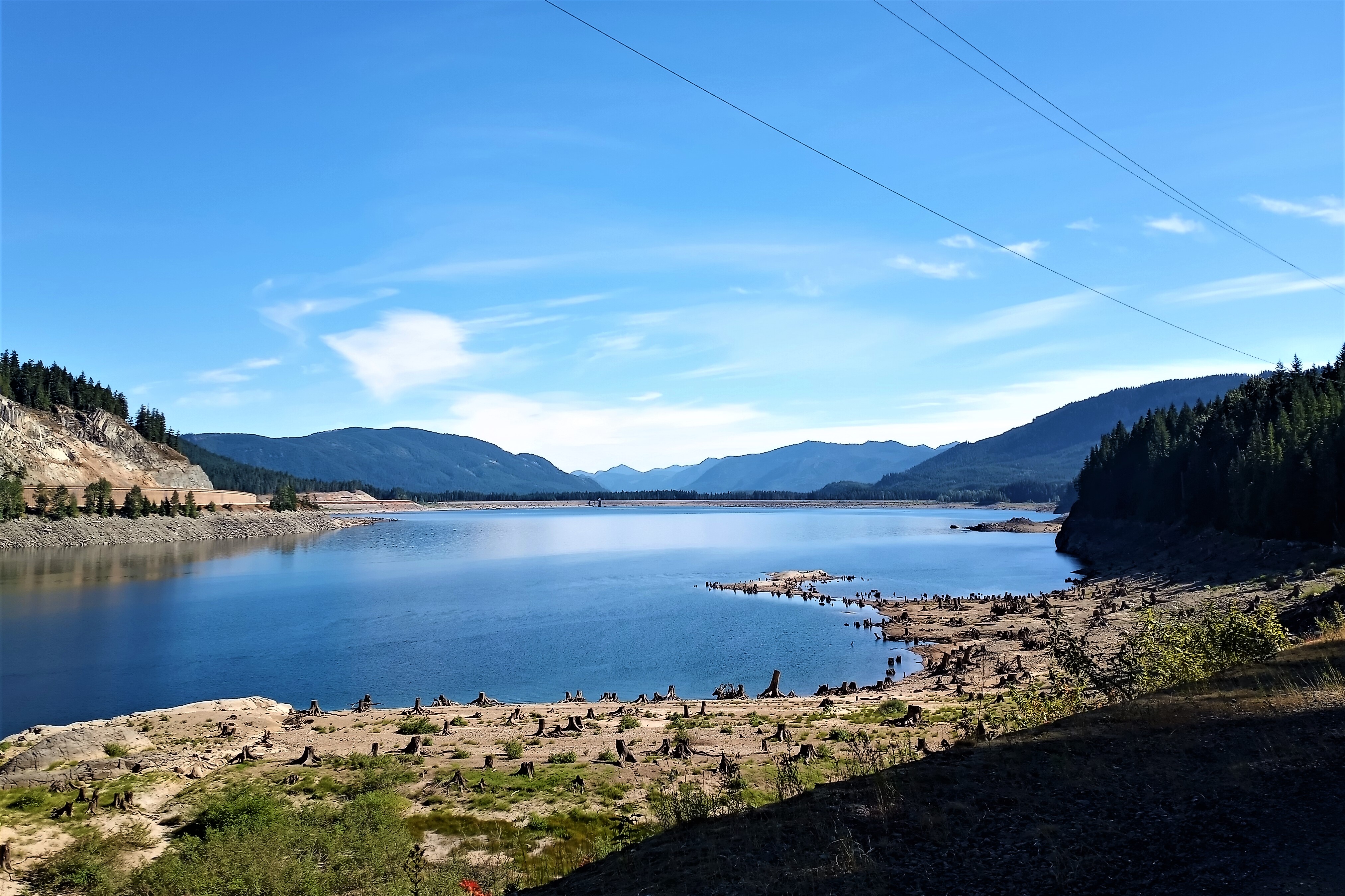 Lowlights: Sections of soft gravel that made her wish for wider tires. 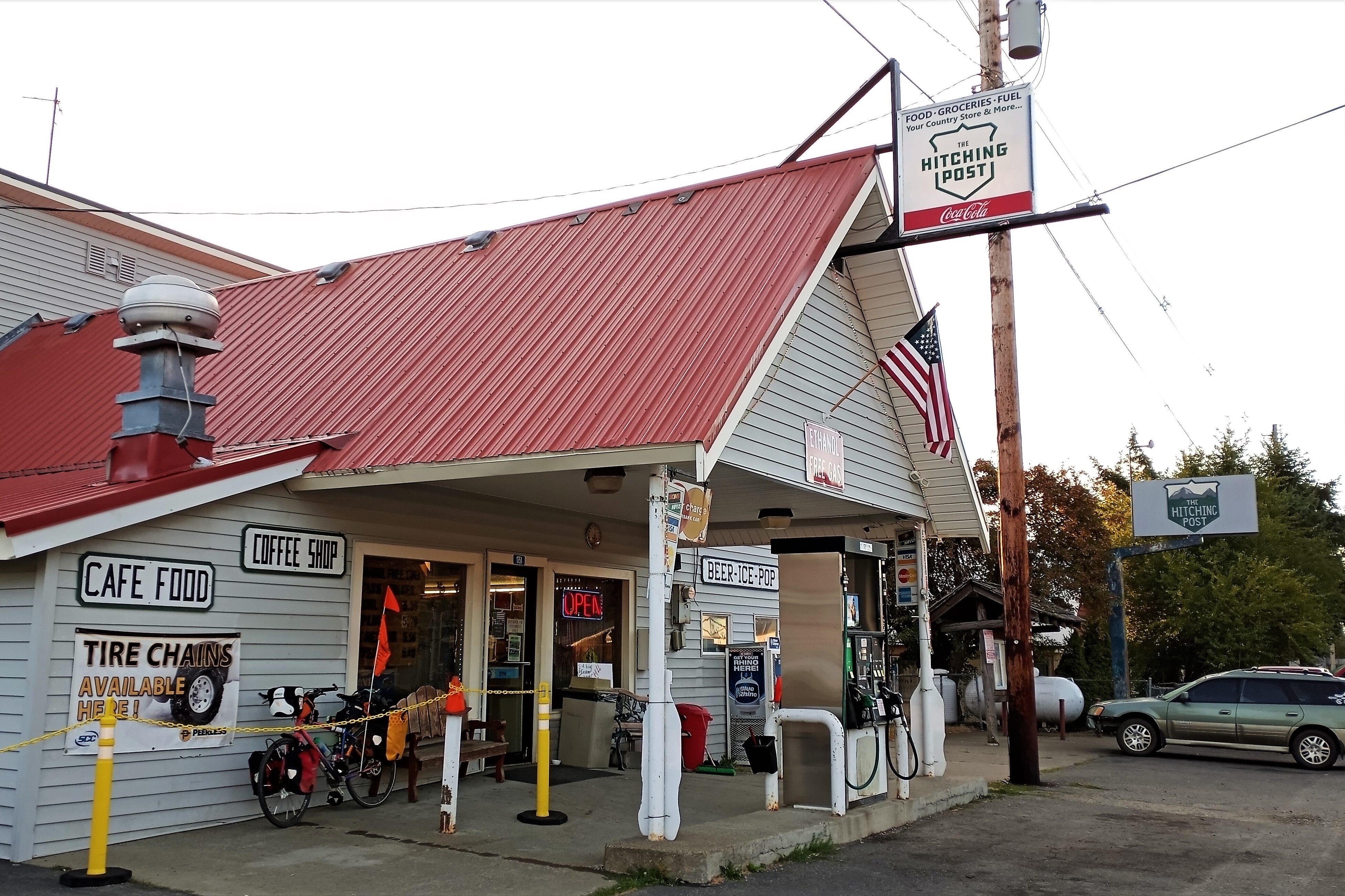 The views expand as the trail descends from Lake Easton toward Cle Elum. “I had to make a detour to Roslyn to get replacement crank bolts for the two that fell out. Ride Roslyn Bikes is a great shop and Roslyn is a neat little town.”

After Cle Elum the trail surface got looser. “I could barely ride. I considered detouring for a few miles. Lower Peoh Point Road from Cle Elum to the intersection of Watson Cutoff Road might be a good choice.”

This trail segment has many small tunnels. “None are long but an easily accessible light would be a good idea.” Korver stayed overnight in Ellensburg “with a delightful Warmshowers host and ate dinner in town.”

Warmshowers.org is a nonprofit community of bike travelers who offer free overnight accommodations to one another, ranging from yard space for a tent to spare bedrooms and couches. 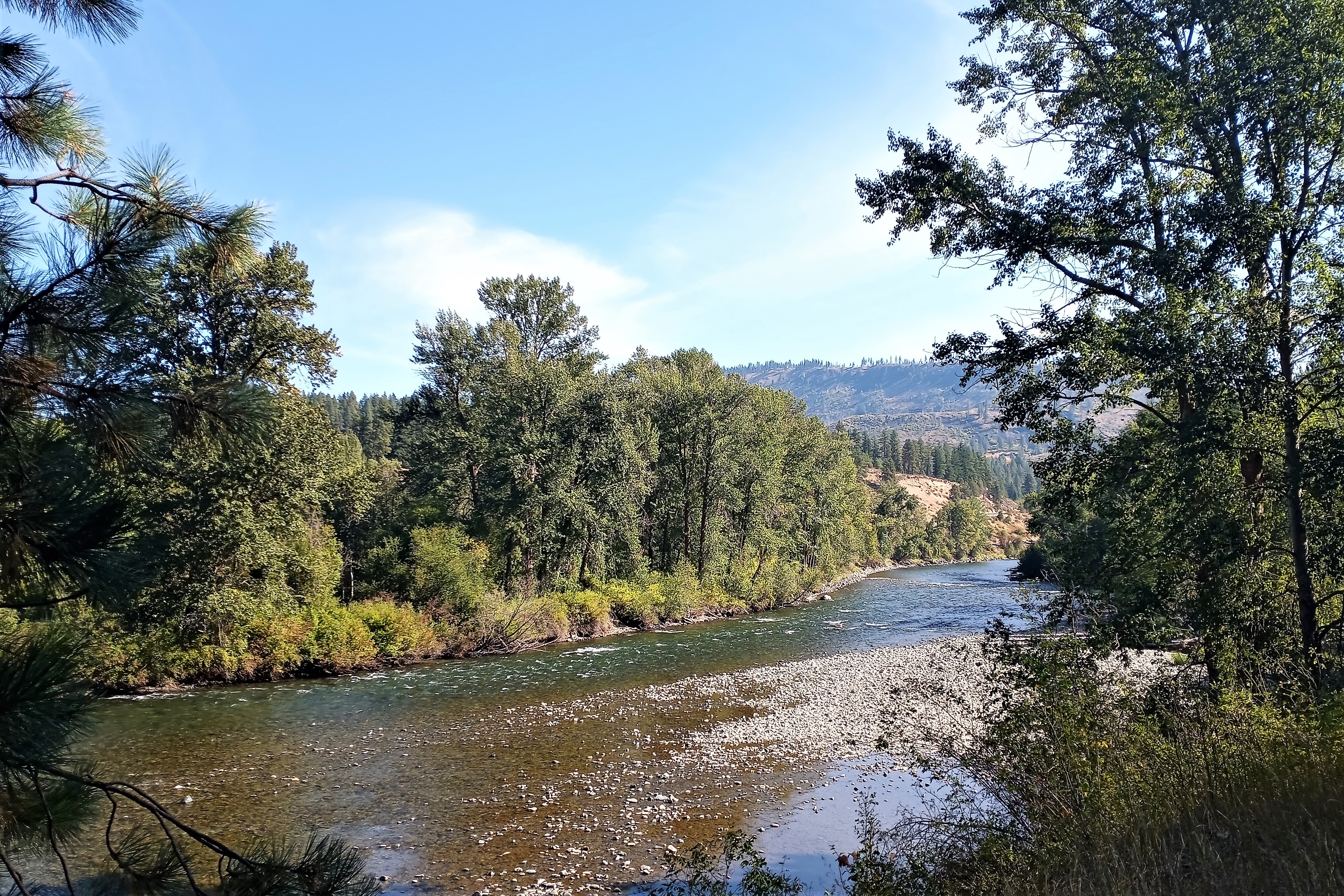 Highlights: “This was my first glimpse of how dry and desolate central Washington can get, and it felt like a whole different world.”

Lowlights: Slow going at times, developed two small gashes on the side walls of her tires that she patched with a candy bar wrapper and duct tape. Minimal water access. 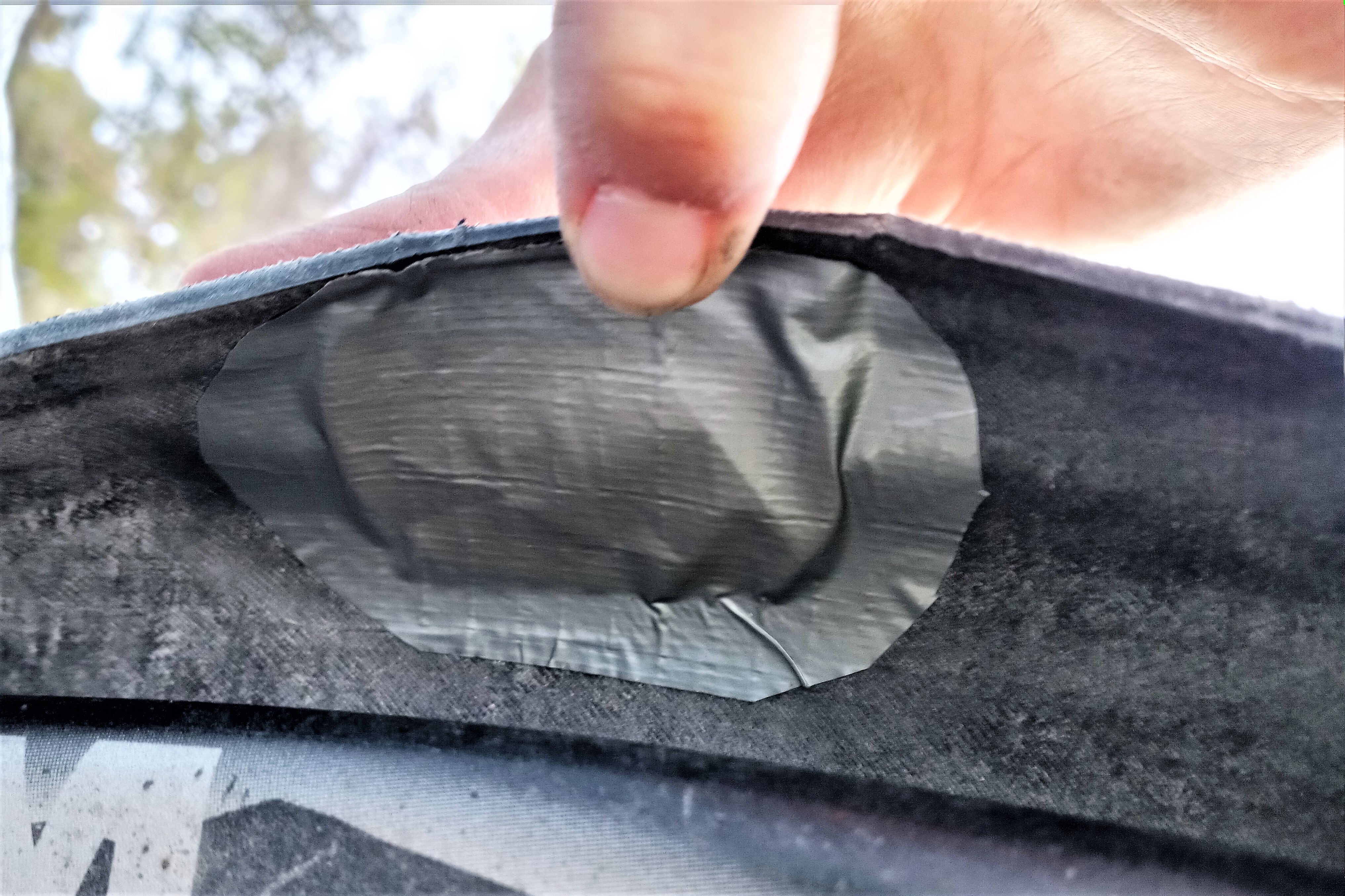 “This was a short day and I was glad for it. I detoured after Kittitas and took Parke Creek Road from Hemingston Road to Prater Road. After the Renslow Trestle the terrain becomes sandy and difficult to ride. If you don't want to struggle, I'd recommend taking Stevens Road, which appeared to have little traffic. The detour around the Boylston Tunnel is rocky, sharp, and winding.”

Korver advises packing extra water because there is no water source between Kittitas and a public potable water station northeast of Doris on Google Maps at 46°52'13.9"N 120°00'15.0"W.

“Reached Wanapum State Park Campground via Huntzinger Road, which had light traffic. The campground was expensive but also well-kept and green.”

Highlights: Fruit orchards, the sparse landscape, the Beverly Bridge. Saw a snake on the trail, and later a hawk flying with a snake.

Lowlights: No water access. Hot and exposed. Some steep climbs and highway detours. Got chased by small dogs. Broke a spoke.

“This was the hardest day of riding.” Pedaling over the Beverly Bridge and seeing the views of the Columbia River was a highlight. “I biked through Beverly to stop at the 76 gas station and mini-mart and was chased by at least four small dogs.” 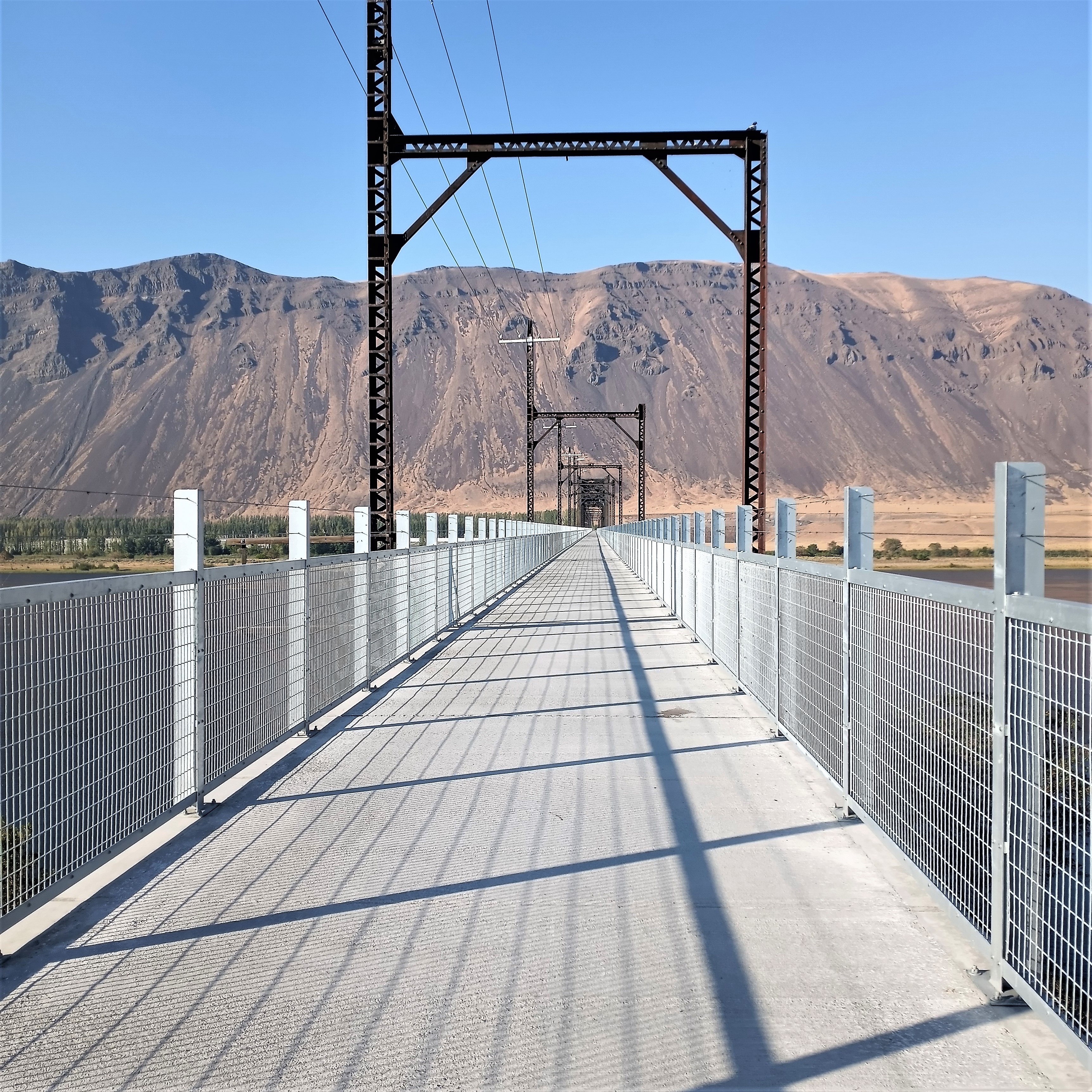 Korver detoured to Lower Crab Creek Road to avoid a sandy section, and she saw only three vehicles in five hours on the gravel road. She recommends avoiding State Route 26 due to fast traffic.

The temperature hit 88 degrees Fahrenheit and “I was wilting. I couldn’t imagine doing this in hotter weather. There was no shade and no drinking water sources between Beverly and Othello.”

Korver planned to stay at the Adams County Fairground, “but I mistakenly arrived at the wrong section of the campground where there were no other people so I instead rode into town and got a room at Othello Inn and Suites. Sheets and refrigeration never felt like such a luxury.”

Lowlights: Got a flat from a goathead thorn. Developed saddle sores.

“I sent my family a video because this section looks so much like Iowa where I grew up. Gently rolling hills covered in wheat and other crops. Traffic was light on West Lee Road and Booker Road, although the few vehicles were large trucks.”

Korver met a fellow bikepacker whom she nicknamed Dave the Bike Dad. “He was taking his time and heading the same direction. I was very glad to have a buddy. We camped in Ralston’s city park, which is well-taken care of with potable water. Ralston is tiny and camping solo could be spooky, so I was glad to have a buddy.”

Lowlights: The day was too long, it drizzled, saddle sores. 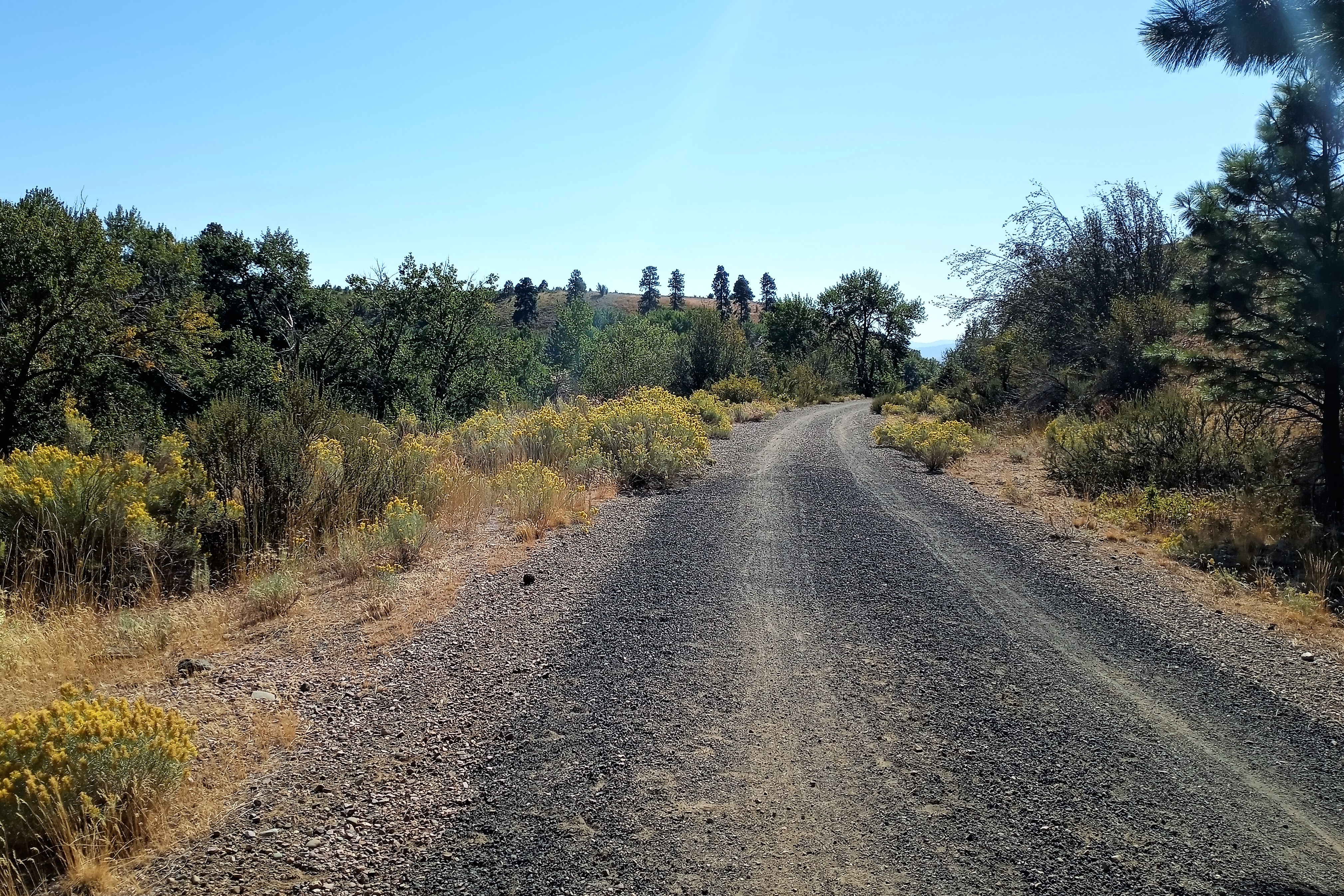 “This was another tough day of riding. The highlight was near the start. Riders are asked to detour for about seven miles due to a small bridge being closed. But a farmer has agreed to let folks cut through his pasture at Cow Creek Crossing. It is literally through an active cattle field and you ride where the farmer’s truck has created two tracks through the vegetation.”

Korver and Dave took their second detour of the day onto Texas Lake Road “and I got discouraged. I was tired, feeling slow, and my saddle sores were uncomfortable. Dave’s Bike Dad instinct and motivation helped.”

After a long day of gray skies and drizzle, they set up camp at Creekside Farm and rode into town for dinner–returning to their tents just before it poured. 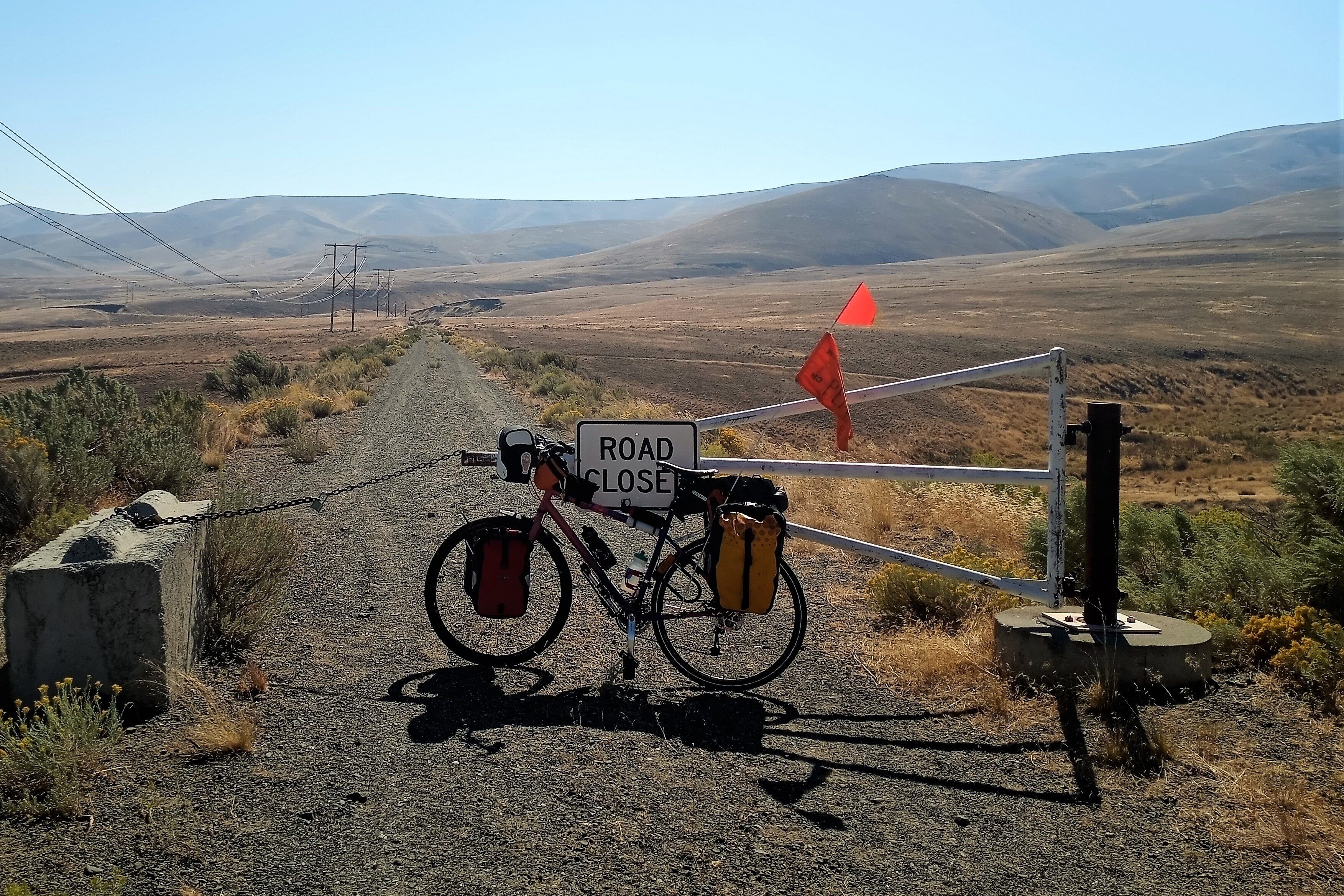 “I was in good spirits and ready to complete the trail, but Saint John is a cute town of about 600 people so Dave and I took our time and stopped at a cafe for breakfast. The owners and customers were friendly, and one fella told us about riding Seattle to Portland in 1982, back when there were only a few hundred riders.”

“Pine City Road out of Saint John was gorgeous and the drivers gave us wide margins. Due to detours and construction, we were on the road until Rosalia when we finally got back onto the trail. Dave and I parted ways with well wishes.”

The trail got muddy as Korver approached Tekoa, and thick mud stuck to her tires and caked on her derailleur and fenders.

Many apple trees lined the trail. “They were delicious and I could smell them from my bike. Near the end of the trail, I rode over the new Tekoa Trestle and arrived in the last town on the route. Tekoa allows camping in the city park and I planned to stay there but a friendly local couple invited me to sleep in their guest room. They were wonderful.”

Korvers says that, “Tekoa is an adorable town, and residents should think about capitalizing on the increased bike traffic the town will get in future years” by creating more amenities for bike tourists. 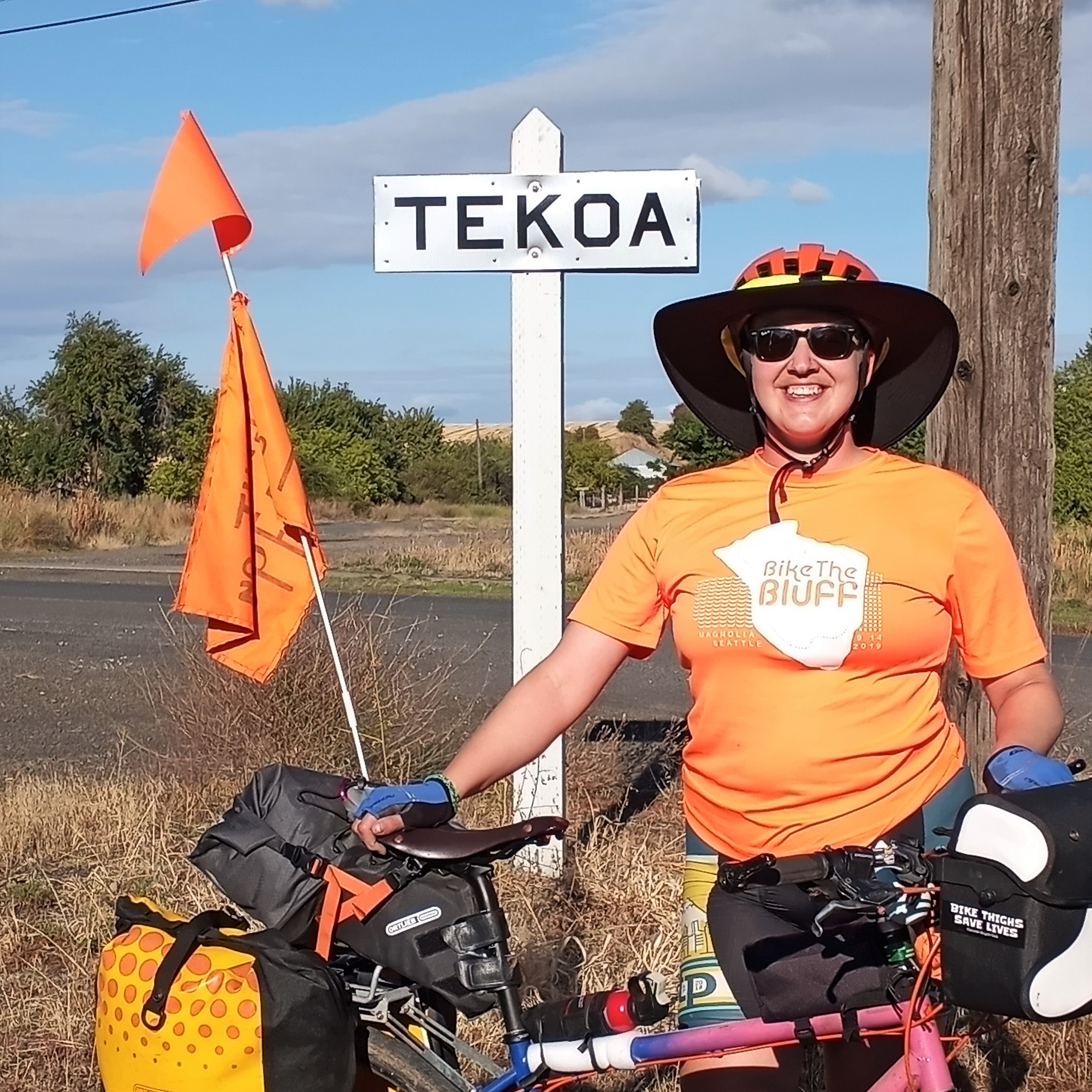 Lowlights: Pushing my bike through mud, wiping it off, and losing my water bottle and bottle cage in the process.

“This day ended up being quite the adventure. I rode along the last remaining segment of the Palouse to Cascades trail and then along Agency Road toward Plummer. The trail was muddy from the previous day’s rain and I often had to carry it to avoid mud as well as goat heads.”

Korver originally planned to ride all the way to Coeur d’Alene “but Dave informed me this ride would be dangerous due to traffic and strenuous due to many hills. Instead I pedaled to Plummer and caught the free bus (with bike racks) to the Coeur d’Alene Casino, and then onward to downtown Coeur d’Alene.”

In Coeur d’Alene, Korver went for a scenic ride on the North Idaho Centennial Trail that wanders for about 10 miles along the waterfront.

Highlights: The Centennial Trail extends all the way from Coeur d’Alene to Spokane. Lovely fall colors, and the Japanese garden in Manito Park.

Lowlights: Lack of wayfinding and signage on the Centennial Trail.

“I took the Centennial trail nearly the whole way from Coeur d’Alene to Spokane. Following this paved trail was wonderful and scenic at times, confusing and stressful at other times. Signage was lacking, and on some stretches the trail runs right alongside the highway with just a line of paint between you and the motor vehicles.”

Korver ended the day with great Warmshowers hosts. The next day, she loaded her bike onto the FlixBus and headed home to Seattle. 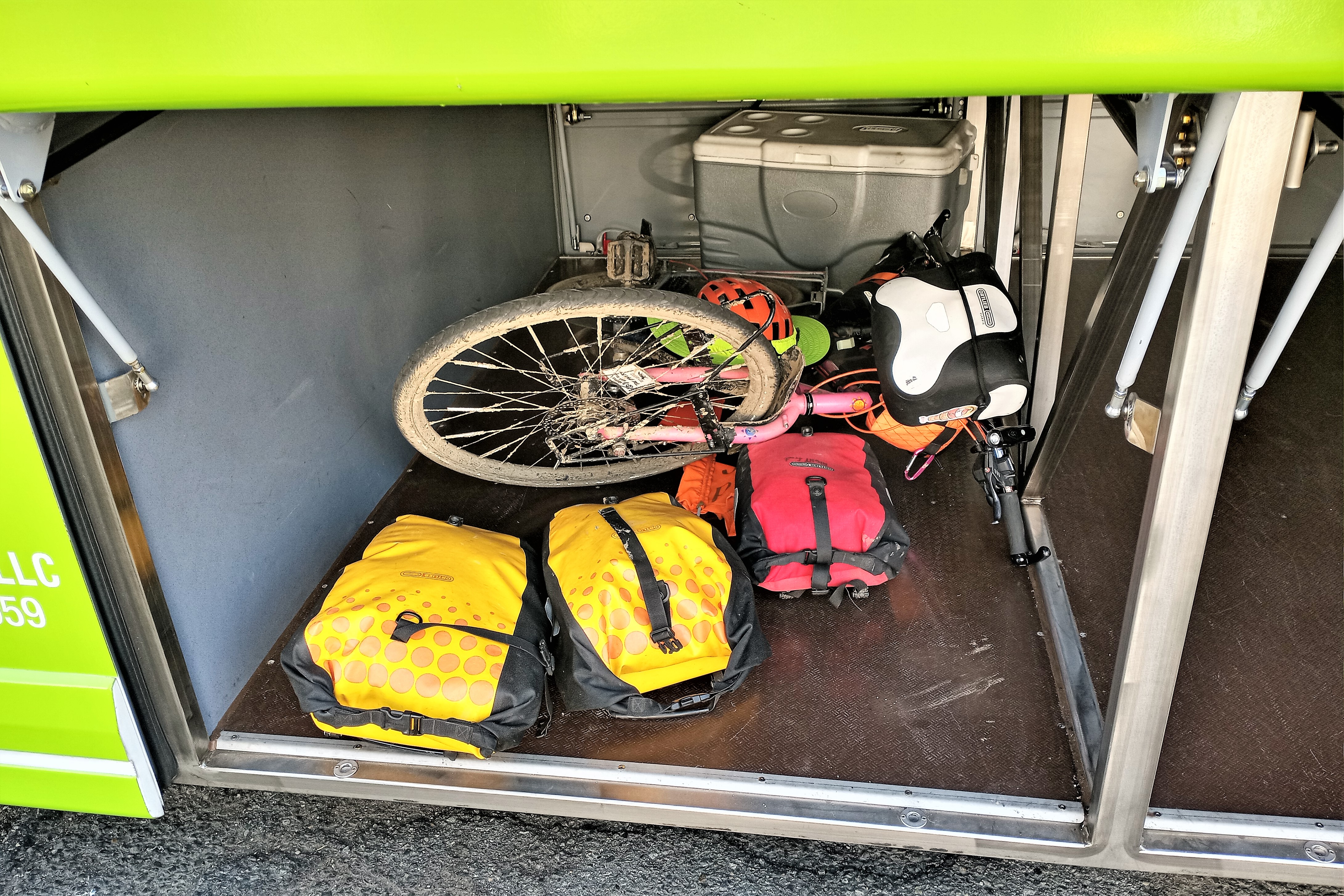 What would Amy do differently?

What gear would she leave at home?

What are Amy’s must-have gear items? 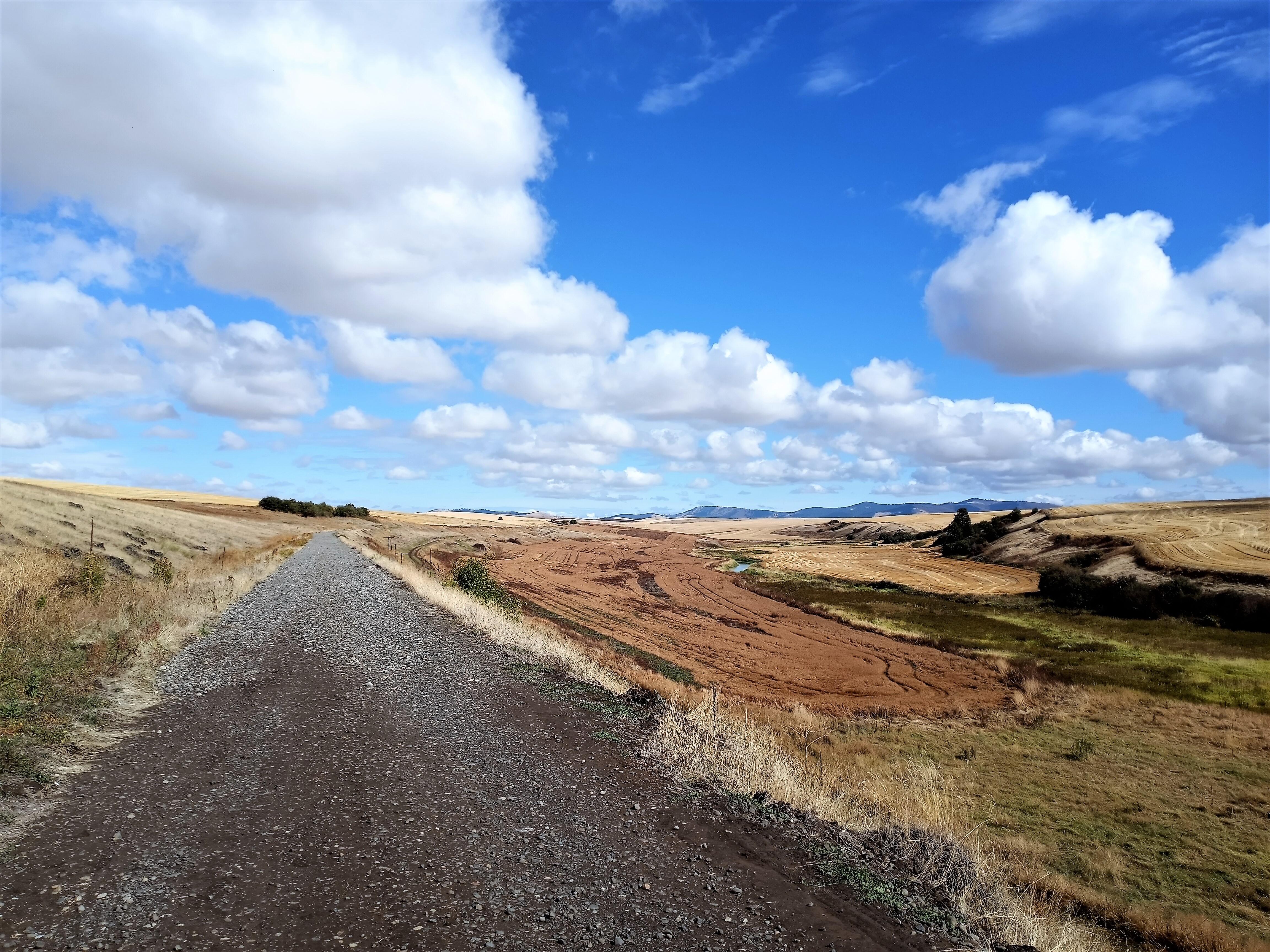