From Farmlands to Oyster Beds: the 56-Mile Willapa Hills Trail is a Scenic Ride Through Washington’s Coastal Foothills 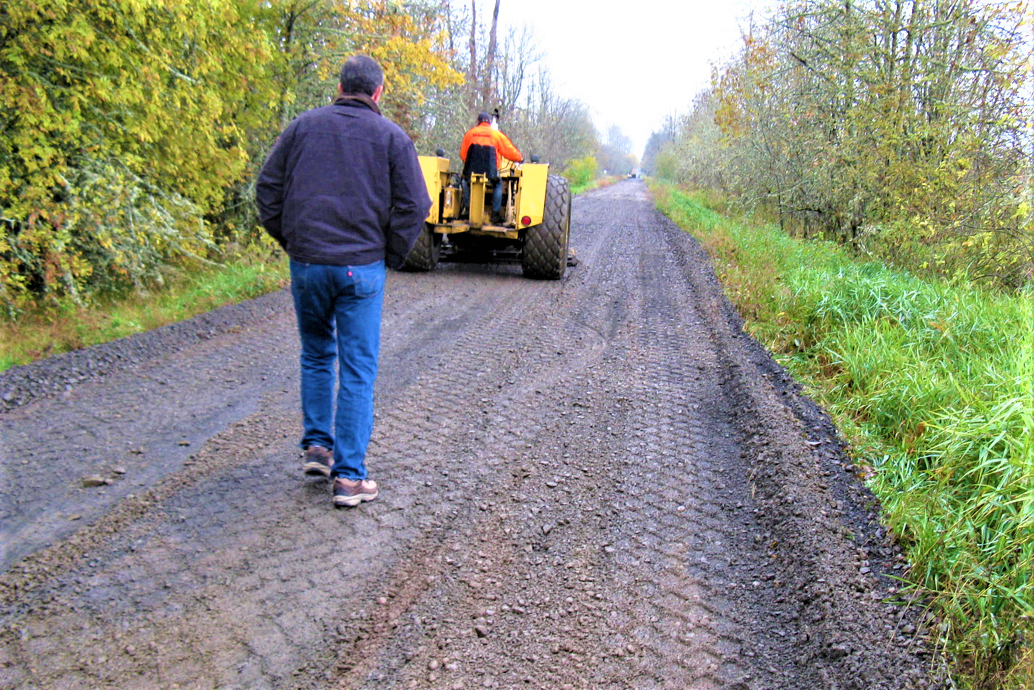 An exciting new long-distance bike trail is nearing completion in southwestern Washington, where the 56-mile Willapa Hills State Park Trail connects the farmlands near the town of Chehalis to the coastal scenery and oyster farming heritage of Willapa Bay.

The trail runs east to west through a historic railroad corridor that spans Lewis and Pacific counties. The railroad tracks and ties have been removed, and riders can enjoy paved and compacted gravel segments on either end of the trail in Chehalis and South Bend.

The Washington State Parks and Recreation Commission is now working on the unimproved segment in the middle and repairing bridges along the trail, with about $8.7 million of projects underway or planned. State Parks officials expect the trail will be rideable all the way through by 2024, although there will be a roughly 15-mile gap of unimproved trail in the middle.

“Although the trail will be ridable by 2024, we hope to find funding to install compacted gravel to fill that remaining 15-mile gap by 2026, which will make the surface more consistent and enjoyable,” says Michael Hankinson, a State Parks planner who is overseeing the Willapa Hills trail development. “It’s expensive work because the area is very watery with lots of bridges and erosion challenges.”

The trail parallels State Route 6 and follows the Chehalis River and Rock Creek for much of its length. For adventurous riders with wide mountain bike tires, the entire 56 miles are mostly rideable now--although you’ll have to walk across or detour around some old railroad bridges that have not yet been improved with decking and railings. 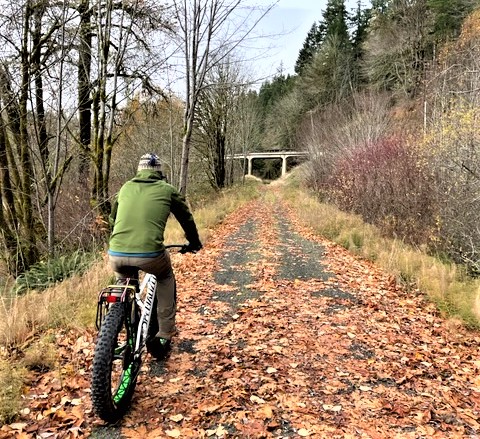 Jeremiah Meacham and his wife, Anna, drive an hour from their home in Puyallup about twice a month to ride segments of the Willapa Hills Trail on their fat tire bikes. “We really enjoy it. There are some beautiful spots along the river where we stop and have lunch and then ride back to our starting point,” says Meacham, secretary of the Foothills Rails-to-Trails Coalition.

“The trail is gorgeous,” says Jim Sayce, manager of the Port of Willapa Bay, which is working with the state to complete the trail through Pacific County as a way to boost bike tourism and healthy recreation.

Sayce, who rode Cascade’s Seattle to Portland on a fat bike, has seen the positive impact of bike trails on communities. He was involved in the creation of the Long Beach Discovery Trail that winds through the dunes of Washington’s longest peninsula. A hotel owner told Sayce that the Long Beach Discovery Trail resulted in a big increase in customers.

With that lesson in mind, Hankinson and Sayce began planning for the trail’s development in Pacific County about five years ago. They convened community meetings where public interest was high. “We have a lot of older residents who are moving from kayaks to electric bikes,” Sayce says. “People want more healthy outdoor activities.” 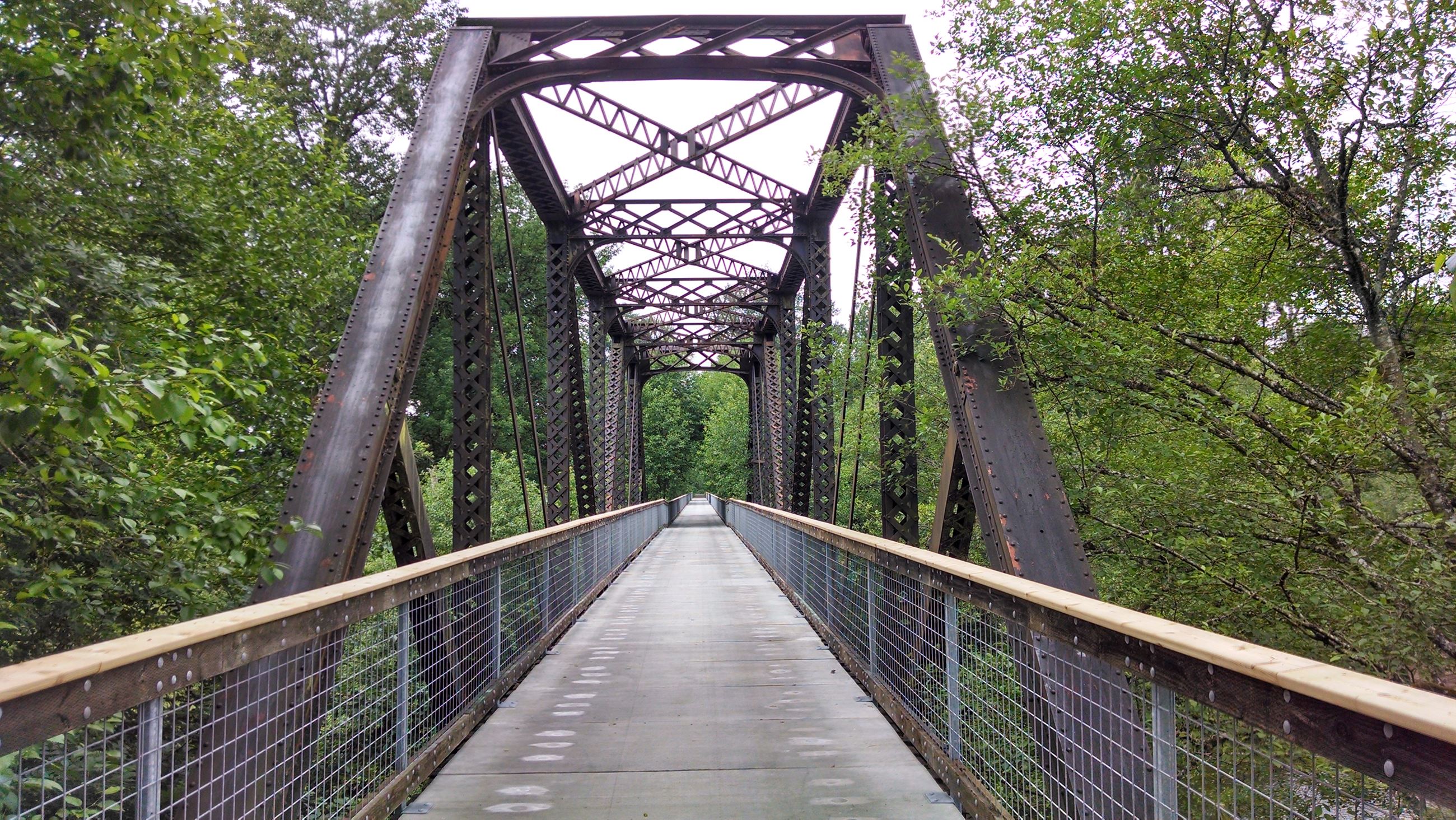 Photo: Thanks to Chris Brewer Photography.

A boost in bicycle tourism would provide a much-needed infusion of money into South Bend and neighboring Raymond. Bike tourists “stay the night in lodgings, eat food in restaurants, visit the grocery store,” Hankinson says.

Money for the trail work comes from the Washington Wildlife and Recreation Program (WWRP), the state’s capital budget, federal funds, and donations from Boeing. Washington Bikes has advocated for full funding of the WWRP in past legislative sessions, and it plans to do so again during the next session in 2022.

Beginning in the late 1800s, the Northern Pacific Railway used the railroad line to carry timber and agricultural products to market. “Small communities, many with sawmills, rose up to process lumber,” according to the Willapa Hills State Park Trail website. “Newly cleared acreage was converted into farmland. Crops were loaded onto railroad cars and carried to markets throughout the American West.”

The rise of automobiles killed the railroad, which at one time linked Willapa Bay to Lake Superior 2,000 miles away. Passenger service ended in 1954, and the rail route was abandoned in 1990.

In 1993, the Washington State Parks and Recreation Commission acquired the railroad right-of-way, beginning a new life for this route as a rail trail. Rail trails are an increasingly popular way to repurpose old rail lines as multi-use trails. 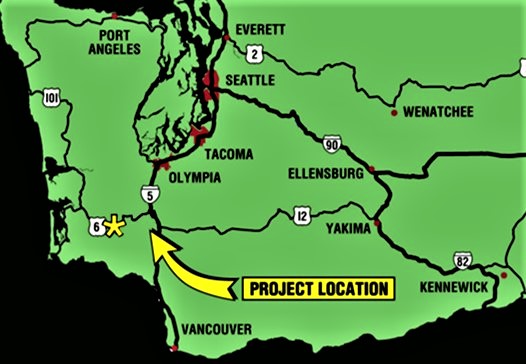 A New Future: From Rail to Trail

In July, State Parks signed an agreement with the Port of Willapa Harbor to formally partner on the trail development. Lewis and Pacific counties both support the trail. The eastern half in Lewis County is mostly complete, with five miles of paved surface starting in Chehalis followed by 19 miles of compacted gravel, plus 18 bridges that have been improved with wood or cement decking and safety rails.

Riders who don’t want to travel on the unimproved middle segment can do a roughly 40-mile out-and-back ride on compacted gravel from the Adna trailhead. State Parks is currently building a bridge over State Route 6 between Chehalis and Adna. Until that bridge is completed in 2024, it is best to start at the Adna trailhead, where a Discovery Pass is required for parking. 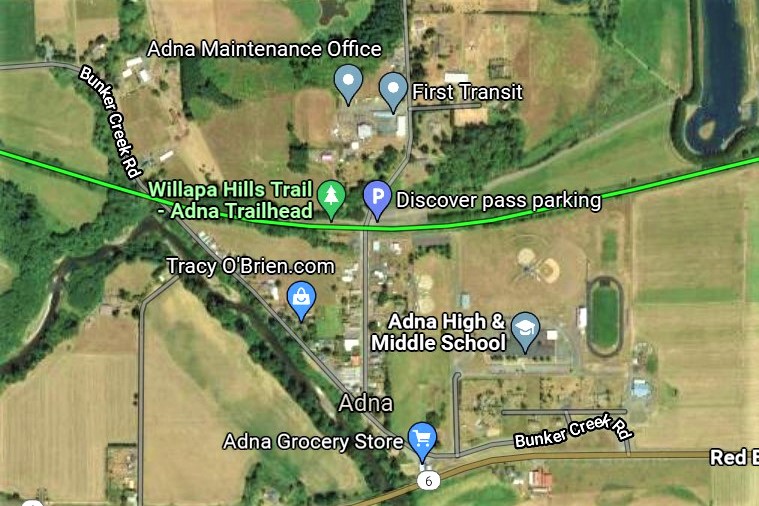 Pacific County’s trail segment is the next focus for work. In addition to WWRP funds and a matching grant from the Port of Willapa Harbor, the Lewis County Community Trails nonprofit donated funds, “demonstrating how important this Pacific County project is to the public—even for those living in another county,” according to Hankinson.

Camping and Resources for Touring Cyclists

While the State Parks website doesn’t encourage people to bike the unimproved segment, it is rideable for experienced and self-sufficient individuals with a gravel bike or mountain bike.

In November, my wife and I rode the completed segments on the eastern and western ends of the Willapa Hills trail and were impressed by the area’s rural beauty. We stayed in a hotel in Chehalis one evening and spent the next night in a hotel near Willapa Bay. We plan to return with our mountain bikes to ride its entire 56 miles next spring--a great tuneup for STP and Cascade’s 2022 major rides season.

With plenty of overnight lodging options, the Willapa Hills trail will be a great two-day weekend ride when fully completed: Chehalis to South Bend on the first day, with an overnight stay on the coast, then back to Chehalis on the second day. Make sure to enjoy some oysters when visiting South Bend. Willapa Bay’s clean waters produce world-famous oysters.

Campers can spend the night at the Helen Davis Memorial Park on the Willapa River, with bathrooms and a grassy area for tents. Sayce and Hankinson are talking with landowners along the trail who are interested in developing more camping facilities for touring cyclists.

Future plans for the Willapa Hills State Park Trail include a one-mile extension through South Bend, with a formal trailhead and parking lot. Another trailhead is planned for the town of Menlo. Sayce also hopes money can be found to repair and upgrade the historic Willapa River Swing Bridge and make it part of the trail in future years. 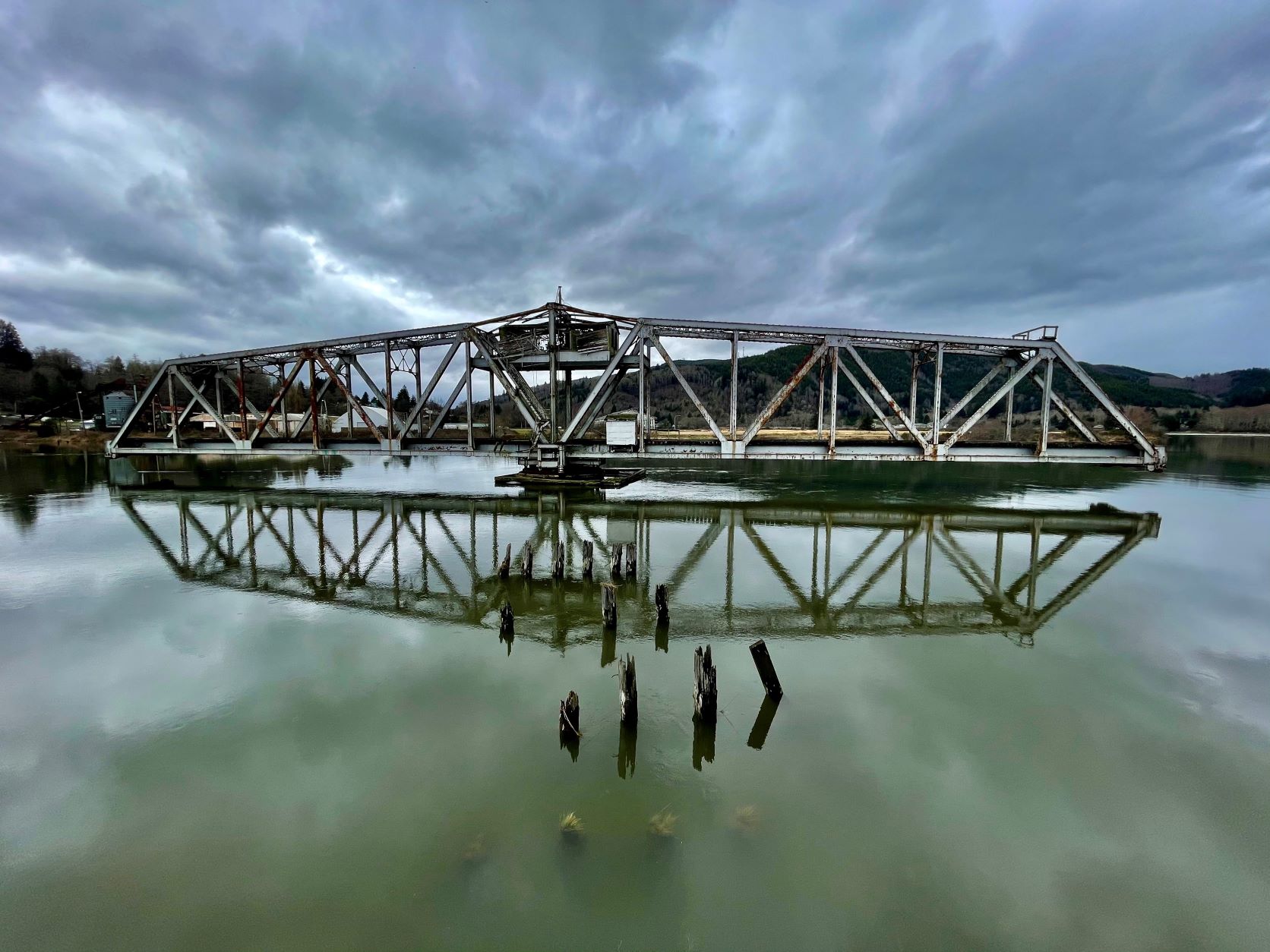 The historic Swing Bridge that would rotate to accomodate trains or the passage of boats. Photo: Port of Willapa Harbor.

“The beauty of both Willapa Hills and Palouse to Cascades is that their development increases the possibility of connecting them,” Wert says, “and being able to ride across the entire state on trails.” 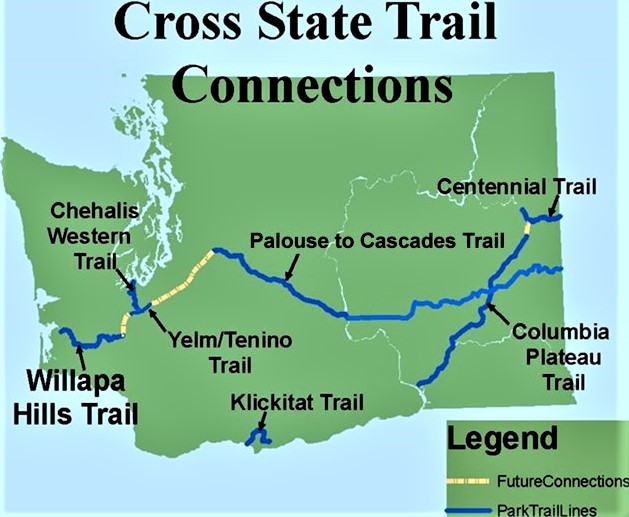