The historic Beverly Bridge over the Columbia River is expected to open to bikes within the next few months, a milestone achievement in the development of the 288-mile Palouse to Cascades State Park Trail that spans much of Washington state.

“Work on the Beverly Bridge is just finishing up, and the bridge will be available to trail users in early 2022,” said Randy Kline, a trail planner with the Washington State Parks and Recreation Commission, which oversees the Palouse to Cascades trail.

Located in central Washington, the former railroad bridge is undergoing a $5.5 million retrofit to add railings and decking to make it safe for people biking and walking. The bridge’s completion will connect the eastern and western halves of the Palouse to Cascades trail, which runs from the Idaho border to just outside of Seattle. Washington Bikes, the sister organization of Cascade Bicycle Club, was instrumental in securing funding from legislators in Olympia to complete the bridge project. 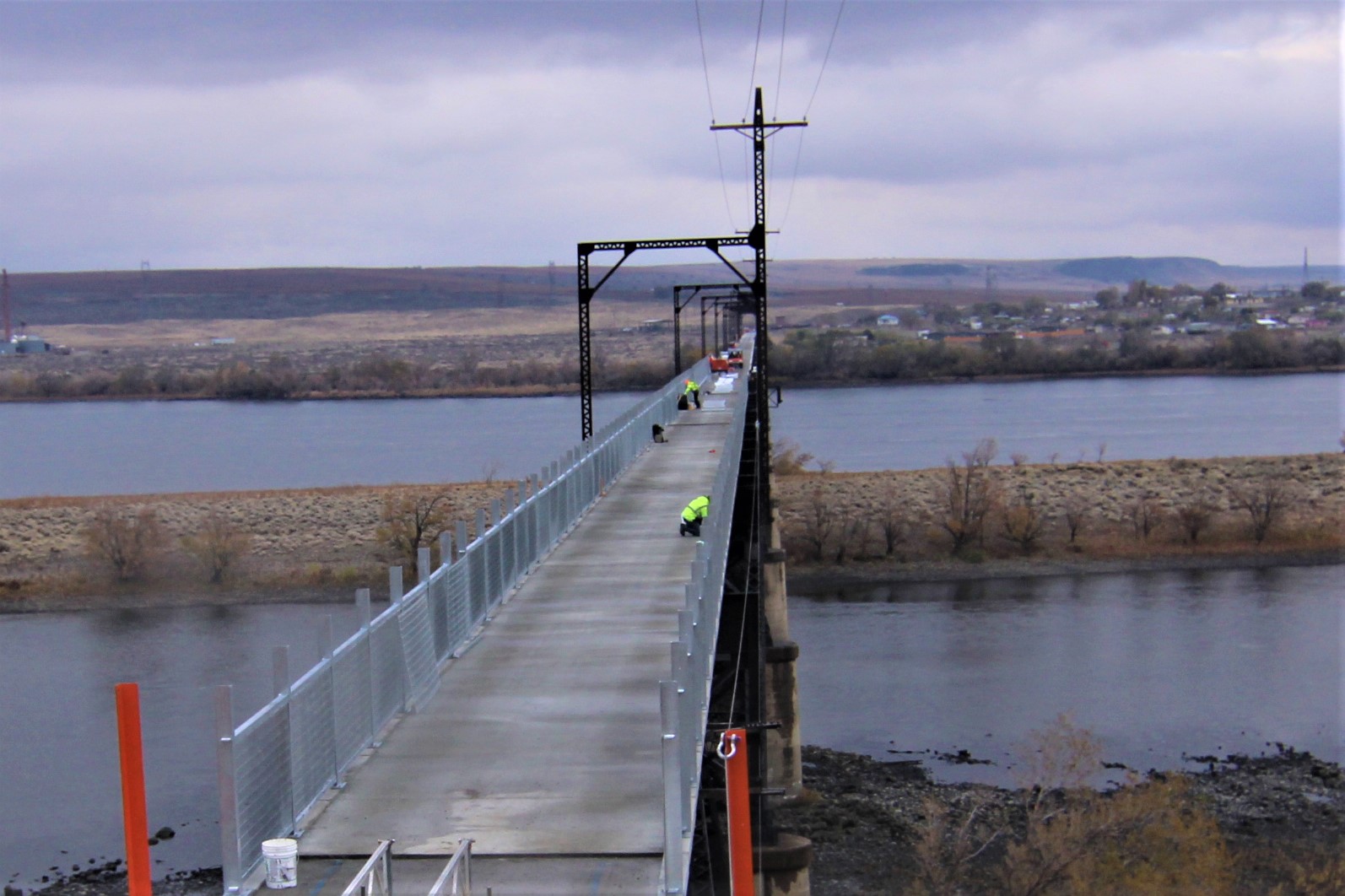 Kline didn’t know a precise date for the opening when we spoke with him in early December, but we will update this post and share the news on Cascade social media.

A scenic and historic landmark, the Beverly Bridge is nearly three-quarters of a mile long and passes almost 70 feet above the river. “Absolutely spectacular” is how Fred Wert, chairperson of the Palouse to Cascades Trail Coalition, describes the Beverly Bridge.

“It is one of the few places where you can ride over the Columbia River that’s not on a highway. It’s peaceful and quiet, with huge terrain all around you,” Wert said.

One of the Most Exciting New Bike Bridges in the Country

“People will come from around the country to use this new bridge, both for short- and long-distance trips,” said Kevin Belanger, manager of trail planning for the national Rails-to-Trails Conservancy. 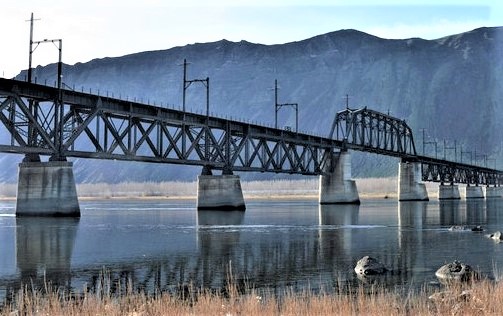 "The Beverly Bridge is one of the most exciting new pieces of bicycle and pedestrian infrastructure in the country, and it shows why Washington is repeatedly ranked the most bicycle friendly state in the nation,” said Alex Alston, state policy director for Washington Bikes. “Our goal is to create cross-state multi-use trails that improve rural economic development, attract bicycle tourists from around the region and world, and allow people to ride through Washington’s magnificent landscapes on off-road routes free of vehicle traffic.”

A grand opening ceremony will be held at the Beverly Bridge later in the year, following the “soft opening” in early 2022. To find the latest information on the opening date, check the State Parks and Palouse to Cascades Trail Coalition websites, as well as the Cascade Blog.

The Palouse to Cascades Trail

The Beverly Bridge project is part of about $10 million of work underway or recently completed on the Palouse to Cascades trail, which at 288 miles long is among the longest rail trails in the nation. The national Rails-to-Trails Conservancy has identified the Palouse to Cascades as a key segment in the Great American Rail-Trail under development from Washington, D.C., to Washington state. 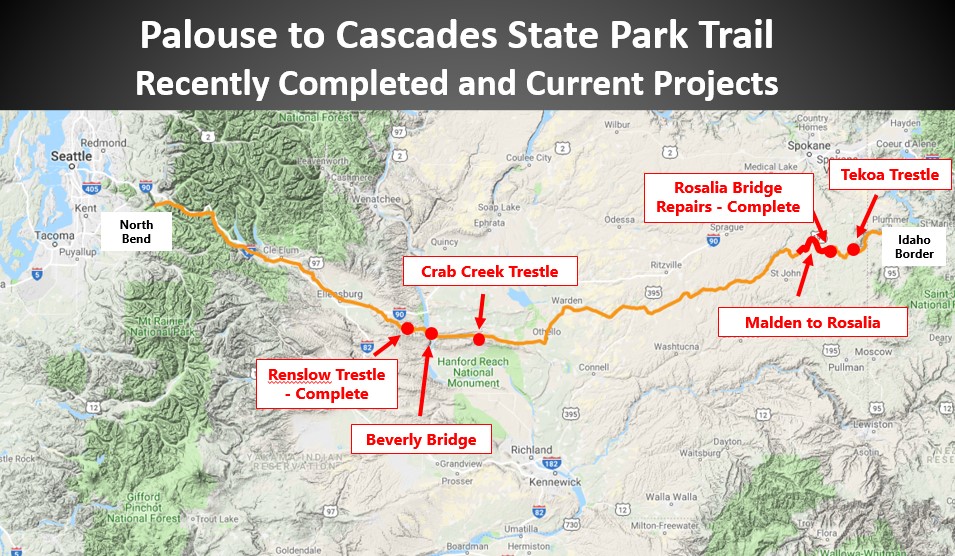 At its westernmost point at Cedar Falls, near the town of North Bend, the Palouse to Cascades trail connects to the 30-mile Snoqualmie Valley Trail. The eventual goal is to connect the Palouse to Cascades to the many trails and bike routes that cross the Puget Sound region, with opportunities to ride a ferry to the Olympic Peninsula and bike all the way to the Pacific Ocean.

Other new construction highlights on the Palouse to Cascades trail include: 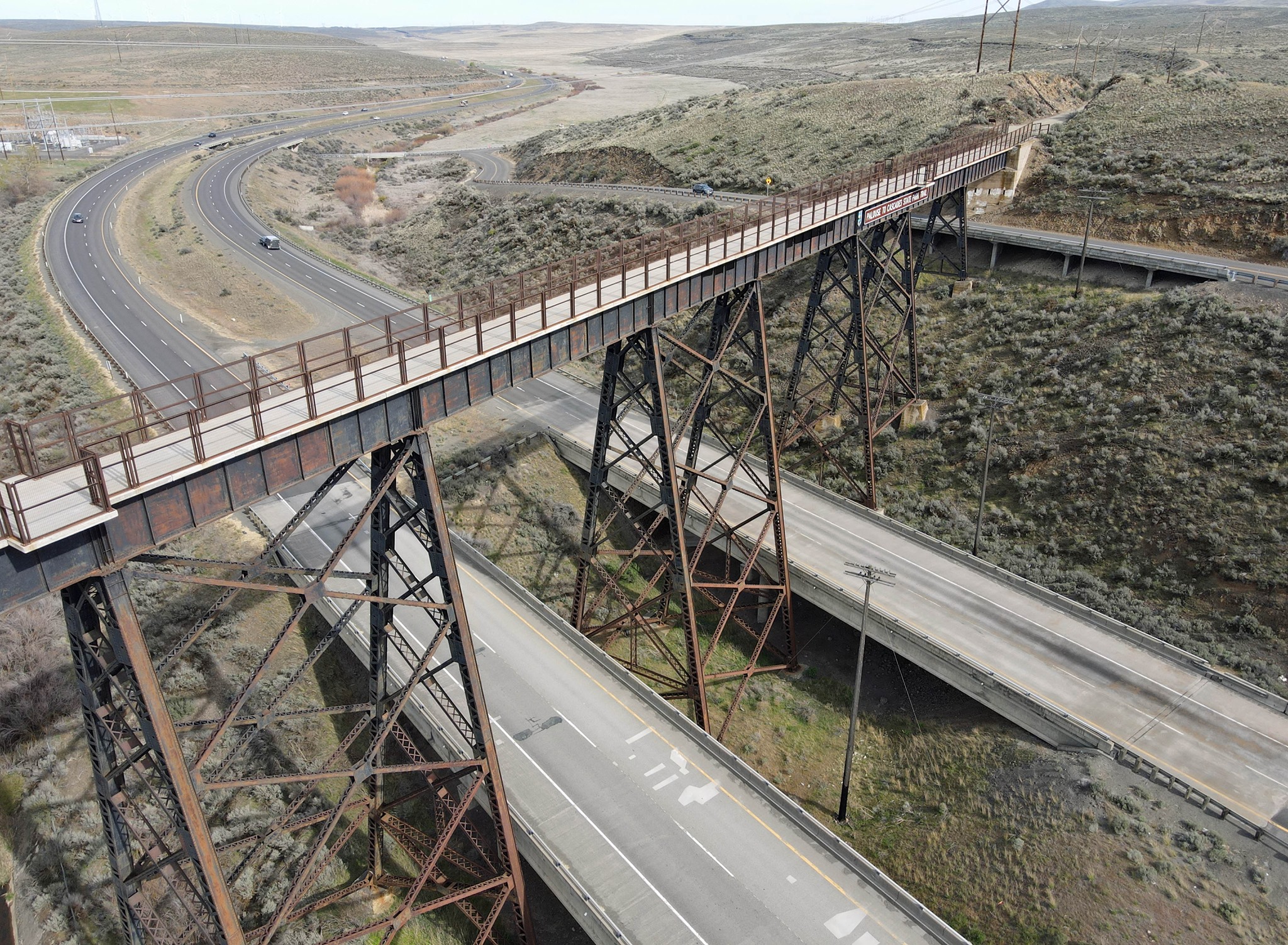 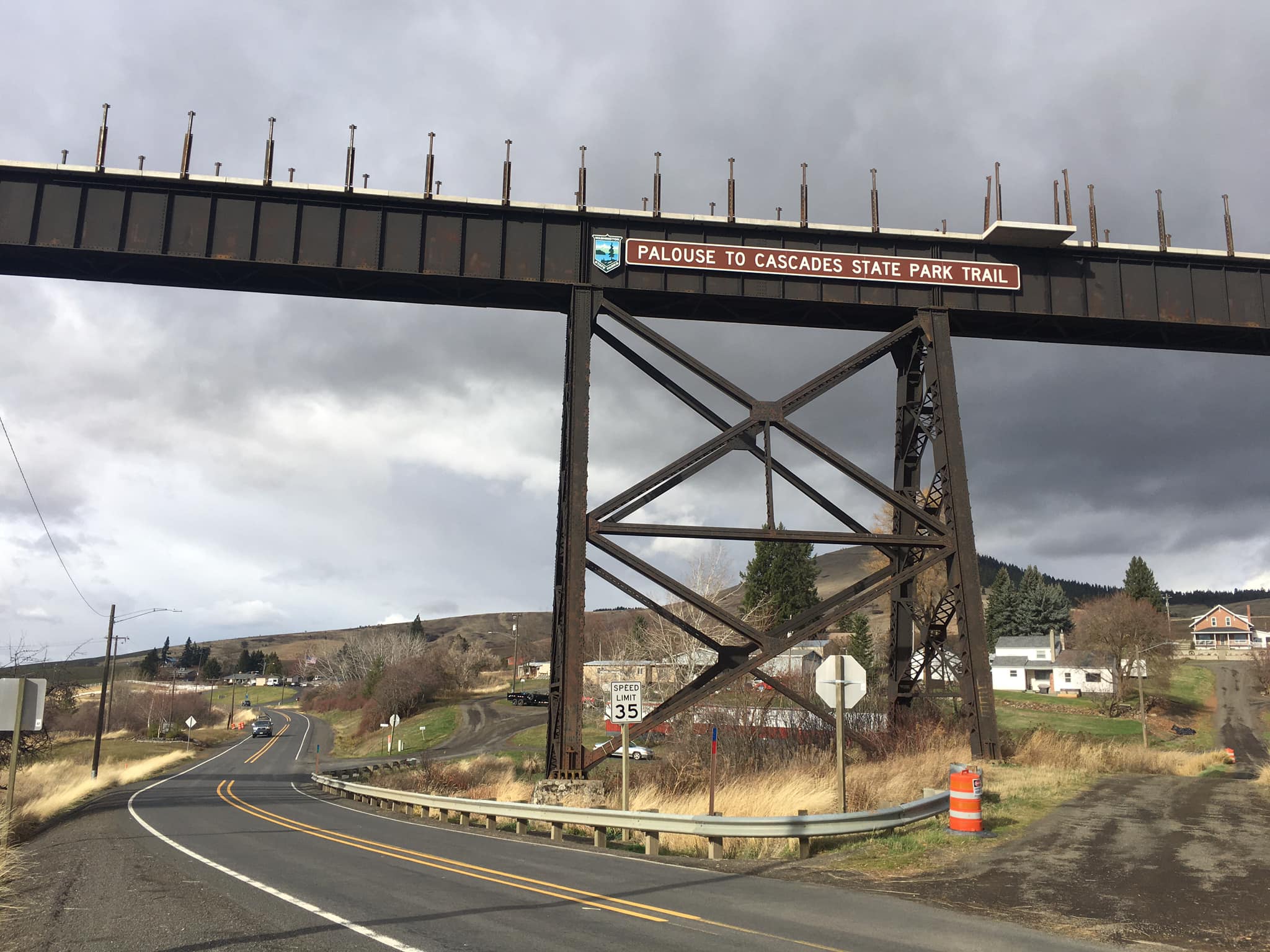 Bike through Tekoa high above the town on the Tekoa Trestle. Photo: Mark Borleske.

To continue progress on these trails, Washington Bikes will support full funding for the WWRP in 2023 when legislators take up the next biennial budget. Until then, get ready to ride over the Beverly Bridge--and watch for our upcoming post about the Willapa Hills State Park Trail. See more photos of the Palouse to Cascades Trail in our story "Pedaling the Snoqualmie Tunnel and Training for the Ride for Major Taylor." 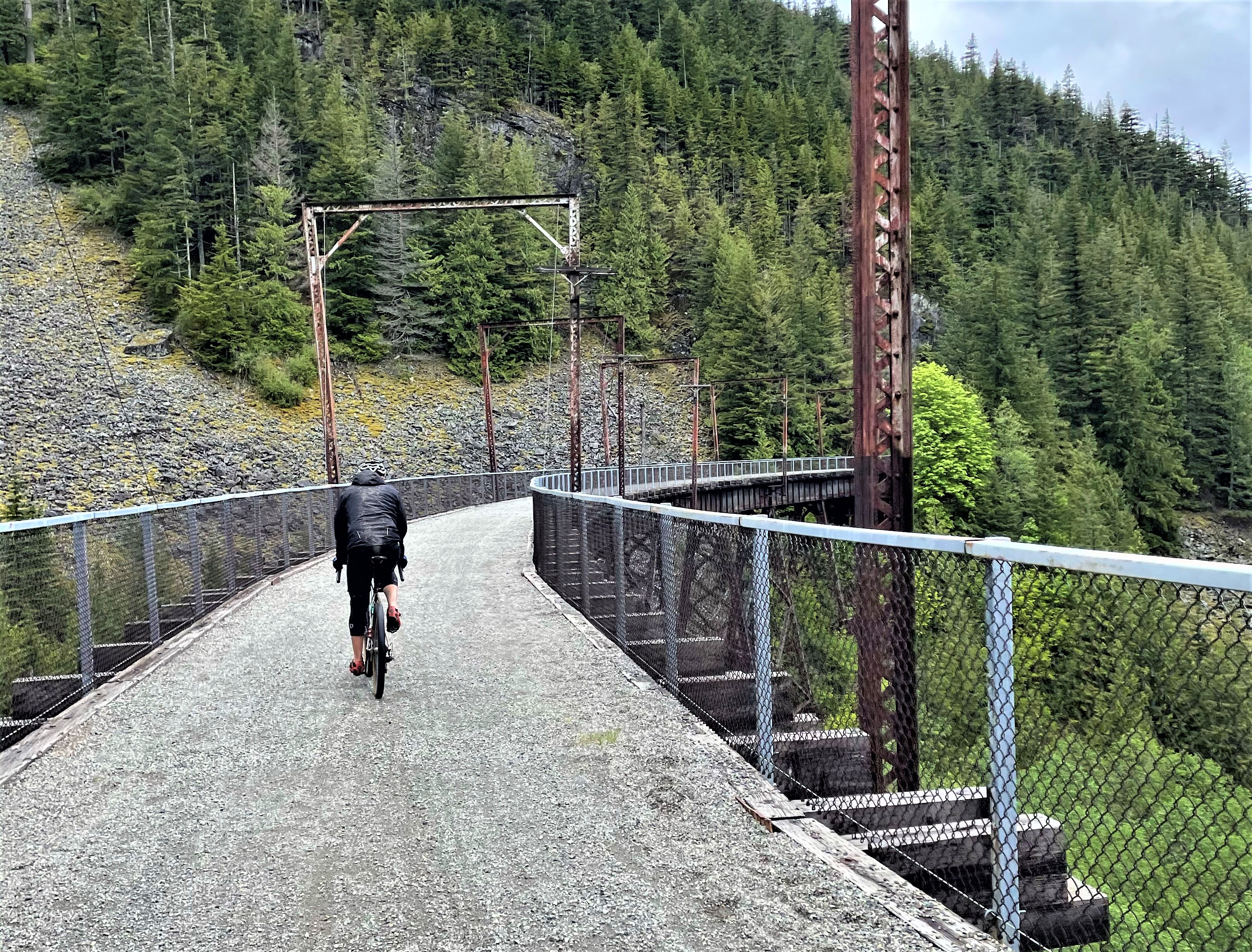 Riding toward Cedar Falls on the westernmost portion of the Palouse to Cascades trail.

Heads up Turkeys, Cranksgiving Seattle is Back!