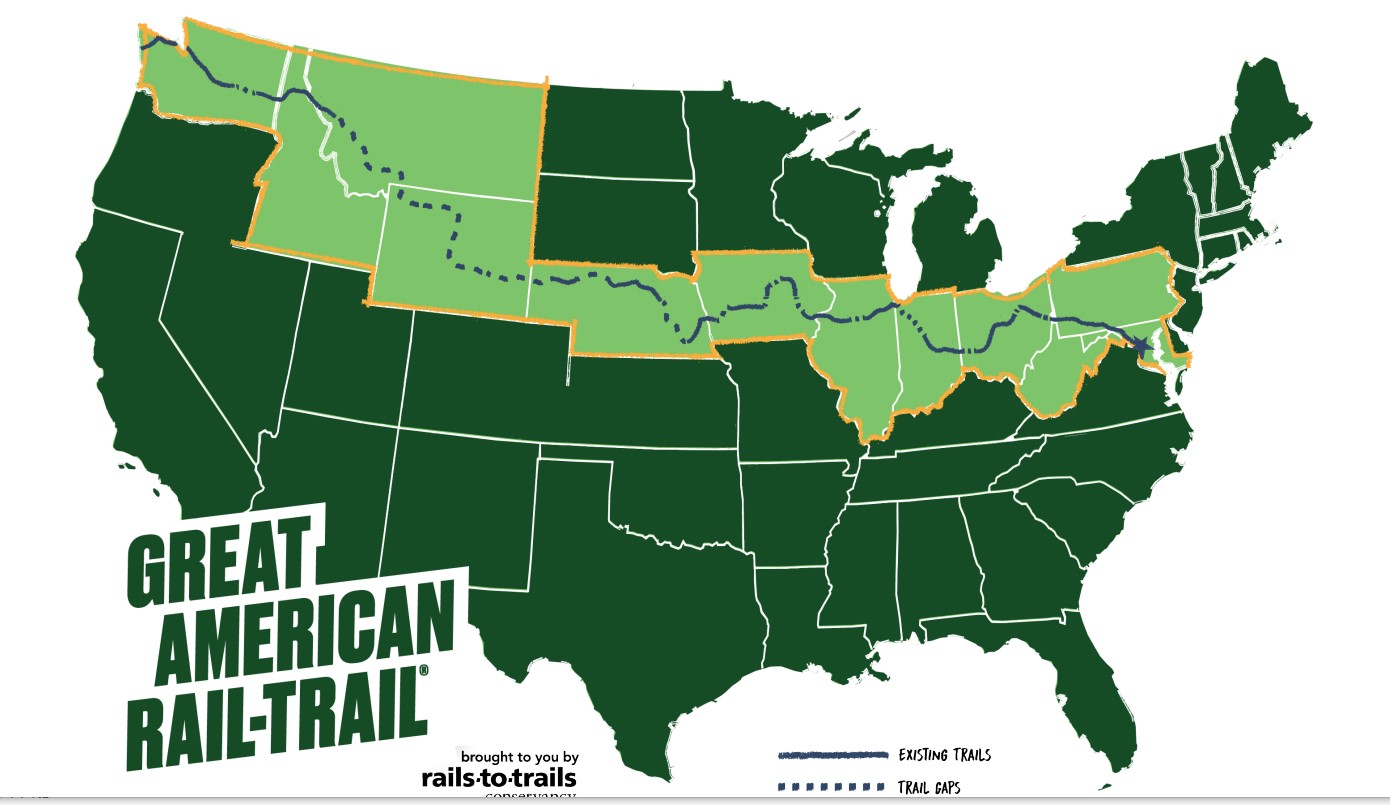 A “huge milestone” is coming for Washington state’s Olympic Discovery Trail and the 3,700-mile Great American Rail-Trail that spans the nation.

In just a few years, people will be able to bike on a new trail from the timber town of Forks, Wash., to the oceanfront tribal community of La Push. The trail connection will provide an economic boost to the region and state by connecting the Olympic Discovery and Great American trails to the Pacific via a new “Western Gateway.”

Construction on the 11-mile segment of paved, multi-use trail from Forks to La Push should be completed within the next three years, says Jeff Bohman, president of the Peninsula Trails Coalition. Building this westernmost segment of the Great American and Olympic Discovery trails will offer people on bikes a car-free, epic start or finish to a bike ride across the Olympic Peninsula–or across the nation. 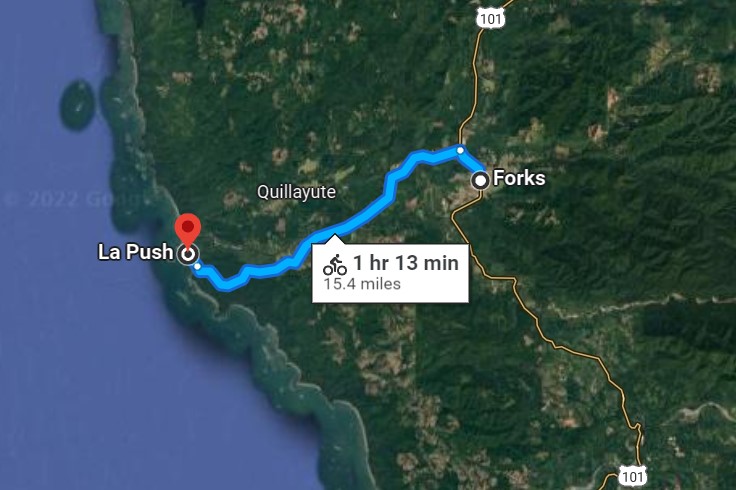 “Completing the Western Gateway will be a huge milestone that connects the Great American Rail-Trail to the Pacific Ocean,” Bohman says.

That’s good news for the state’s economy. Long-distance bike trails not only provide healthy recreational opportunities and adventure. They are a major economic engine.

A recent study says the 3,700-mile Great American Rail-Trail, which is more than halfway built, will generate about $25 million in spending and 1.6 million trips within Washington state when completed. 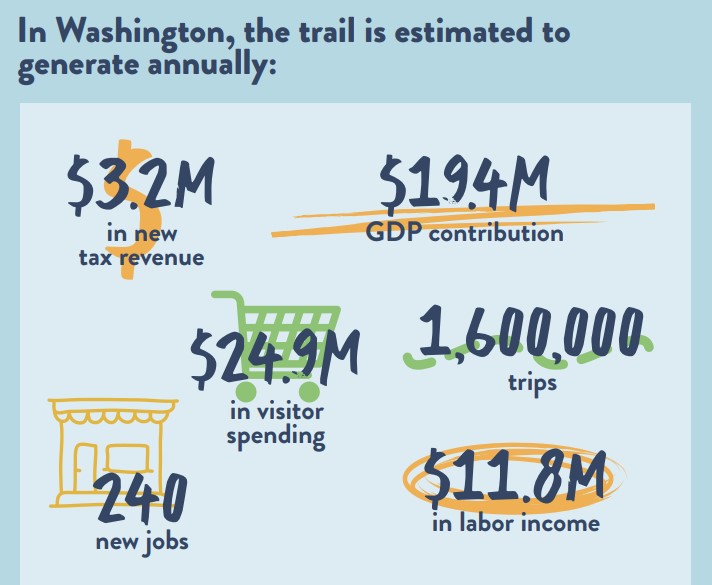 “The return on investment is huge,” says Kevin Belanger of the Rails-to-Trails Conservancy, a nonprofit that is leading the effort to create the Great American Rail-Trail. “People on bikes buy food and water and supplies and lodgings, and there are many towns that need economic development that would benefit.”

People from around the world, as well as the 50 million Americans who live within 50 miles of the Great American, will come to bike, walk, ride horses, and explore America’s diverse landscapes when the trail is completed, Belanger says.

The Great American crosses 12 states and will be the nation’s first cross-country biking and walking trail when completed. It is more than halfway completed, with about 88 gaps to be filled, including some in Washington state.

A Bike Trail Across Washington

Washington state’s longest segments of the Great American include the 289-mile Palouse to Cascades State Park Trail, which travels from the Idaho border to the Puget Sound region, as well as the Olympic Discovery Trail. 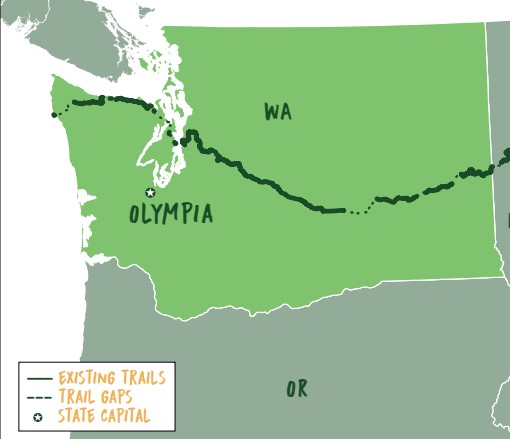 About 92 miles of the Olympic Discovery Trail are completed along a route that will eventually be 135 miles long, Bohman says. “Trail segments are being added almost every year.”

Progress is also continuing on the Palouse to Cascades. In central Washington, the state opened the Beverly Bridge, a key trail link over the Columbia River. The 3,000-foot bridge, which opened in April to people biking, walking, and riding horses, unites the eastern and western halves of the Palouse to Cascades, the longest rail trail in the nation. 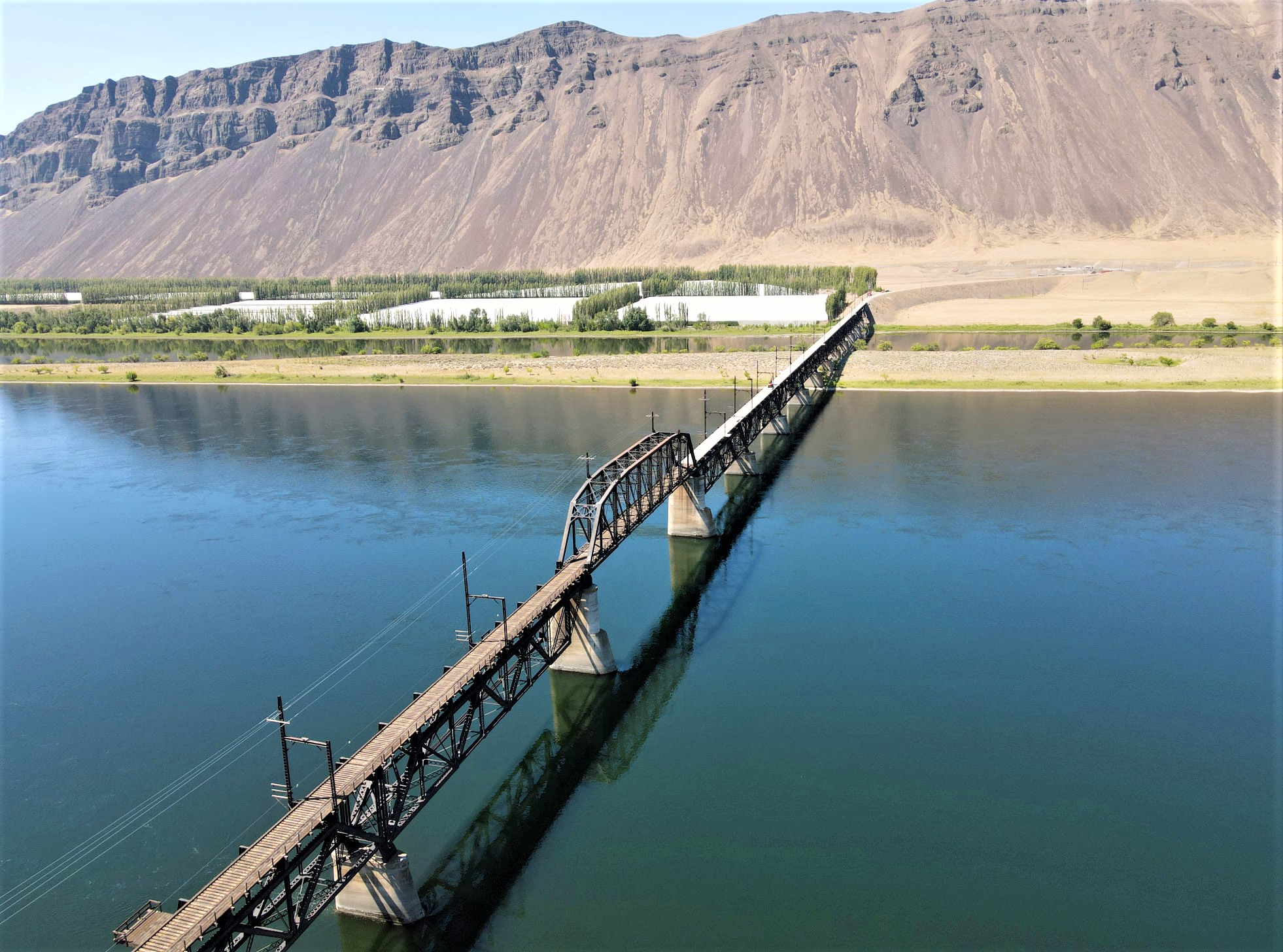 Washington Bikes was instrumental in securing state funding to complete the Beverly Bridge. Washington Bikes advocates in Olympia for full funding of the Washington Wildlife and Recreation Program because it pays for trail projects.

From Seattle to the Pacific

From the western terminus of the Palouse to Cascades trail in Cedar Falls, a variety of trails in King County enable people on bikes to pedal into Seattle. Connecting to the Olympic Discovery Trail and the Pacific is the next big challenge.

Trail planners are now “route scouting and exploring connections” to get from the Hood Canal Bridge to the Port Townsend area and the Olympic Discovery Trail, Bohman says. The Peninsula Trails Coalition has identified four potential trail routes, he says.

Progress on the Olympic Discovery Trail

The Jamestown S’Klallam Tribe is now working to complete a section of trail paralleling U.S. Highway 101 near Sequim Bay. “It has been a singletrack but the tribe is upgrading it to a paved trail with gravel shoulders,” Bohman says.

A big priority for the Peninsula Trails Coalition is closing trail gaps between Port Townsend and Sequim. From Port Townsend, people can now pedal to the Four Corners area on the Larry Scott Trail. But from here, bikes must travel on a dangerous stretch of SR20 to continue westward. Bohman urges people to avoid this stretch of highway.

To eliminate these trail gaps, the Peninsula Trails Coalition joined Jefferson County to complete a study that has identified an 11-mile trail route from Four Corners to Discovery Bay. The county adopted the study and hopes to fill this gap in three phases, starting with a three-mile segment that will connect Four Corners to Anderson Lake State Park, Bohman says, with construction to be completed in two to three years.

“Further west in Jefferson County, we are looking at an abandoned segment of the old State Highway 9 that was discontinued when Highway 101 opened between Discovery Bay and Sequim Bay,” Bohman says.

Building trails takes time. Funding must be obtained, routes must be studied, and agreements must be reached with property owners, government entities, and tribes. “It’s the hardest trail sections that get left for last,” Bohman says.

The Peninsula Trails Coalition was founded 34 years ago with a mission to build and maintain the Olympic Discovery Trail. It has helped complete 90 miles so far and hopes to have 110 miles in four to five years, Bohman says. 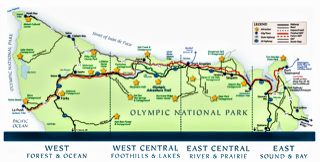 “Our pledge to communities and the 14 jurisdictions we pass through is: ‘We will maintain and take care of the trail if you build it.’ We donate thousands of hours of volunteer work to take the load of maintenance off the shoulders of communities,” Bohman says.

Cascade and Washington Bikes are proud to be a part of the large coalition of people committed to building safe places to bike, walk, and roll across our state

“Cascade and Washington Bikes salute the hard work of the Peninsula Trails Coalition to make Washington state’s Olympic Peninsula one of the premier bicycling destinations in the nation,” says Lee Lambert, Cascade and WA Bikes’ executive director. “Long-distance bike trails not only boost our economy, they improve the quality of life for all Washington residents.”

Watch the video, The Olympic Discovery Trail: Connecting Opportunity on the Olympic Peninsula