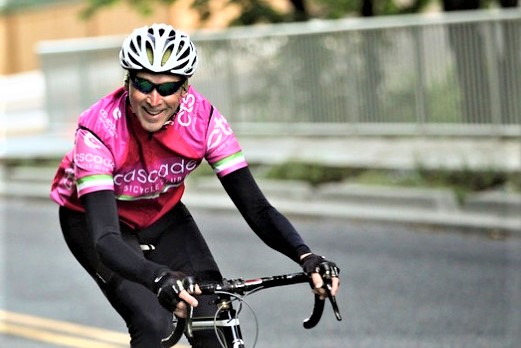 Flying and smiling during Flying Wheels, and with Karin in Italy atop this post.

Jeff Powers, Cascade Bicycle Club’s 2021 Volunteer of the Year, has led a life of adventure both on and off his bike.

As a Navy officer and submariner, Powers descended to the bottom of the Atlantic Ocean to explore the wreckage of the Titanic in 1986. As a submarine Executive Officer, he traveled to the North Pole to conduct scientific experiments in the Arctic Ocean.

Upon retiring from the Navy, Powers bicycled solo across the United States, stopping to explore many national parks.

As a Cascade volunteer, Powers’ is a bonafide superhero. He leads 30-40 Free Group Rides annually, chairs the Rides Committee, assists with the Cascade Training Series (CTS), and more. In the early days of the pandemic, Powers helped the 10-member Rides Committee develop its COVID-19 safety protocols that helped Cascade begin hosting rides and events safely again.

“Jeff is an incredible person,” says Cascade’s Rides Program Manager Davíd Urbina, who works closely with Powers. “He shows up because he cares about every single Cascade rider having a good experience. We couldn’t do what we do without volunteer superheroes like him.”

We are highlighting Powers’ story as part of a campaign to encourage more individuals to Volunteer for Cascade and give back to all that bicycling has given to them. Powers says volunteering is a way to spread his love of cycling and get more people onto bikes. “It gives you a sense of purpose,” he says.

Volunteer opportunities abound. You can lead Free Group Rides, teach and empower youth with bicycling and leadership skills as part of our Major Taylor Project, or deliver and rescue food + essential supplies as part of our Pedaling Relief Project. 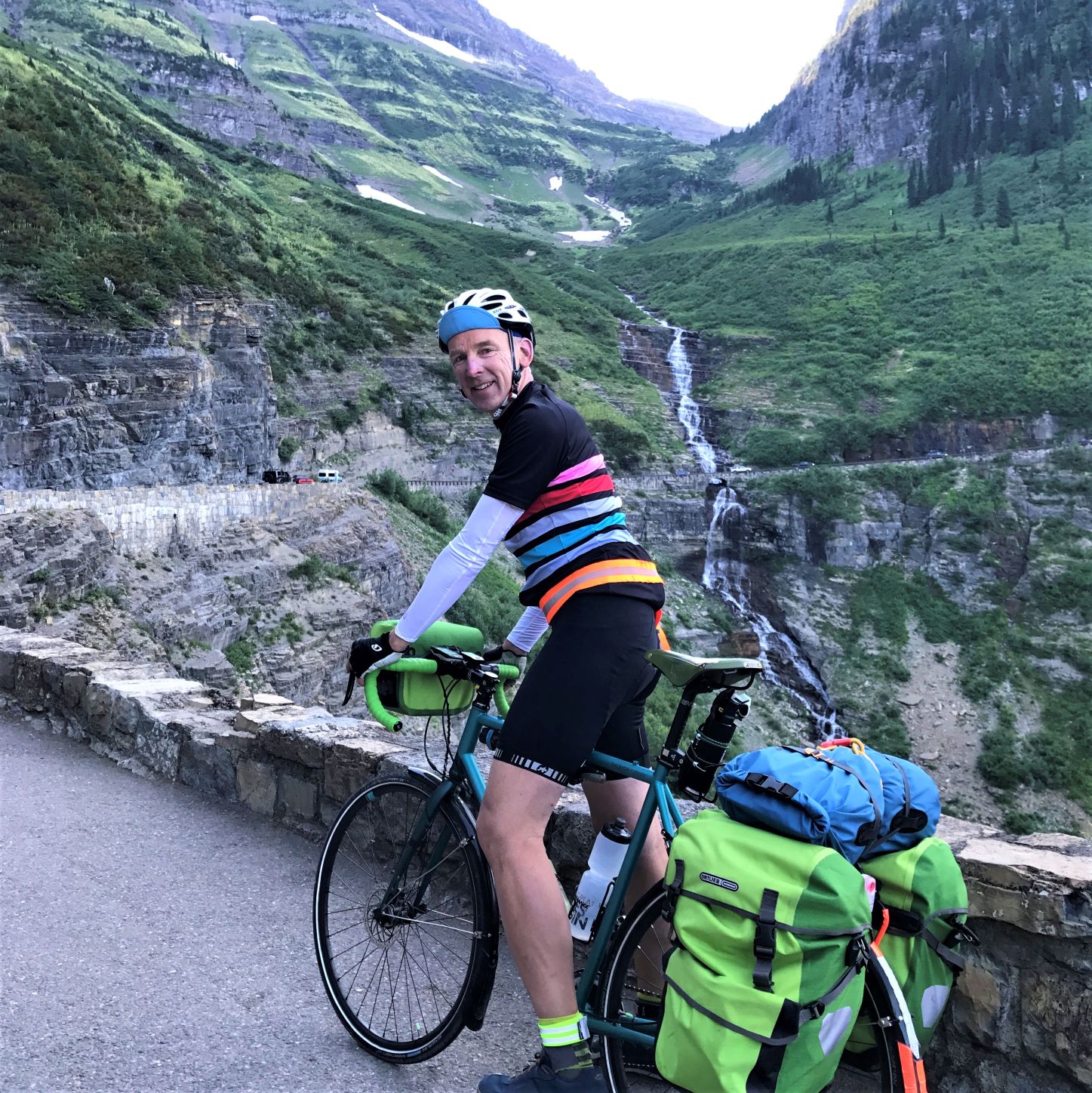 Events and major rides offer opportunities to volunteer at food stops, aid stations, and start and finish lines. Some volunteers prefer to stuff registration packets that are mailed to our ride participants. Want to advance bike advocacy initiatives and push for more bike infrastructure? Volunteer with our policy team. The development team has opportunities to help with fundraising events, and the communications and marketing team is always looking for talented photographers and videographers.

There are perks. Volunteers earn credits that they can spend on event registrations and membership renewals. Volunteers also get swag and free cycling gear at Cascade’s annual Volunteer Appreciation Party.

“It’s not just about riding,” Urbina says. “A few years ago our Volunteer of the Year didn’t ride a bike, but she enjoyed making friends and seeing other people riding bikes.”

Cascade asked volunteers why they donate their time. Here are a few responses: 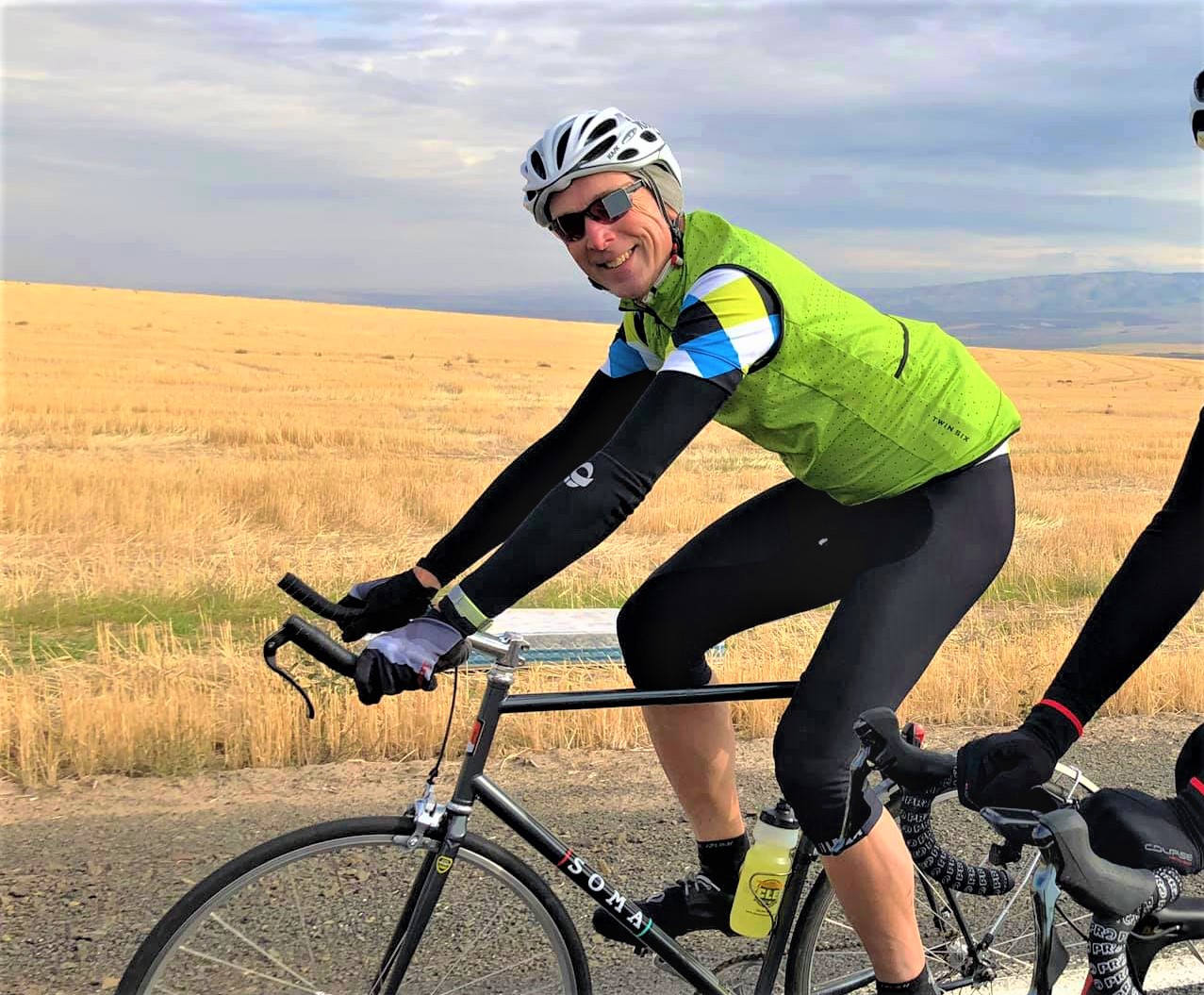 Riding with Cascade in Walla Walla.

Cascade’s Free Group Rides program hosts more than 2,000 rides per year, and it is one of the most common entry points for new volunteers. Due to attrition during the pandemic, Cascade is seeking new volunteer ride leaders from diverse backgrounds to create and host unique rides. Volunteer ride leader Bob Svercl, for instance, enjoys creating themed cultural and historic rides, including his “Rise Up and Ride Up” queer history tour of Seattle.

“I like doing Free Group Rides that stop at bakeries,” Powers says. He and his wife, Karin, frequently explore Seattle by visiting new bakeries. Last year, he pedaled across the city to find the best butter croissant–a bike adventure that was featured on TV station King 5.

Exploring the Titanic and Bicycling on a Submarine

Before he was a volunteer, Powers was a lifelong bike commuter. He rode bikes since childhood, pedaling to school and college, and from his home to work once he entered the Navy.

In 1986, while a young Naval officer, he got the opportunity of a lifetime. “My captain asked, ‘Hey Powers, do you want to go see the Titanic?’ I thought it was a joke.”

It wasn’t. Chosen to be part of a three-person crew in a deep-water submersible, Powers traveled two-and-a-half miles down to explore the wreckage of the Titanic, which had been discovered the year before.

“The submersible was cool because it had three windows, so I had my own window. On a regular submarine there are no windows,” he said. He saw an ocean floor littered with artifacts from the luxury liner, which sank in 1912. “We saw champagne bottles, plates and cups, and lots of coal because it was coal powered.”

When Powers was given command of the submarine USS Florida, stationed on the Kitsap Peninsula, he brought his bike onboard. But first he had to remove the wheels and seatpost so it would fit through the hatch.

How do you ride a bike on a submarine? Very carefully. He set up the bike on a stationary trainer in his cramped, 64-square-foot room so he could stay fit while at sea.

Powers fell in love with recreational road riding when stationed in Italy, where he explored the scenic countryside with Italian friends. When stationed in Hawaii, Powers joined the local bike club, Tradewind Cycling Team, and went on many group rides. 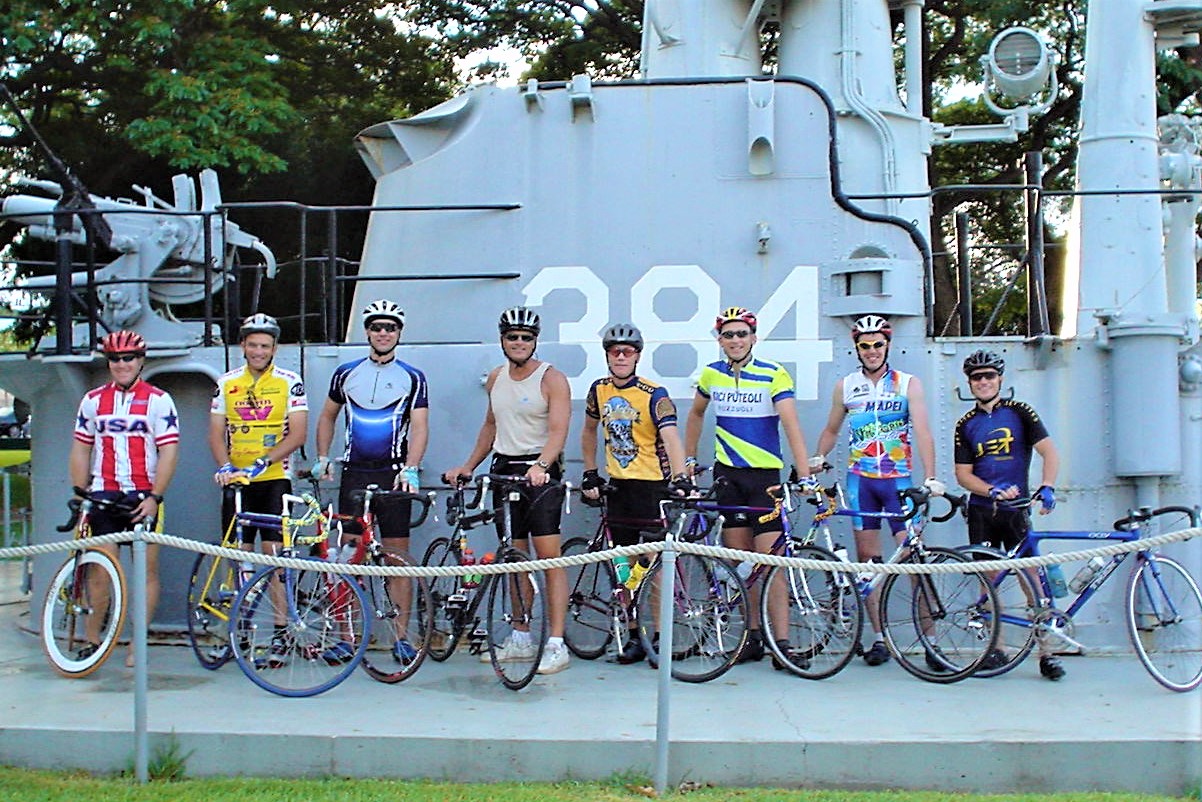 Powers, third from right, with riding buddies in Pearl Harbor.

“As a naval officer, I had to move every few years, and using a bicycle was a great way for me to explore my new location,” Powers says. “I’ve learned so much about Seattle from bicycling.”

Powers became aware of Cascade in 2000, when a friend encouraged him to ride the 206-mile Seattle to Portland. He has since done STP 11 times, even flying to Seattle from Hawaii to complete the ride during his time living there.

In 2012, Powers moved to Seattle and began joining Cascade’s Free Group Rides to explore the city. The next year he became a Cascade ride leader and started leading his own rides. That led to joining the Rides Committee, and three years ago he became the committee chairperson. 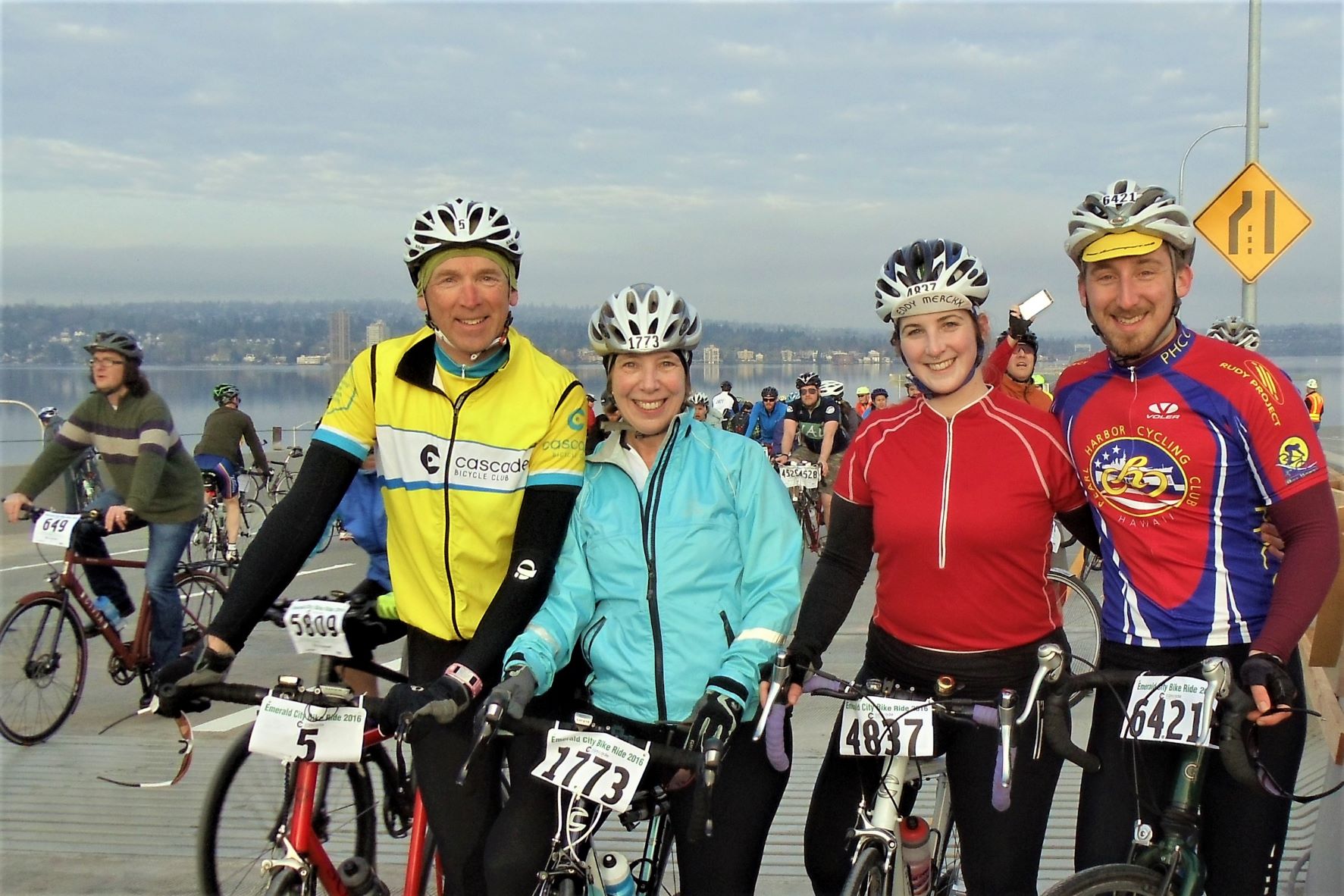 With wife, Karin, and kids Rachel and Dillon during Emerald City Ride.

As head of the 10-person Rides Committee, Powers spent countless hours developing COVID-19 safety protocols to ensure the rides were safe and met all local, state, and CDC guidelines. Though the protocols shifted frequently as guidance was updated, Powers and the committee adjusted procedures as necessary and were able to host safe rides throughout the pandemic.

Those protocols helped inform Cascade’s own COVID safety guidelines that have led to numerous bike events, including the 2020 Chelan Tour Lite and last year’s 800-plus-person Flying Wheels. “We have learned that outdoor activity is pretty safe, and people need that exercise and time outdoors for their overall wellness.”

When not volunteering for Cascade, Powers likes to explore destinations near and far by bike. In 2017, he completed a 4,300-mile solo cross-country bicycle trek from Seattle to New York City.

“Working with the Cascade staff is great, and the cadre of people who like to ride bikes is fantastic. Bicycling energizes my life,” Powers says.