“Lewis is a quality human, with a good heart,” says his friend Reginald “Doc” Wilson.

Rudd is a 29-time Seattle to Portland finisher who has been riding bikes seriously since the mid-1980s. When the pandemic forced Cascade to cancel its in-person STP for the second consecutive year, Rudd hatched a plan.

On July 17, the same day that Cascade kicks off its Kaiser Permanente Seattle to Portland Virtual Challenge Presented by Alaska Airlines, Rudd and a largely Black and multi-racial team of a dozen riders will pedal to Portland over two days along the 206-mile STP route. 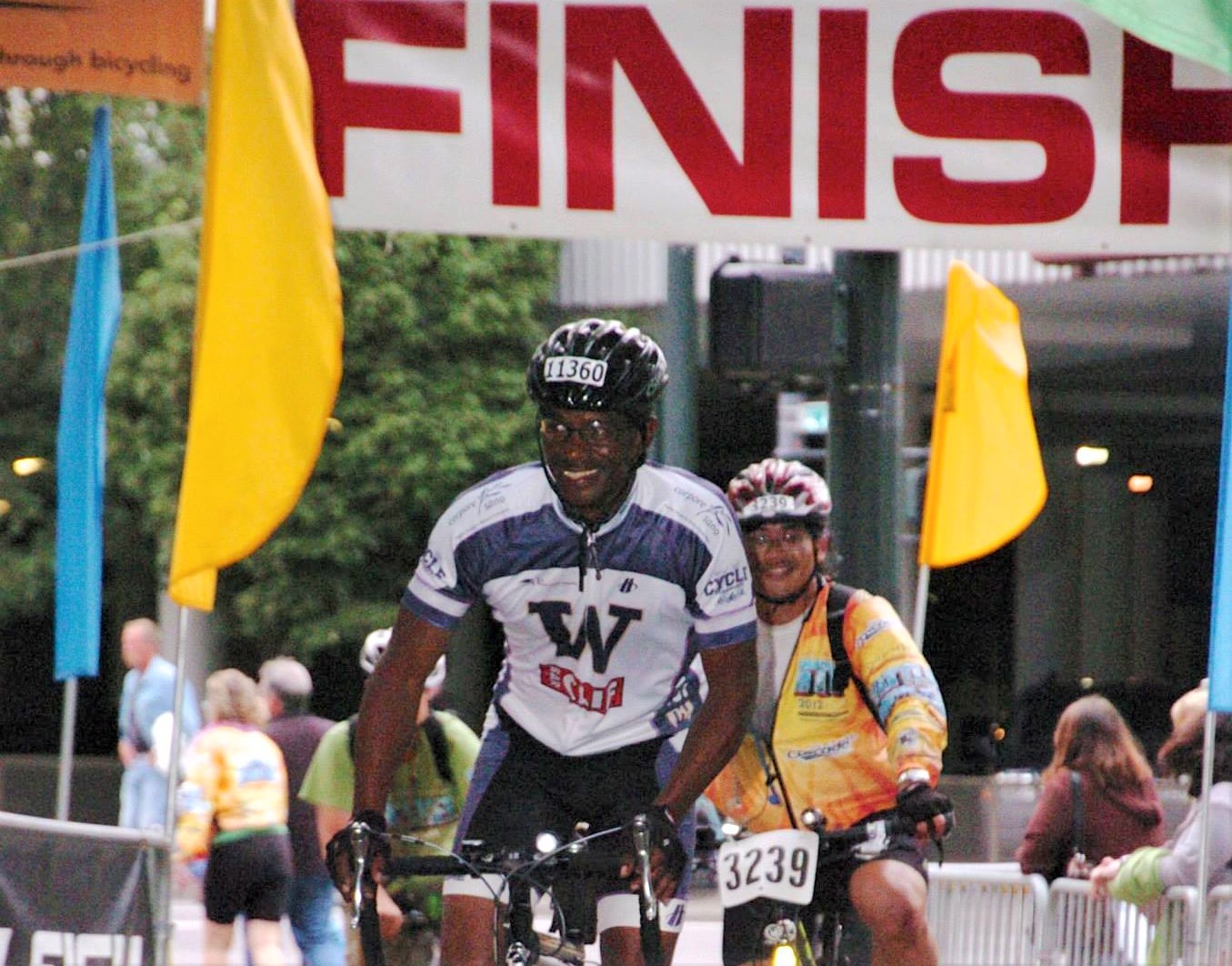 All smiles after one of his 29 STP finishes.

While it won’t be an official STP, Rudd is eager to complete the route for a 30th time. “I was trained and ready to go last year,” says Rudd, who remains fit and trim at age 66. “I’m very excited to get my 30th.”

Rudd has been training and coaching his crew since April, gathering for Saturday morning rides and recently completing Cascade’s 100-mile Flying Wheels Summer Century. Most of the riders in Rudd’s training group are 50 and older, with one rider over age 70.

While most of them are fit, few of his friends had previous experience riding in a pace line, where riders line up in a tight formation and draft one another. “Then you can really fly and increase your efficiency,” he says.

Rudd enjoys coaching. “I’ll be shouting out instructions during a ride: ‘Get that wheel, close that gap,” he says. He preaches efficient shifting, and pedaling with a consistent cadence. His team members say they are happy to support Rudd, and they like the diversity of the team. 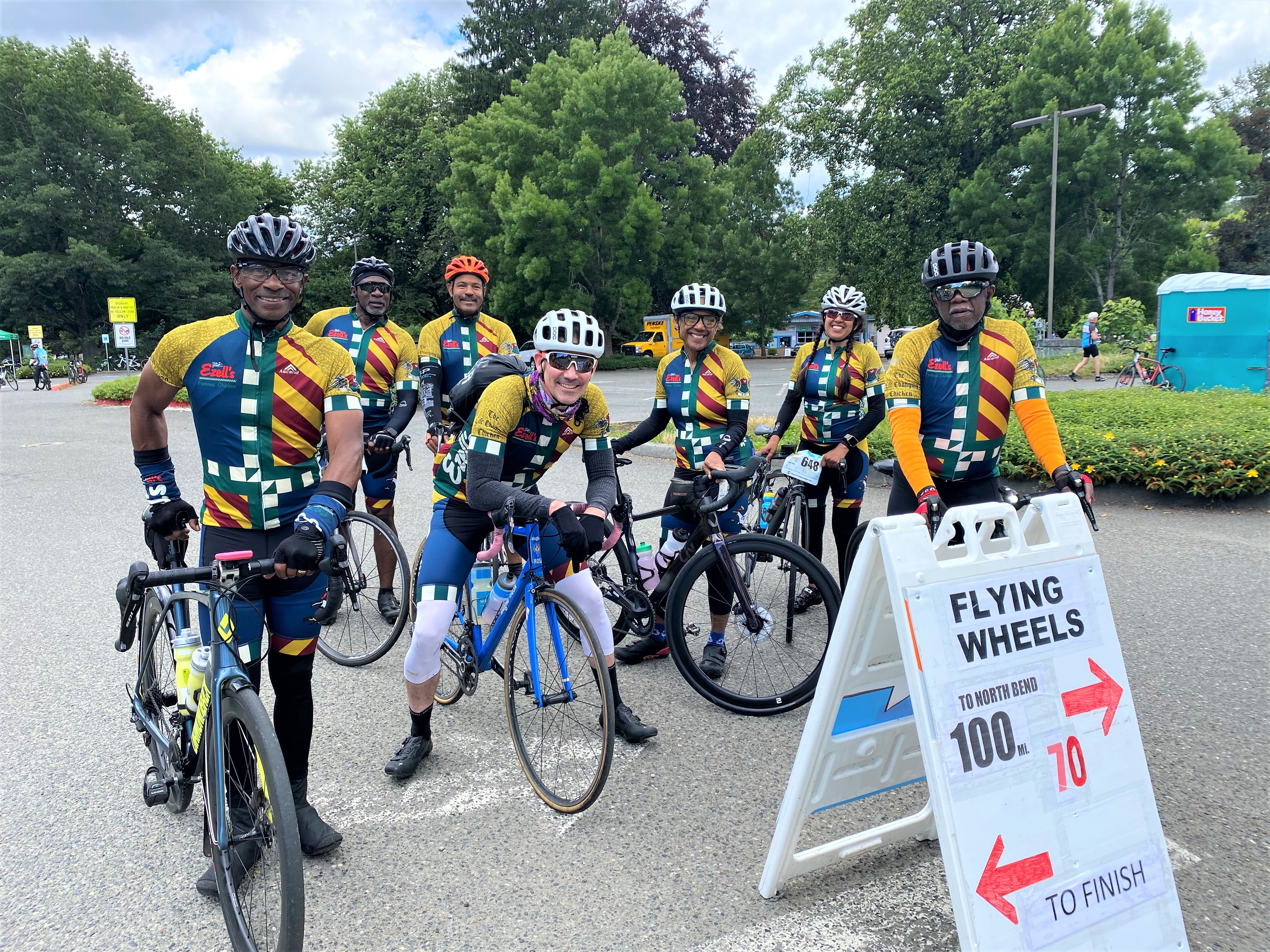 Rudd with some members of his training squad during Flying Wheels. "Close those gaps!"

“It’s male and female, people of color, any friends of Lewis’,” says Timothy Fields, a Seattle Police detective who rides with Rudd. A volunteer with Cascade’s Major Taylor Project, Fields has ridden STP 11 times himself. Bicycling is a way for Fields to bond with and meet other Black people who ride--and help show that bicycling is open to people of all races.

Memories of STPs Past

Rudd and his wife, Jackie, took up cycling seriously in 1984 after a friend invited them on some rides and helped them pick out bikes and cycling gear. “It was great exploring different parts of the city and different areas in the state,” Rudd says. 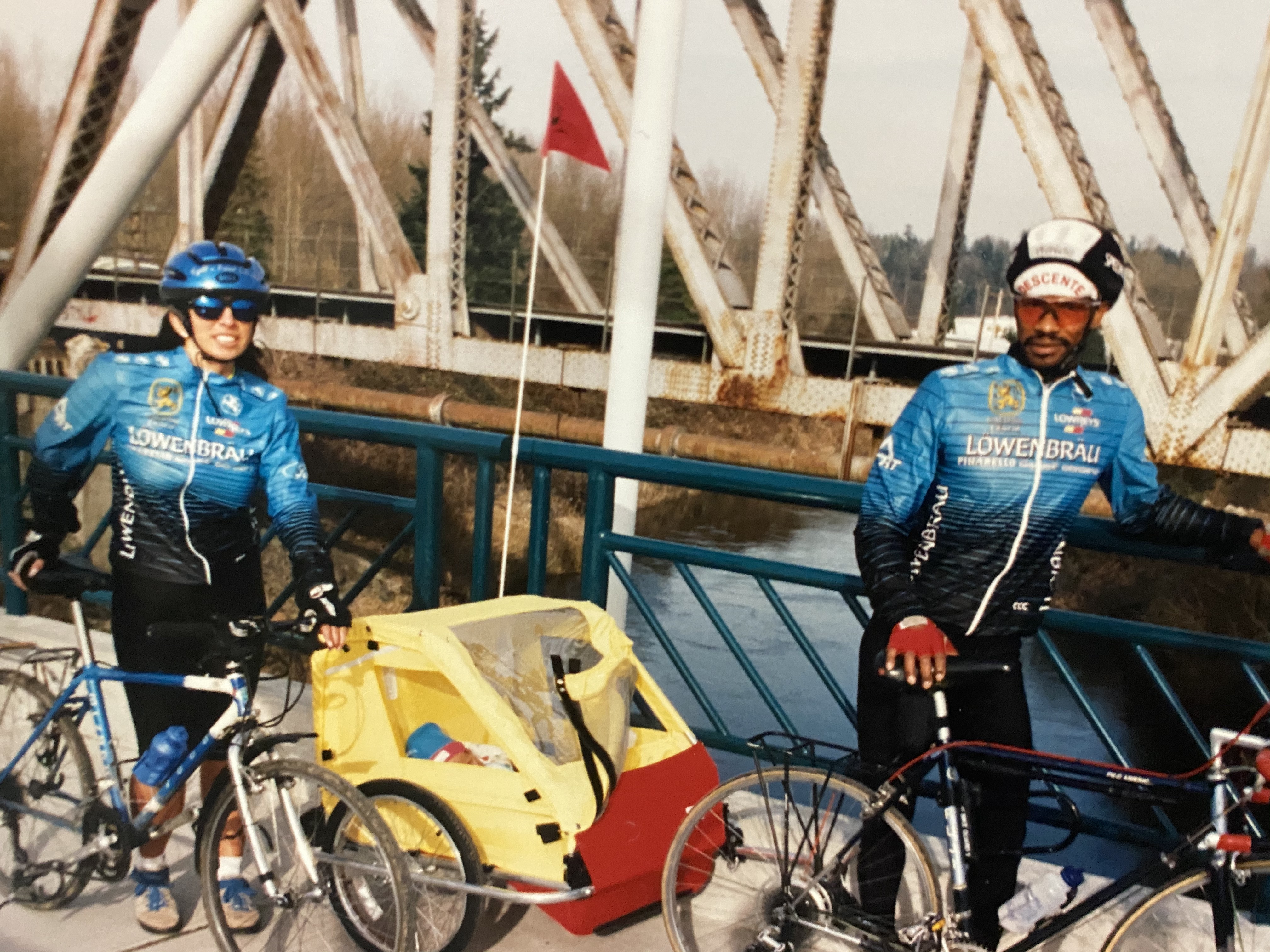 In the fourth year they did their first one-day STP, a tradition they kept for the next 14 years. “We always had a goal of finishing before 6 p.m. Twelve hours on the bike, 206 miles, leaving at 4 a.m.”

After 18 years, Jackie “had enough,” Rudd says, joking that she may have tired of his coaching. Jackie remains a strong rider, training daily on her exercise bicycle, he adds. 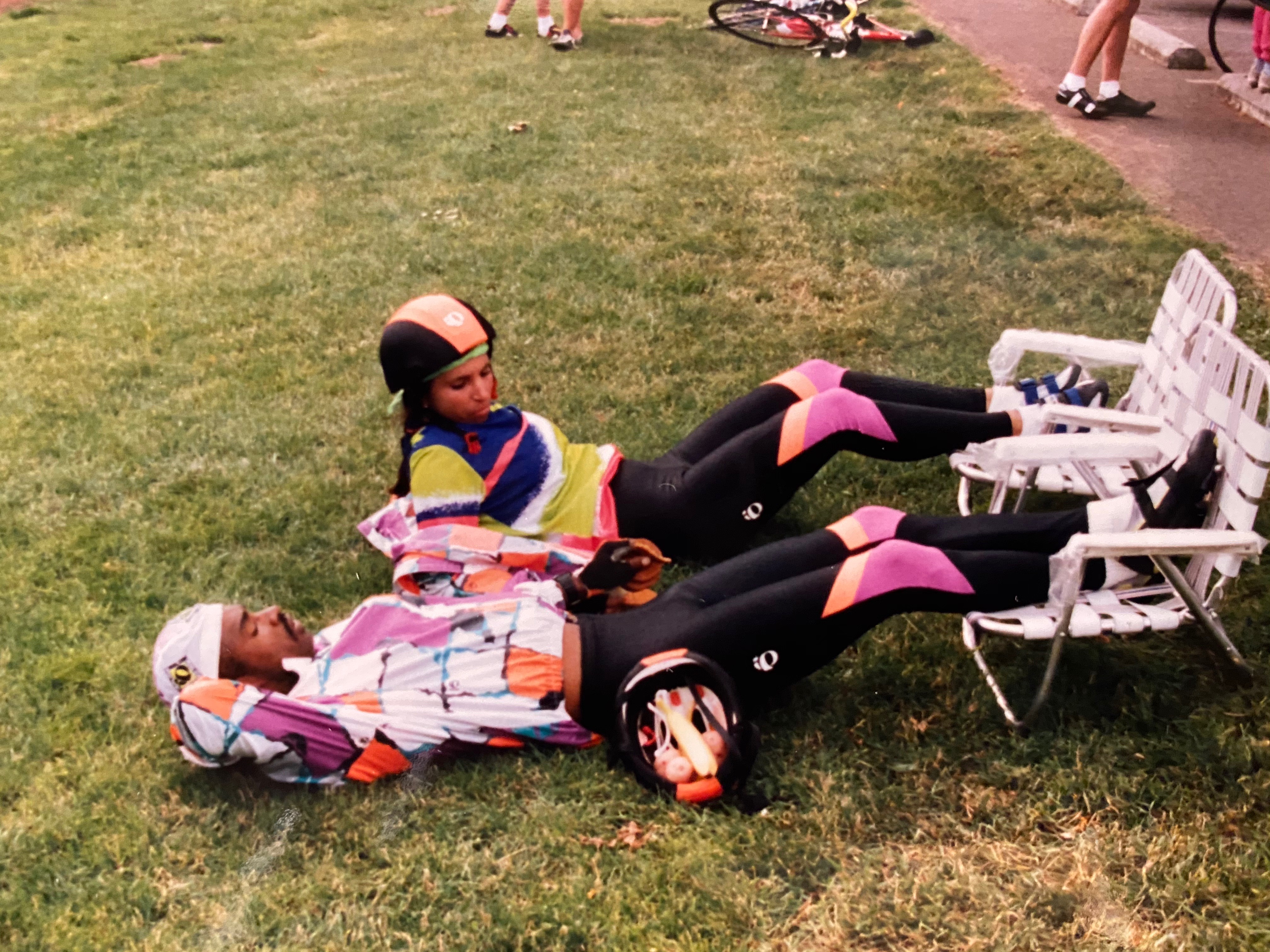 Lewis and Jackie rest their legs following one of their joint STPs. After 18 years, she put her foot down.

Asked about his memories of his 29 STPs, Rudd recalls being in peak form one year and averaging about 20 miles per hour. “Man, I was really flying that year. It felt good.”

Then there are the colorful and matching cycling outfits of the 1980s, the families riding STP together, and the riders of varying abilities on the course. “Sometimes you’d see guys with blue jeans, riding heavy mountain bikes with those big knobby tires.” 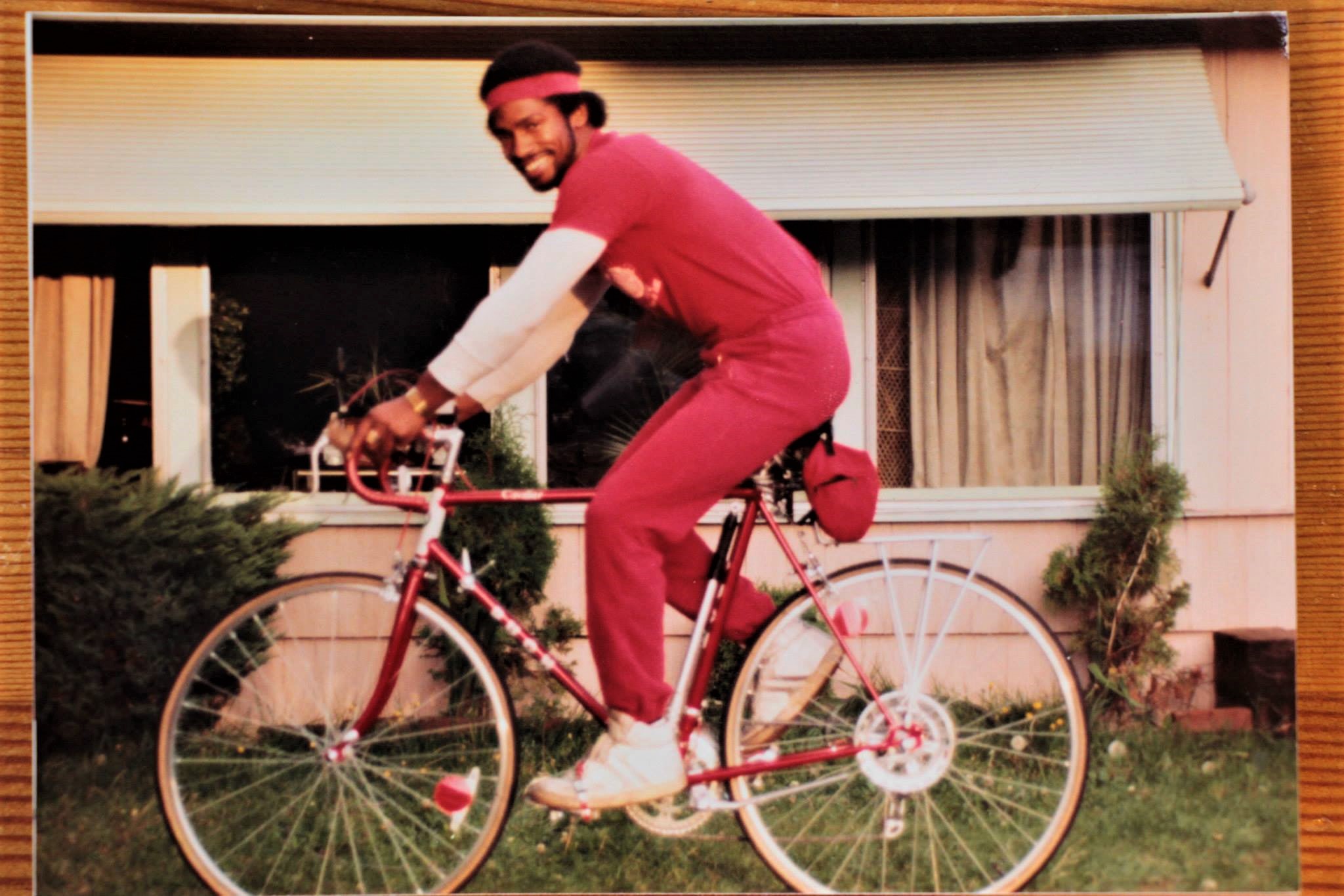 Lewis looking red hot in the '80s on his Puch roadbike with downtube shifters.

Rudd wishes he’d kept some of his old bikes, particularly a red Puch “Cavalier” from the 80s, which he’d love to still own “for sentimental purposes.”

Rudd is also a devoted roller skater. “It’s part of my training,” he says. He met Jackie while skating, and prior to the pandemic they skated regularly at the Pattison’s West rink in Federal Way. With the relaxation of COVID-19 restrictions as more people get vaccinated in the United States, he is eager to resume skating again.

One year Rudd stayed out late roller skating the night before STP and didn’t get to bed until 2 a.m. “I wasn’t sure if I could ride it, but my house is along the route and at 4 a.m. I woke up and heard bikes going by. By noon I was in Centralia. That was when I was 60 years old.” 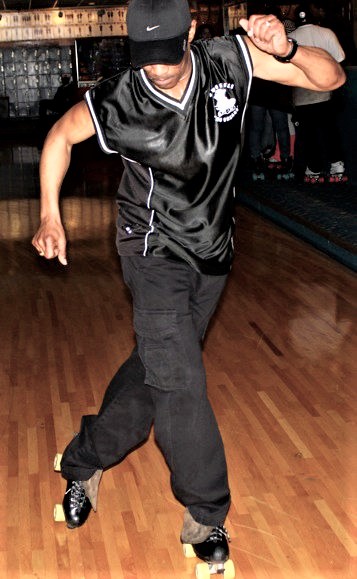 "U Can't Touch This." Lewis skating backwards and doing some STP "training."

Rudd grew up in Texas and moved to Seattle after serving in the military. In 1984, he and his childhood friend Ezell opened their restaurant in Seattle across from Garfield High School. From five employees that first year, Ezell‘s has expanded to multiple locations and now has more than 325 employees. His brother and sister are actively involved in the business.

Rudd is active in the Seattle community. He supports a variety of nonprofits and speaks at schools about entrepreneurship. Ezell’s has supported the Major Taylor Project on several occasions by providing meals to youth riders, and Rudd has volunteered on MTP rides. Ezell's even has an STP link on the Community page of its website.

Wilson, co-founder of the Peace Peloton, says Rudd has been highly supportive of the Peace Peloton’s social justice bike rides and its mission of economic reform for Black people. “When we launched Peace Peloton, Lewis was one of the first to offer support and encouragement, and he has remained as a mentor to me and our organization,” says Wilson, who rides on Rudd’s STP team.

Rudd has created some custom cycling kits with Ezell’s branding for Wilson, Fields, and the team to wear on their two-day STP. He envisions “an Ezell’s train rolling down the road.”

Next year, when Cascade can hopefully resume its official in-person STP for the 41st time (the 2020 event was virtual, and 2021 will be as well), Rudd plans to ride it in one day. At an age when some people are slowing down, Rudd is cranking up the heat like a red hot fryer.

See you out there next summer, Lewis, and pass the gravy! 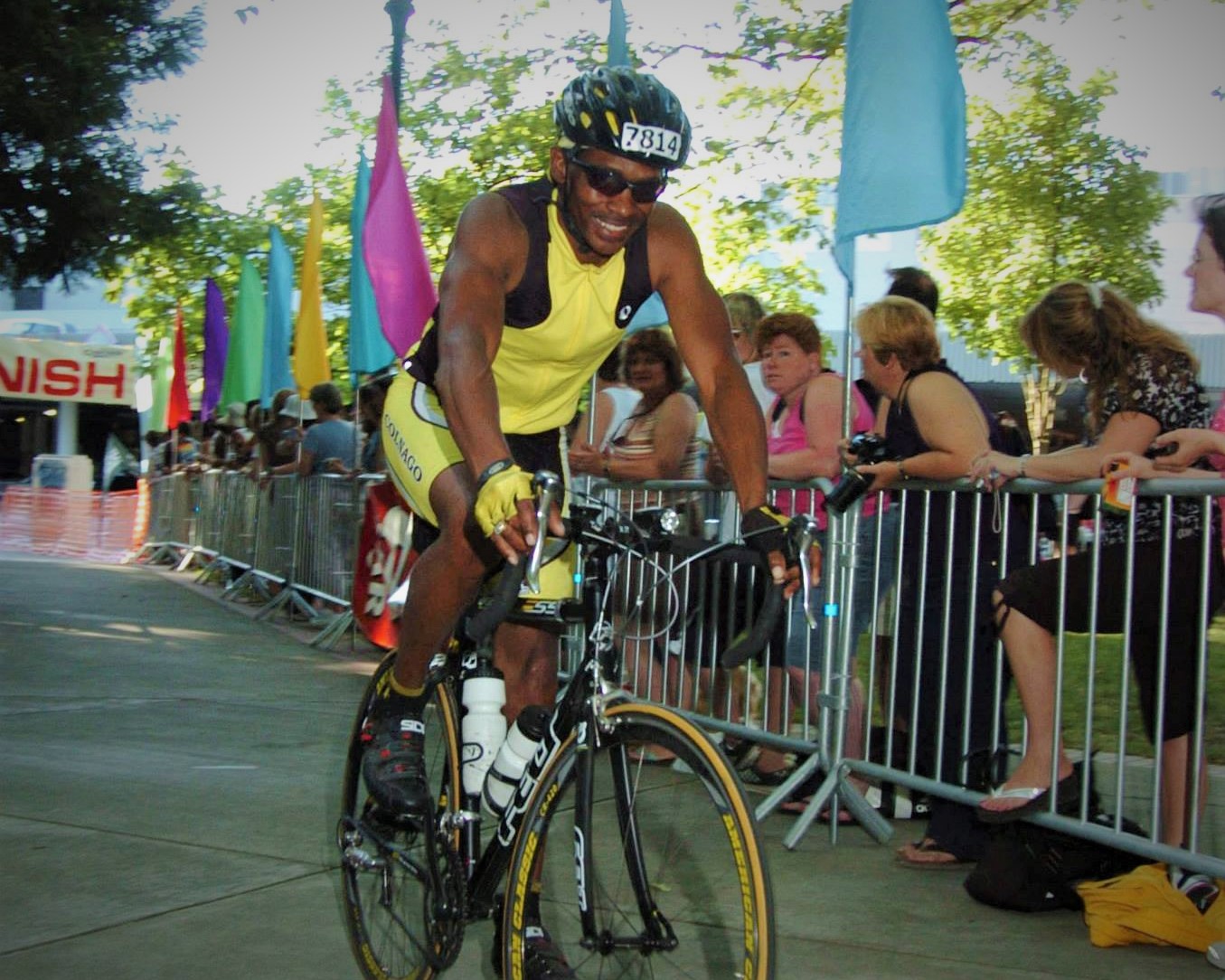 Register for the 2021 Kaiser Permanente Seattle to Portland Virtual Challenge presented by Alaska Airlines, a fundraiser for Cascade.

Solidarity with our AAPI community