Reginald “Doc” Wilson had modest hopes for the inaugural Peace Peloton bike ride on June 6, 2020. He expected the hastily organized event, which came in the midst of a pandemic and at the height of last summer’s Black Lives Matter protest movement, would attract about 30 people on bikes.

To Wilson’s surprise, about 300 people joined the ride that began in West Seattle and proceeded across the city. That first ride and the enthusiasm it generated marked the birth of a pedal-powered social movement that uses bicycles as tools for change in the struggle to bring “Economic Reform for Black People.” 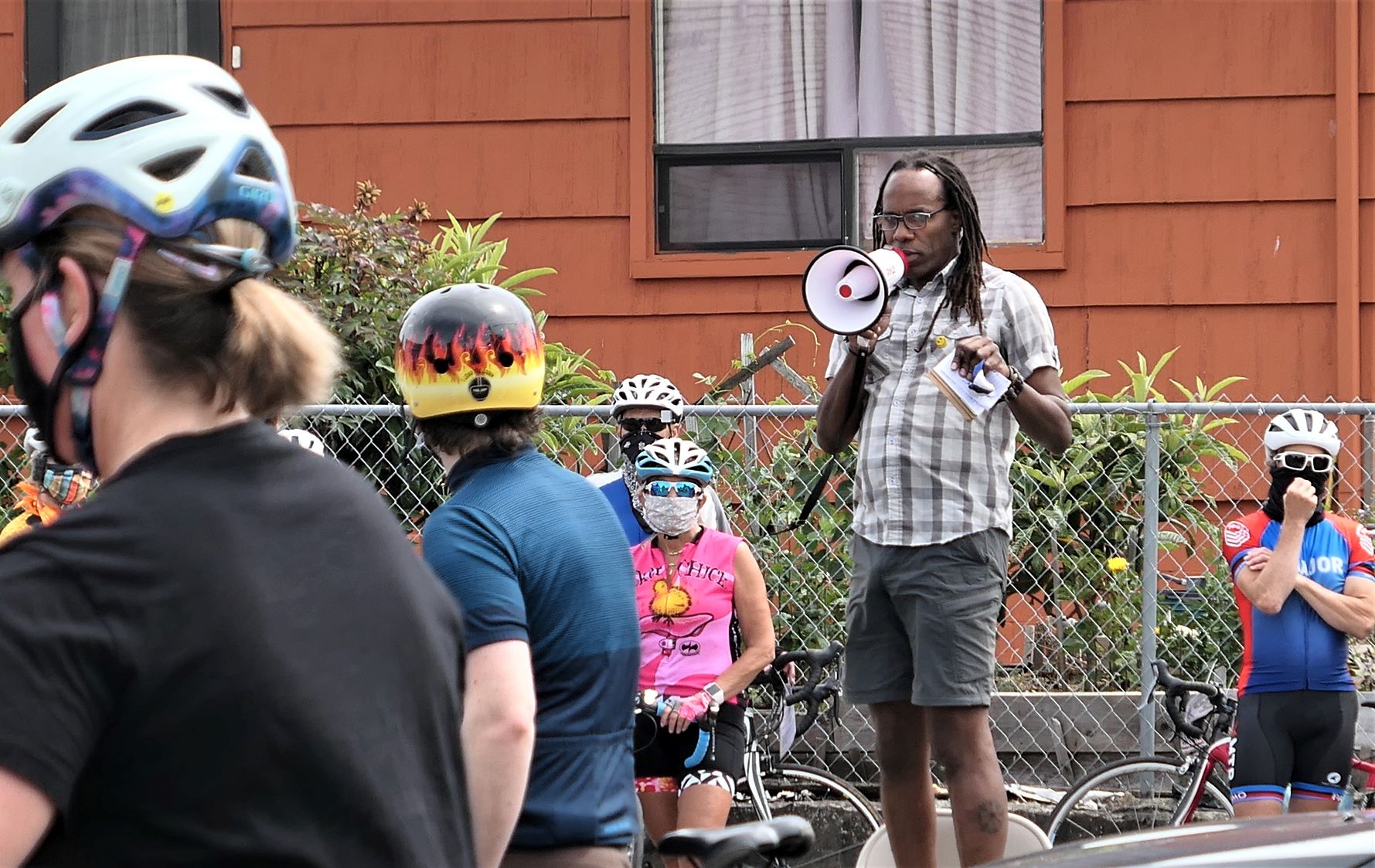 Wilson addresses the crowd before a ride last summer.

“After that first ride, it just took off,” Wilson says of Peace Peloton. “We didn’t know how big it was going to get. It has exceeded my expectations.” 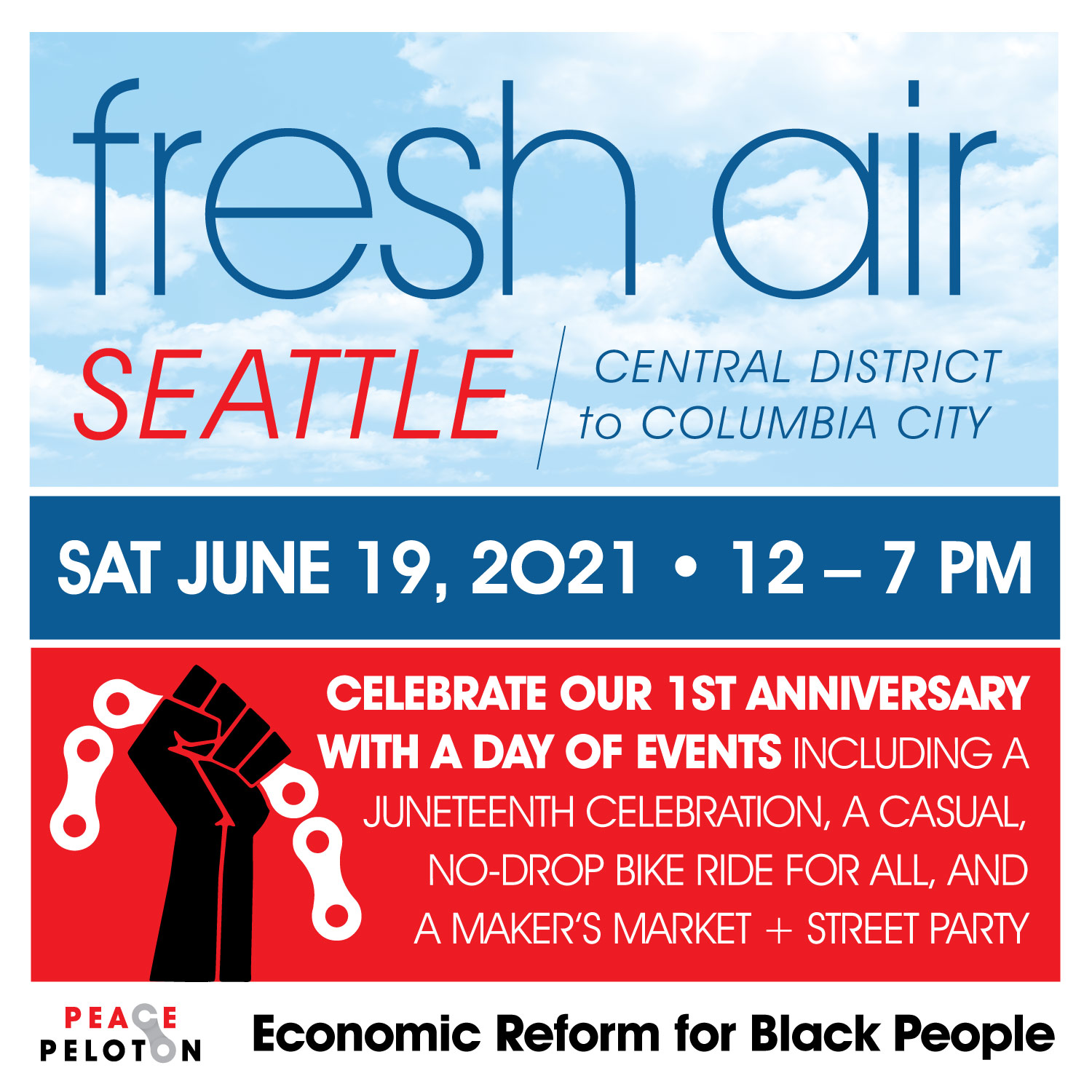 On Saturday, June 19, the Peace Peloton will celebrate its one-year anniversary with a group ride coinciding with Juneteenth, a holiday celebrating the end of slavery in the United States.

The anniversary ride will start at Seattle’s Northwest African American Heritage Museum, the end point for the first ride in 2020. From there, the ride will continue to various locations of historical Black significance in Seattle, including the former local headquarters of the Black Panther Party.

The ride will also call attention to sites where the racist banking practice of “redlining” prevented Black people from getting home loans. Prior to 1975-76, redlining was a regular practice in Seattle that restricted people who lived in the Central District and Rainier Valley from accessing affordable home loans, and denied lending to people of color to buy houses in whiter neighborhoods. Because homes are the primary method for families to pass on generational wealth, redlining’s legacy is “a major reason the typical White family has almost eight times the wealth of a typical Black family,” according to the Washington Post.

The June 19 ride will end in Seattle’s Columbia City neighborhood, where participants can buy goods and creations from BIPOC artisans and creators at the Peace Peloton’s twice-monthly Makers’ Market event. 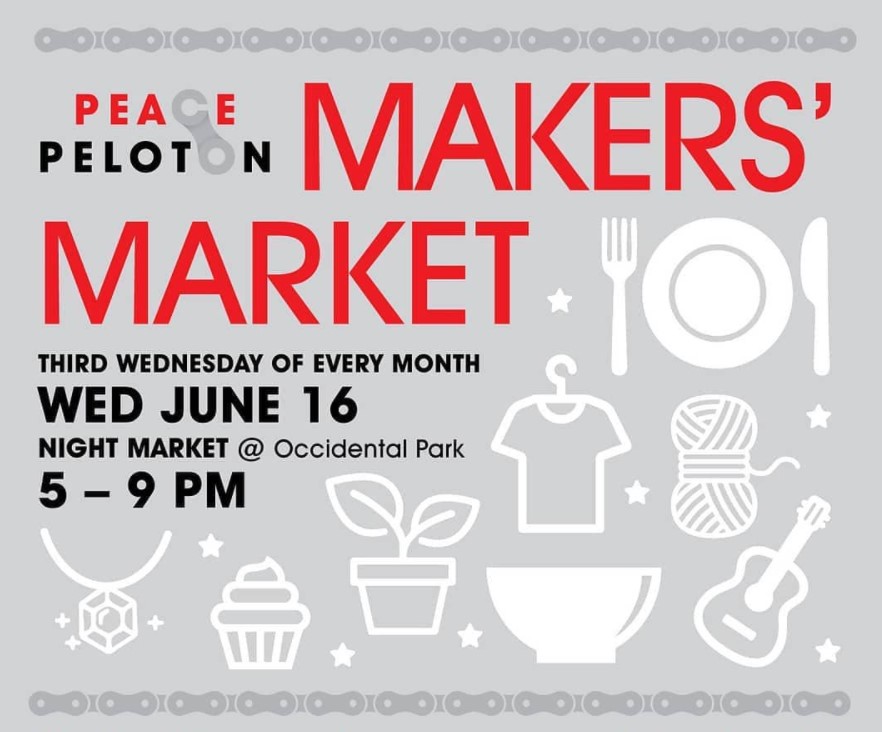 The next Makers' Market is on June 16.

Makers’ Market events are held on the third Wednesday and third Saturday of every month. They are among the many initiatives created by Wilson and his large cadre of volunteers. Begun as a grassroots movement, Peace Peloton has grown to become a nonprofit that has attracted about 4,000 people to 24 events in Seattle and other cities with a goal of using bikes to bring much-needed revenue to Black-owned businesses. Peace Peloton has directly helped generate revenue for about 30 businesses to date, Wilson says.

While the turnout at Peace Peloton events has been great, there is no doubt that COVID-19 and peoples’ concerns about social gatherings reduced participation. With vaccination rates rising, and travel and gathering restrictions loosening in the United States, Wilson hopes to turn out even more people on bikes to join the “Fresh Air” rides. 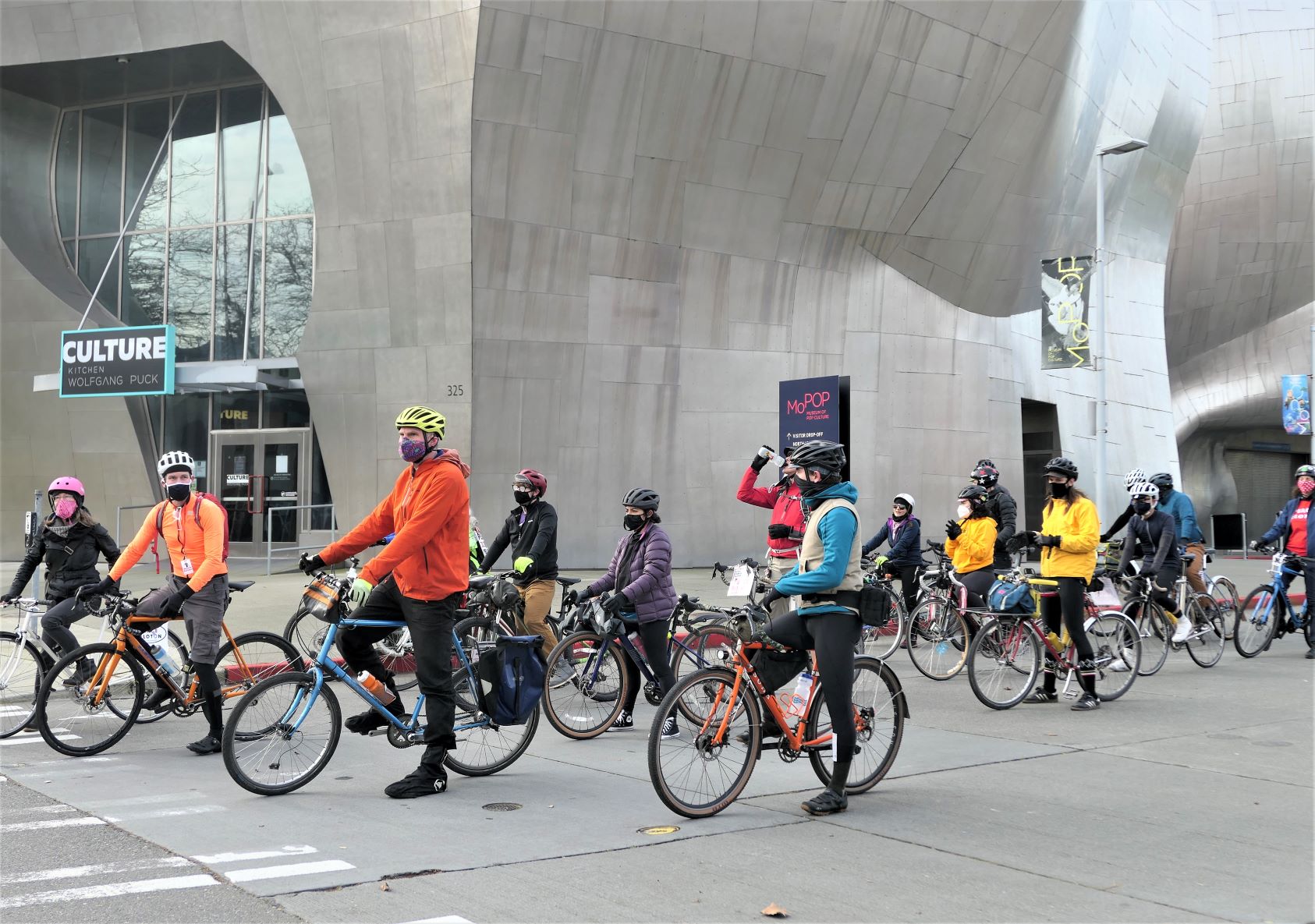 In addition to the Seattle rides, Peace Peloton has organized rides in Tacoma, Chicago, and Washington, D.C. These rides and the Makers' Market events are part of the organization's growing programming, which includes a business catalyst program to help Black entrepreneurs get their ideas off the ground.

Wilson is also working with a software developer to create an app that helps people locate Black-owned businesses, similar to the Intentionalist but a step further. “Not just restaurants and coffee shops but dentists and doctors and other professionals.”

“Our number one goal is to make this movement sustainable so we create economic reform for years to come,” Wilson says. “We want to get Black people into home ownership and help them launch businesses.”

“I’m pleased with the impact we have made with our business partners, but I know we can do more,” Wilson says. 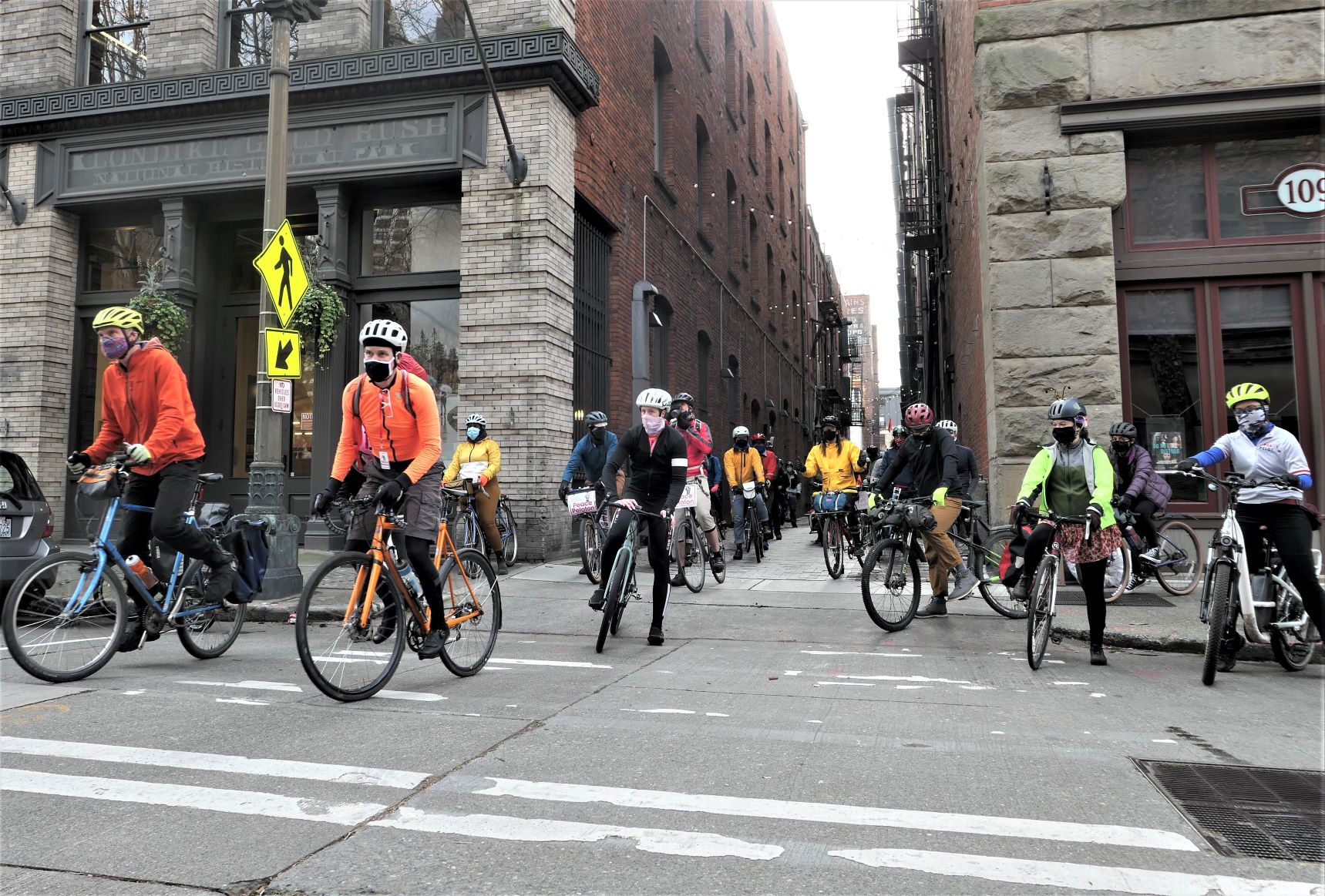 The start of a "Fresh Air" ride last winter.

Taking Bikes to Places that Need Us

In a Q&A with Cascade following that first Peace Peloton ride last year, Wilson described the movement as “sort of a bar crawl with purpose, except on bicycles.”

“I had been asking myself: ‘How do we take economic reform into our own hands?’ With bikes as our tools, I thought, ‘Let's identify Black-owned organizations and businesses that need us, that want to put their goods and services out into the world.’ It’s difficult in certain neighborhoods to attract a broad spectrum of people. So I figured, ‘Let’s ride there, bring some customers on bikes, create some buzz. Let’s take our bicycles to the places that need us.”

Peace Peloton's growing footprint and positive mission has caught the attention of national media. “What we’re doing is taking a critical mass of mission-aligned cyclists to businesses that are owned by Black and brown people,” Wilson told Bicycling.

When not working, Wilson has been training with friends to complete a DIY Seattle to Portland bike ride. He is incredibly busy but satisfied with the impact he and Peace Peloton are making. “I’m happy. The responses I’ve gotten from business owners and people who attend our events is great. We just need to continue getting the word out and growing our support from businesses and partner organizations so we can build a movement with staying power.”

Join us on June 19 to commemorate Juneteenth on bikes--and use our collective pedal power to push economic reform for Black people.

Read our July 2020 story about Peace Peloton’s expansion to Tacoma, and the donation of a team race bike from EF Pro Cycling to raise funds for the movement.

Check out the photo essay from the Inauguration Day ride we took with Peace Peloton to mark the historic swearing-in of the nation’s first female vice president of Black and South Asian heritage. 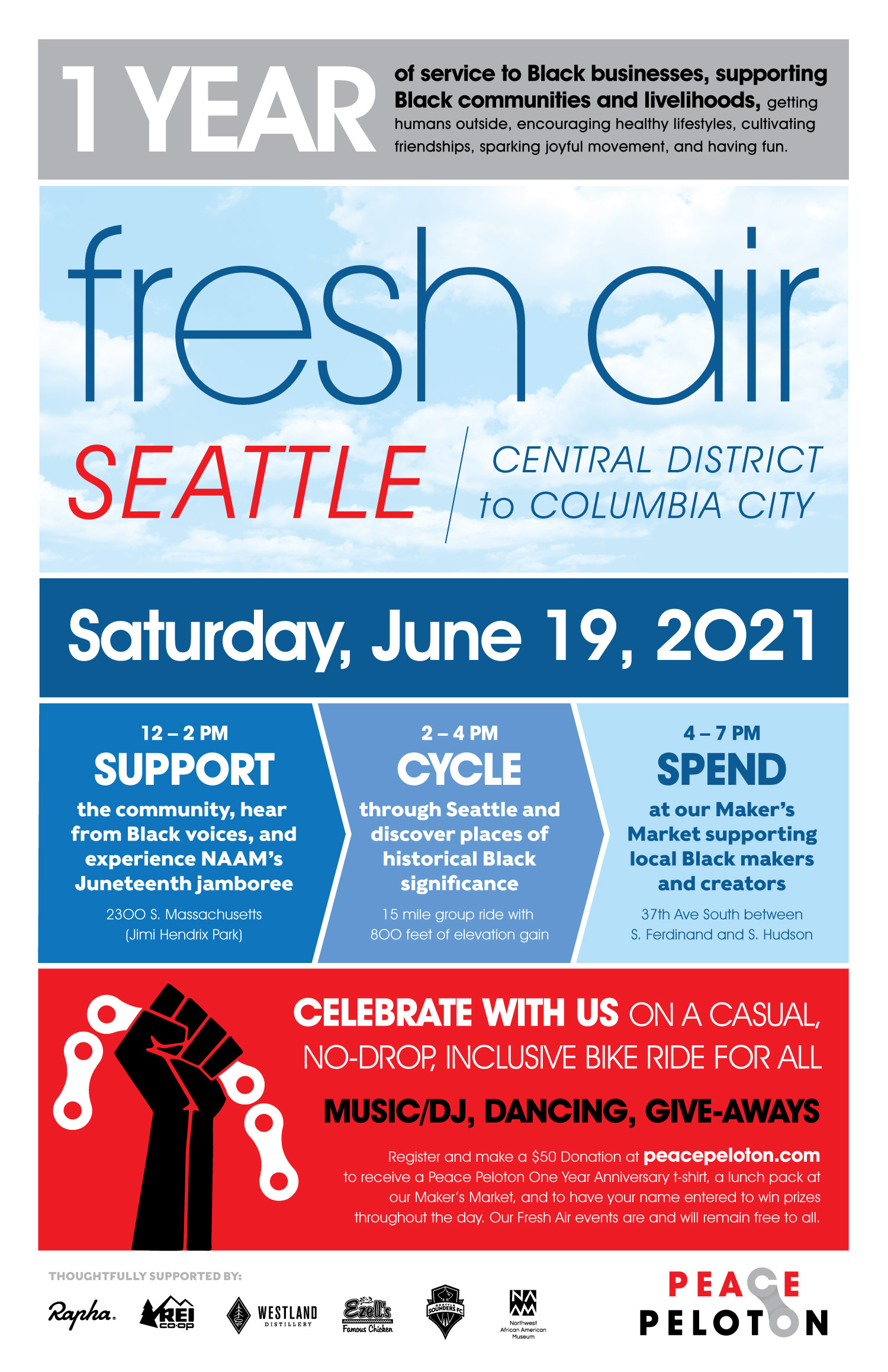