David Wiegand is a motivated long-distance bike rider who averages about 5,500 miles per year in the saddle. He has ridden STP, RSVP, Chilly Hilly and other big Cascade rides multiple times.

After getting his second COVID-19 vaccination this spring, Wiegand was struck by how lucky Americans are compared to individuals in many parts of the developing world, where vaccination rates remain low.

“I thought about how easy it was to register and get a shot, and how it was free and easy and local. Meanwhile, in many countries people are still suffering. The pandemic has shut down all vaccinations including for things like polio. Food supplies have been disrupted. Schools are shut down. We forget how good we have it.” 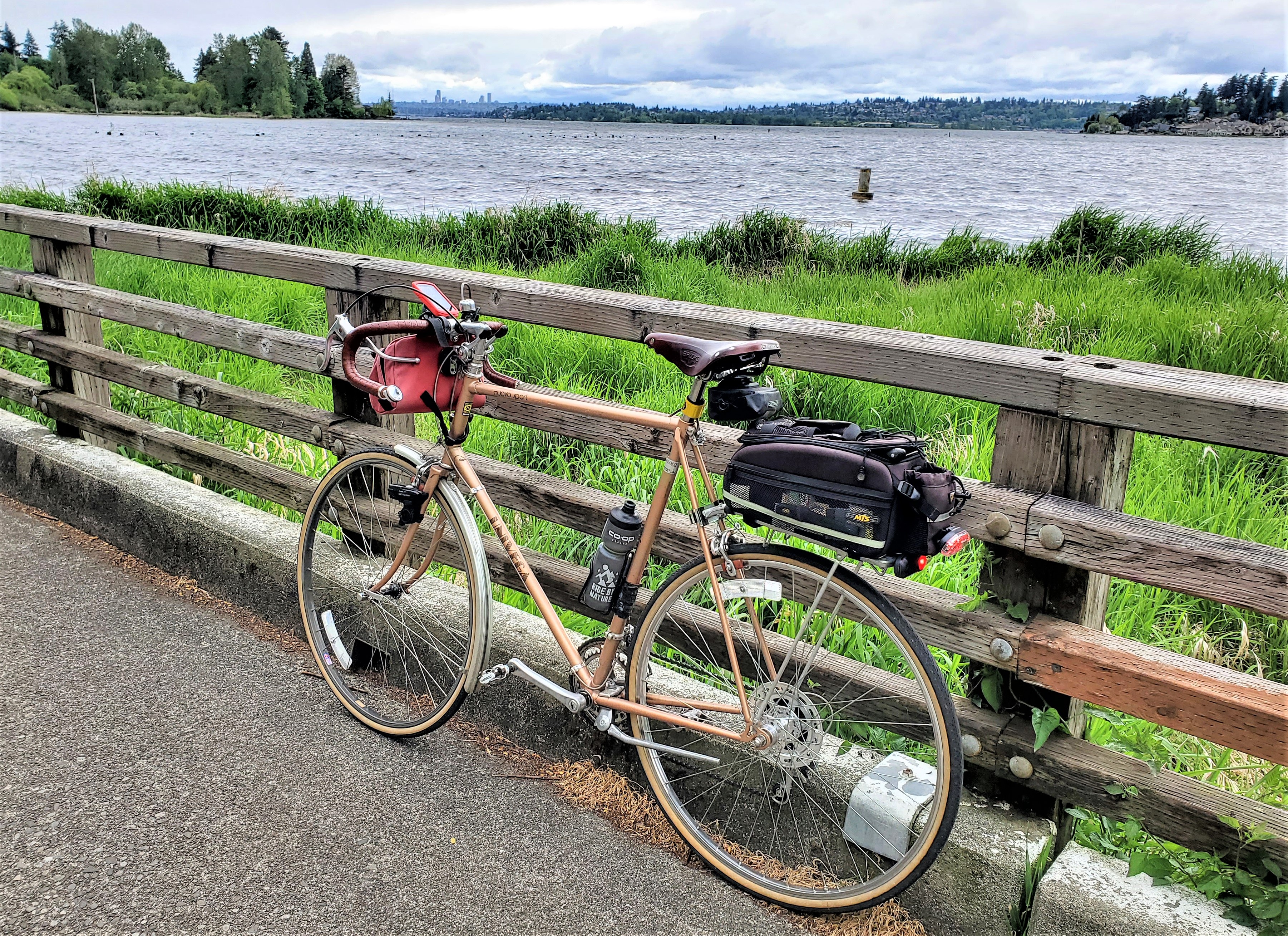 The 1980 Univega Wiegand rode in his STP, here pictured at Juanita Bay Park during a training ride.

A supporter of the nonprofit global children’s aid and humanitarian organization UNICEF, Wiegand decided to put his legs to work to help vaccinate others. On May 8 and 9, the 59-year-old Cascade member rode solo from Seattle to Portland, raising $3,526 for UNICEF’s efforts to deliver two billion vaccines in more than 180 countries in 2021.

Wiegand named the ride STP, or Stop The Pandemic--a play on Cascade’s Seattle to Portland ride that attracted up to 8,000 riders prior to the pandemic .

As Cascade prepares to hold its second Kaiser Permanente Seattle to Portland Virtual Challenge Presented by Alaska Airlines, from July 17 to Aug. 8, Wiegand’s ride is an example of how Cascade members can get creative with their solo rides during the pandemic (though we don’t recommend riding the route unsupported for most riders). It is also a reminder of the health disparities that bicyclists can help fight, especially in parts of the formerly colonized world where access to resources remains low.

“The past year has seen an increase in children who have been left hungry, isolated, abused and anxious,” UNICEF says on its website. “The education of hundreds of millions of children has been disrupted. Access to protection services and health services – including routine vaccinations – has been severely impacted. The pandemic is also affecting young people’s mental health and pushing their families into poverty.”

Moving Meditation and a Vintage Univega

For Wiegand, who sets bicycling goals for himself every year to stay motivated, getting creative also meant riding his version of STP on a vintage 1980 Univega steel-framed bike with just 12 gears. He added a vintage rear rack to carry water, food and supplies.

Only 12 gears on the retro Univega.

Wiegand planned to complete the 206 miles in one day, but stiff headwinds slowed his progress, putting him two hours behind schedule. He stopped for the night after crossing the Longview Bridge into Oregon, completing about 180 miles on day one. He rode into Portland the following morning, totalling about 211 miles.

While riding that many miles may sound miserable for people new to riding, for Wiegand it is a zen-like experience. “I call it ‘moving meditation.’ You get in the zone and can think about one topic for as long as you like. I can free my mind.”

He also uses technology to provide peace of mind. He rides with a Garmin Varia rear light with a radar system that detects oncoming cars. “It syncs with my Garmin GPS display and tells me when cars are approaching. It means that I can get lost in my thoughts without hugging the shoulder and stressing out about cars the whole way.”

Wiegand also rides with a mirror, and he has “a nicely broken-in Brooks saddle.” It also helps to have a higher purpose, such as a fundraising goal, to remain motivated.

STP is hardly the only big ride on Wiegand’s cycling resume. In 2017, he and his wife, Brigitte, also a Cascade member, rode their tandem from Seattle to Boston, and then from Boston to Quebec City--4,763 miles in 74 days. “From my hometown to her hometown,” he says. See their route here. 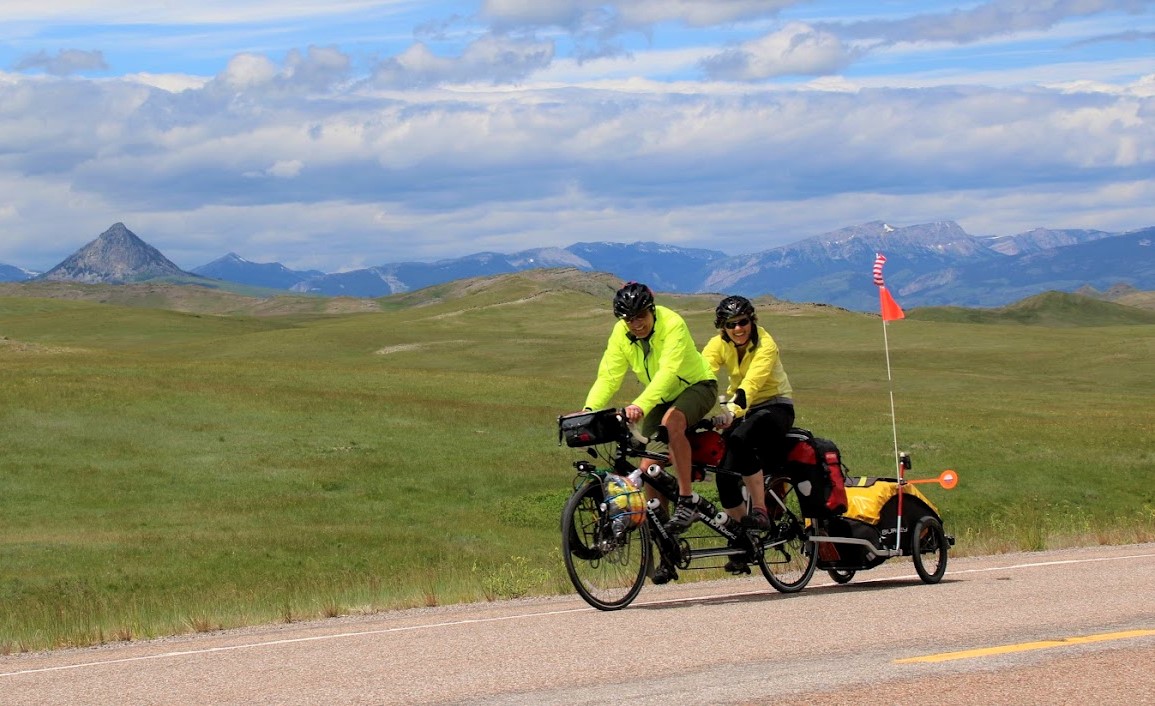 Seattle to Quebec with Brigitte. STQ!

Last summer, Wiegand pedaled from Seattle to the top of Hurricane Ridge in Olympic National Park and back in one day. Later this year he and Brigitte plan to ride GCOR, a circumnavigation of Washington’s Olympic Mountains on their tandem, riding mostly gravel roads and camping for 10 days.

All of this riding, says Wiegand, an IT project manager and founding board member of the Flying Bike Cooperative Brewery in Seattle's Greenwood neighborhood, has many benefits: “It keeps me fit, I sleep really well, and it allows me to indulge in my favorite craft beers.”

Cascade raises a frosty pint glass to Wiegand for his effort to help end the pandemic in other parts of the world.

Cascade Staffers Get Creative with their Virtual STP Ride Plans

STP: Why 200-mile solo routes are discouraged at this time