E-Bike Touring with a Cascade Member and Climate Activist

Lisa Richmond had two goals when setting out on a 640-mile electric bike tour down the Oregon coast and through the redwood forest of northern California: recharge her life, and inspire others to hit the road car-free.

“I needed to push the reset button,” says the 58-year-old Cascade member, climate activist, and electric bike booster. “It worked. I feel like a completely new person.”

Goal one: check. Goal two? You decide after reading her story.

Through the Redwoods and Down the Coast

On Sept. 20, Richmond set out from Astoria, Ore., a seaside city just over the Columbia River from Washington. She arrived in the scenic coastal hamlet of Mendocino, Calif., on Oct. 9. The trip took 20 days with three rest days. 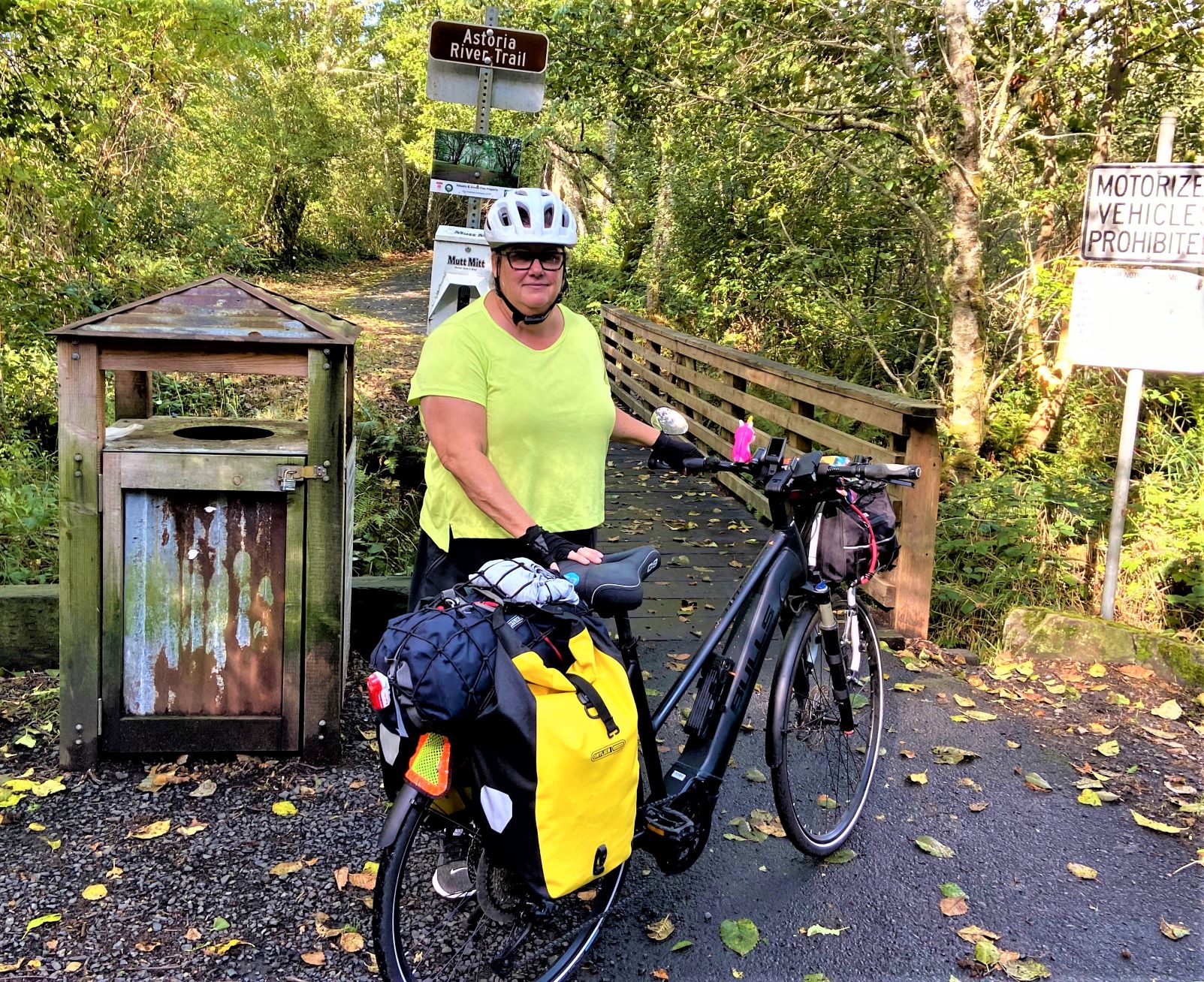 Day One, southbound on the Astoria River Trail.

Formerly the director of the American Institute of Architects’ Seattle chapter, Richmond left her job earlier this year with a plan to take a year off, find new career challenges, and get more active in efforts to address the climate crisis. “With this trip, I wanted to push the limits of what we imagine we can do with an e-bike.”

Scenic highlights include pedaling through California’s redwood forest and riding along the oceanfront down the coast of Oregon.  “The whole trip was beautiful,” Richmond says. “The biggest highlight is the sense of accomplishment I got from completing it.”

Richmond rode a Bulls “Cross Lite Evo” that she bought from Seattle Electric Bike. With a Bosch mid-drive motor and 625 watt-hour battery, the Cross Lite Evo is a premium electric bike that retails for $4,900. Expensive, but a fraction of the cost of a new electric car.

Richmond plans to continue her trip in the spring, starting in Mendocino and continuing down the coast to Southern California. She also plans to ride from Seattle to Astoria to complete that leg, which she didn’t want to ride during rainy fall weather.

One concern about traveling far from home on an electric bike is the fear of running out of juice with no place to recharge. Richmond avoided this by taking an extra battery. “In the end I barely used it,” she says. “The extra battery was more for confidence than a necessity.”

Richmond did a lot of preparatory research before departing. She tested her battery’s range and determined she could cover 100 miles on flat ground. During her trip, which traveled through mountainous terrain that required her to use more power, she averaged about 55 miles of range on one battery. 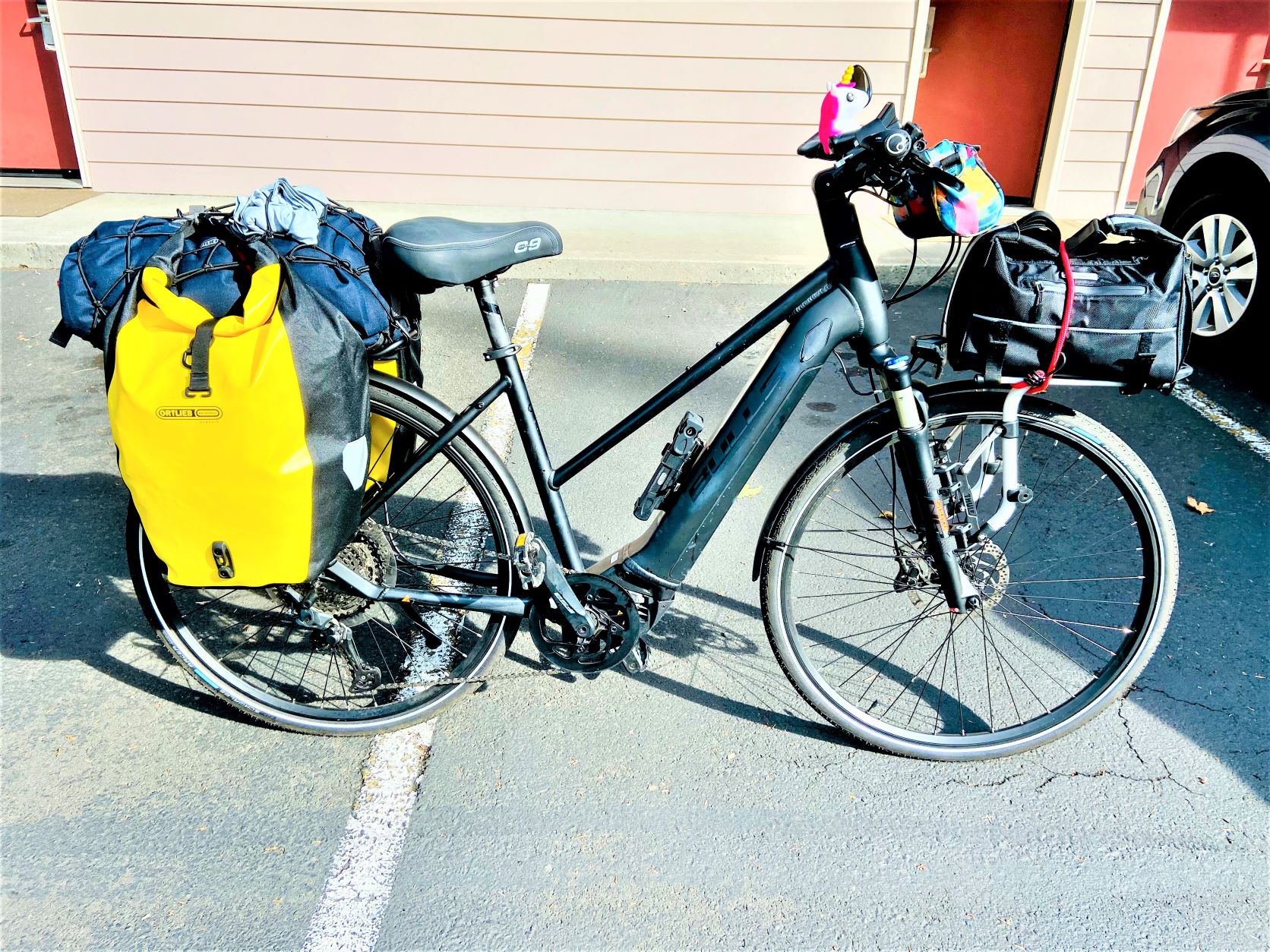 “I planned my route to average 45 miles a day, but my longest day was 63 miles. On heavy climbing days I planned my routes to cover fewer miles,” she said. On the hilliest day of her tour, she rode 31 miles, but she still had plenty of battery life left to go further--plus a spare.

To ensure she had access to an electrical outlet each night, Richmond stayed in motels, cabins, a yurt, and in a variety of vacation rentals. “Camping is doable but it is more challenging. You can camp in RV sites that have electrical outlets but then you’re sharing space with big noisy RVs, which is not as fun if you’re a tent camper.”

Not carrying a tent and camping gear also lightens the load. Plus, by staying indoors, she eliminated her worries about bike theft. “Knowing I could roll my bike inside was important,” she says.

Before embarking on her tour, Richmond did a test ride from Seattle to Vancouver, British Columbia. “I slimmed down my gear after that test ride.” She completed her 20-day tour with two rear Ortlieb panniers, a rear rack pack for storing the spare battery, plus a small front rack to carry a bag with daily essentials. She brought two sets of riding clothes plus one set of street clothes.

Richmond also carried the tools necessary to repair a flat, a pump, and a spare chain. Before departing she visited Gregg’s Cycles in Seattle to talk with a mechanic, and she watched videos from Park Tool about repairing flats on electric bikes.

Richmond is happy she practiced because “fixing a flat on the side of the road is a lot harder than doing it at home.” Heavy e-bikes can also be more difficult to work on than regular bikes. One day she developed a slow leak in her rear tire. Luckily it was just a few miles from her motel, where she removed the wheel and changed the tube.

Richmond also brought a spare pair of disc brake pads. Continuous braking on long downhills with a heavy e-bike can wear out brake pads. She replaced the pads mid-way through her tour and had them checked at a bike shop the next morning to ensure she had done it properly. 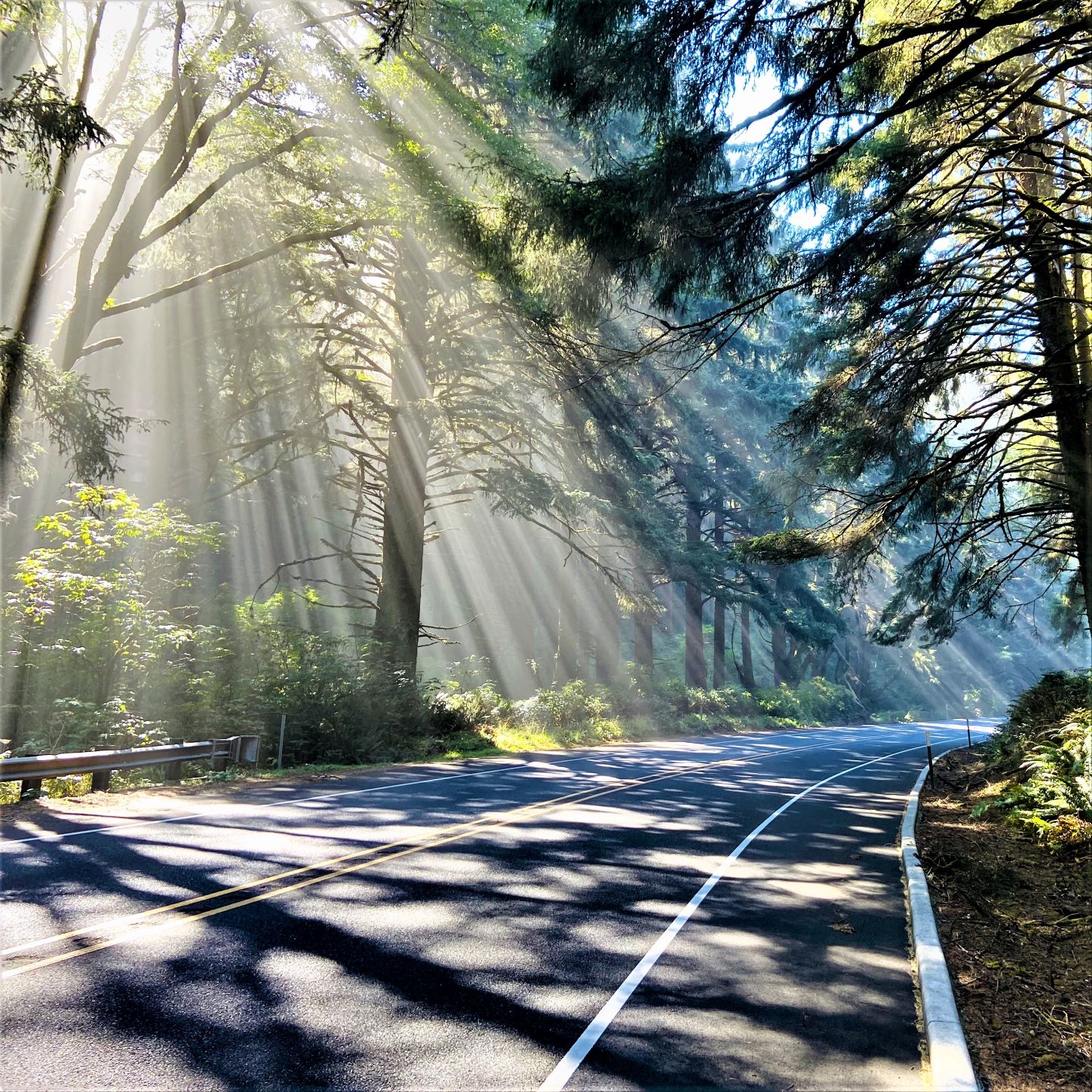 Sunlight in the redwoods.

The bike shop mechanic was impressed. “Throughout the trip people were very supportive and helpful. I was a little self-conscious initially because there are a lot of hardcore cyclists out there doing long tours.” Touring cyclists often see the same riders day after day, see-sawing past one another depending on their speed.

Richmond would frequently pass these hardcores on long hills. “They were like, ‘Wow, that’s a really great idea (touring on an e-bike). The fact I was doing it by myself gave me some street cred.”

Richmond was hardly new to bicycling before embarking on her tour. She was a daily bike commuter for 15 years. She enjoys bicycling for its health benefits and its ability to reduce car trips that are a leading source of air pollution and greenhouse gas emissions. Transportation is the largest source of carbon dioxide emissions in Washington state and the United States.

Richmond switched to an electric bike three years ago due to a hip injury, and she quickly became aware of e-bikes’ life-transforming abilities. “I think bikes in general are a very climate-friendly type of transportation. I commuted to work for years on my regular bike but I wasn’t riding it everywhere. Once I got the e-bike, the city opened up to me,” she says.

Richmond found herself using her e-bike on trips that previously required a car. “Hills and topography no longer mattered. I could go the safest way rather than the shortest or flattest way.”

With a background in architecture and climate activism, Richmond believes city planners must design communities to favor bikes over cars. In early November, she will travel to Glasgow, Scotland, to attend the next major United Nations Climate Change Conference, where she will talk up the benefits of electric bikes.

“I believe e-bikes,” Richmond says, “can be a major part of our efforts to solve climate change.” 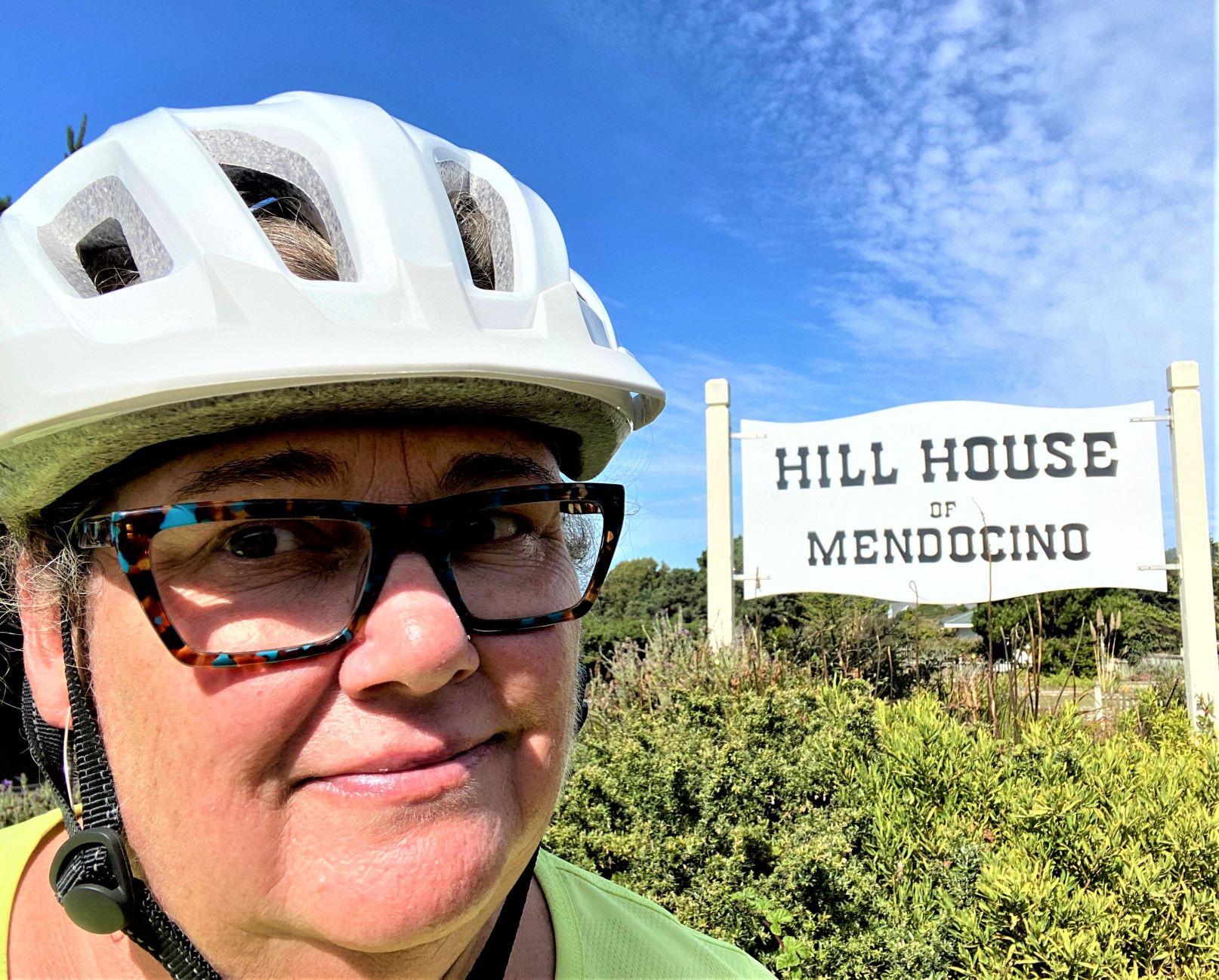