As a lifelong bike lover who has survived many close calls with cars and reckless drivers, this quote from the cult classic movie “Repo Man,” has always made me laugh. “The more you drive,” Miller tells Otto while philosophizing over a trash can fire, “the less intelligent you are.”

Thus my passion for bicycles--and one type in particular: the electric cargo bike. They are two-wheeled family minivans and pedal-powered delivery trucks. 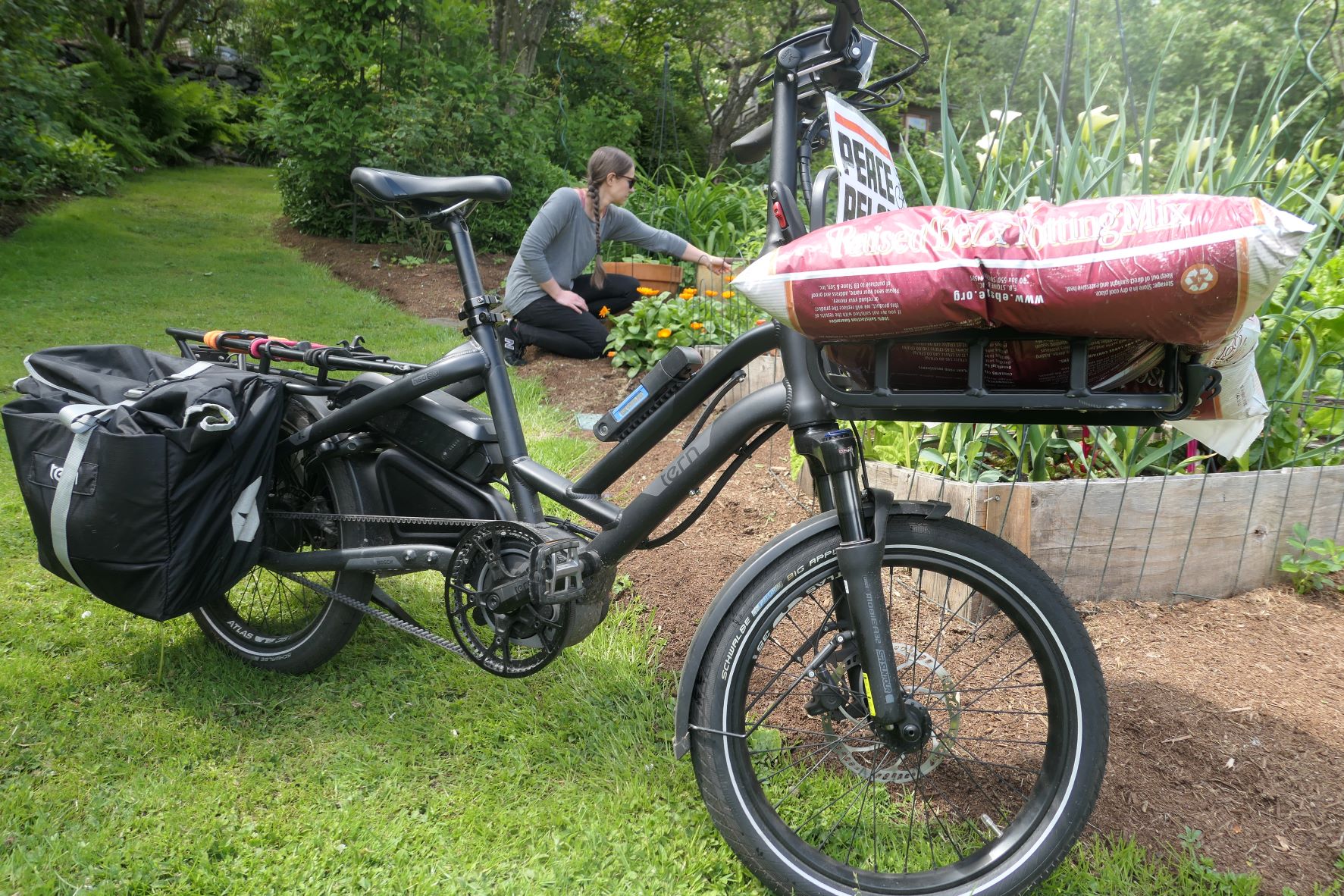 Hauling dirt and harvesting vegetables with the Tern.

My wife and I, who have no children, are firm believers. For the past year, we had a Tern HSD S8i on loan from a friend. It changed our lives for the better.

Katie and I are fans of e-bike camping. Instead of loading up our car and heading for the woods, we load up the Tern and a second e-bike and hit the road. Last summer, we pedaled 11 miles across Seattle to the West Seattle ferry terminal, where we boarded a ferry to Vashon Island and enjoyed a long weekend of riding, glamping, and outdoor adventure--no motor vehicle necessary. Read our blog post about that trip. 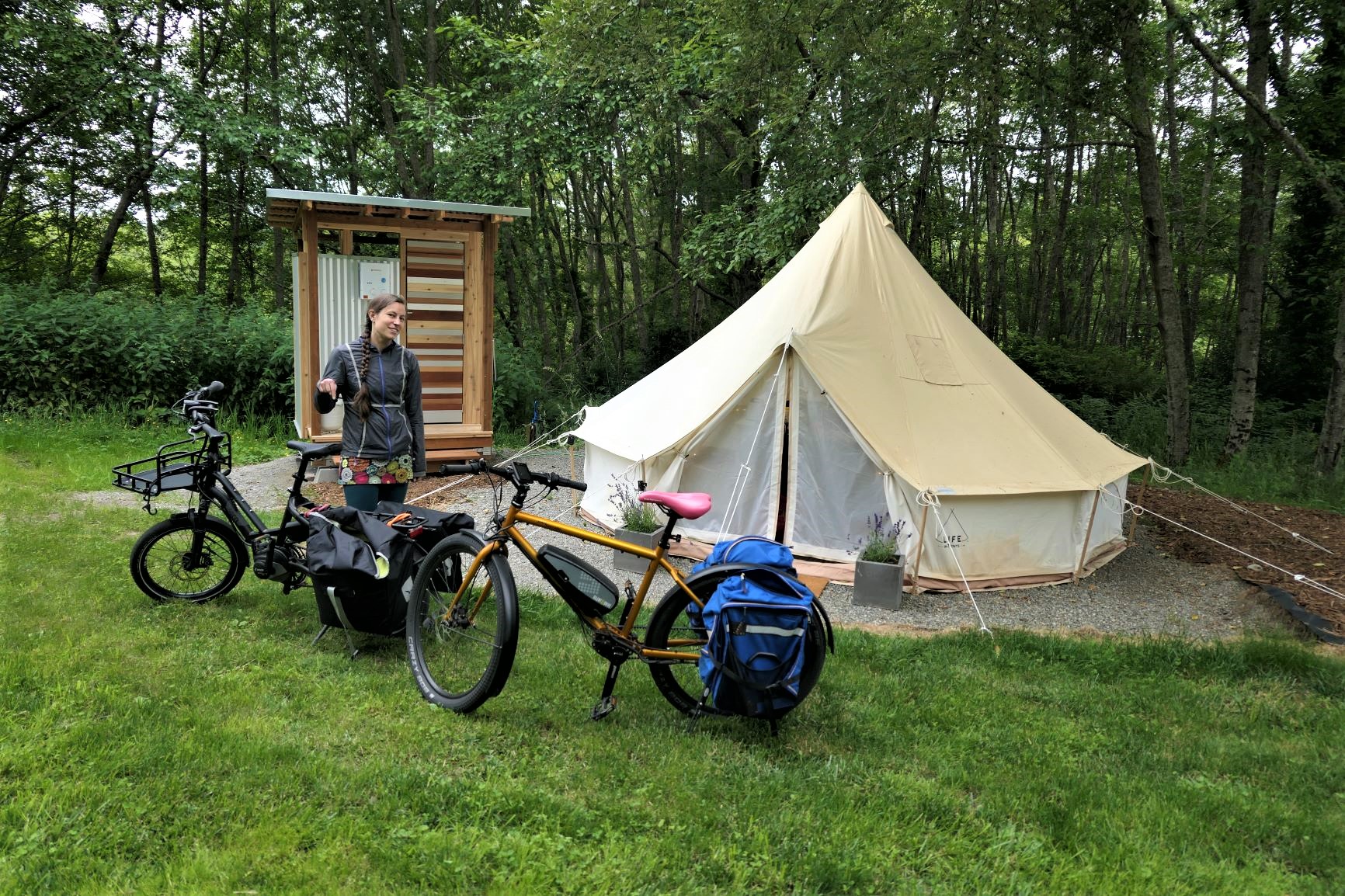 Katie points out the benefits of electric cargo bike glamping on Vashon Island.

The camping trip is just one example of how the Tern helped us drive less. We grocery shop, garden, haul large items, and even deliver Christmas presents by e-bike. 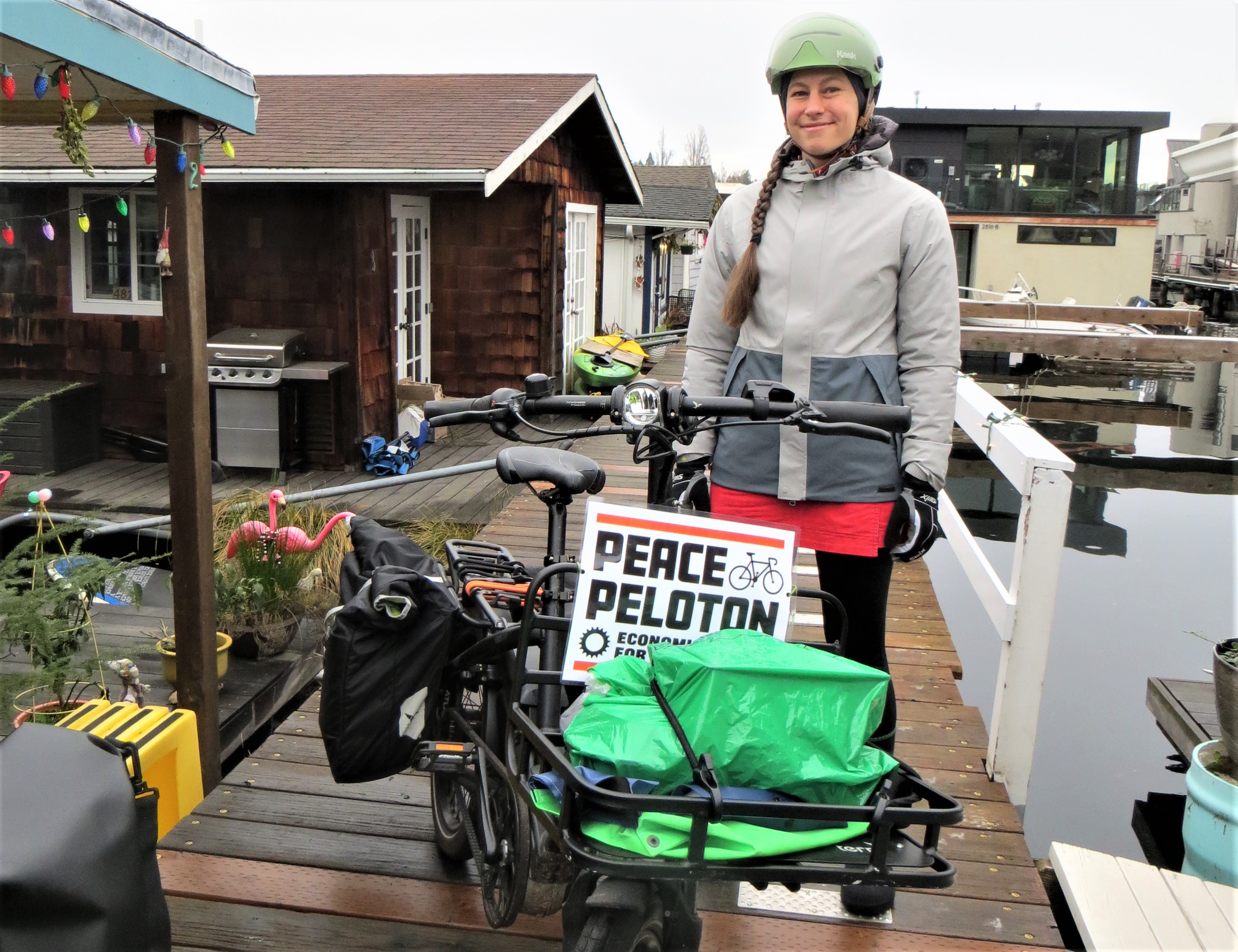 Ho ho ho. Loaded up and ready to deliver gifts on a drizzly Christmas morning.

All electric bikes have the ability to flatten hills, extend your range, and get you to work without sweating, but for families or individuals seeking to drive less, no category of e-bike enables the car-lite lifestyle more than electric cargo bikes. Chores and trips that would be tedious or mundane by car become fun and healthy outdoor excursions. And due to Seattle’s traffic and parking woes, these trips are sometimes faster by e-bike than by car.

Bicycling in Seattle often requires taking the lane and pedaling up steep hills while hauling loads. Charging uphill while carrying 100 pounds of cargo (the Tern is built to carry up to 375 pounds) or a week’s worth of groceries feels like a superpower.

We also spend less on gas and car maintenance. The average cost of car ownership, for vehicles driven 15,000 miles, was $9,561 in 2020. We are also mindful of the fact that transportation—primarily from motor vehicle use—is the largest source of carbon emissions in the United States, Washington state, and Seattle.

There are a wide variety of e-cargo bike styles, from Dutch “bakfiets” models with the cargo hauler positioned in front of the rider, to long-tail models that have an extended wheelbase and long rear rack with the ability to carry oversized panniers. Many models can be accessorized for carrying children or even adult passengers. They can also be outfitted for use by businesses.

In Europe, a growing number of delivery companies and postal services are employing electric cargo bikes. In Seattle, the University of Washington’s Urban Freight Lab has launched a logistics hub downtown, where goods can be loaded onto electric cargo trikes for “last-mile” delivery--reducing the need for trucks and delivery vans. 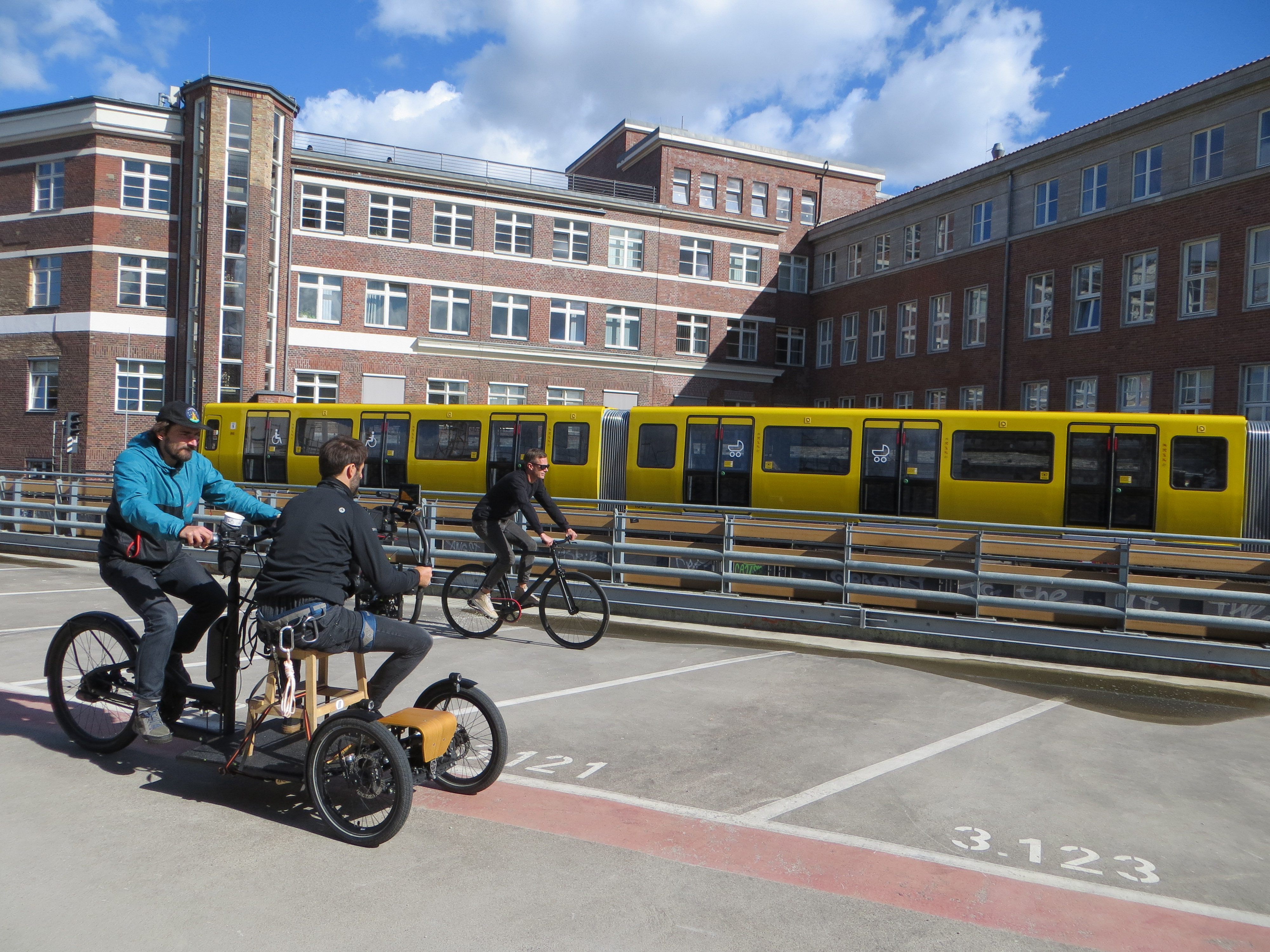 Several years ago I participated in a film shoot in Berlin that used an electric cargo trike as a platform for the cameraman.

The rapid growth of electric cargo bikes in Europe is due in part to government subsidies and incentives. Similar subsidies are lacking in the United States, although Washington Bikes pushed for passage of a bill that would have eliminated sales taxes on e-bike purchases. That bill failed. Unfortunate, as the federal government and state officer financial incentives for electric cars.

“What these machines really do is open people up to ways of creatively solving problems without the use of traditional motor vehicles,” says Education Director Stephen Rowley, who owns a Bullitt. 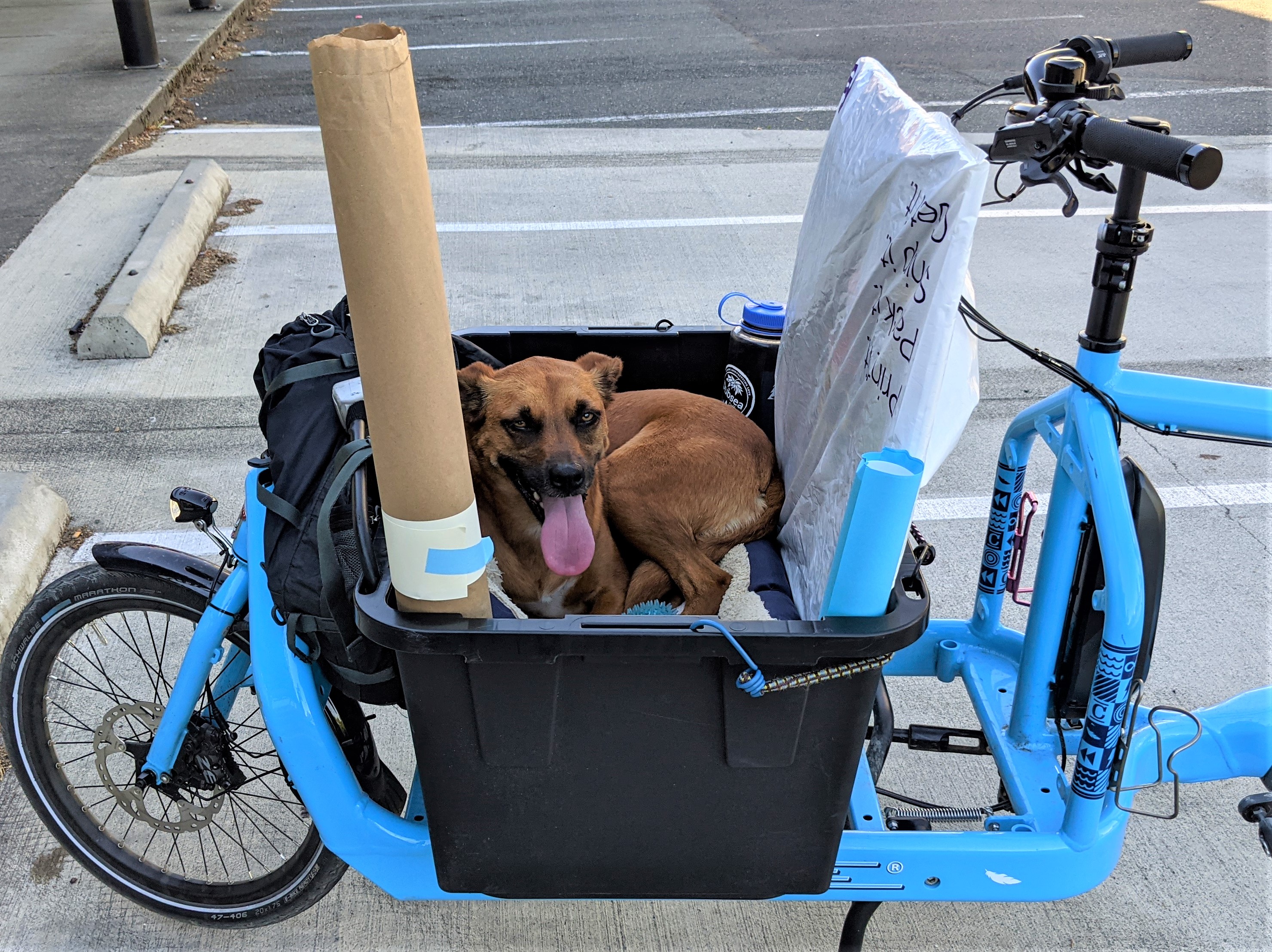 Patti settles in for an electric cargo bike cruise on Rowley's front-loader Bullitt.

“The logistical problems of future generations will need to be solved without the easy solution of fossil fuels,” Rowley says. “Riding a cargo e-bike is forward-looking, and I feel that way every time I load my dog Patti into her cargo box and head out for the day.”

Even though it’s a cargo bike, we used the Tern for bike trips even when we didn’t need to carry cargo. I rode to business engagements on the Tern when pressed for time. People drive full-sized SUVs to work, so there’s nothing wrong with riding a larger than necessary e-bike. 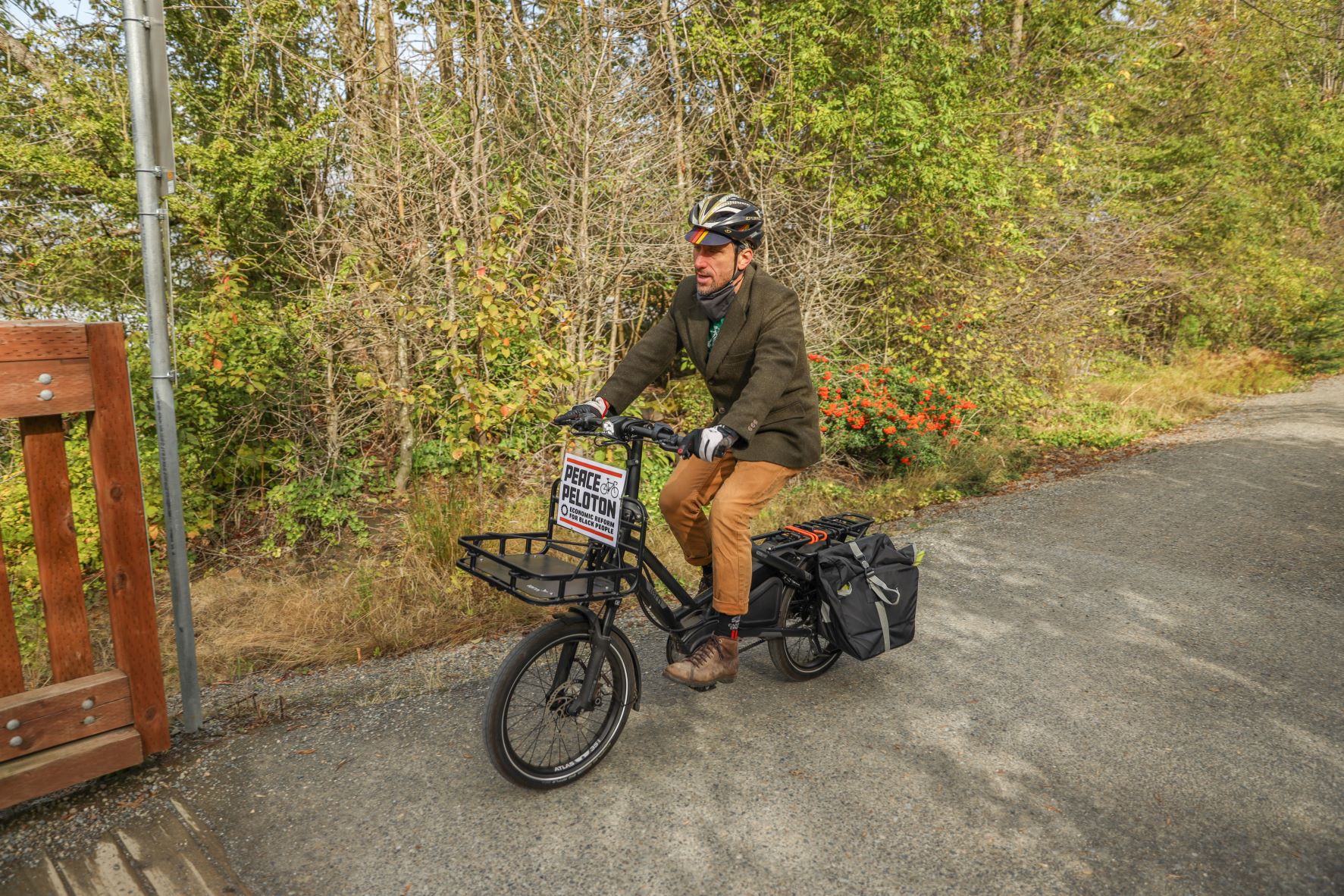 The Tern has been ridden in multiple Peace Peloton events and for Cascade-related rides.

Katie occasionally used the Tern when I rode my lightweight road bike. She carried the water, food, tools, and a full-sized floor pump in case I flatted. I got to ride light and fast with no tools stuffed into my pockets.

The Tern was also helpful during my volunteer food bank delivery rides with Cascade’s Pedaling Relief Project, which uses bicycles, cargo bikes, and bike trailers to transport and rescue food for food banks, as well as delivering books and supplies for schools. 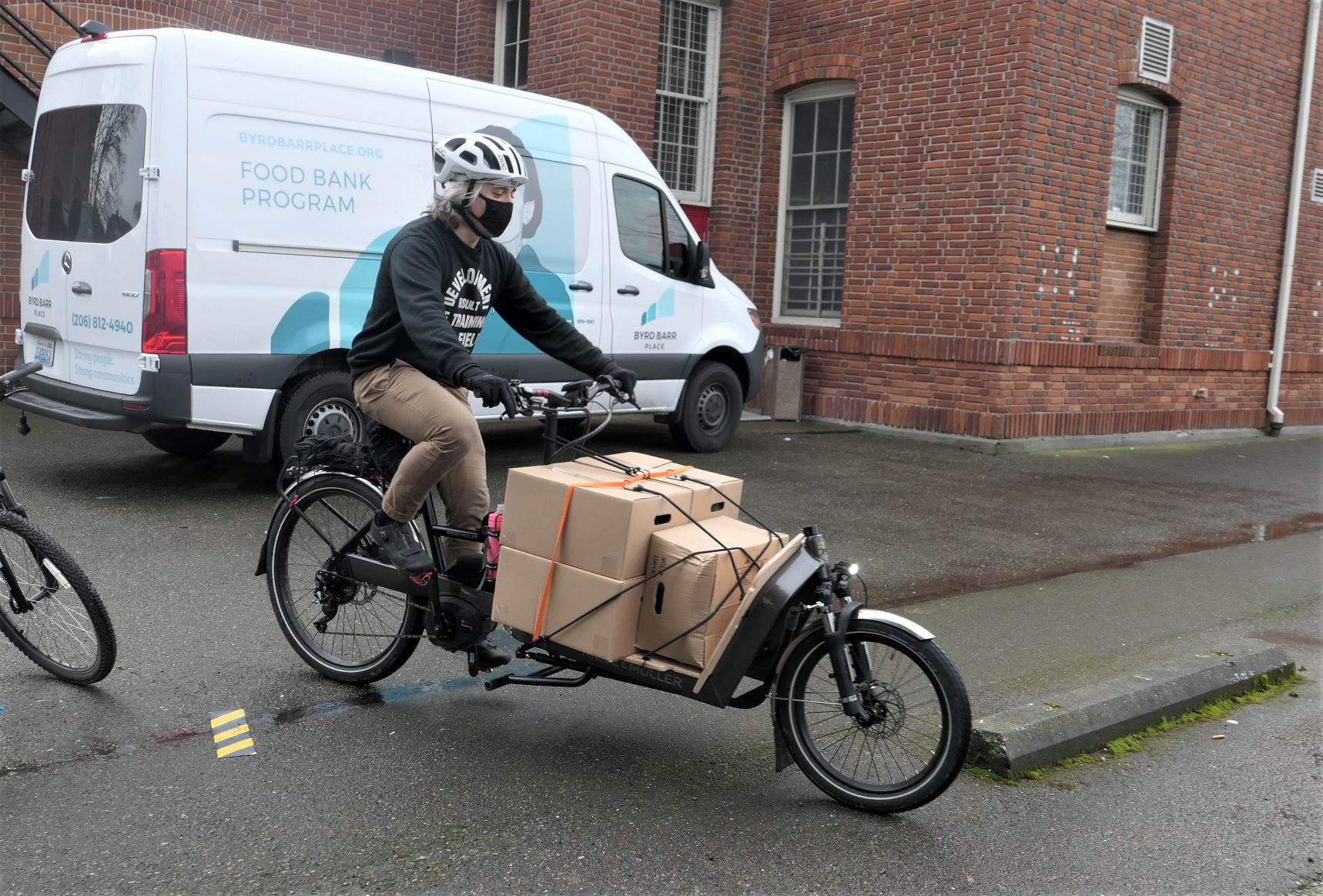 Michelle Plesko of Kirkland owns an Urban Arrow front-loading electric cargo bike. With five children, she and her spouse also own an Xtracycle cargo bike. They recently bought their 13-year-old daughter a Tern HSD. “We use them for everything. We only drive if we are going somewhere too far or not safe to take the bikes,” she says. 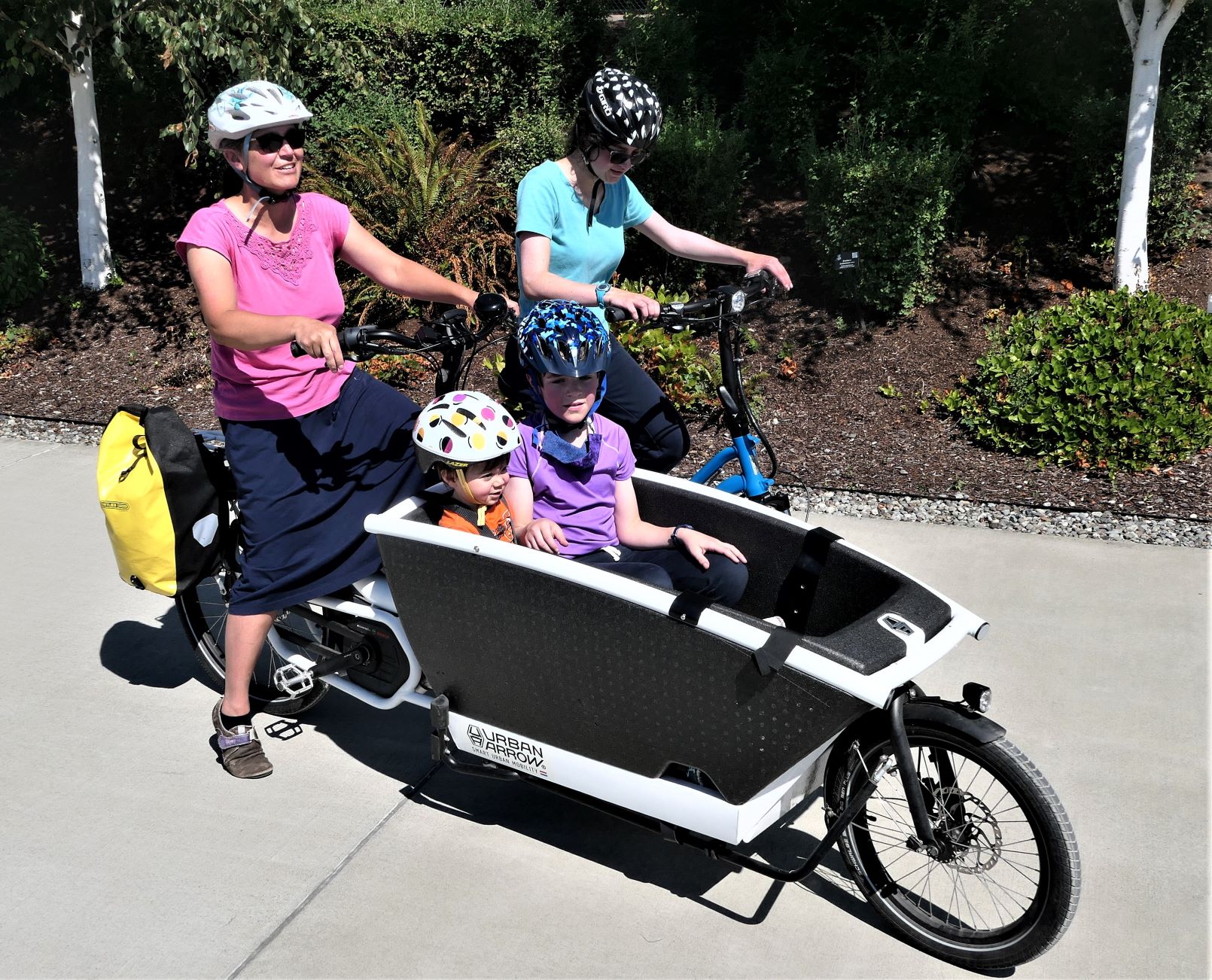 The Pleskos live in a bike-friendly area of Kirkland and ride to the grocery store, church, library, friends’ homes. “These are our first mode of transportation. It’s wonderful.”

I have too many bicycles, but if I could only have one it would be a compact electric cargo bike. You can ride it fully loaded or carrying nothing but yourself, at a cost of pennies per mile.

The big caveat is that electric cargo bikes can be expensive. The RadWagon 4 is one of the more affordable models at $1,900. Prices go up from there. The Tern HSD S8i sells for $4,100. The Riese & Muller Packster 40 costs $6,500. These can be costly machines, but they’re worth the investment for individuals with the money and space to store them--and compared to the skyrocketing prices of used motor vehicles, cost way less overall.

The good news is you don’t need to buy a cargo model. Any e-bike will do if you attach a trailer. The Pedaling Relief Project uses Burley bicycle trailers that can be attached to nearly any bicycle or e-bike for carrying kids or heavy objects. 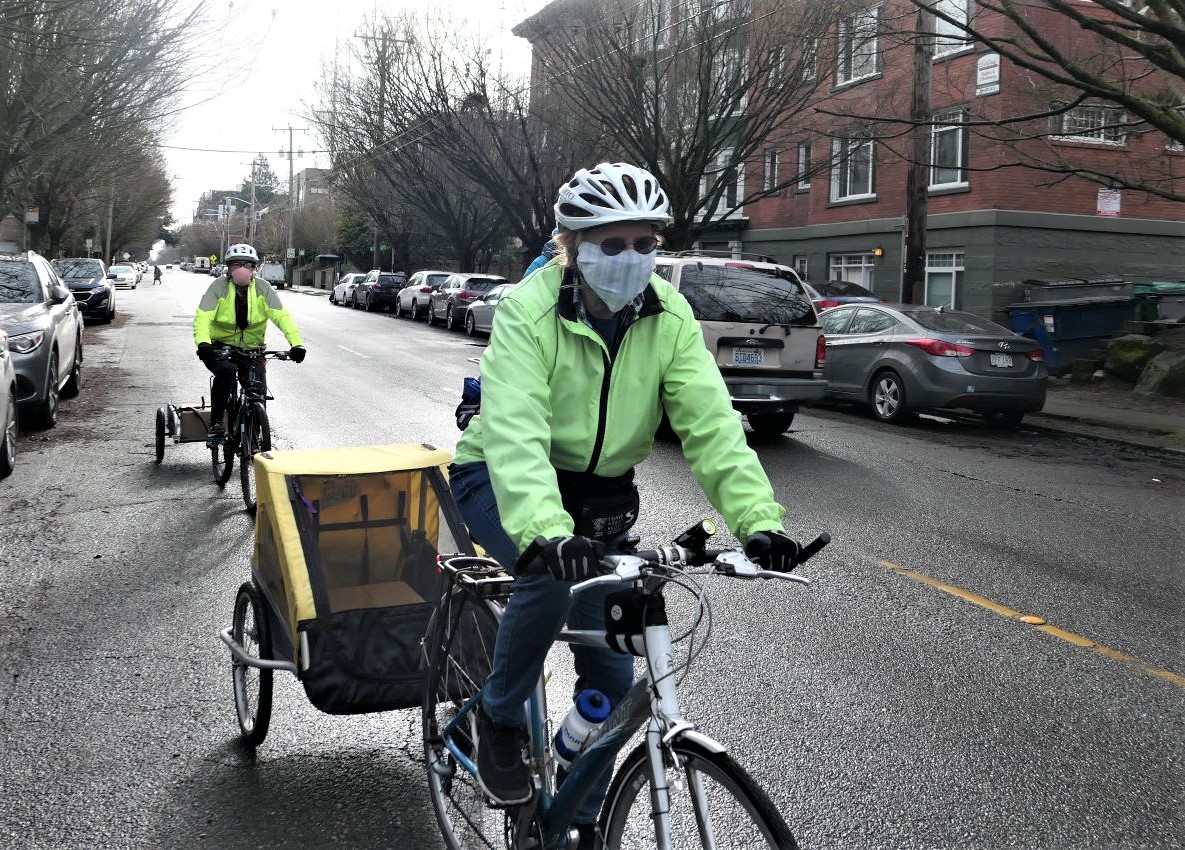 Bike trailers are an affordable way to turn any bicycle into a cargo hauler.

Looking to buy one? For Seattle-area residents, G&O Family Cyclery is a cargo bike specialist with a variety of high-end European brands located in the Greenwood neighborhood. Rad Power Bikes, a Cascade sponsor, offers test rides at its showroom in Seattle’s Ballard neighborhood, and will also schedule mobile test rides.