One Year and 1,000 miles: How an Electric Bike Transformed a Cascade Member’s Life | Cascade Bicycle Club
Skip to main content 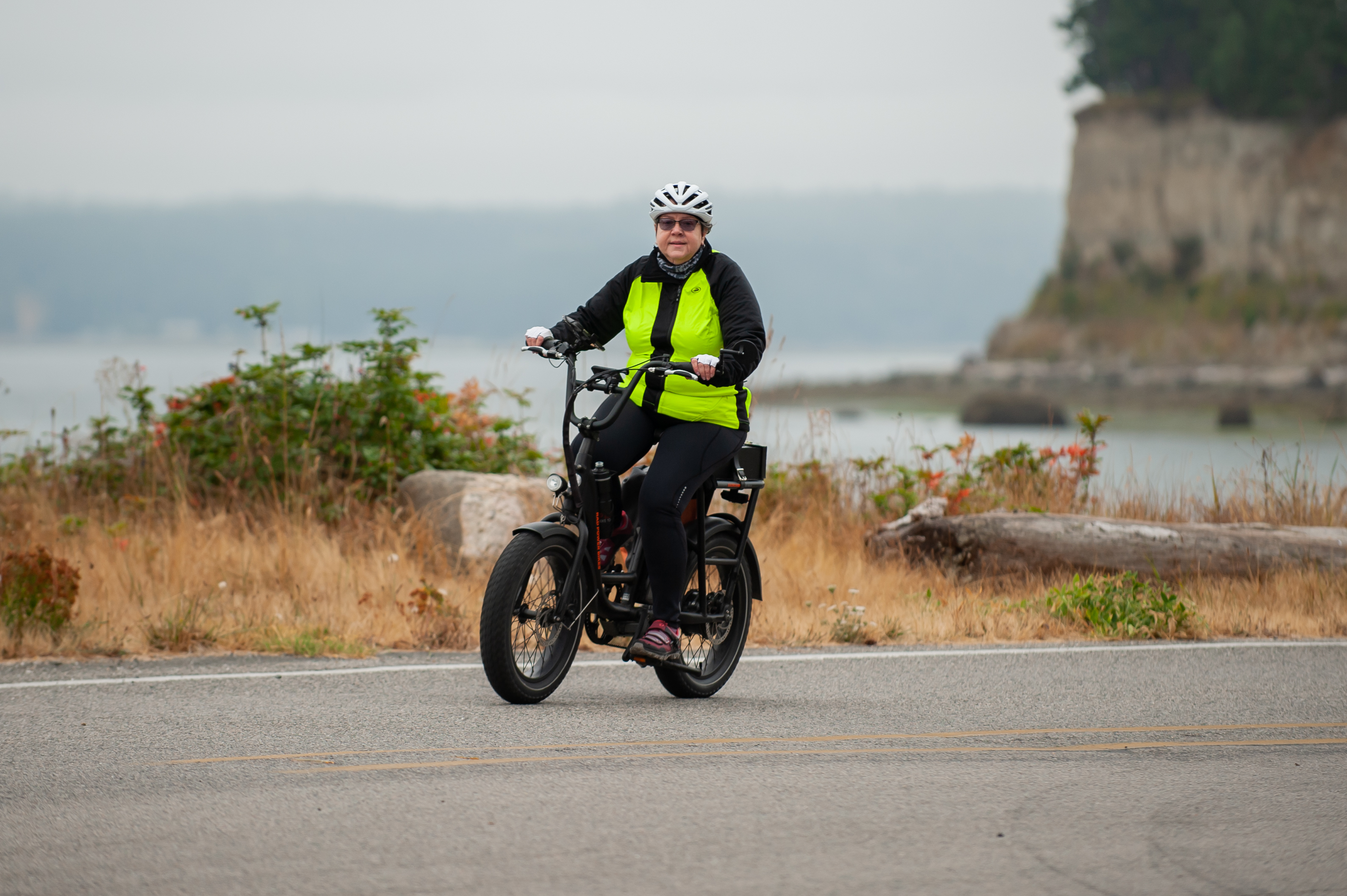 Anita Elder exemplifies how an electric bike can transform someone's life. One year after buying her first e-bike, the 62-year-old Seattle resident is happier and healthier than she has been in years. This month, she passed a milestone: 1,000 miles ridden during the past year.

“My mental health is great. When I’m riding I feel like a kid again,” says Elder. “I am having so much fun that, when I’m not riding I’m thinking about riding.”

Elder is part of the electric bike boom that is taking place from Seattle to cities across the country--and world--during the pandemic. Some people are buying e-bikes to commute to work or reduce their car trips, while others--including many senior citizens--are buying them to get exercise and travel farther than they could on a regular pedal bike.

Due to their social, health, and environmental benefits, Cascade’s affiliate, Washington Bikes, is supporting a bill in Olympia to make e-bikes more affordable in Washington. Some studies show that people who own e-bikes get more exercise than people with regular bicycles because they ride more often.

Elder bought her e-bike in March of 2020, when she was recovering from COVID-19 and feeling trapped at home. A freelance graphic designer who lives near Green Lake, she considered buying a regular bike, but she knew from past experiences pedaling in hilly Seattle that she would ride it a few times and then give up.

Using her government stimulus check, she bought a pedal assist RadRunner from Rad Power Bikes, a financial supporter of Cascade, for $1,200. With accessories and a helmet, the total purchase came to about $1,600, which she paid off in monthly installments on Rad Power’s financing plan.

She likes the bike’s stable, step-through frame and upright seating position, and the fat tires that provide traction and shock absorption on bumpy streets and gravel trails. “It was nerve wracking at first because I hadn’t ridden a bike much in the last 30 years,” says Elder, who has had two knee replacements and describes herself as overweight. “But the more I rode, the more my confidence grew.”

To explore further afield, Elder bought a hitch-mounted e-bike rack for her car so she could take roadtrips. She had difficulty loading the 62-pound e-bike onto the rack at first, but now, due to her improved strength, “I can lift it up with no problems.” 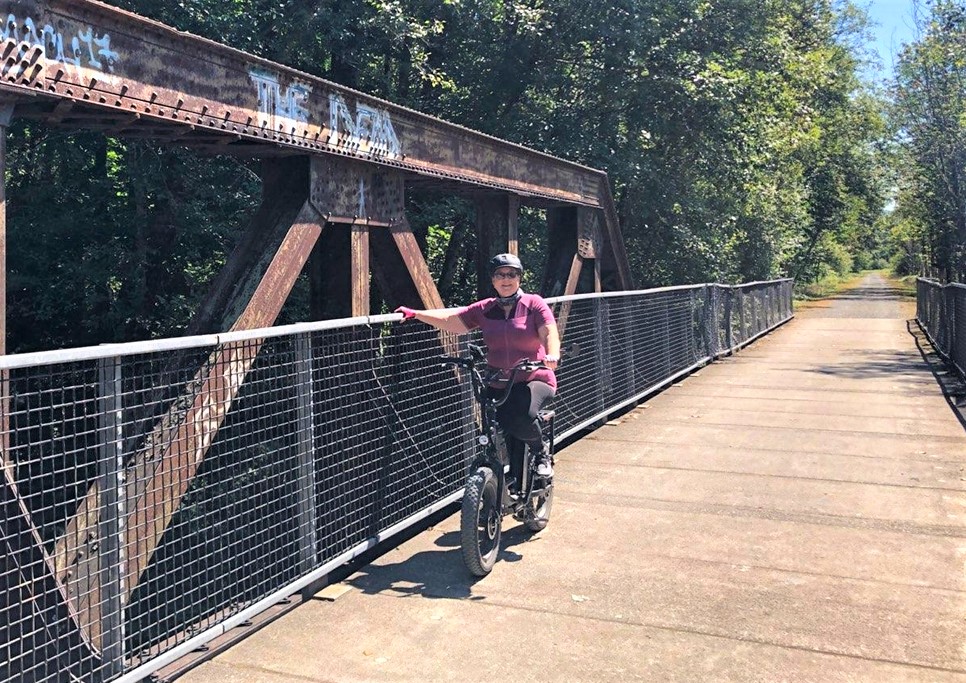 Elder has been exploring Washington's rail trails and bike paths.

Elder gets about 35 miles of range on one battery charge. She bought a spare battery to bring on long rides, enabling her to double the distance she can cover. The rack and extra battery have enabled her to explore the Olympic Discovery Trail by Port Angeles, as well as the Foothills Rail Trail in Pierce County, Washington. Elder’s longest ride as of mid-March was 49 miles--though she plans to top 50 soon.

To find riding friends, Elder joined Cascade last April. She had participated in seven Free Group Rides when we spoke. “I learned a lot while riding in the Free Group Rides, how to do hand signals for stopping and turning, and saying things like ‘car back.’ They helped me gain confidence and learn some of the rules of the road.”

Elder says everyone on the Cascade Free Group Rides was welcoming and friendly, even though she was the only person on an electric bike. Cascade invites anyone with an e-bike to participate in its Free Group Rides and all of its events and rides.

In late April, she has signed up to participate in Cascade’s first group tour of the year: the three-day Lake Chelan Tour Lite. She has purchased two panniers and already made her reservation at the Lake Chelan State Park campground, where she can camp for free as a military veteran. 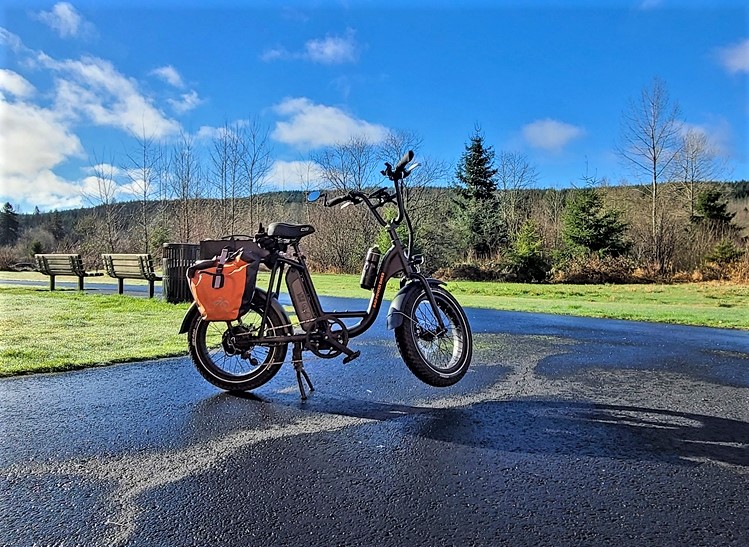 Elder's bike kitted out with panniers for overnight touring.

One of the few drawbacks of e-bikes--in addition to their weight--is that maintenance costs tend to be higher than on a standard bike. Elder has learned some basic bike maintenance, but when she has a mechanical issue that needs expert attention, she calls Rad Power’s mobile van repair service. She’s had three tuneups over the past year. Elder also bought bike insurance to protect her from theft, and she has three locks that she uses when locking up outside for any length of time.

Once the pandemic is over and she can fly again, Elder wants to book a group e-bike tour of the Lakes District in Austria and Switzerland. Many bike tour groups offer electric bikes these days. She encourages older people and anyone who is unable to ride a regular bike to look into purchasing an e-bike.

“Now that I’ve been riding for a year I’m like: Why did I wait so long?”