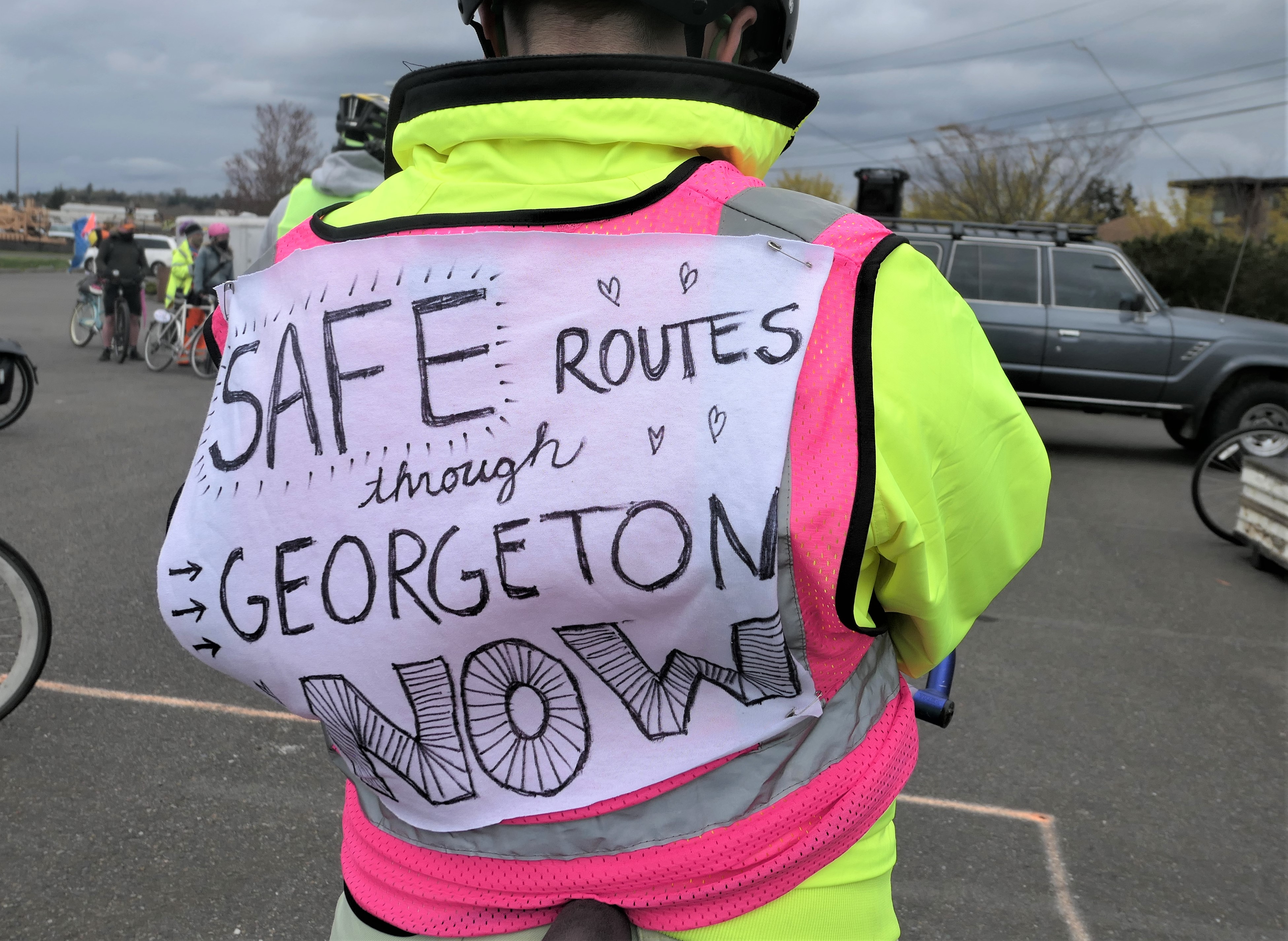 Within a span of two-and-a-half weeks, two people riding bikes have been killed by motor vehicles in Seattle--a sad statistic that highlights the lack of safe bike routes and the dangers people pedaling on Seattle’s streets face from inattentive or reckless drivers.

The first death occurred in the Georgetown neighborhood on March 24, when a truck ran over a 54-year-old man identified by authorities as Robert Miesse. A white “ghost bike” was erected at the busy intersection of Corson Ave South and South Michigan Street where Miesse died. 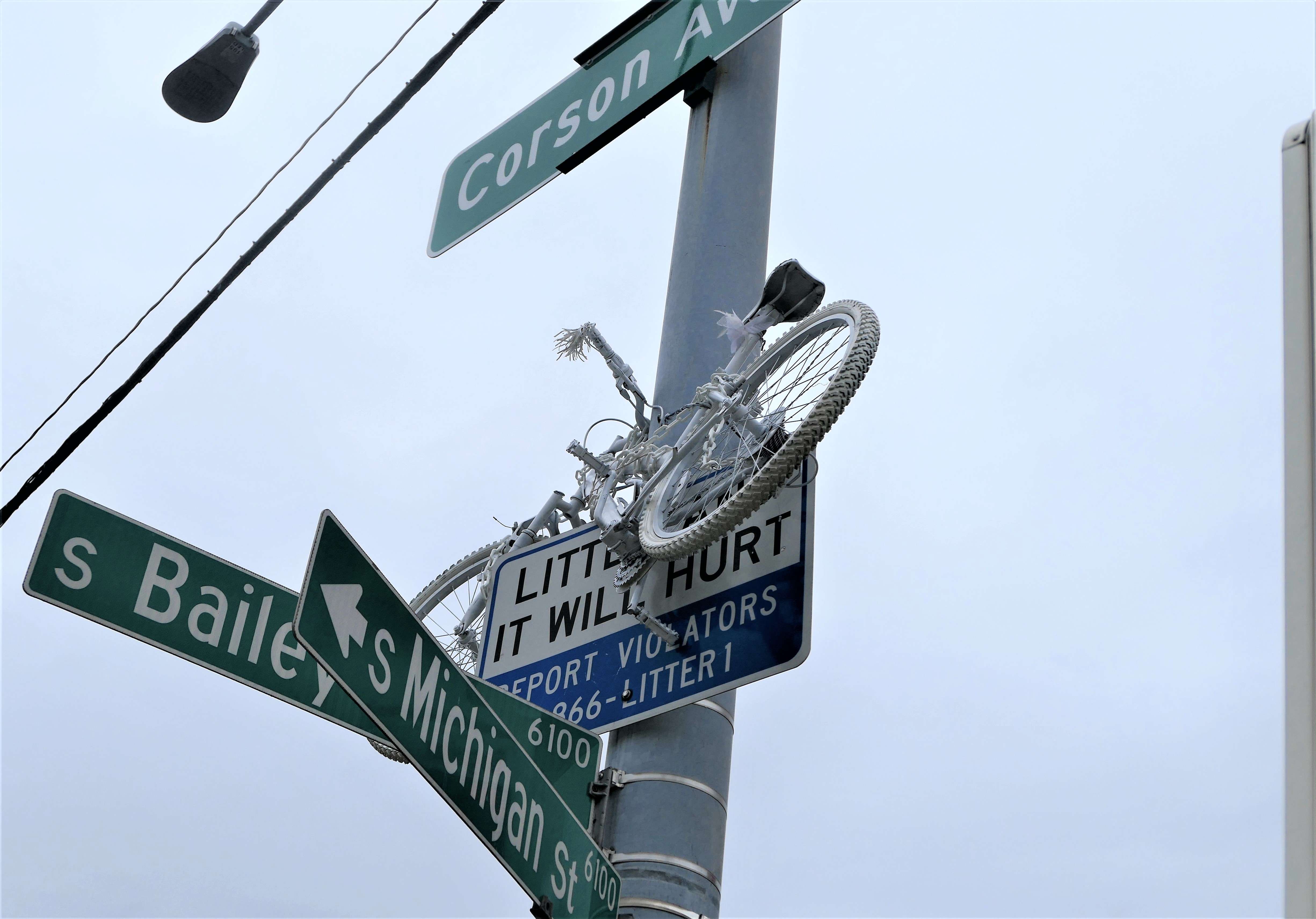 On Friday, April 9, dozens of people on bikes gathered to hold a community ride to remember Miesse--and call on the city to build more safe bike routes through Georgetown. 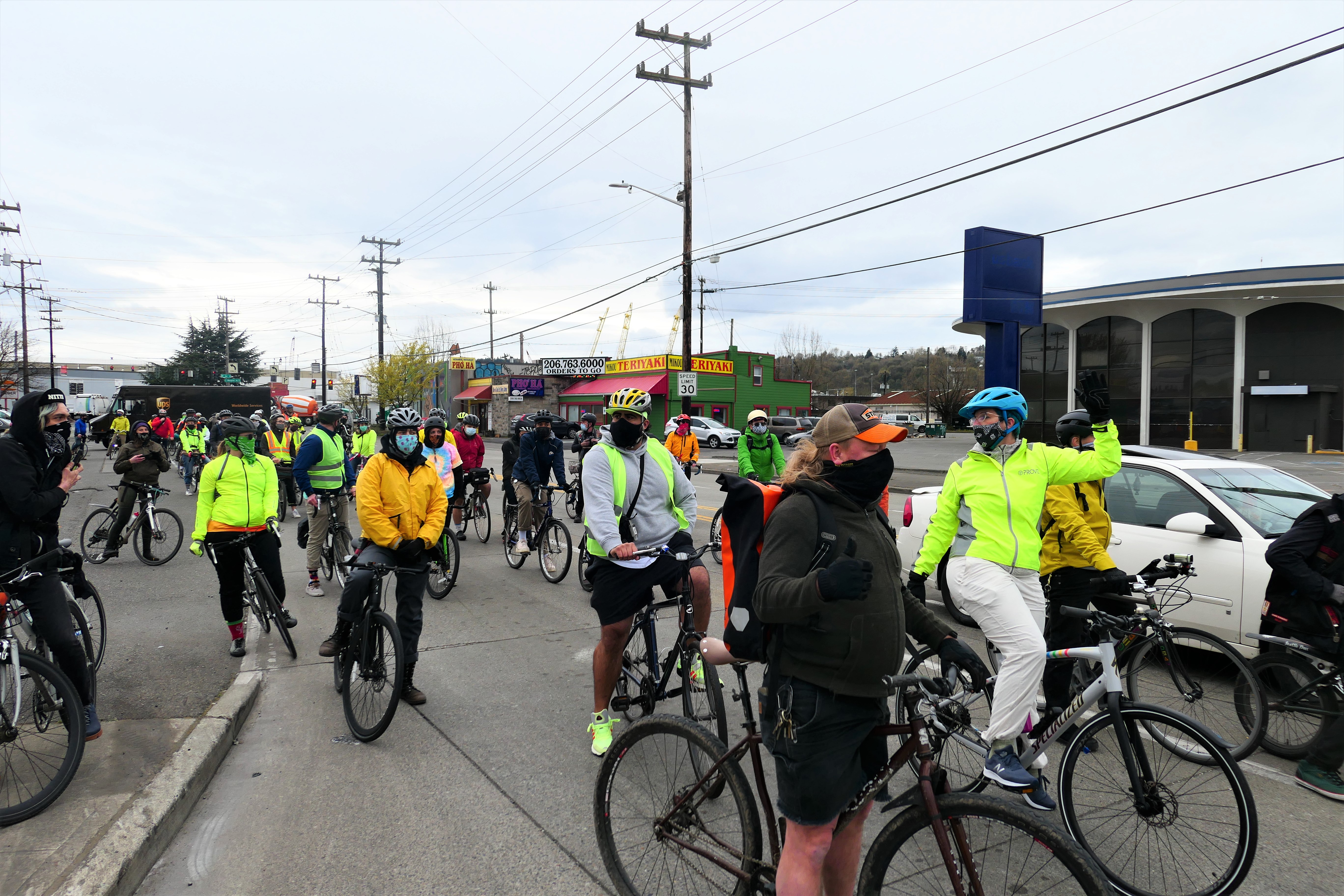 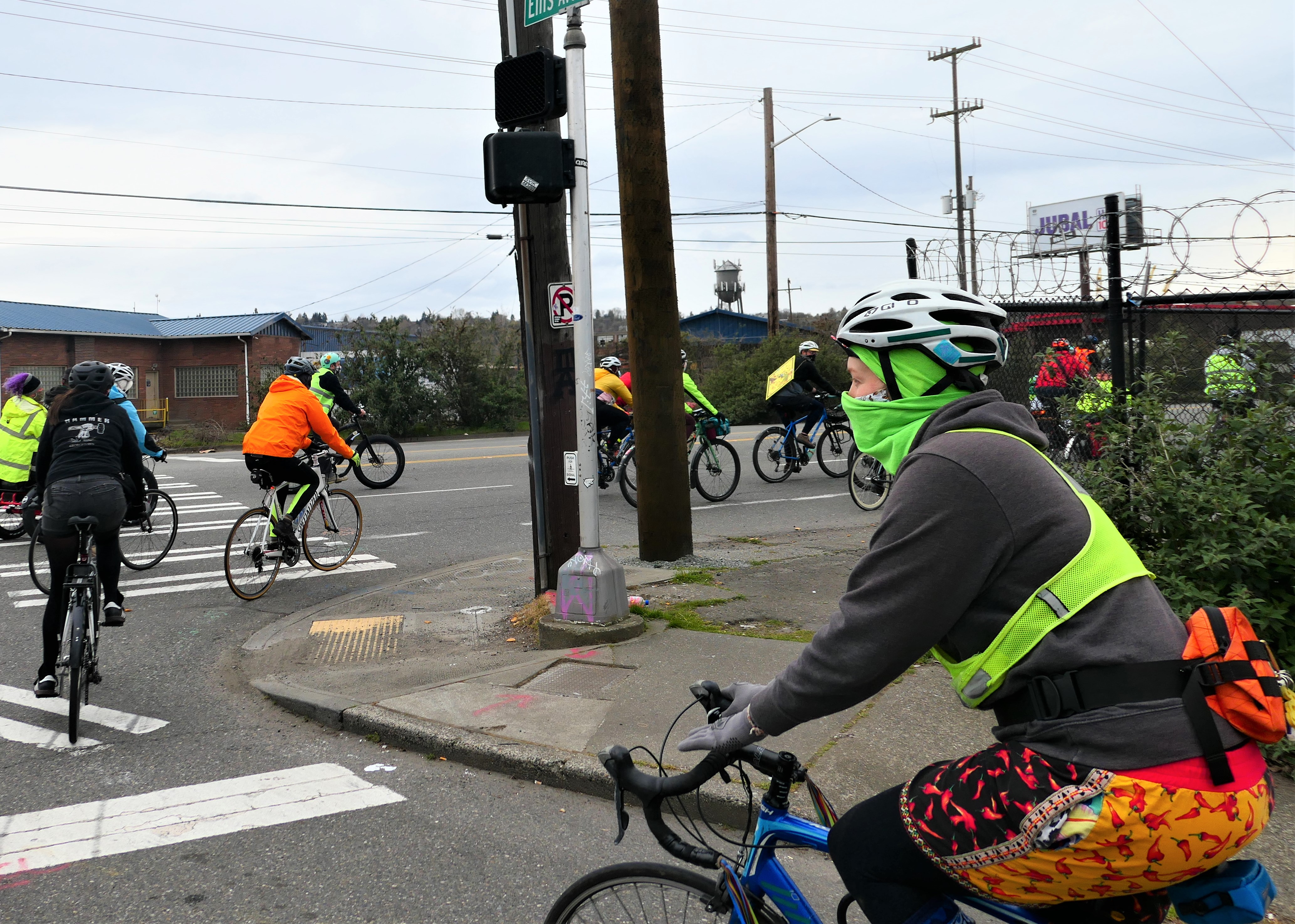 The second fatality, on Sunday evening, April 11, near Seward Park, was being investigated as a criminal hit-and-run crash. The identity of the 63-year-old man killed had yet to be released.

Cascade Bicycle Club sends its condolences to the families and friends of the two men killed, while also calling for faster action by the city to make its streets safer for people riding bikes.

Prior to the start of the community ride in Georgetown, a moment of silence was held for Miesse--and the driver of the truck who killed him.

Organizer Amy Horn told the crowd that the Georgetown neighborhood’s dangerous streets are even more risky for people on bikes now due to the extra traffic congestion caused by the closure of the West Seattle Bridge, which has forced people commuting by car to travel across overburdened bridges and routes through Georgetown and the nearby South Park neighborhood.

Horn noted that people driving “are angry and more aggressive because their commutes are longer.” 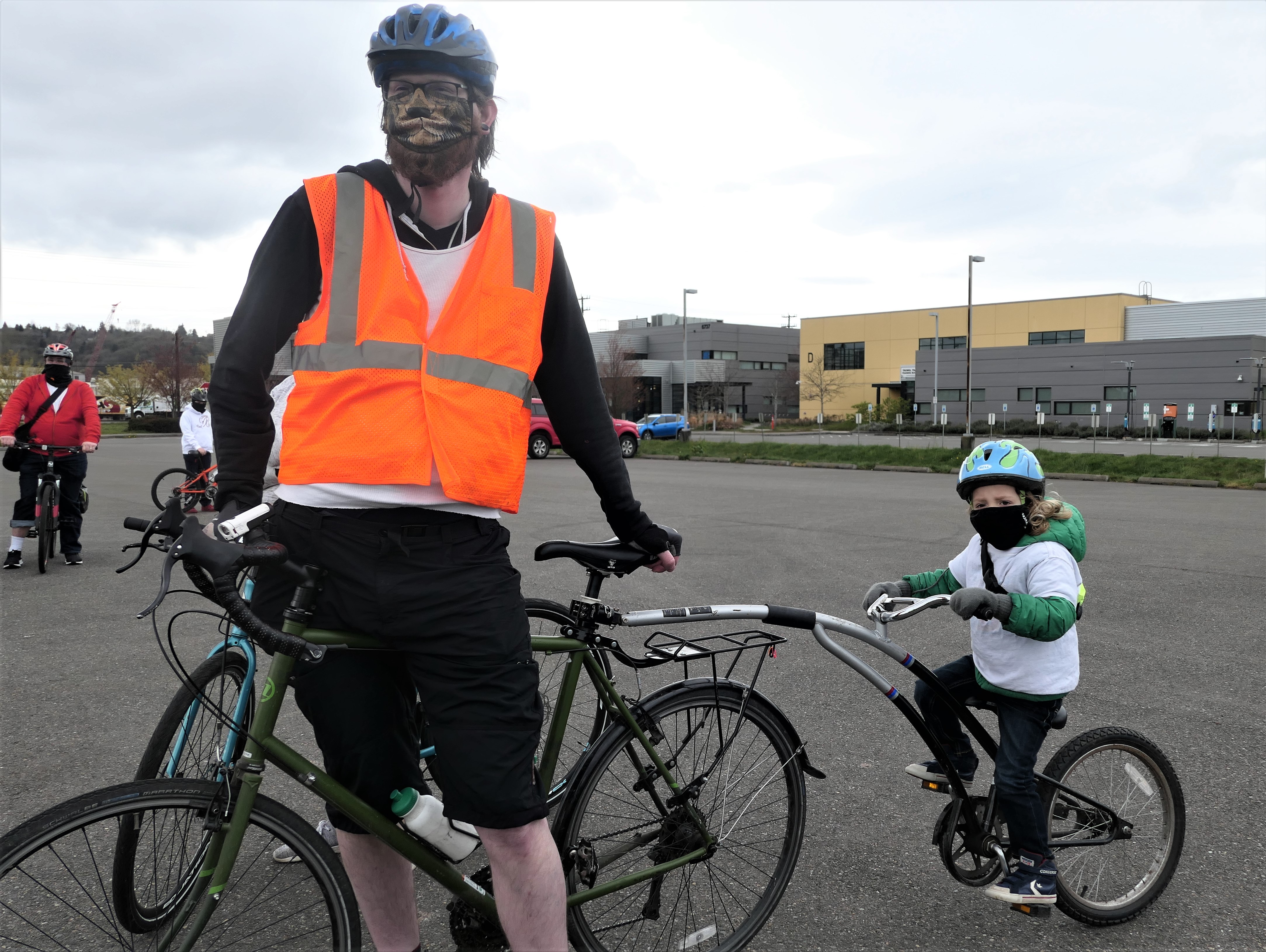 Peter St. John, pictured above, lives about a block from the intersection where Miesse died. He attended the memorial ride with his three-year-old son on the back of his bike. He was among several parents who came with their children. St. John said that Seattle has failed to invest enough in Georgetown’s safety, noting that there are several bike trails within two miles of his home, “but the danger within that two miles is excessive."

"To get there I have to cross train tracks, unmarked intersections, more train tracks, with a huge number of freight trucks and increased traffic," St. John said. "Our safety feels completely unprioritized.” 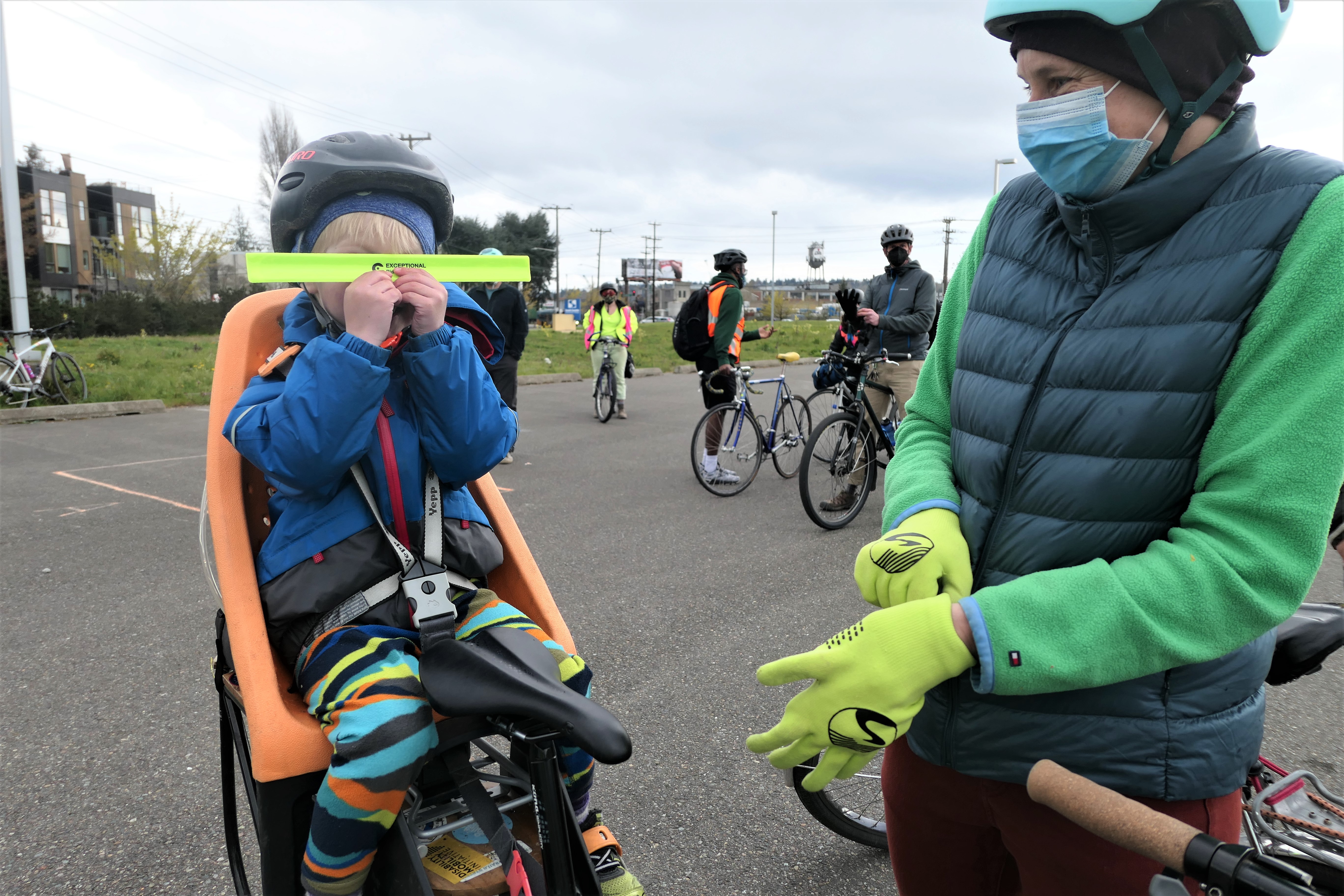 “We need to find ways to get the city to take action to give us safe routes, so we can coexist with big trucks,” said Donald Brubeck of West Seattle Bike Connections, pictured below in the red helmet. The ghost bike can be seen on the Corson Ave S pole. 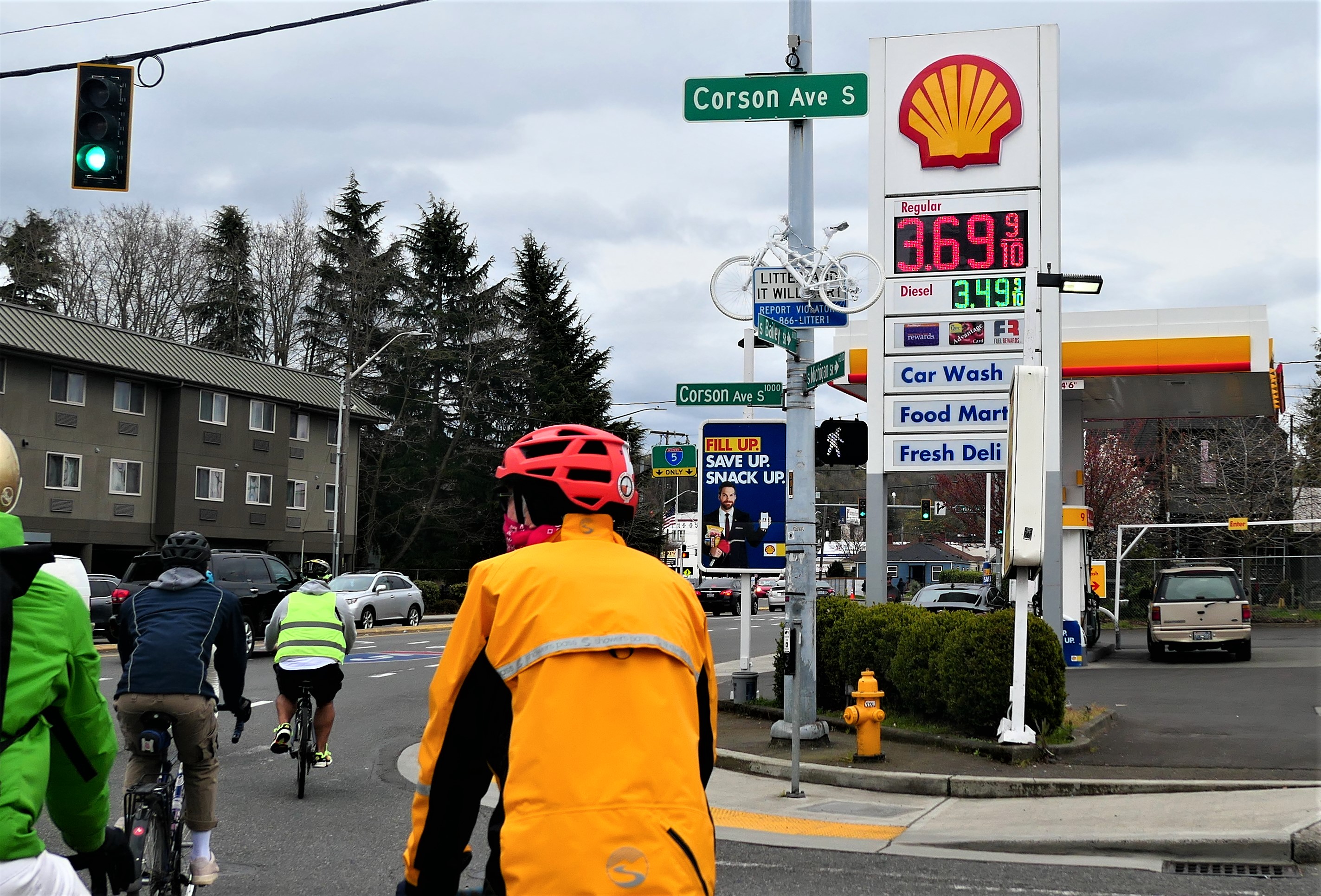 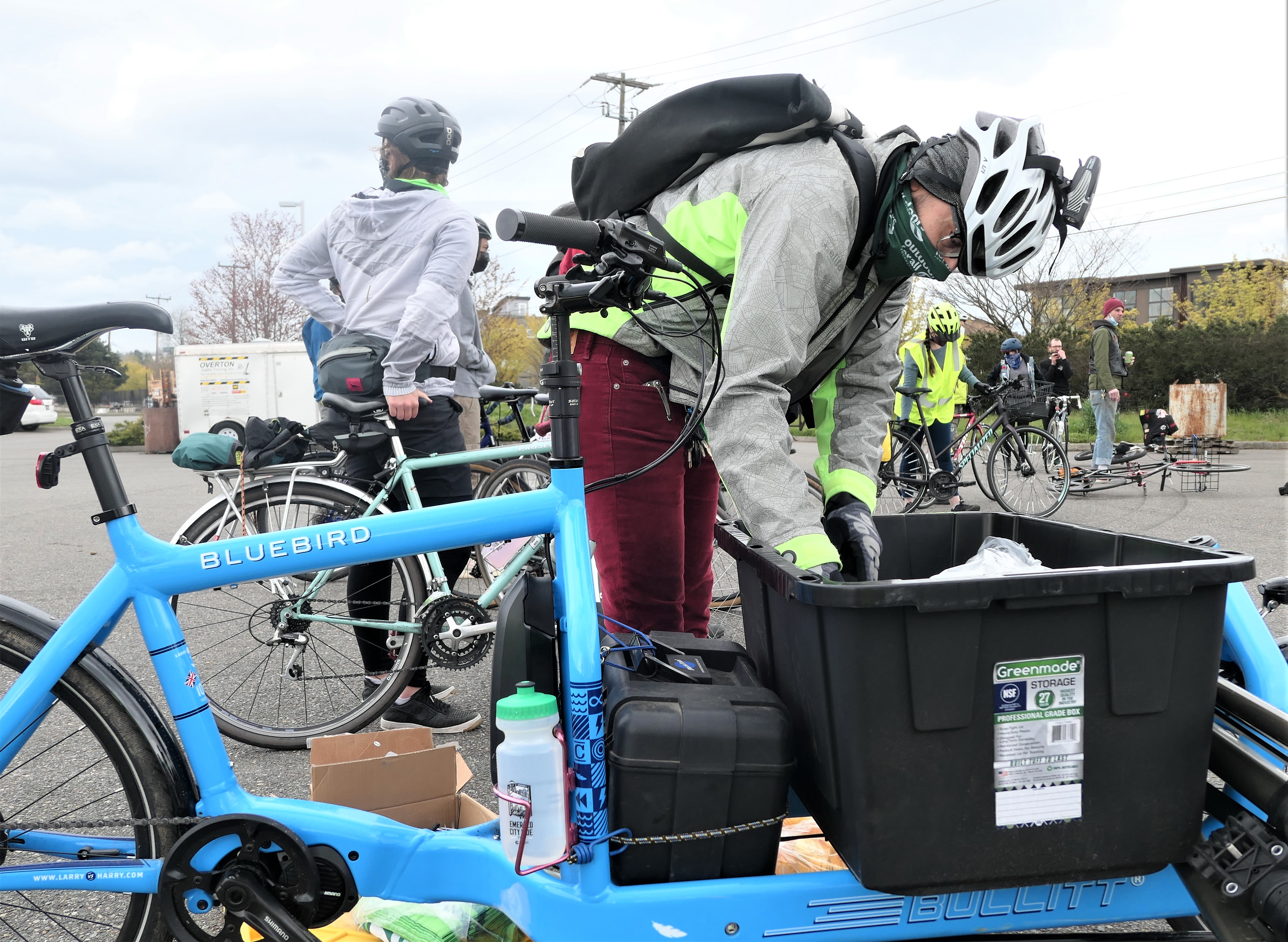 Some individuals wore homemade signs, and many dressed in bright clothing. There were trikes, cargo bikes, electric bikes, trailers and bicycles of all sizes and styles that reflected the diversity of Seattle's bicycling community. Attended by an estimated 75 people, the ride was both a somber remembrance and a joyous celebration of life--and the right to ride bikes. The group did several laps of a loop that brought everyone past the ghost bike several times, staying to the right side of the road and trying to remain courteous and kind to onlookers and people driving vehicles. 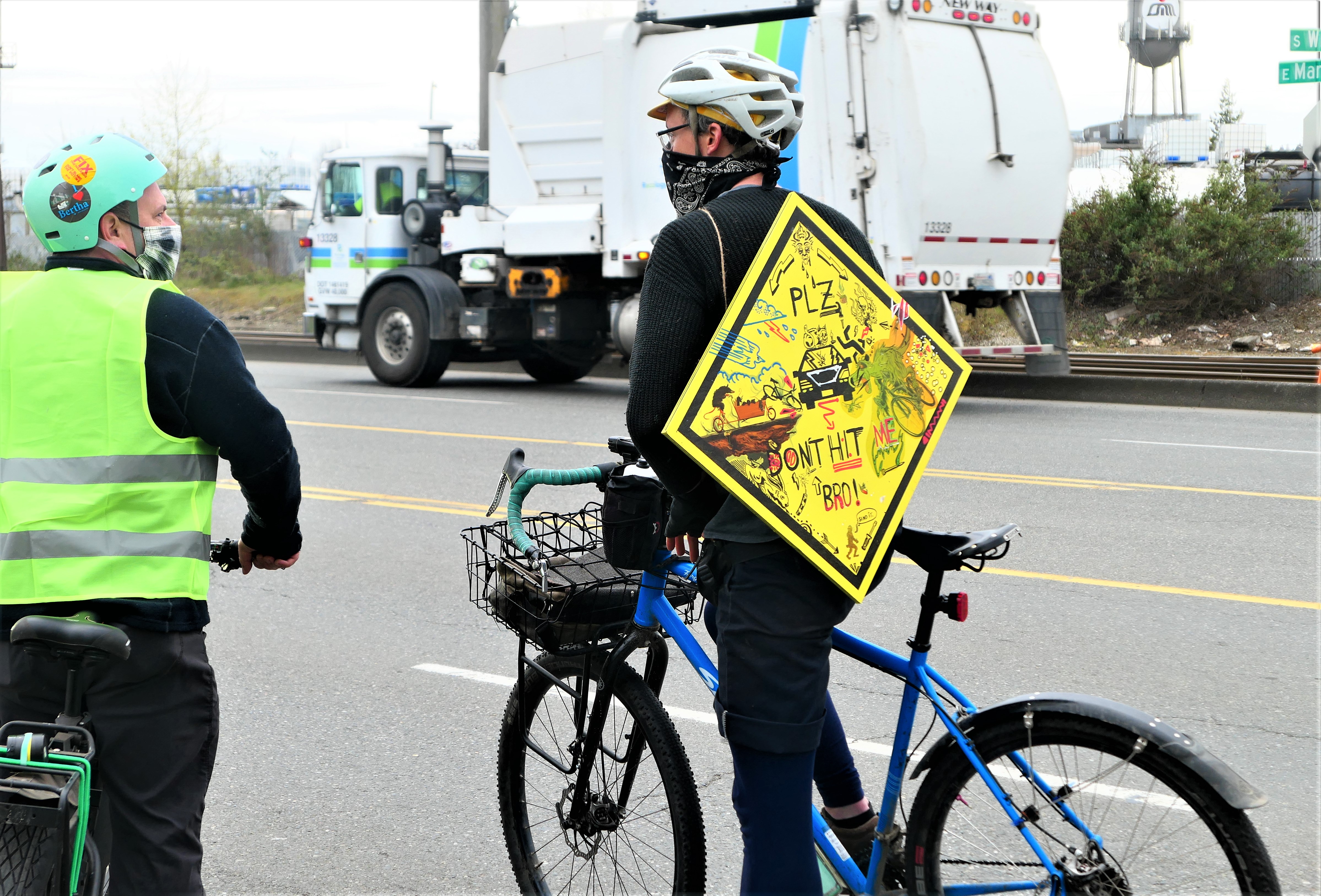 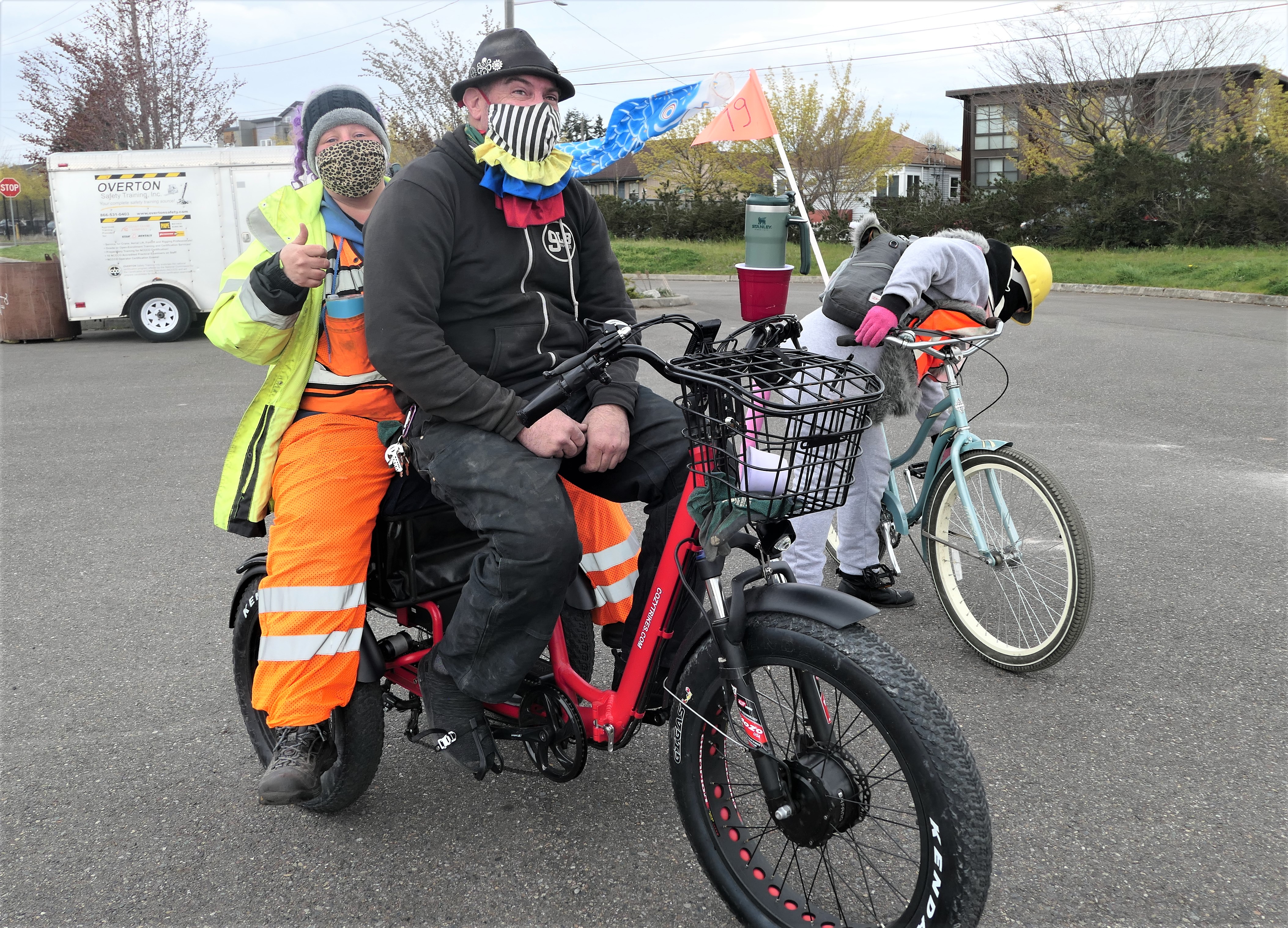 People driving cars were mostly courteous, although the driver of at least one car sped past at high speed, revving their engine and squealing their tires. 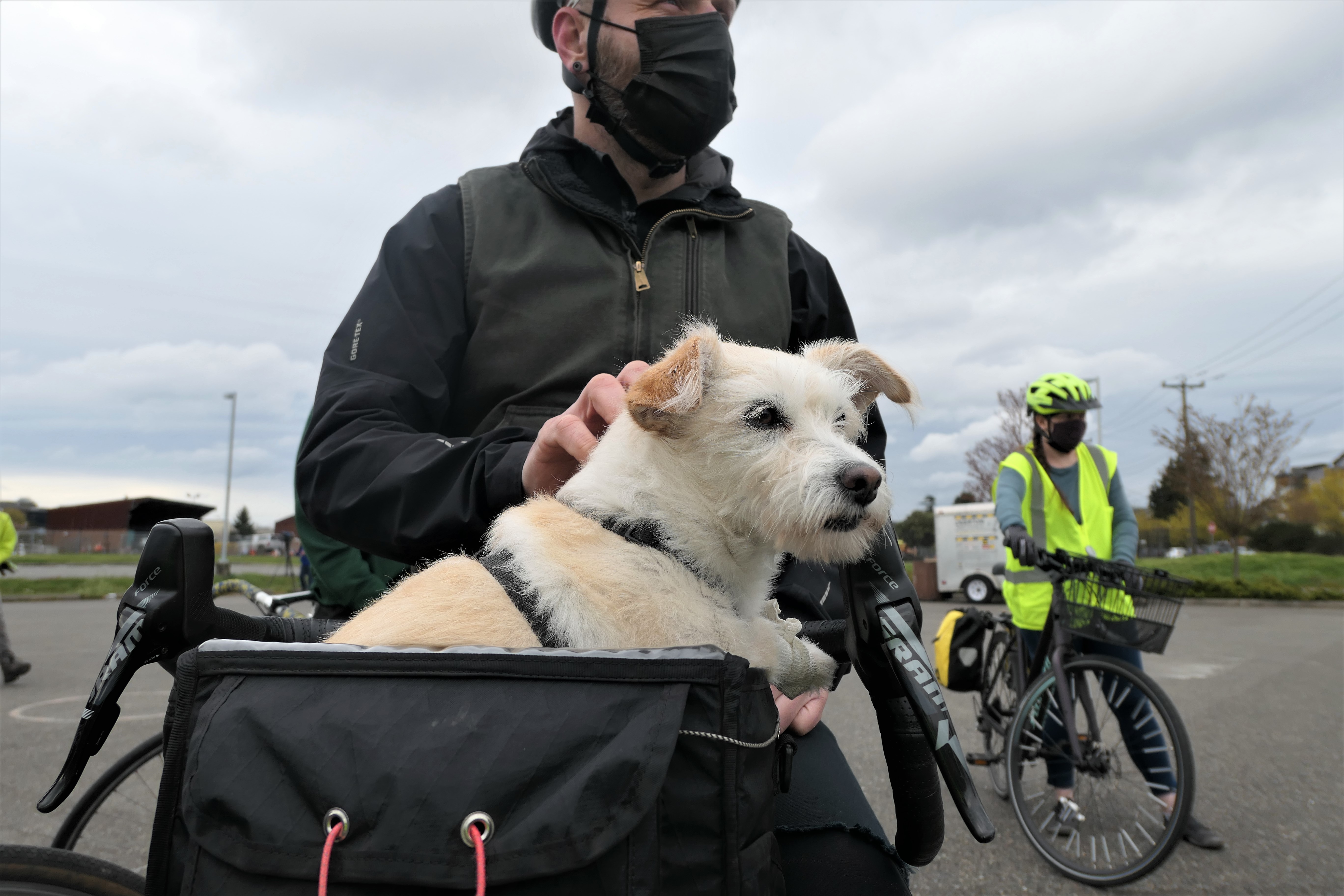 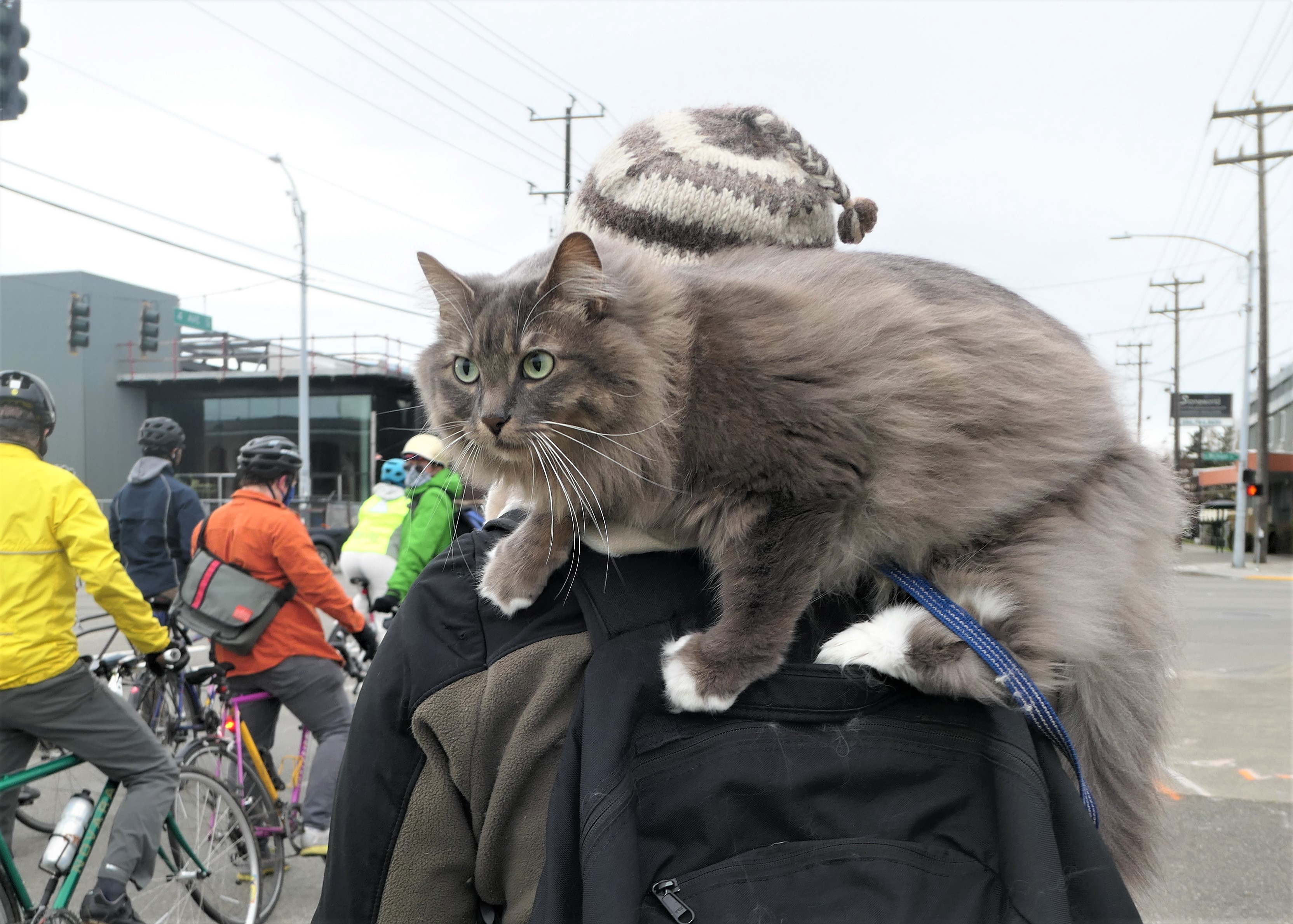 A cat that joined the ride looked, predictably, less enthused.

Cascade is calling upon the city to prioritize bicycles in its plans for fixing the West Seattle Bridge, as well as for the rapid completion of the Georgetown to South Park Trail. As a matter of semantics, Cascade also asks that people refrain from calling fatal crashes "accidents."

As a recent story in Bicycling stated: "Using the word 'accident' implies that the situation could not have been prevented. However, that is often not the case when it comes to drivers in cars hitting cyclists. 'Crash' is a better choice than 'accident' because it’s a simple factual statement of what happened." 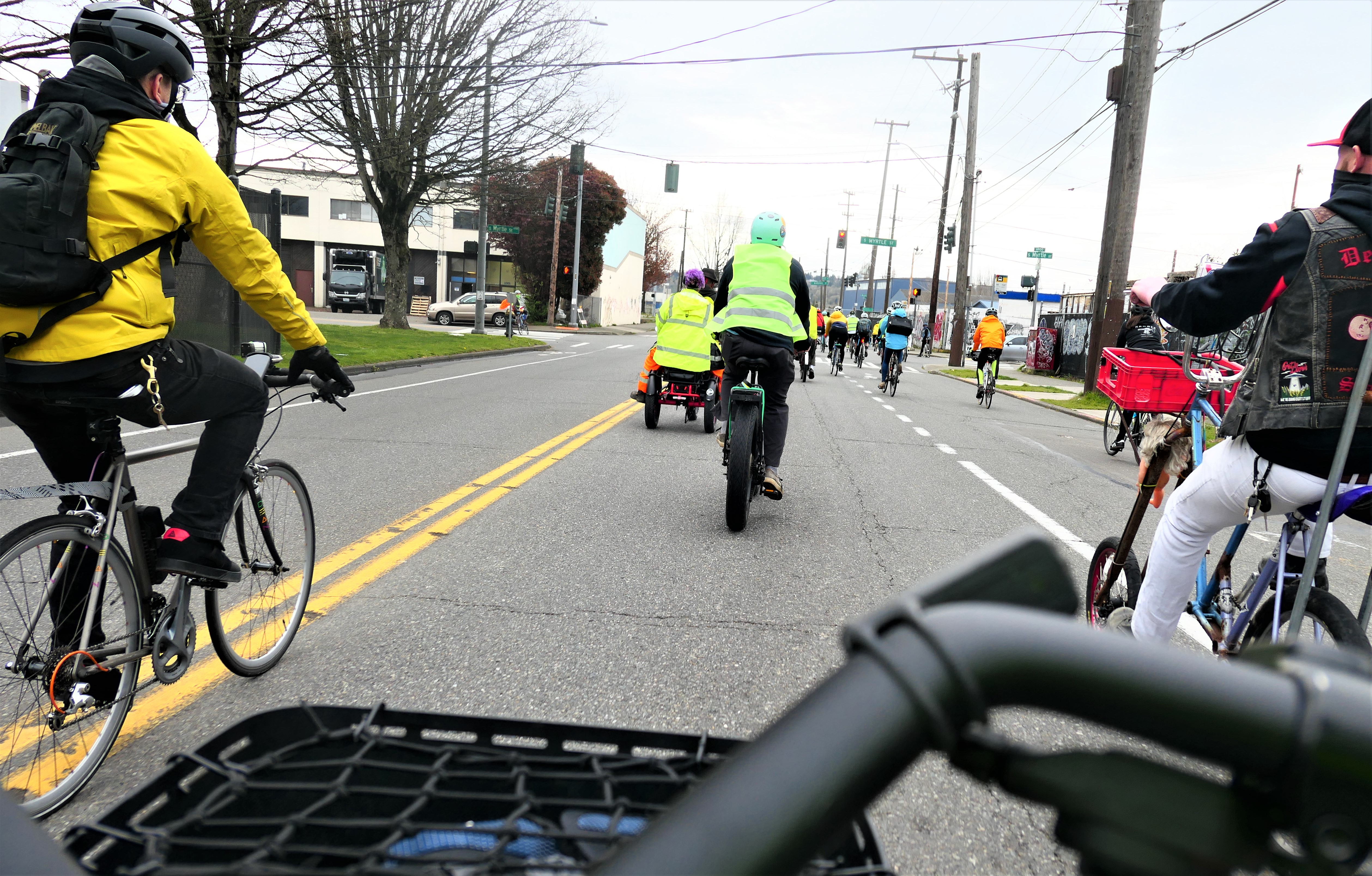