Funding for the highest priority bike safety projects was restored by the City Council after loud and resounding support from the public. As a result, we won commitments to complete the Georgetown to Southpark Trail, advance planning on two South Seattle bike routes and a route across I-5 between Wallingford and the U-District.

Since the mayor’s 2021 budget proposal landed on their desks in September, the City Council has been busy refining the final plan for how Seattle will spend its constrained resources in 2021, and ensuring the budget aligns with resident values, city policy and community priorities. Advocates, including Cascade Bicycle Club and our partners in the MASS coalition, have played a role too. We have  worked closely with council members to articulate priorities, and ensure critical mobility and safety projects that were both in the draft budget were not omitted and “left on the cutting room floor” during the fast and furious budget process.

All of the MASS coalition priorities slashed by Mayor Durkan’s budget proposal were reinstated,  ensuring that the city doesn’t make up for its COVID-related revenue shortfalls at the expense of the city’s most vulnerable road users-- people walking and biking. The city has under-invested in communities most impacted by traffic deaths and serious injuries for decades, and now is the time to right that ship. 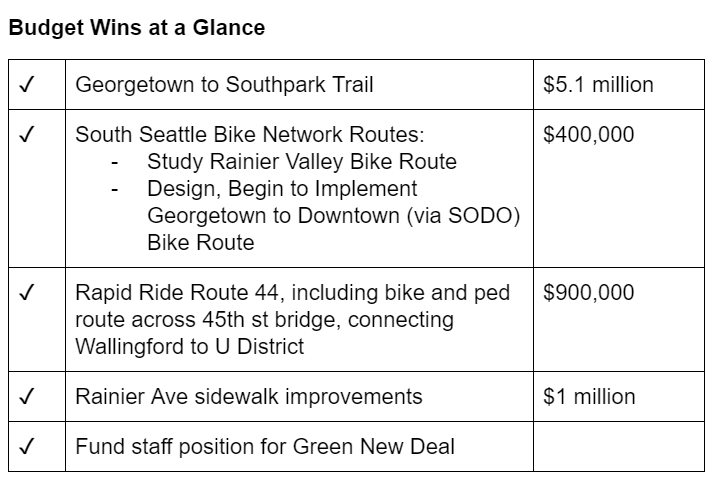 Connecting these two neighboring communities safely by walking, biking and rolling has been a community priority for decades. Some Council funding in 2018 got the project moving to design, but its fate was unclear until this budget season when Council sent a decisive message in support of the project by fully funding it through completion. Watch these two recent videos to learn more about the import of the project to the Black, Indigenous, and People of Color communities it will serve, as well as the broad community backing the project enjoys. Thanks to this new funding, a complete Georgetown to Southpark Trail is in sight for 2022. Current walking and rolling conditions between Georgetown and Southpark are not safe.

Council reinstated funding for the  planning and design of  two South Seattle bike routes:  one through Seattle’s  Rainier Valley, and another  through SODO that will connect Georgetown to Downtown. This was a hard-won victory.  The 2019’ Bike Master Implementation Plan scaled down promises of bike safety and mobility projects across the city. Community input reinstated funding for several projects, including the route through the Rainier Valley (along MLK) and Georgetown to Downtown (via SODO). This funding is long overdue for the many people who already bike through these areas every day. We will need to make our voices heard to ensure the city completes these projects that will serve people walking and biking, regardless of their skin color, age, or ability, who have been overlooked for too long.

Bridging I-5 between Wallingford to University District

Thanks to Council, a safer walk, bike, roll route across I-5 at the NE 45th St bridge is still possible,  but likely not on opening day of the Roosevelt Light Rail Station in late 2021. This station will draw riders from many NE Seattle neighborhoods, and the city has already advanced some key routes to help people arrive safely by bike--including bike lanes on NE 65th Street and 15th Avenue NE. But a safe connection from Wallingford across I-5 is still missing. SDOT has a plan to bridge this gap, but it’s on hold pending full funding plus approval by WSDOT. This new funding will help inch the project forward. Find out more about the proposed improvements here.

Sustained from the Mayor’s Budget: Key Projects to Connect Seattle by Bike

It’s worth noting that these new budget additions are by no means the only bike network improvements that will advance via the 2021 budget. The Mayor’s proposed budget included retaining full funding for a handful of projects:

Our collective success in winning funding in the Seattle 2021 budget provides an important lesson: If we unite and speak up, people who support active transportation, and who bike, walk, and roll, can win important funding that makes our communities safer, healthier, and easier to navigate. Civic engagement is important, and we welcome your support.