For one longtime Cascade member, buying a custom-made e-bike from a Seattle shop has made riding fun again. 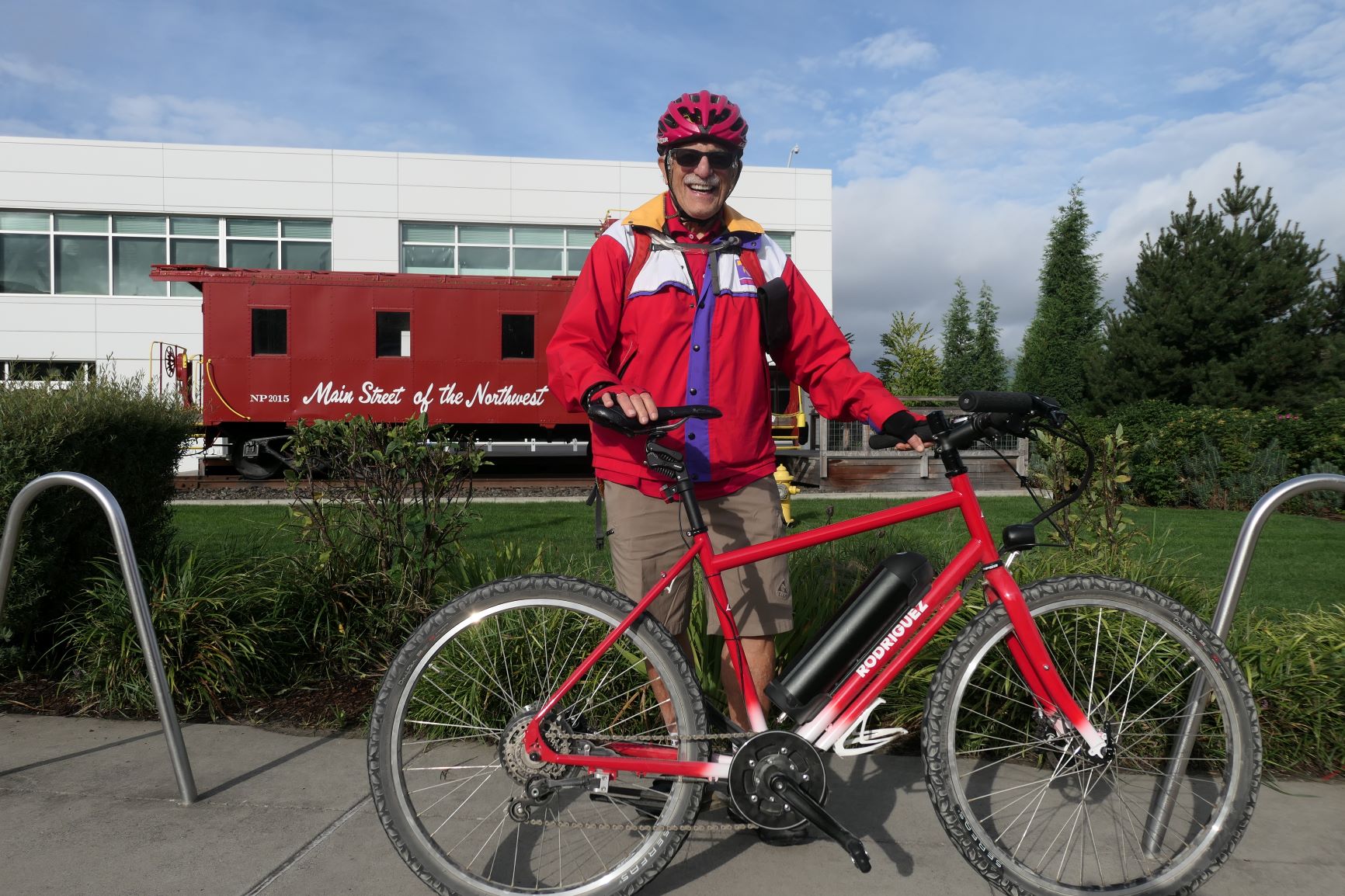 “It has changed my life. I absolutely love it,” says Goldberg, 81.

A Cascade member for three decades, Goldberg was finding it harder to keep up with his younger cycling friends when riding his road bike. “I live on a big hill, and it was getting to be a struggle to get home.”

Thanks to the pedal assist, Goldberg is again braving long rides of 50 miles or more. He still pedals hard on flat ground, keeping the level of electric assistance in “low” to preserve his battery. “But when I get to a hill, I crank it up, and it’s like the hill isn’t even there.” 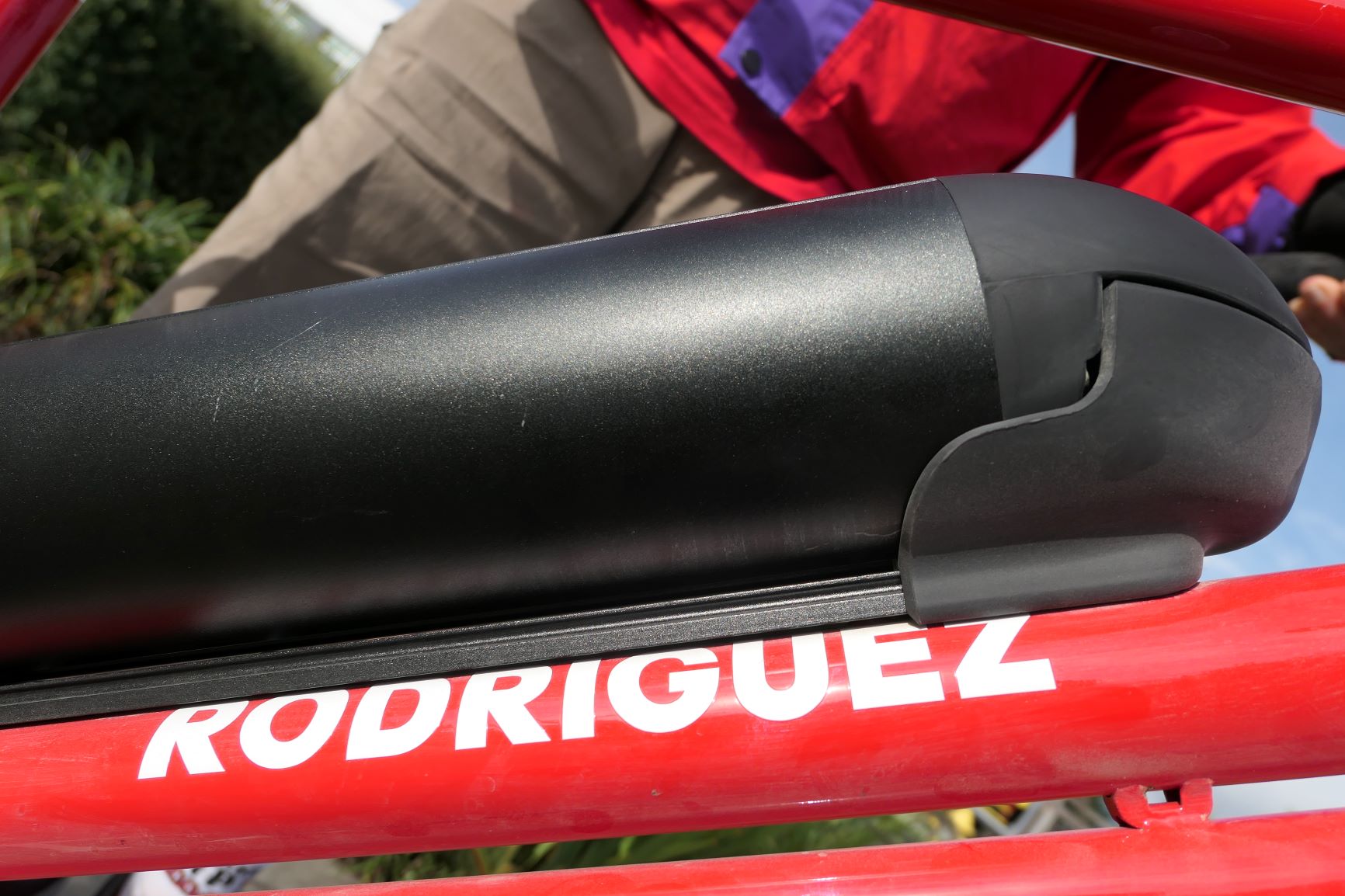 Goldberg's battery gives him about 60 miles of range.

Goldberg, who turns 82 in December, is among the growing number of senior Americans who are joining the e-bike revolution. Sales of electric bikes are booming nationwide, increasing 190 percent in June compared to the same month a year earlier, according to data from the NPD Group.

Electric bike sales are also catching fire in Seattle, the hometown of Rad Power Bikes, a Cascade supporter, which reported a 297 percent increase in April.

Sales have also increased for the IZIP e-bike brand. "The COVID-19 crisis has stimulated a never-before-seen increase in bicycle ridership and sales,” says Annie Crandall, brand manager for IZIP, which partnered with Cascade to create maps and videos for Seattle residents impacted by the West Seattle Bridge closure.

Electric bikes are ideal for hilly cities like Seattle. Studies show that electric bike users get as much or more exercise than riders of traditional bikes because they tend to ride more often and further. This makes e-bikes a sustainable and healthy alternative to driving. Getting people out of cars and onto electric bikes reduces traffic congestion and greenhouse gas emissions that are causing the climate crisis.

People on e-bikes can get around the city without breaking a sweat as on a regular bike. “With the West Seattle Bridge closing, people soon discovered traveling by e-bike was the fastest and easiest way to get to their destination,” Crandall says. 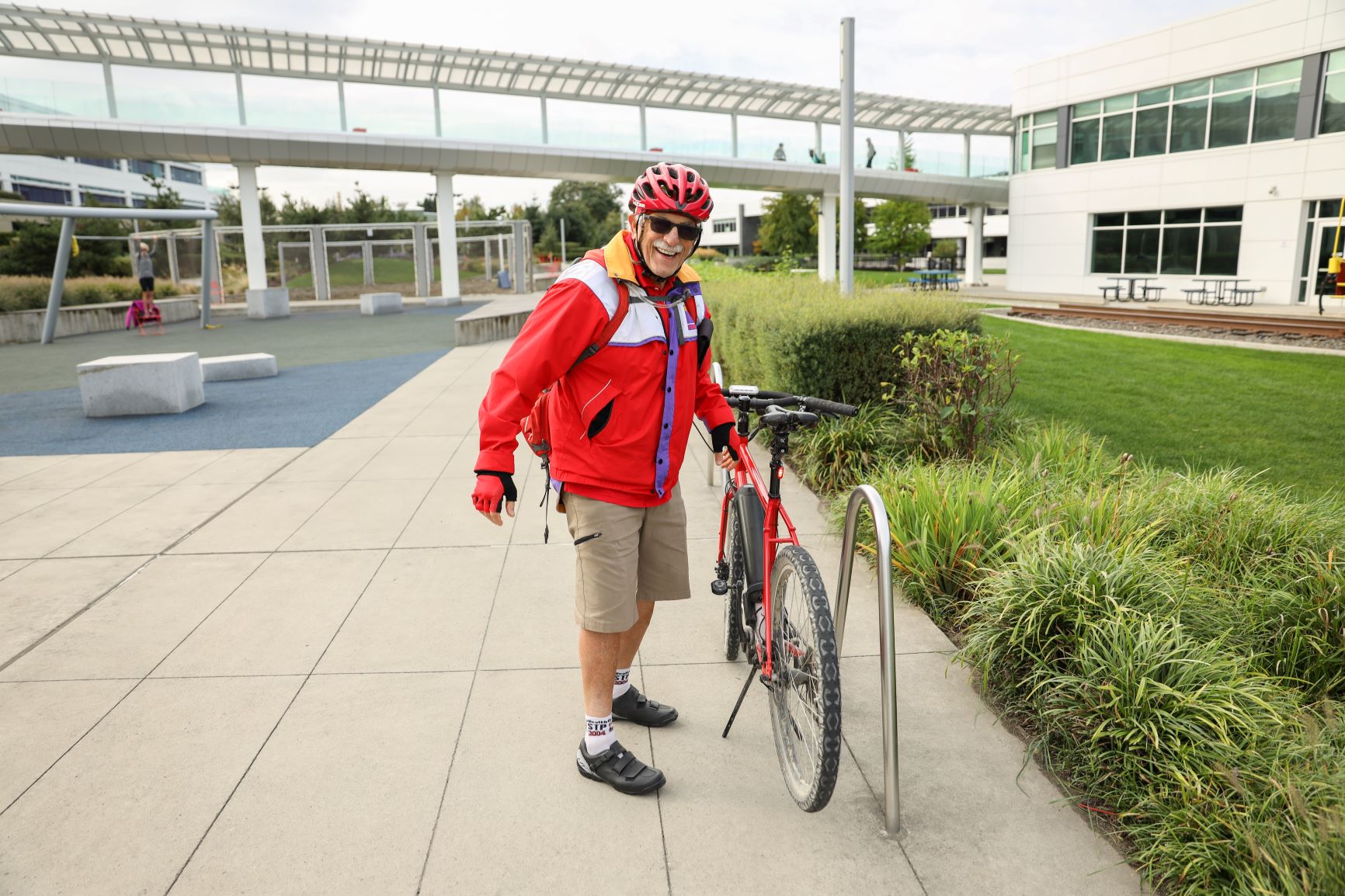 For Goldberg, who lives in Bellevue, buying an e-bike was about staying fit and happy. I met him in Kirkland along the Eastrail, where he was volunteering for a Cascade photoshoot. “In the month or so since I got it, I’ve been getting out almost every day,” he says.

Goldberg usually rides to Renton and then connects with the Green River or Interurban trails. He serves on the STP committee and has done the Seattle to Portland ride 29 times, and he rode the Virtual STP this year. Goldberg bought his e-bike from Seattle’s R + E Cycles, which builds custom bikes.

Custom or handmade bikes are a niche product, but they allow a customer to get a bike that is designed just for them. Custom bikes and e-bikes are more expensive, however. Goldberg says his firetruck red Rodriguez cost about $5,600. That compares to as little as $1,100 for some electric bikes, such as the RadMission by Rad Power Bikes. 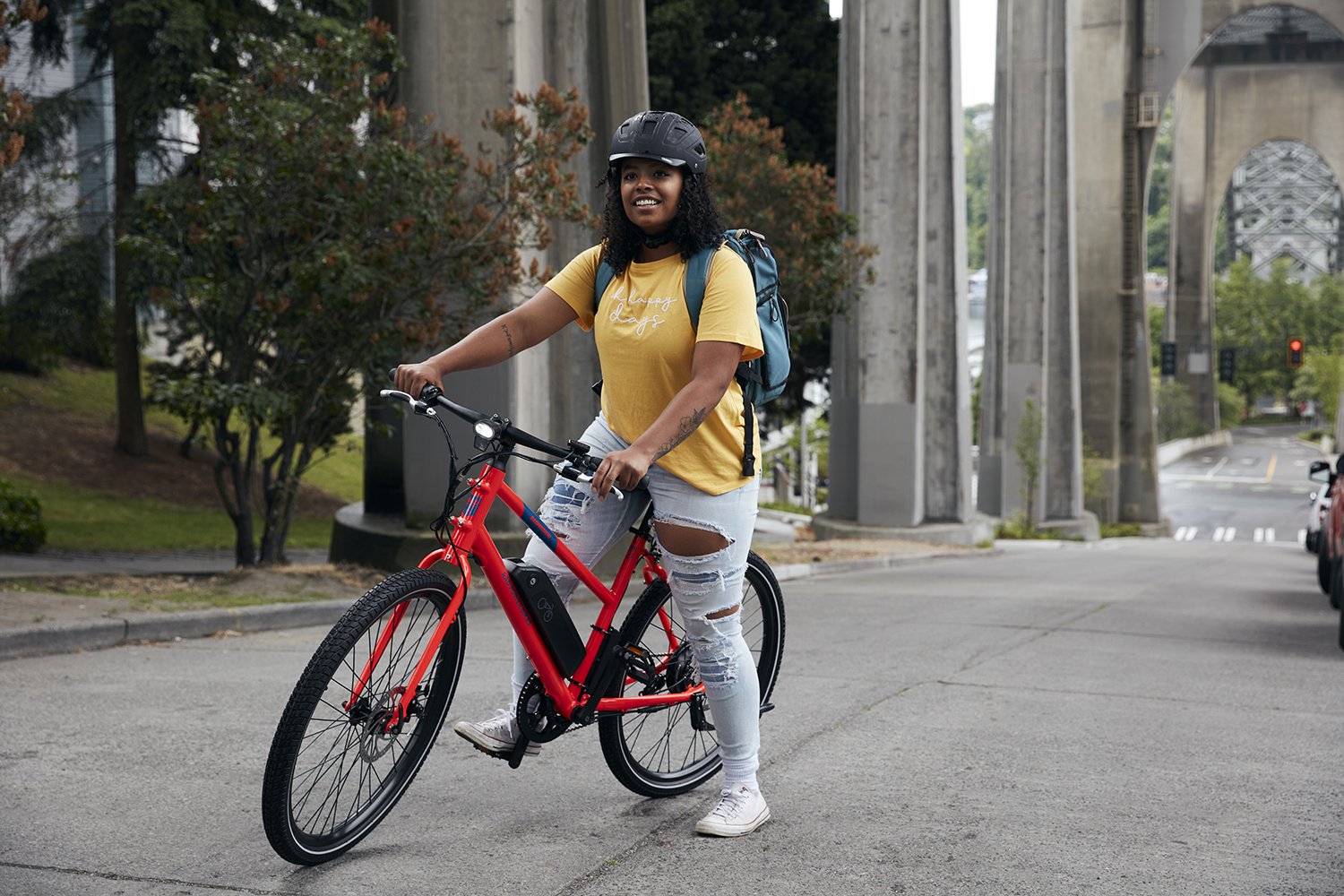 Goldberg doesn’t mind paying more for a frame welded and assembled in Seattle. The e-bike is the third bicycle he has bought from R +E.

Goldberg's e-bike has a suspension seatpost to cushions bumps, an electronic shifting system designed by R + E, wide tires for better traction, and a comfortable geometry more akin to a mountain bike. 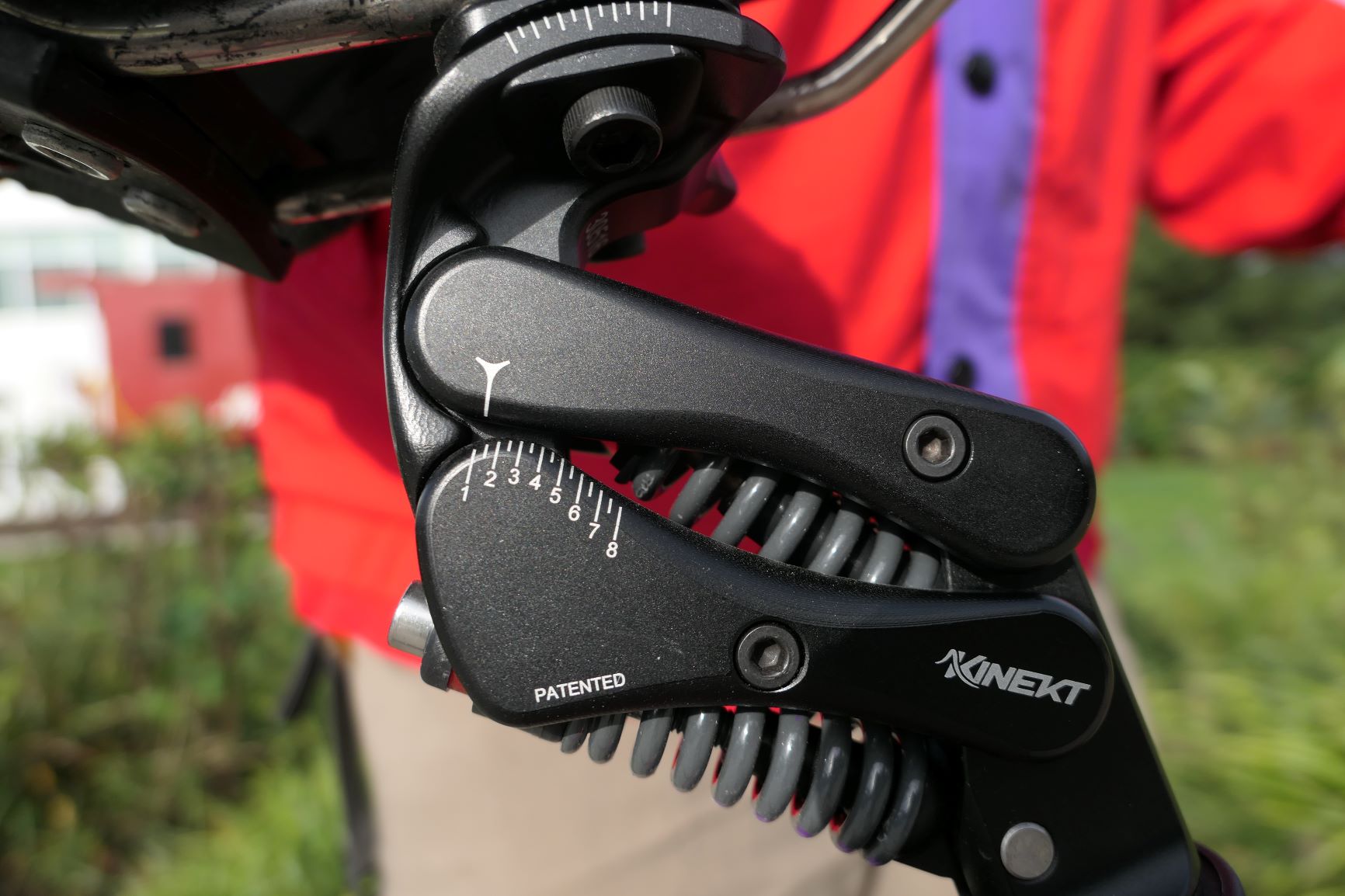 “Our e-bike sales are doing very well and have gone way up,” says David “Smiley” Madison, who oversees sales and bike fitting at R + E, located in Seattle’s University District. Founded in Seattle in 1973, R + E launched its electric bike line two years ago due to growing customer demand. Their e-bike is called the Distruptor and costs between $5,000 and $6,000.

One other thing that Goldberg loves about his e-bike: the color. All three of his custom-made Rodriguez bikes have been the same bright red. “It’s hard to miss me on the trail,” he says. If you see Goldberg on his bike, make sure to say hello, but good luck keeping up with him on the hills. 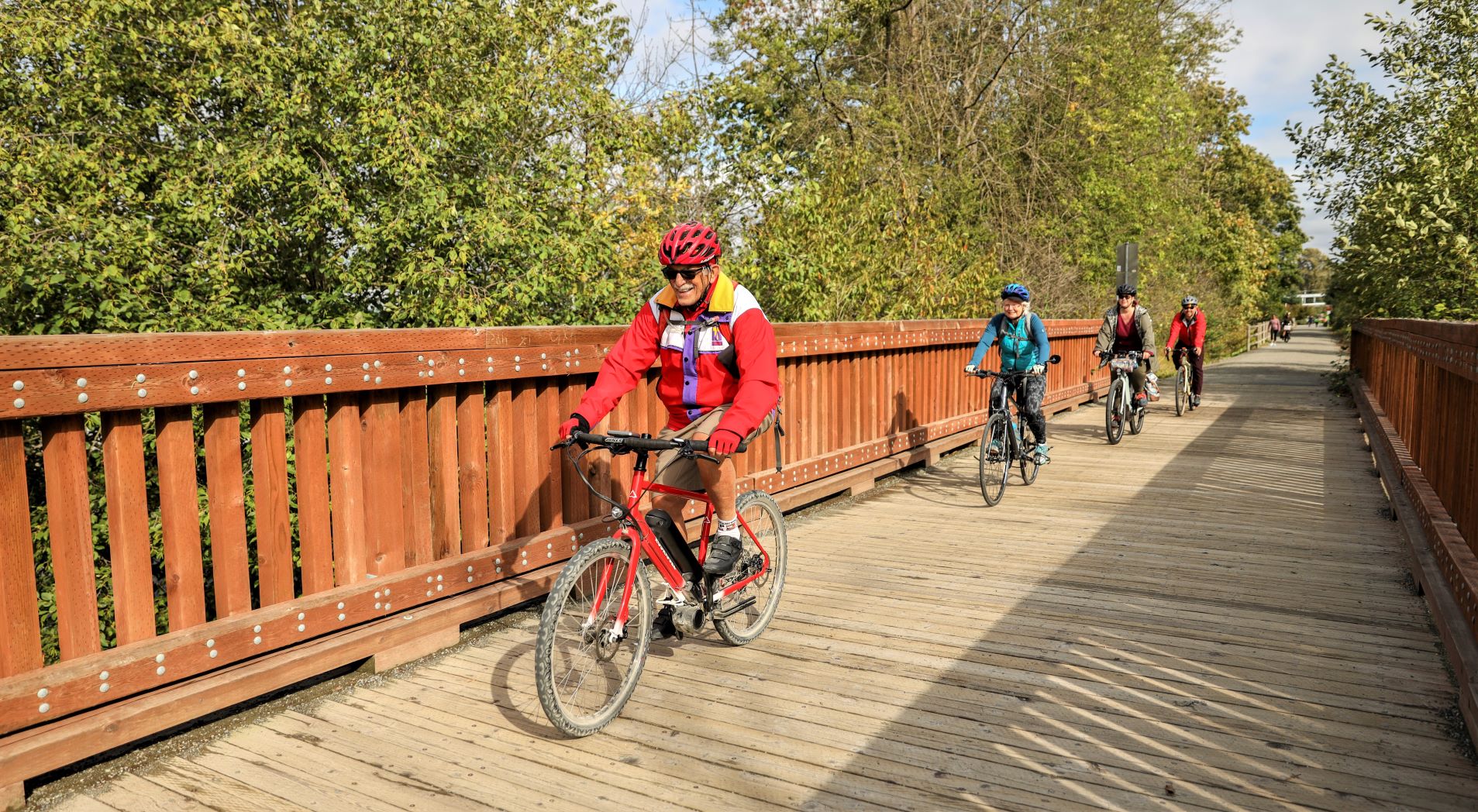