Re-launching MTP took months of planning and logistical work due to COVID-19. But for the youths participating, the resumption of weekly rides is an opportunity to get outside, explore, and bond during a time of social isolation. 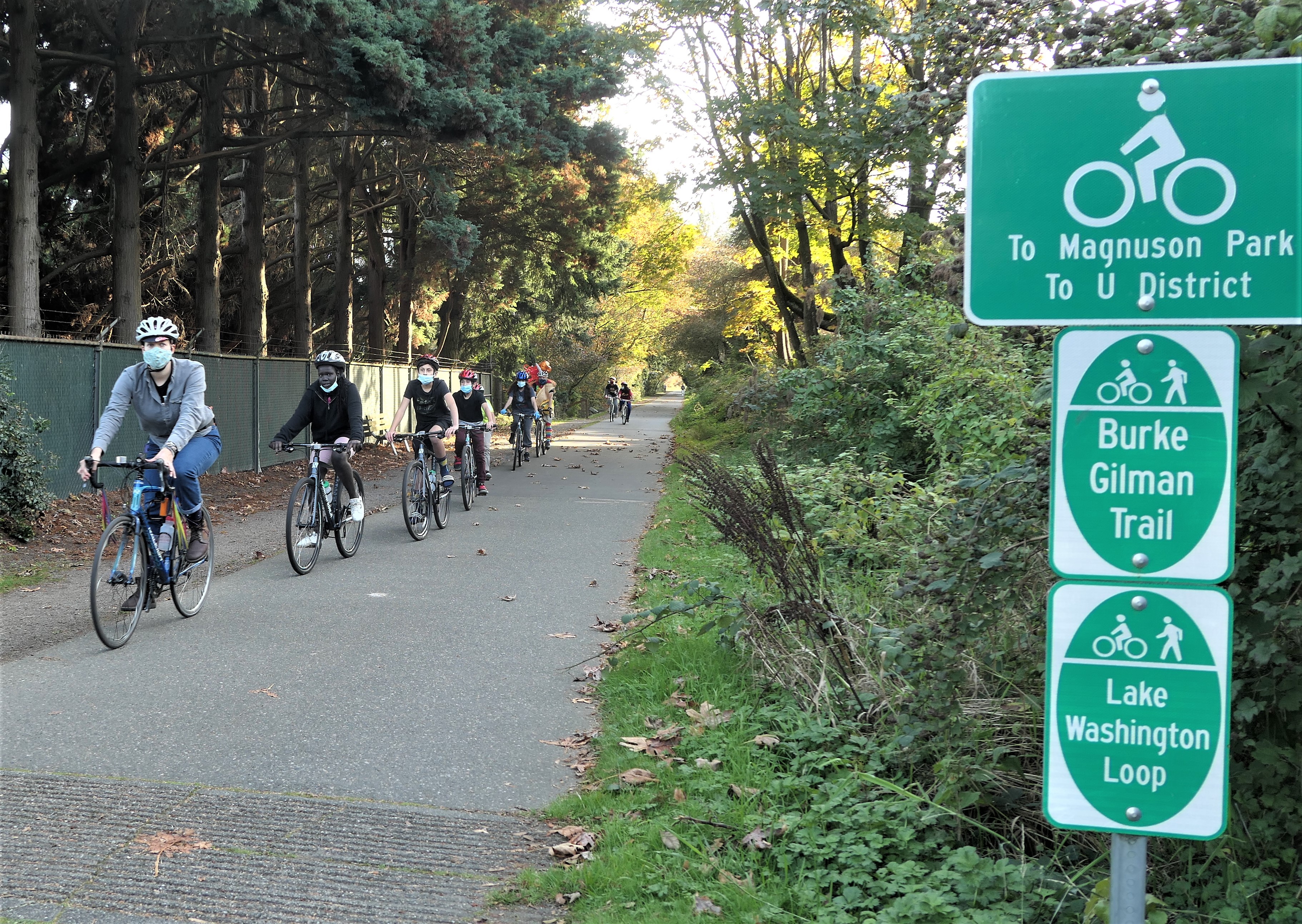 A group of teens and adolescents pedals up the Burke-Gilman Trail in Seattle on a crisp fall afternoon, marking the return of one of Cascade Bicycle Club’s most popular programs--the Major Taylor Project.

The kids are chatty and happy to be outside riding bikes after months of indoor activities and social isolation.

The adult instructors are also excited to be back in the saddle doing what they love--teaching young people the joys of riding bikes.

“It feels so good to be outside riding and doing something tangible again after all the planning and waiting,” said Cascade Education Coordinator Amy Korver.

The Major Taylor Project (MTP) consists of leadership development, weekly rides, local park explorations, opportunities to train for and ride in major cycling events, and a chance for students to build and keep their own bikes. In a typical year, the project reaches hundreds of youths annually in underserved Seattle-area and Tacoma neighborhoods where residents speak more than 70 languages and represent more than 80 nationalities. Many graduates go on to careers of service and civic engagement. 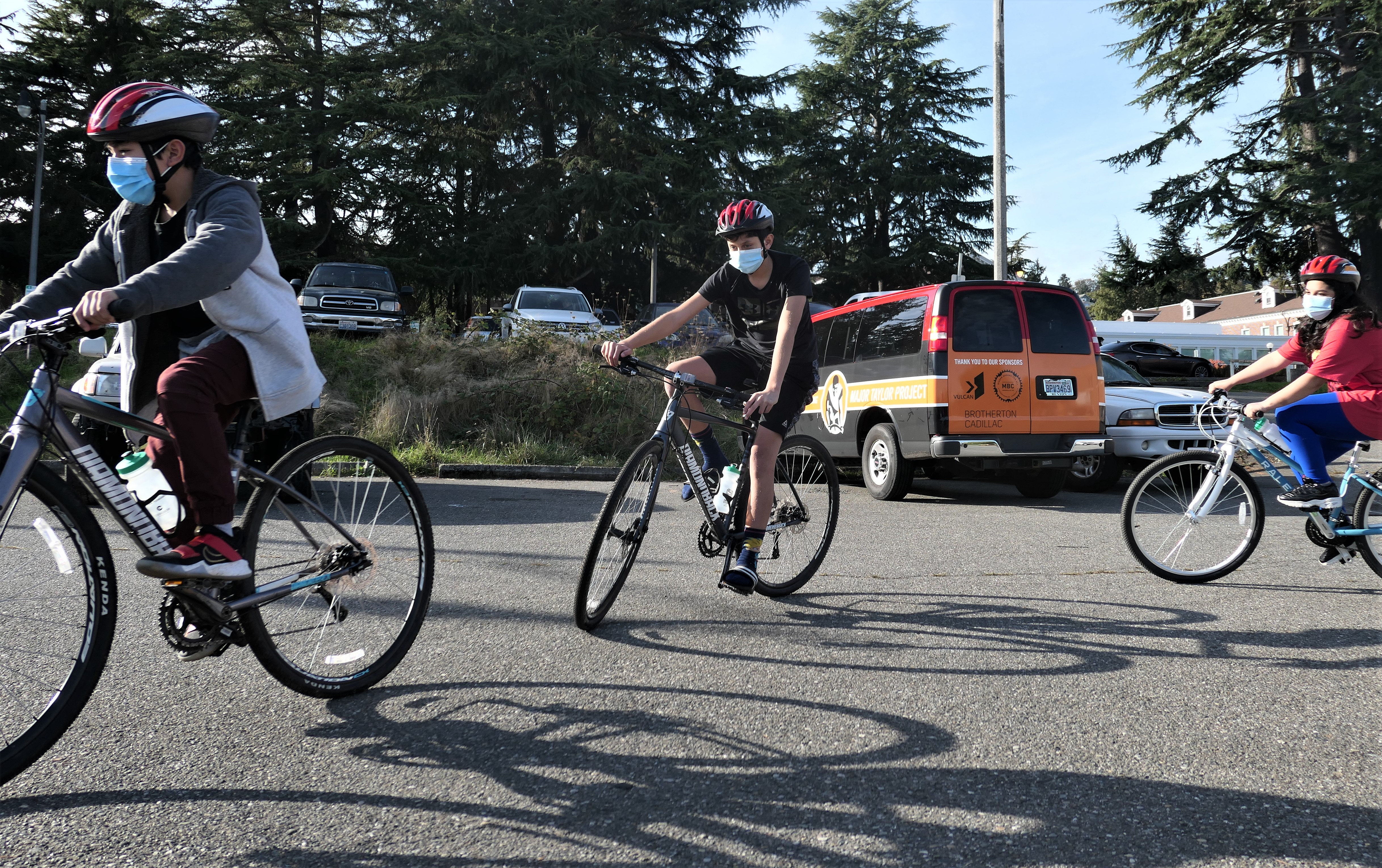 Practicing their turns before hitting the Burke-Gilman Trail.

Canceled in the spring at the outset of the pandemic, MTP has resumed in a limited format at five locations in Seattle and Tacoma, with each riding group limited to five students due to COVID-19 safety guidelines. Forty youths are participating in the truncated six-week session, which began in mid-October and will run through Nov. 20.

“My favorite thing about riding bikes is going to new places,” said one of the girls participating in a session that began at Magnuson Park recently.

“I like MTP because it’s really good to come outside and exercise,” another girl said.

“I like riding bikes because I’m really hyper and I like to eat a lot,” said one of the boys. 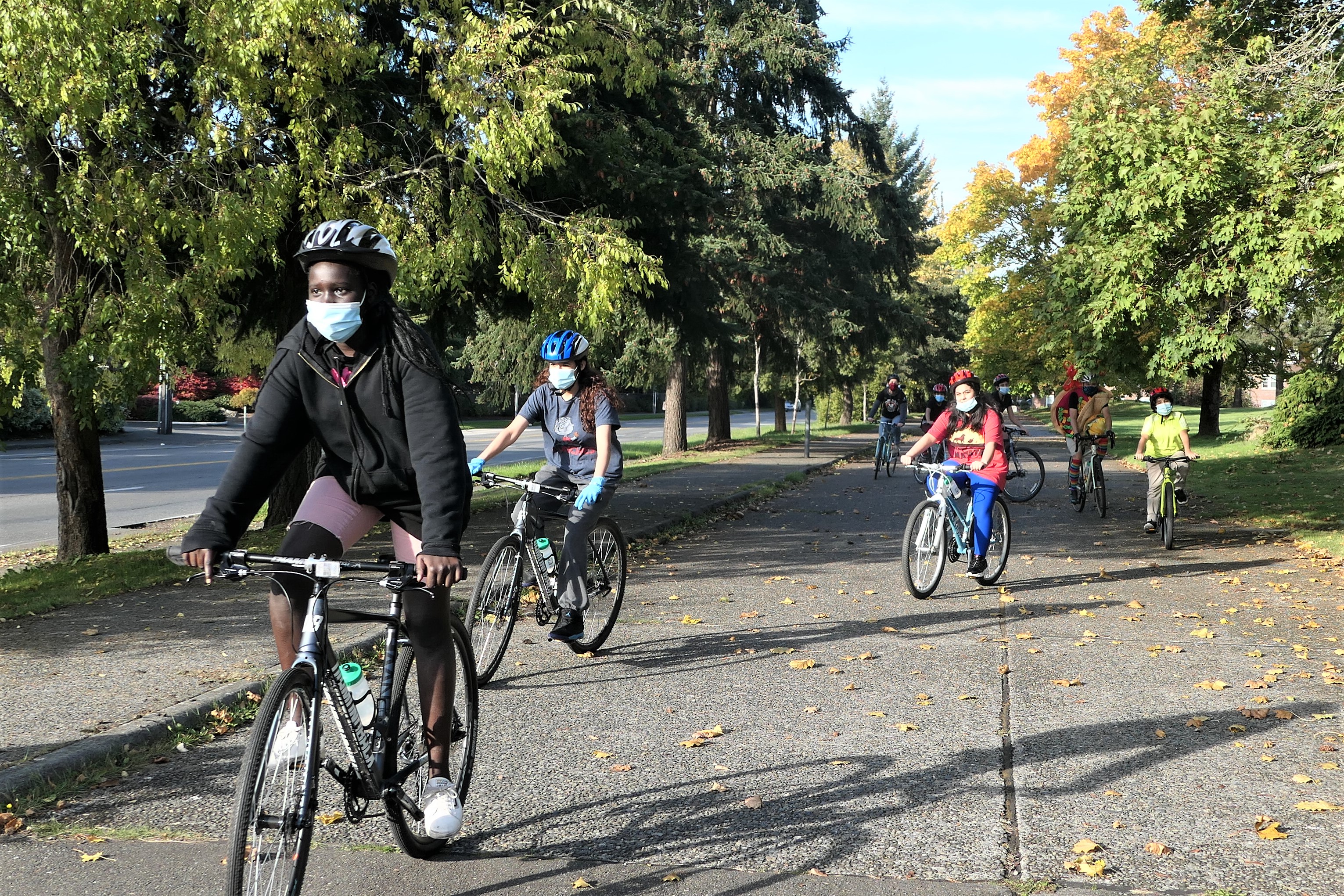 Re-launching MTP took months of planning, as well as many financial donations from individuals and a $150,000 grant from the Rapha Foundation that enabled Cascade to re-hire staff members furloughed at the outset of the pandemic. MTP has been in the national spotlight in 2020 due to its efforts to serve youths of color, a focus that dovetails with the national fight for racial and social justice.

Coordinators Hope Grant, who oversees the Seattle sessions, and Josh Stowell, who oversees the Tacoma sessions, had to find new locations, devise COVID-19 safety protocols, and figure out logistics with support from Cascade's Education Department. In the past, MTP worked with schools that provided space for indoor classes and safe places to store bikes, helmets, and equipment.

“Now we have to bring the bikes, bring the gear, wear masks,” Grant said. “Everything is different and more challenging now, but we are figuring it out.” 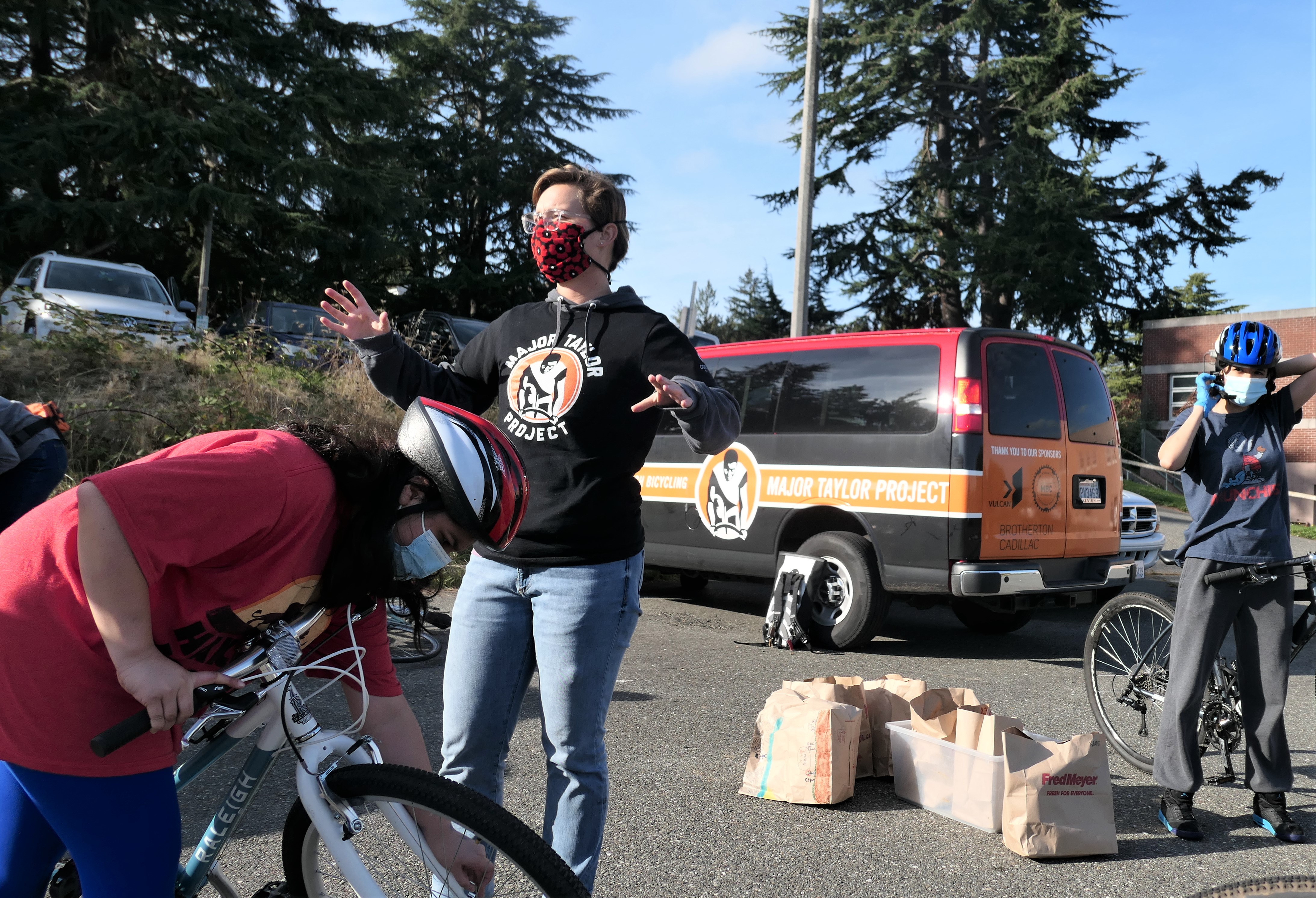 Grant gives some instructions prior to the ride.

In Seattle, MTP is meeting at Teen Hubs operated by the city Parks and Recreation department. In Tacoma, sessions are being held at central locations near schools.

Korver, who also leads Cascade’s Learn to Ride classes, commended Grant and Stowell for their hard work resuming MTP rides. “The kids are all saying how happy they are to get outside again because they are spending so much time indoors,” she said.

“Kids need some outside activity because they are doing a lot of virtual schooling these days,” Grant added.

In addition to Magnuson Park, the MTP locations in Seattle include the Teen Hub at South Lake High School in Rainier Beach, and Cascade Middle School in White Center. 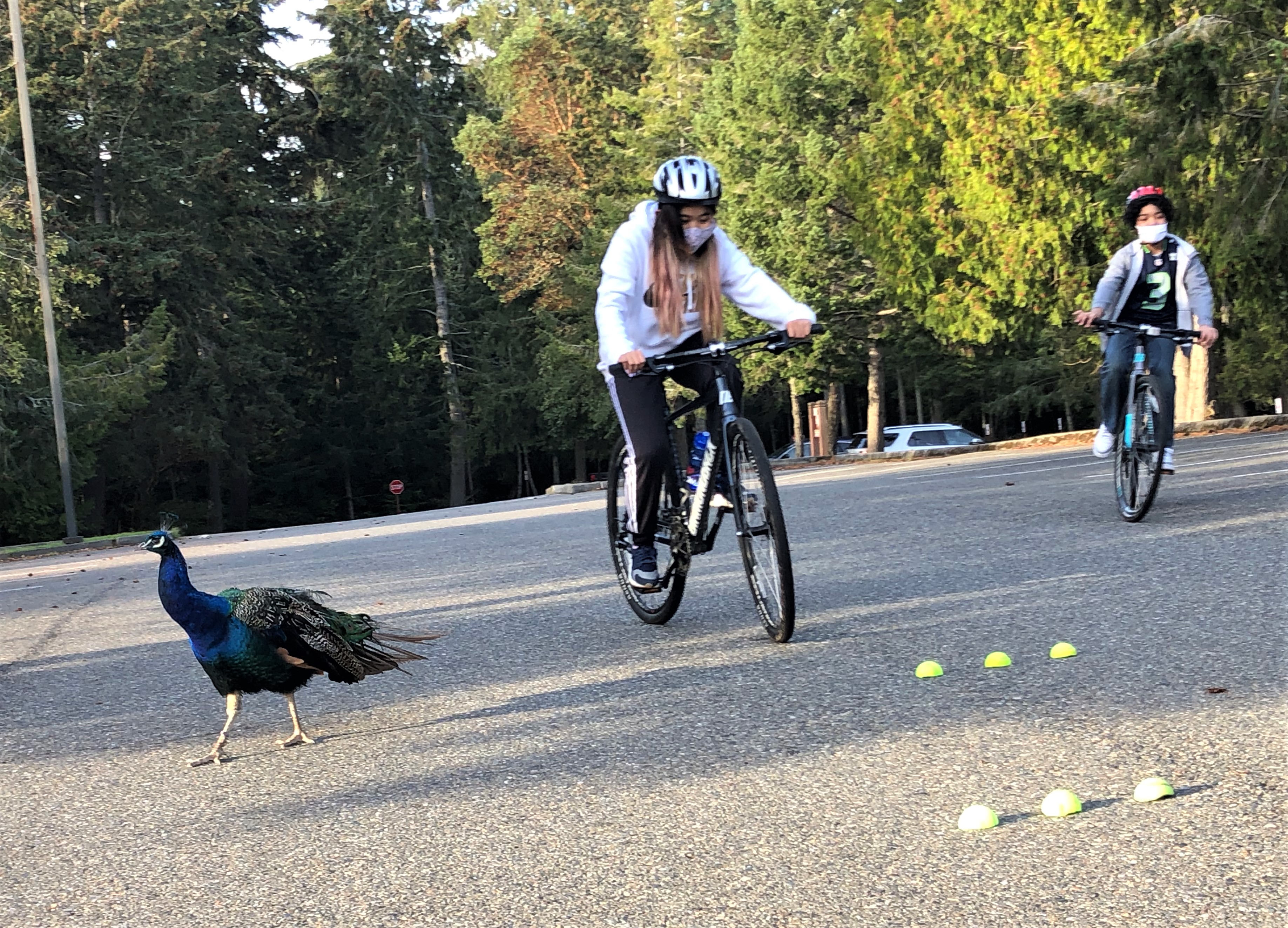 Rise of the Phoenix? An escaped peacock ran into a session Stowell was leading in Tacoma recently, providing some extra excitement--and perhaps a good omen.

During the Magnuson Park session, Korver and Grant helped the kids practice braking, stopping, turning, and passing. Participants ranged in age from 12 to 17.

After practicing in the park, Korver led the group uphill to the Burke-Gilman Trail for a ride to Matthews Beach. Grant took up the rear, riding “sweep” to ensure none of the kids fell back. Cascade volunteer Ben Truelove, who has donated time to MTP for several years, positioned himself in the middle.

The four-mile trip from Magnuson Park to the beach on Lake Washington and back was just one ride, but for the youths it was the start of a lifelong journey with bicycles.

“Resuming MTP is a huge morale boost in this year of incredible challenges. We hope to learn from this first round of clubs and resume in the spring with more participants and more locations,” said Education Director Rachel Osias. 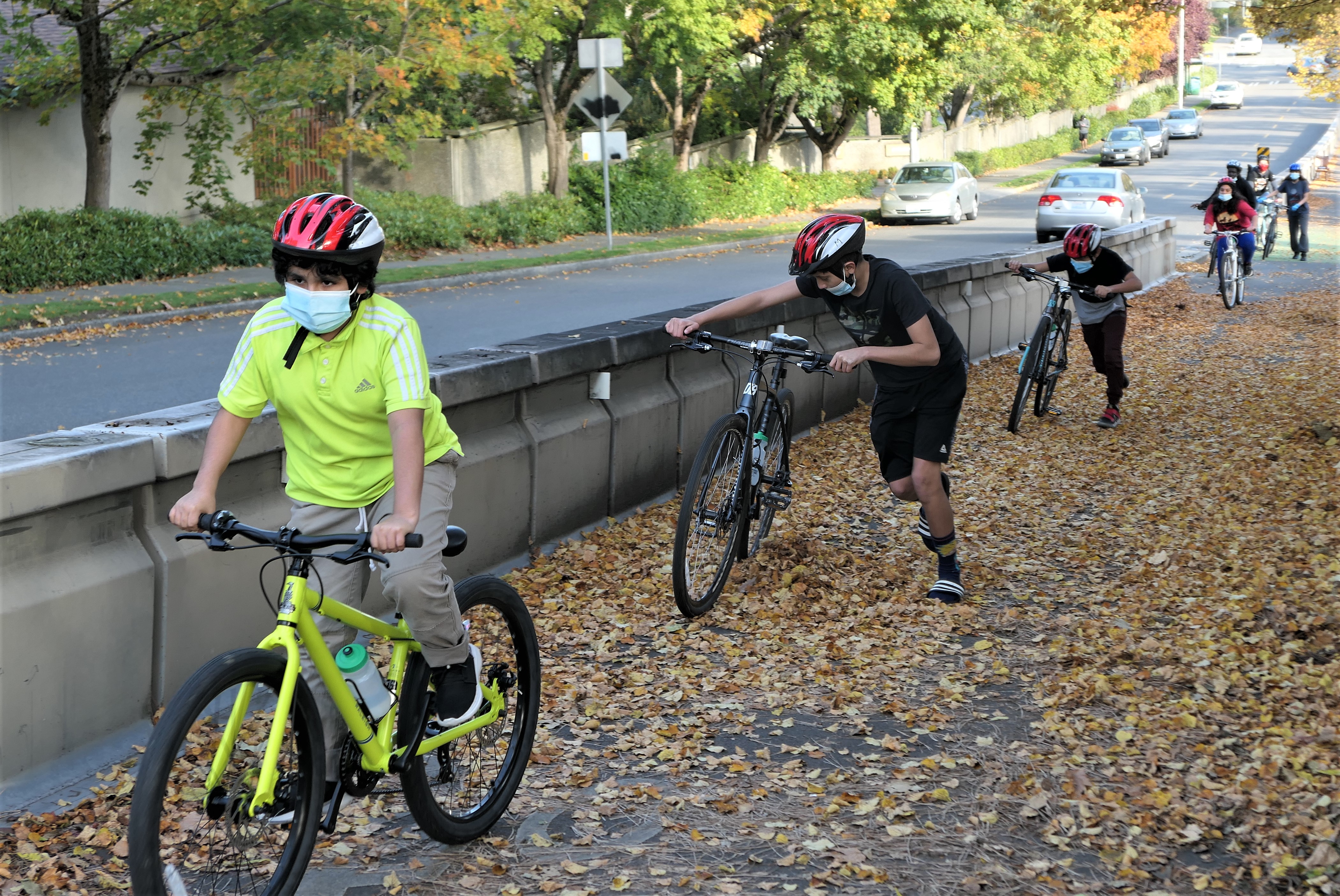 Sign up for the Virtual Ride for Major Taylor Project.

Learn more about MTP and donate. 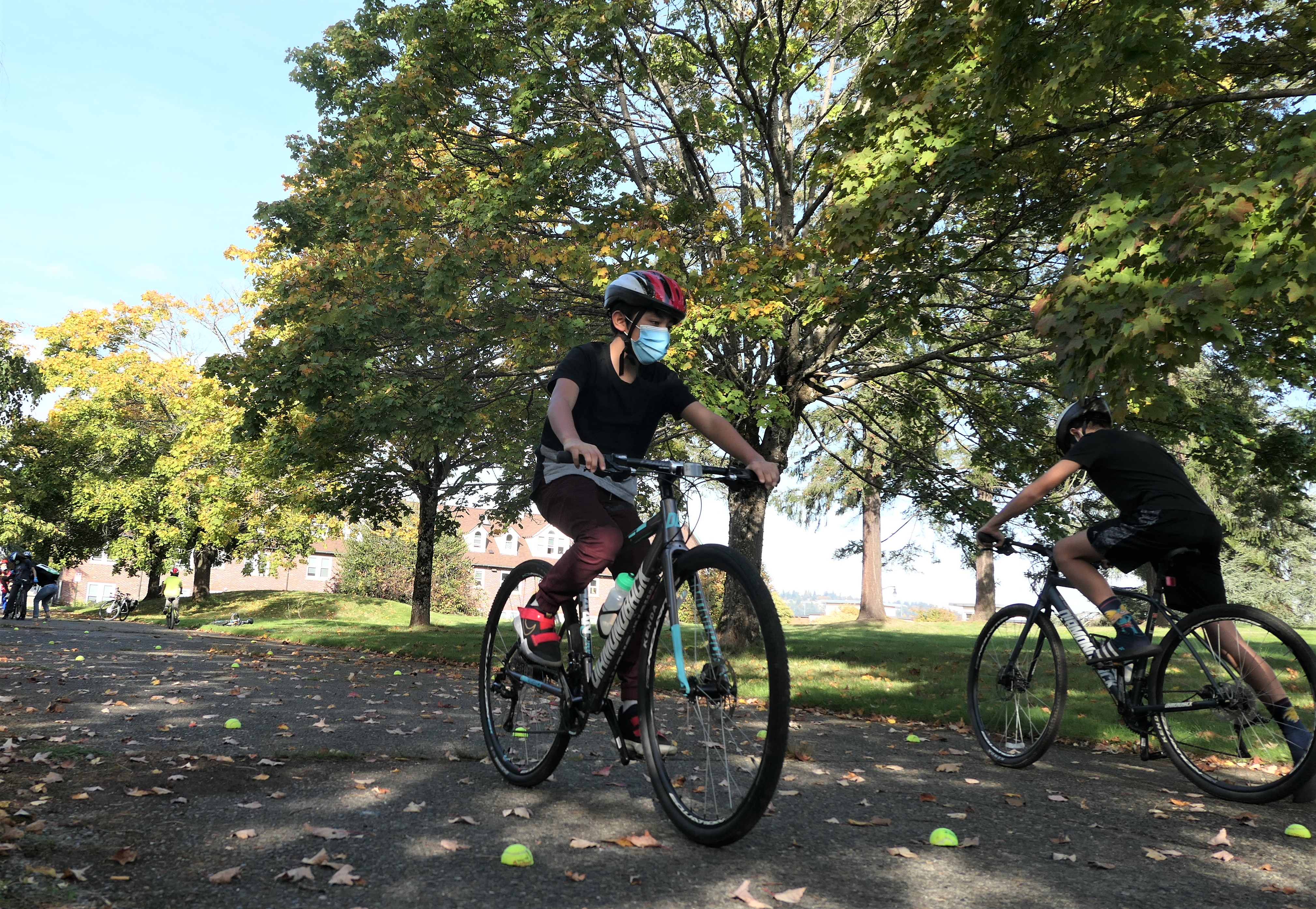 Practicing for a lifelong journey on bicycles.

Lessons on Mobility Privilege from a Week Without Driving