Construction is underway on the Eastrail, and some segments are already open for bikes. Join us for a summertime spin--and progress update--on the Puget Sound region’s most exciting trail project. 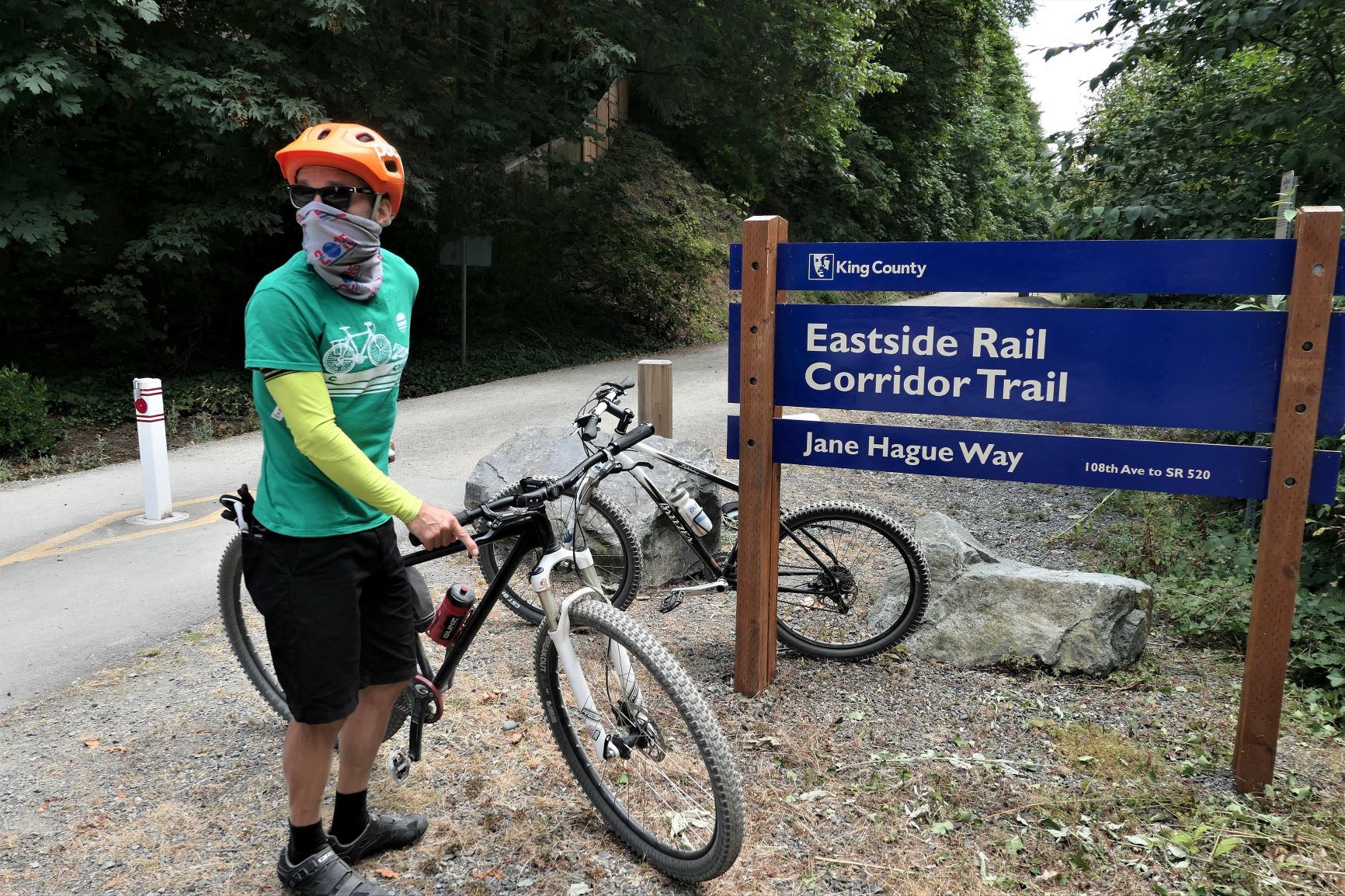 It was the perfect weekend bike mission: ride some of the completed sections of the Eastrail, the 42-mile trail that will one day connect five cities and two counties on the eastern side of Lake Washington--transforming bike travel in East King County and filling a key gap from Renton to Kirkland and beyond.

Beginning in Renton in the south, the Eastrail will pass through Bellevue, Kirkland and Woodinville and continue northward into rural Snohomish County, with a connector spur to Redmond, providing people with a safe, healthy and sustainable route for bicycling between the Eastside’s largest population centers, business districts and parks. It will also be a neighborhood connector that increases safe walking and biking to public transportation.

Completing the Eastrail has been an advocacy priority for Cascade since 2016, with major wins including state funding for refurbishing the iconic Wilburton Trestle, and help securing funding for the trail in the 2019 King County Parks Levy.

“We’ve been advocating for the Eastrail for years because of the game-changing connectivity, mobility, and recreation options it will bring to residents and visitors to King County’s Eastside. Connecting people to transit, or the chance of an active commute over the congested I-405, and connecting the residents of five of the Eastside’s largest, fastest growing, and diverse communities is a once-in-a-lifetime prospect,” said Vicky Clarke, Cascade’s policy director. “There’s momentum and will to complete this trail, and we’re looking forward to celebrating progress every step of the way.”

When complete, Eastrail will likely become the most heavily used trail on the Eastside, according to planners, with usage similar to the popular Sammamish River and Burke-Gilman trails. 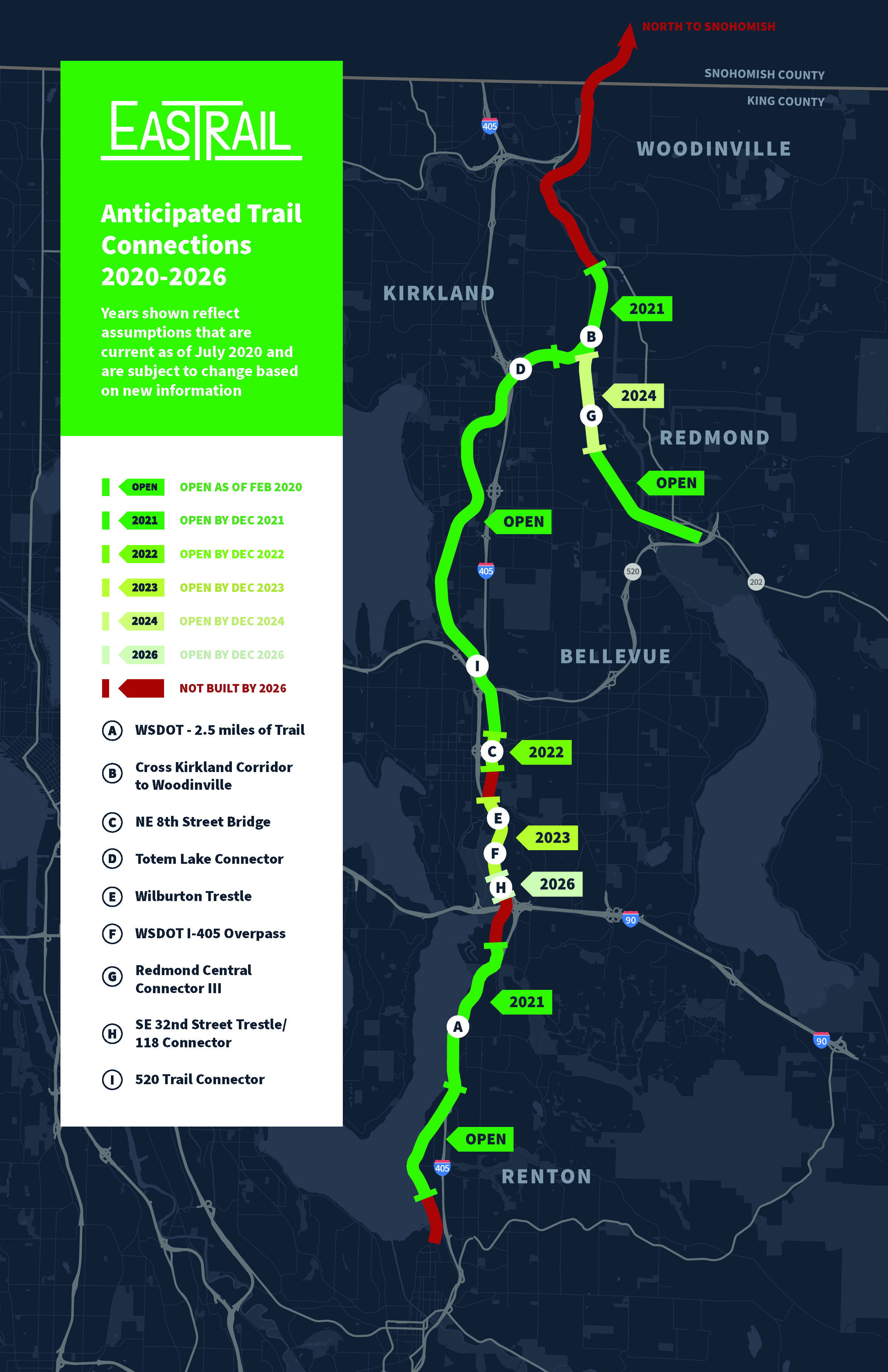 To learn more about the Eastrail’s past, present and future, I hopped on my bike on a recent weekend, riding from my home in Seattle across the SR-520 Bridge and I-90 Bridge bike trails to explore what will be one of the Puget Sound region’s crown jewels of biking, walking, and rolling.

While most of the trail’s route, which passes through a historic rail corridor, has yet to be completed, about 13 miles on the southern and northern ends of the Eastrail are open to bikes and pedestrians. These are the areas I decide to explore, starting with several miles of trail stretching from the Eastrail’s southern starting point at Gene Coulon Park in Renton. 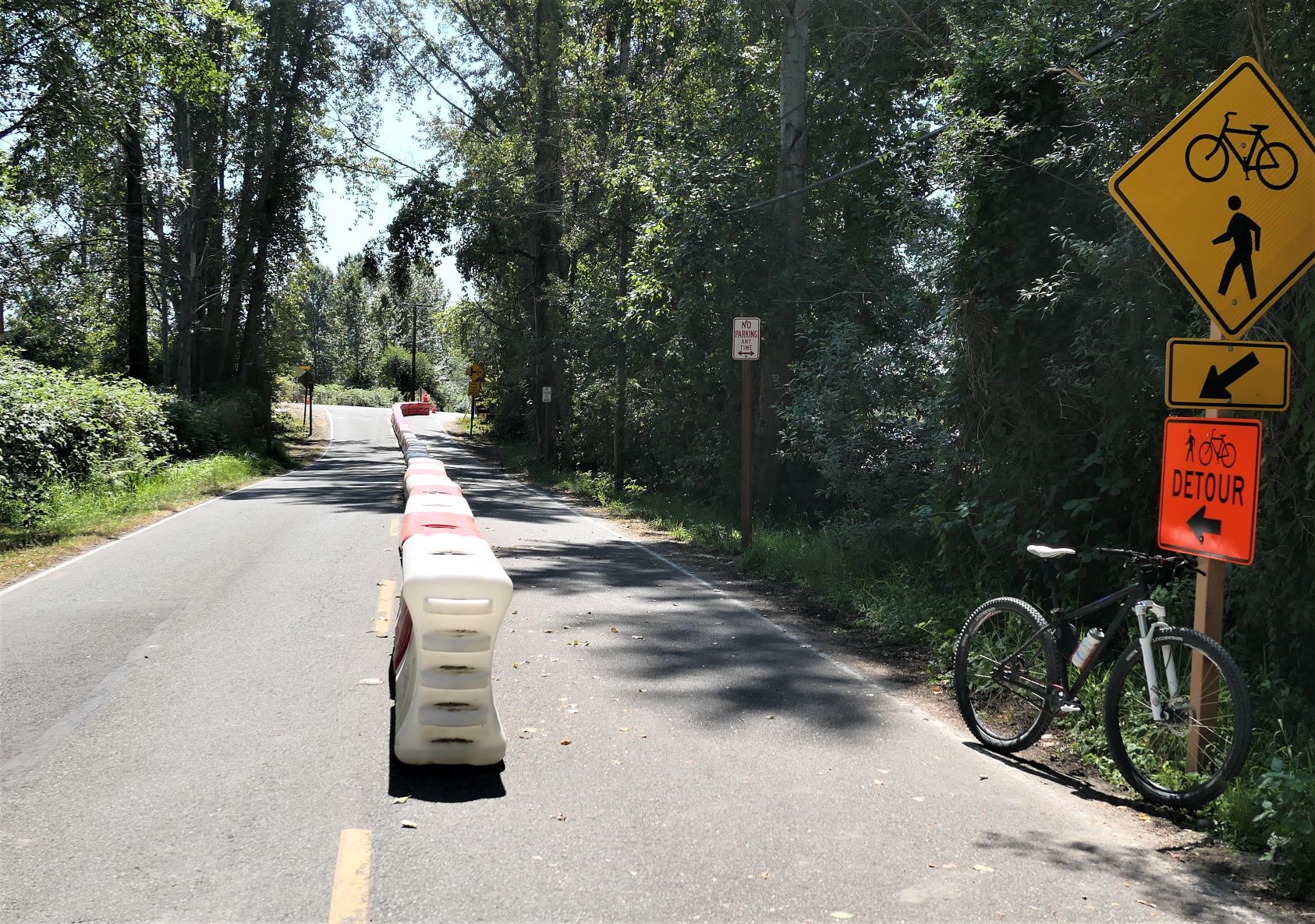 Crossing over from Seattle on the I-90 Trail, I head south and join the Lake Washington Loop in Bellevue, riding the bike lane on 118th and following a detour past a 2.5-mile trail segment that is under construction between the Coal Creek Parkway in Bellevue and Ripley Lane in Renton. This work is being funded by the Washington State Department of Transportation, in partnership with King County, as part of the I-405 widening project.

To provide space for different types of trail users, this new segment, currently scheduled to be completed by early 2021, will be 20 feet wide, with 12 feet of paved surface in the middle and six feet of gravel on one side, with two feet of gravel on the other. Lights are being installed at every road intersection for safety.

I pause to check out the work zone, stopping beside a sign that says Eastside Rail Corridor Trail--the Eastrail’s original name. There are no Eastrail signs yet, but they are in the works. It is here that I meet electric bike rider Jim Lovelace. 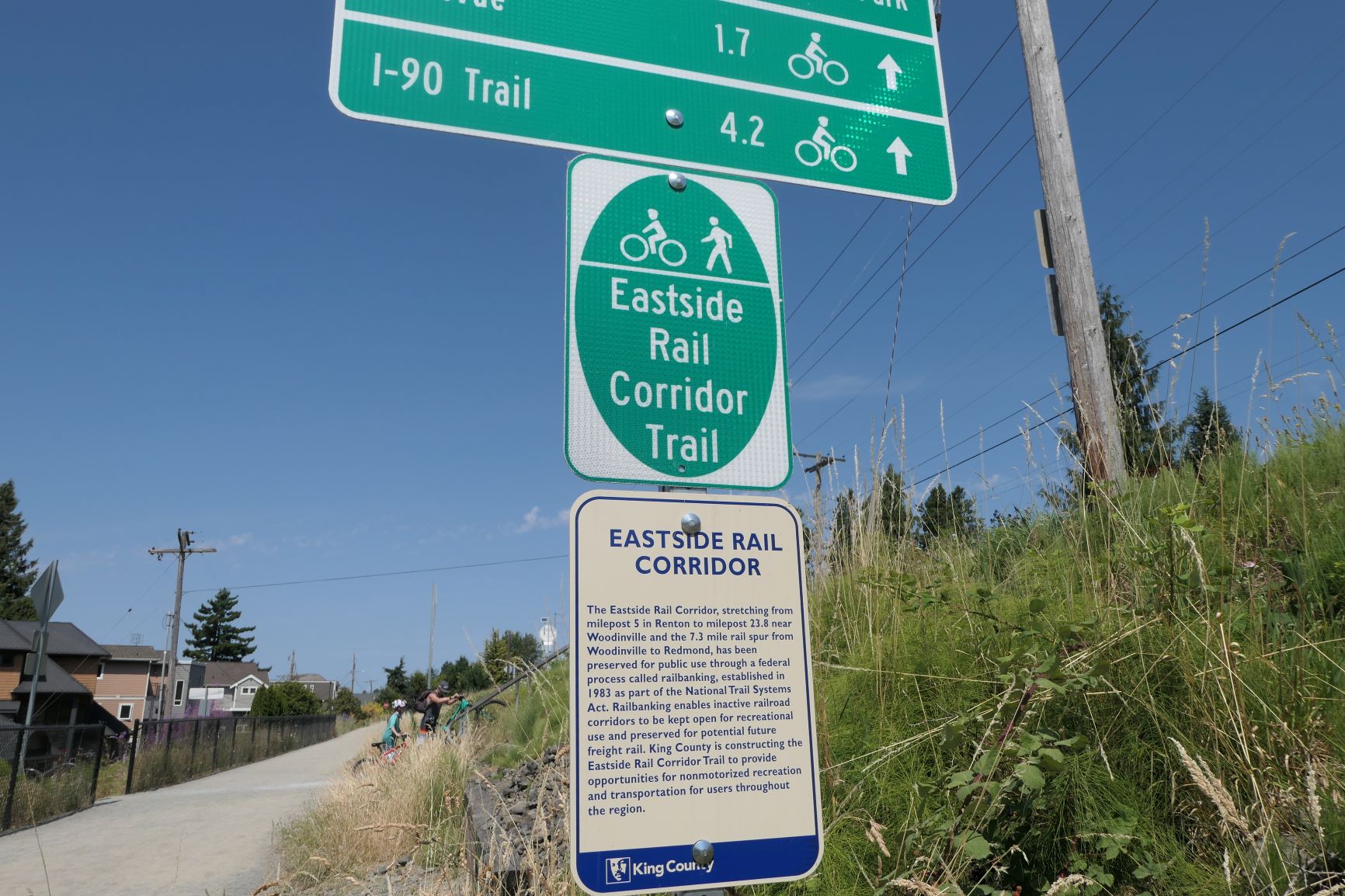 Lovelace is enjoying one of his first ebike rides on the Eastrail, and he is excited to share some big news. “Today is my last day of work. I’m retiring,” he says, standing astride his brand new Rad Power ebike. “This was my first purchase for retirement. I’m trying to get back in shape. And I got my wife one, too.”

Lovelace, who lives in Renton, had not heard of the Eastrail but he was excited when told of the 42 continuous miles and many trail linkages coming in future years. As a retiree pedaling for health and recreation, Lovelace is one of the demographics that will benefit from the Eastrail. 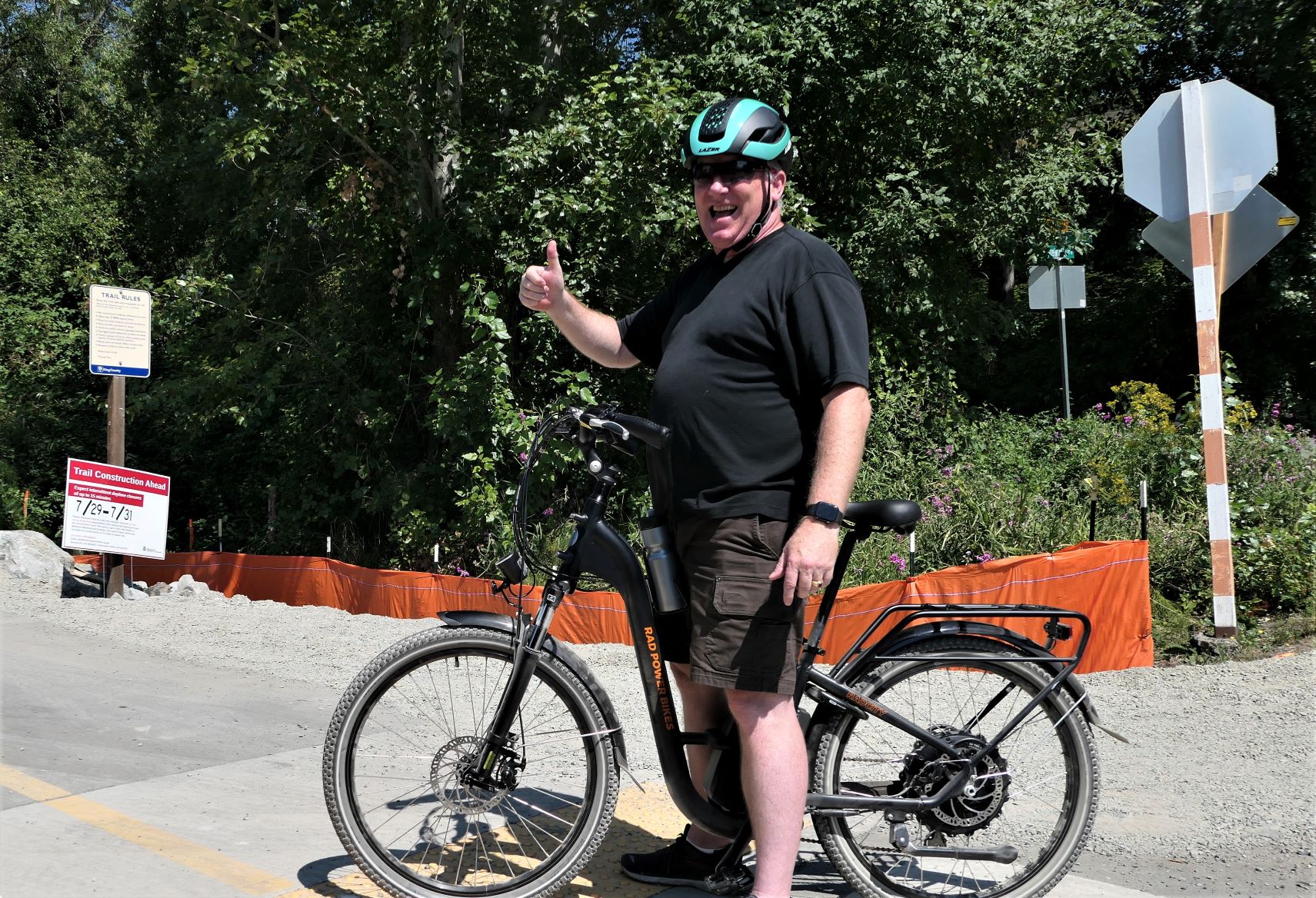 Other Eastrail beneficiaries will be people living in low-income neighborhoods that lack access to nearby trails and parks. Eastrail will pass within about a half-mile of 13 parks and 22 schools, providing a safe option for pedaling to class, to work, and or for family outings into nature. "We want Eastrail to be inclusive and welcoming to everyone, especially to communities of color and residents of lower-income neighborhoods that have historically been overlooked or not welcomed with open arms onto our regional trails," said Katherine Hollis, executive director of Eastrail Partners, a nonprofit that is uniting regional governments, businesses, nonprofits and community members to advance the trail's development.

Lovelace pedals away in the opposite direction and I continue southward on the crushed gravel trail, passing the massive Seattle Seahawks practice facility with its “12” banners, and heading to Kennydale Park, a lovely waterfront spot with swimming access, picnic tables, and playground facilities, and views of Mercer Island. It is a hot summer afternoon, and families splash in the water and picnic in the shade. 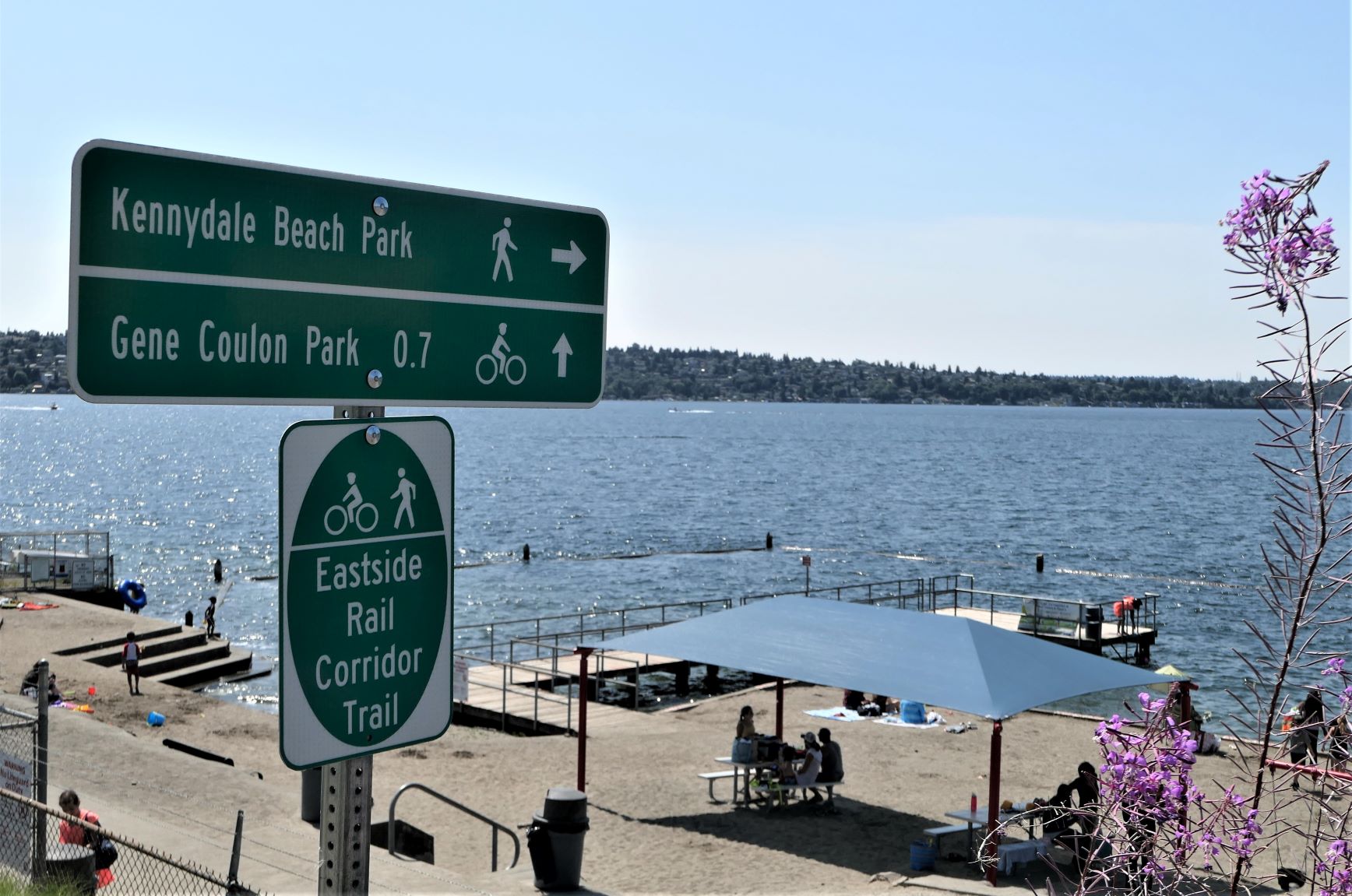 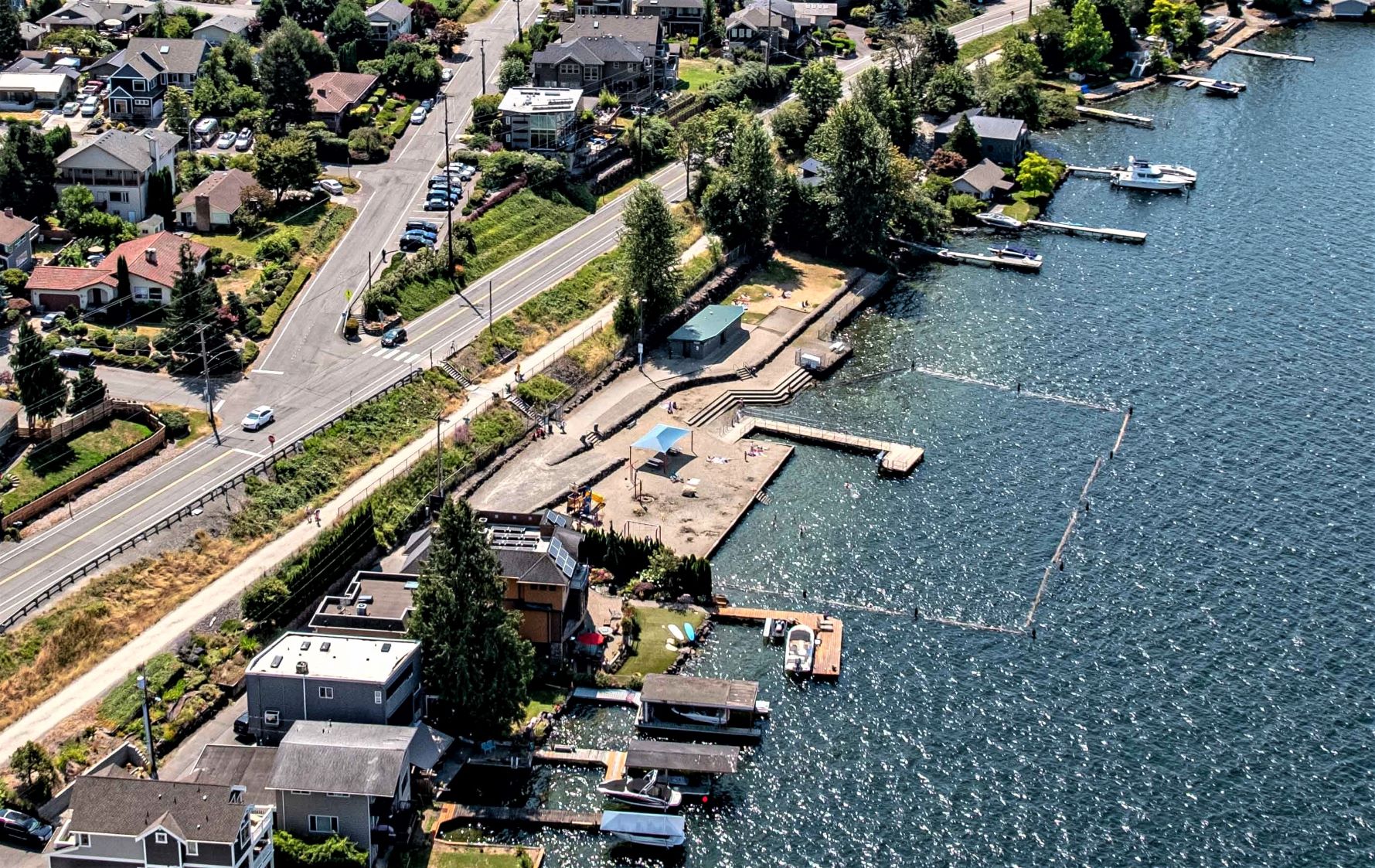 Pedaling onward and reaching the trail terminus at Gene Coulon Park, I turn around and again encounter Lovelace. He was headed home to Renton, but his ebike journey--and his adventures on the Eastrail--are just beginning. 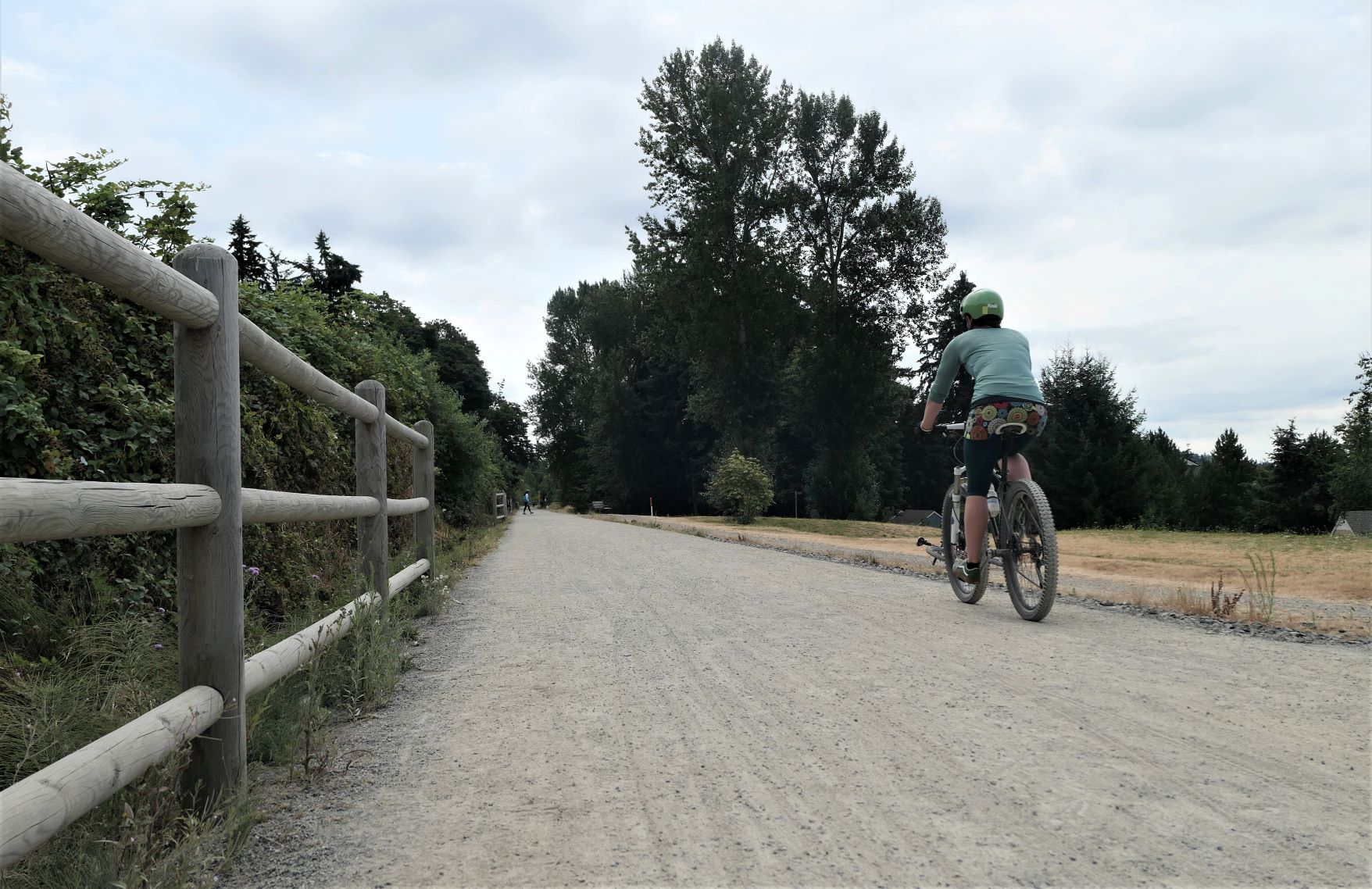 Accessing the trail from the SR-520 trail currently requires riding on the street for a short stretch, but King County plans to build a connector ramp between the two trails to ease access. The trail surface is crushed gravel, easy to ride on but a bit dusty. Riding northward, we pass families and seniors out for a Saturday morning spin, and we pause to check out the views of the Seattle skyline across Lake Washington. 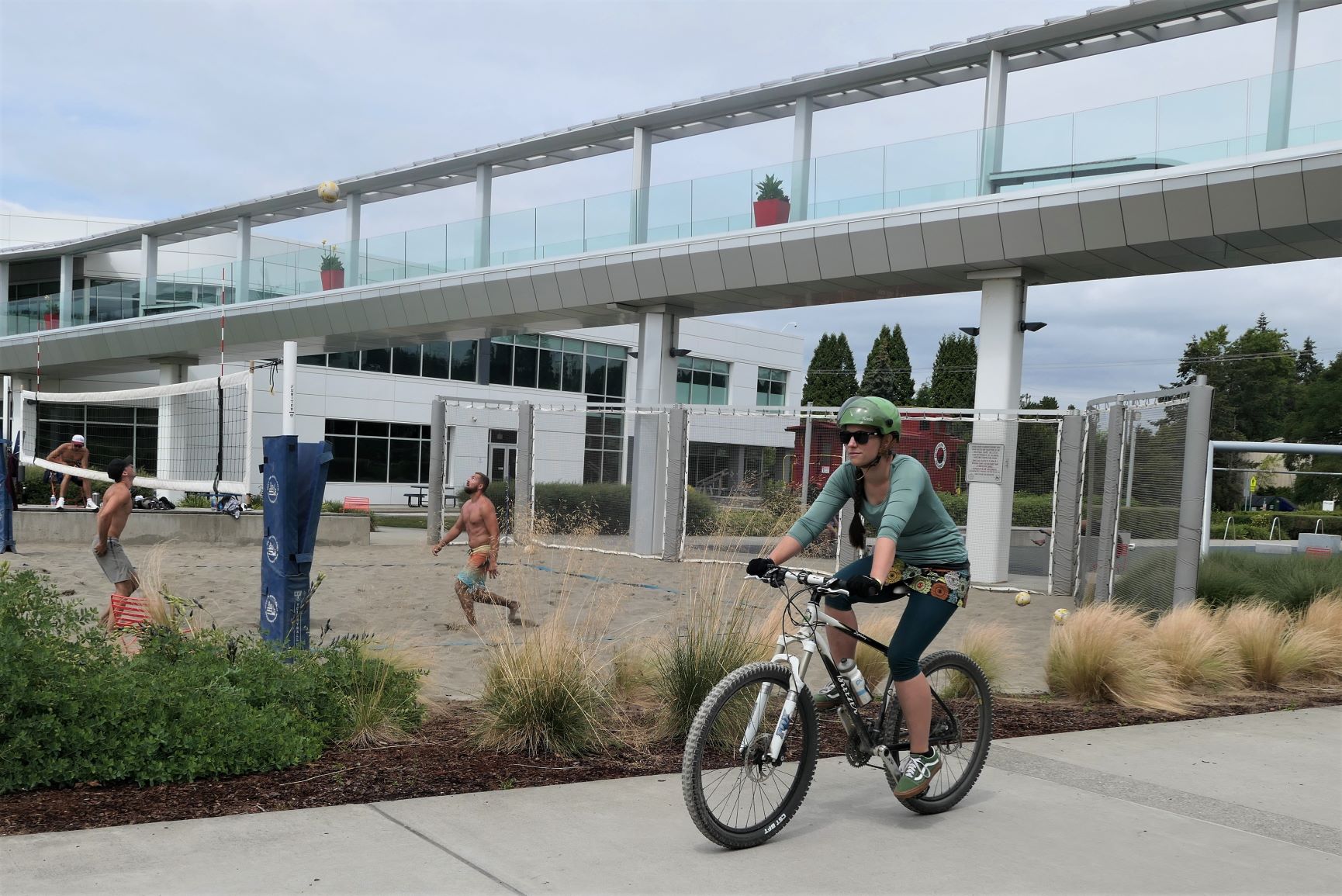 One of the highlights of the Eastrail here is Google’s Kirkland campus. Google spent $3 million to build this segment of trail through its campus, which features a pedestrian bridge overhead, modern architecture of concrete, metal and glass, a beach volleyball court, outdoor seating and wide grassy lawns. The trail here provides a vision of the Eastrail’s future as a place to recreate, relax, and connect with family and friends. We watch a two-on-two volleyball game before continuing northward.

Along with Google, Eastrail has wide support from the business community. Kaiser Permanente contributed $500,000 to Eastrail funding. REI cited the trail’s construction and its adjacent light rail and rapid ride transit options as a reason for the co-op’s decision to build a new corporate campus in Bellevue (although REI announced this week that it would sell the property and shift to remote working).

“Wildly popular,” is how King County Executive Dow Constantine has described Eastrail. “It will provide a lot of opportunity not just for recreation, but for commuting up and down the East Side,” Constantine told the magazine 425 Business.

Indeed, Eastrail offers tremendous potential for encouraging more commuting by bike and electric bike, and for reducing traffic gridlock by getting people out of cars. The Eastrail will pass by four new light rail stations and connect with rapid ride bus lines, providing trail users and commuters with options for multi-modal transport into Seattle and throughout the region.

For now, the Cross Kirkland Corridor comes to a jarring end at its intersection with Totem Lake Boulevard and Northeast 124th Street, requiring users to cross multiple busy streets to access the final “orphaned” segment. We turn around here, but in the future a bike and pedestrian bridge will provide a link for the trail to continue northward toward Woodinville. 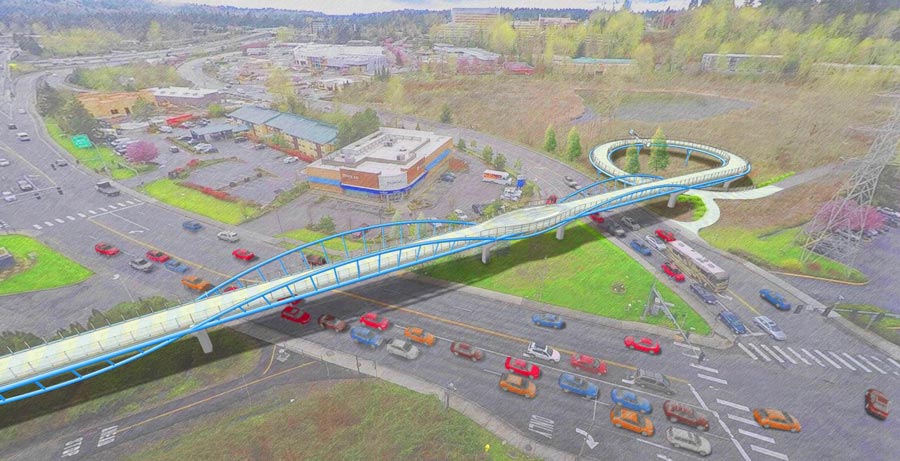 Called the Totem Lake Connector, this bridge will cross over eight lanes of car traffic. Kirkland officials say construction will take two years and could begin in 2021. On the northern side of this bridge, King County Parks, Woodinville and Kirkland are partnering to build a continuation of the gravel trail to Woodinville, including a connection along Willows Road to the Redmond Central Connector. A new crossing will be installed at 145th, near the Chateau Ste. Michelle Winery, allowing users to connect with the Sammamish River Trail and, if headed west, the Burke-Gilman Trail into Seattle.

Lots of major construction projects must be completed to connect all of the Eastrail segments, many of which are currently bisected by major thoroughfares. In addition to the Totem Lake Connector, there are four major crossings in the Bellevue area. The crossing of NE 8th in Bellevue will be made via a bike and pedestrian bridge that will provide direct walking and biking access to the new Wilburton East Link light rail station.

Further south, another bike and pedestrian bridge, which is fully funded by WSDOT, will cross I-405. That bridge will also feature a wildlife crossing. Both of those bridge projects are scheduled for completion in 2023, pending setbacks due to COVID-19. 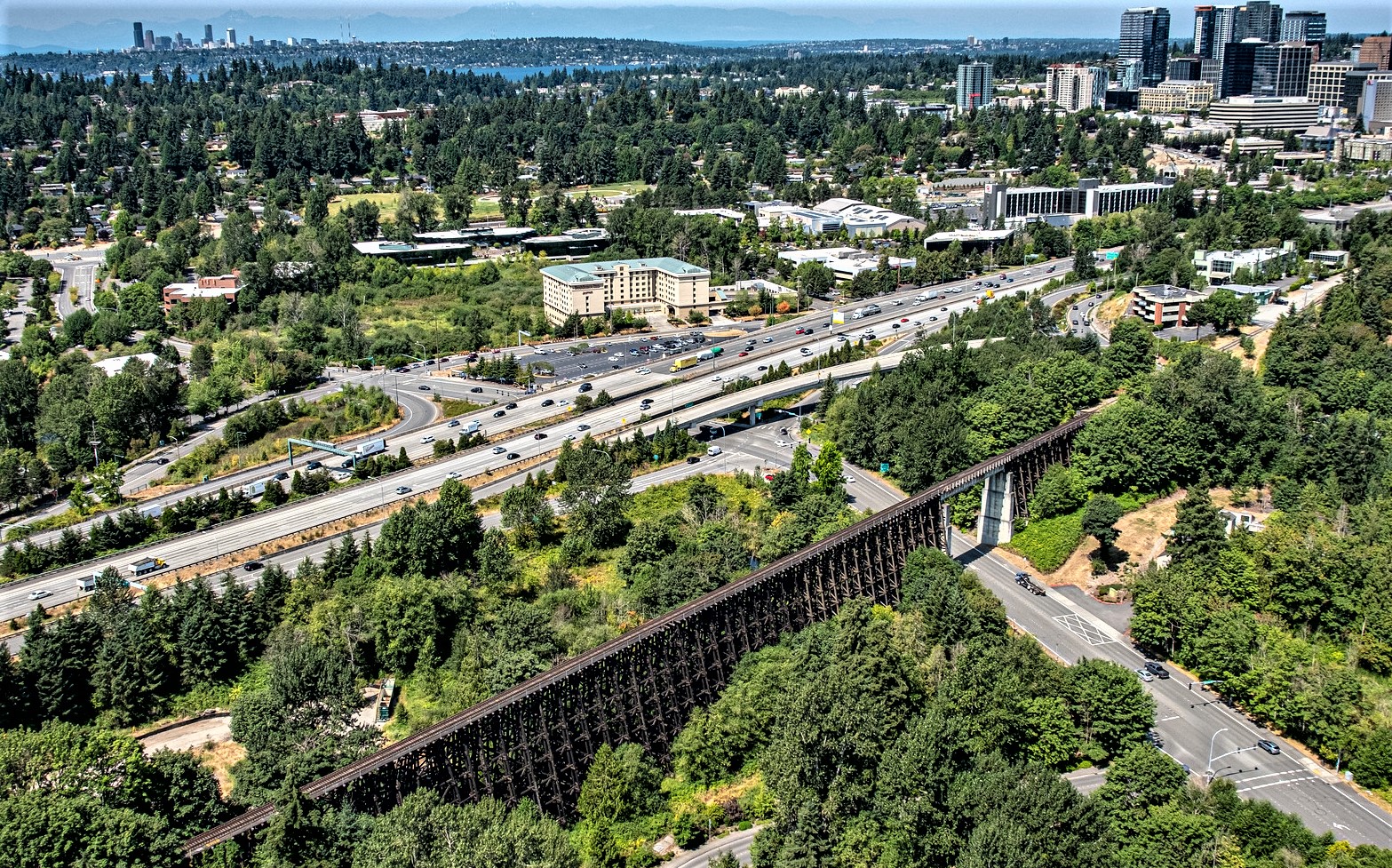 Another bridge project involves the Wilburton Trestle, which will be one of Eastrail’s most iconic features. More than 1,000 feet long, this historic railroad bridge will be retrofitted with a new surface that will provide trail users with a thrilling and visually stunning trip over Richard’s Creek, more than 100 feet above the ground. Built in 1904 by Northern Pacific Railway, Wilburton Trestle is a historic landmark and gem of the rail corridor, which was originally known as the Lake Washington Belt Line--a hub of commerce for Eastside freight rail service for more than 100 years.

One critical crossing remains underfunded and without a timeline for completion: the steel bridge that stretches over I-90 in Factoria. This bridge must be retrofitted to accommodate a trail.

The cost to develop the 26 miles of trail in Renton, Bellevue, Kirkland, Redmond and Woodinville are likely to total between $300 and $350 million, according to Curt Warber, King County’s Eastrail program manager.

Connecting the Region by Trail

In addition to transforming transportation on the Eastside, the Eastrail will be an important north-south trail spine that connects to many of the region’s most popular multi-use bike paths, providing a safe, healthy, non-polluting and low-carbon option for traveling and recreating throughout the region. On the south end in Renton, the Eastrail will allow users to connect to the Cedar River Trail, the Lake to Sound Trail and Green River Trail, providing users the opportunity for long off-road rides. 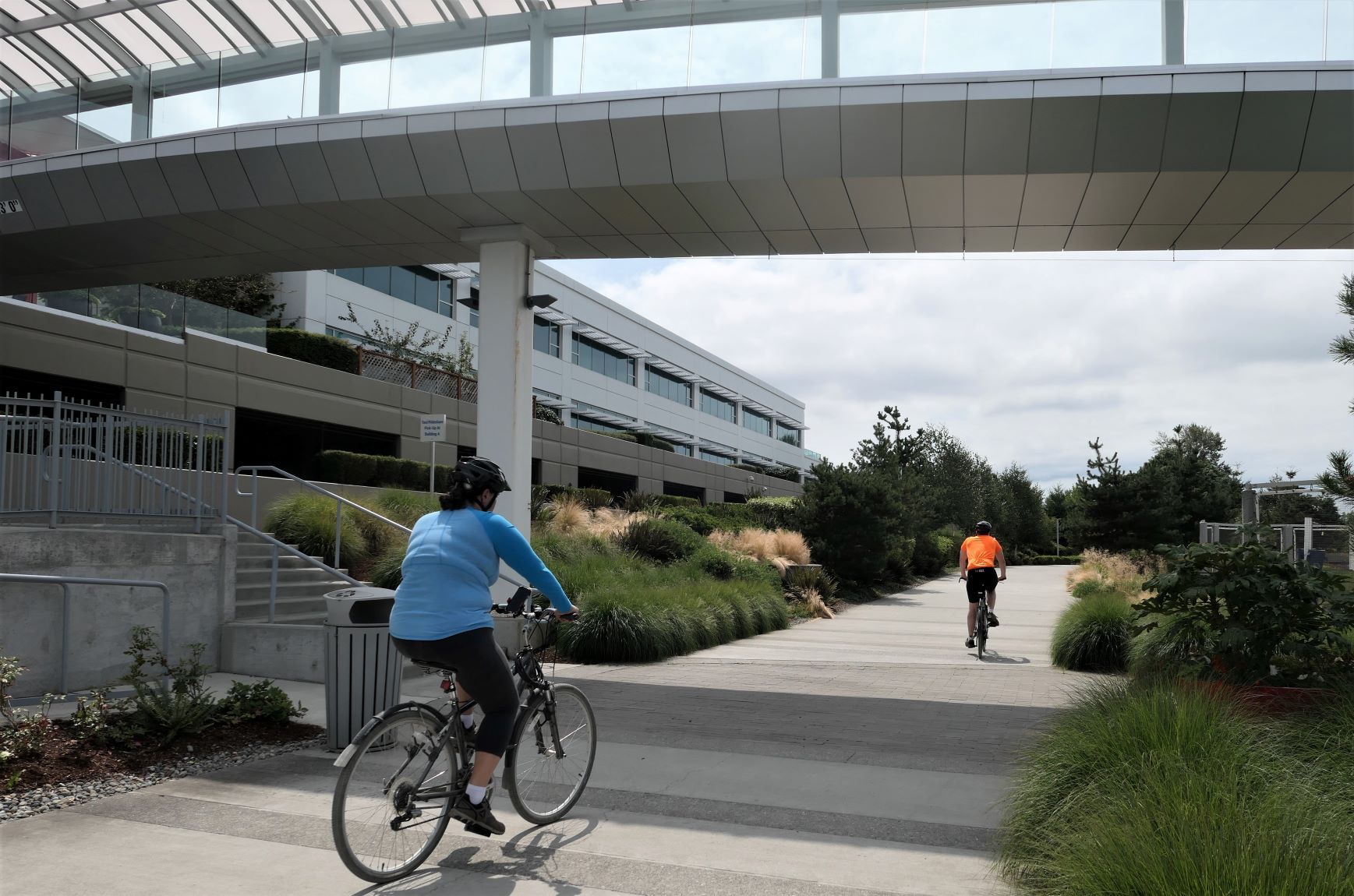 “Eastrail is one of the most ambitious and exciting bike and multi-use routes in the Seattle region, and its benefits to our economy, quality of life, sustainable growth, health, and happiness are almost impossible to quantify. Its value will be priceless,” said Clarke.

Pedaling home from our trip on the Cross Kirkland Connector, my wife and I were excited by the prospect of future rides that the Eastrail will enable, such as options to visit Woodinville for wine tastings. Like Lovelace, the retired ebike rider, and all people who bike, walk, and roll in the Seattle region, our journeys on the Eastrail have only just begun.