City of Seattle: Thanks for the Temporary Bike Lanes, Let’s Make Them Permanent | Cascade Bicycle Club
Skip to main content 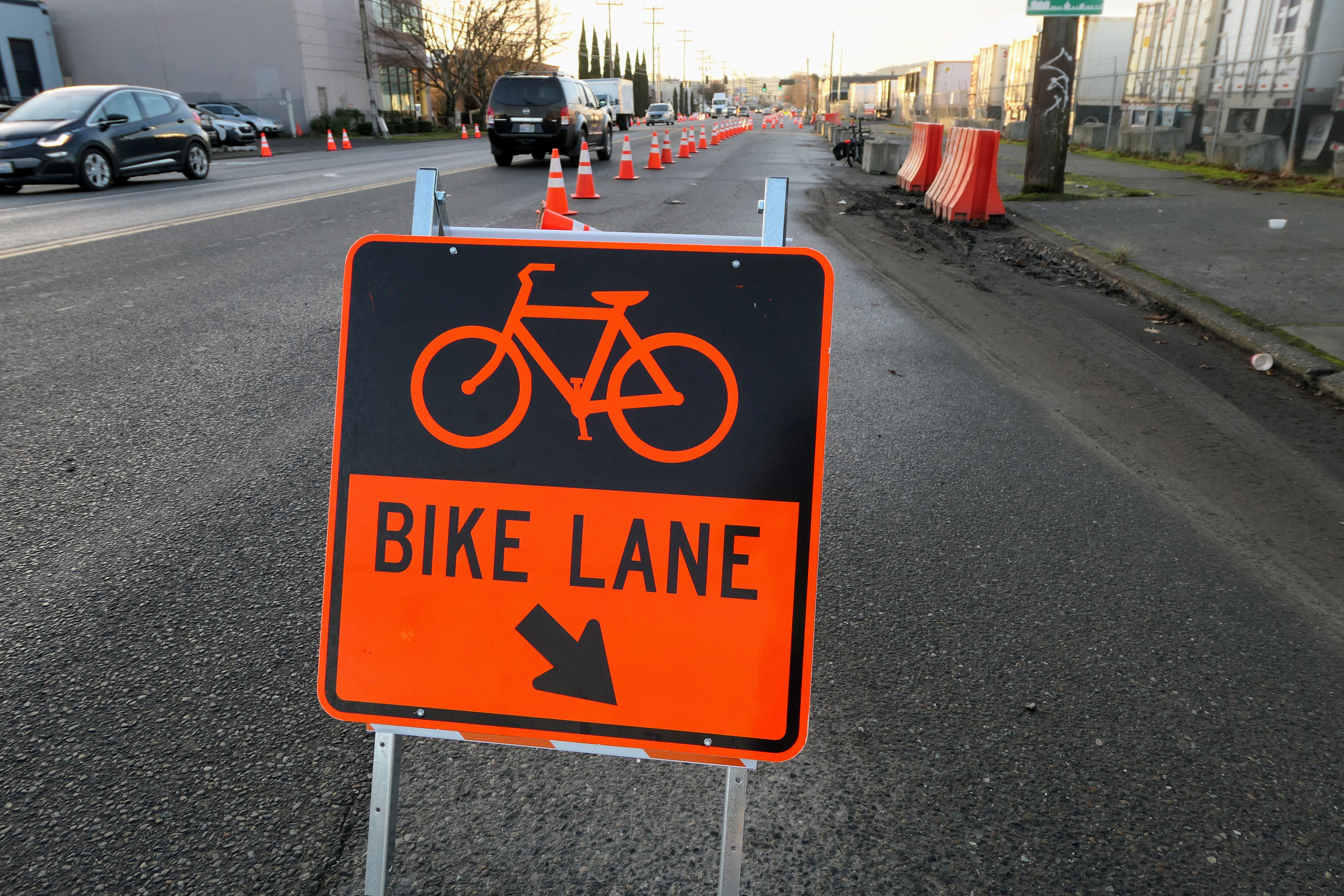 Cascade Bicycle Club applauds the fast action of the Seattle Department of Transportation to install temporary bike lanes on 1st Avenue South and West Marginal Way. Now we encourage the city to improve and maintain the temporary bike routes until permanent bike lanes can be put in place.

“The temporary bike lanes installed along 1st Avenue South and West Marginal Way will make this route safer and more comfortable for people on bikes during the bridge closure,” Lambert says. “Kudos to the mayor’s office, Seattle Transportation Director Greg Spotts, and SDOT crews for acting quickly to improve a challenging bike detour while this important bike connection is out of service.” 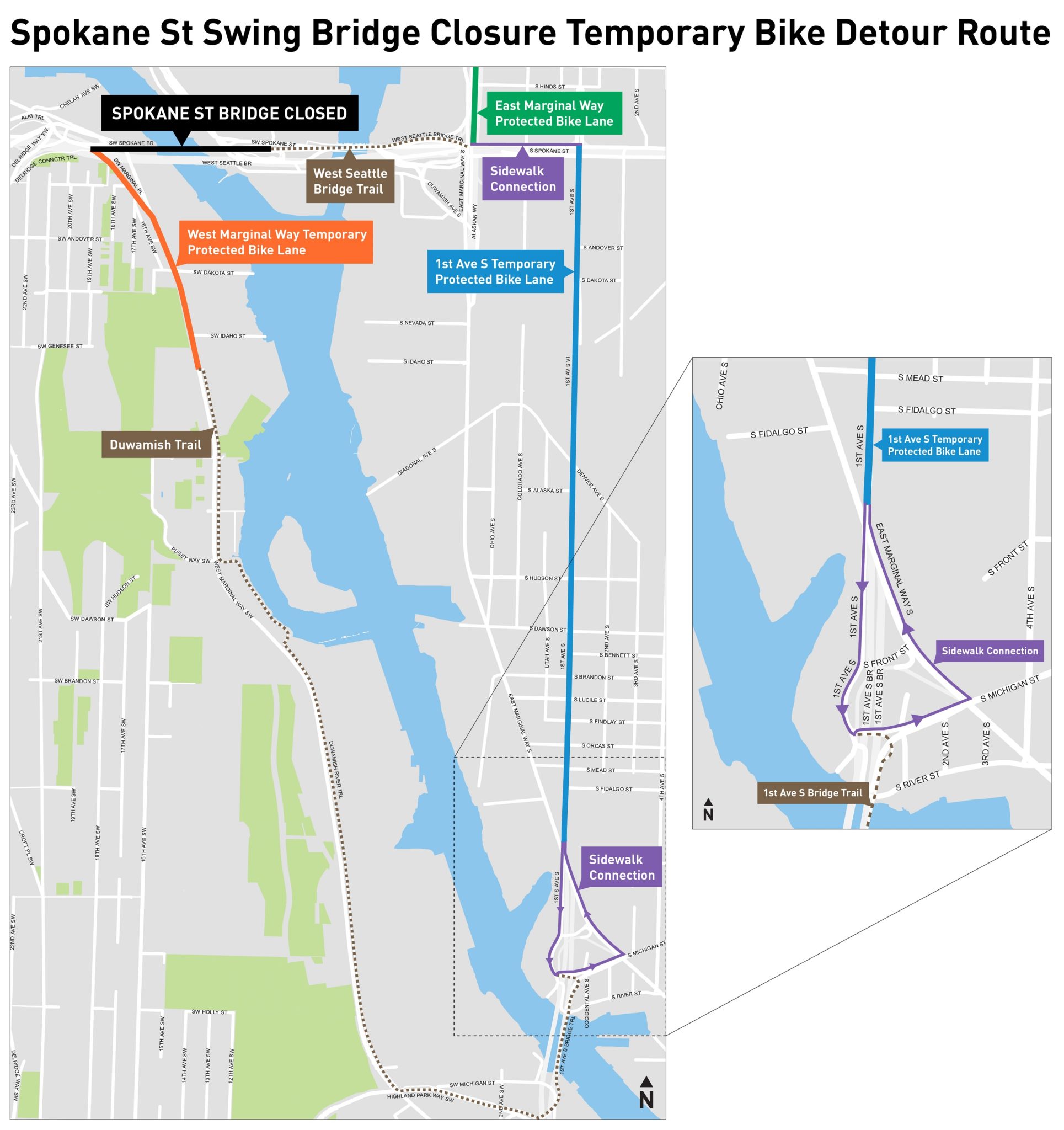 The Spokane Street Bridge, which is the primary bike connection between West Seattle to downtown, was closed for urgent repairs on December 27.

Cascade is now requesting that the temporary bike lanes, consisting of orange cones, be improved upon and maintained until permanent bike lanes in these two locations are installed. These two routes are part of Cascade's top 5 projects announced in 2022 for making Seattle safer for bicycling. SDOT currently plans to install a permanent bike lane on West Marginal Way in Spring 2023, and it is in the planning phase for a north-south bike route through SODO.

“The temporary bike lanes show that it’s possible to move quickly to make significant improvements for people on bikes,” says Rachel Schaeffer, Seattle policy manager. “But the orange cones should be replaced with more protective barriers that can remain in place while the city completes construction on permanent protected bike lanes.” 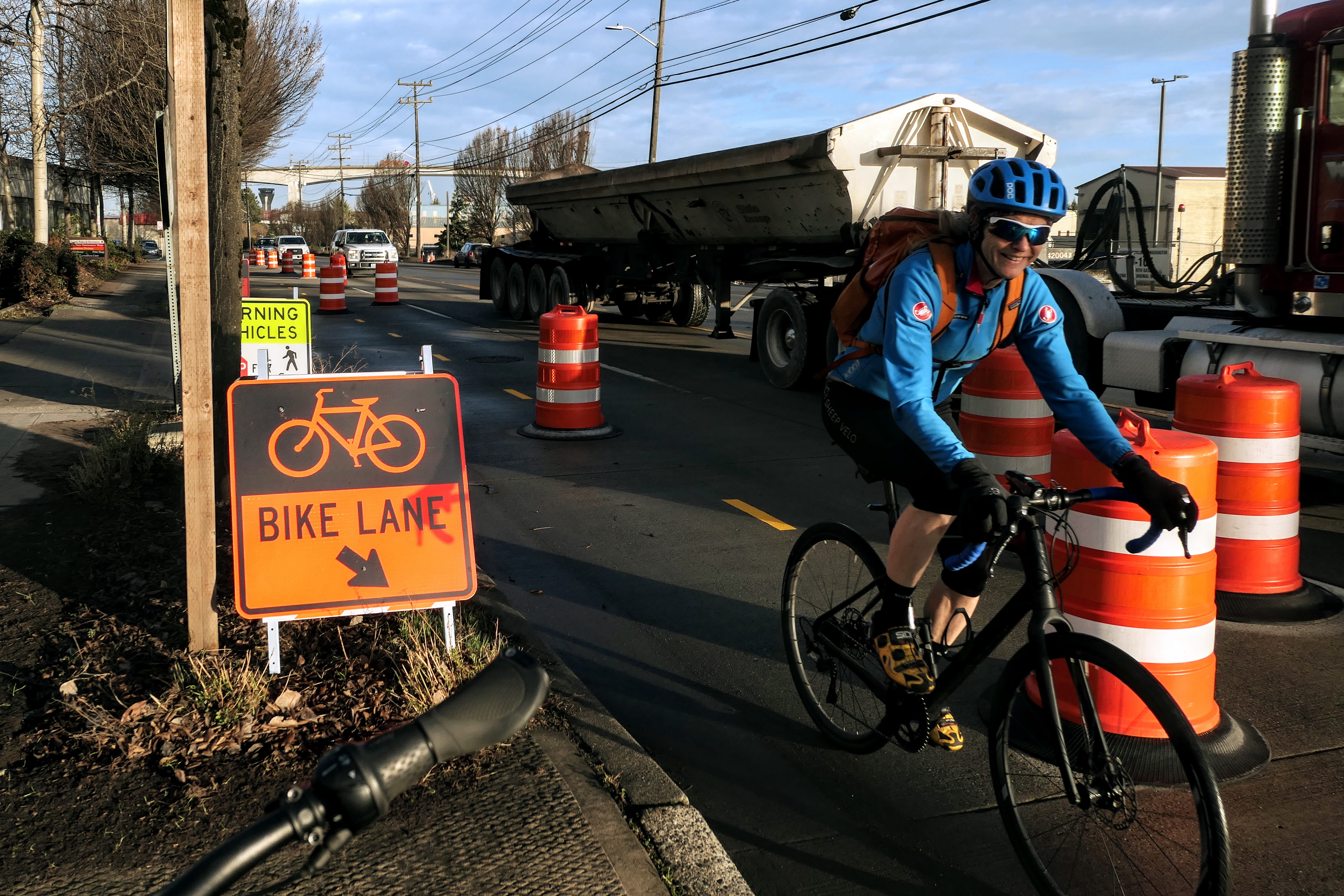 “These temporary bike lanes prove that opening street space to biking doesn’t mean drastic changes for motor vehicles,” Schaeffer says. “The cones along both parts of the detour transform wide, dangerous streets into ones where everybody can coexist and move at safe speeds, and this work took less than a week to complete.” 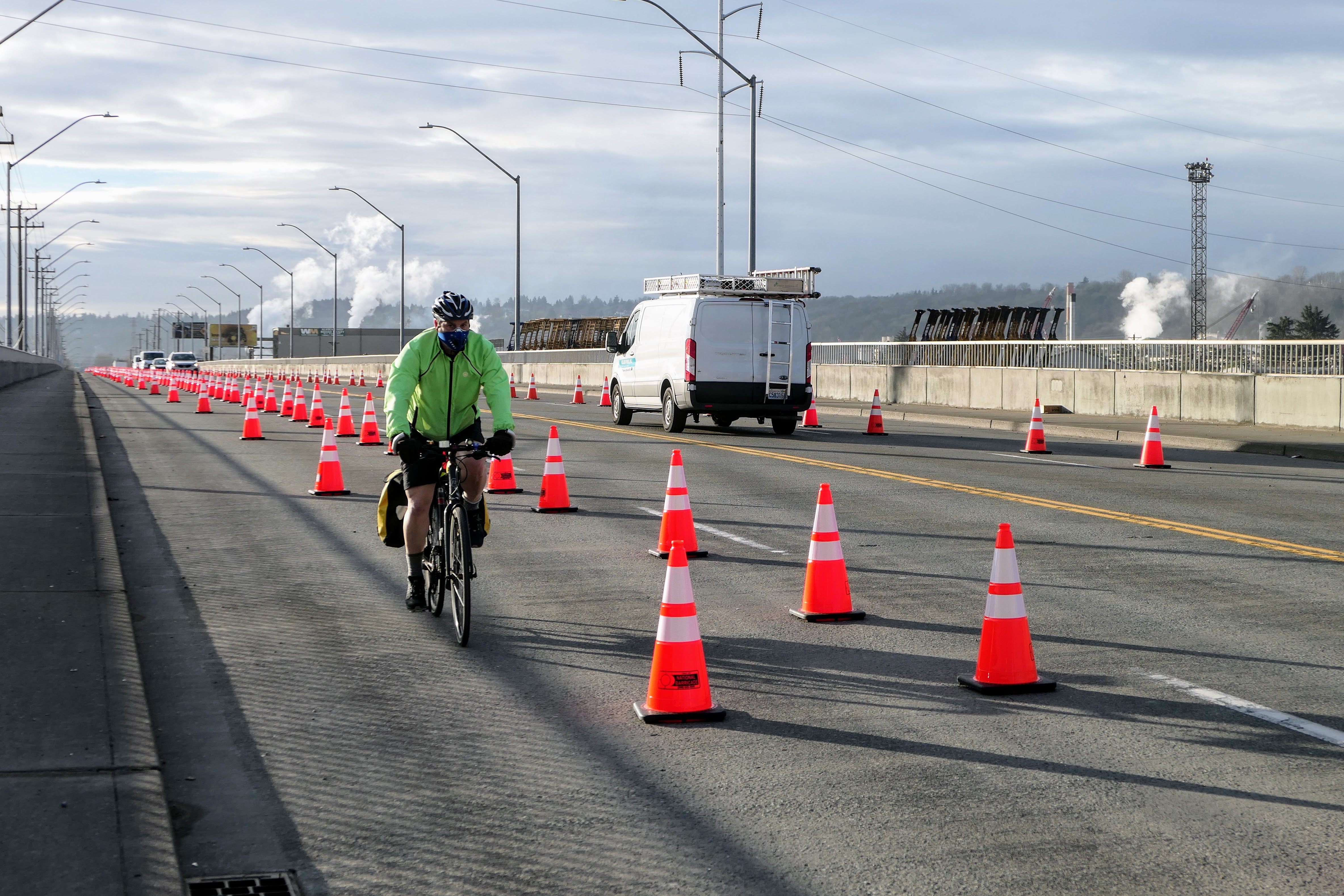 The temporary bike lanes include two of Cascades “Top Five Projects for Making Seattle Safer for Bicycling”: completion of the Georgetown to Downtown bike route, and a protected bike lane on West Marginal Way.

“The temporary bike lane along 1st Avenue South has created a safer direct route linking Georgetown, South Park, and neighborhoods south of Seattle to downtown, and it demonstrates that bicycling through SODO can be safe and easy,” Schaeffer says. That’s why Cascade would like SDOT to make 1st Avenue South a permanent part of the city’s bike network.

The temporary bike lane on West Marginal Way mimics the footprint of the protected bike lane that the city plans to build here, and it is a major improvement in safety. SDOT’s fast action to provide a bike route for people impacted by the closure of the Spokane Street Bridge is a lesson for the future. 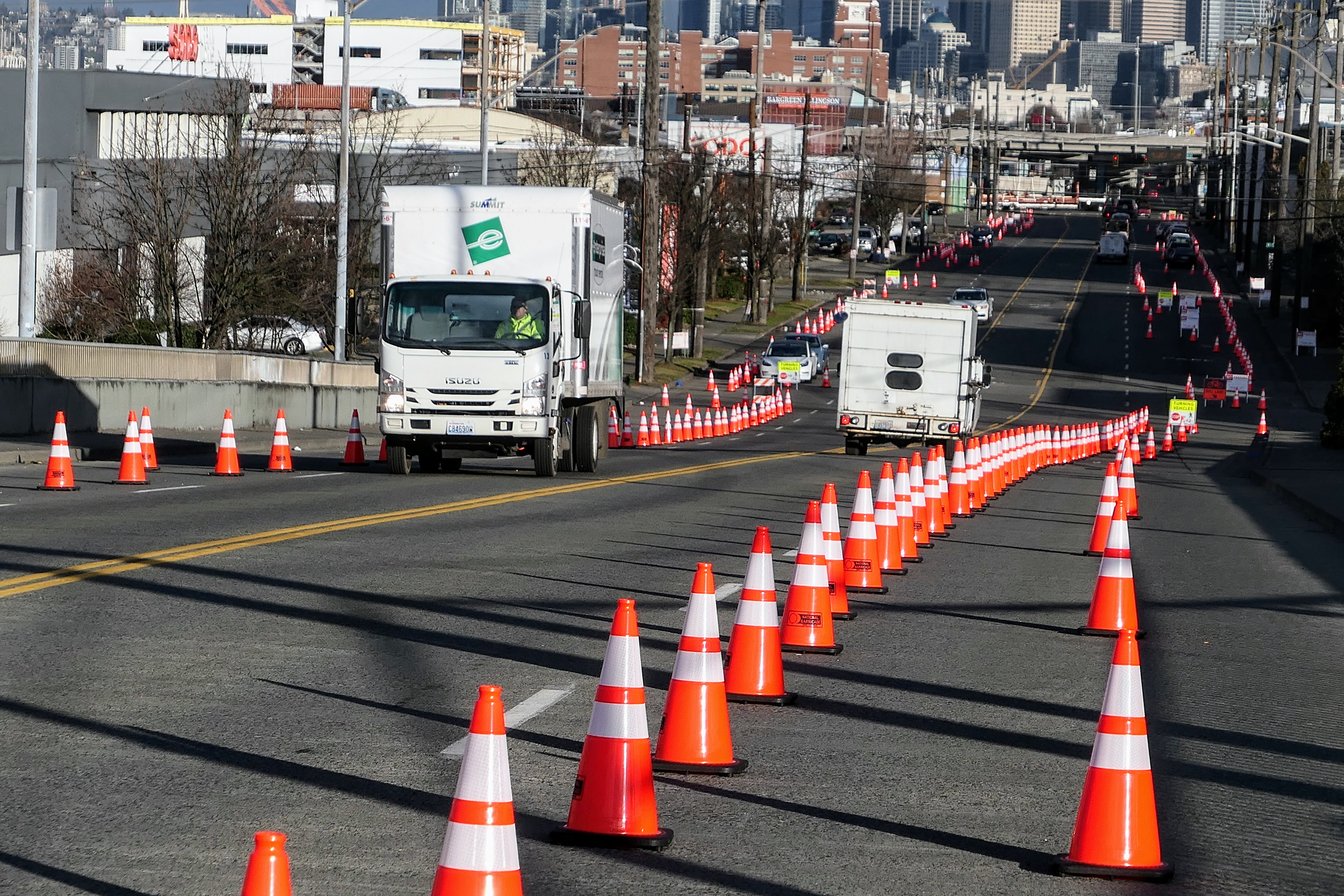 “SDOT should use this approach elsewhere to pilot inexpensive and timely street improvements so that more people are safe and comfortable biking and walking,” Schaeffer says.

SDOT is offering free credits to ride the West Seattle Water Taxi during the closure of the Spokane Street Swing Bridge, as well as bus rides for any route to and from West Seattle. Click here for more information from SDOT on the bridge closure and route adjustments.