Here are five high-priority bike projects we are asking the city to fast-track to increase safety, equity, and connectivity for all who bike within Seattle’s Bike Network.

SODO, like many areas of South Seattle, lacks even a single safe bike route. That’s why our top priority is seeing the city expedite the first protected, connected bike route through SODO, between Downtown and Georgetown. There’s an approved design which has some imperfections that need fixing. The plan is to complete the bike lane by 2024. That’s not fast enough.

The intersection of 4th Avenue South and Holgate Street, shown above, is an example of the dangerous conditions people walking and biking in SODO face. Each street is five or six lanes wide, making the intersection large and hard to cross. 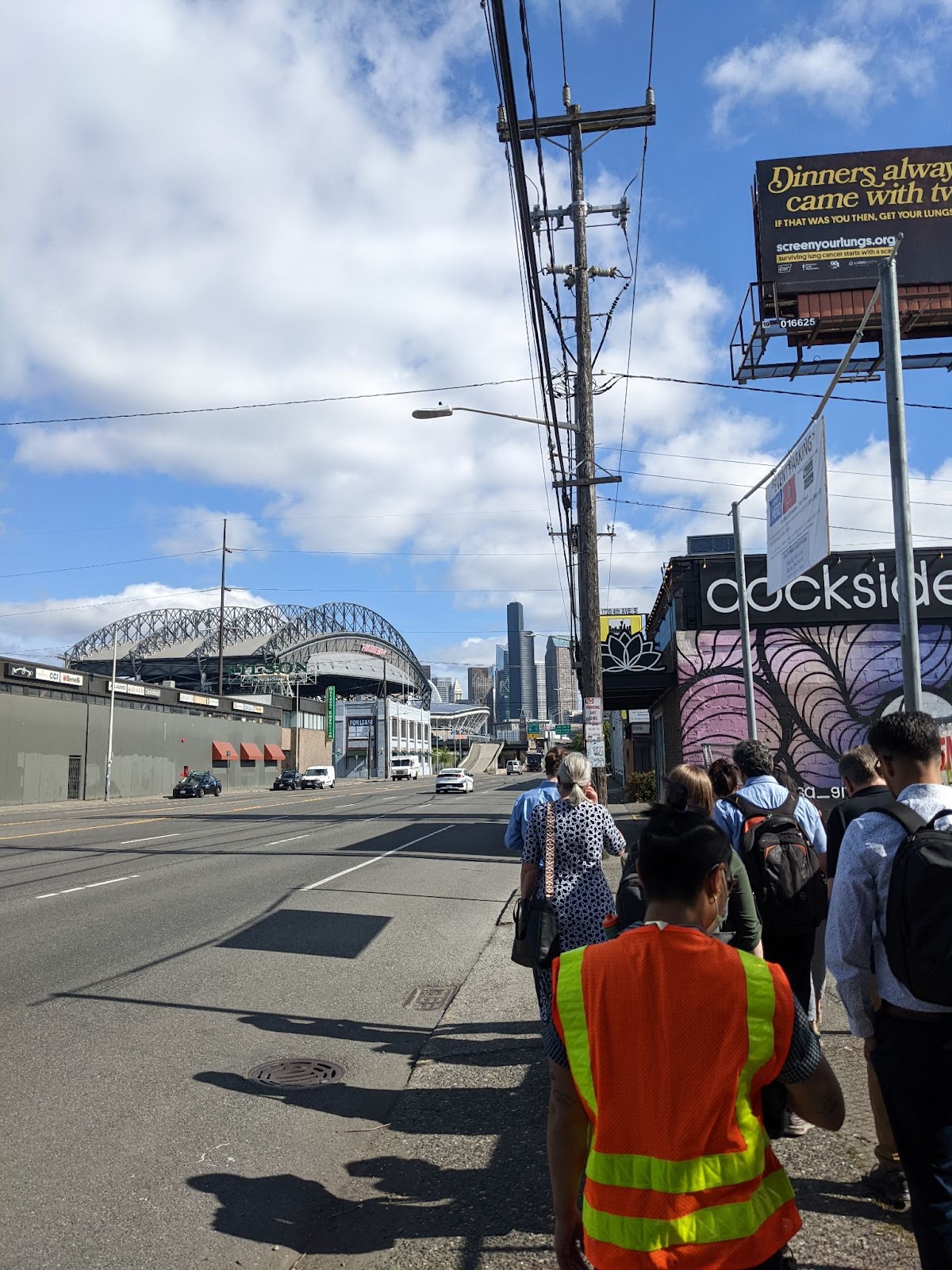 Walking north along 4th Ave South, it’s apparent how close SODO is to downtown, yet the streets feel like highways.

Right now, there is no safe and direct way to bike within and through Seattle’s SODO neighborhood. It’s a dangerous environment for people biking and walking--a fact underscored by the tragic reality that two people have lost their lives biking in the neighborhood this year, and six other people lost their lives simply trying to get around in the last three years. SODO is known (and dangerous) for its wide roads, fast-moving traffic, and lack of sidewalks. The lack of safe bike facilities continues to impact people who live, work, and play in South Seattle communities. It is inconvenient, impractical, and downright dangerous to connect by bike to the rest of Seattle. 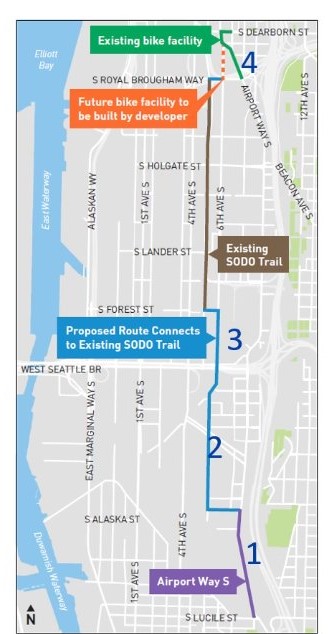 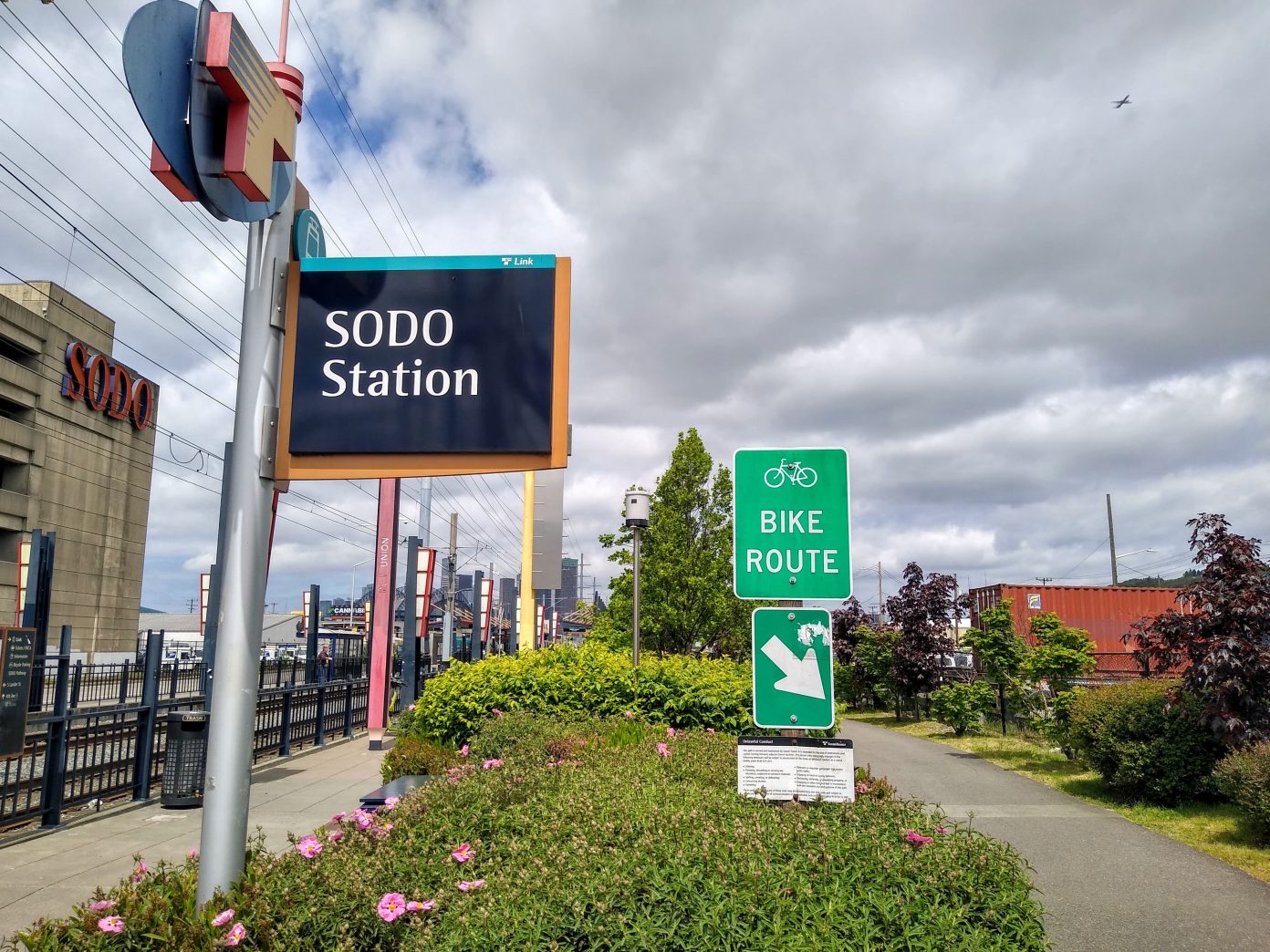 Biking between South Park and West Seattle, there’s currently a short but hair-raising gap in the bike route where the Duwamish trail ends along West Marginal Way, and where the West Seattle bridge trail starts. Filling the gap with an on-street protected bike lane is imminently do-able, but keeps getting postponed. This route matters. We’re making sure the city doesn’t let this project fall off the list. 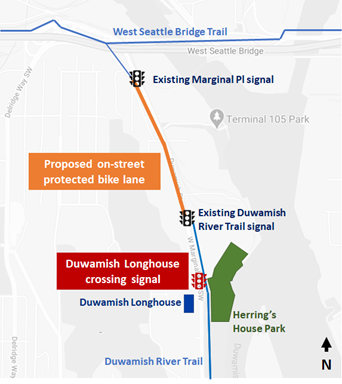 The photo above shows the planned on-street protected bike route along West Marginal Way to connect to the Duwamish Trail. The illustration below shows the proposed on-street improvements. 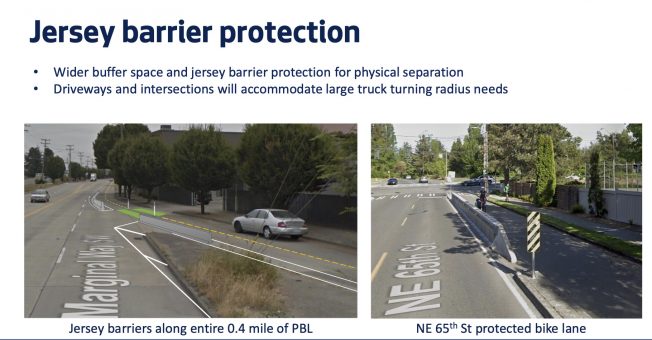 Seattle’s waterfront is being completely re-imagined. Yet the iconic waterfront trail won’t span the full length of Alaskan Way. For one mile, a two-way protected bike lane will have to do the heavy lifting of connecting the waterfront trail to Alki Beach and the Elliot Bay trail. The current design of the bike lane doesn’t hold its own weight. It skips across the street twice in five blocks–meaning it’s not safe, it’s not direct, and it’s confusing. That’s why we’re advocating that the city sharpen its pencils and return to the drawing board to create a better way to bike on the waterfront. More than 600 people have shared that sentiment with the city. You can still join them: add your voice for an Alaskan Way design that is safe, simple, and direct. 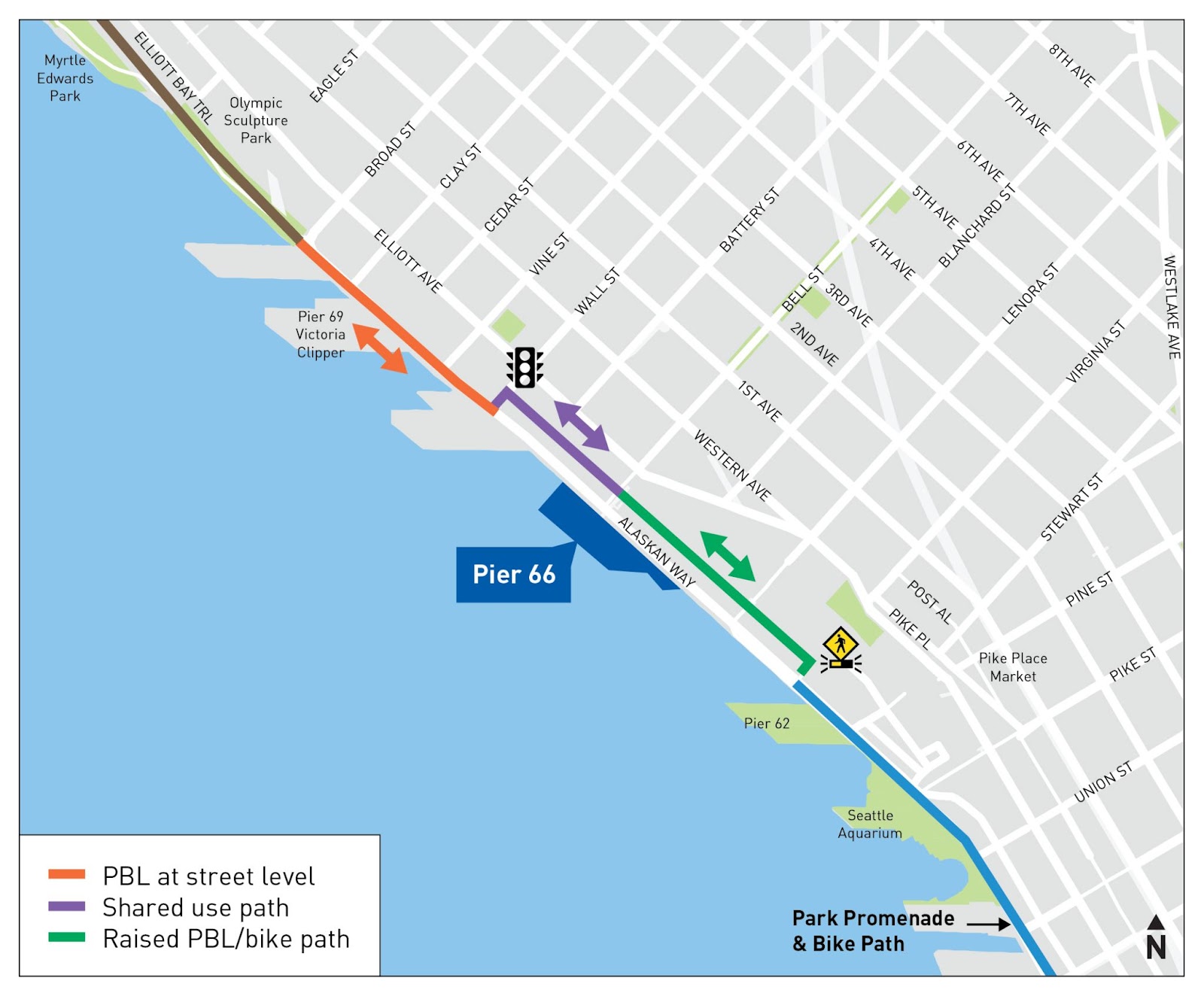 The proposed bike route along Alaskan Way, shown above, shifts bikes across the street twice in a short 5 blocks, and even changes the width of the bike path in that short distance. For comparison, the existing waterfront trail shown below is wider and more direct, sticking to one side of the street. 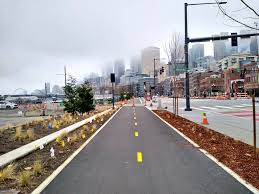 A key Ballard-area gap in Seattle’s premier Burke-Gilman Trail has been hotly contested for more than 20 years. Once completed, people will be able to walk and bike along the fully separated path from Golden Gardens to Bothell. But deep-pocketed special interest groups continue to delay plans to construct the path along Shilshole Avenue NW.

Cascade is again party to the city’s lawsuit to build the Missing Link along the Shilshole alignment. We know that this is the most safe, simple, and direct route–and it is the route people who bike currently use. Getting the trail built along this path is the best way to prevent further injuries to people riding over the railroad tracks, and to finally complete this project. We continue to lift the voices of people who use–or want to use–this route. There is no denying that filling the Missing Link is essential to completing the Seattle Bike Network. 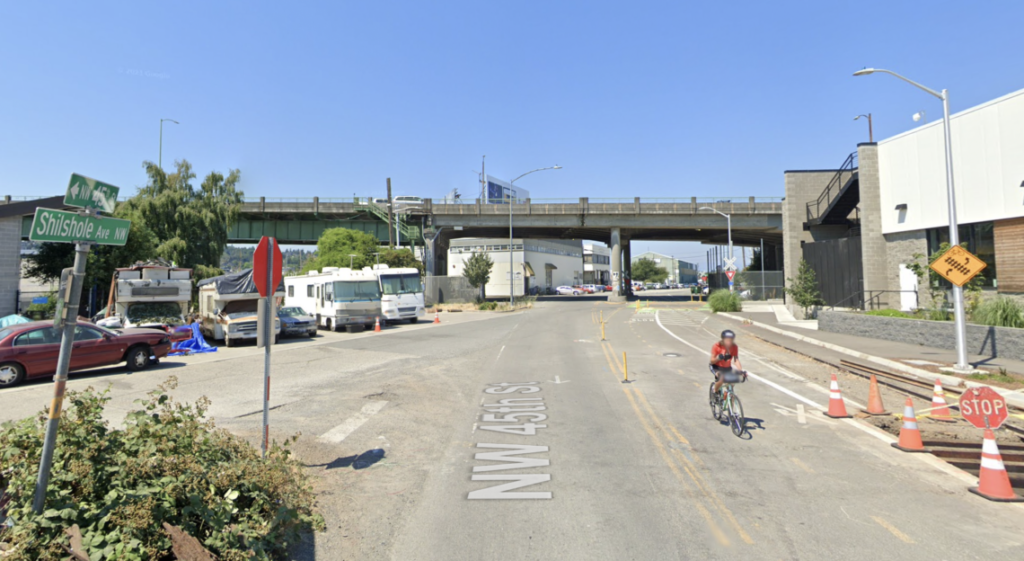 In the photo above, makeshift bike lanes near the Ballard Bridge guide riders near the railroad tracks, but it’s no substitute for a safe and fully separated trail.

Planning is a lot like eating your greens. You know you have to do it, but it’s not always fun. Right now the City of Seattle is updating their plan for which street improvements they’ll make in the next 20 years – including which parts of the bike network should be built next. Once complete, the impacts will be felt for years in the form of Seattle's bikeability. 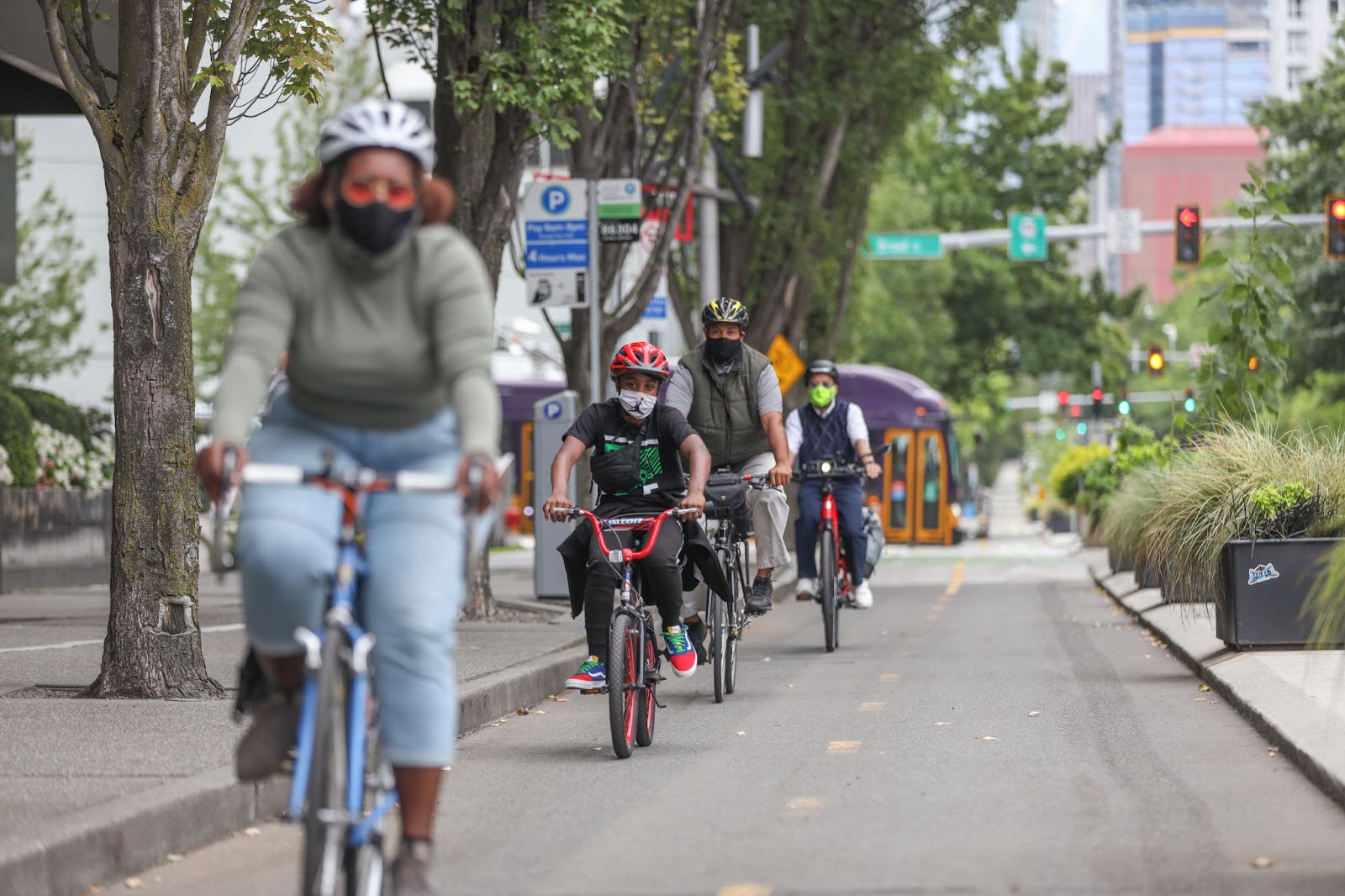 We’re advocating, alongside partner organizations, that the city centers safety, equity and climate in the plan.

We envision a city where everyone who wants to, can get around safely, comfortably and conveniently by bike, wherever they’re going and whomever they are. Over the next 18 months we’ll be beating the drum to make sure the STP paves the way toward that reality. Sign up to receive updates on the Seattle Transportation Plan.