Bicycling has boomed in popularity during the pandemic as more people than ever ride bikes for healthy outdoor activity. Unfortunately, COVID-19 has had the opposite impact on King County’s top public health official.

“Sadly, since COVID began my ability to bicycle has gone down the drain,” says Dr. Jeff Duchin, public health officer and chief of Communicable Disease Epidemiology and Immunization for Seattle and King County.

“I’m working pretty much nonstop most days, so my fitness has taken a huge hit,” says Duchin, who loves long rides and has participated in Cascade’s 104-mile High Pass Challenge many times, as well as RSVP and STP–formally named the Kaiser Permanente Seattle to Portland Presented by Alaska Airlines. “I probably get on my bike in a month now as much as I used to in a week.” 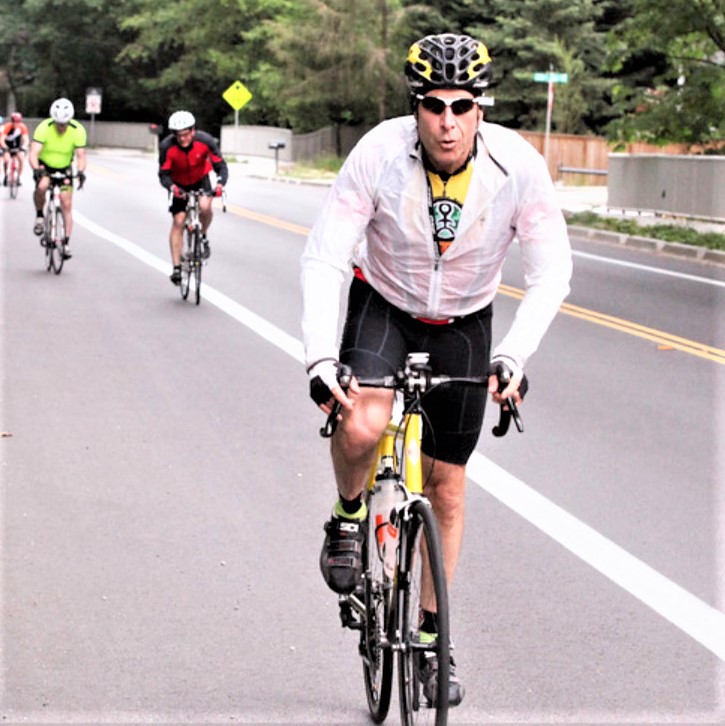 Due to his hectic work schedule, which includes frequent media briefings and coordination with the federal, state, and local officials to oversee the county’s pandemic response, Duchin fears he may not be able to ride STP this year. “I am hoping to do STP,” Duchin says, “but at the moment I’m preoccupied with COVID.”

It wasn’t always so.

Duchin’s love of bicycling began in his childhood on the New Jersey coast, where he and his friends rode bikes everywhere. But he stopped riding when he got into college and medical school.

“I only got back into bicycling in my mid-40s,” he says, after friends convinced him to join a bike tour. “I was instantly hooked.”

Duchin signed up for the Cascade Training Series, known as CTS, to learn about bicycling technique, safe riding skill, and riding for fitness. “From there I did many Cascade rides and events.”

Duchin likes the communal experience of STP, which returns as an in-person 206-mile ride on July 16-17 after two years of virtual challenges during the pandemic. “My riding philosophy is to finish strong. You want to feel good at the end. I’m not much of a sprinter or beer drinker but I always enjoy a cold one at the beer garden at the STP finish in Portland.” 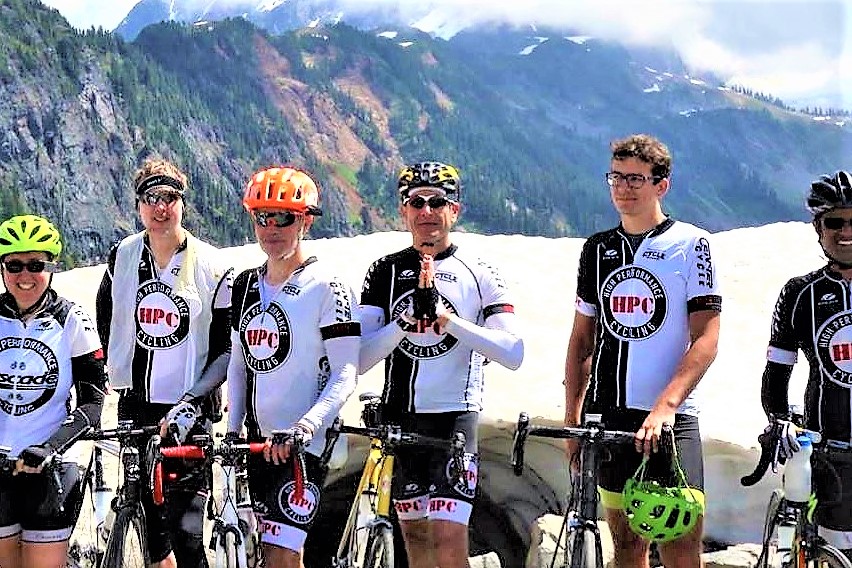 Praying for an end to the pandemic--and maybe one cold beer.  Duchin, center, shown with some fellow High Pass Challenge riders.

Duchin considers long rides meditative and mindful. “You have to focus on your body and your breathing, and you have to be hyper aware and mindful of your environment. You can’t be distracted. I also like the endorphins that come following a long-distance endurance event.”

In addition to the rare beer, bicycling also allows Duchin to enjoy other treats: “I get to eat pie.”

Prior to the pandemic, one of Duchin’s annual trips was a 285-mile, multi-day ride from Seattle to Hornby Island in British Columbia, where his family would meet him for some rest and relaxation at a remote cabin lodge. “That ride is one of the highlights of my year. I leave at about 5 a.m. everyday. I enjoy the silence of riding in the early morning.”

The trip to B.C. was not possible in 2020 due to the Canadian border closure. Last summer, during a period when the border reopened and it seemed the pandemic was subsiding a bit, he decided to resume his annual bike trip to Hornby Island. It was the only vacation he has taken since the onset of the pandemic.

Unfortunately, even during this brief respite from work, Duchin was unable to take a break from his public health duties. “The place where we were staying had a COVID outbreak among the staff,” he says. “It’s a remote location, and there were no local public health professionals available, so I helped them manage the COVID response.”

Duchin’s friend Jeffrey Powers, a Cascade Volunteer of the Year whom we profiled in the story, “Titanic Explorer, Submarine Commander, Croissant Lover: Jeff Powers Loves to Ride and Volunteer,” rode with Duchin from Seattle to Bellingham before Duchin rode the final legs to Hornby Island by himself. Powers says Duchin “epitomizes what it means to be a public servant. He’s compassionate and caring and he devotes himself to maintaining and improving the health of all of us.”

Powers says he misses the long rides of 80, 90, and 100 miles he used to do with Duchin before the pandemic. “He’s a huge fan of one-day STPs. I hope to join him again this July.”

Whether that happens will depend on how COVID-19 caseloads are trending, and how the virus and the public act. Duchin recommends that people get all of the CDC-recommended vaccinations and boosters, and that–for now–people wear masks in crowded indoor settings and in poorly ventilated areas.

Despite having no time for long fitness rides, Duchin still takes short bike rides for transportation. He gave his car away a year ago and bicycles or walks for nearly all of his daily errands, grocery shopping, and commuting.

Duchin’s devotion to active transportation is based on its health benefits and his concerns about the climate crisis. “Climate change is the single greatest health threat facing humanity,” he says.

If nothing is done to dramatically reduce greenhouse gas emissions, infectious diseases will become more common as temperatures rise and pathogens previously confined to the equatorial tropics spread northward and southward, scientists say. Rising oceans, bigger storms and wildfires, longer droughts, and other climatic shifts will cause migrations, refugee crises, and human suffering on a massive scale, according to climate scientists and public health officials. It is imperative to take action now to stave off the worst consequences, Duchin says.

“Before COVID, focusing on the health effects of climate change and the urgent need to rapidly reduce greenhouse gas emissions was going to be one of my top professional priorities,” Duchin says. “The biggest sources of greenhouse gas emissions are also the biggest sources of ground-level ozone, or smog, which contributes to cardiovascular disease, kidney disease, lung disease and many other health problems.” 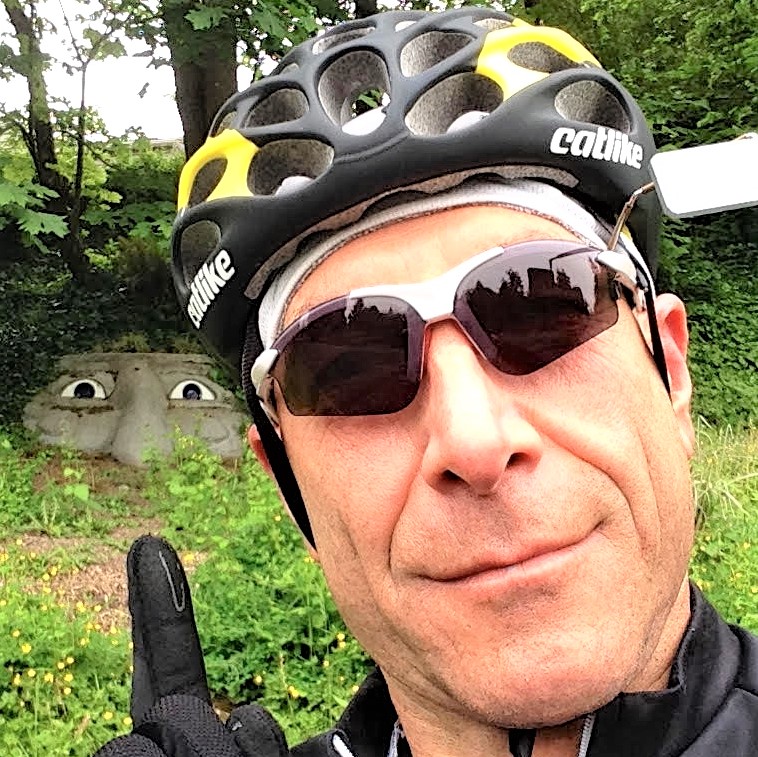 Gasoline- and diesel-powered vehicles are the single largest source of climate pollution in Washington state. Reducing automobile trips would not only clean our air, it would also make our streets safer for people bicycling and walking, Duchin says, noting that motor vehicles are one of the biggest dangers to people walking and bicycling.

“There are huge health co-benefits to reducing greenhouse gas emissions in addition to avoiding a climate catastrophe,” says Duchin, who tweeted his support for Cascade’s Pledge to Pedal campaign in May, which challenges people to swap a bike trip for a car trip each week during Bike Month.

We hope to see Duchin riding STP this summer. If he joins STP, it will be a good sign that the pandemic is under better control and that the good doctor has more time for the long endurance rides that he so enjoys.