A ‘Pledge to Pedal’ Practice Ride to the Grocery Store 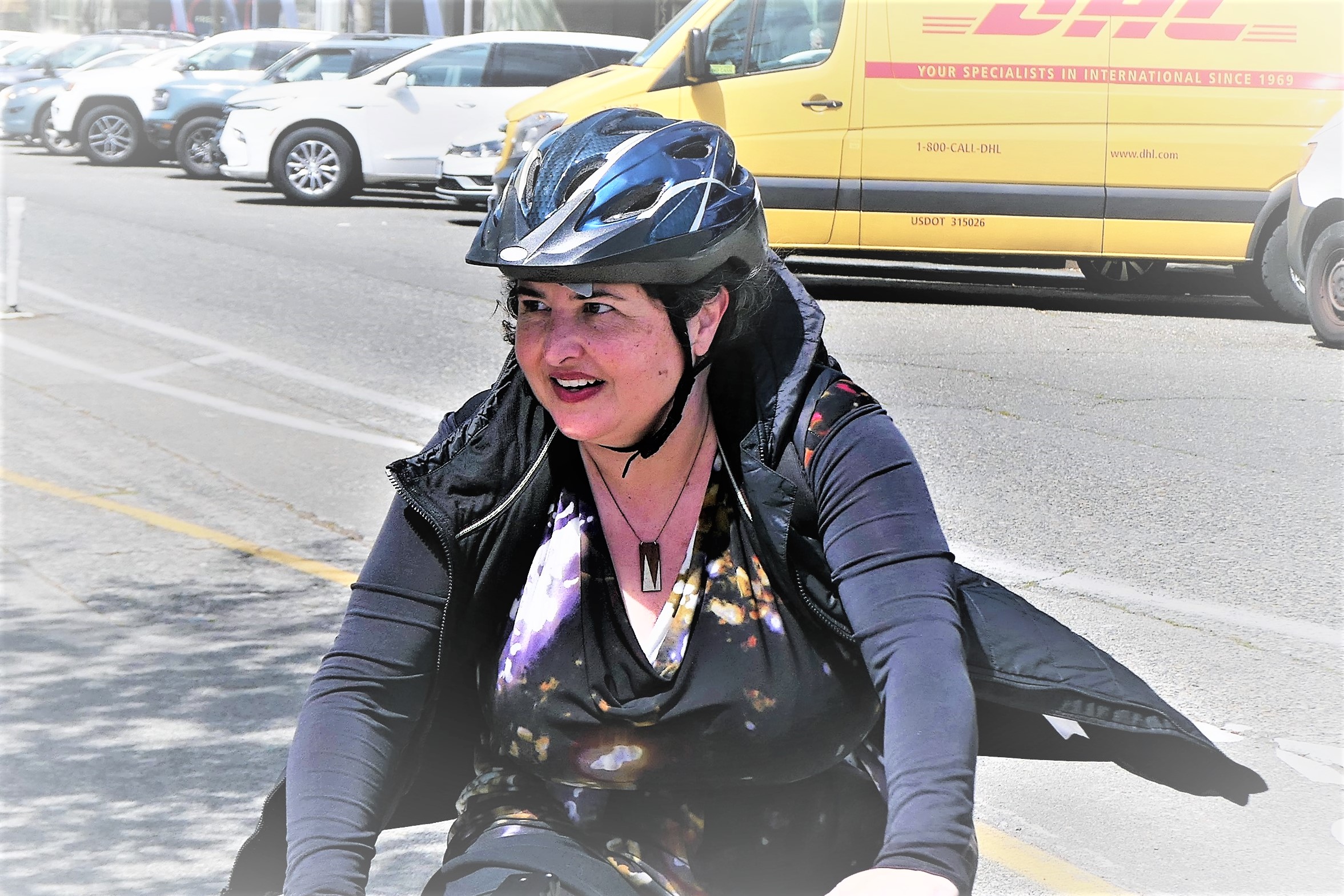 Housing advocate Laura Loe is a huge supporter of creating more bike-friendly communities. As someone who didn’t learn to confidently ride as a child, however, she has been hesitant to jump on a bike in Seattle.

The founder and executive director of Share The Cities recently signed up for Cascade’s Pledge to Pedal campaign, which encourages people to swap at least one car trip per week with a bike trip during Bike Month in May.

When Loe told Cascade’s Seattle Policy Manager Rachel Schaeffer that she would like to practice riding to the grocery store, Schaeffer and I offered to be her ride buddies.

We met at Loe’s apartment and discussed the route before departing. Loe took a Learn to Ride class from Cascade several years ago and bought a bike from Recycled Cycles, but she never rode as much as she had hoped.

“Then the pandemic happened, my bike was sitting in the garage, and I thought: ‘It’s time to go learn.’”

Many of the actions involved with riding a bike are second-nature to people who have been riding for years, Loe said. But for people newer to the activity, these actions require thought, practice, and attention.

“Getting on and off the bike is like a complicated dance move,” says Loe. “You have to do all these things at once.”

Along the Canal and Over the Bridge to PCC We Go

We started by riding sidewalks and walking our bikes across streets on crosswalks until we reached the Ship Canal Trail, a paved waterfront trail. It was a lovely morning, spring flowers were blooming, and we rode cautiously, pausing at intersections and practicing hand signals. 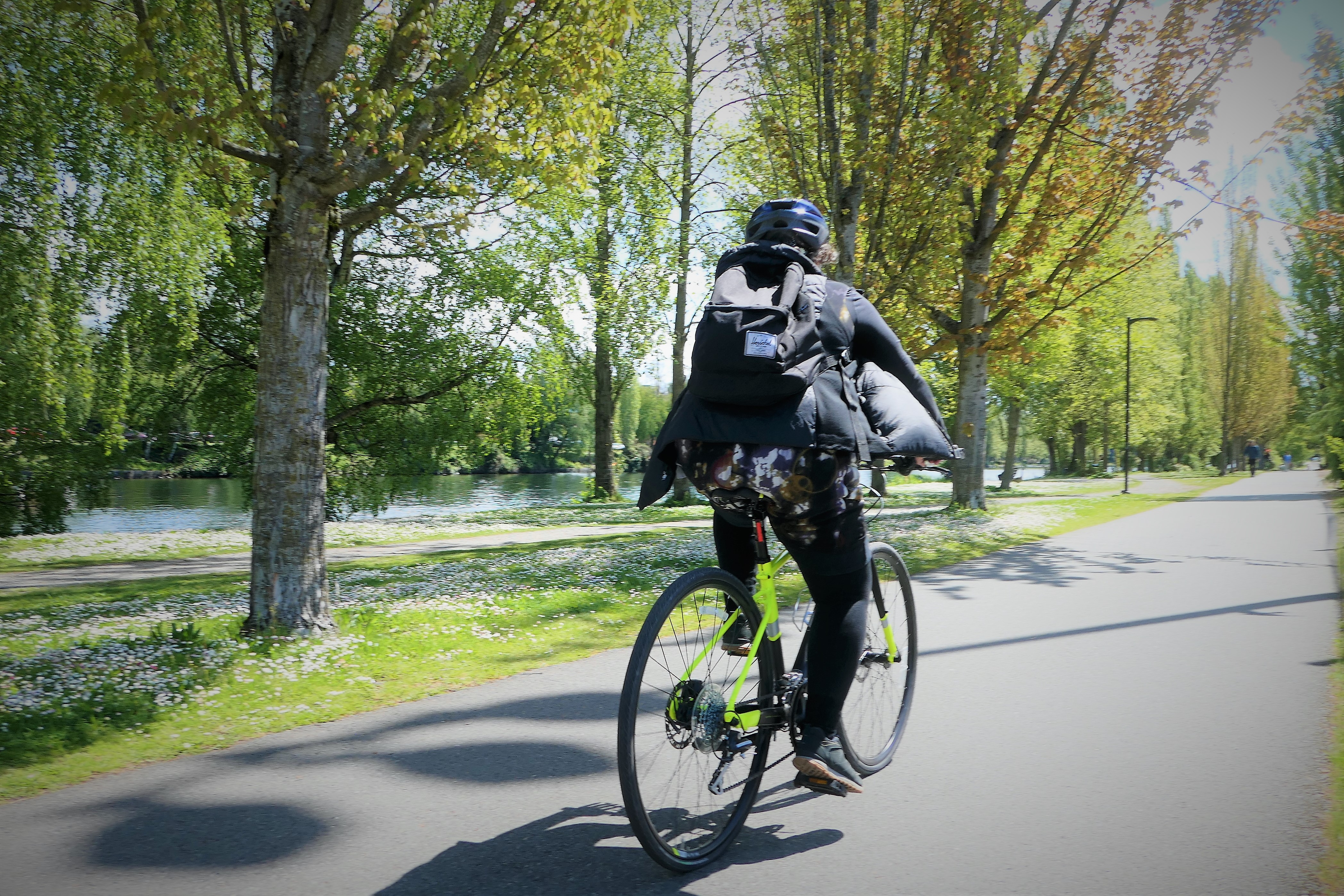 Loe’s destination was the PCC Community Market in Fremont. Loe normally drives or takes the bus to grocery shop. But following a corrective surgery six months ago, she is “in better shape and trying to get stronger.”

While there are supermarkets closer to her home, the PCC is the easiest and safest to reach by bike. To get there, however, Loe would have to ride up to and over the Fremont Bridge, which she had never done on a bike. 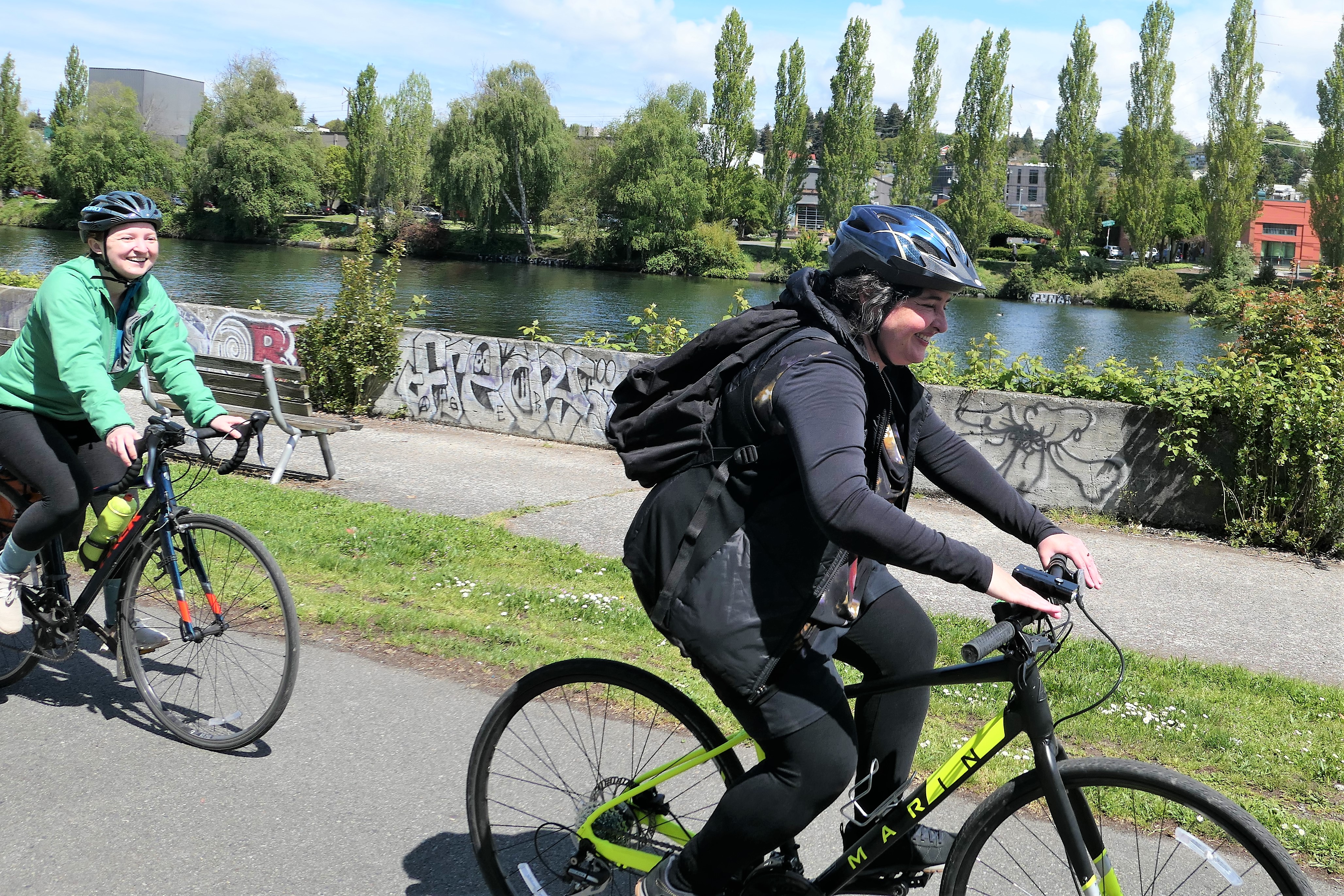 Despite some trepidation, Loe easily navigated the short ramp that leads from the Ship Canal Trail up to the street, where we pedaled on the sidewalk to the Fremont Bridge. Riding over the Fremont Bridge proved to be easier than Loe had anticipated because it was not crowded.

We proceeded to the PCC, where Loe practiced using her bike lock for one of the first times and bought a few grocery items to carry in her backpack. Success. 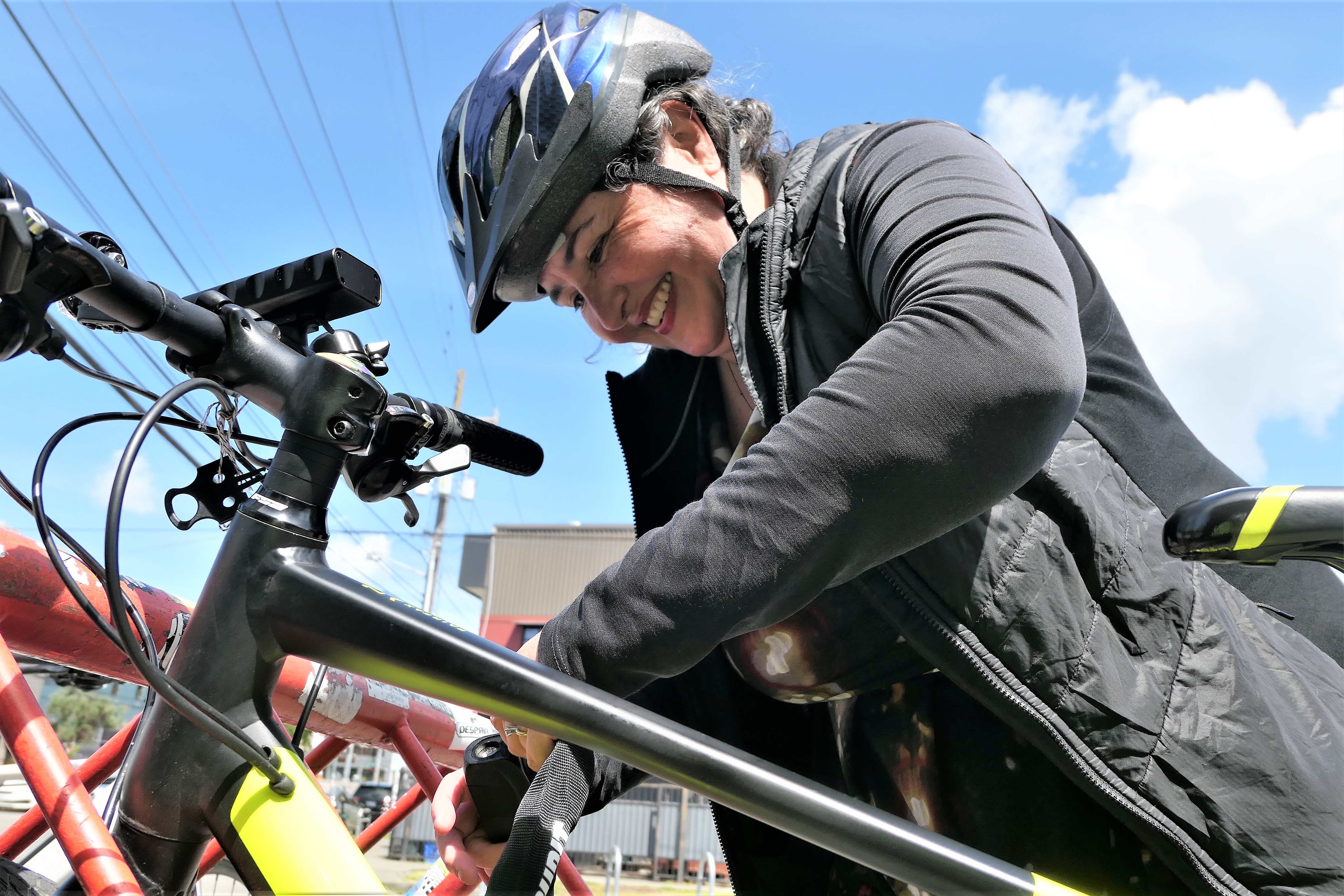 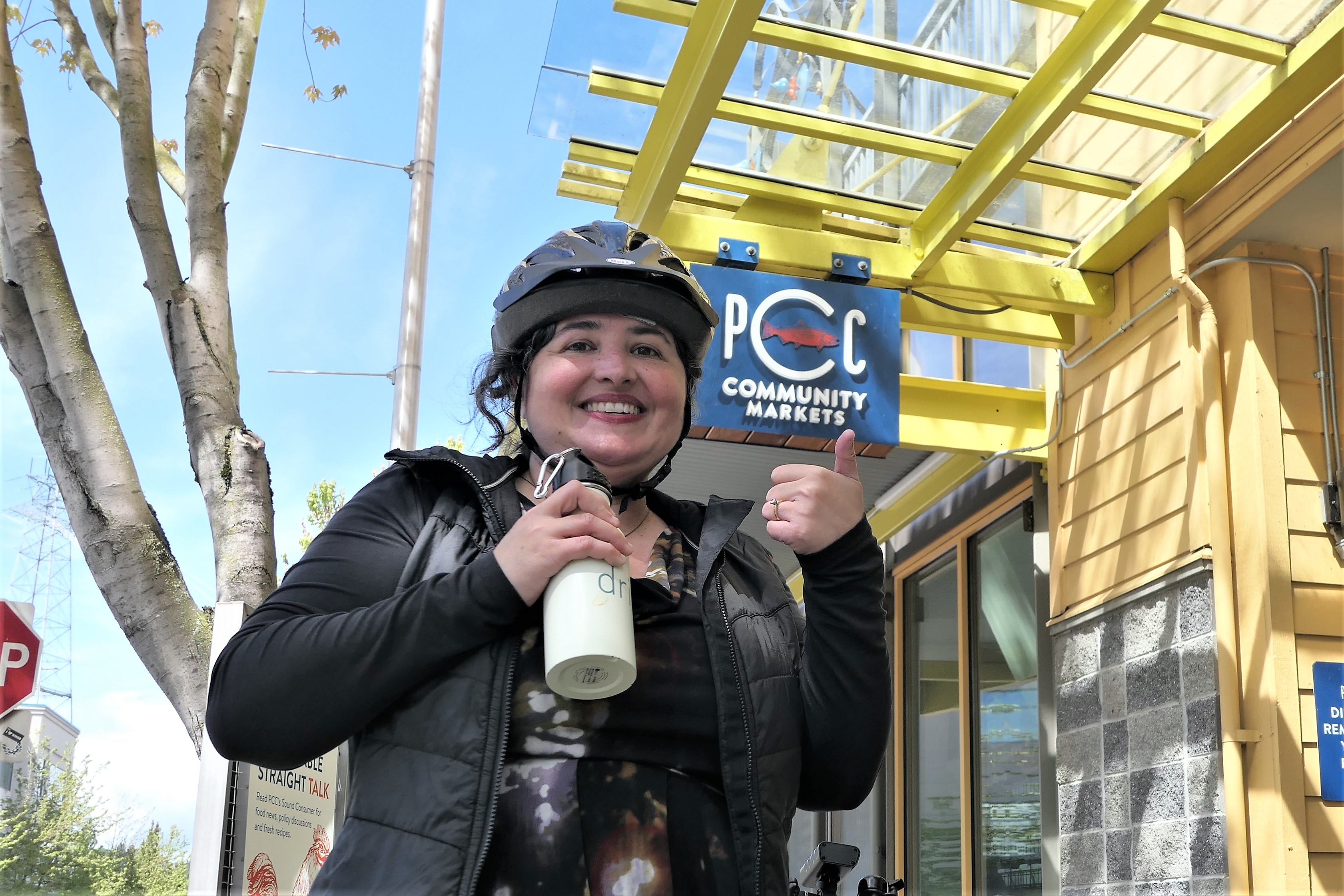 There was just one more stop: Theo’s Chocolate, located several blocks away. We again locked our bikes, masked up, and bought some chocolates for our loved ones.

Our backpacks loaded, we returned the way we had come, ending at Loe's apartment. “That was awesome. Confidence-building,” she said. “I could see myself doing this again.”

“Going over the Fremont Bridge was fun because it was a beautiful morning and there weren’t many people on it, and it wasn’t as narrow as people say it is,” Loe said.

Loe noted that it’s important for people who bicycle frequently and confidently to understand how complicated riding on shared trails and bike lanes can be for someone who is learning. She also offered encouragement to people who are learning to ride more.

“You have to practice a little bit every day,” she said.

Even though Loe has a few practice rides under her belt, “I still have to think: which leg do I start with? Where am I going to shift my weight? Am I going to fall? Do I get off on the right or the left?” 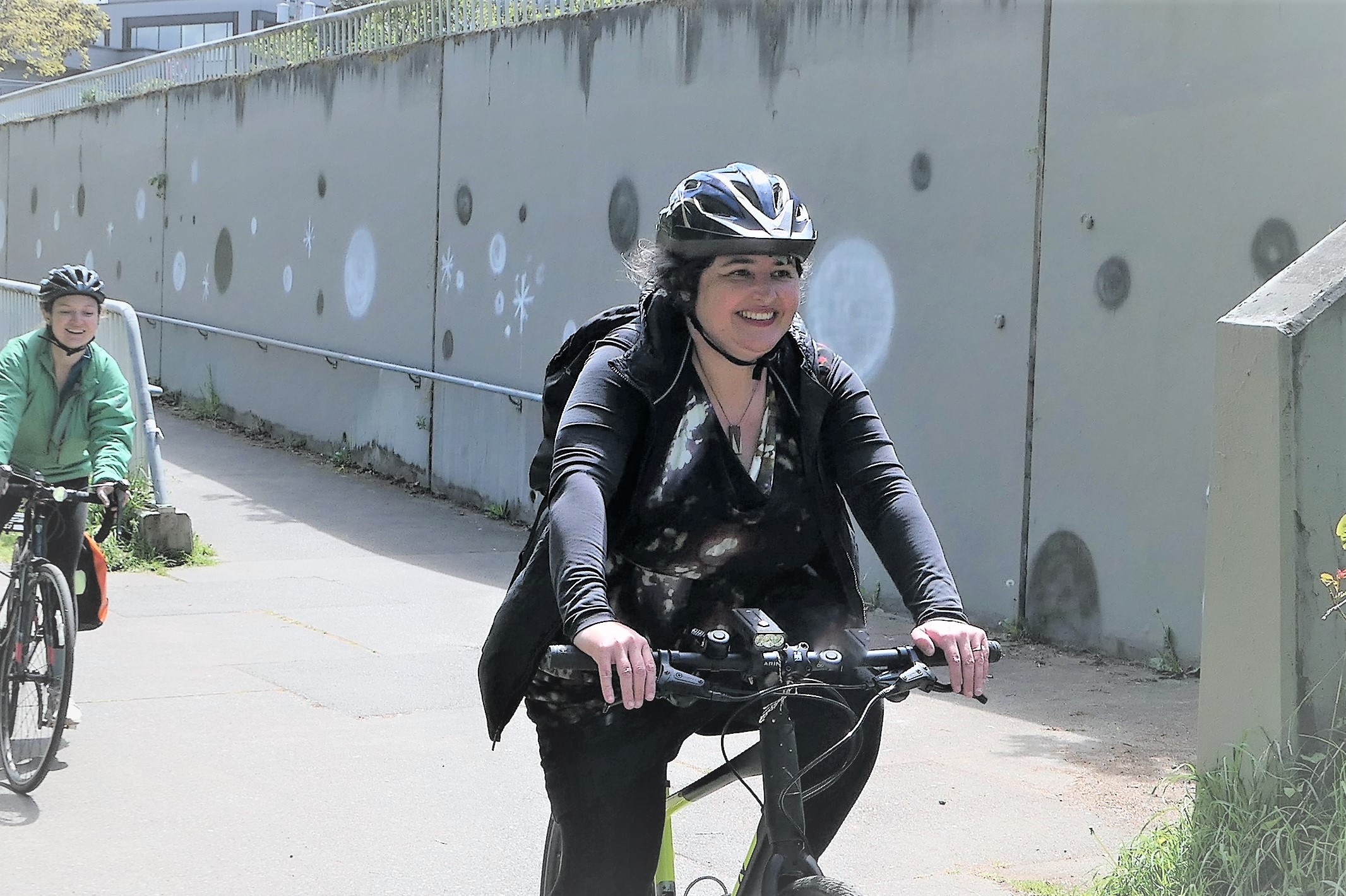 Cascade is excited that Loe is working on her skills and planning to do more shopping by bike. We are also thankful to Loe for participating in our panel discussion on May 12 about the impact of land use and community planning on climate justice and climate resilience.

Learn about and sign up for our adult classes including Urban Cycling Techniques, Fix-a-Flat, Learn to Ride, and more.

Thank you, Laura, for pledging to pedal! 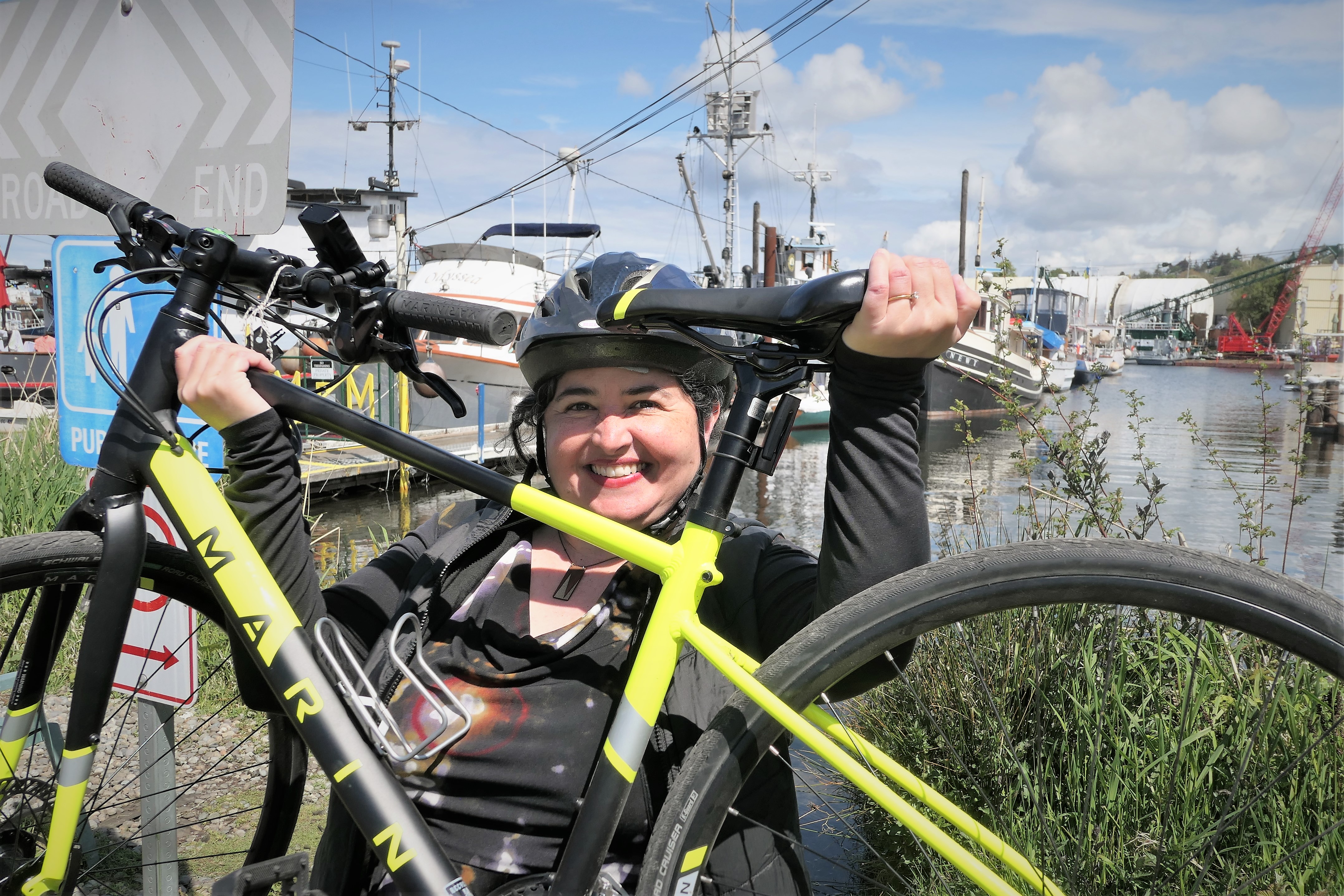