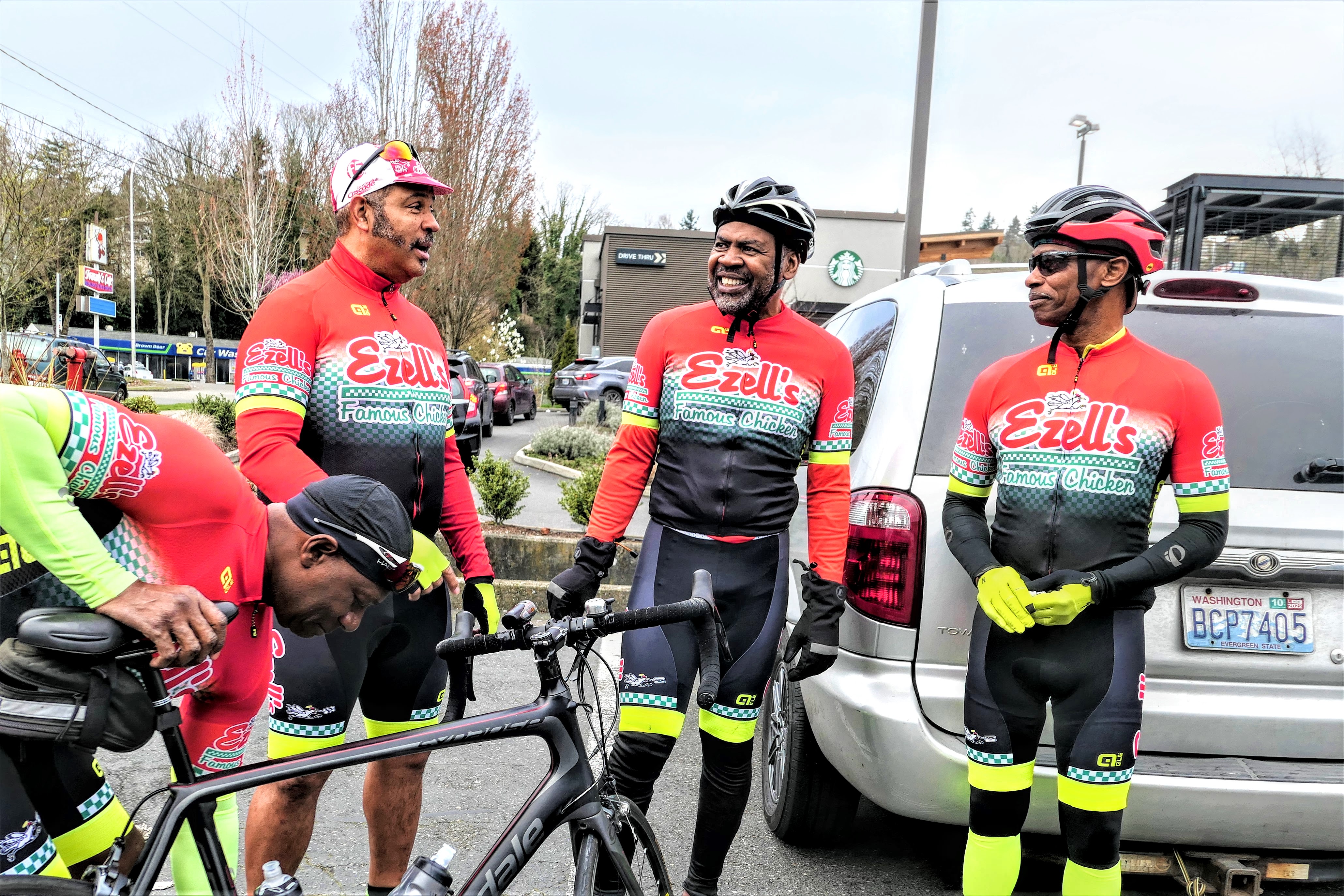 It’s a chilly Saturday morning outside the Ezell’s Famous Chicken shop in Renton, and Lewis Rudd is joking around with his cycling buddies as they prepare for a 60-mile training ride.

Rudd, who is preparing for his 31st Kaiser Permanente Seattle to Portland Presented by Alaska Airlines, is so fit at age 67 that he could probably go ride the 206-mile STP route to Portland right now.

Rudd enjoys sharing his love of bicycling, and he has recruited a co-ed team of BIPOC riders to train for and ride STP with him. “We’re still deciding whether we want to do STP in one day or two,” says Rudd, co-founder and CEO of Ezell’s, an iconic Seattle business that sells the region’s most finger-licking chicken. 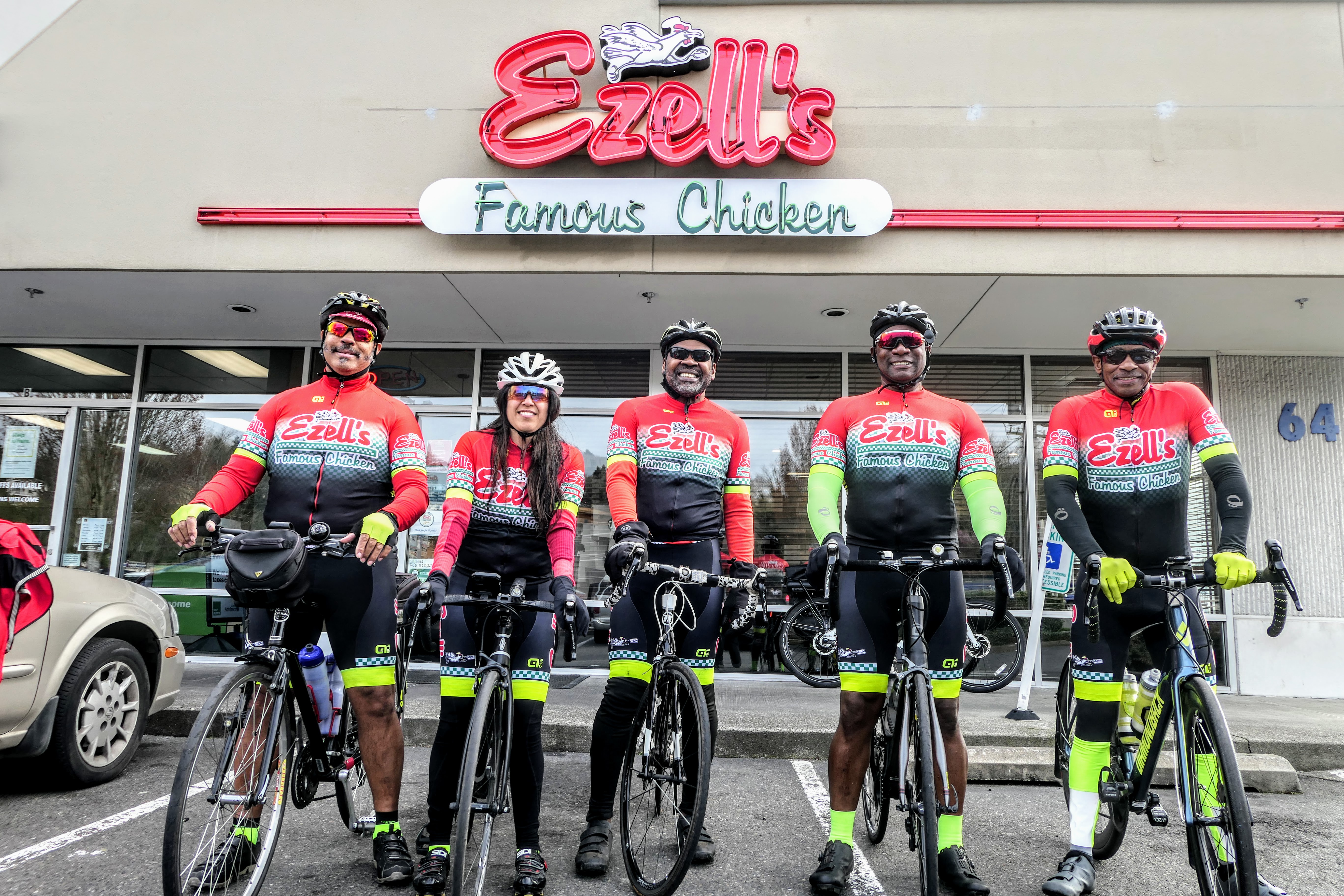 Lewis Rudd, far right, is a bicycling mentor who loves to share his passion for riding.

This year, Rudd is partnering with Cascade to encourage more riders of color to participate in STP, which returns July 16-17 following a two-year hiatus.

“Bicycling has played such an important role in my life,” Rudd says, “and I want to help get more people of color on bikes to experience the fun and fitness benefits.”

Bringing Some Sizzle to the STP Affinity Bike Club Partnership

“Lewis is a Seattle hero and inspirational entrepreneur who donates a lot of his time and resources to support the community,” says Cascade Executive Director Lee Lambert. “He is also a bicycling mentor, and he wants to pass on that love of bikes to others and open doors for people of color to experience the joy of riding bikes.”

Learn more about the Cacade’s Affinity Bike Club Partners and participating groups in our previous posts about All Bodies on Bikes, the Asian Bike Club, and Gruppetto Cycling.

Timothy Fields trained with Rudd and rode a DIY STP last year, when the in-person event couldn’t be held due to the pandemic. With the return of STP and its up to 8,000 riders, Fields is training with Rudd for his 13th STP. 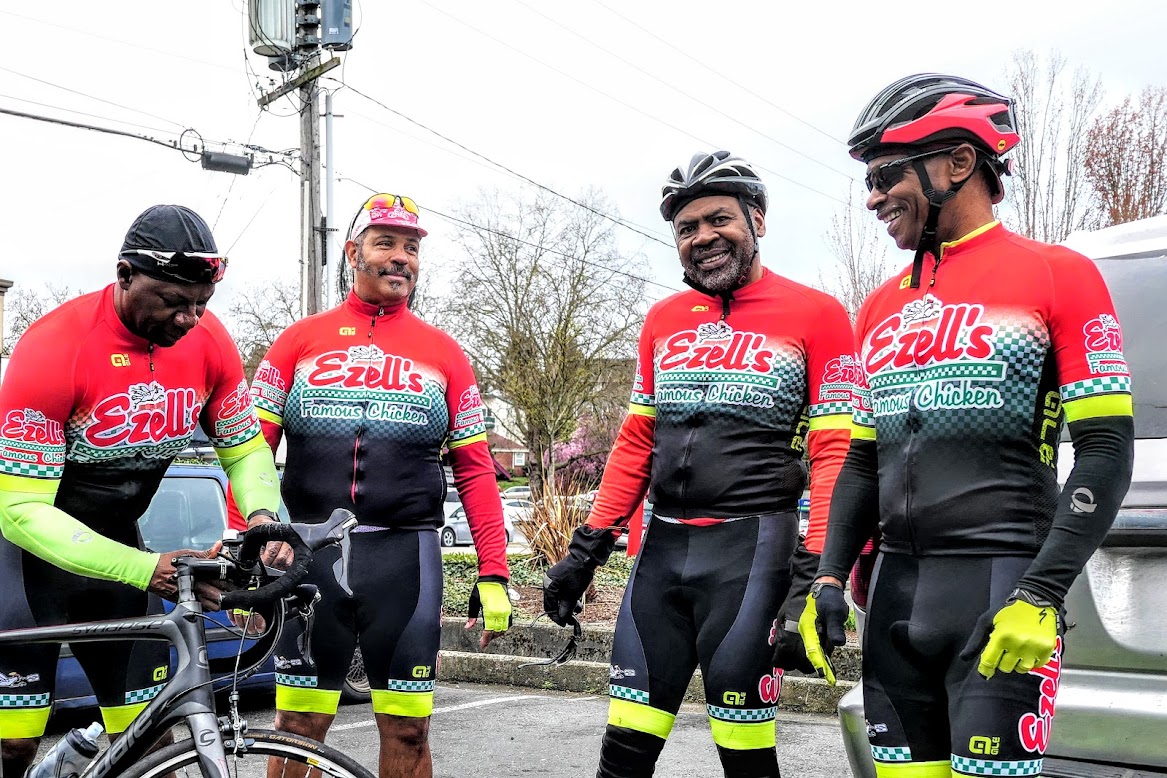 “Being African American, it makes me happy to see other African Americans riding bicycles,” Fields says about riding with Rudd and the Ezell’s crew. In addition to Fields, Rudd’s 2022 STP training squad includes: Vanisha Austin, Mike Washington, and Oliver Isaac. 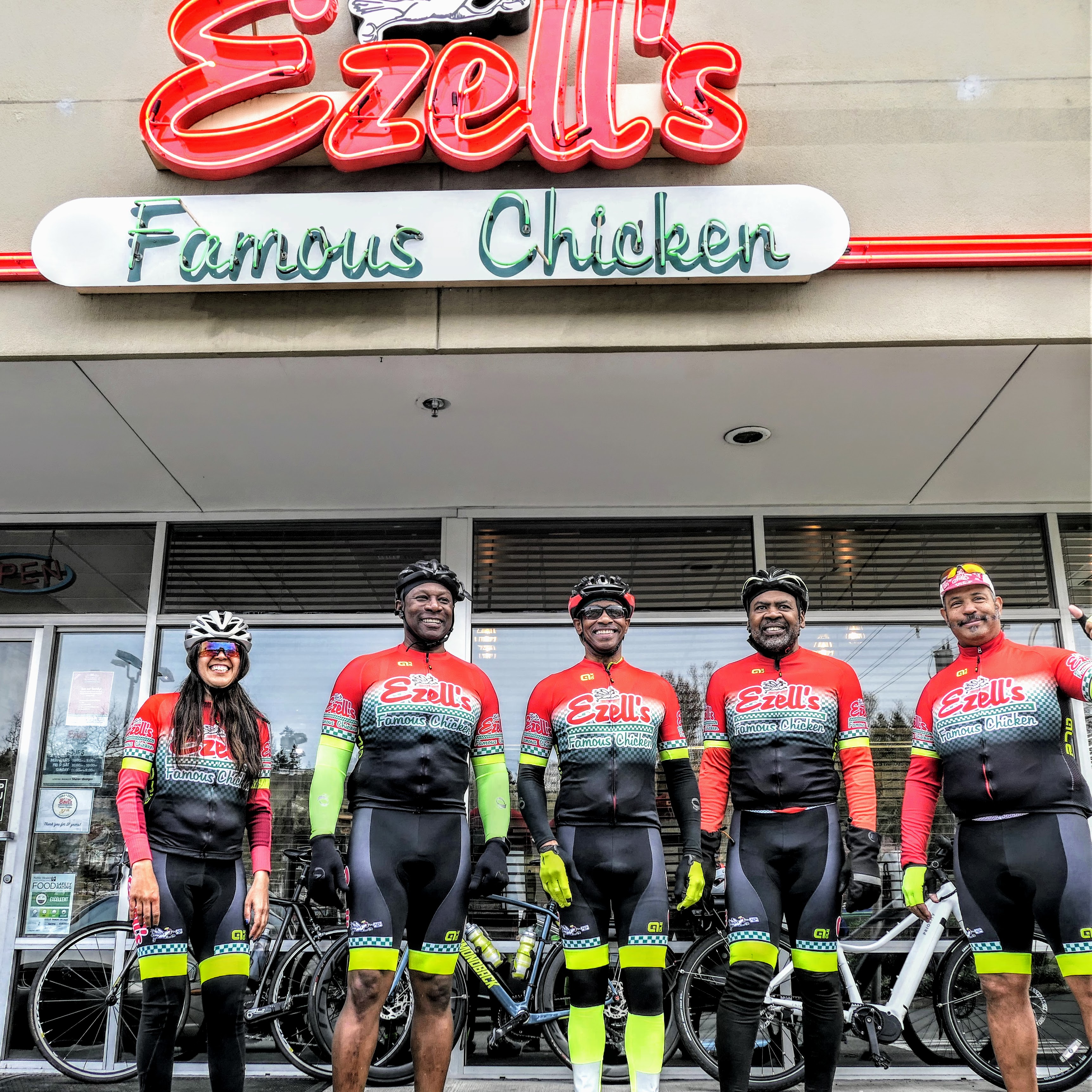 Rudd has been riding bikes seriously for nearly four decades. Last year, he created a team to help him finish a DIY STP–206 miles over two days–because he couldn’t stand the idea of going two years without his annual tradition of riding from Seattle to Portland. Another Rudd tradition is his annual birthday ride, when he bikes the same number of miles as his age. This year it was 67 miles.

Rudd and his wife, Jackie, took up cycling seriously in 1984 after a friend invited them out for a spin. Rudd laughs when recollecting the matching red sweatpants outfit he wore to match an old red Puch road bike he rode back in the 1980s. 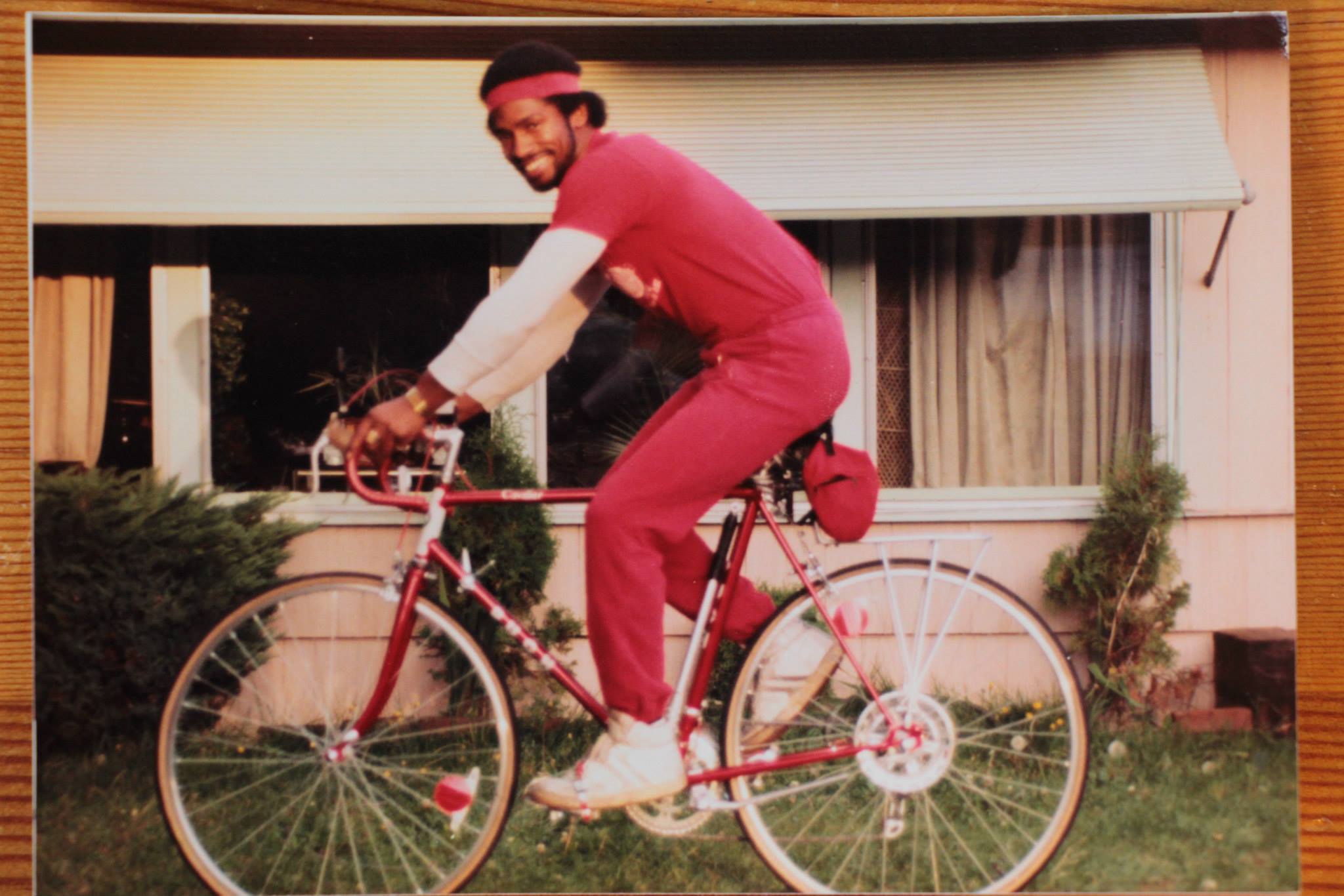 In addition to his lightweight Diamondback road bike, he owns a Stromer e-bike that he uses for commuting–and which he rode in STP one year. Cascade allows electric bikes in its rides and on STP, and several Cascade board members are planning to ride STP electrified.

Rudd grew up in Texas and moved to Seattle after serving in the military. In 1984, he and his childhood friend Ezell opened their first restaurant in Seattle across from Garfield High School. From five employees that first year, Ezell‘s has expanded to 17 locations with more than 325 employees. His brother and sister are active in the business.

Rudd and Ezell’s support a variety of community initiatives that lift up Black-owned businesses and lend a hand to organizations that elevate communities of color. Rudd has donated food, time, and resources to the Major Taylor Project on many occasions (including finish line fried chicken for participants in this year’s Ride for Major Taylor).

Back at Ezell’s in Renton, Rudd films a video interview with Cascade that will be shown at our Bike Everywhere Breakfast on May 25, where the theme is “Bicycles Bridge Communities.” In addition to Rudd, the video will feature devoted bicyclist and Seattle City Councilor Teresa Mosqueda, Let’s Go educators and kids, and volunteer riders participating in Cascade’s Pedaling Relief Project.

After his interview and some joking around with his team, Rudd and his crew saddle up, click in and pedal out for their 60-miler around Mercer Island. 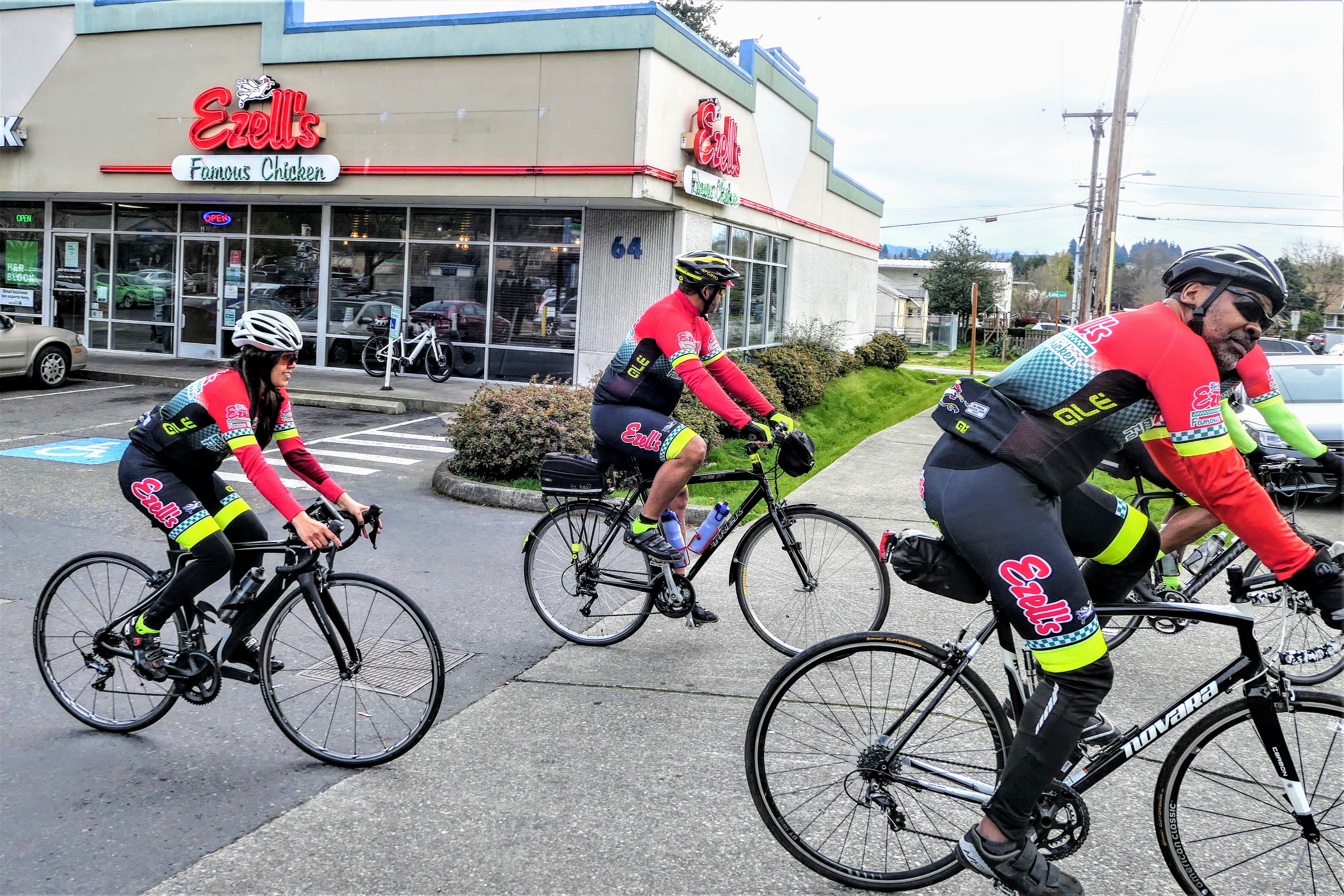 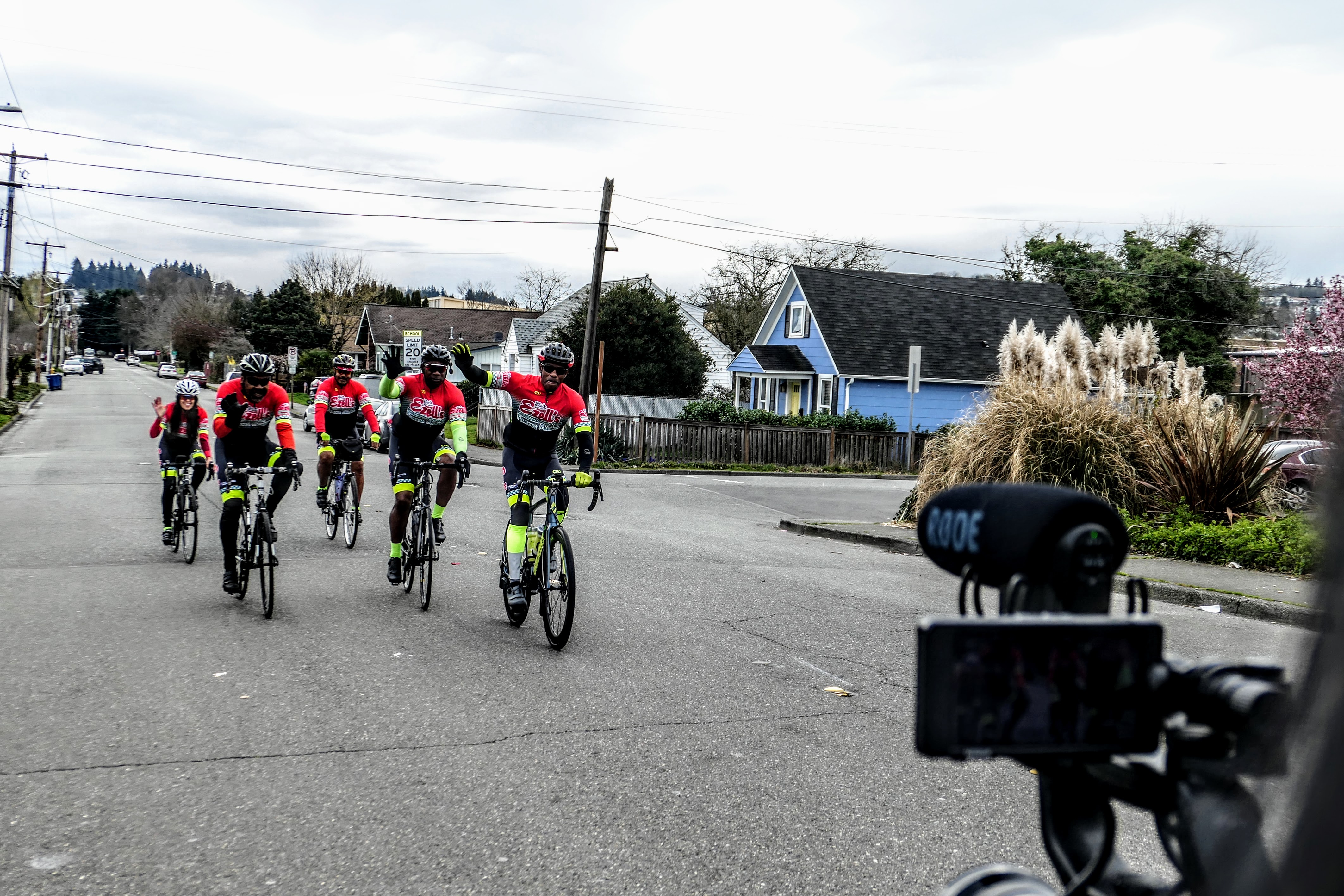 I pop into Ezell’s and grab a few pieces of chicken to go.

“The good thing about riding my bike so much,” Rudd says, “is that I can eat more chicken. It’s STP fuel!” 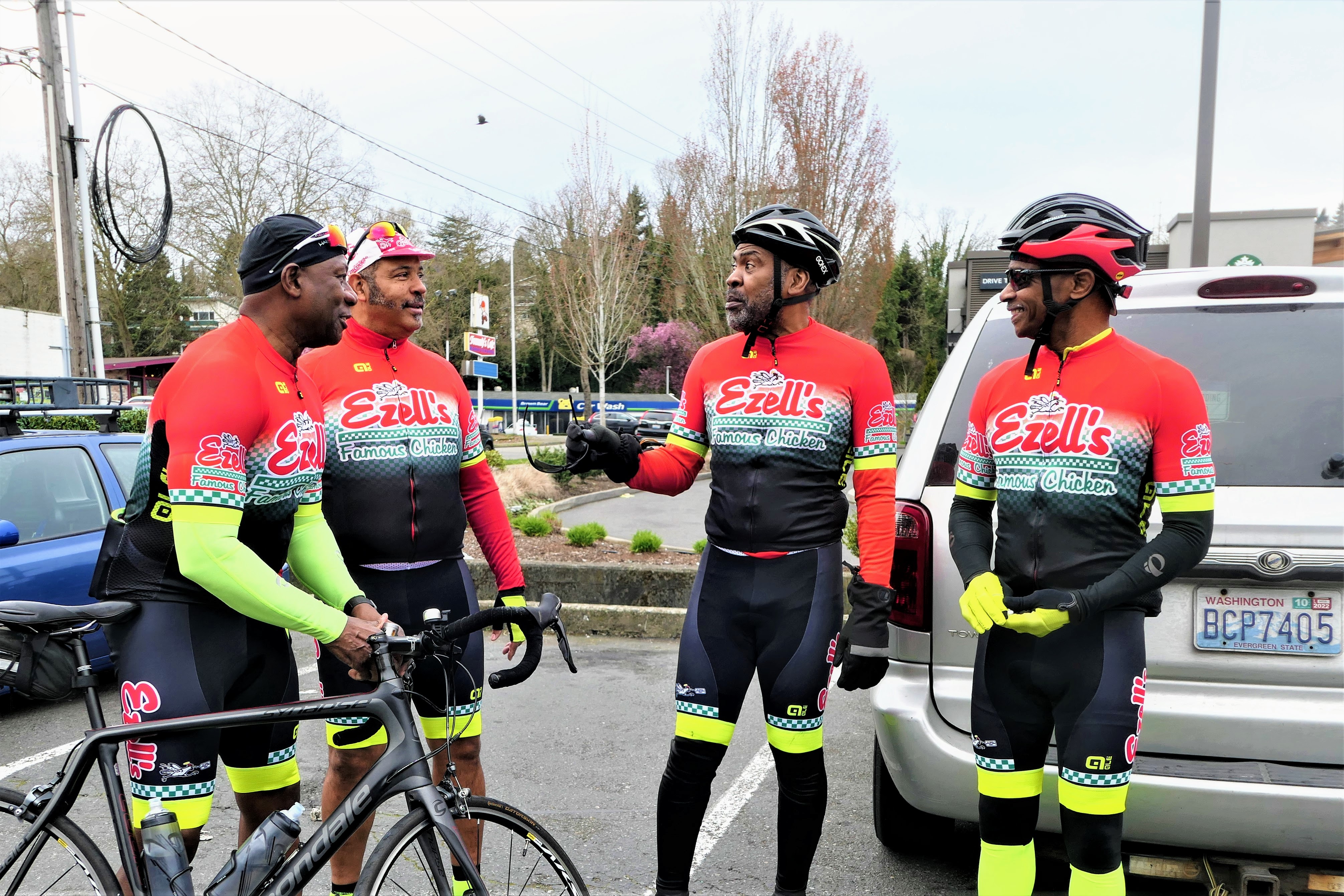