A new segment of bike trail has opened in Bellevue, the next step in building a continuous trail from Seattle to Idaho. 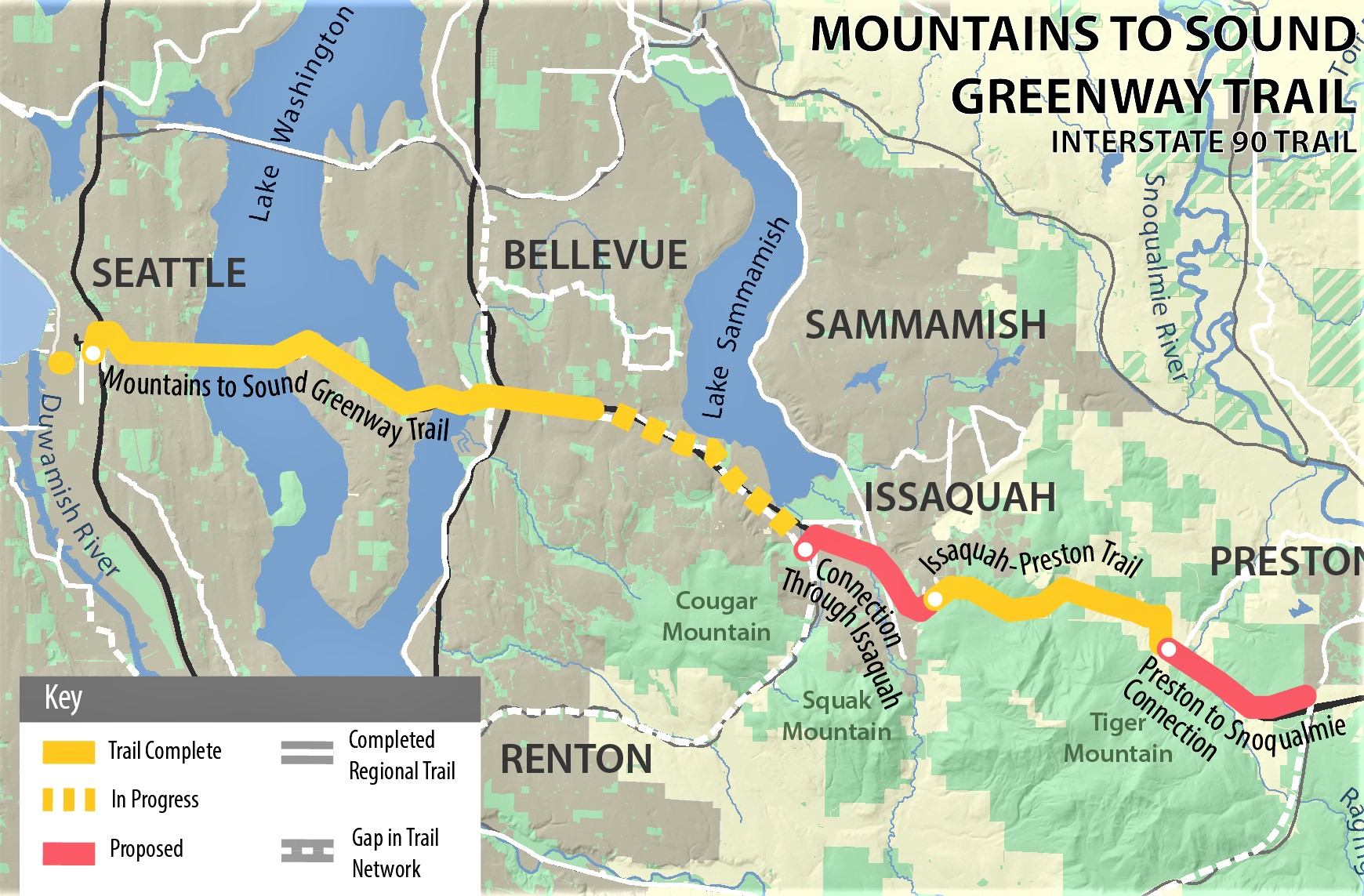 Imagine crossing the state–and even the country–entirely by bike on safe and separated trails.

That dream moved a small step closer to reality with the recent completion in Bellevue of a new paved segment of the Mountains to Sound Greenway Trail, which will one day enable people to ride from downtown Seattle to Idaho–almost entirely on trails.

The new 1.2-mile segment of paved trail enables people to pedal through the congested Factoria business district of Bellevue, and it connects to the I-90 Trail that extends into downtown Seattle.

A ribbon cutting with elected officials was held on Jan. 7 to open this new trail segment, which includes a bike and pedestrian bridge over Factoria Boulevard and a tunnel beneath the Interstate-405 and Interstate-90 ramps. 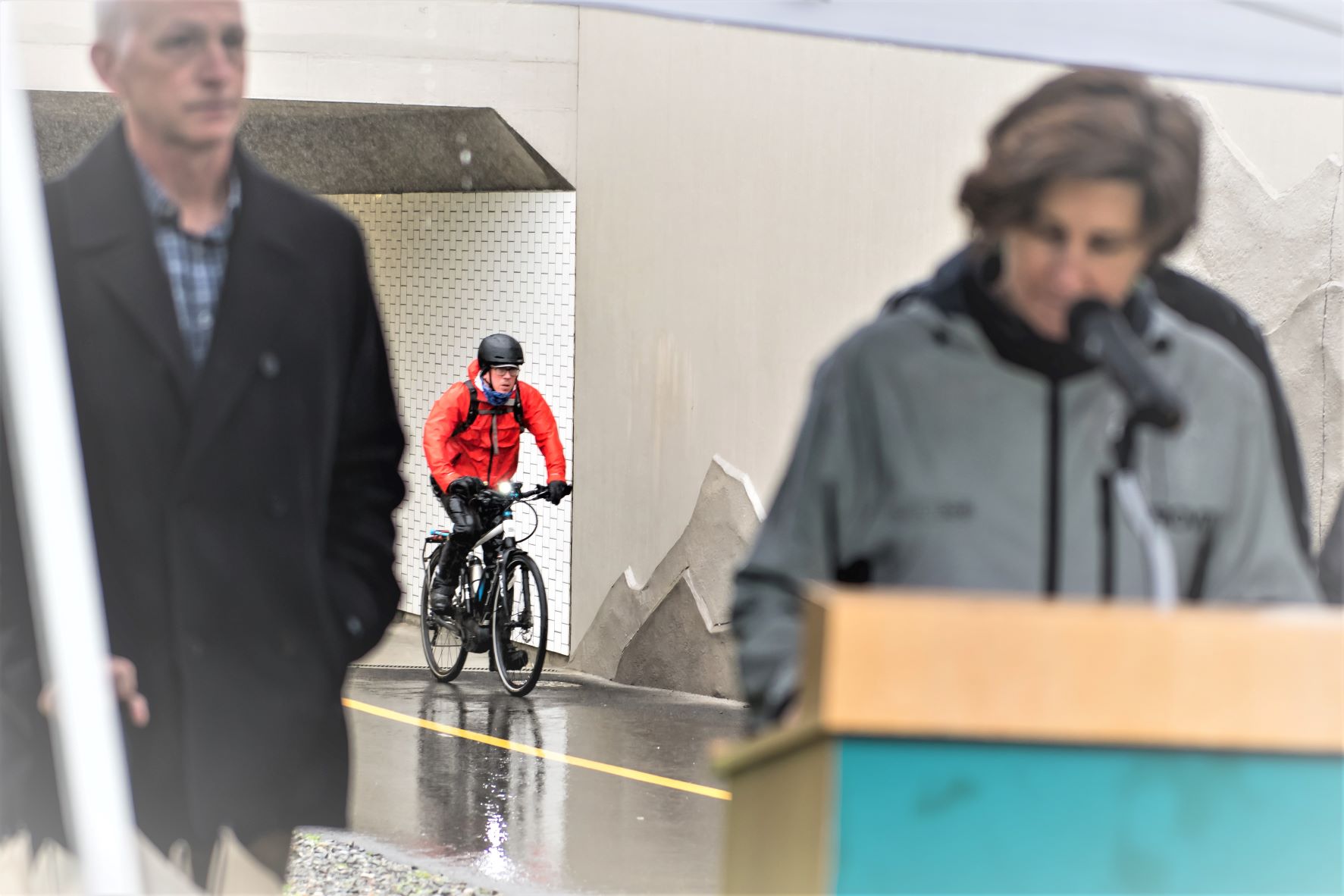 A rider comes through the new tunnel during the rainy news conference and ribbon cutting.

“This is a major improvement for Bellevue’s pedestrian and bicycle network, and it will also be a tremendous benefit for regional users,” said Bellevue Mayor Lynne Robinson, who rode her Rad Power Bikes electric bike to the event. Other elected officials attending included U.S. Reps. Adam Smith and Rick Larsen, and state Rep. Vandana Slatter. 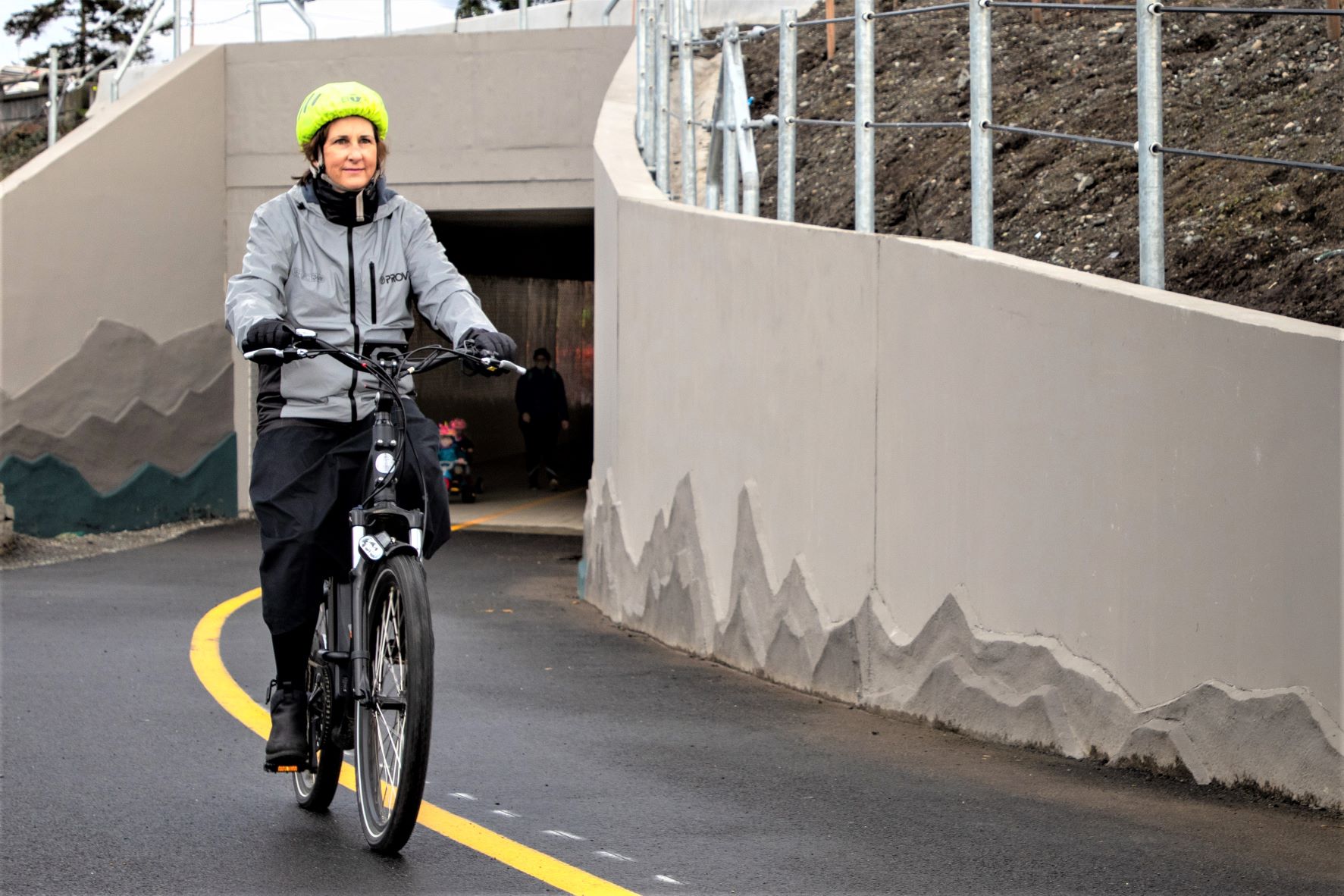 Connecting to the Palouse to Cascades Trail and Beyond

The Mountains to Sound Greenway Trail is the epicenter of the congressionally designated Mountains to Sound Greenway National Heritage Area that stretches 100 miles from Seattle to Ellensburg and includes 1.5 million acres along both sides of the Interstate 90 corridor. The Greenway encompasses forests, farms, historic sites, campgrounds, rivers, wildlife habitat, and many trails. 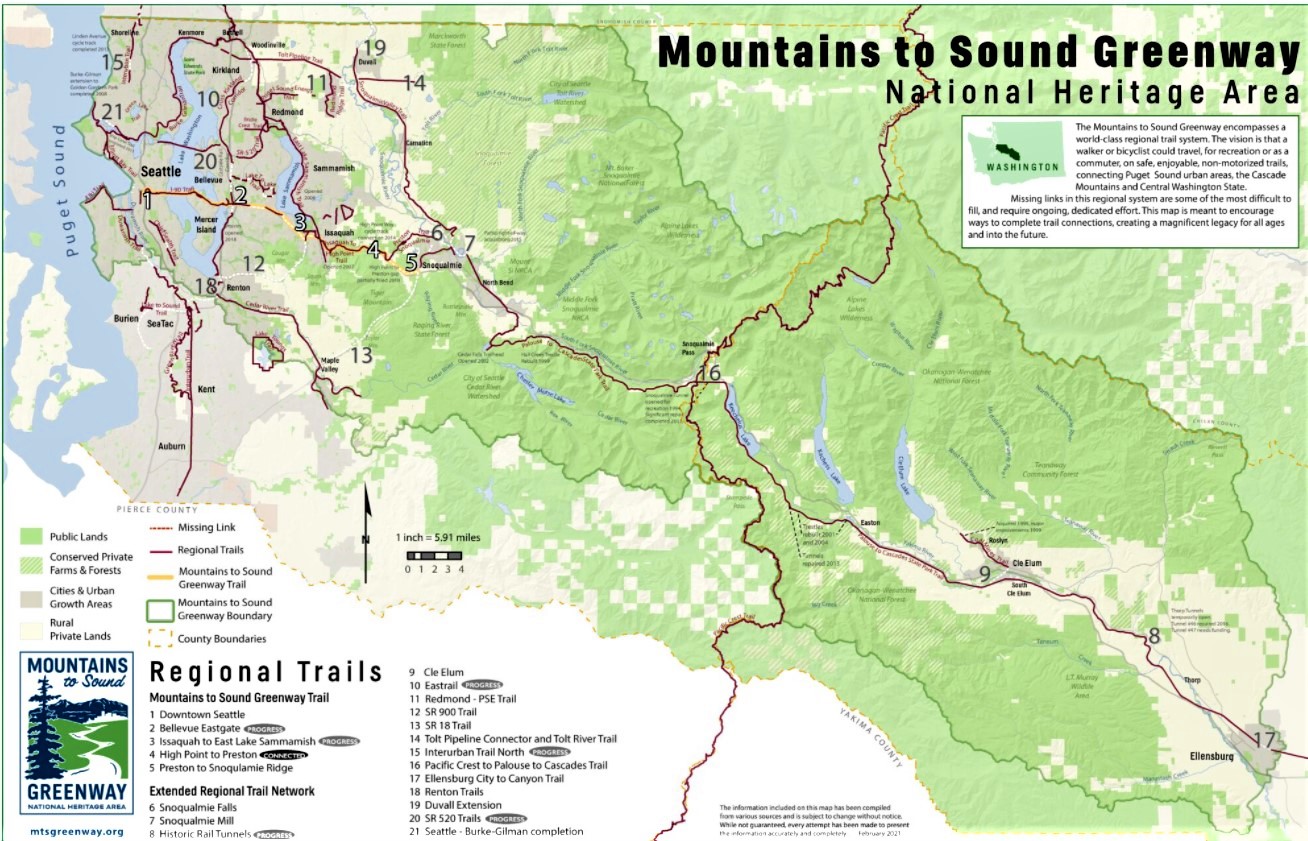 Bellevue officials are now pursuing federal and state funds to build another 2.4 miles of trail that would extend the east-west Mountains to Sound Greenway Trail to Issaquah. From there, Issaquah officials are working on a plan to extend the trail through the city to connect with the Issaquah-Preston Trail that leads into Preston.

The eventual goal is to build a trail segment between Preston and Snoqualmie and onward to North Bend, allowing people on bikes to connect with the 290-mile Palouse to Cascades State Park Trail that extends all the way to Idaho.

Combined with the 42-mile Eastrail trail that is under construction between Renton and Woodinville, the Mountains to Sound Greenway Trail is an arterial for bikes that will one day enable people to travel car-free over great distances throughout the Puget Sound Region and beyond. The Mountains to Sound Greenway and the Palouse to Cascades trails have been selected to be part of the Great American Rail-Trail, a cross-country route under development that runs through 12 states from Washington, D.C. to Washington state. 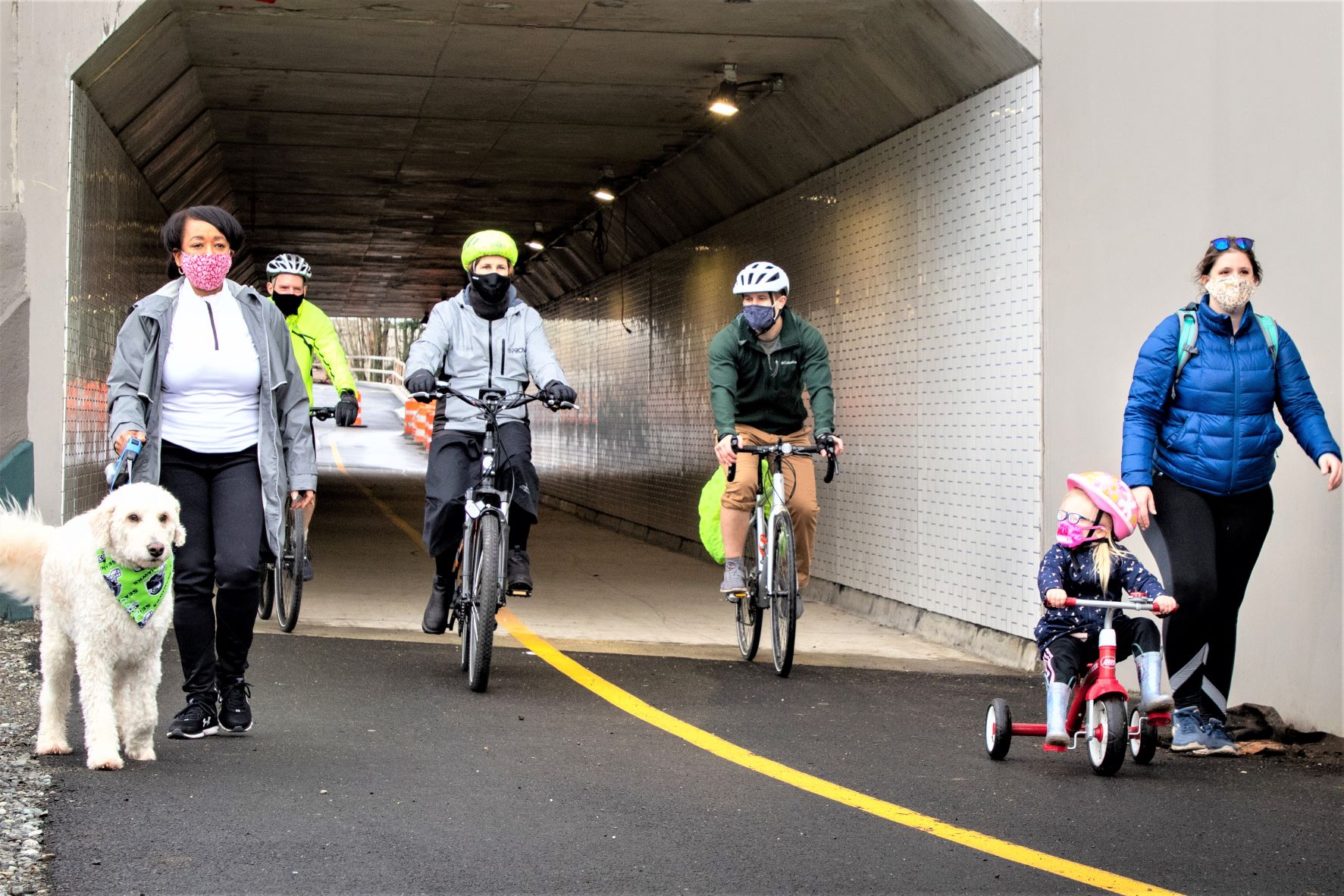 “We support the Mountains to Sound Greenway Trust and salute their efforts to fill in missing links along the Mountain to Sound Greenway Trail to enable more people to safely bike, walk, and roll throughout our region for transportation, and to connect to adventures and recreational opportunities without having to get into a car,” says Vicky Clarke, Cascade’s policy director.