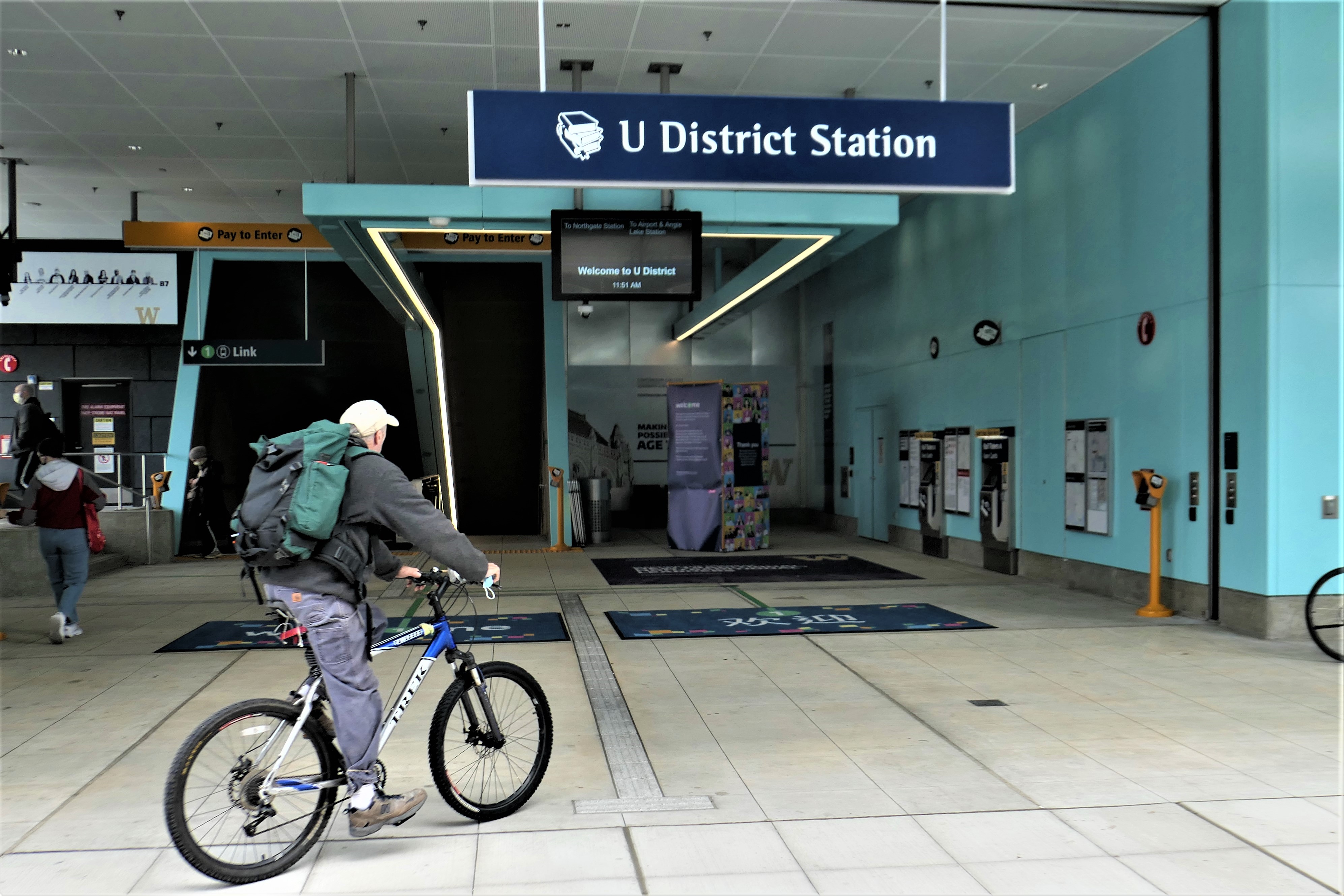 Bringing your bike onto the light rail is a great way to extend your range. By pedaling to a light rail station, taking a train, and then resuming your bike ride you can go farther faster and leave the car at home.

To celebrate Ride Transit Month in June, we pedaled to the new University District, Roosevelt, and Northgate light rail stations to check out their bike facilities. We also boarded a few trains with our bike to test out how easy or hard it is to get from street level to the trains.

The Seattle Department of Transportation has added new or improved bike lanes on streets surrounding the stations to make them safer and more convenient for people on bikes.

For folks who want to pedal to one of the stations and lock up their bike, the new stations operated by Sound Transit offer enclosed bike lockers and bike cages for rent, plus free covered bike racks outside. 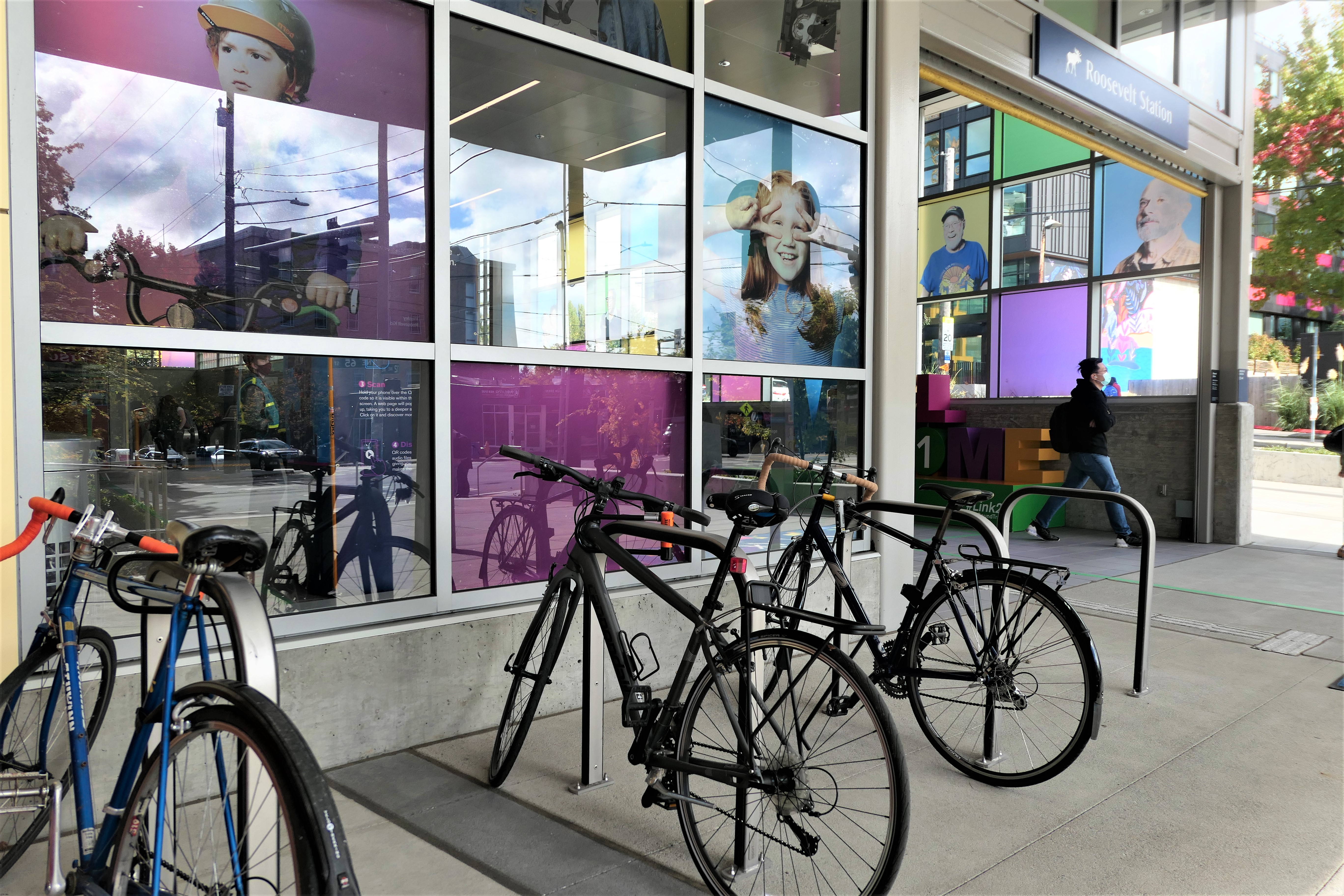 This station has bike lanes on two sides, covered free bike racks, and bike lockers and bike cages for rent. People can acquire a BikeLink card for hourly rentals of the cages and lockers at BikeLink.org. Sound Transit has created a page with resources for people riding bikes to their light rail stations, with a breakdown of bike lockers and cages at stations, plus information on how to get your bike onboard.

Thanks to the bike lanes on 11th and Roosevelt avenues, the north-south access to this station is fairly accessible by bike. There is no easy east-west connection to the Wallingford neighborhood, however, requiring people to ride on streets without bike lanes or to share sidewalks with pedestrians. 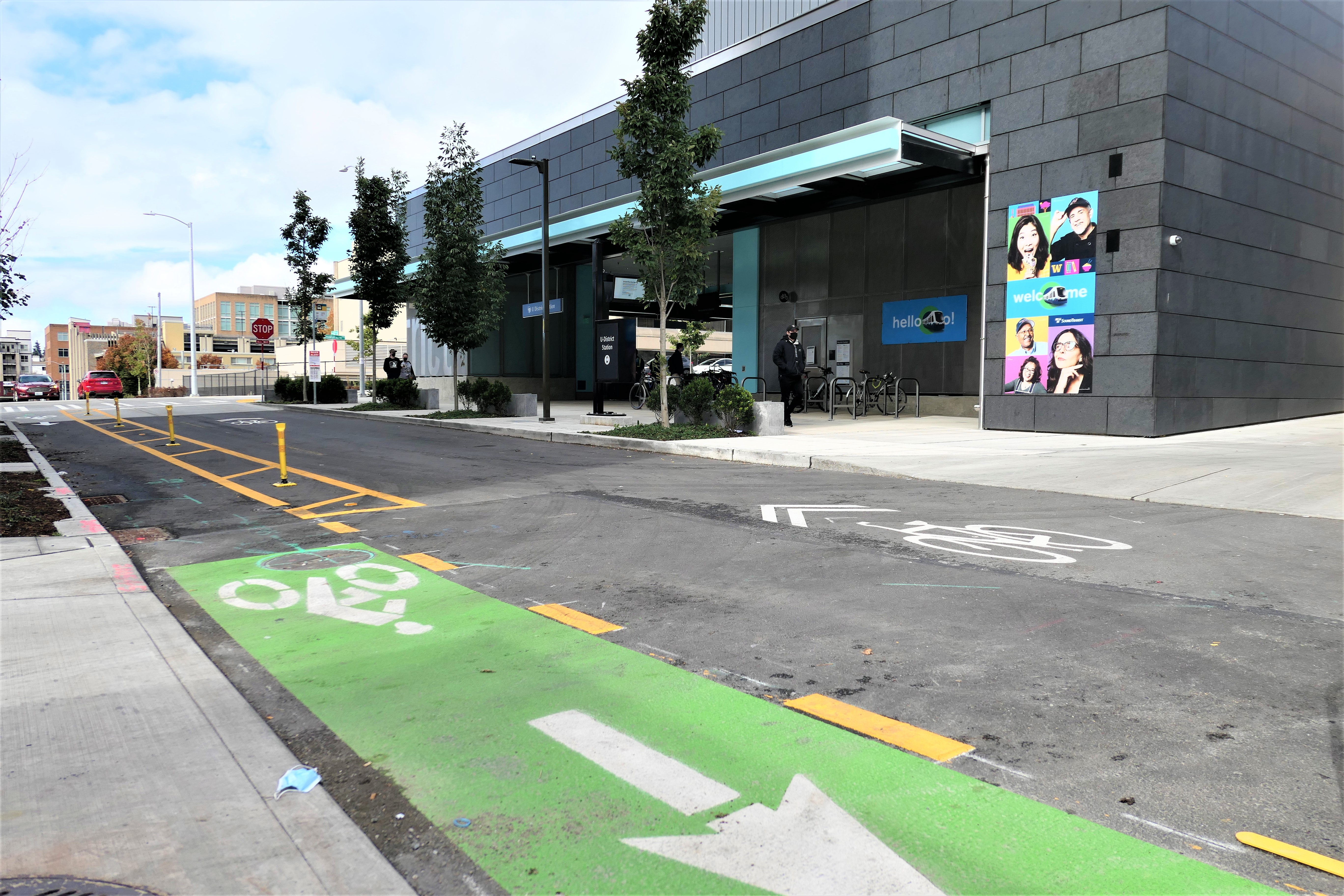 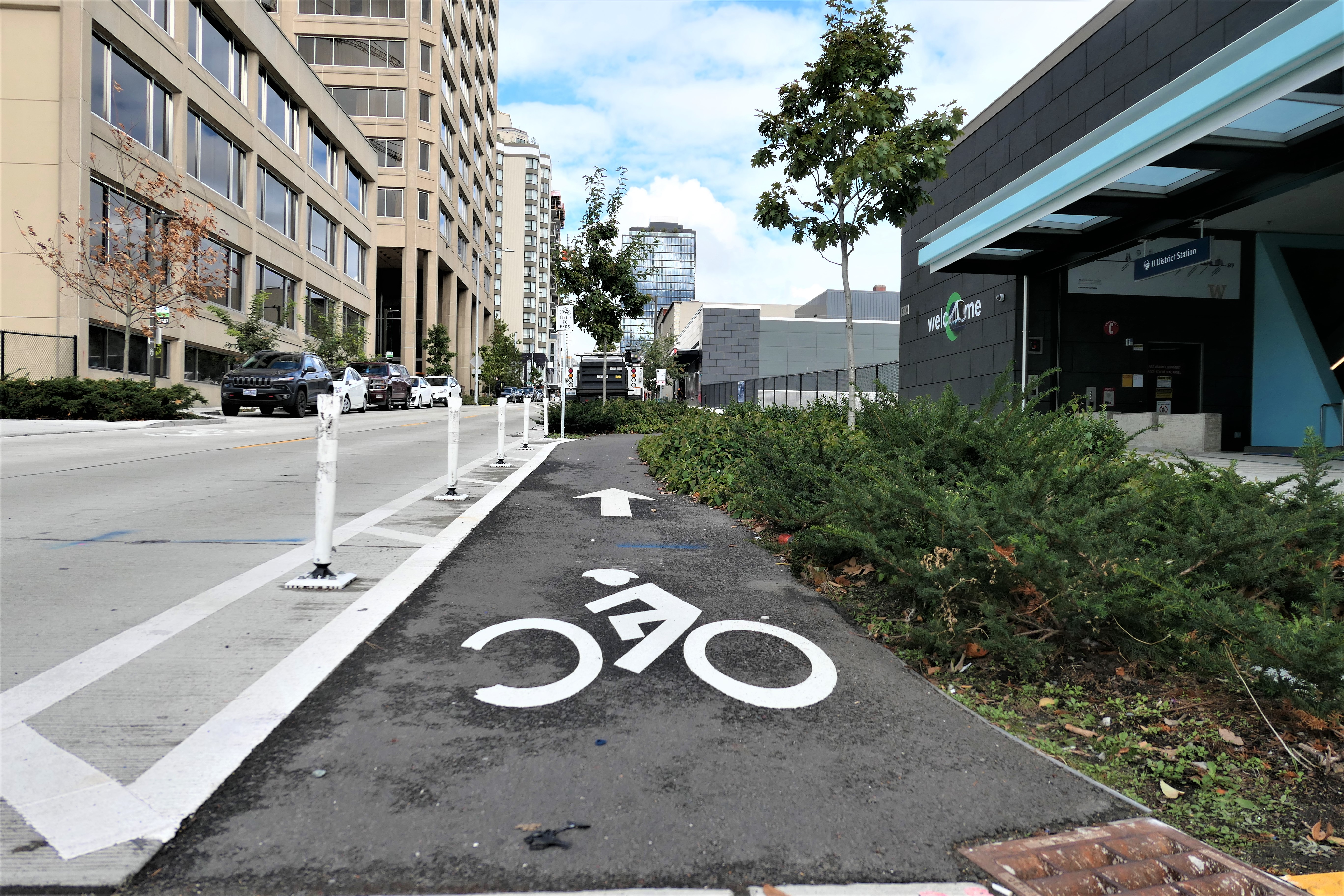 Bike lanes on two sides of the University District Station, above.

All three new stations have elevators, which are the easiest way for people with bikes to go up or down between the train platforms and street-level entrances and exits. All three stations also have escalators and staircases, but carrying a bike up or down them can be more difficult than using the elevators.

Down on the train platform, I met an individual taking his electric bike downtown. He was pleased that the new stations would make it easier to extend his range, especially on rainy days, by using light rail for a portion of his journey. 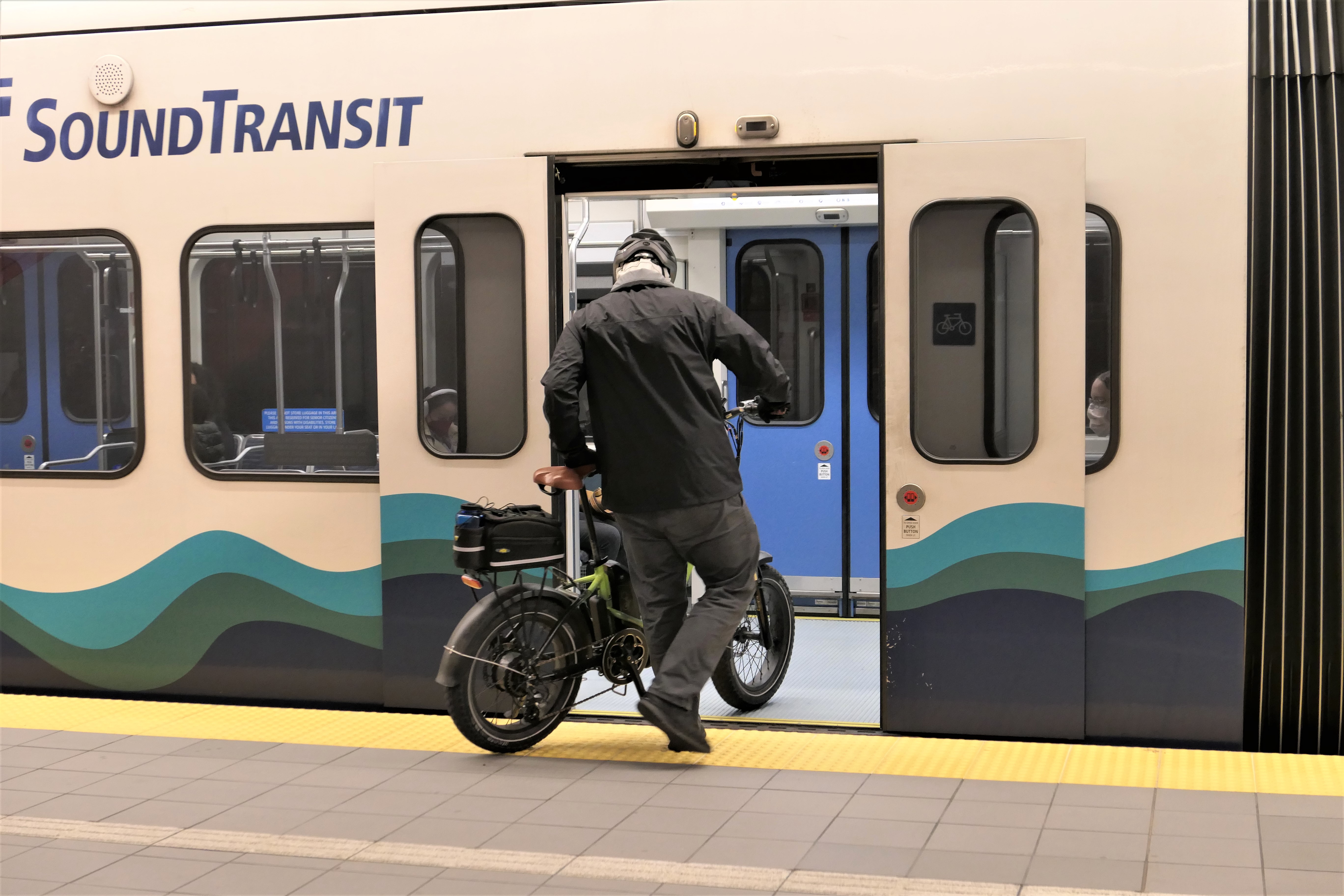 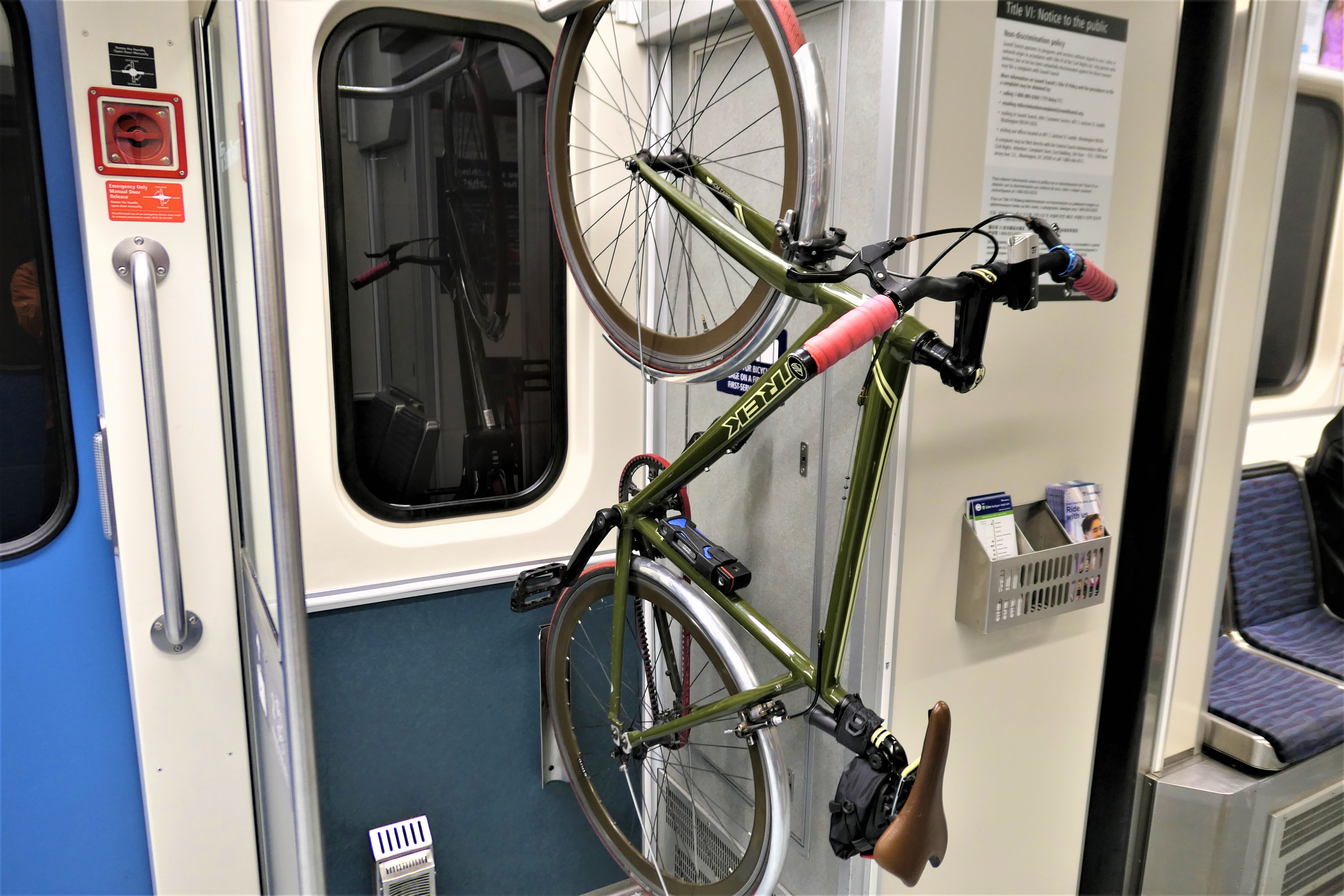 People with light bikes can hang them up on the trains.

Boarding the train, I hung my bike on a hook in the luggage storage area and took the short ride to Roosevelt Station.

The University District station and Roosevelt Stations are served by trains running below ground--just like the Capitol Hill and downtown stations. This makes for a noticeably faster ride than the rail sections between SODO and Seattle-Tacoma International Airport, where trains run parallel to the road and must stop for vehicle traffic.

Disembarking from the train, I opted to use the stairs rather than the elevator so I could test out the bike runnels. Bike runnels are an essential component of any bicycle stairway, consisting of channels that allow someone to push a bike up a stairway, and are common in Europe. Unfortunately, the metal runnels installed by Sound Transit are too narrow for bikes with wide tires. Located beneath the handrail, the runnels are also impractical for bikes with panniers, which rub on the wall. 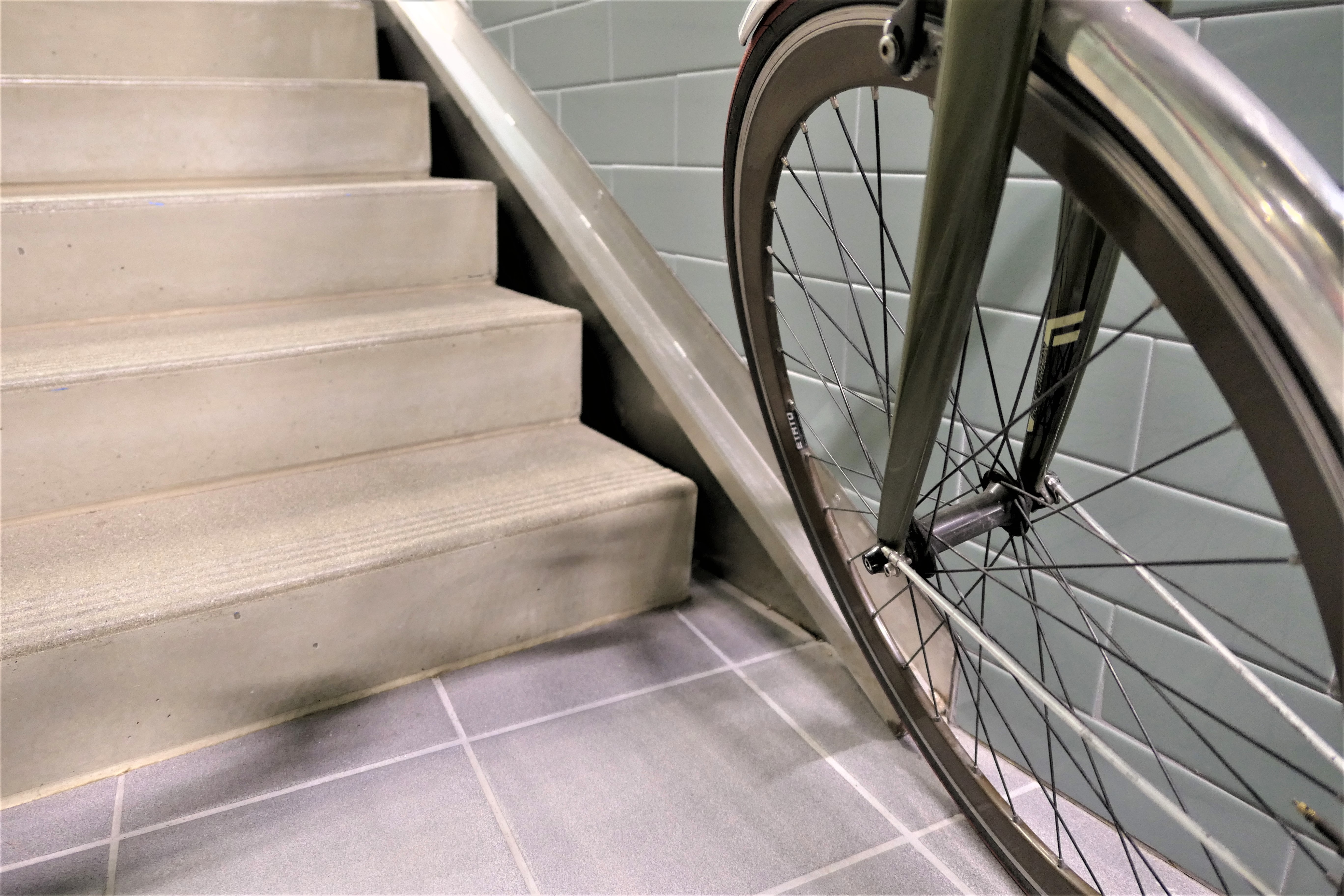 As my bike is light, I carried it on my shoulder up the staircase. This is not an option for many people, however, which leaves the elevators as the best choice. 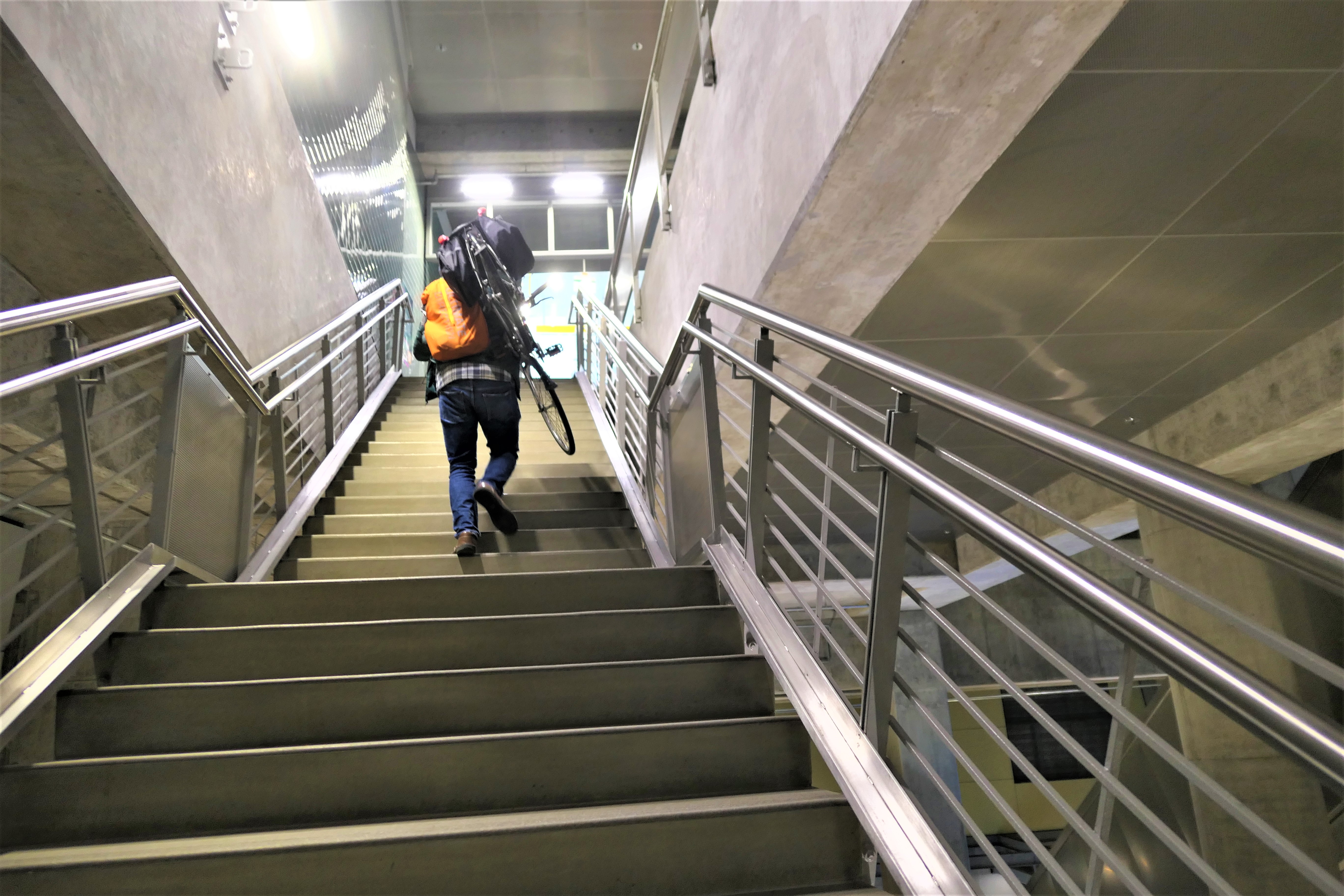 The bike runnels on the sides of the staircase are impractical for bikes with larger tires.

Located near Roosevelt High School, Roosevelt Station’s entrance is on 12th Avenue, a one-way street with a one-way striped bike lane heading north. Nearby Roosevelt Avenue, the southbound street one block from 12th, has a bike lane that is protected in areas, unprotected in others. Other nearby streets with bike lanes include 65th and 70th avenues, as well as NE Ravenna Boulevard. 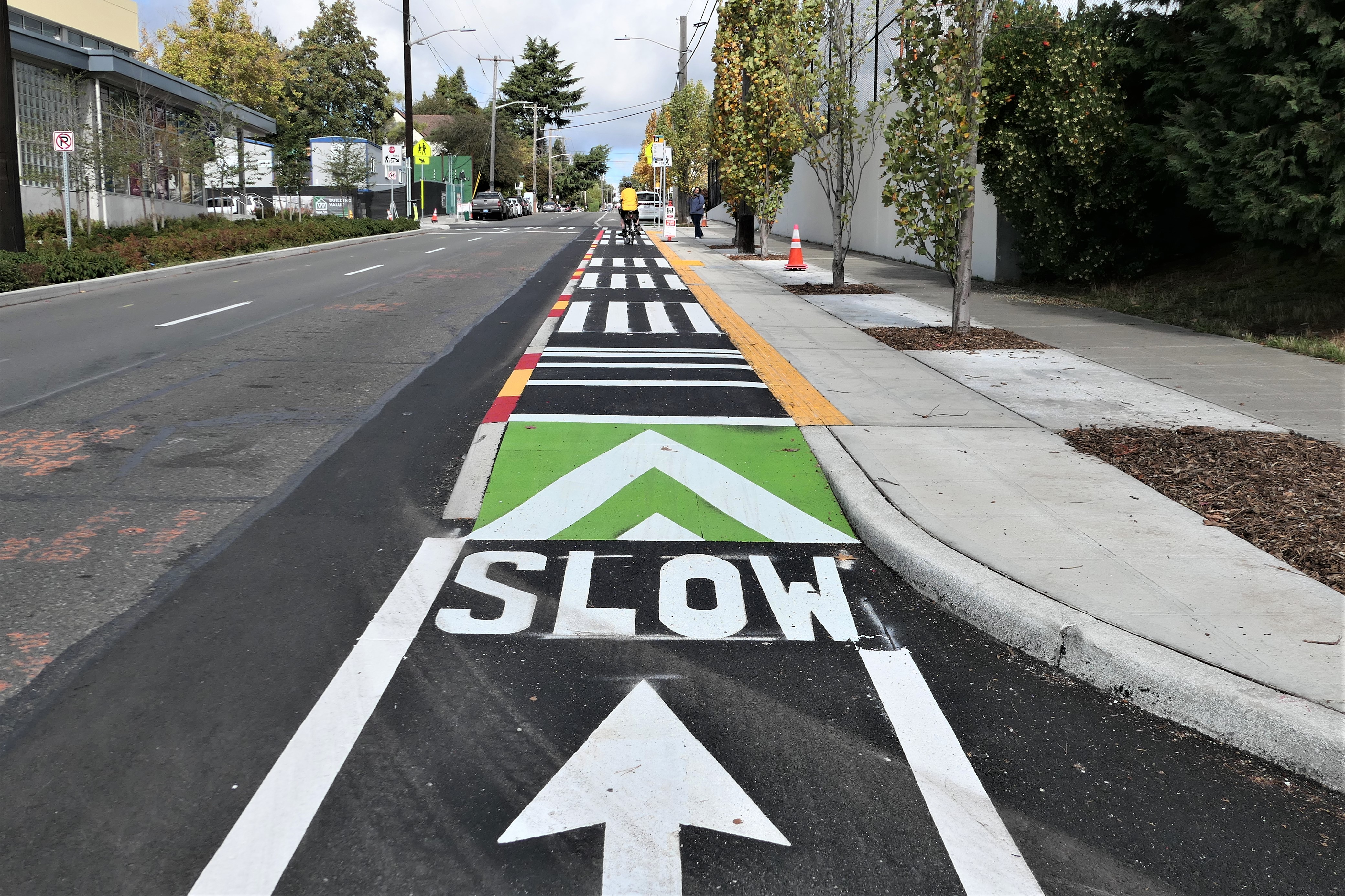 Re-entering the station, I boarded the elevator down to the train platform and rode the train to Northgate Station, currently the most northerly station, where a new bike and pedestrian bridge has been built over Interstate 5. 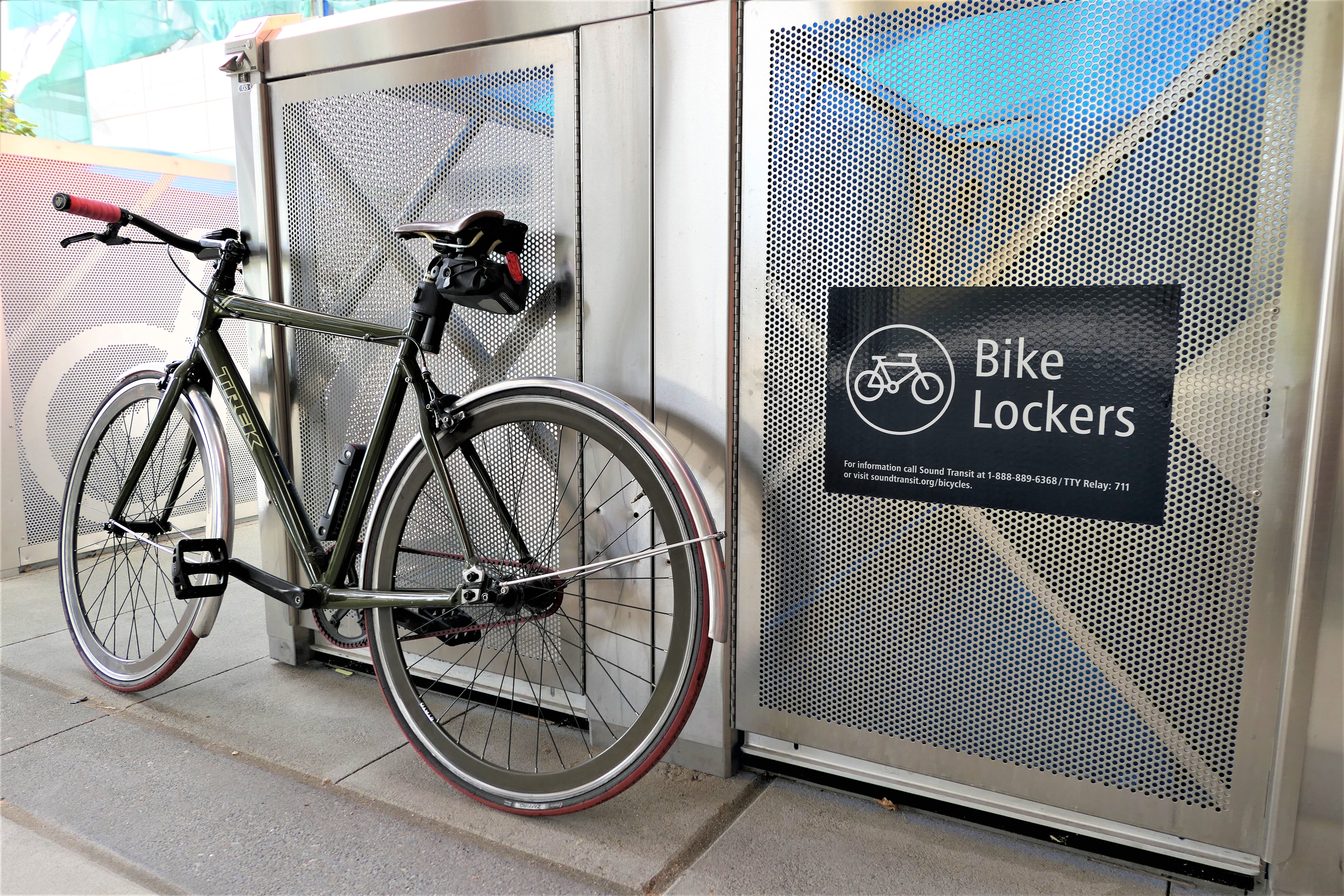 Thanks to this station, North Seattle (and even Shoreline) residents who travel downtown for work now have the option of pedaling to the station and using light rail for a portion of their journey.

Disembarking from the train, which runs on elevated tracks several stories above street level, I took the elevator down to access the bike and pedestrian bridge. Named for the late U.S. Rep. John Lewis, a civil rights icon, this bridge re-connects the Maple Leaf and North College Park neighborhoods that were severed decades ago by Interstate 5. 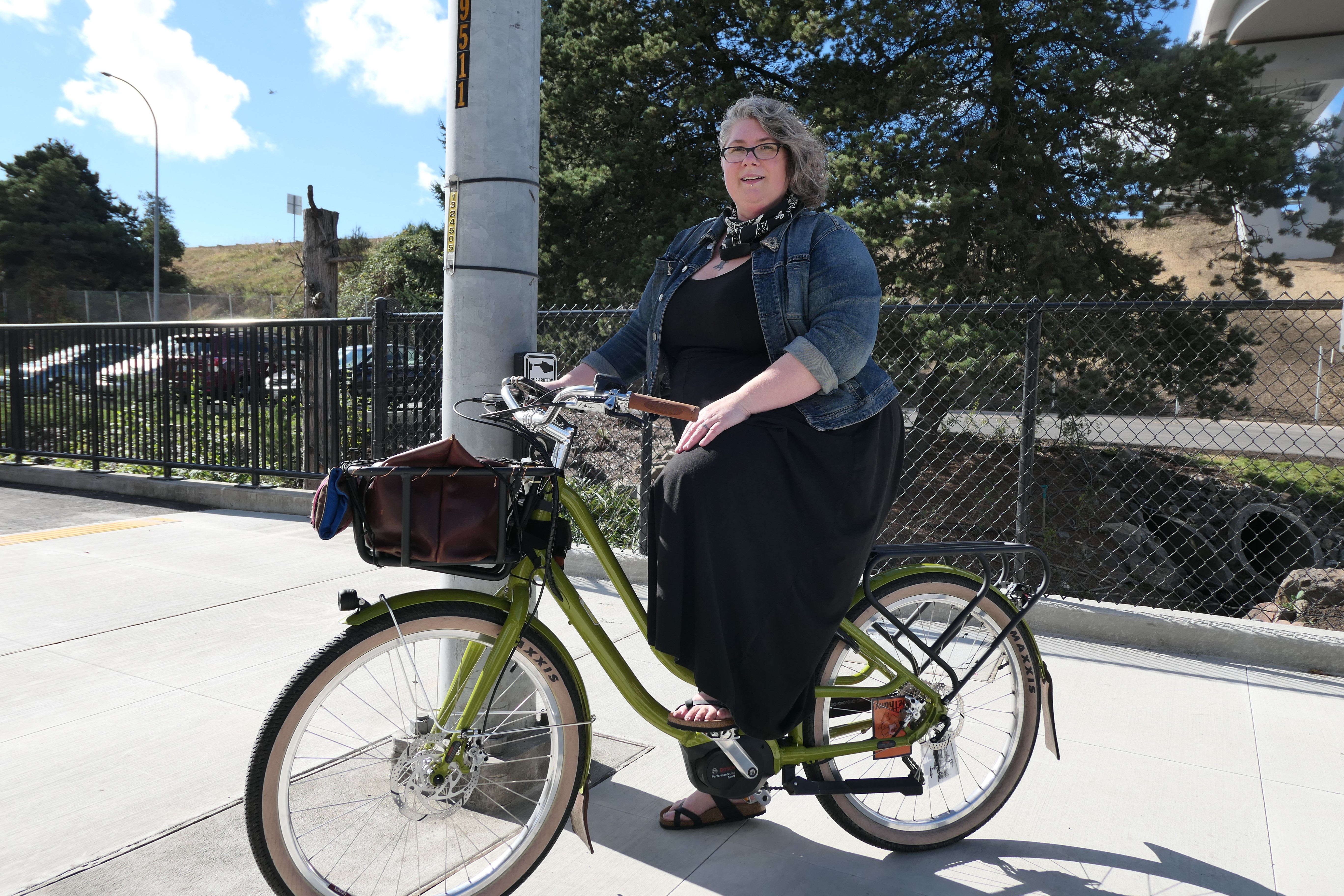 On the western side of the bridge is North Seattle College, where bike lanes separated from traffic with flexible bollards in certain sections run north and south along College Way. On the eastern side of the bridge is Northgate Station, the Northgate Mall, and many retail and housing developments. In addition to making it easier for college students to access the light rail, the bridge makes it safer and easier for more people to ride bikes to businesses and homes previously divided by the highway.

Pedaling over the bridge, I encountered a mother teaching her young son to ride on his balance bike. It was the perfect image of how safe and accomodating the new bridge is for people of all abilities. 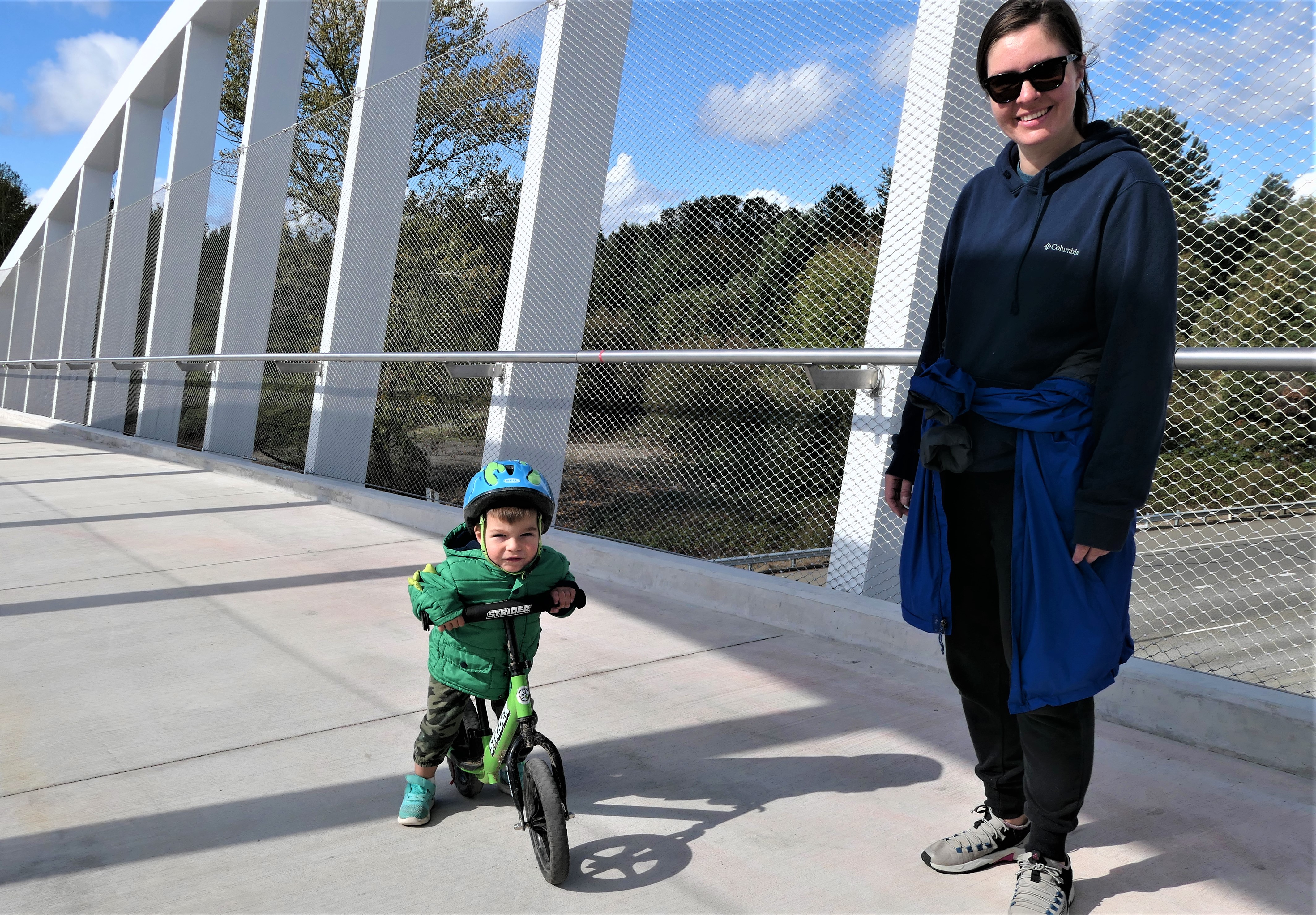 The city has built a separated two-way bike path along 1st Avenue, across the street from Northgate Station. Here, I spoke with a woman on an electric bike waiting to cross one of the new crosswalks. She was pleased with the new bike infrastructure, which she said has made riding around the Northgate neighborhood more enjoyable. 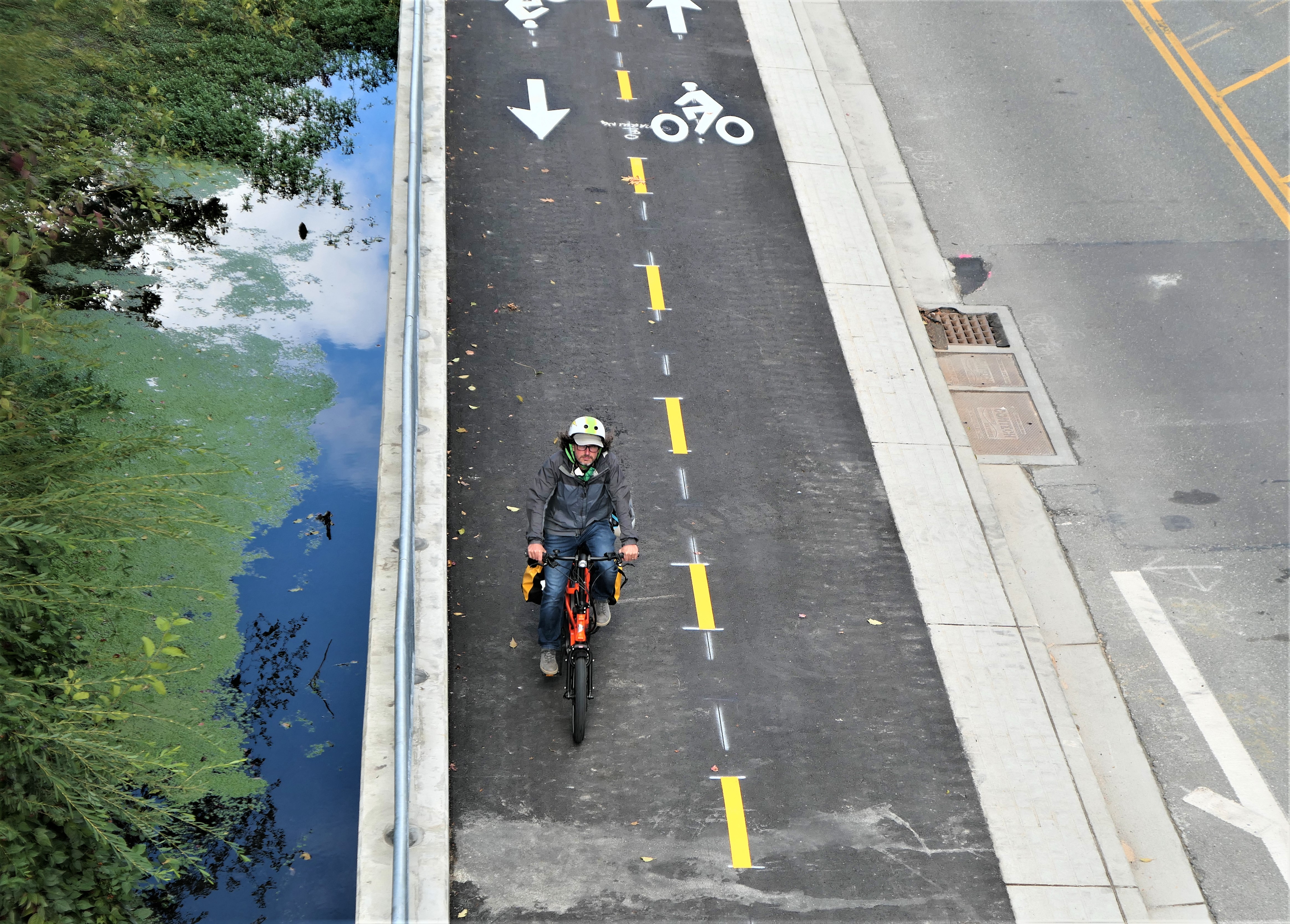 The 1st Ave protected bike lanes extend southward for several blocks, and in the future they will extend northward to Northgate Way. 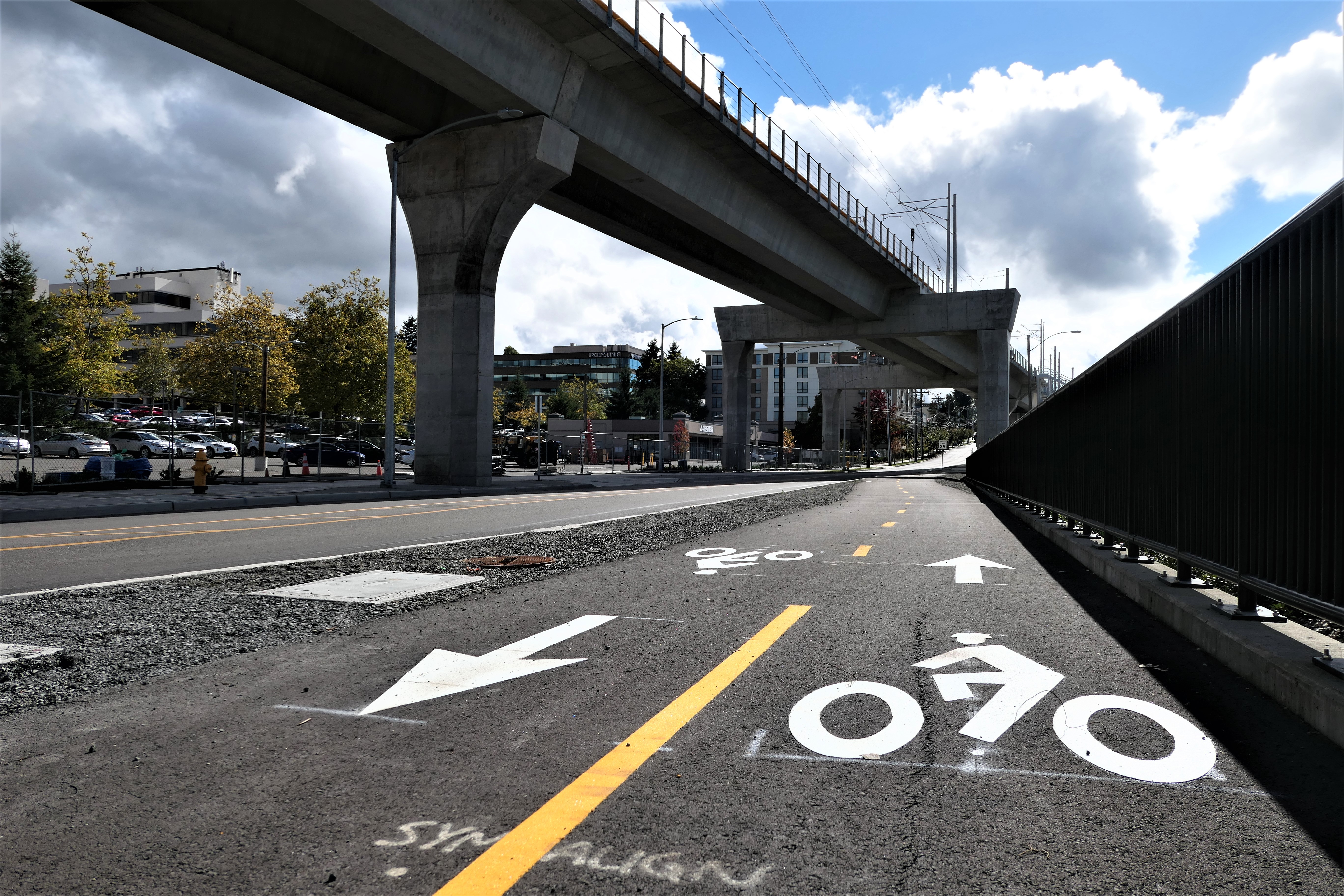 I pedaled southward to the end of the 1st Ave separated bike lanes and connected with a neighborhood greenway street to make my southbound journey back home, connecting with 5th Ave to use a segment with a painted bike lane, and then Roosevelt Ave, which has both protected and unprotected stretches of bike lane. 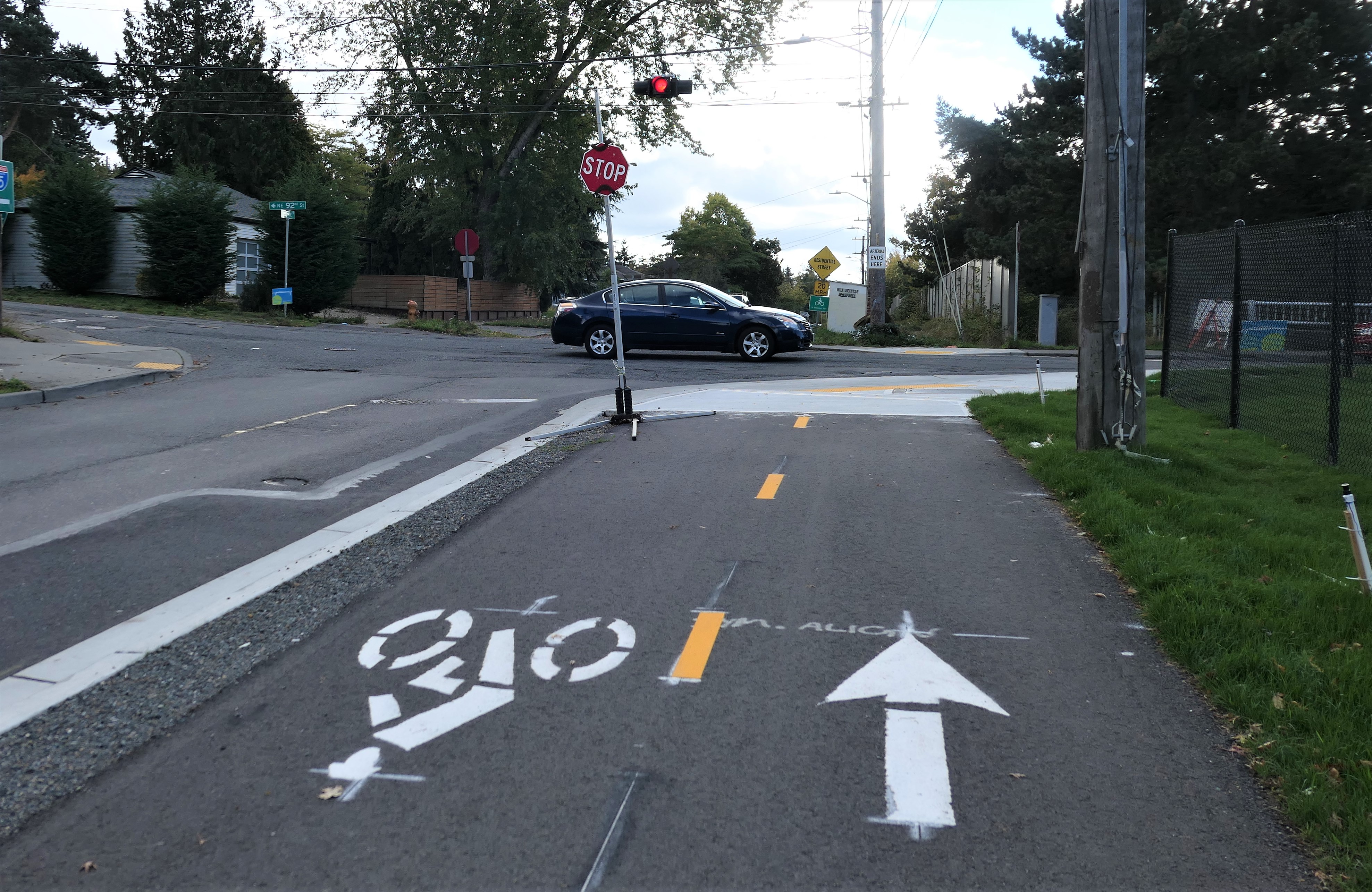 Though the Northgate station still has gaps to fully connect people on bikes via protected lanes to the light rail, the new stations and their bike infrastructure is a big improvement. But much more work remains to build the safe and connected bike networks that enable more people to safely and easily ride their bikes to and from light rail and beyond.

“Biking and transit go together like peanut butter and jelly. Seattle has been planning for these light rail stations for years, and biking around the immediate station areas, it really shows. Upgrades like the NE 65th St Vision Zero project created protected bike lanes that connect people safely from transit to work, shops and home” said Vicky Clarke, Cascade’s policy director.

“But there’s more to do to make sure people on bikes can get where they are going safely all across the city, whether transit is a part of the trip or not. In particular there are gaps to close in the bike network around the Northgate station, and many pressing safety needs in South Seattle,” Clarke said. “That’s why Cascade continues to advocate for a completion of the Bike Master Plan--including safe routes in Beacon Hill, Georgetown, and West Seattle--that ensure safety for all road users, especially in historically underserved areas.”