From Paralympic Racing to Recreational Riding, Handcycles Provide People of All Abilities the Freedom to Pedal | Cascade Bicycle Club
Skip to main content

From Paralympic Racing to Recreational Riding, Handcycles Provide People of All Abilities the Freedom to Pedal

Tom Ahearne and his recumbent handcycle are a familiar sight to residents of Bainbridge Island, where the prominent attorney pedals the roads near his home several times per week.

“Most people have gotten used to watching out for my trike on the road,” says Ahearne, who flies a bright green flag to ensure people driving cars see him. The rides help Ahearne, who was paralyzed from the waist down in a snowboarding accident, remain fit and stay off painkillers.

Ahearne recently completed Cascade’s 33-mile Chilly Hilly ride on his handbike for the first time. A longtime Bainbridge Island resident, he had seen Chilly Hilly riders participating in the event many times. But it wasn’t until the event date was changed to August from February this year that he decided to register.

“My physical therapist pushed me to sign up and I’m very happy that I did it,” says Ahearne, 62, who is married with two children. “Everyone was very encouraging and friendly.” 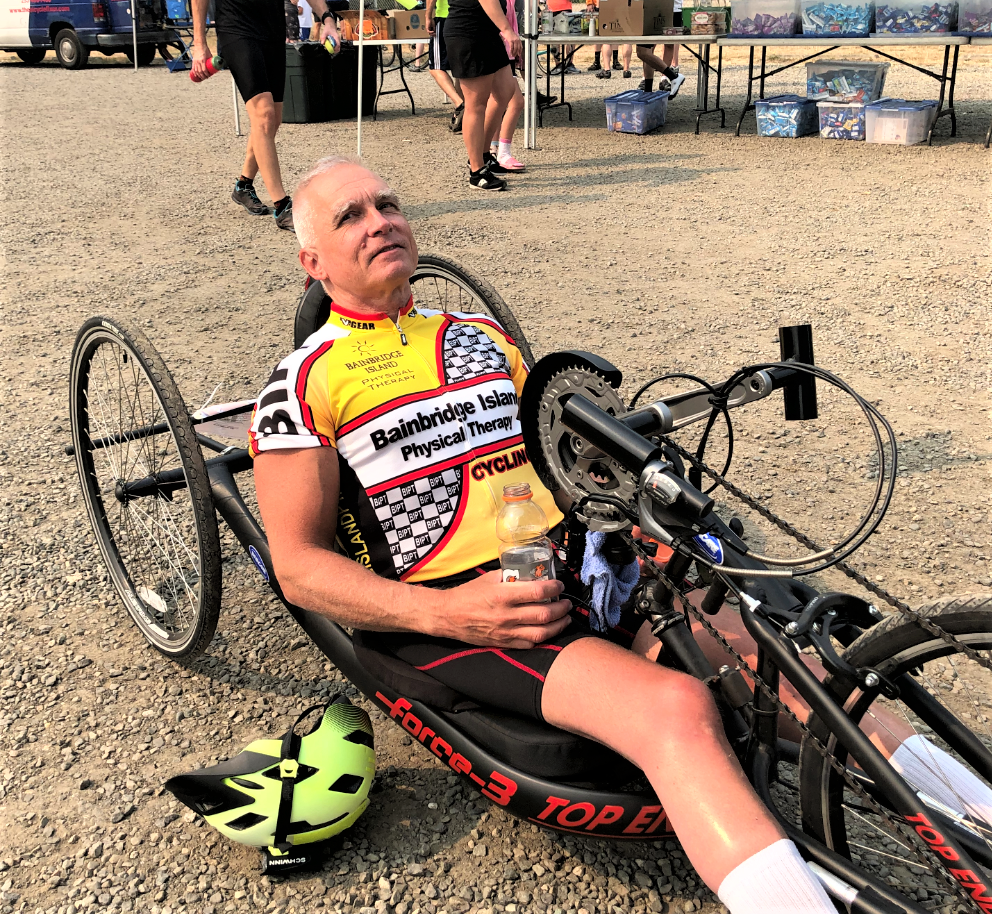 Handbikes, also known as handcycles or hand-crank bikes, are an increasingly popular way for individuals with spinal injuries and physical differences to ride and race. Handcycle racing is a high-level sport featured in the Paralympics, which begin today in Tokyo.

People interested in watching the world’s fastest handcycle racers can tune in to NBCSN to watch the Paralympic track cycling events that begin tomorrow, Wednesday, and continue through Saturday (Aug. 25-28). Next week, paralympians will compete in the road cycling events from Tuesday through Friday (Aug. 31 to Sept. 3). Both track and road hand cycling events are listed on the NBCSN Paralympic Games TV schedule.

“It should be really exciting to watch,” says Ken Bestine, a handcycle racer pictured atop this post who covers the sport on his blog, USA Hand Bike Circuit.

Ahearne took up hand cycling five years ago at the urging of friends and family. Before his injury, Ahearne was a self-professed “gym rat” and athlete who enjoyed snowboarding and other sports. But he had never identified as a bicyclist and had not ridden a bike in many years. Now, he rides 12 miles on Bainbridge two to three times per week.

The regular exercise and outdoor time are good for his body and mind, says Ahearne, an appellate lawyer who specializes in constitutional law. He successfully argued a state Supreme Court case that required Washington state to increase its public school funding.

“Professionally as a lawyer, he is famous for being tenacious,” says Keith Heinzelman, Ahearne’s physical therapist. “The same thing can be said about his athletic pursuits. He powers through.”

Tenacity is important when riding a handcycle. “Doing 25 miles on a handbike is like riding 50 or 60 on a regular bike,” says Heinzelman, a doctor at Bainbridge Island Physical Therapy. “They are heavier and less efficient” than regular bikes. 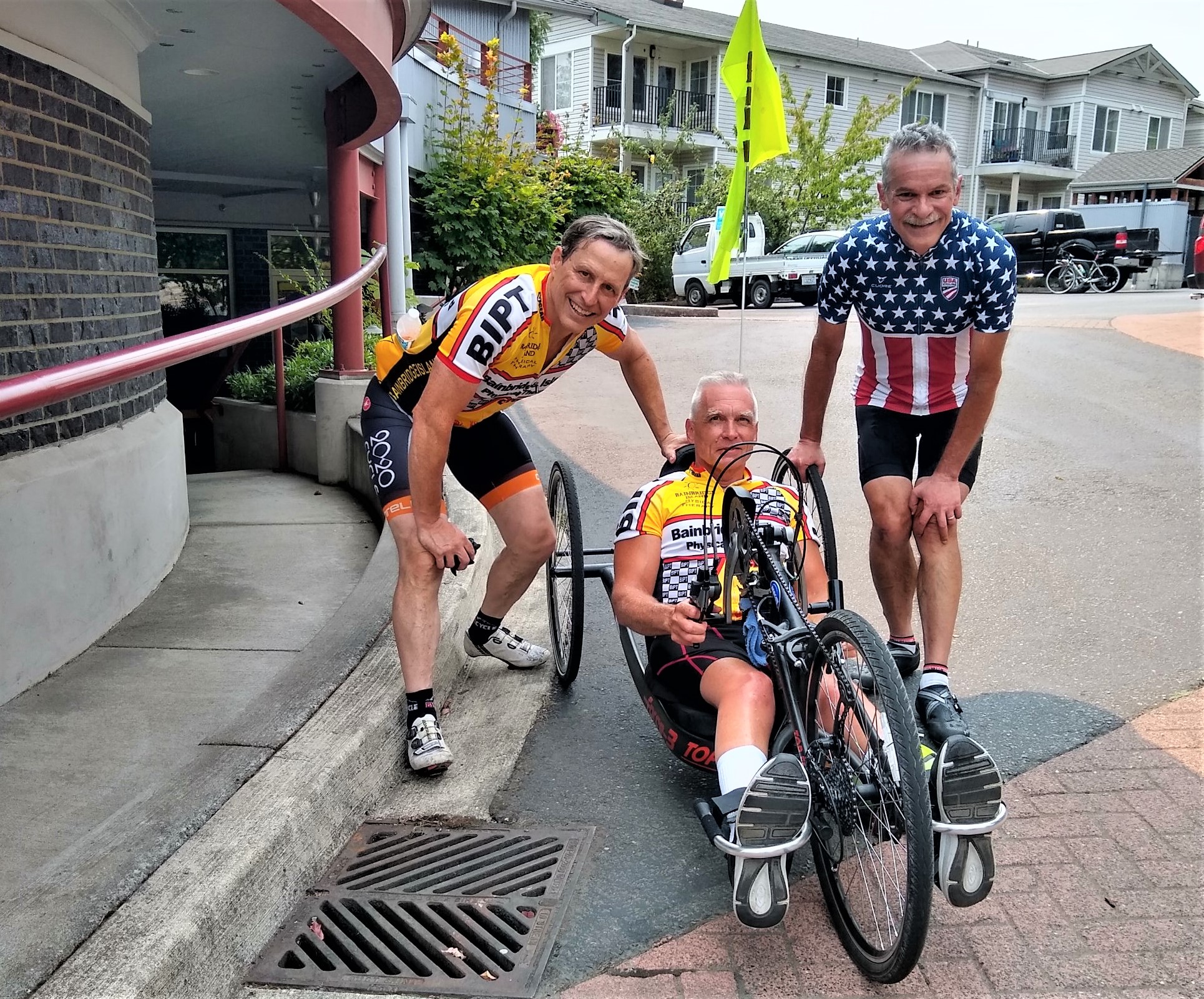 Ahearne entered Chilly Hilly at the encouragement of his physical therapist, pictured on the left.

Ahearne rides a Force 3 aluminum trike that weighs about 40 pounds. A regular road bike can weigh 20 pounds or less. It is also difficult to generate the same amount of power with the upper body as with the legs and lower body. Hills are a challenge due to the weight distribution of a handbike, whose drivetrain powers the front wheel rather than the rear wheel. Handcyclists also can’t stand up to get that boost of power that helps people on bicycles stomp up a steep grade.

“There is less traction. Going up a wet hill that has moss or wet leaves on it, the front wheel sometimes slips,” says Ahearne, who pre-rode some of the steeper hills on the Chilly Hilly route to make sure his handbike could climb them.

Ahearne is quick to joke about his pace, which he says is about 10 miles per hour. “Everyone was passing me on the hills during Chilly Hilly. My grandmother with her walker could likely pass me going uphill.”

Despite his slower pace, Ahearne enjoys pushing himself. His physical therapist is encouraging him to ride Cascade’s 206-mile STP next year.

For inspiration, Ahearne can look to the paralympians and other handbike racers.

Racing and Riding to Recover from a Crash

Bestine took up handbike racing after his legs were paralyzed following a motorcycle crash. He was previously a recreational bicyclist and weekend racer, but after losing the use of his legs Bestine fell into a deep depression and remained on painkillers and antidepressant drugs for about two years. “It took a lot of coaxing to get me out of my rut,” says Bestine, who lives in Pennsylvania. “I finally came to the realization that the world and life were passing me by.”

Bestine bought a handcycle in 2006 and began racing in 2007. He competes in masters class events and rides between 200 and 250 miles per week. He founded the blog USAHandBikeCircuit.com to spread interest in handbike racing, also called paracycling.

Bestine says the Paralympics transformed the sport and the technology of handbikes. When handcycling became an official Paralympic sport, “the need for speed ramped up. We went from heavy aluminum bikes to lightweight carbon fiber.” 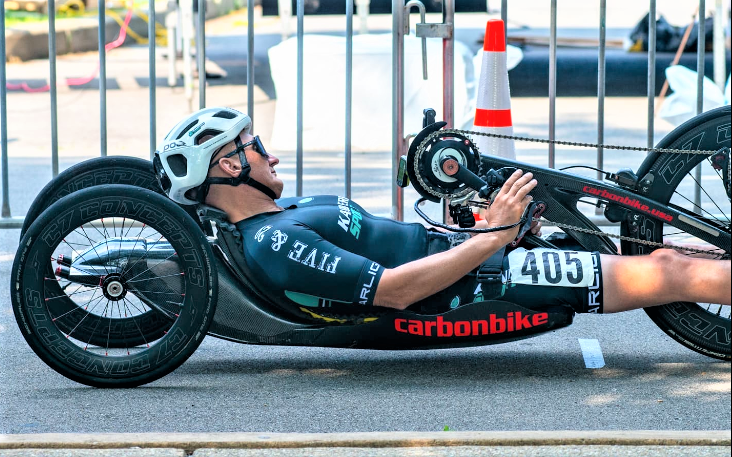 Bestine on his carbon fiber handbike.

In Paralympic cycling, competitors are divided into different categories based on their disability. Amputees are in a different race category than individuals with severe spinal injuries. Along with the road and track racing events, Bestine is excited to see the Paralympic Team Relay event, where three people with different injury classifications comprise each team.

Back on Bainbridge Island, Ahearne is eager to pedal in more Cascade events. Always quick to crack a joke, he said the hardest part of Chilly Hilly was seeing the large calf muscles on all the riders on traditional bikes. “My head is right at the level of people’s legs,” he quips. 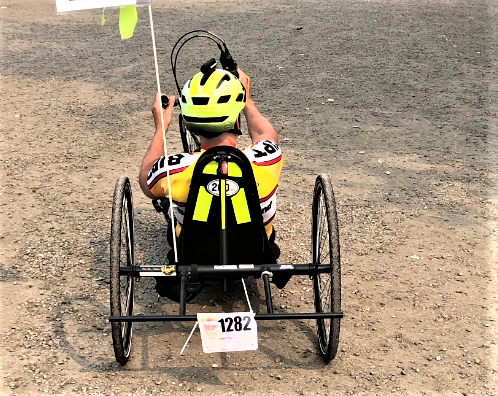 Ahearne pedals out following a food stop during Chilly Hilly.