Pausing for a photo at Frog Rock, a Bainbridge Island landmark consisting of two boulders painted to resemble a giant frog, is one of the many fun traditions for participants in Cascade’s Chilly Hilly ride.

Created in 1971, Frog Rock is more than a silly roadside attraction. It is an homage to the island’s abundant amphibians.

Islanders refer to Bainbridge as Frog Rock “because the mating chorus of Pacific Tree Frogs fills the air in late winter and early spring,” says B.Sue Johnson, a Cascade outrider, and Bainbridge resident since 1985. 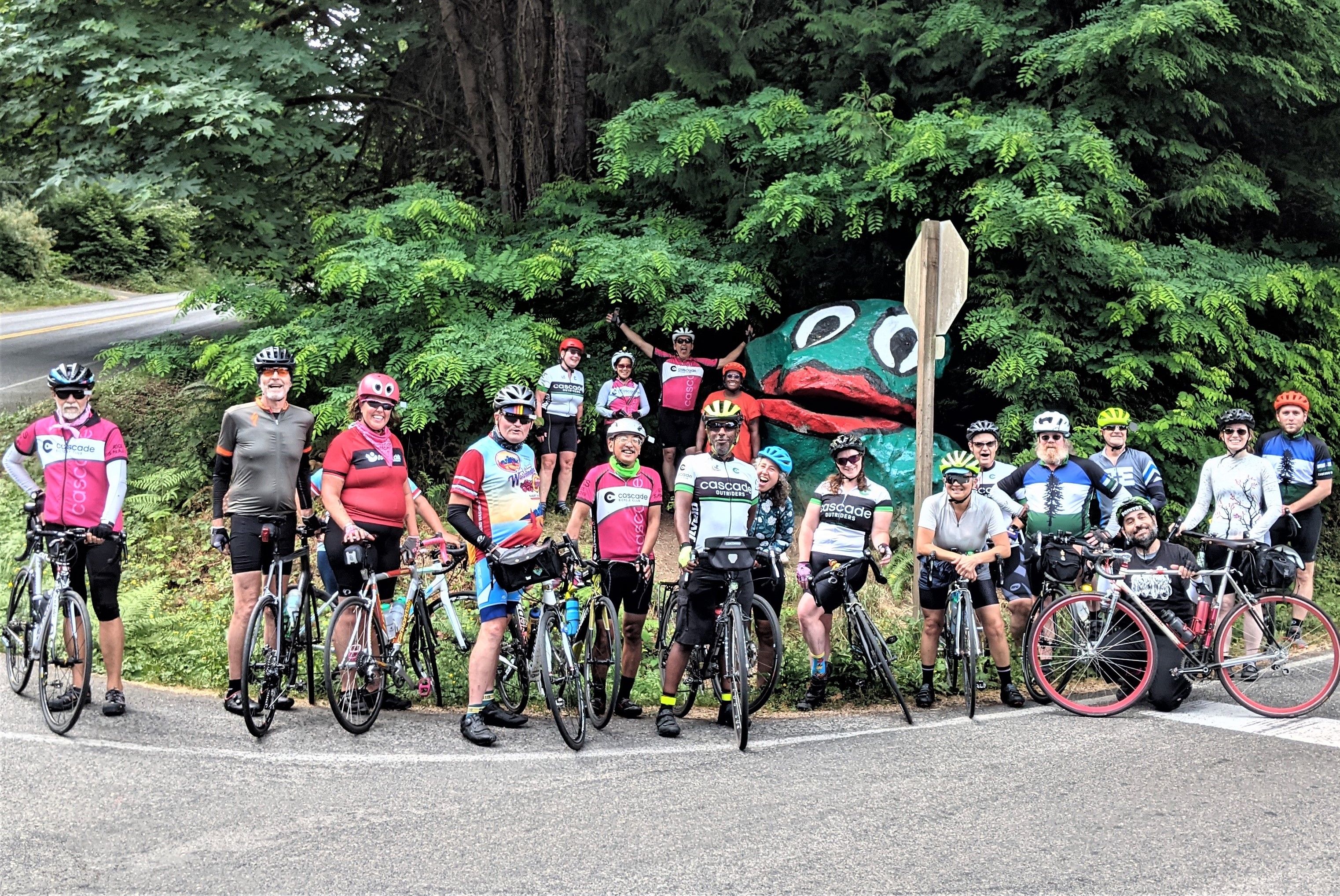 On Aug. 1, people can snap their own selfie at Frog Rock by registering to ride in the 49th edition of the Chilly Hilly. Covering 33 miles of the island’s hilly and scenic roads, Chilly Hilly “is a challenging ride packed into a lovely little package,” Johnson says.

Chilly Hilly is traditionally held on the last weekend in February to mark the beginning of Cascade’s major group rides and events season. Due to the pandemic, Cascade was unable to hold the event in February of 2021. But as the governor lifted COVID-19 restrictions thanks to the state’s vaccination rate, Cascade’s Events team hustled to organize and obtain permits for a summer edition of the Chilly Hilly. 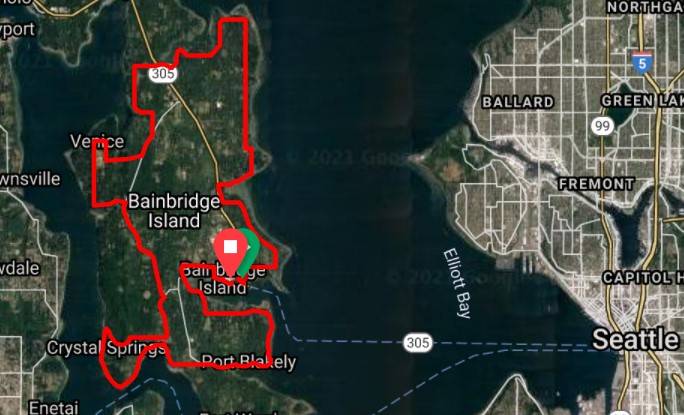 Rides and Community Engagement Director Dave Douglas says about 1,000 people had registered as of this writing, and he expected up to 1,500 participants on Aug. 1--making it the largest Cascade event since Chilly Hilly in February 2020. Registration closes this Friday, July 23, and there is no day-of-event registration, so sign up now.

Due to the date change, Cascade sent out a survey asking for a new unofficial name. Member Anna Marie Dowd suggested, “Still Hilly, Not Chilly,” which Cascade staff chose as the moniker for the summer ride, granting Dowd two free entry tickets as a reward.

A Beautiful Day for a Ride

On Saturday, July 17, about 30 Cascade staff and board members, ride leaders, outriders, and friends gathered to pre-ride the course. We met up on bikes at the Colman Dock in downtown Seattle and pedaled onto the ferry to Bainbridge Island. 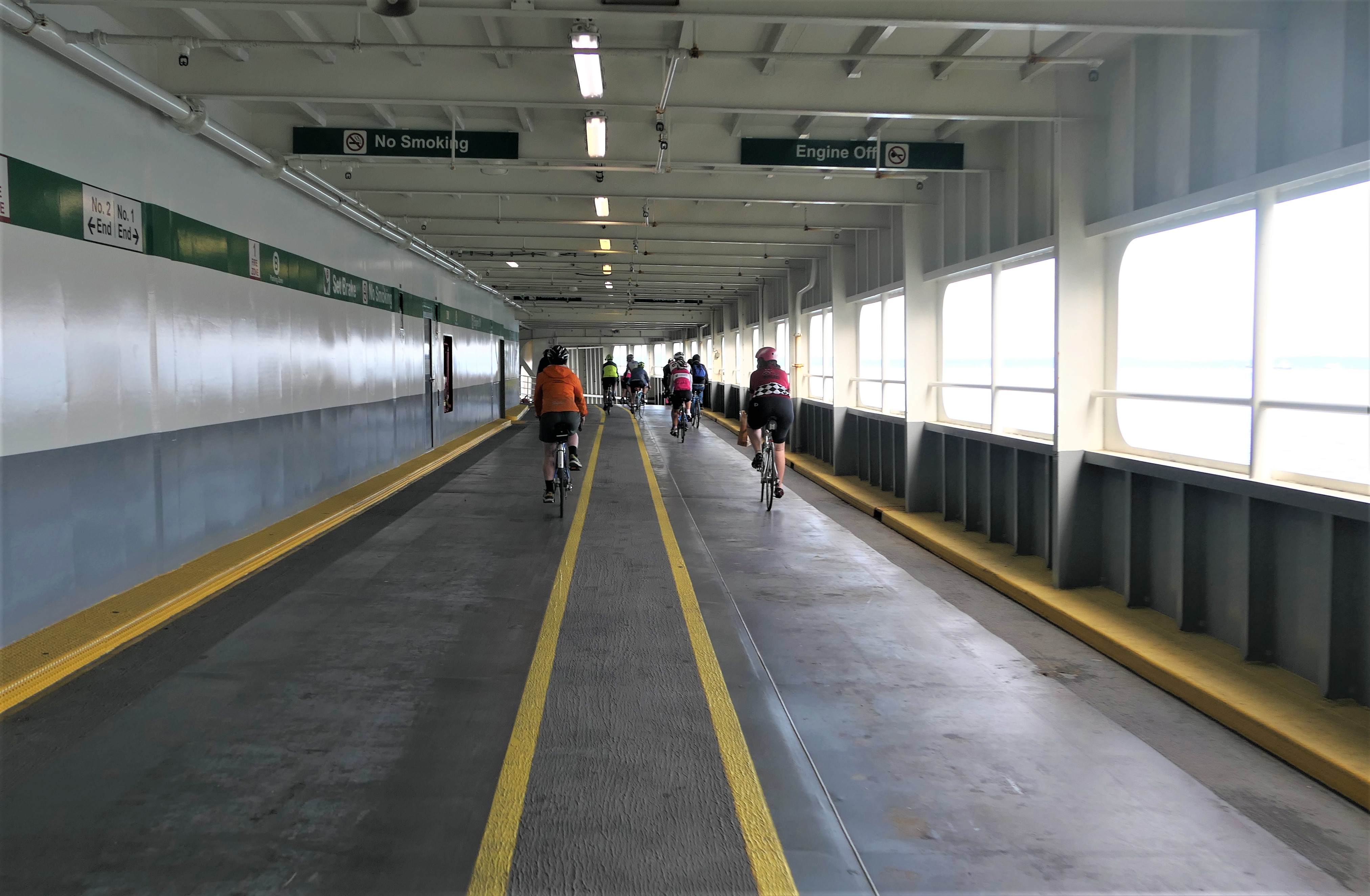 Bikes board and depart the ferry first, before the cars.

The ferry ride is free to Chilly Hilly participants, and it is one of the joys of the event--as well as an opportunity to hydrate, eat a snack, and enjoy the views of Puget Sound. Arriving in the town of Winslow, participants disembark from the ferry in a mass start to the ride.

During the pre-ride last Saturday, our group huddled up in Winslow to exchange hellos, and arrange several pace groups, before setting out together under sunny skies. The steep hills quickly separated our group into many smaller groups. 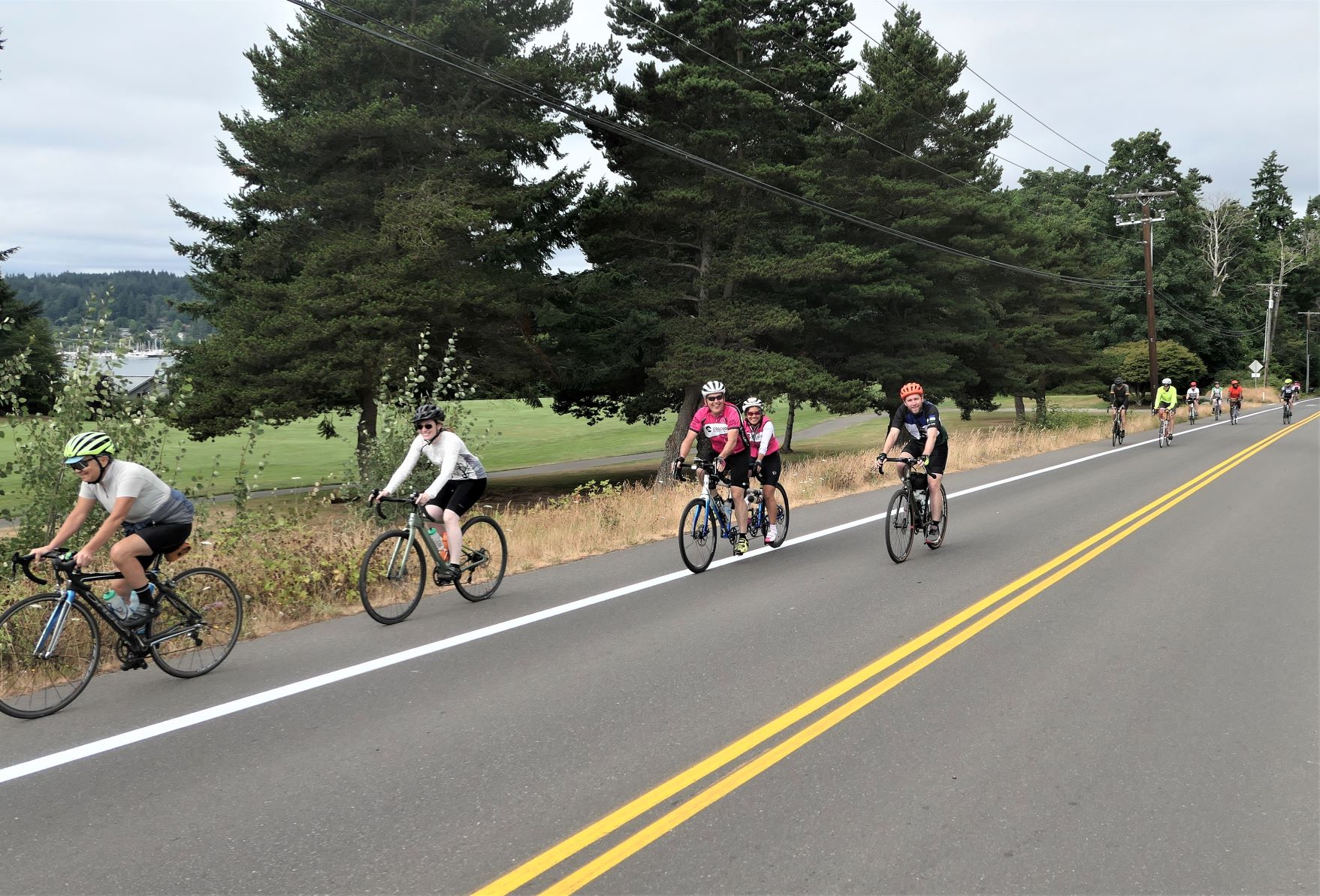 Cascade Board President Tamara Kim Schmautz, far left, leads the charge up one of the many hills that spread riders out along the route.

Bainbridge is a roller coaster, with lots of ups and downs that spread out riders. It is also beautiful, with scenic waterfront roads, lush forests, creeks, and views of the Seattle skyline, Mount Rainier, and the Cascade Range. 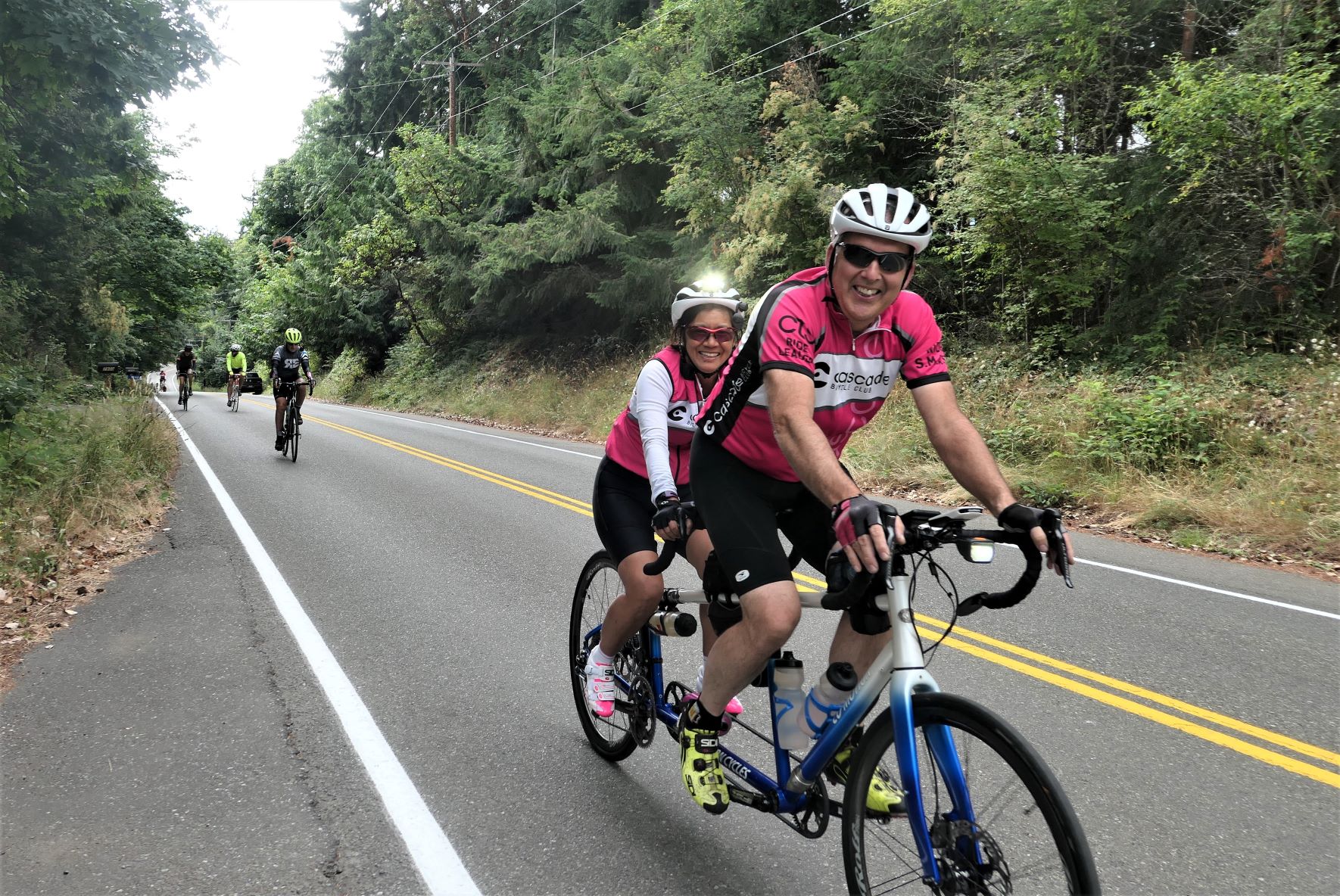 John Hubble and Mary Hoshizaki rode on their tandem, which they have used to explore much of Washington.

In addition to the ferry ride, registration includes a free food stop at Battle Point Park, located at about the halfway mark. Cascade also provides route and mechanical support, and a post-ride ice cream or non-dairy popsicle at the finish in Winslow.

Another joy of riding on Bainbridge is the abundance of great cafes, bakeries, and restaurants where Chilly Hilly participants can grab a quick snack during the ride or a meal afterward. Our pre-ride group stopped at the Rolling Bay Cafe at around mile five for baked goods and coffee. 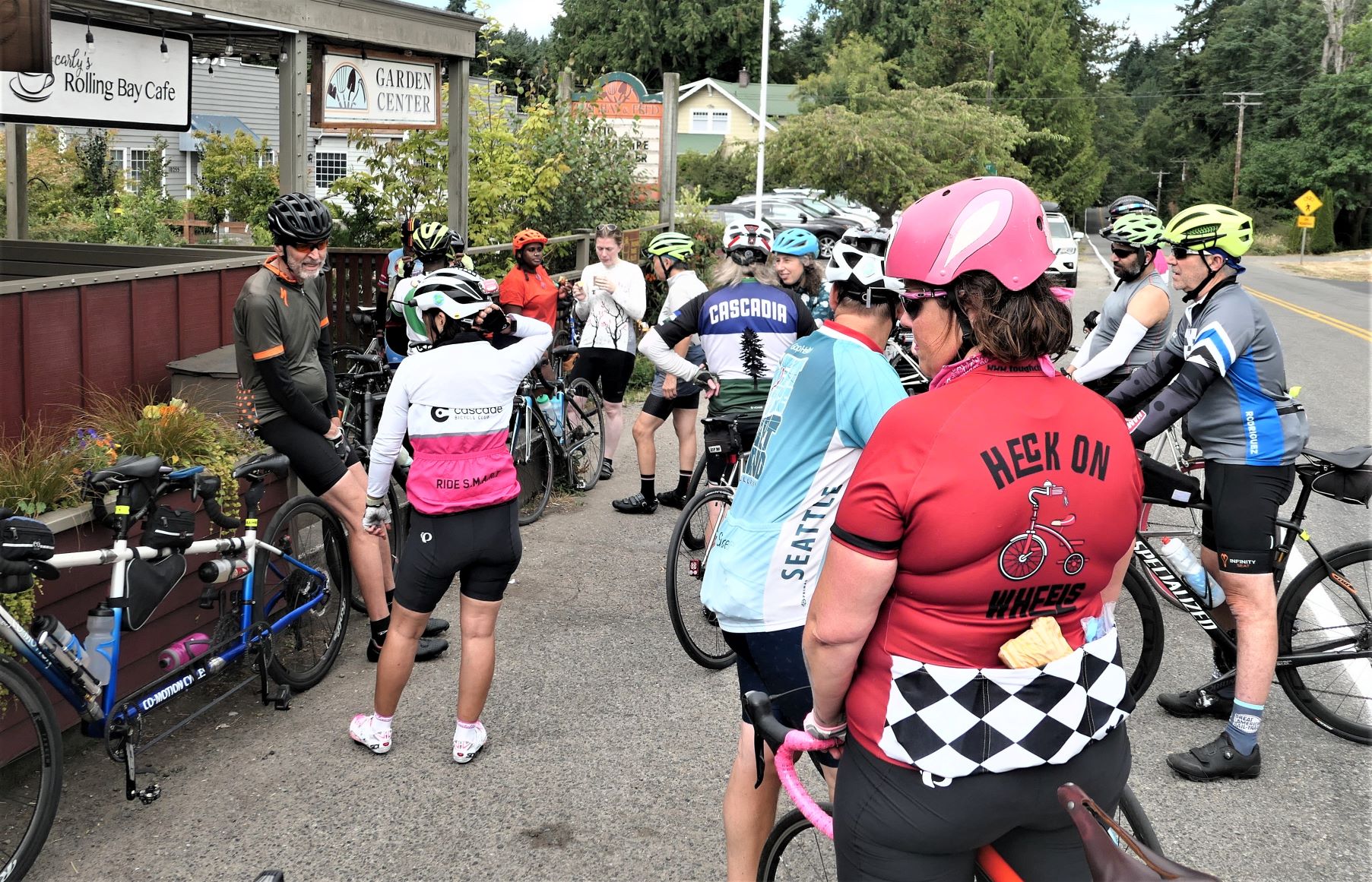 And then there are those frogs. In addition to Frog Rock, where Cascade Board President Tamara Kim Schmautz and many members of the pre-ride group paused for photos, Bainbridge is covered with frog statues set out by residents. 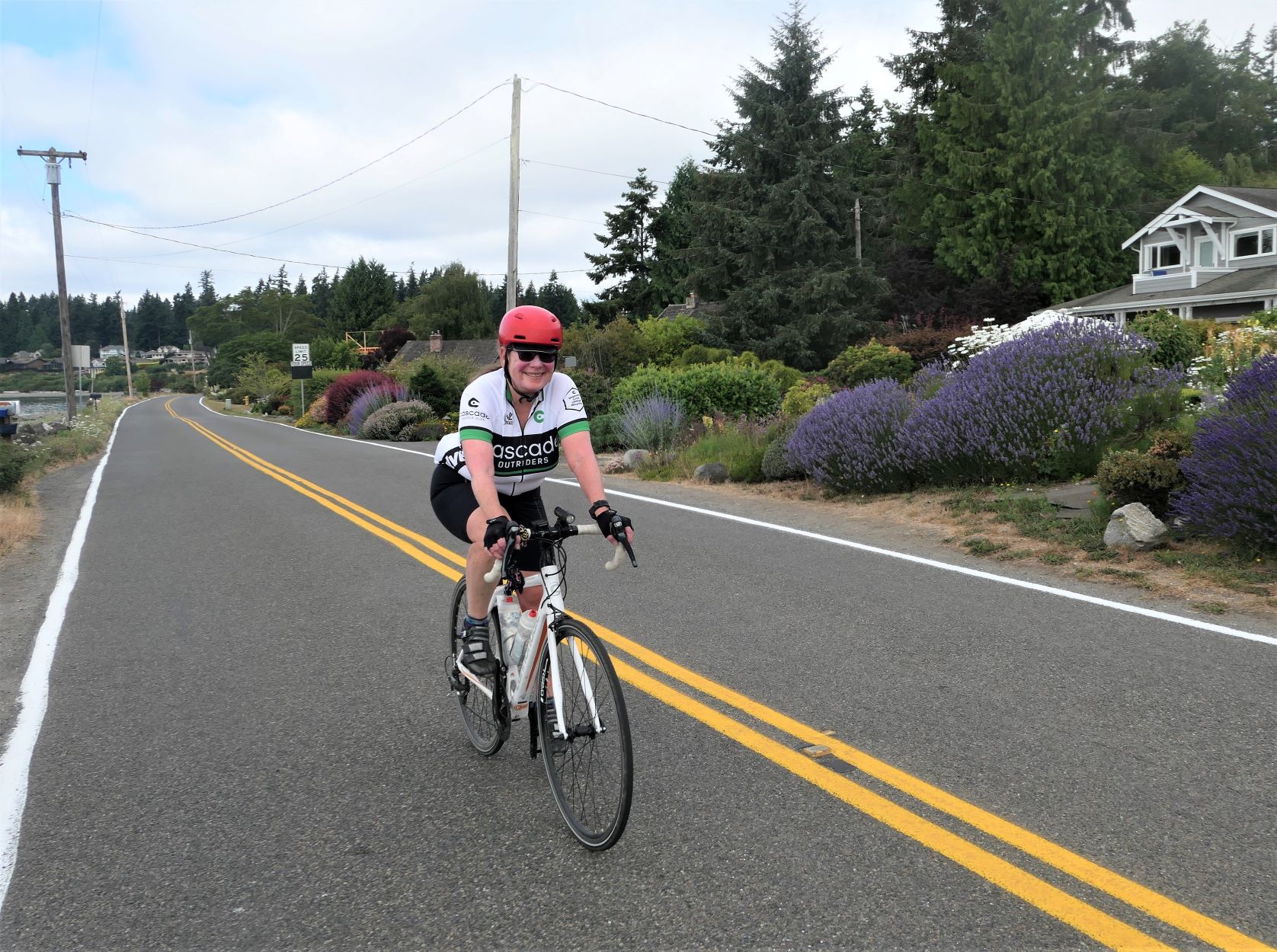 B.Sue Johnson is all smiles when the Chilly Hilly comes to Bainbridge.

Johnson lives along the Chilly Hilly Route on Lynwood Center Road, and she and her neighbors enjoy watching the colorful parade of riders pedal by. For riders concerned about the hills, Johnson stresses that there are many options for short cuts. “If you are cramping up because hill riding is not part of your daily diet, Winslow is never very far away from any point on the big circular route,” she says.

State Route 305 runs north to south and “provides the flattest and most direct route back to Winslow and the ferry, if not the most scenic, and it has a nice broad shoulder,” Johnson says. 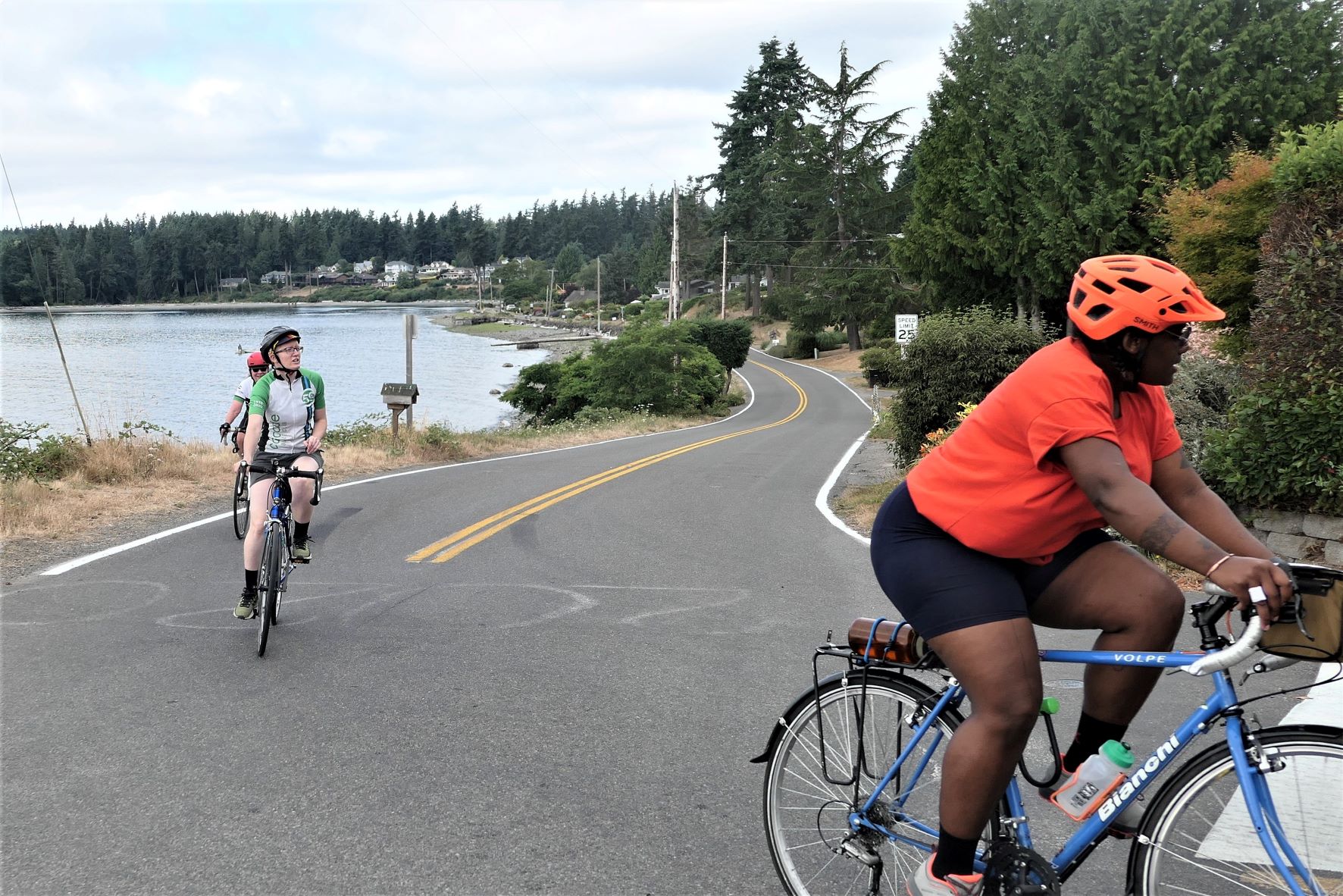 While I had to leave the group pre-ride early, the other riders ended their afternoon in Winslow with food, and stories. It was a fun day of riding, friendly camaraderie--and frogs. 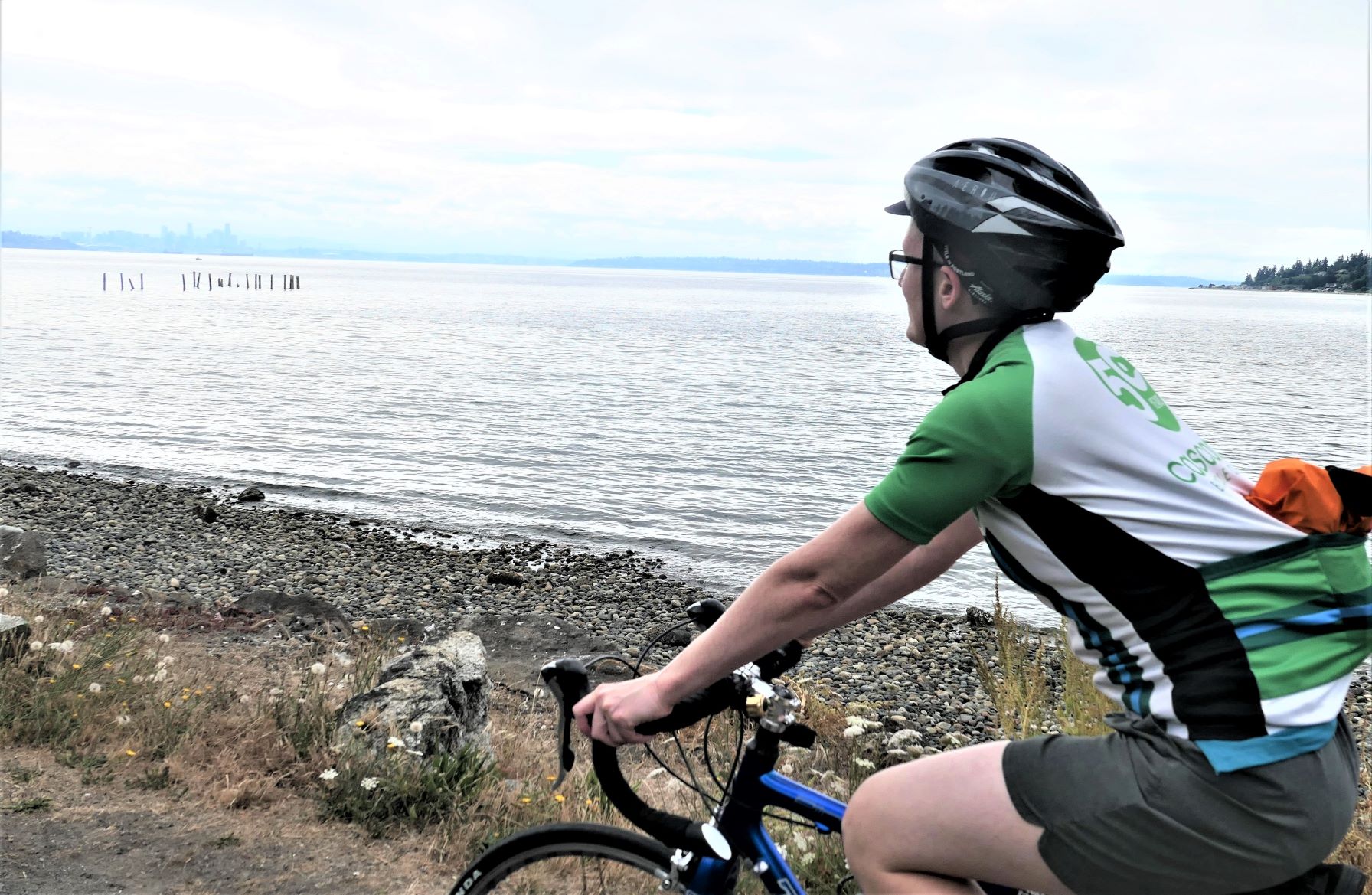