The Peace Peloton: Pedaling for Racial and Economic Equality

Created to increase spending at Black-owned businesses, the Peace Peloton rides begun in Seattle are igniting interest nationally and internationally--with cycling groups in San Francisco, London and Brooklyn considering their own. "We want to mobilize people on bicycles to do something right now. We don’t want to wait anymore." 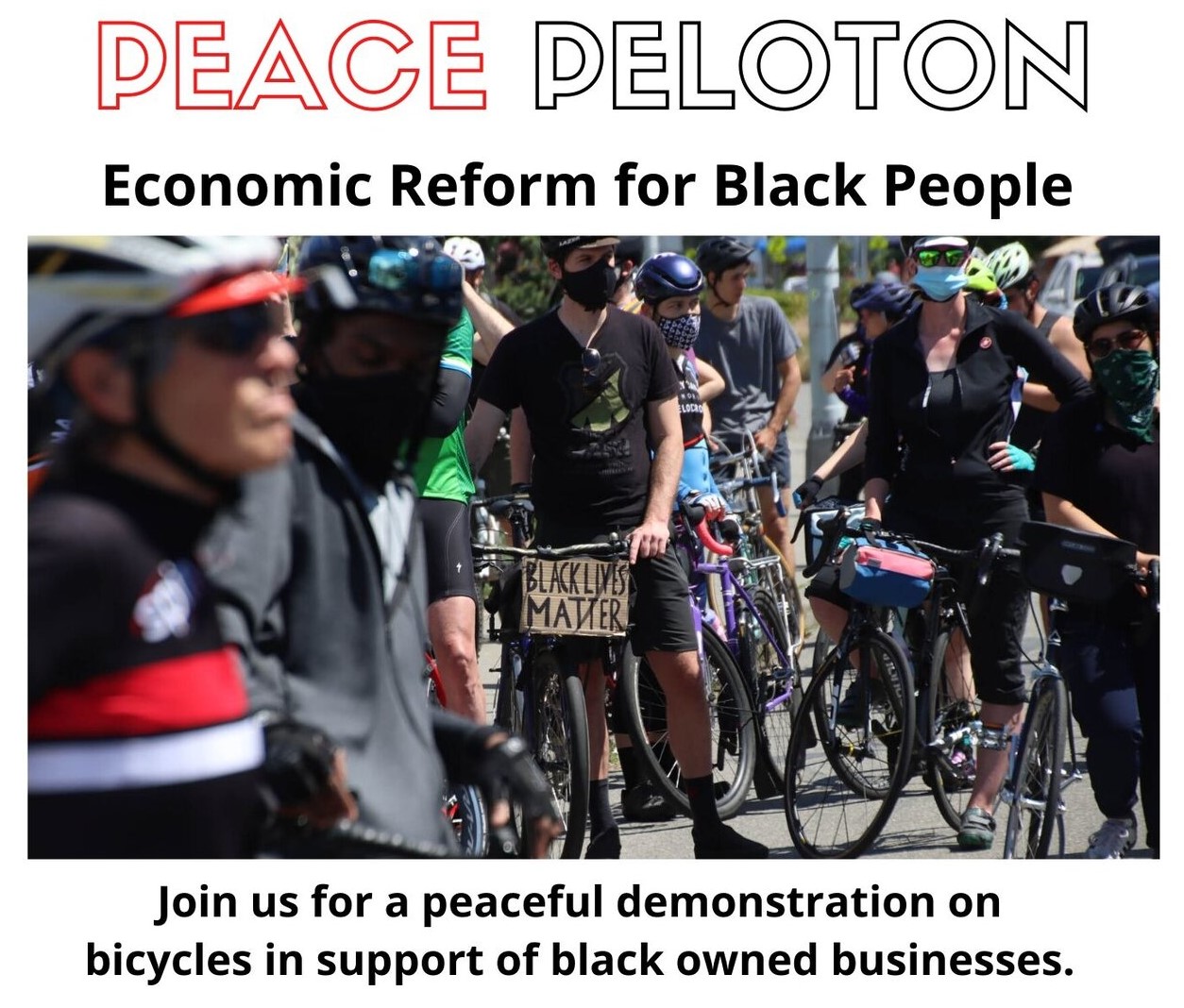 On a sunny Saturday afternoon in West Seattle, Reginald “Doc” Wilson, co-founder of the Peace Peloton, stands above a crowd of people on bicycles and launches into a rallying cry about the need for economic justice for Black people.

“We are all gathered here to advance change. Change in the American dream that was promised to all, but only made possible for a few--and not people who look like me,” he shouts to cheers from the mostly white crowd, comprised of parents and children on cargo bikes, young adults with Black Lives Matter and Peace Peloton signs on their handlebars and backs, older riders on electric bikes. “Who’s ready to mobilize! Who’s ready to ride!”

Moments later, after some bicycle safety instructions, Wilson and co-organizer Ed Ewing, founder of Cascade Bicycle Club’s Major Taylor Project, lead the group on a ride across the city to the Northwest African American Museum. 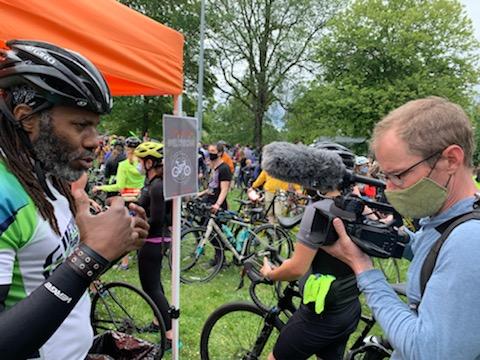 Wilson talks to media at the second Peace Peloton event held on June 13.

For Wilson, who expected maybe 30 people to show up for the hastily planned event, billed as “a peaceful demonstration on bicycles in support of Black-owned businesses,” the turnout of 322 people on June 6 was a huge success that led to a second Peace Peloton the following Saturday, with a third planned for June 27.

Now, there is interest in expanding the Peace Peloton rides, an outgrowth of the Black Lives Matter protests, nationally and internationally. Wilson says bicycle groups in San Francisco, London and Brooklyn have contacted him about creating Peace Pelotons in their own cities. “The word is out,” he says. “People are motivated to help. What’s important to us is that we have one very simple mission: economic reform for Black people.” 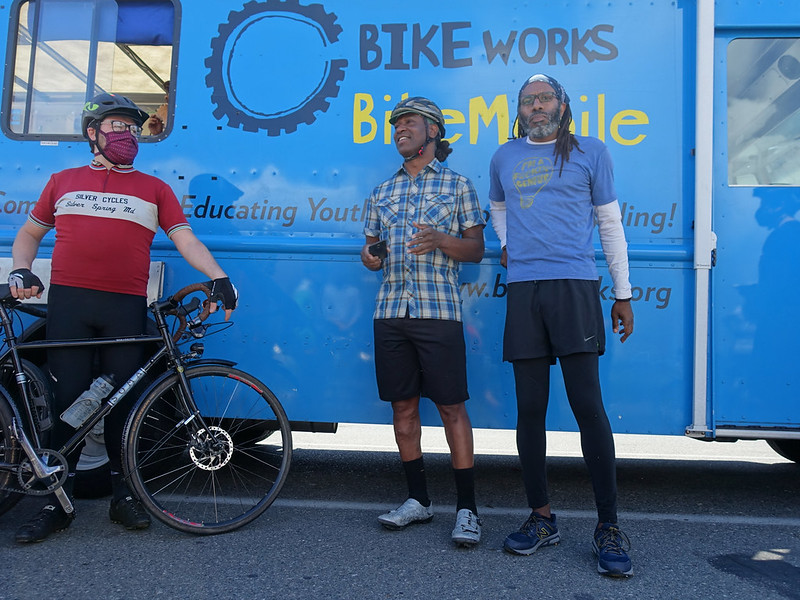 Cascade reached out to Wilson, a life coach with the skills of a motivational speaker, to learn more about the Peace Peloton, his passion for bikes, using bicycles and the cycling community as tools for economic justice, his personal history of police harassment as a Black man, and Cascade’s historic failings on the issue of race and inclusion. He sat down for a Q&A with us.

What’s your history with bikes?

Growing up in Gary, Indiana, we didn’t have any money so I learned how to assemble bikes from parts. I didn’t get serious about riding until I moved to Washington, DC, where I started mountain biking. I just got amped about it. Eventually I got a road bike, and I got stronger and faster and started attending group rides, but they seemed elite, with these guys on really expensive road bikes, so it was intimidating. That led me to start a group called Saturday Cycle. Every Saturday morning we would get together and just ride different routes. That group grew from four members to 86 by the time I left DC and moved back to Seattle in 2014.

Why do you believe bikes can be a tool for racial equity?

The bicycle is my tool, my passion. Over time I found that I could cultivate my passion into a purpose that advances the aims of economic reform for Black people. That’s my jam. I like bicycling. I ride everywhere. If I can recruit bicyclists to advance an aim, so be it.

Where did you get the idea for the Peace Peloton?

This isn’t a new idea. Peace Peloton is sort of a bar crawl with purpose, except on bicycles. I had been asking myself: ‘How do we take economic reform into our own hands?’ With bikes as our tools, I thought, ‘Let's identify Black-owned organizations and businesses that need us, that want to put their goods and services out into the world.’ It’s difficult in certain neighborhoods to attract a broad spectrum of people. So I figured, ‘Let’s ride there, bring some customers on bikes, create some buzz. Let’s take our bicycles to the places that need us.’

What is the vision and goal of Peace Peloton?

We hope to do Peace Peloton rides every weekend or bi-weekly, starting and ending at a Black owned business. I’m talking with the Urban League and other organizations to identify Black owned businesses that want our help. Before a ride I will visit the businesses and see what their needs are, and if they want our support. We don’t want to be a burden. If they are on board, we will work out a dedicated fixed menu. We want it to be grab-and-go with a simple cash exchange. Get your pastry and hand over some money. At the same time we want to spark curiosity in the Peace Peloton from people who see our bike processions, and among other patrons of the businesses we visit.

Why is the Peace Peloton focused on economic equality?

For criminal justice and policing reform we need to wait for government action. Same for health care reform, and many other issues where we need government action, which can take years. But we can do economic reform right now. In its simplest and most direct form, economic reform is me reaching into my wallet and taking out $10 and spending it at a Black-owned business. We want to mobilize people on bicycles to do something right now. We have been asking and waiting and being patient for a long time. We don’t want to wait anymore. 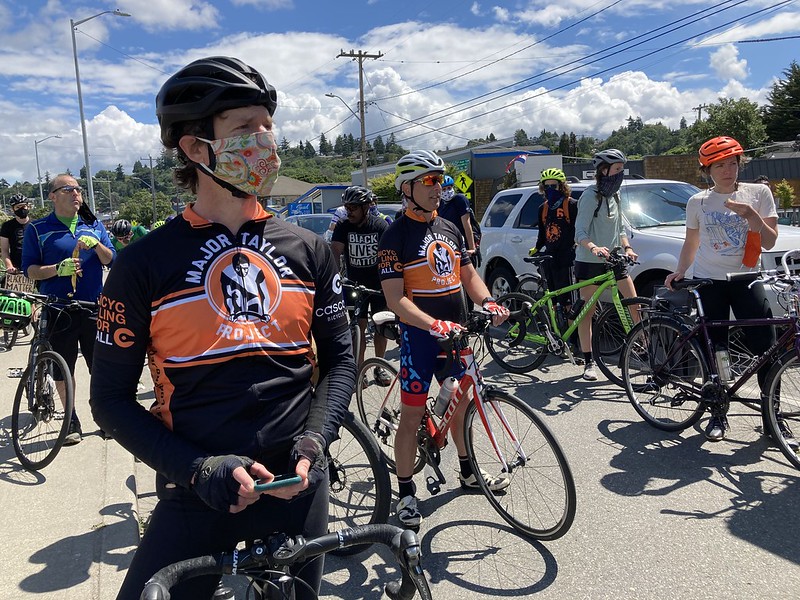 How can white allies help?

This is interesting. I have been talking to my Black brothers and sisters and asking them: ‘Have white people been asking you what they can do all of the sudden?’ I’m curious, why are you asking me? You know what to do. Take your money and spend it at Black-owned businesses. Hire Black people. Bring Black people into decision-making positions. Bring Black people onto your boards.

What can Cascade do?

I moved to Seattle in 2014 as a human who likes to ride bikes. I went on some Cascade group rides. They were all predominantly white men aged 40 to 60 on these expensive bikes. That was intimidating. So I was frustrated with Cascade. I saw no effort from Cascade to extend an invitation to people like me. I felt like an outsider. I always rode STP and supported MTP (Major Taylor Project) because I support the program, but I started my own rides. I would see Black cyclists on the street and I’d say, ‘Hi my name is Doc, let’s ride.’ Before long we had this group of entrepreneurs and business owners, and we ride on many Saturdays.

I think Cascade would resonate if they brought on more diverse people. I’m talking about stepping up your recruitment efforts and bringing on Black and brown people who are talented. You are having all these diversity and equity meetings. Hire some well-qualified Black people. Let’s all be invited to the table. Some Black people in the cycling community are not very happy with Cascade. You should have done it years ago. Now it doesn’t seem legitimate. Black people are tired. We are sick and tired of being treated like second class citizens. We are sick of white people asking us what they can do when they know what they can do. I don’t want to diminish the value of diversity and inclusion programs and what they add to organizations, but the fact you need one is a red flag.

I’ve had police walk up to me many times and ask me where I’m going. An adult man. Where am I going?

(Wilson then tells of an experience he had while parked in a car with his ex-wife in a subdivision in Bellevue.)

I look in the rear view mirror and there are suddenly four police officers there. I put my hands on the dashboard, like I’ve been trained. They pulled me out of the car and put me on the hood. Apparently they had a report of a Black man assaulting a white woman. The only thing that stopped it was, when they looked at her ID, in the box where it identifies your race, it said Black, so they left. No apology. Nothing. They just got in their cars and went away after giving me 30 minutes of terror. That’s what Black people are exhausted of. I love people. I’m a life coach. I examine people for a living. But I’m not for this nonsense anymore. You ask me what you can do? You know what to do. 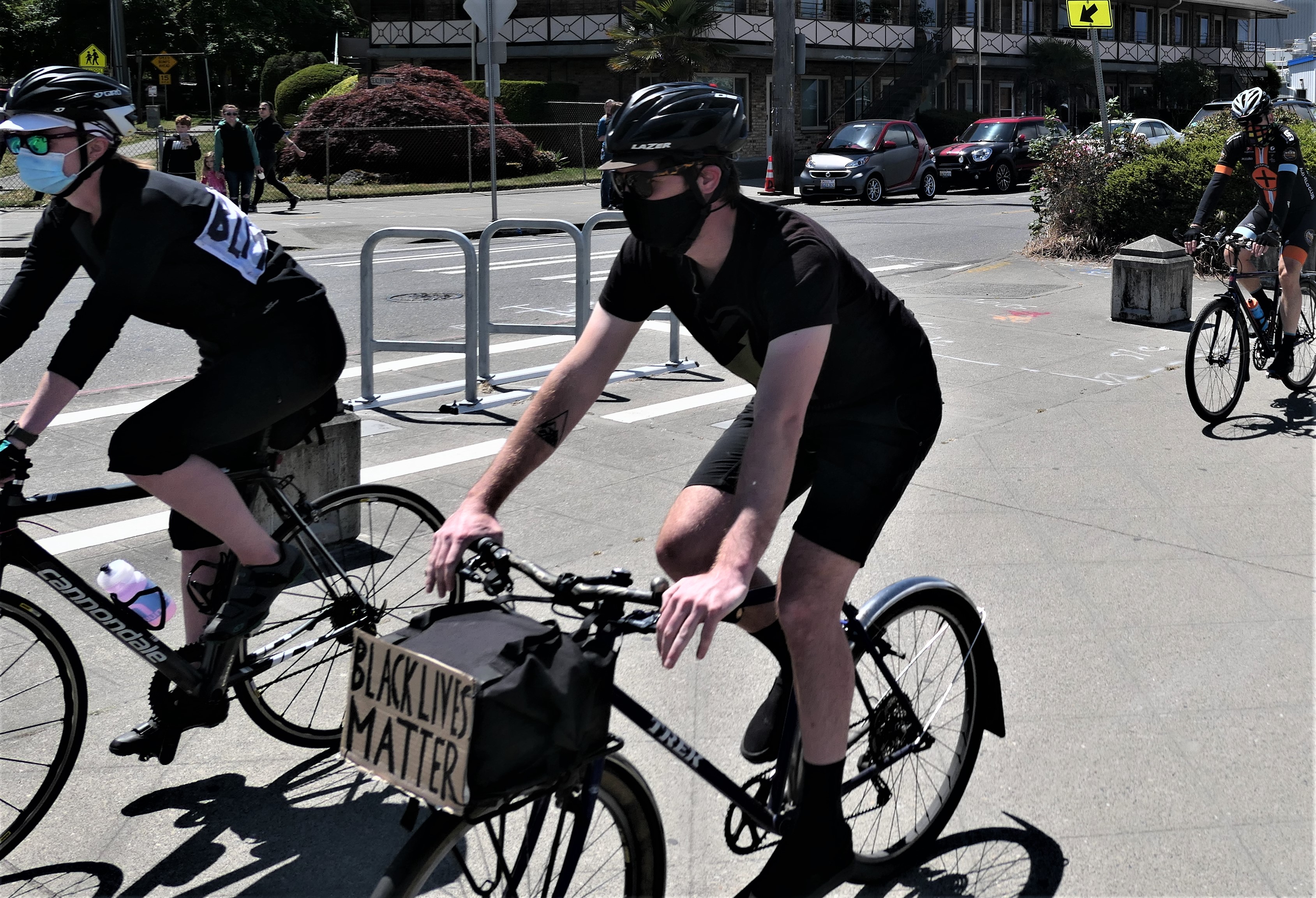 Events season may be coming to a close, but there's much more ahead

Did you know many of Cascade’s rides and events are ebike friendly?