Last summer’s colossal wildfires were a dramatic and frightful reminder of the threat that climate change poses to bicycling and the clean air we rely upon to breathe, ride, and live.

For multiple weeks, health officials urged people to stay indoors and avoid outdoor activity due to thick smoke that choked our skies and made breathing difficult. Instead of being a healthy activity, riding a bike during the pandemic became dangerous.

Due to the mounting threat that the climate crisis poses to our air, the livability of our region, and safe bicycling, Cascade Bicycle Club has made Climate Justice one of its core values. Cascade has also joined the Climate Advocates’ Hub of Seattle and King County, a multi-organization umbrella group pushing for greenhouse gas reductions and a Green New Deal for Seattle and the region.

“By joining forces with other organizations we hope to have a louder collective voice that can push elected officials to enact rapid and comprehensive actions to fight the climate crisis and make it easier for people to get around by foot, bike, and transit,” said Tamar Shuhundler, Cascade’s community organizer and representative on the Climate Advocates’ Hub.

Transportation is the largest source of greenhouse gas emissions in Seattle, the state of Washington, and the United States. Bicycles are a low-carbon solution, alongside mass transit and increased rates of walking.

One of the Hub’s immediate priorities is to prevent the Seattle City Council from diverting $80 million away from bike, pedestrian, and mass transit projects.

On May 19, the Board of Cascade Bicycle Club approved a new Climate Justice value statement as part of the organization’s Mission, Vision, and Values. The statement reads:

The new value statement revised an earlier version adopted in 2020 that focused on Environmental Sustainability. The wording revision is a recognition that the climate crisis is one of the greatest threats facing human civilization. The new value also acknowledges the fact that climate change already is and will continue to disproportionately harm communities of color.

Individuals pushing for climate action increasingly recognize that they must work in tandem with efforts to promote racial equity and end systemic racism. A recent Time article headlined “There is No Climate Justice Without Racial Justice” concluded that climate action or racial justice movements “must be inextricably linked” if either is to succeed.

Why? Because Black and Brown communities are already suffering more from the impacts of pollution and climate change. A study by the Proceedings of the National Academies of Sciences shows that Black and Latinx/Hispanic communities breathe dirtier air than white communities whose activities cause most of this pollution. A study in Science shows that the climate crisis will cause the most economic pain in the United States’ poorest counties.

Essentially, according to experts, climate change is systemic racism and colonialism on steroids. 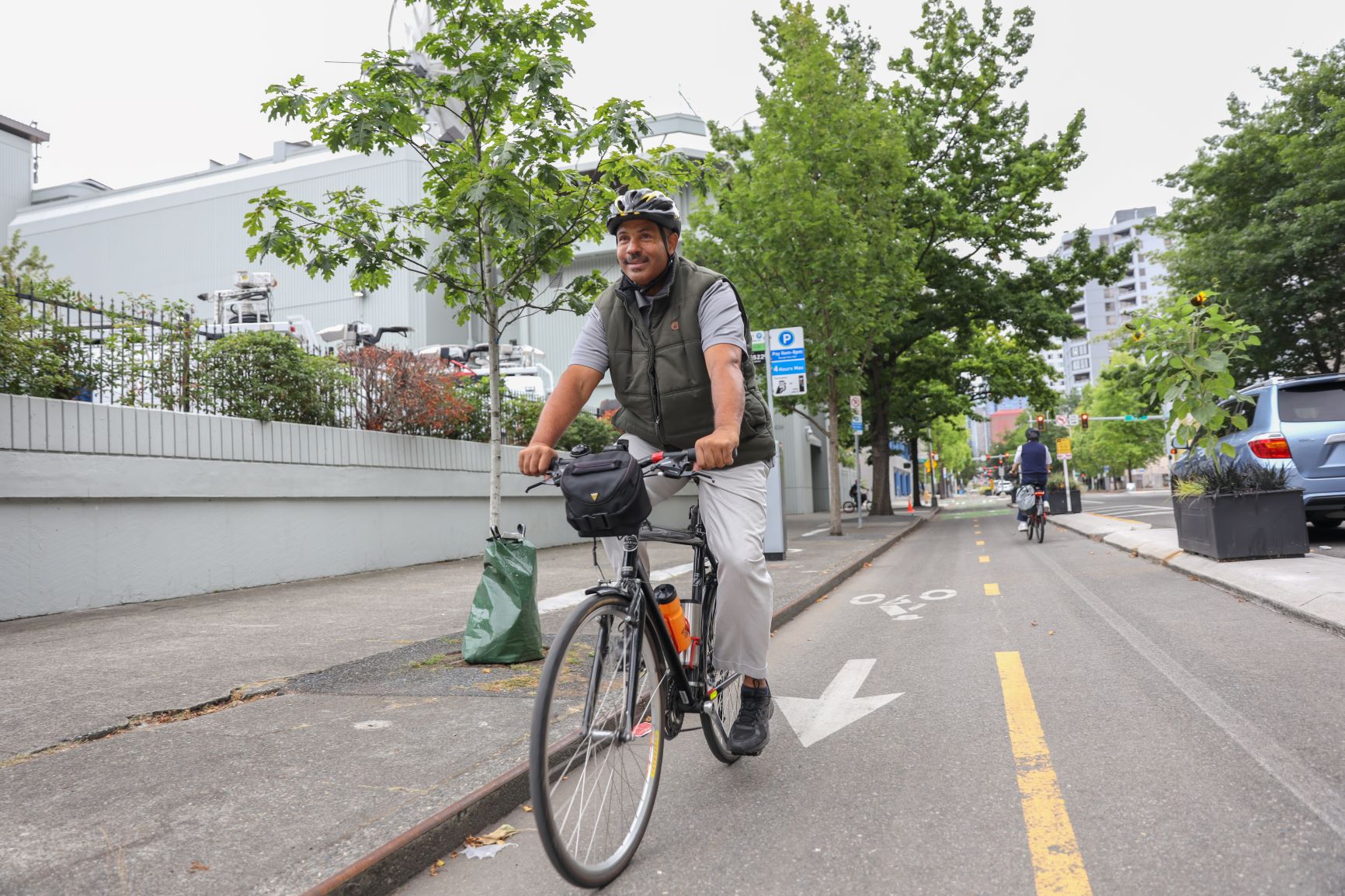 Getting more people to voluntarily swap car trips for bike trips, while beneficial, will not solve the problem. The climate crisis can only be solved, experts say, by government action that helps the global economy rapidly transition away from its reliance on fossil fuels, and by major corporate polluters doing their share.

How can the bicycling community help? By showing up and speaking up for better safety infrastructure and more transit options that make it easy for people to drive less. And by pressing elected officials for more action on climate.

Cascade plans to hold or join “bike for climate” events leading up to November, when the next United Nations Climate Change Conference will bring together world leaders in the United Kingdom. Our legs are strong. Now our voices must be heard. Nearly 49 million Americans ride bikes. We can be a powerful coalition in the push for climate justice.

E-Bike Touring with a Cascade Member and Climate Activist