Bicycling provides physical and mental enrichment to a National Guard sergeant and his team serving their community by working at a Seattle food bank. 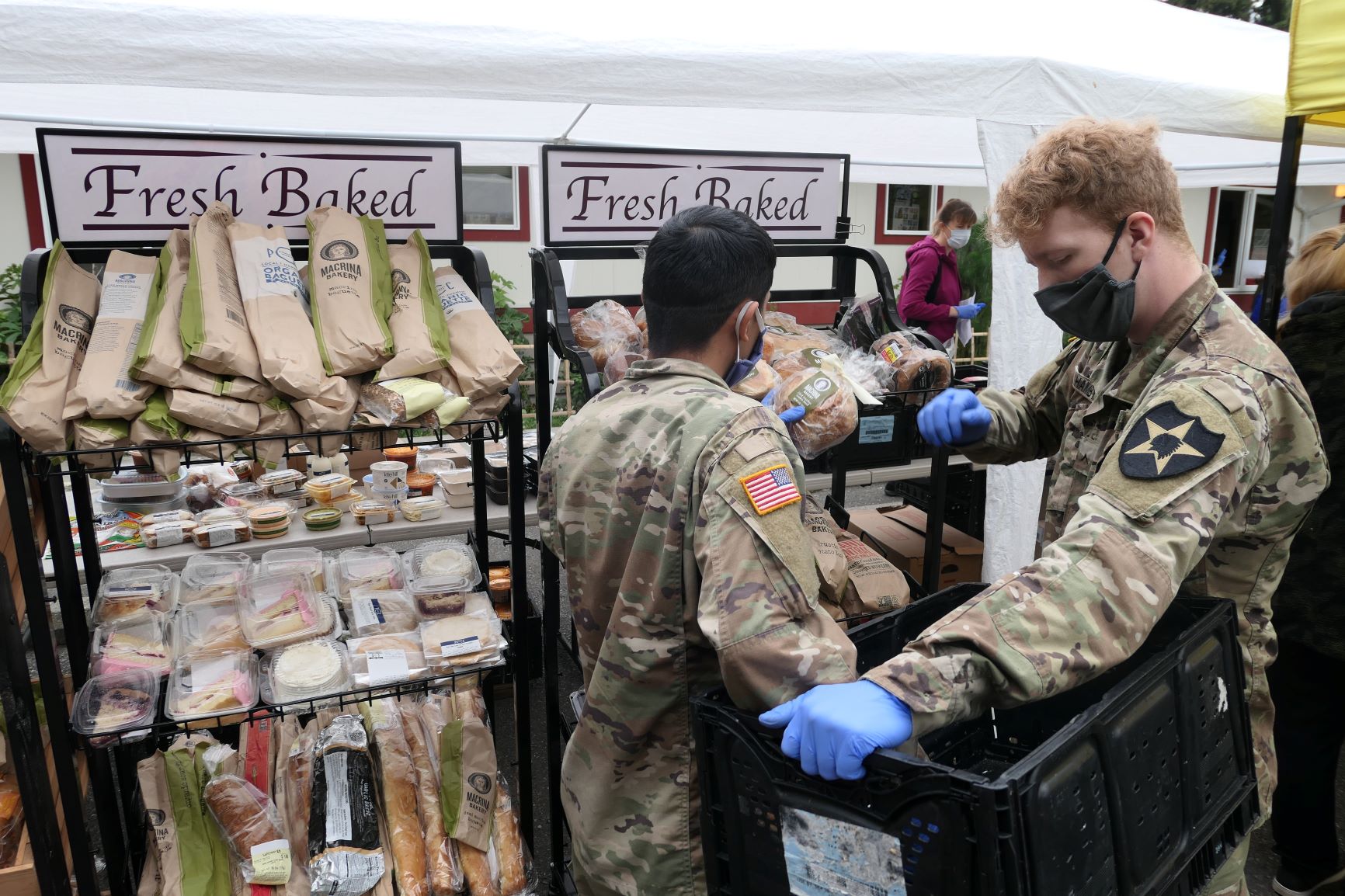 Dressed in his Washington Army National Guard camos and wearing a face mask, Sergeant First Class Aaron Smith pauses to talk about his love of bicycling while he works at the White Center Food Bank in Seattle.

“Cycling is really important to me, for both my physical and mental health,” says Smith, who oversees a team of seven other National Guard members who have been assigned to work at the food bank. “Riding is great for stress relief and for emotional healing and resiliency.”

On Wednesday, Cascade Fleet Manager Stephen Rowley visited the food bank on Seattle’s south side to deliver eight bikes to Smith’s team, many of whom do not own bikes. The soldiers were all eager and excited as they pedaled around the parking lot before the food bank opened, testing the shifting and adjusting their helmets. 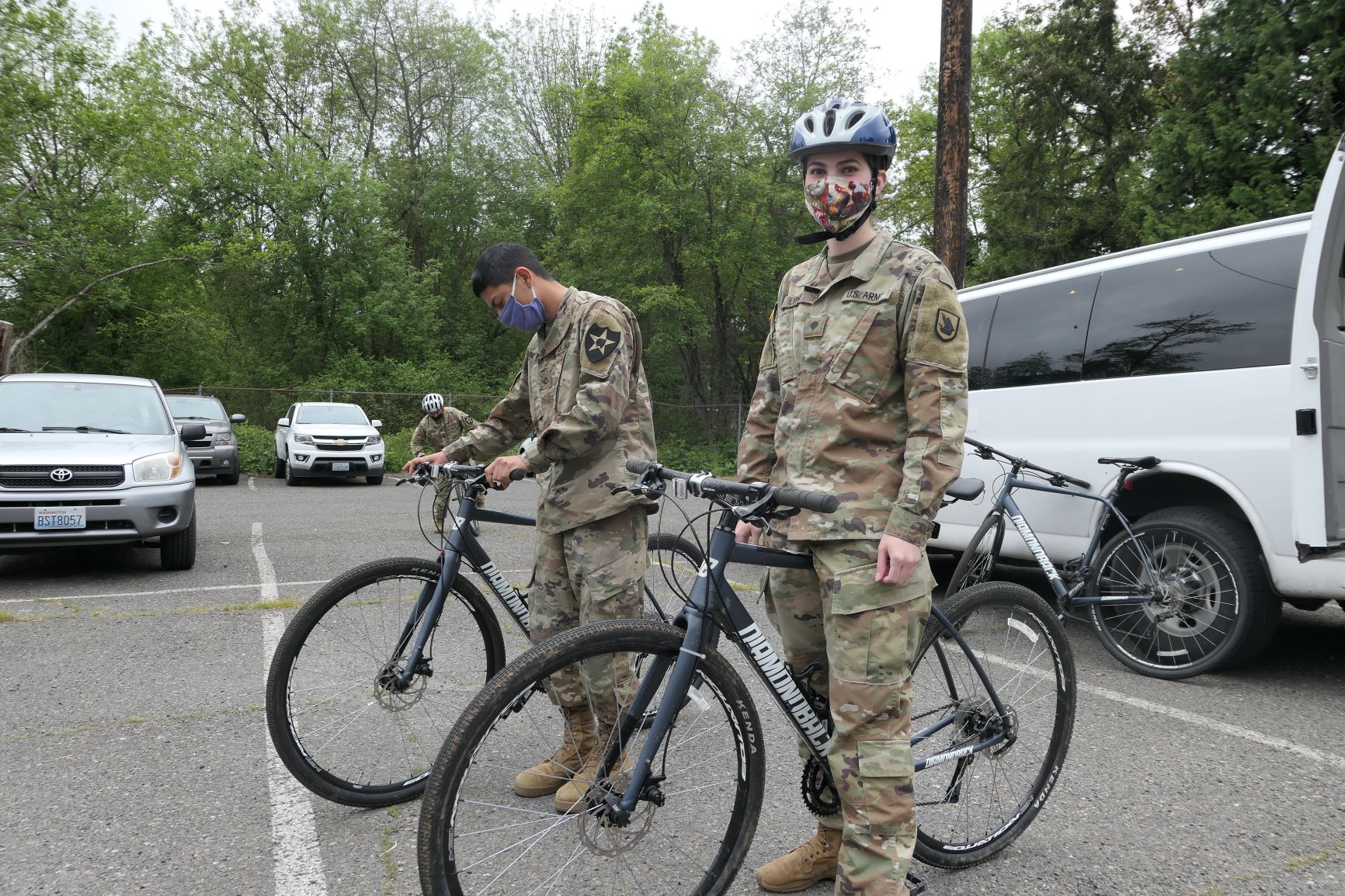 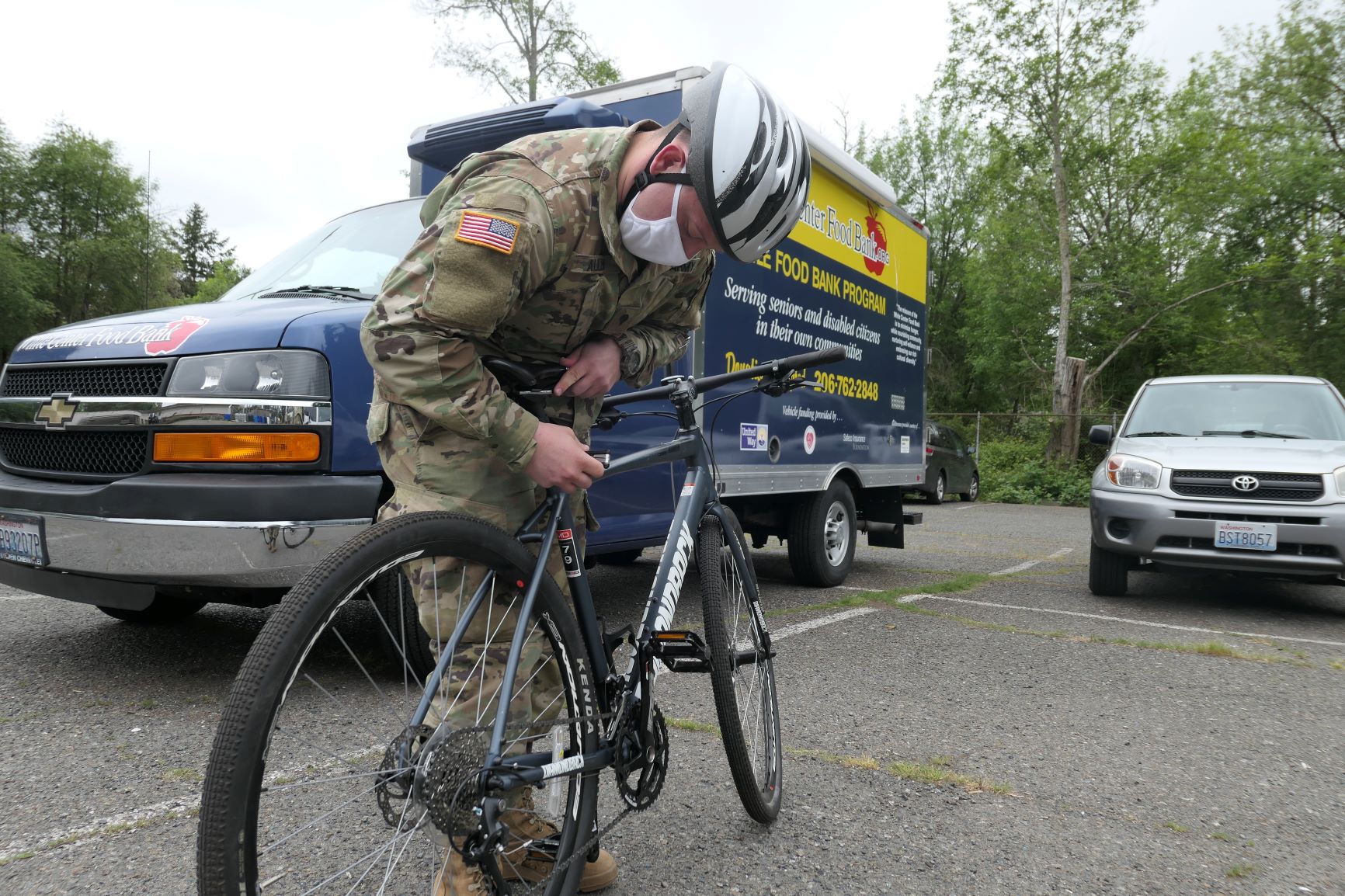 “I have a bunch of soldiers who come from different units, and some of them haven’t ridden in a long time, so this will be part of their physical fitness training, and it will also hopefully be beneficial for their emotional resiliency,” Smith says.

For Rowley, who typically coordinates bike deliveries to Seattle area schools through the Let’s Go program, which has switched to producing online video curriculum due to COVID-19, lending the bikes to the soldiers was uplifting. “They can keep the bikes for as long as they need them,” he says. “We are eager to help, and these guys are doing great work that we are happy to support.”

Watch the interview with Rowley on King5 TV.

Smith contacted Rowley to borrow the bikes after talking with a member of his team, Private Second Class Kyle Hamby, who in high school participated in Cascade’s Major Taylor Project. “I feel that what Cascade does for the community is awesome,” Smith says.

Serving Those in Need

It is 10 a.m. outside the food bank and a line of more than a dozen people has already formed as Smith’s team sets up outdoor tables under tents and fills shelves with loaves of bread, vegetables, cans of beans and more. “Our mission here is to provide critical assistance to the staff by filling in positions that are vacant due to a decrease in the usual volunteer pool,” Smith says. 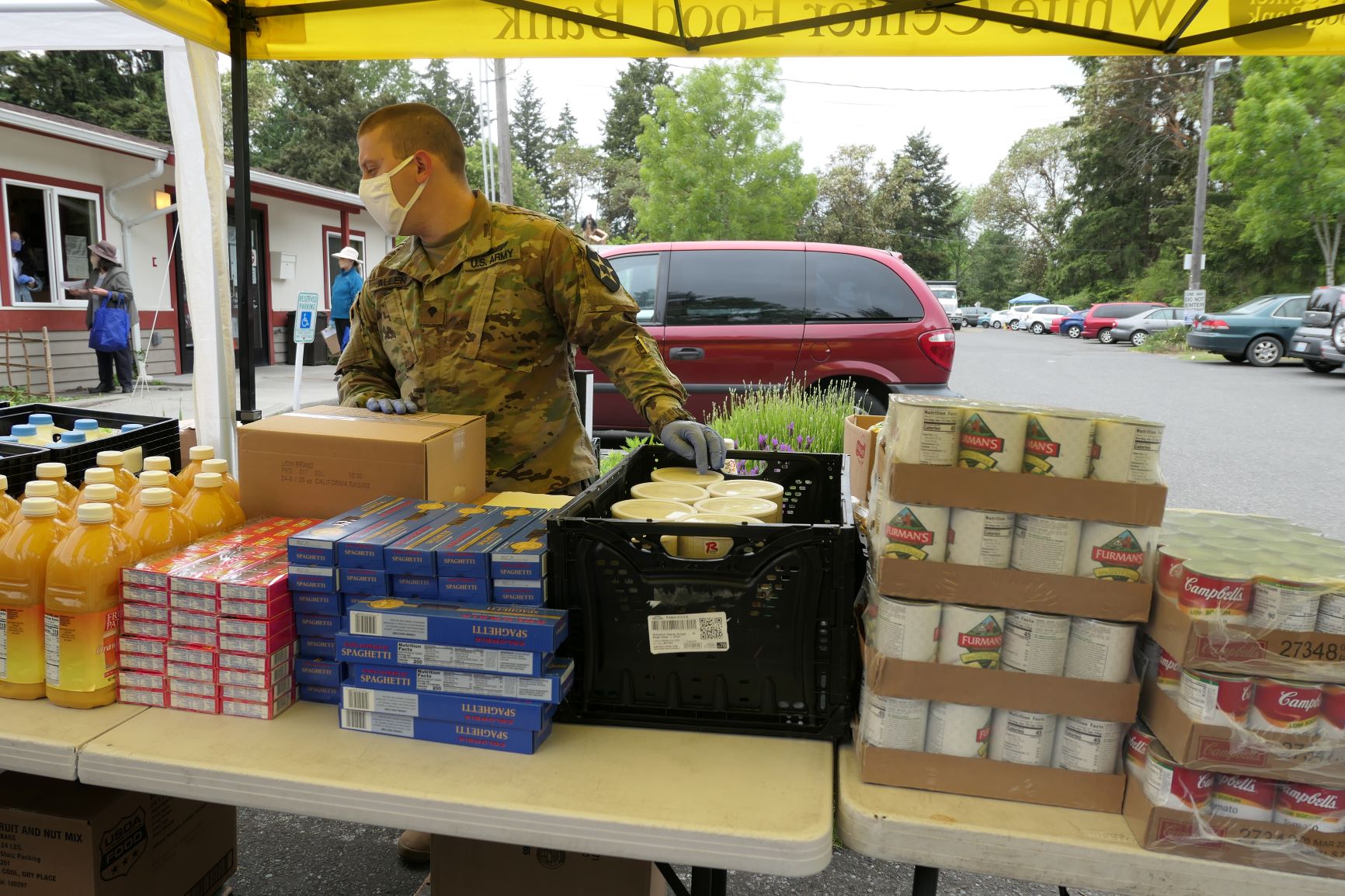 Food banks across Washington have lost many of their volunteers, who are often retirees or senior citizens, due to concerns about COVID-19. “We have eight soldiers assisting with tasks that range from food packaging and storage to food distribution at the front lines. We work with the managers here to help in any way we can. Like a lot of food banks they have seen a big increase in demand,” Smith says. Overall, about 900 members of the National Guard are working in 63 food banks statewide.

Smith got hooked on bikes in 2014 after friends goaded him into riding in Cascade’s Seattle to Portland, or STP. Pedaling 206 miles in two days with thousands of other people sounded crazy at first, but Smith had a blast. “I was blown away by how fun it was.” He had such a good time that he joined Cascade as a member and rode STP for the next four years until, in 2019, his unit was deployed to Afghanistan.

While serving in Afghanistan, he went online and signed up for the 2020 STP, “in hopes that it would help me reintegrate back to home life after Afghanistan.” But when he returned home to Seattle in March, life had changed substantially due to the pandemic, and Smith was saddened by the cancellation of STP due to COVID-19. “That hasn’t stopped me from continuing to use cycling as a healing activity.”

Now, Smith is pleased to have another mission: “I want to extend my knowledge and joy of cycling to my soldiers.”

Watch the video of SFC Smith talking about Cascade and the joy of cycling.

Multiple TV stations showed up to interview Smith about his team's efforts at the food bank, and to film the handoff of the bikes. 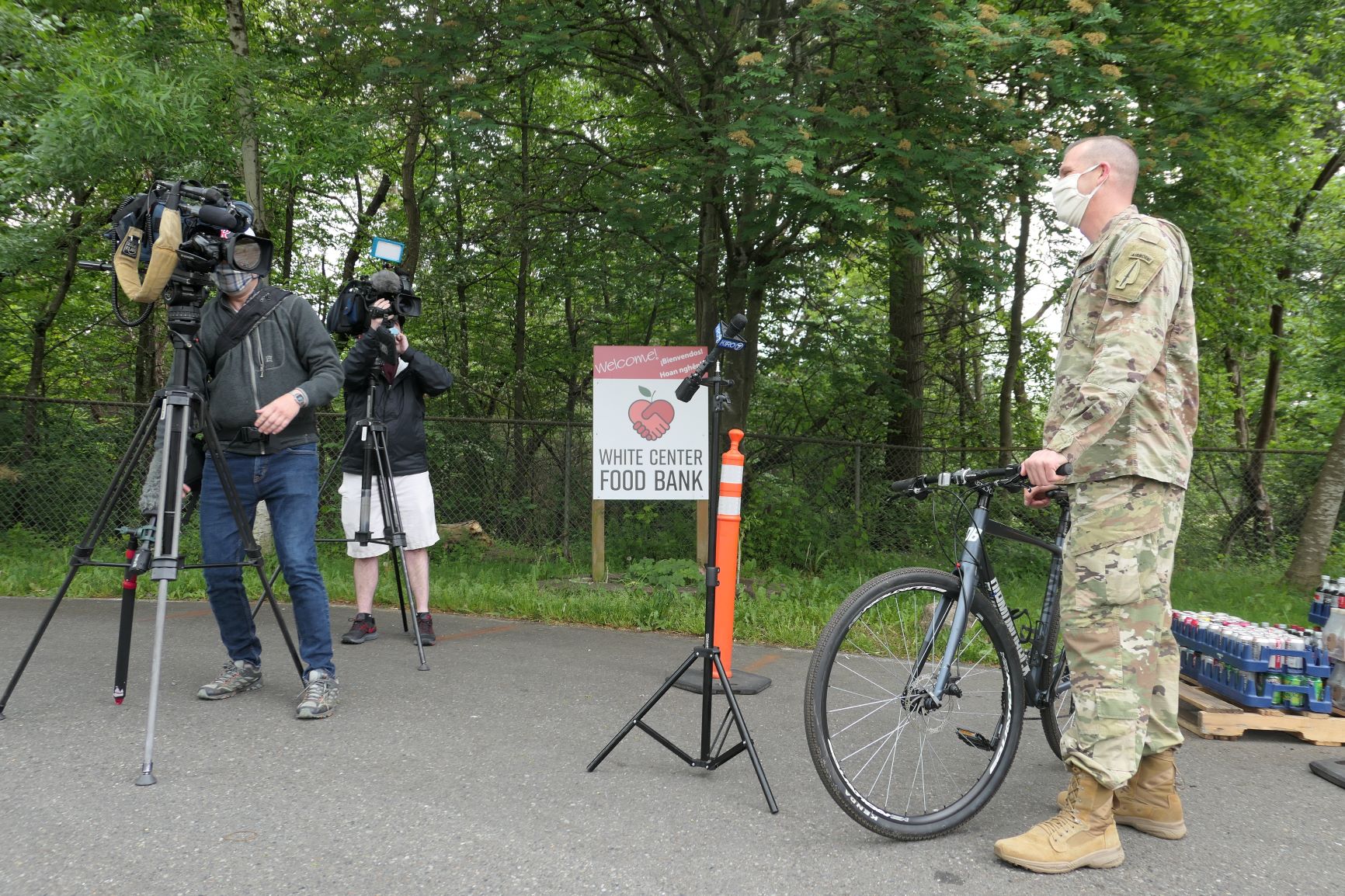 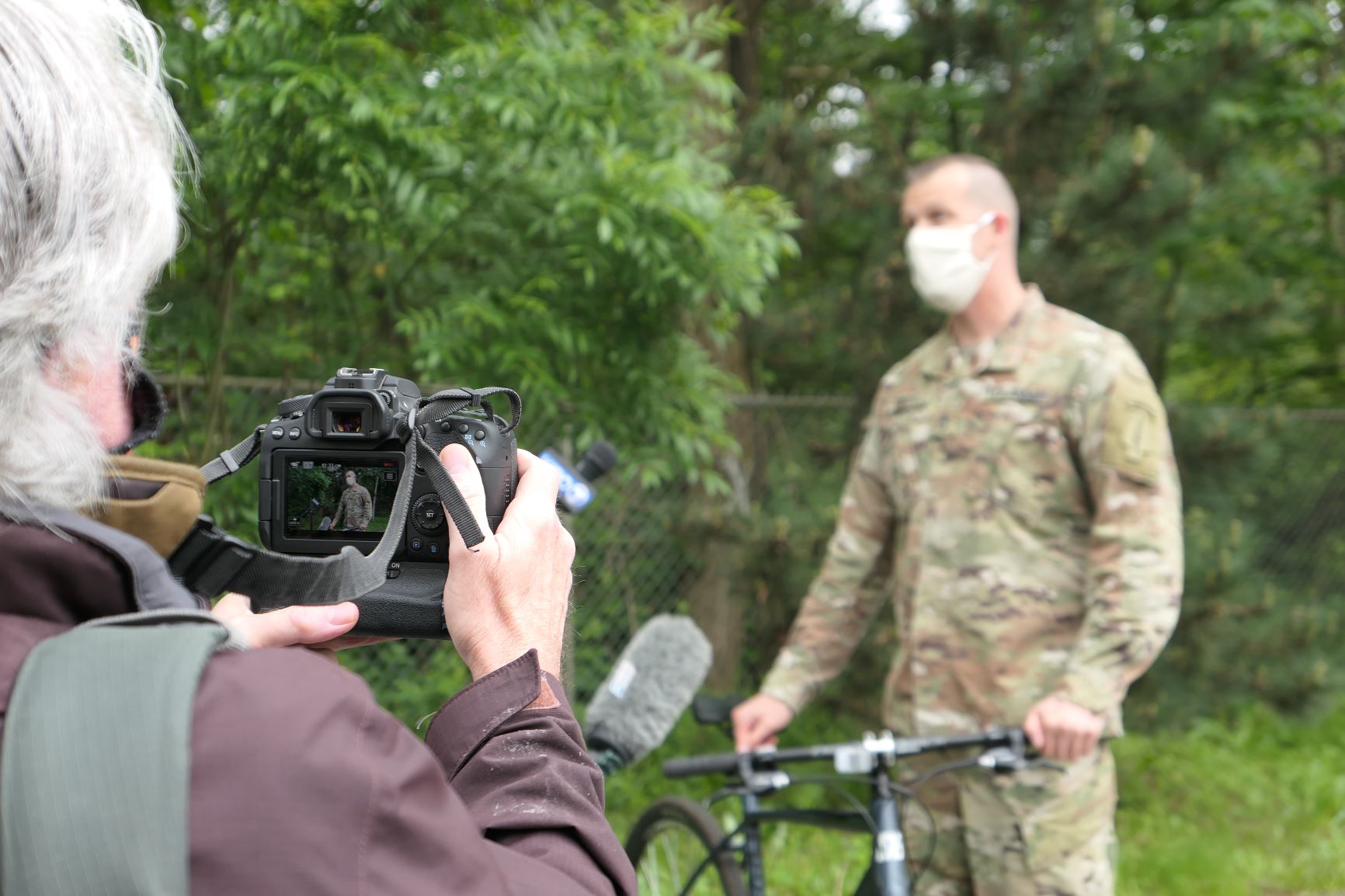 Praise for Cascade’s Learn to Ride Classes. “I Was Able to Learn in Less Than One Hour!”

What We Learned at the 2022 Bike, Walk, Roll Summit