“Being a ride leader for MTP is a chance for individuals to encourage, teach and provide access to bikes and skills to youths and young adults who likely would not have that opportunity.”

Bao Vo had recently immigrated to the Seattle area from Vietnam and enrolled in high school when he decided to join Cascade’s Major Taylor Project, which increases access to bicycling for underserved communities. For Vo, learning how to ride and maintain a bike was the perfect way to make friends and explore the city.

Vo found his experience with the Major Taylor Project so valuable that, after graduating, he took a job as an MTP ride leader in 2017. Becoming a ride leader was a way for him to pass on his knowledge, and help more young people of color enter Seattle’s “warm and inviting” cycling community.

“Many of the youths and students that we serve are immigrants, and this after-school bike program is some of the first community they find. To some, it is the first time that they have the chance to ride a bike,” says Vo, 20, who is now studying architectural design at the University of Washington.

Do you have a passion for cycling and would you like to give back to your community? Cascade is now hiring MTP ride leaders in Tacoma and Seattle to organize and direct weekly after-school bike rides at various high schools and middle schools. Named after Black world champion cyclist Marshall "Major" Taylor, MTP reaches more than 500 youths annually in middle and high schools in central and south King and Pierce counties.

Apply Now
Ride leaders work with students in schools that are rich in racial and ethnic diversity, planning weekly rides and teaching safe cycling techniques. “Being a ride leader for MTP is a chance for individuals to encourage, teach and provide access to bikes and skills to youths and young adults who likely would not have that opportunity,” says Major Taylor Project Manager Rich Brown.

“Seeing the results of your work is inspiring,” Brown says. “These kids start at one level, often as complete novices, and they set goals, create a plan for how many miles they want to ride. If they stick with it, many of them end up riding from Seattle to Portland. “That is a big deal, going from learning how to ride a bicycle, to within a few years riding 200 miles in two days.”

Joseph Roberts, a ride leader for Cascade’s Free Group Rides program, has volunteered with MTP as a ride leader in years past, and he found the experience as enriching for himself as for the students. When he was 13, Roberts, who was raised in Hong Kong and is originally from Ethiopia, visited an aunt in the United States. One of her friends was a bicyclist who took him under her wing and showed him how to safely ride around town, how to use hand signals, and how to become a confident bicyclist.

“It changed everything for me,” Roberts says. “My perception of a bicycle went from a toy, something you ride to the end of the block, to a real transportation vehicle that allows you explore far from home.”

That experience stuck with Roberts and led him to volunteer with the Major Taylor Project at Foster High School in Tukwila. “You need to have patience and ride at their pace, slow down, remember that this may be the first time they are venturing out into the community on a bike.” Roberts went on to volunteer with Cascade for the past six years, and now works as a contract IT specialist for the 50-year-old organization. 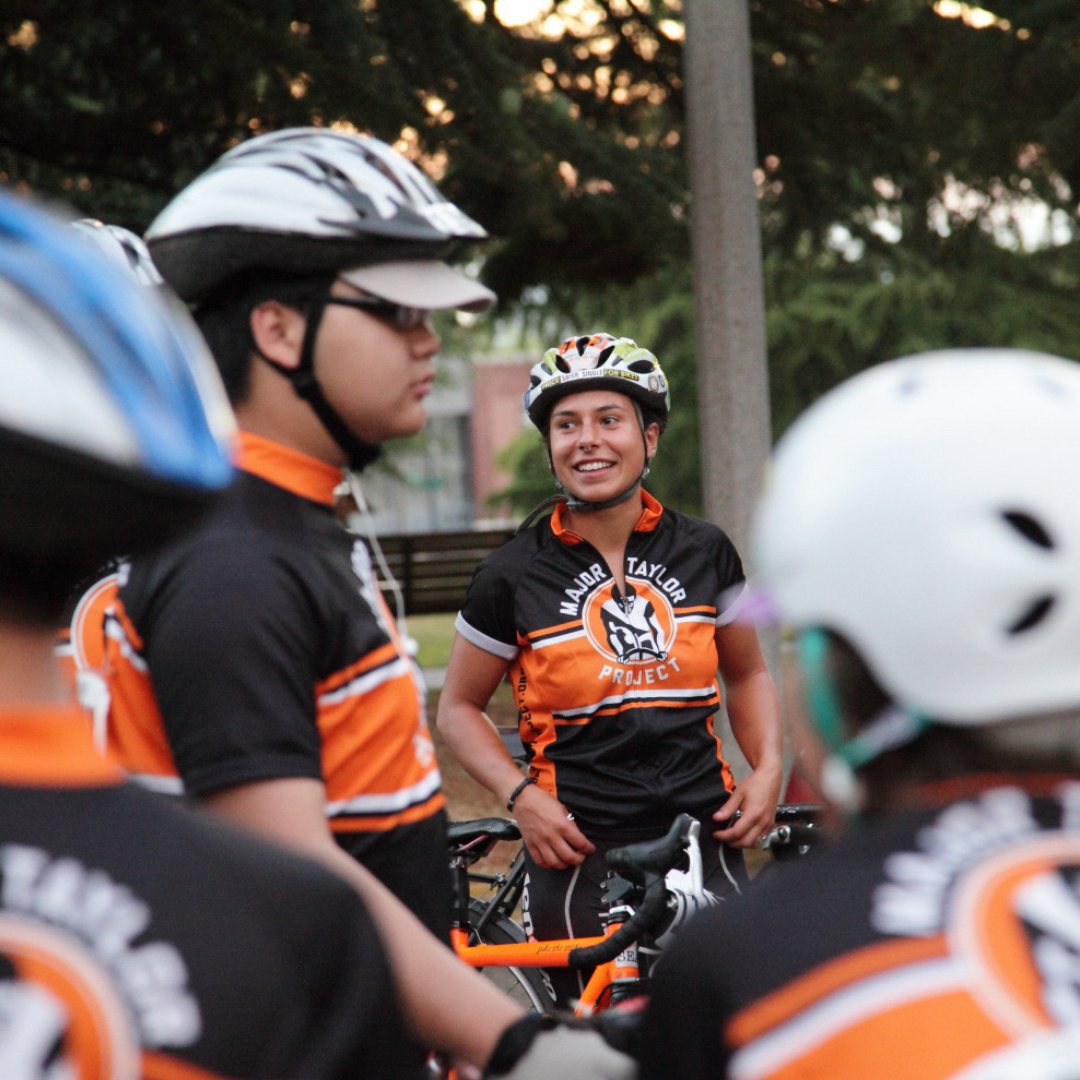 Han Chen, 22, became a ride leader in 2017 after being a student participant at Franklin High School. “I had a blast,” he says. When Chen was offered the opportunity to become a paid ride leader, he eagerly accepted. “I felt like I had the skills and personality to do a good job, and I also really believe in the MTP’s mission,” he says. “Being a ride leader is a great path for continuing to learn and develop. I am always learning and improving.”

One of his favorite memories as a ride leader came when he was leading a group of Foster High School kids up a steep hill. “In their minds, they had already categorized that hill as impossible to ride up,” he says. “They started saying things like, ‘I'm just going to walk up.’ ‘It's too steep.’ ‘It's impossible.’”

Chen flipped the script. “I came in with high energy and let them know to shift to their easiest gear, that they can do it, it's definitely possible.” All four students who attempted the hill made it up without stopping or walking. “For the rest of the day, those MTP students felt empowered and ecstatic. It was a memorable moment to witness a group of students break their disbelief and shift their perceptions of possibility in real-time,” Chen says.

For Vo, being a ride leader is a way to let youths know that bikes are a healthy, affordable and fun way to get around. “In an environment that heavily relies on motor vehicles, it is great to let them experience a different type of transportation,” he says.

Vo has taken a break from ride leading due to his hectic academic schedule (he is designing a gallery and work space for a Ballard photographer) but he plans to return next season.

“It is exciting to see the youths in MTP come to realize that riding a bike to places is more fun than riding in a car,” Vo says. “It’s always better to feel the wind on your face.”