Connecting trails on the Eastside to unlock transportation options

With your help, a connection from the East Lake Sammamish Trail to the Redmond Central Connector on the Eastrail is building a modern transportation system that works for everyone, regardless of how they get around. The new connection fills a key gap in the trails network from Issaquah to Kirkland and beyond, and offers five-star access to light rail in downtown Redmond.

Big news for two major Cascade trails priorities! The East Lake Sammamish Trail and the Eastrail are finally coming together, and it’s all thanks to your engagement and support.

Mile by mile, the Eastrail is connecting Snohomish to Renton by bike with stops in between. We’re advocating for the region to fast-track opening the 42-mile trail corridor so that people have more ways to enjoy the outdoors, get to school, work, or access transit. Thanks to investments from King County in the most recent parks levy, Eastrail will provide game-changing connectivity between five of the Eastside’s fast-growing cities.

To the east, the final segment of the East Lake Sammamish Trail (South Segment B) is on the home stretch with legal hurdles cleared earlier this year.

There’s a reason this trail has been a Cascade priority for 20 years: Once the East Lake Sammamish Trail is completed, it will make the crucial connection in our regional trails network from Seattle and the shores of Puget Sound to Snoqualmie and the foothills of the Cascade Mountains. Time and again, the community has spoken up to advocate for the completion of the East Lake Sammamish Trail. Connecting the Eastside cities of Redmond, Sammamish, and Issaquah, the trail is both a regional and neighborhood connector for people on bikes and on foot.

Now, thanks in part to your advocacy, the Eastside’s two major trails will finally connect! Downtown Redmond and the Redmond Central Connector were long separated by the SR-520 highway from communities along the East Lake Sammamish Trail; connecting two of the region’s most popular trails makes it easy, comfortable, and safe for people to navigate the trails network and get to light rail.

By making the short and intuitive connection between the East Lake Sammamish Trail and the Redmond Central Connector on the Eastrail, neighbors in Issaquah and Sammamish can get to work, shop, and visit Redmond and Kirkland by trail. A partnership between Sound Transit, King County Parks, and the City of Redmond will ensure the trail is open on day one of Eastlink light rail services to downtown Redmond in 2024. The connection is a textbook example of how trails and transit, when combined, can efficiently, affordably, and sustainably connect people to work, to school, or to the grocery store, regardless of age and ability. For first or last mile connections trails deliver more and better options. In fact, 80 percent of people who use transit walk, bike, or roll at the beginning or end of their journey. 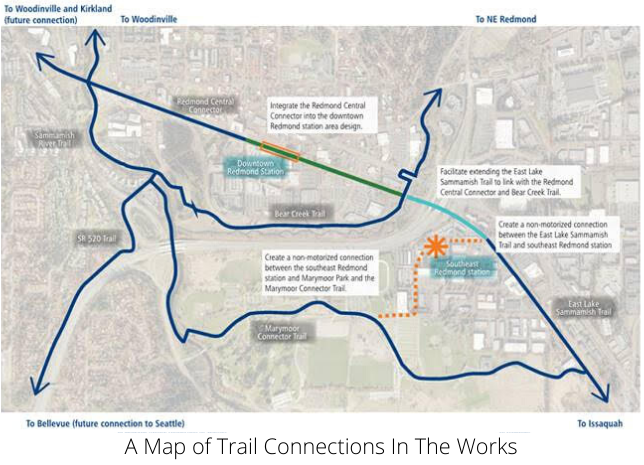 Connecting these two popular regional trails unlocks countless new transportation and recreation options: improving access to nearby trails including the Sammamish River Trail, Burke-Gilman Trail, and Bear Creek Trail. This new connection will extend the East Lake Sammamish Trail north from the trailhead at NE 70th St., guide trail users beneath the SR 520/202 interchange through two tunnels, and onto a new bridge over Bear Creek to seamlessly connect with the Redmond Central Connector on the Eastrail.

As East Link light rail extends into Redmond and Bellevue, Redmond, and eventually, Issaquah, (and across the region thanks to ST3) we’ll be advocating to ensure biking, walking, and rolling to light rail is seamless and stress-free. Sign up below now to hear about how you can help.

Sign up for our trails advocacy alerts and be the first to know about ways you can speak up for the trails network.

So you just signed up for a major riding event. Now what?