One Step Closer to Finishing the East Lake Sammamish Trail 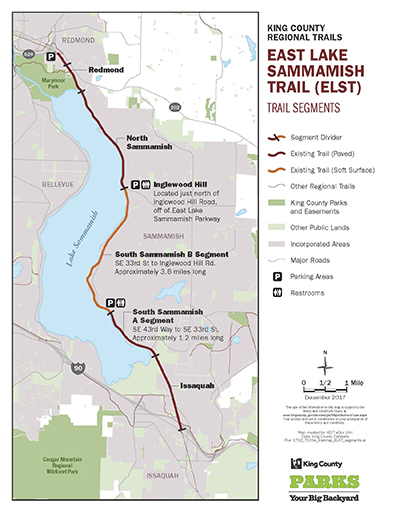 First, the gap: South Sammamish Segment B, stretching 3.6 miles from SE 33rd St to Inglewood Hill Road, has endured a seemingly never-ending series of appeals as lakeside homeowners, the City of Sammamish, and the county were locked in litigation. But in November, the Shoreline Hearings Board affirmed King County’s plans to build the trail in the way it was designed, with a few minor tweaks negotiated between the county and Sammamish. King County now has the green light to finish its trail design and is likely to submit for final clearing and grading permits from the city early this year.

Building on recent favorable rulings for railbanked trails, construction could start in late 2019 or early 2020. When Segment B is finished–with the help of people like you–we’ll finally be enjoying a safe, connected, and efficient route along the eastern shores of Lake Sammamish. About half a million people currently enjoy the trail each year.

As the work to complete the trail continues, some sections are getting a safety-minded refresh at key crossings. Near the southern terminus of the ELST, the City of Issaquah installed an undercrossing for the ELST beneath SE 62nd Street, so that people biking or walking will no longer have to stop or interact with vehicles as the trail is routed through a new tunnel beneath the road.

In addition to the tunnel, a spate of improvements to SE 62nd Street includes new bike lanes, street lights, curb ramps, and sidewalks. The project was jointly funded by Costco Wholesale Corporation, Washington State Transportation Improvement Board, Washington State Department of Commerce, City of Issaquah, plus telecommunications and power providers. Starting at 5am on January 29, the undercrossing (and road above) will be open for use.

2018 was a big year for regional trails on the Eastside, as we celebrated the opening of the 1.2-mile “Segment A” of the ELST, 13 miles of interim trail now open on the Eastside Rail Corridor, gathered at King County’s first Regional Trails Summit in October, and enjoyed a flurry of favorable rulings on railbanking late in the year.

As we grow the network of regional trails, your support makes this work possible.

Cascade is a trusted voice in policy and advocacy, and our work has resulted in over one billion dollars in new biking and walking investments statewide. Donor contributions allow us to build and maintain momentum for the Eastside Rail Corridor, East Lake Sammamish Trail, and other regional trails. Make a gift to help us continue creating safe bikeways for everyone.

Scenes from the Jan. 28 ribbon cutting: 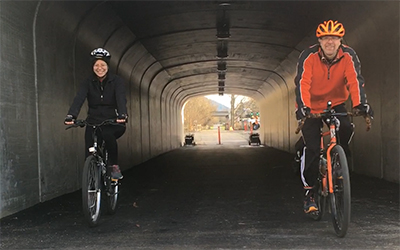 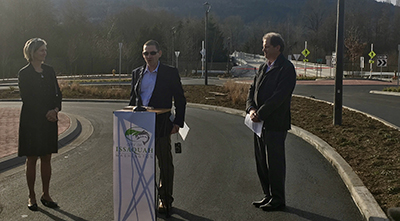 Joining Cascade’s Free Group Rides is as “Easy as Pie”