Plans to complete Pike and Pine up to Broadway are slated for completion by 2021.

In September 2017, we excitedly spread the news that had come out of the One Center City process: A package of transportation improvements for downtown Seattle that would move more people efficiently and provide much-needed safety updates for people biking and walking.

At the time we anticipated implementation of the 4th Ave. bike lane starting as early as Fall 2017.

Today, despite hundreds of caring community members rallying support for the full package of improvements, the One Center City partners announced a disappointing update: A delay in the 4th Ave. two-way protected bike lane until 2021. 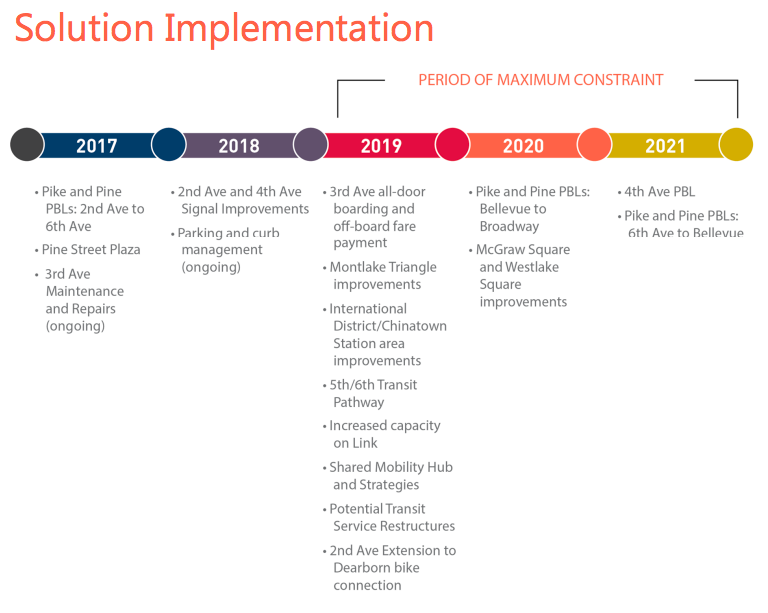 Thankfully, city leaders recognized the importance of a critical connection from the South end of 2nd. Avenue to Dearborn, and have announced it will complete that project by 2019. Plans to complete Pike and Pine up to Broadway are slated for completion by 2021, with improvements from Bellevue to Broadway by 2020.

Still, after years of advocacy, participation in a highly collaborative planning process, and anticipation of the build-out of this connection this year; it’s only fair to say that learning of the delay to 4th Ave. is difficult news for all those that have been waiting and fighting for safer places to bike downtown.

The multi-stakeholder Advisory Committee considered walking, biking, driving, and transit options holistically, resulting in a win-win solution that would keep everyone moving downtown. Specifically, the group’s near-term action plan would increase safety (decreasing collisions by 7-18%), move more people (10,000 more people per hour), and reduce travel times for everyone (30 seconds to 1 minute compared to the no action alternative).

Unfortunately the partners abandoned a critical part of the short-term plan that benefited people who walk and bike downtown. While many of the proposed transit investments, as well as the remaining bike connections will remain on track, we are concerned the delay of 4th was made without engaging the One Center City Advisory Committee.

The 4th Ave protected bike lane, combined with new bus lanes, would have moved more people, more reliably than today. In addition, it would have provided safer crossings and a wider buffer from moving vehicle traffic for people who walk on 4th Ave. A safe, connected, and convenient basic bike lane network would give many people another inexpensive option for getting around downtown. 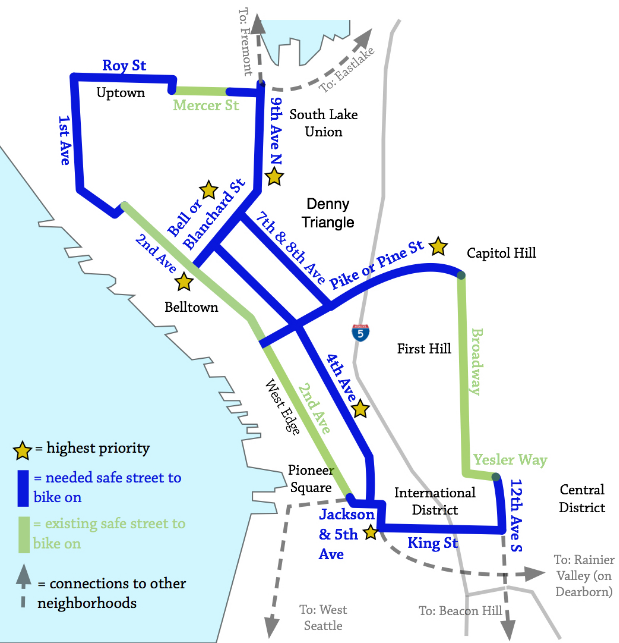 Our understanding at this point, is that the decision to delay is final. Our ask of  our city leaders now is: What can we do to make a basic bike network happen in the meantime?

We know that building basic bike networks moves more people — a critical need during the upcoming years of construction and congestion. This fact has been proven around the world in cities like Calgary, London, and Vancouver, B.C. The City of Seattle itself estimates that the number of people biking downtown would more than double if the downtown network is built out.

With the 4th Ave. connection now delayed, we would like to work with the city administration and Seattle City Council to swiftly implement the rest of the Basic Bike Network, as we have proposed with our partners, Seattle Neighborhood Greenways. Our current system of disconnected bike lanes has not reached its full potential because of its dangerous gaps.

The One Center City near-term action plan comes up for full review, with public comment, by Seattle City Council on April 3 at 2 p.m. Say you’ll join us at the Seattle City Council Transportation Committee as we ask the City to build the Basic Bike Network as quickly as possible!