The process, transcending the old bikes vs. transit debate, shows that multimodal planning and advocacy works

Following years of delay, people biking can expect to see major changes for the better in Seattle’s downtown this fall. On Thursday, Sept. 12, the One Center City committee made public its finalized “near-term” recommendations for updating downtown corridors, including a two-way protected bike lane on 4th Avenue, and as previously announced, protected bike lanes on Pike and Pine.

Both corridors will see bicycle improvements as soon as this fall. Pike/Pine layout work has already begun in the downtown core, from 2nd to 8th Ave. Also upcoming, but with a start date yet determined, 4th Ave.’s two-way protected bike lanes will be treated with paint and post separation, from Pike Street to Spring Street as a first phase. We will work to advocate for the north and south protected bike lane extensions of 4th Ave. later in 2018. 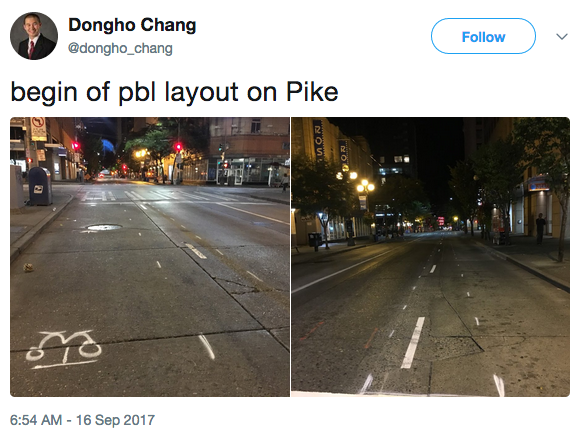 Though these improvements are long awaited, getting here wasn't easy. For both the agencies and the advocates, planning holistically for all modes of transportation required stepping away from business as usual.

Cascade and a coalition of mobility partners including Seattle Neighborhood Greenways, Transportation Choices Coalition, Feet First, Seattle Transit Riders Union and Seattle Subway, have closely followed OCC this year. Through many discussions, we developed shared values that emphasized outcomes like safety, efficiency, and reliability for all users, including a Basic Bike Network.

Despite the aspirational goals of OCC, at times we thought the process may fall apart. When negotiations over downtown corridors got heated this summer — to the old tune of “transit versus bikes” — our coalition of advocacy groups linked arms and demanded that our agencies get more creative. A letter we penned in July laid it out like this:

We are a group of advocates that both represent individual modes but also a shared vision for a multimodal Center City. We believe it is critical to have a safe and protected bike network that includes a facility on 4th Ave. AND a set of improvements that at a minimum maintain existing transit speed and reliability. We cannot in good conscience support one without the other.

The agencies listened and went back to the drawing board. In addition to recommending the planned 4th Ave. bike improvements, OCC also announced its plan will not just maintain, but improve transit service through downtown.

We stuck together, we emphasized outcomes over modes, and we succeeded. 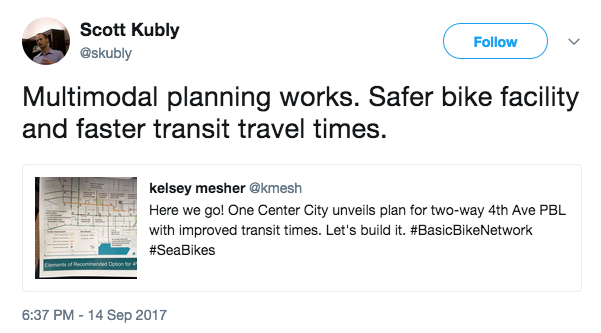 Cascade is grateful for our mobility partners, who work hard every day to make sure people in Seattle have safe, comfortable and convenient options for getting where they need to go. We are also grateful to the agencies, including Seattle Department of Transportation, King County Metro, Sound Transit and Downtown Seattle Association, for daring to break down major institutional silos in pursuit of a modern transportation system for our city.

The coordination is far from over. The partners must hash out implementation and financing details, in consideration of major development projects. Cascade and other advocates will continue to monitor these pieces, and of course, keep you updated and engaged along the way.

We are seeing the concept of a Basic Bike Network – fast implementation, with a period of testing and refining – come to fruition. Sustained advocacy is always needed to move the status quo, and with your support this year we are doing just that. Sign up today for our next series of Advocacy Leadership Institute workshops.