Biking, walking and transit are the preferred modes of Seattle Center City workers

Seattle added 45,000 jobs in the Center City since 2010, however 95 percent of those new workers have opted to travel to and from their positions by biking, walking and using transit — not driving alone. This is the major takeaway from Commute Seattle’s annual mode split data, which was announced today. Overall, this amounts to 70 percent of people choosing sustainable modes of transportation, and 30 percent driving alone.

Due to enormous investments in the transit system, especially LINK, transit takes the largest slice of the pie with 47 percent of the mode share, followed by rideshare (9 percent), walking (6 percent), other — such as telecommuting (5 percent) and biking (3 percent). 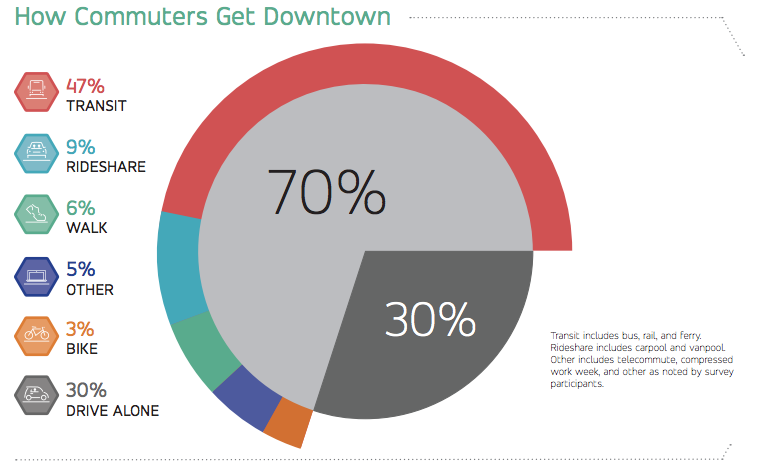 Bike trips have increased overall, with a net gain of 1,500 during the morning commute from 2010 to 2016; and the 3 percent overall mode share has stayed consistent over the last several years. However, we all know a huge opportunity to increase bicycle trips will be unleashed with the buildout of downtown’s Basic Bike Network.

According to Commute Seattle, companies with the most bike commuters included Allen Institute, Simply Measured, US NOAA and Google.

As a fellow advocate put it this week, “we already have the speedy, courageous” bikers, yet building a safe network will attract a new audience. We’ve seen evidence that building a network produces results. When Vancouver invested in a connected network of safe places to bike, they saw their mode share double to more than 10 percent.

Seattle is next. The support for implementing a Basic Bike Network is gaining momentum, with recent endorsements from the Seattle Bike Advisory Board, the Urbanist and the Seattle Bike Blog. If we follow in Vancouver’s lead and implement a Center City Basic Bike Network by 2019, we can expect a jump to 6 percent mode share, plus likely see a more diverse group of riders enjoying the benefits of biking to work downtown.