Calgary, typically known for its sprawl, recently made headlines for making a bold investment in bicycling. After conducting an 18-month “Centre City Cycle Track” pilot project, which featured a simple grid of connected and protected bike lanes, the Calgary council voted to make it permanent.

Calgary recognized the power of ensuring safe places to bike are connected — not just discrete and isolated islands (we love you Second Avenue Protected Bike Lane, but you’re so hard to get to). Because they took a chance on a downtown network, they achieved these outcomes:

One Center City, a holistic approach to planning for all modes downtown, is developing near- and long-term solutions to make the Center City work for more people whether you bike, walk, take transit or drive. We think a pilot network of protected bike lanes — modeled after Calgary’s pilot — is a fitting interim deliverable. This is why we, with our partner Seattle Neighborhood Greenways, are launching a Basic Bike Network campaign.

The Basic Bike Network campaign emphasizes the importance of connectivity, and highlights priority elements that will connect up existing bike lanes. The network effect will make biking downtown an attractive option for both new and experienced riders. A pilot like this would help the city of Seattle deliver on delayed promises outlined in the BIke Master Plan and Center City Bike Network, test corridors to aid in Center City planning, and all the while improve the flow of people to, from and within downtown.

Building bike networks produces results. Since 2010, Vancouver has built out a downtown protected bike network with connections to surrounding neighborhoods. And in the past four years, the city has seen its mode share for bicycling double.

Edmonton is now following in Calgary’s approach, with other cities following closely behind. It’s time that Seattle joins the party. A pilot Basic Bike Network delivered as part of its holistic One Center City process would truly make our city a transportation leader. 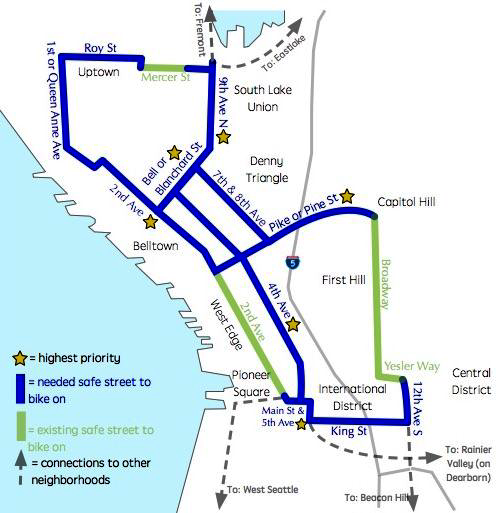 Currently, protected bike lanes in the Center City are located in discrete and isolated corridors. To activate Seattle’s existing bike investments, the city must build safe connections and achieve a network effect.