The League of American Bicyclists awarded new and updated ratings to bicycle-friendly communities last month. Seattle, which was was first awarded "Gold" in 2008, maintained its “Gold” status in this round of awards. 25 other cities joined Seattle as "Gold Bike Friendly Communities"; five communities earned the highest award, which is “Platinum.”

Check out how we stacked up with The League’s handy report card: 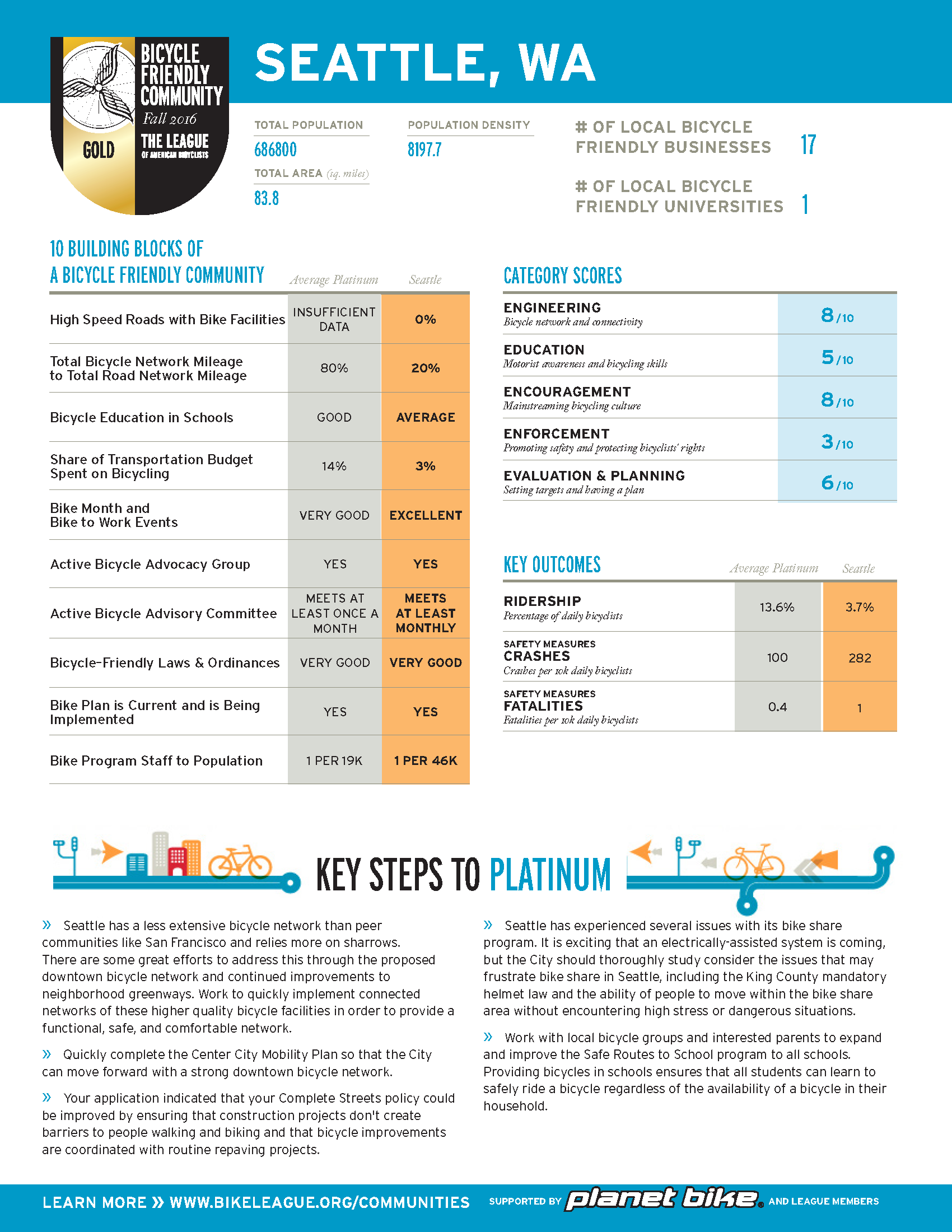 We are excited to be recognized for things like Bike Month and Bike to Work Day events, bicycle-friendly laws and ordinances, and Seattle’s committed network of community activists and participants. And, many of the “key steps to platinum” outlined by The League are already well underway at Cascade and among our partners in Seattle:

Key step: Seattle has a less extensive bicycle network than peer communities like San Francisco and relies more on sharrows...Work to quickly implement connected networks of these higher quality bicycle facilities in order to provide a functional, safe, and comfortable network.

What we’re doing about it: We have some excellent key corridors in place, such as Second Avenue, Roosevelt and Westlake, and now it’s time to connect them all up into an integrated network. Cascade advocated for a $5 million advance in Move Seattle levy money to help do just this.

Key step: Quickly complete the Center City Mobility Plan so that the city can move forward with a strong downtown bicycle network.

What we’re doing about it: Seattle is undergoing a multimodal transportation planning process called One Center City. We think this collaborative effort will pay off for bikes … but not for several years. In the meantime we are asking the city to consider testing a pilot “minimum grid” downtown network. It would keep people biking safer, and produce data for the One Center City planners to incorporate into final designs.

What we’re doing about it: The city of Seattle has responded to the work of community advocates and is now incorporating safety improvements and neighborhood input on its routine paving projects. Conversations about improving and communicating construction impacts are also underway between Cascade and SDOT.

Key step: Thoroughly study the issues that may frustrate bike share in Seattle, including the King County mandatory helmet law and the ability of people to move within the bike share area without encountering high stress or dangerous situations.

What we’re doing about it: We know that a key to bike share success — especially downtown — is a safe and connected network of safe places to bike. We’ve reached out to Seattle City Council, the Mayor’s office and SDOT with this message, as well as several other recommendations for making a bike share re-launch successful.

Key step: Work with local bicycle groups and interested parents to expand and improve the Safe Routes to School program to all schools. Providing bicycles in schools ensures that all students can learn to safely ride a bicycle regardless of the availability of a bicycle in their household.

What we’re doing about it: Cascade teaches bicycle education in every single Seattle elementary school, and provides a fleet of 600+ bikes for students to use. We’re also working with older youth through our Major Taylor Program.