Riding this year’s Kaiser Permanente Seattle to Portland Presented by Alaska Airlines will be a family affair for Kai Shih, Ingrid Chiang, and their two young sons.

Bicycling 206 miles over two days will be their longest ride ever, but they are training hard and preparing to rock STP family-style.

Before fully committing, the parents rode the Ride for Major Taylor and Chilly Hilly in 2021 with their sons to test the waters. 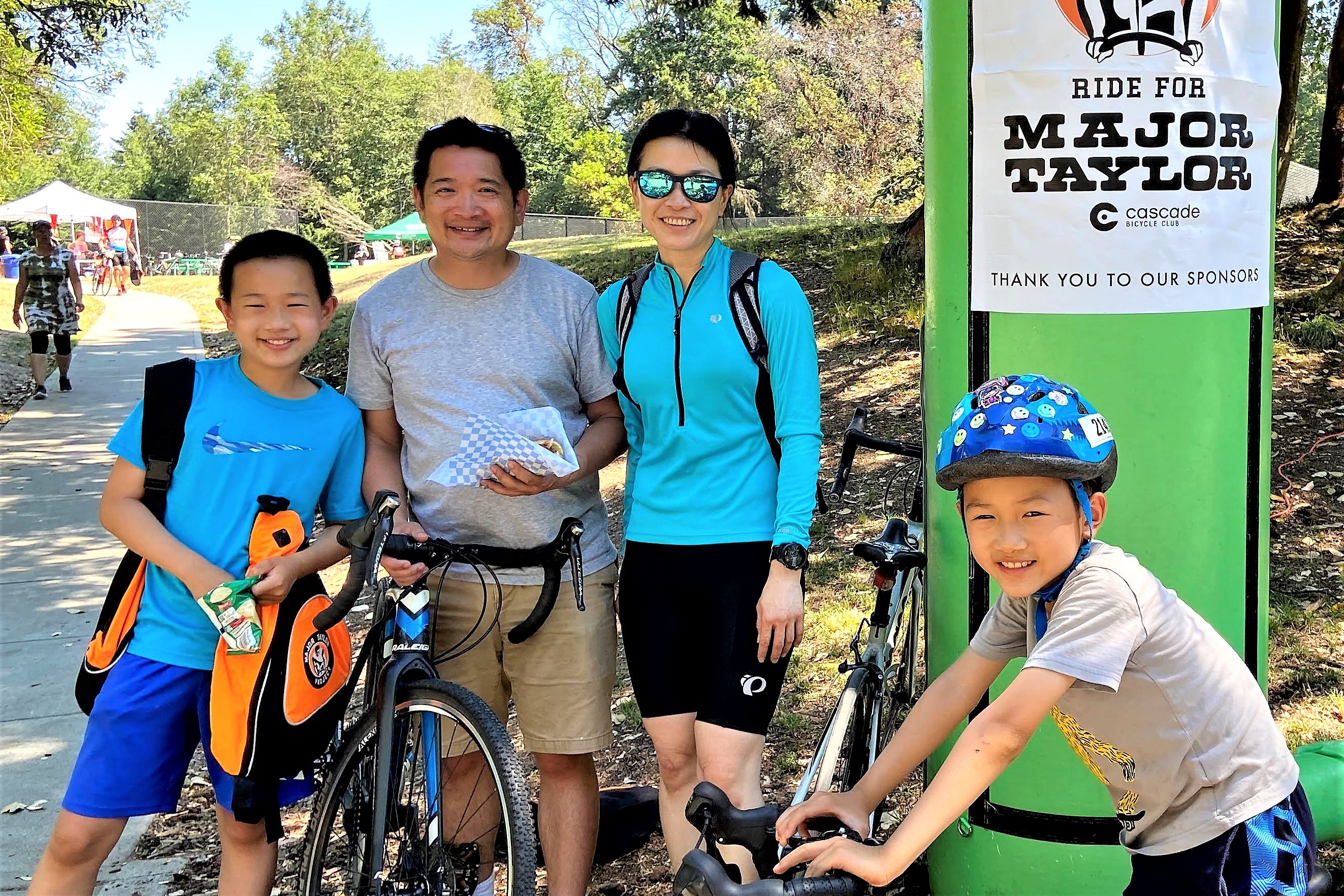 Of the up to 8,000 people who register for STP in any given year, fewer than 100 are kids younger than 13. Some parents pull their kids in trailers. Shih and Chiang are up for the challenge.

When the kids began attending a school in Seattle, seven miles away from their home in Medina, Chiang and Shih often joined their kids to ride home. “Then one of them got interested in mountain biking,” Shih says, “so we all got mountain bikes and started doing that.”

“So Friendly and Welcoming”

Last summer’s August edition of Chilly Hilly, which was delayed from its typical February date due to the pandemic, was a big inspiration for the family.

“When I was biking with my younger one on Chilly Hilly, he was so thrilled,” Chiang says. “People were alongside him cheering him on, and people would ring their bells for him.”

Shih calls himself the cheerleader of the family. “Of the four of us riding STP, I’m the least likely to make it,” he says. “On Chilly Hilly, I was behind them by many minutes.” 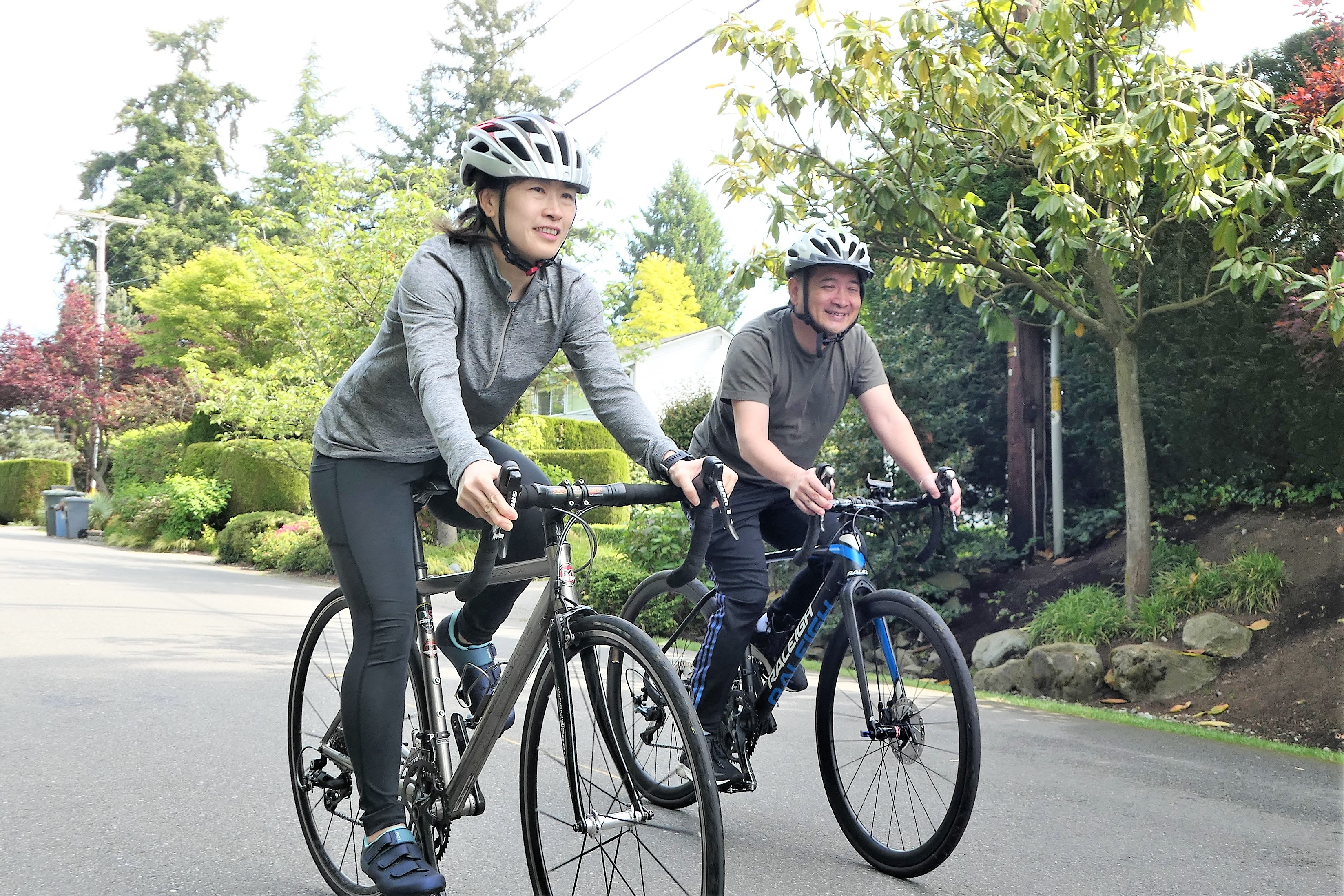 Chiang and Shih riding in Medina.

It was during Chilly Hilly that Shih became inspired to get involved with Cascade. He cramped up and had to stop. Community Education Manager Amy Korver, wearing her customary tutu, stopped to help him.

“Amy gave me tablets to put in my water to help with the cramping, and I thought it was so nice,” Shih says. “Everyone was so helpful. The way people treated us and our kids was so friendly and welcoming.”

One of the biggest difficulties is finding enough time to train as a family. “The hard part is that everybody is so busy. Getting a five hour block of time that works for all of us is challenging,” Shih says

On weekends, they do long rides to restaurants that they know the kids will enjoy. They recently did a 55-mile ride to Maltby to eat at the Maltby Cafe. A few weekends earlier, they rode 42 miles to the Tipsy Cow in Woodinville.

They prefer long rides on multi-use paths such as the Burke-Gilman or Sammamish River trails. Now the goal is to do some training rides of 60, 70, and 80 miles. “They don’t seem to be struggling at 55 miles,” Shih says.

“Supported rides are so much easier for families,” Shih says. “You don’t want to get stuck somewhere where the kids are like, ‘this sucks.’ You want them to have the best possible experience. It’s great when you don’t have to worry about running out of water, and when there are food stops.”

Shih wants to use his experiences as a bicycling parent to help Cascade become more appealing to families. “Cascade has made a lot of progress on its inclusivity goals, but we can do more for kids and families,” Shih says. 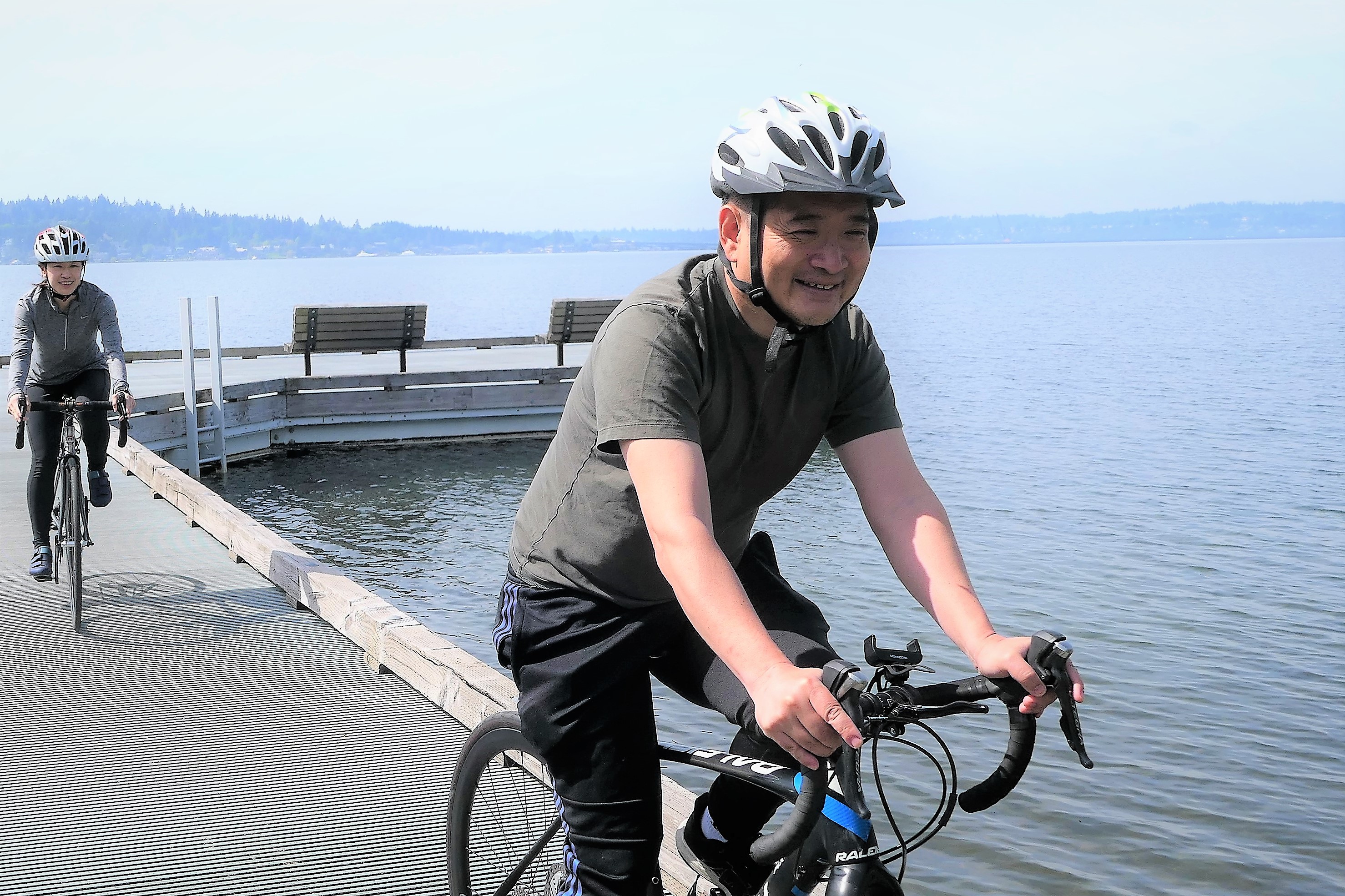 Shih is bringing some family style to Cascade.

“You get a kid to sign up, and you will get their parents to sign up also,” Shih says. “And if the kid has a good experience, the parents are going to love Cascade.”

Register for STP and say hello to Tai, Bei, Ingrid, and Kai!

Interested in riding with your kids? There are many options if you aren't up for a double century. Check out Cascade’s Family Biking resources for ideas on where to buy bikes and places to ride, or visit our Best Trails for Beginner Bicyclists page.