Marley Blonsky felt so strong after completing Cascade’s Chilly Hilly ride that she was ready for a second lap on the 33-mile course.

“I felt like I could go do it all over again,” says Blonsky, a member of the Cascade Board of Directors and the co-founder of All Bodies on Bikes.

Blonsky is a strong recreational rider and skilled ride leader with a powerful pedal stroke. Now she is working to build up her long-distance endurance as she trains for her first double-century, the 206-mile Kaiser Permanente Seattle to Portland Presented by Alaska Airlines, on July 16-17. Her goal: finish STP with a big group of big riders.

All Bodies on Bikes is partnering with Cascade to increase the diversity of people participating in Seattle to Portland as part of Executive Director Lee Lambert’s new STP Affinity Bike Clubs Partnership. In addition to All Bodies on Bikes, Cascade is partnering with multiple affinity based bike clubs and organizations that serve people of different races, ethnicities, genders, physical abilities, and body types.

All Bodies on STP!

Blonsky hopes to roll out of Seattle with a peloton of plus-size riders and her All Bodies on Bikes co-founder Kailey Kornhauser. At the halfway point at the end of day one on July 16, they want to have a group campout with their All Bodies on Bikes riders to share stories, enjoy a meal together, and support one another before heading out together the next morning for the final leg into Portland.

All Bodies on Bikes is a community rather than a club. It has 4,000 followers on its private Facebook group, and 10,000 followers on Instagram. All Bodies on Bikes grew out of Blonsky’s and Kornhauser’s desire to provide rides, resources, and a welcoming community to fat people who have been previously ignored by the bike industry. They encourage everyone to feel proud of their bodies, and they are sparking change in the wider bike culture about what a bike rider looks like. Part of that effort is to destigmatize the word fat and remove its negative connotations.

Blonsky and Kornhauser both identify as fat, and they intentionally use that word to describe themselves. "It is our goal to reclaim this word as a neutral descriptor of our bodies, similar to how we use 'blonde', 'short' or 'tall' as descriptive words," Blonsky says. "Words only have the power we give them."

As Kornhauser says in the short film "All Bodies on Bikes," created by Shimano: "People associate negative feelings with the word fat. People think that fat means lazy, or ugly, or undesirable. But really fat is just a descriptor of our bodies, so I try to use that word just to describe myself and take the word back in what it means about my body, but leave those negative associations behind."

Thanks to their efforts, bike brands including Pearl Izumi (which sponsors Blonsky) have begun offering larger sizes in bicycling apparel. Bike companies and events organizers consult with Blonsky on the design and marketing of bike clothing and inclusive messaging. The initiative has been so successful that Blonsky quit her corporate job last year to work full-time as a bike brand ambassador. 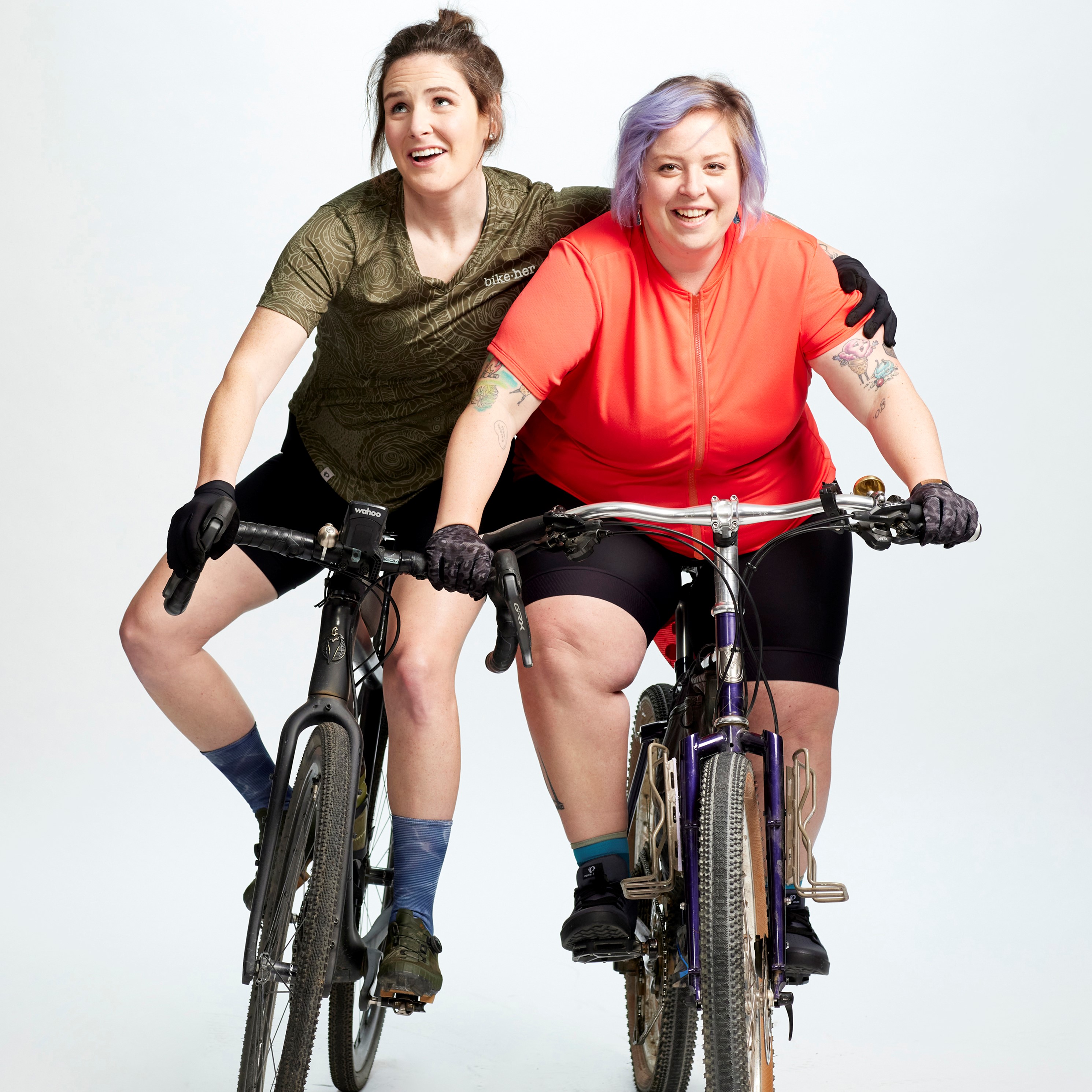 Marley and a friend in a recent Pearl Izumi photoshoot. Photo courtesy of Pearl Izumi.

All Bodies on Bikes holds group rides and gets requests from across the country to hold events. Blonsky and Kornhauser hope to scale up their offerings in the future, with regional chapters in different parts of the country, and a ride leader training program similar to Cascade’s Free Group Rides certification.

“Nebraska, North Carolina, Arizona, New Mexico–we get asked all the time: ‘Can you come lead a ride in my town?’” Blonsky says. “This has grown bigger than our wildest dreams.”

When Blonsky rides STP this summer, she will be returning to Seattle as an Arkansan. She recently won a prestigious relocation grant from the Northwest Arkansas Council to move to Bentonville, a small city of 55,000 that is undergoing a renaissance thanks to big investments in bike trails, bike lanes, and the outdoor lifestyle.

Blonsky is excited for a new adventure after 18 years in Seattle. She has visited Bentonville just one time, during last fall’s Cyclocross National Championships, but she was “blown away” by Bentonville’s bike-friendly culture. “The whole city and region are embracing bicycling as an economic engine.”

The lower cost of living in Arkansas gives Blonsky the financial freedom to build her career as an inclusivity ambassador. She will also have trails just a short ride from her door, which means she can improve her mountain biking–and get in more endurance training for the back-to-back 100-mile days of STP.

Blonsky’s goal is to continually improve, inspire, teach, and drive change and acceptance. “My sponsors don’t pay me to win races. They want me to participate and represent.” 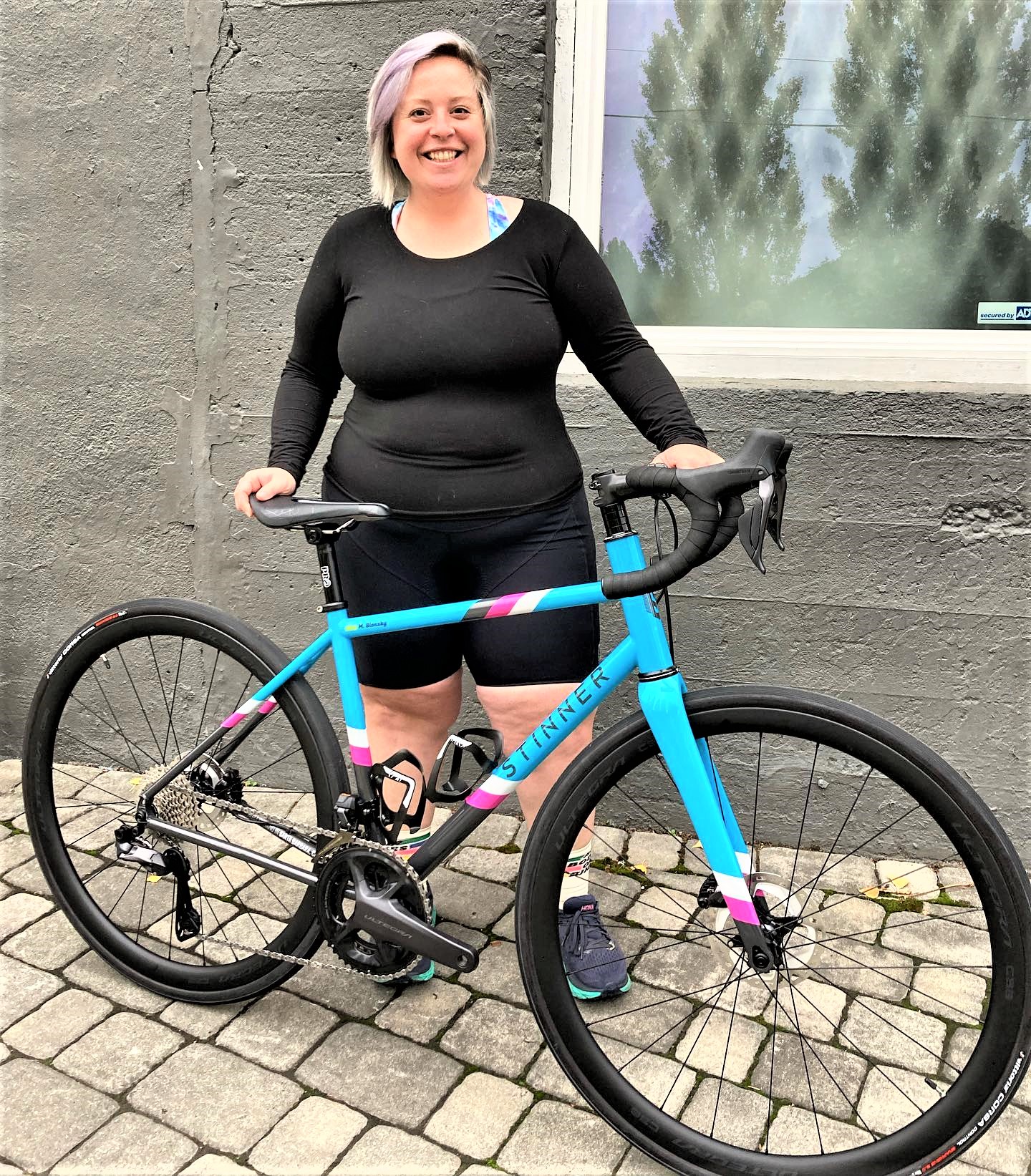 We recently featured Gruppetto Cycling and its effort to invite more Filipinos and people of Asian and Pacific Islander descent to ride STP. In coming weeks we will highlight other bike groups that are joining the STP Affinity Bike Clubs Partnership. Partner organizations receive discounted STP registrations to encourage members of their community to sign up.

“We want to have the most diverse and inclusive STP ever,” Lambert says. “People who have never ridden STP think 200 miles over two days is crazy. But the beauty of bicycles and of STP is that you can cover a lot of ground if you just roll along slowly and steadily.”

“STP isn’t a race, it’s a supportive big group ride with a tremendous sense of camaraderie that fuels your spirit,” Lambert add. “As a four-time finisher, I am proof that you can finish STP if you put in some training time and commit yourself.”