Last fall, Rachel Schaeffer joined Cascade as our new Policy and Advocacy Manager with a focus on Seattle. We recently sat down with Rachel to ask her about biking in Seattle, and top issues Cascade is advocating for this year.

Q: What brings you to Cascade as the Seattle Advocacy & Policy Manager?

Prior to joining Cascade, I was the program manager for Feet First, a statewide pedestrian advocacy organization. I enjoy working in active transportation because the ways our cities are designed, and how we navigate them, has a big influence on our health, so I get to bring my background in public health to this work. With biking, some of the connections are obvious– physical activity is good for you! When you broaden the conversation to making biking more accessible for entire communities, you get into cleaner air from fewer cars, safer streets, improved social connections in neighborhoods–and that’s where you can make big changes in population health.

Q: In general, how would you define the state of biking in Seattle?

In short, it depends. The experience of biking in Seattle varies based on your identity, where you live, and what your comfort level is for biking alongside fast-moving traffic. I have friends who ride everywhere and feel comfortable doing so. Yet, I hear from others that the gaps between bike lanes mean they just don’t feel safe. But things are improving. Last year alone SDOT installed seven miles of bike lanes, so we’re making progress towards our vision of a connected, protected citywide bike network that is comfortable for people of all ages and abilities.

But there’s more to do, namely in Southeast and West Seattle, where protected bike lanes are far fewer, and car-centric infrastructure continues to make biking and walking not only difficult, but dangerous. People living in places like the Rainier Valley are still at higher risk of traffic violence simply by trying to walk and bike to places they need to go. The latest data from 2020 daily bike volumes (see graph below) shows just how important it is to build high quality bike infrastructure. Those large blue circles match up with the locations of the city’s protected bike lanes, and they also connect to destinations people need to get to. The lack of such circles south of downtown is striking. People in South Seattle deserve to feel safe biking, but currently there are not enough safe and connected bike lanes to make that a reality. 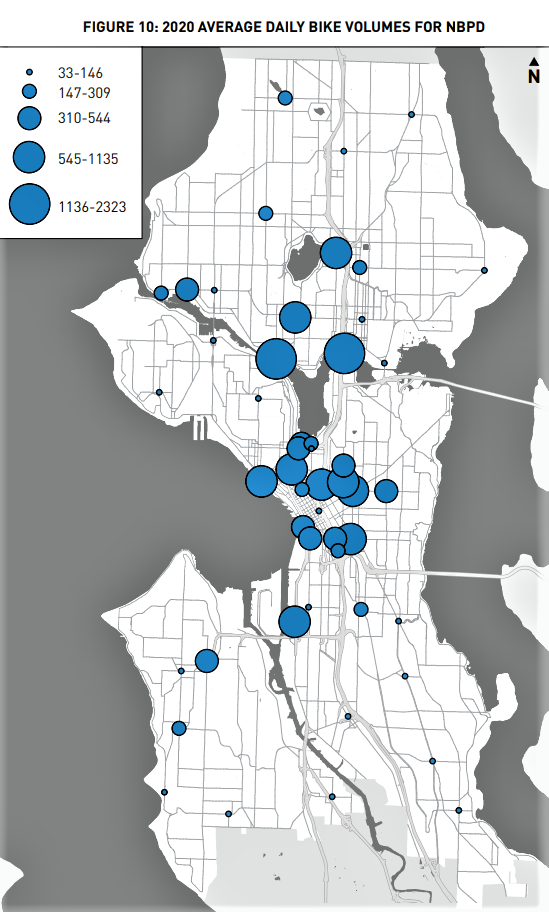 Recognizing that a safe bicycling environment is not just about infrastructure, Cascade is continuing to work with partners on the King County Board of Health’s helmet law repeal. We’re hopeful that the repeal will be confirmed in early 2022. Removing this law that is enforced selectively, disproportionately affecting our Black, Indigenous, People of Color and unhoused neighbors, is one way we can help eliminate barriers to biking.

Of course, continuing to build out the bike network is also essential for encouraging more people to get around by bike. Several projects that are planned for this year fill critical gaps south of downtown and in existing trail networks:

It’s important to note that we can’t do this work alone. It takes working with our organizational partners and countless efforts from neighbors across the city to show up, speak out, and keep pushing for these projects to be planned and implemented. Without the help of activists and partners, we would not see the progress that’s been made so far on creating a bike network that works for everyone.

Q: You mentioned specific bike network projects. Can you give us a refresher on how it is decided where bike improvements will be made, and when?

The process is changing. In the past, bike improvements were planned and implemented through the city’s Bike Master Plan (BMP), which establishes the projects and programs that build out Seattle’s bike network. It was developed with input from the public, who voiced their desires for safe, flat, and connected bike routes in key areas across the city. Many of these projects were funded by the Move Seattle Levy, which voters approved in 2015.

Starting this year, the City of Seattle is doing something new by creating the Seattle Transportation Plan, which will replace the Bike Master Plan and will include planning and funding for all bike, walk, freight, and transit initiatives citywide. With all of these modes integrated into one blueprint, this plan must prioritize biking, walking, and transit above motor vehicles. Just like last time, many of these projects will be funded by a new Transportation Levy. Cascade will be working over the next two years to make sure it is re-approved by voters so that this new transportation plan advances our vision of a citywide bike network. 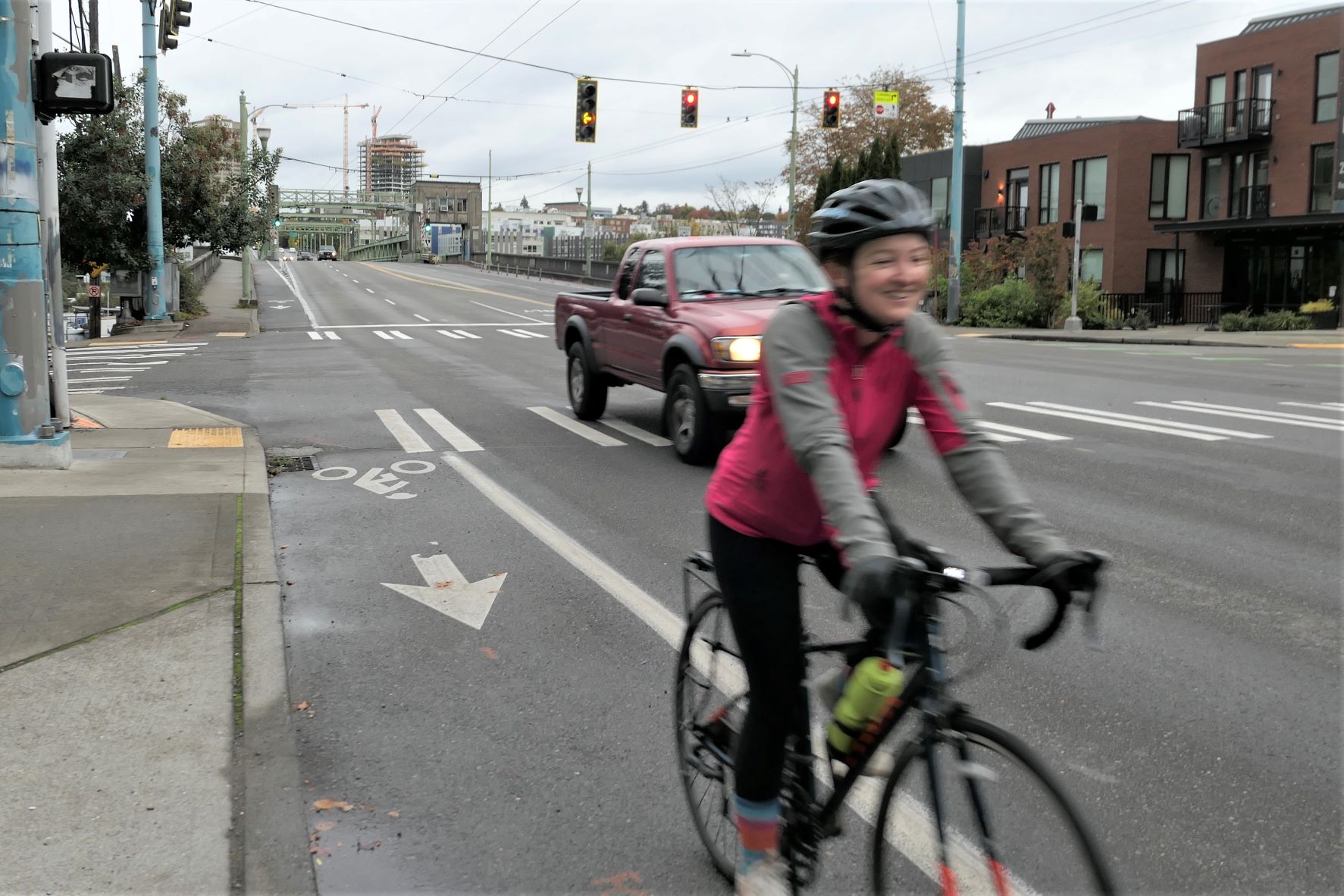 Q: What are the values that shape Cascade’s advocacy priorities in Seattle?

We believe these three core values are central to ensuring that any improvement to bicycling serves the people of Seattle: safety, equity, and connectivity.

Safety from being hit by a motor vehicle is a basic right, and it’s crucial for encouraging more people to bike. Unfortunately, fatalities and serious injuries to people walking and biking were higher in 2021 than in any of the last 15 years. This is an unacceptable trend and we must continue to call attention for a safer biking environment.

Equity recognizes that people in Southeast and West Seattle bear a disproportionate burden of air and water pollution, negative health outcomes, and serious injuries and deaths while walking and biking due to a history of disinvestment. The city must focus its investments in the neighborhoods that have been excluded, and where safe bicycling infrastructure is lacking, to create a more equitable bike network that serves all city residents.

Connectivity means creating safe routes that link neighborhoods and enable people to reach important destinations by bike–key to making bikes a more practical transportation choice for everyone. It also requires linking current bike routes to one another, rather than leaving gaps in the network that drop people onto dangerous streets or direct them away from their desired destinations.

Q: Switching gears a little, what aspect of this work keeps you up at night?

Safety is the biggest barrier people name as to why they don’t bike more in Seattle. And that’s not just theoretical. Earlier this month a person was killed while biking in the SODO area, and it didn’t even make the news. The fact that so many of us who bike, walk, roll, and take transit regularly experience dangerous situations while getting around the city is unacceptable. For many people traveling in these ways, it is their only option–they either can’t or don’t drive, and so are forced to deal with unsafe streets on a daily basis. Seattle has made strides in recognizing this unequal access, but there is still so much more to do to get Vision Zero back on track.

This year we’re advocating for the city to use every tool it has to make significant progress on increasing safety by:

Q: If we care about better biking, how can we get involved?

Big policy change is coming to Seattle in the next couple of years, steered by a new mayor and a new (as yet unrecruited) SDOT director. This spells opportunity, but also the need for bike advocates to be ready to engage and speak up at public meetings and when public comment opportunities arise. Sign up here to be the first to know about opportunities for public input on these new plans for bike projects and funding.