Martin Luther King Jr. said that budgets are moral documents; we fund what matters. To date, our city leaders have woefully overlooked their ability to stem the disturbing trend of increasing traffic deaths and serious injuries on our streets.

As the Seattle City Council looks to adopt a budget for 2022, there are two separate proposals to increase funding for street safety projects. First, the city can dedicate new Vehicle Licensing Fee revenue. Second, there is potential funding from a proposed Commercial Parking Tax increase. We support these proposals as the bare minimum the city can do to address the reality that 2021 has been the most deadly year for people biking and walking since 2006.

Together with other safe streets advocates, we are pushing to change our backwards slide. We’re advocating for Council to approve two funding sources to increase Vision Zero to its highest levels yet. We’re also supporting amendments from City Council champions of biking and walking to better align the budget with our values and priorities:

Every year, Council sprints through a budget process between September and November, which involves taking the mayor’s proposed budget and digesting, adjusting, and finally approving a budget that reflects the Council’s role as “purse string” holders.  After several weeks of proposed amendments, the Council’s “balancing package” will be unveiled on Nov. 12. Which means that now is the time to tell the Council to fund safety first.

What exactly does Vision Zero fund?

Vision Zero is responsible for safety projects you may have already seen around the city, like the protected bike lanes on the 12th Ave Jose Rizal Bridge, and for future projects like making 23rd Avenue safer to walk along and access transit. The program prioritizes safety and equity to make streets more accessible for all, but with just a few million dollars per year in the program to date, we have yet to provide meaningful funding to accomplish these goals.

How big of an issue is safety?

No one should have to worry about whether they’ll make it home safely. And yet, that’s the reality for many people walking and biking in Seattle. Data thus far from 2021 shows a disturbing trend; already 26 people have been killed walking and biking on Seattle’s streets. It’s the most deadly year since 2006 on Seattle streets--but it’s not just the numbers that are problematic. Traffic violence, like so much else in our city, is disproportionately killing and harming people of color, people with disabilities, seniors, low-income people, and unhoused people. This is both unacceptable and preventable. When it comes to traffic deaths and serious injuries, zero is the only acceptable number. 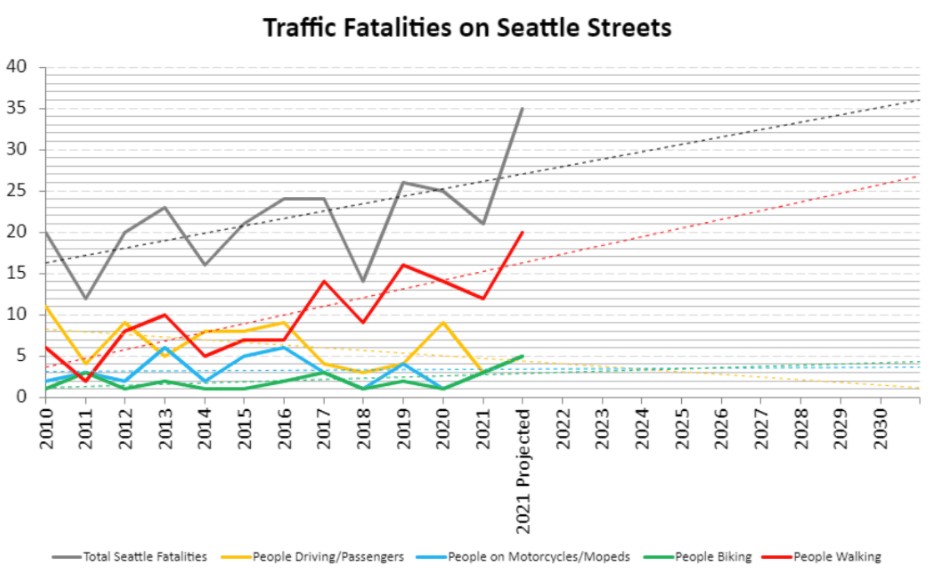 The city is moving in the wrong direction towards achieving its goals of eliminating traffic fatalities and serious injuries in Seattle.

Quick Tips to Incorporate More Biking in Your Daily Life