The new 2.5 mile section of Eastrail between Bellevue and Renton highlights the potential of trails as neighborhood connectors, transportation corridors, and community spaces. Check it out! And help us advocate for linkages that connect Eastrail to more South King County communities and regional trails.

Riding on a fresh new trail is a rare treat. New views, smooth riding. That’s all available with the new section of the Eastrail between Newcastle Beach Park in Bellevue and the Seahawks training facility in Renton. The 2.5-mile section of paved trail officially opened for biking, walking, and rolling in November following a modest ribbon cutting event.

Much of the new trail parallels the existing, and narrower, Lake Washington Loop Trail, which will close soon to facilitate an Interstate 405 widening project. The new trail is 12 feet wide, plus buffers, and includes three feet of packed gravel so that people walking and running have an option that’s easier on their knees. The trail, which will eventually extend 44 miles between Renton to Woodinville, is wide enough to accommodate users of all ages and abilities.

A first look at the trail… 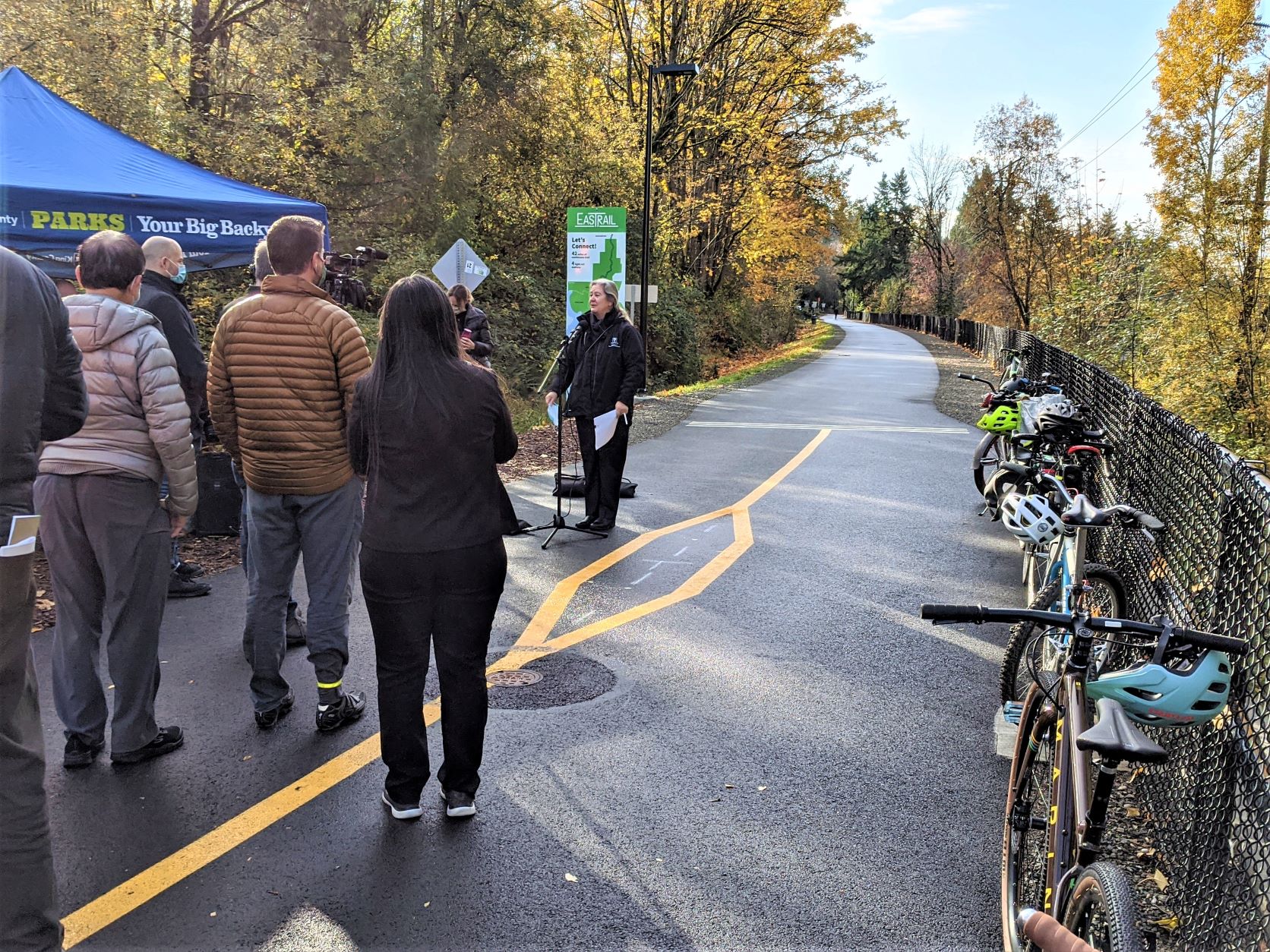 A bluebird fall day was the perfect weather to open this segment of trail to the public. A small group of government and community partners, including Cascade Bicycle Club, WSDOT and the city of Bellevue enjoyed a spin on the trail. WSDOT was a meaningful funder for this trail segment. 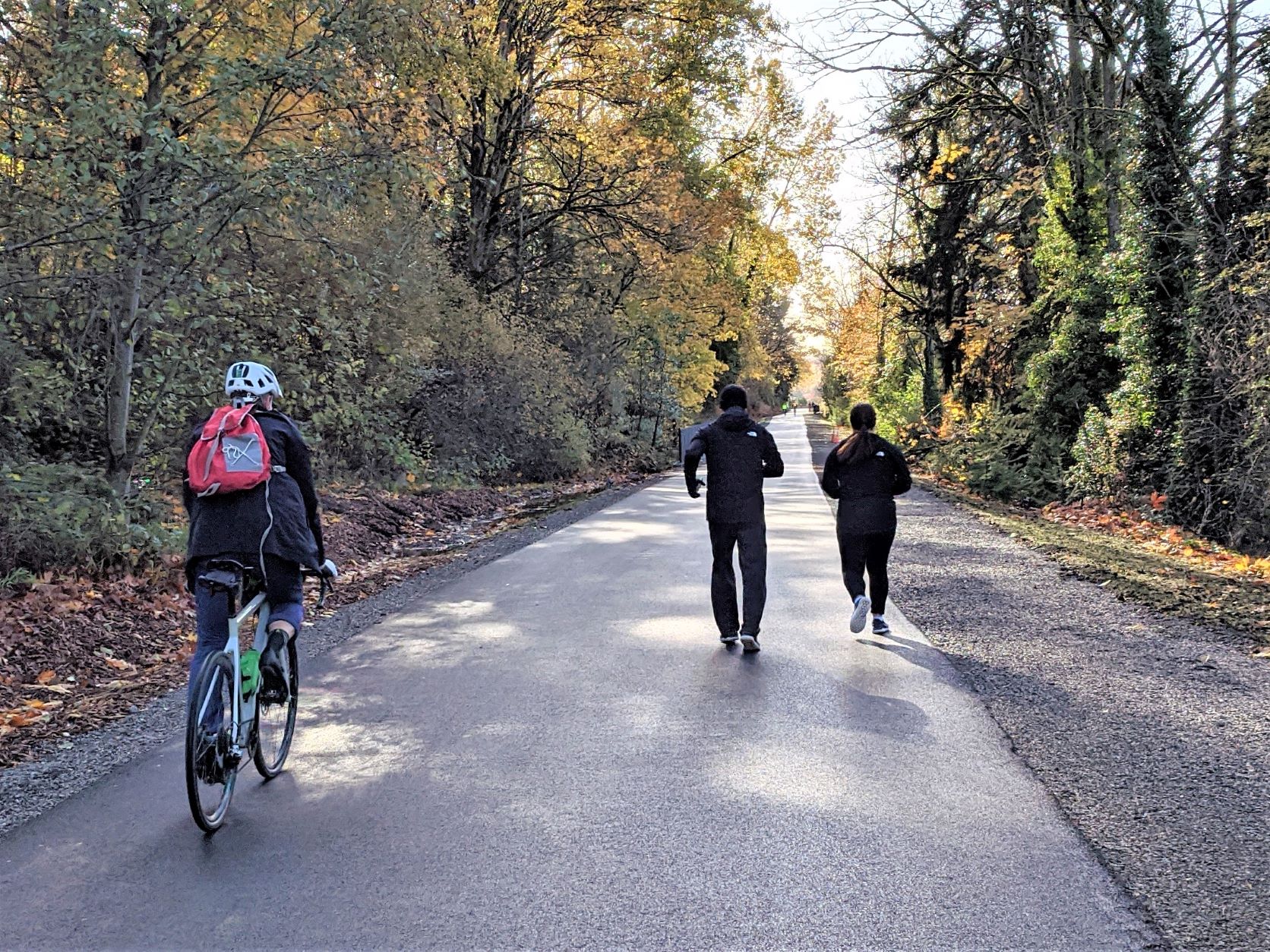 The trail is 20 feet wide, including a three-foot-wide shoulder. This is the widest King County Regional Trail. The width is a reflection of the numbers of users and range of uses anticipated. Given that the Lake Washington Loop, a section of Eastrail, is a heavily used bike route, high bike use is expected. 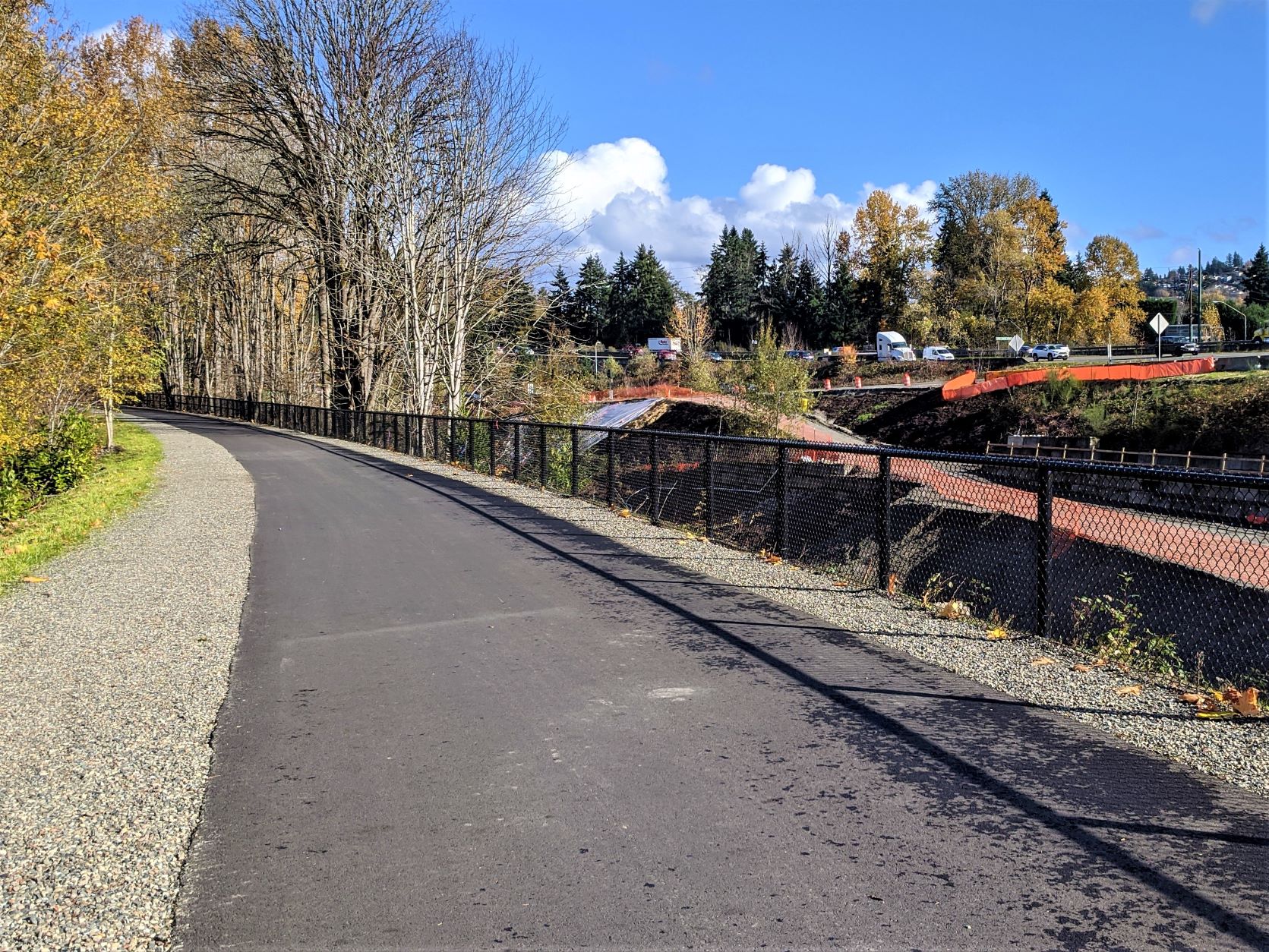 Trails are transportation. The new trail, with the old Lake Washington Loop trail in the background, alongside the clogged I-405 highway. 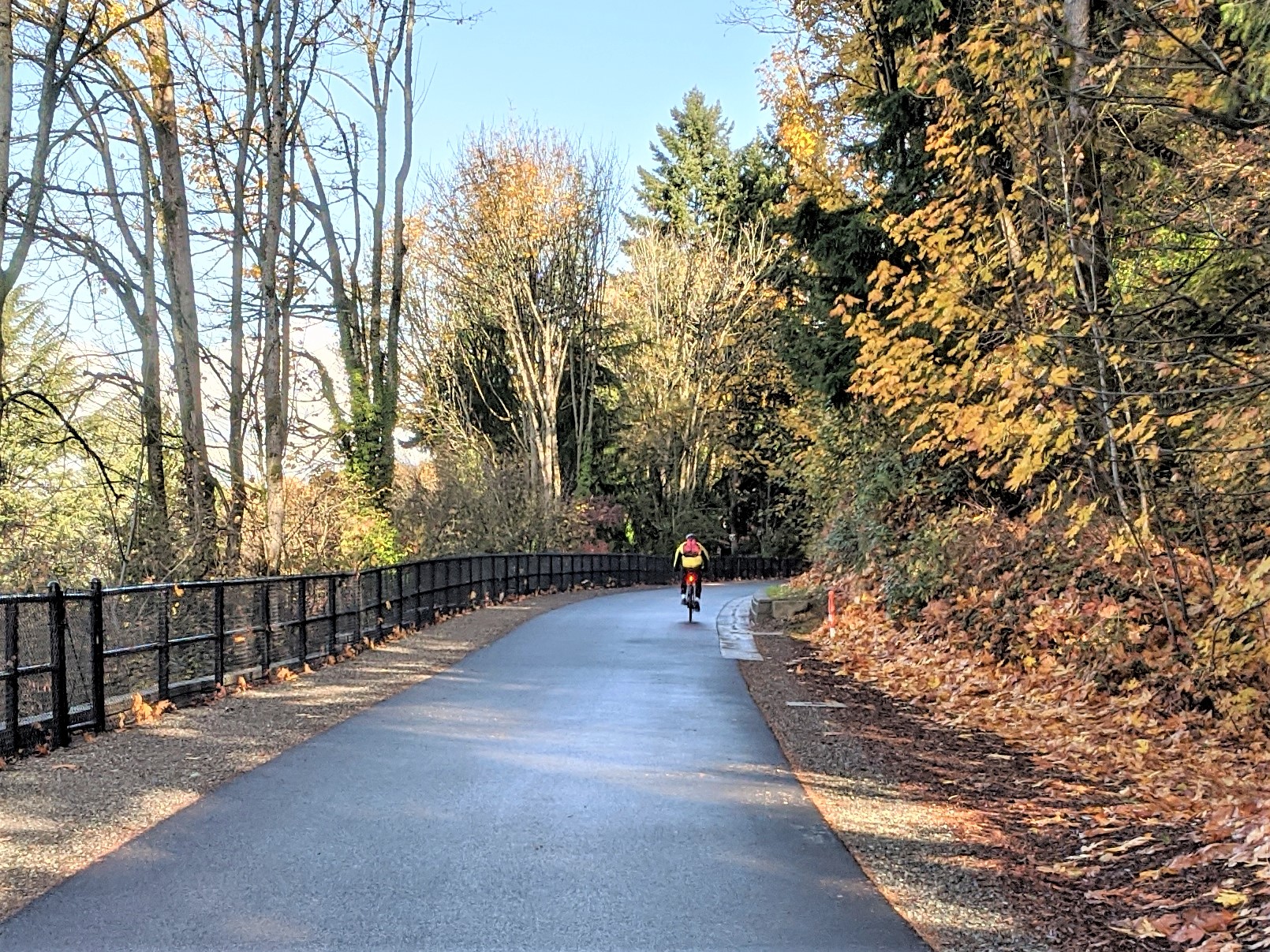 Serenity awaits! Usage will doubtless increase fast as people learn that the trail is open. In the meantime, it’s just bicyclists and the trees along some stretches. 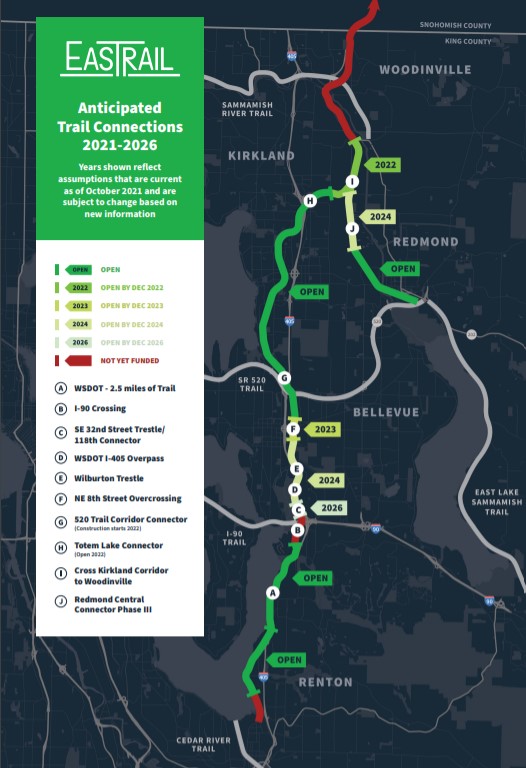 The trail itself is not the only thing worth exploring - trail access to Newcastle, Kennydale and Gene Coulon beach parks are also enhanced and seamless.

Progress abounds on the Eastrail -- but there is more to do

Trail owners are making Eastrail a reality--fast--with new sections of trail seemingly opening annually. However, big hurdles like crossing I-90, retrofitting the epic Wilburton Trestle, and building the trail out through Bellevue take time and money (although with the exception of crossing I-90, the funding is now all in place to complete the main spine between Woodinville and this new trail segment in Renton).The trail route between Kirkland and Woodinville is anticipated to open in 2022 as a packed gravel trail.

Connecting the trails in South King County offer so much potential

Leaving the new trail segment in the proverbial rear view mirror, and heading south on the packed gravel to Gene Coulon Park in Renton, bicyclists come to a hard stop about a mile down the trail. Sign posts cue you: Trail Ends. It’s the end of the line for people on bikes, as the railroad tracks start up again.

There’s a plan to purchase the right of way here, to be able to punch the trail through, further into Renton. And that would be a boon not only for locals wanting improved access to Eastrail and the communities it runs through, but for a couple of other well-used regional trails too. What if they all connected? The Cedar River trail connects from the shores of Lake Washington in Renton to Maple Valley, along the Cedar River watershed. The Green River and Interurban trails also terminate in Renton: the Green River heads north to Seattle, and the Interurban stretches south to Kent, Tukwila, and Auburn. Knitting these gaps together looks easy on a map, but if it were easy it would be done by now!

That’s why advocacy groups like Cascade Bicycle Club and others are highlighting new trails and the possibilities they open up.. Every day of the year, we connect with local officials about the priorities for people biking, walking, and rolling. Because no matter how glorious the new segment of Eastrail is, it’s still an island if you’re the type of rider who’s only comfortable biking on protected bikeways and trails (like 60% of us).

Sign up to learn more about our trails advocacy, especially if you’re excited about getting involved in making your community better connected by bike. We’ll be announcing new opportunities to engage in early 2022, so make sure you’re among the first to hear about updates on local trails. 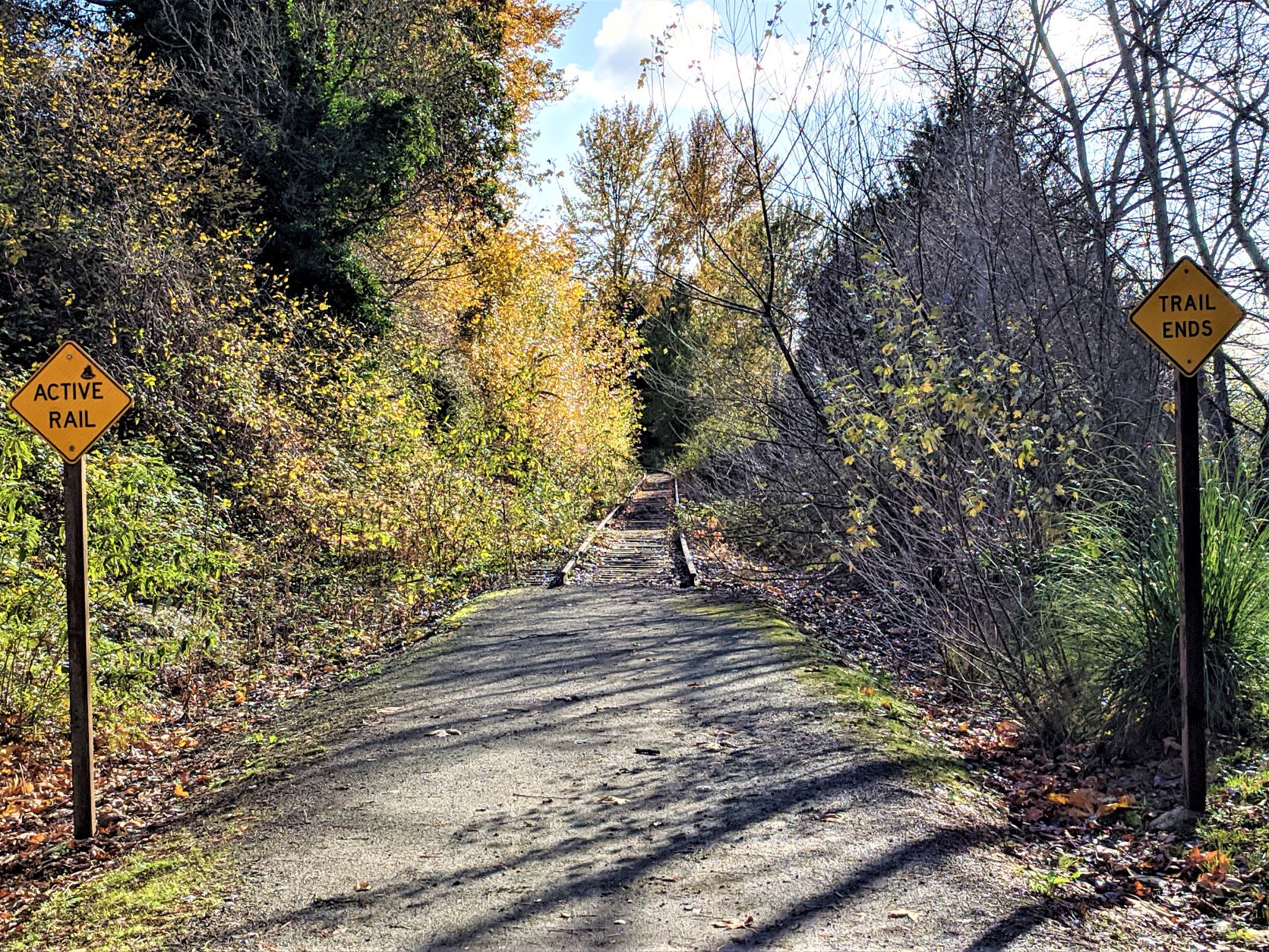 End of the line. People on foot can walk through Gene Coulon Park to complete the journey to Renton’s downtown (people must walk their bike if they too choose this route). But the trail ends here for now, where rail lines start up again.