Rain or shine, Brian Zenk commutes on his electric bike five days per week from his home in West Seattle to his job at the Pacific Northwest Ballet downtown. It’s one of the best parts of his day.

“When they closed the West Seattle Bridge the first thing I did was buy an e-bike,” says Zenk, wearing a bedazzled helmet that resembles a glittery disco ball. “E-bikes are great. They allow you to get outside and exercise but they flatten the hills.”

Zenk was among the many bike commuters who stopped at a Commute Seattle event held Tuesday along the West Seattle Bridge Trail, where Cascade Bicycle Club joined the Seattle Department of Transportation, Spin scooters, and other nonprofits to promote car-free commuting. 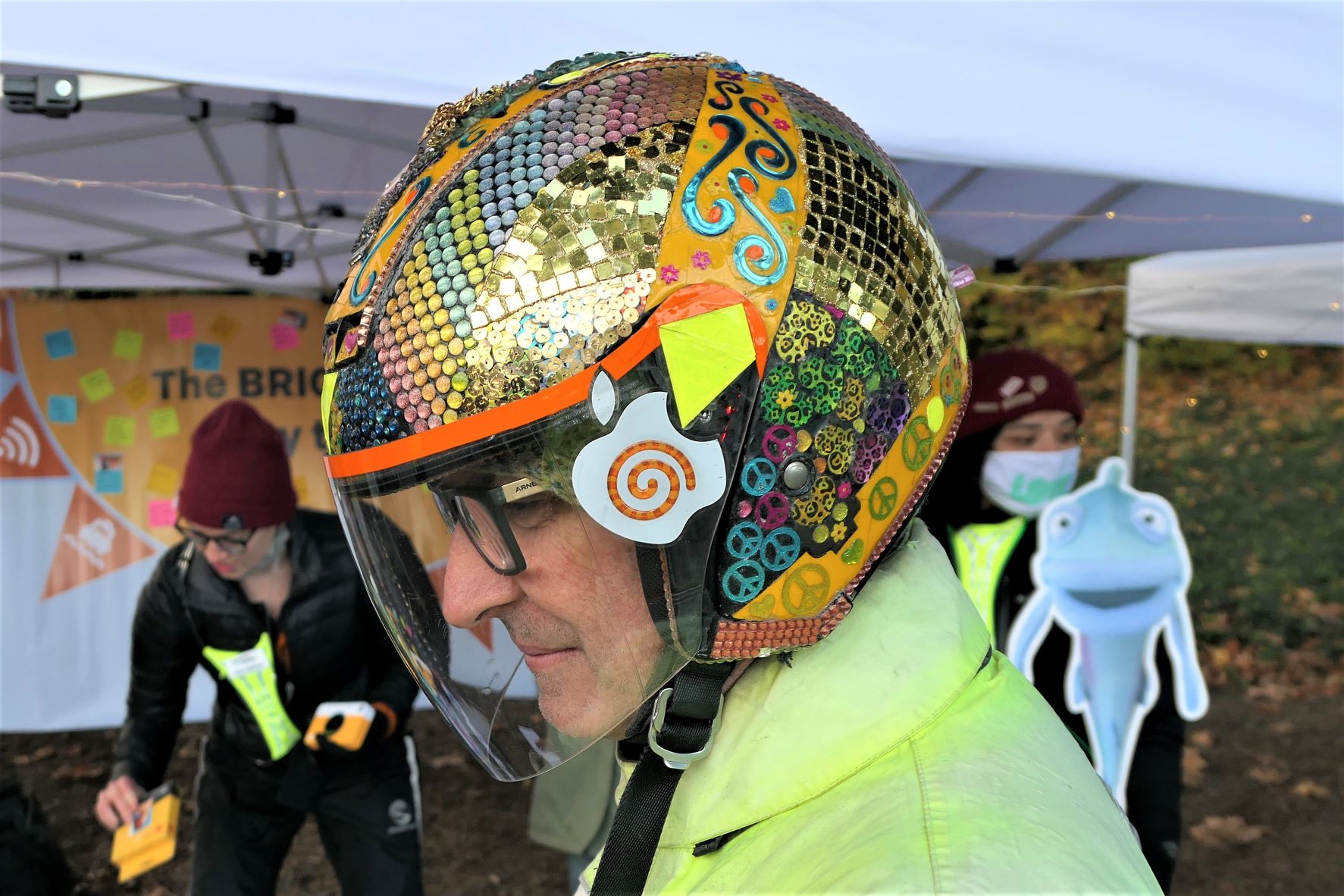 Join us on Saturday, Nov. 13, in Seattle’s Hing Hay Park in the Chinatown/International District from 11 a.m. to 1 p.m. for another Commute Seattle event. Cascade will be handing out snacks and swag, and visitors can get a free pastry as well as discounts on transit rides, plus other freebies and information.

Why bike? Zenk says it best: “My commute takes about 45 minutes by e-bike and it’s actually much faster than by car due to the (West Seattle) bridge closure and traffic congestion.” 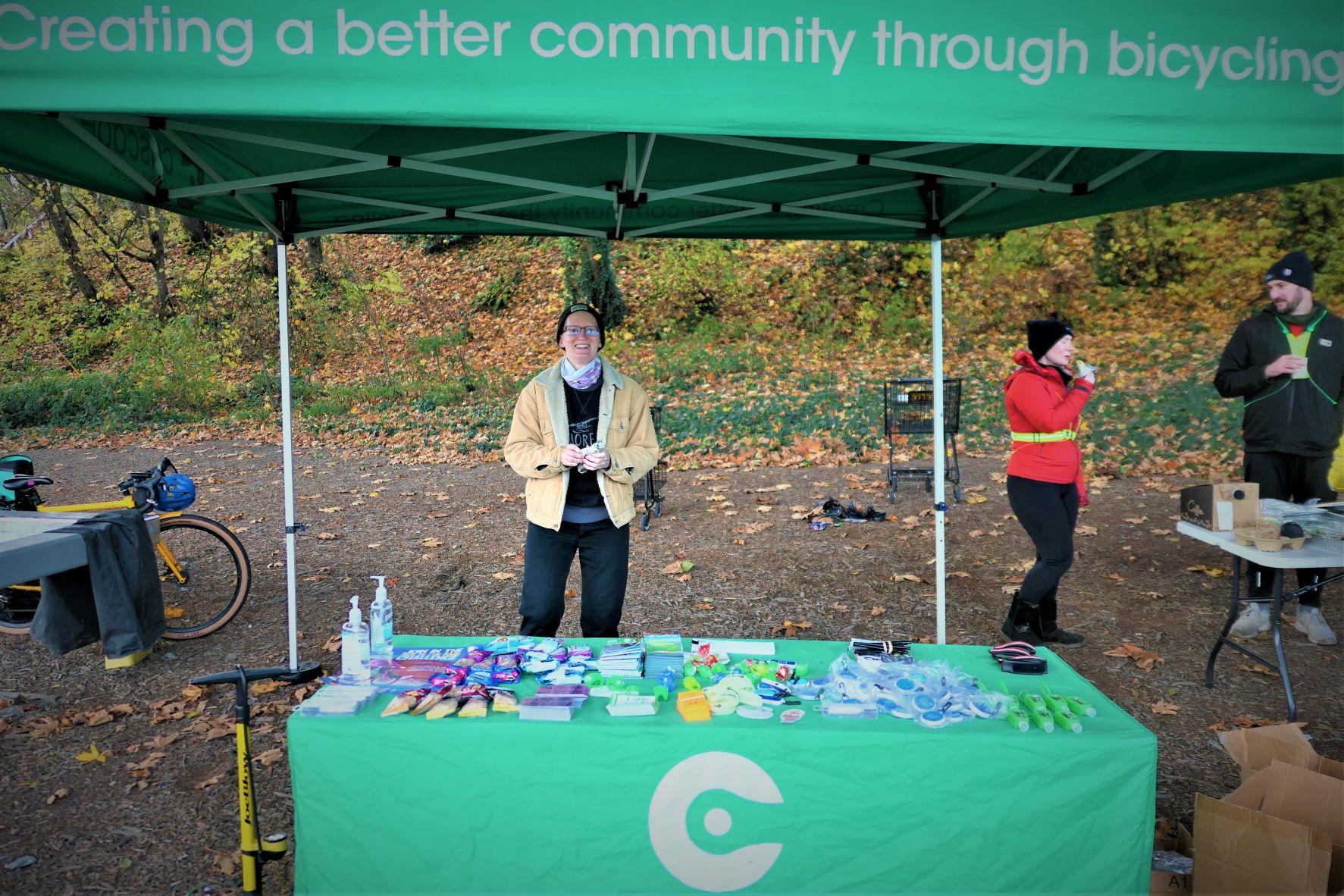 Zenk rides a RadRover fat-tire e-bike from Seattle’s Rad Power Bikes. “I’ve commuted on motorcycles and scooters in the past and this is the best option.”

Riding her Liv commuter bike, Amanda Gunn, stopped by the Commute Seattle event on the West Seattle Bridge Trail to get a free burrito and chat with fellow bike commuters. Her bike commute from Alaska Junction in West Seattle to South Lake Union takes 30 to 45 minutes when heading downtown. “It takes longer returning home due to the hills,” said Gunn, who was all smiles as she pedaled away.

“I love the ability to get some fresh air and exercise on my bike before getting to the office or riding home,” added a woman nearby who had pedaled to the event on her Specialized Turbo Vado e-bike to get a free burrito and swag. Another benefit of e-bikes: You can ride out of your way and take the long route thanks to the electric boost. 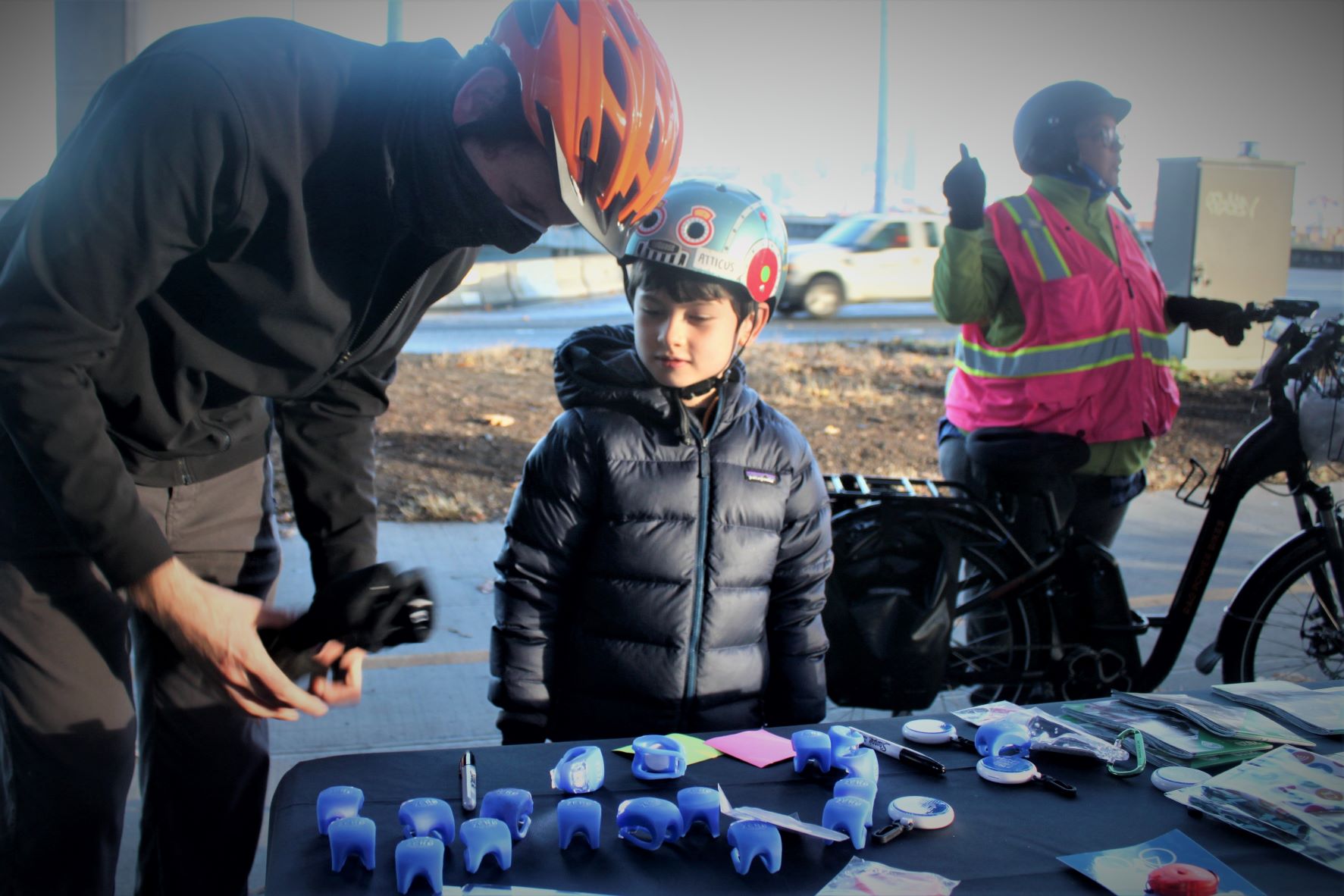 This father and son pedaled by on a cargo bike and stopped by for some lights and snacks.

The Seattle Department of Transportation attended the West Seattle event and was offering a $25 sign-up bonus for people registering for the Flip Your Trip program. Flip Your Trip offers a smartphone app similar to an Orca card that enables West Seattle residents impacted by the bridge closure to use light rail, busses, the water taxi, plus Spin’s scooter and bikeshare programs.

Sign up for the Ride in the Rain Challenge presented by Cascade and Washington Bikes, and read our post, “Gear Tips for Riding in the Rain” if you’re new to soggy weather bicycling. 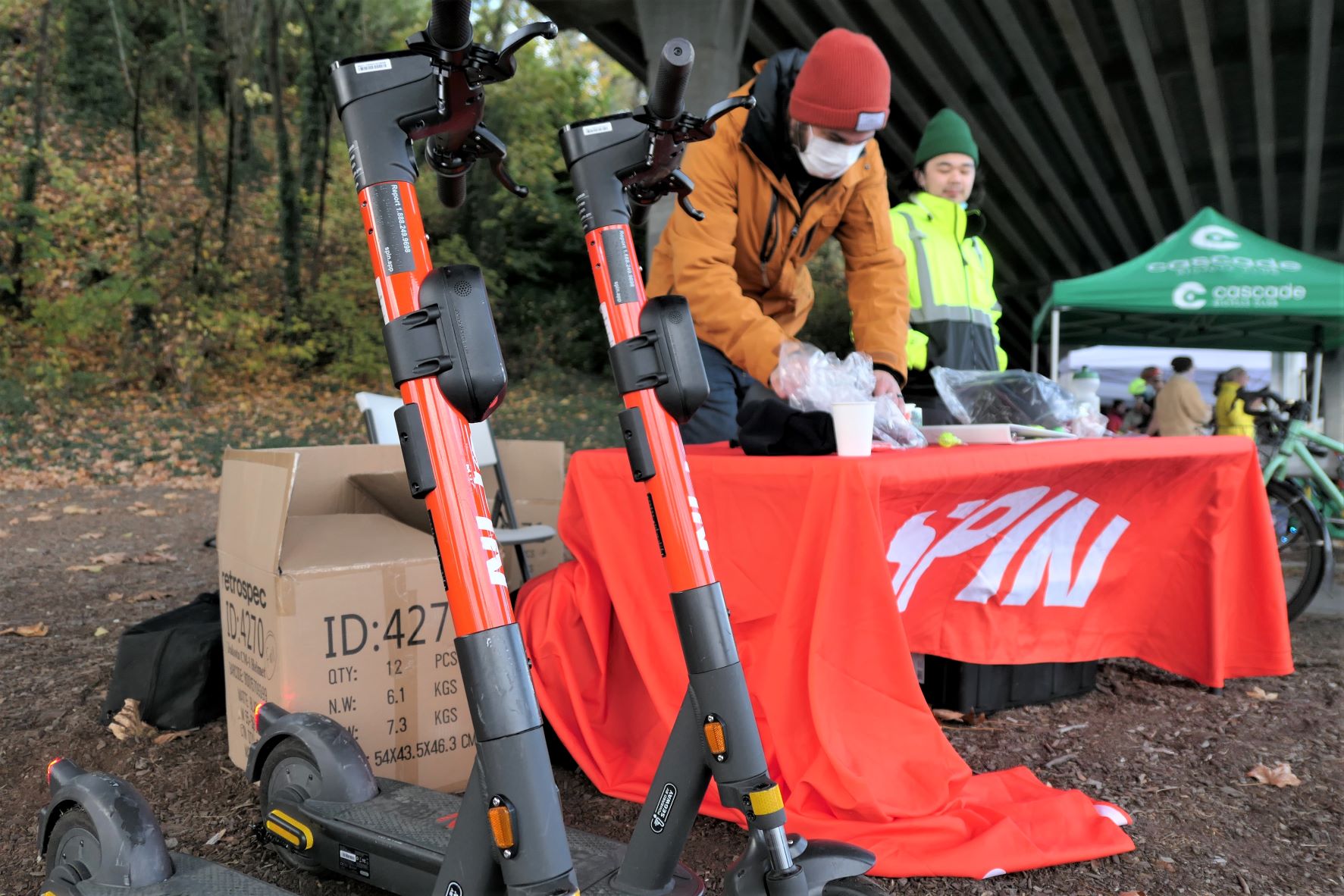 Free socks in the Spin booth! 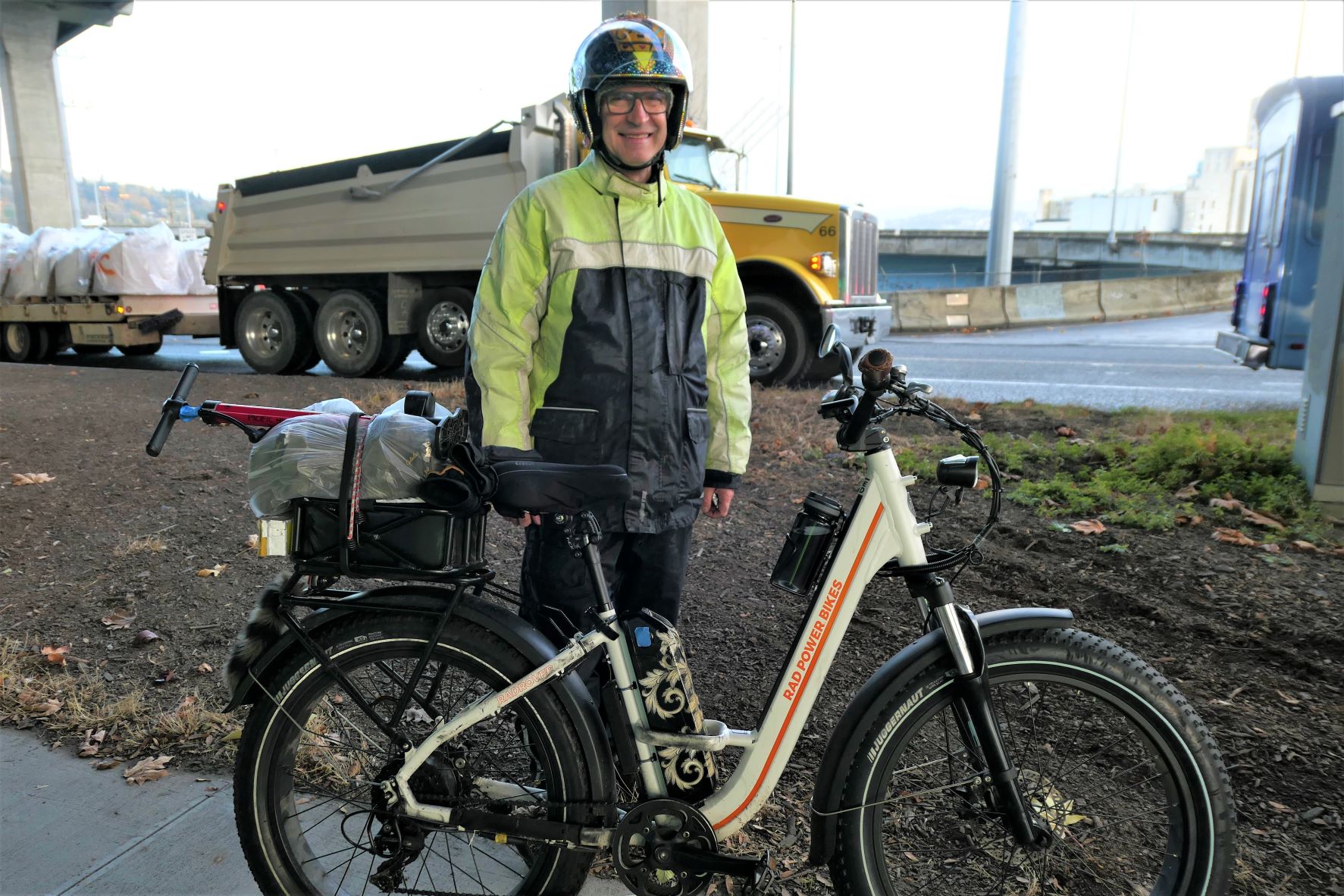 Brian Zenk and his RadRover.