We headed out on a crisp spring afternoon to pre-ride Cascade’s Bike-n-Brews El Norte route, following the Burke-Gilman Trail from Kenmore to Seattle’s Ballard neighborhood. It was the perfect excuse to taste beers from three of the region’s best microbreweries and safely gather with fellow lager lovers following a long pandemic lockdown.

First stop: 192 Brewing Company's Lake Trail Taproom in Kenmore, conveniently located right off the Burke-Gilman. The brewery is named for the 192-square-foot backyard shed where the founders originally brewed, though today it offers expansive indoor and outdoor seating. 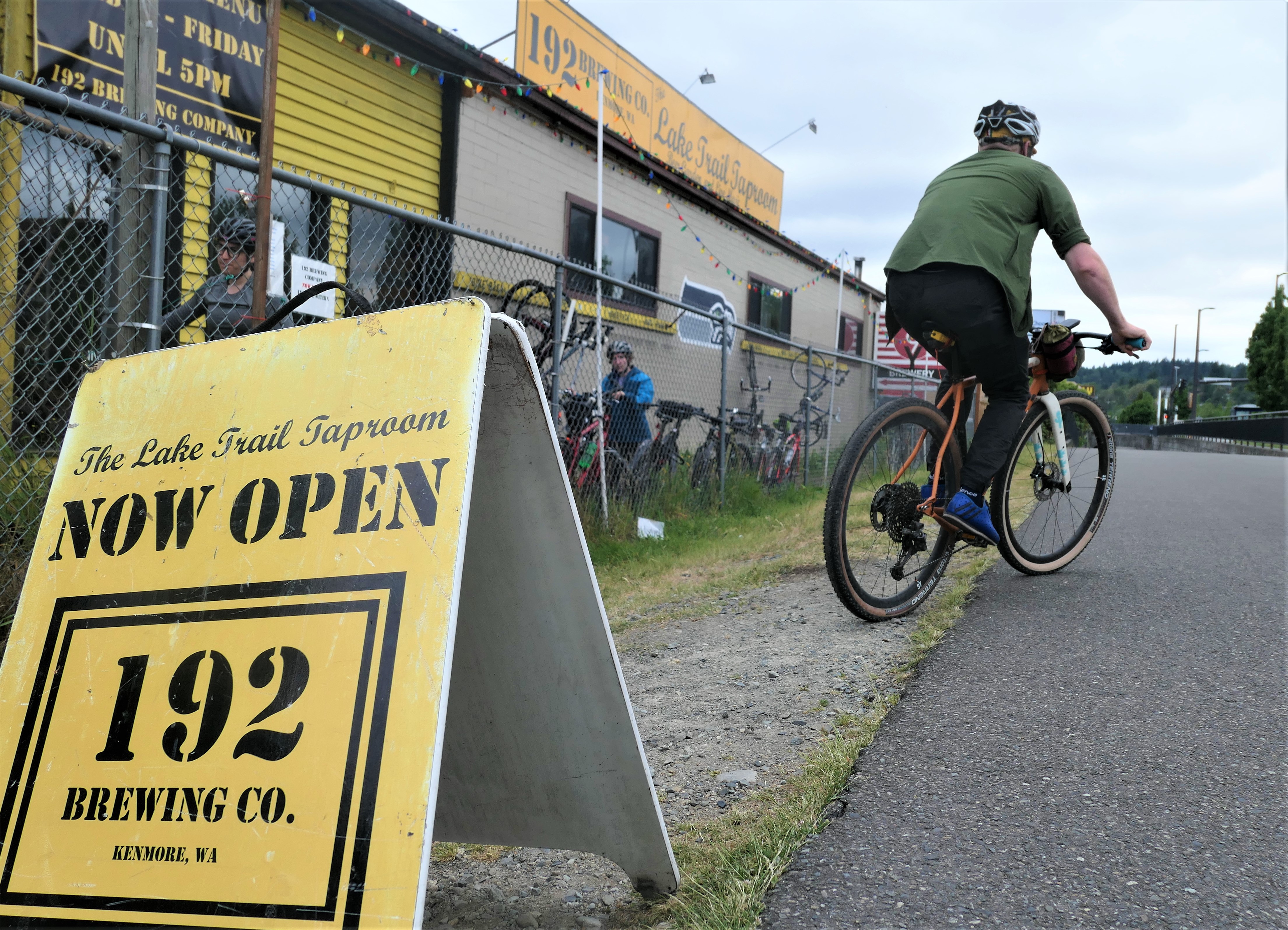 A band played classic dad-rock hits on an outdoor stage as we grabbed a table in the beer garden and ordered pints. With me were Sara Kiesler, Cascade’s communications director, and Wendy Clark, our digital communications manager. We compared tasting notes, ordered food to soak up the suds, and caught up after many months of working from home.

Our glasses drained, we saddled up and headed south on the Burke-Gilman toward our next stop, 16 miles away: Peddler Brewing Company in Ballard. Sara spotted some bald eagles nesting in a tree along the path, and we paused to enjoy the scene. Continuing our journey, we enjoyed the views of Lake Washington, passed the University of Washington campus, and pedaled beneath the Aurora and Fremont bridges--arriving in Ballard about an hour later.

Consulting the route map included in the Bike-n-Brews El Norte registrant packet, we turned off the Burke-Gilman and quickly found Peddler Brewing Company. Another round of cold brewskis--and a glass of water--sounded great following our ride. 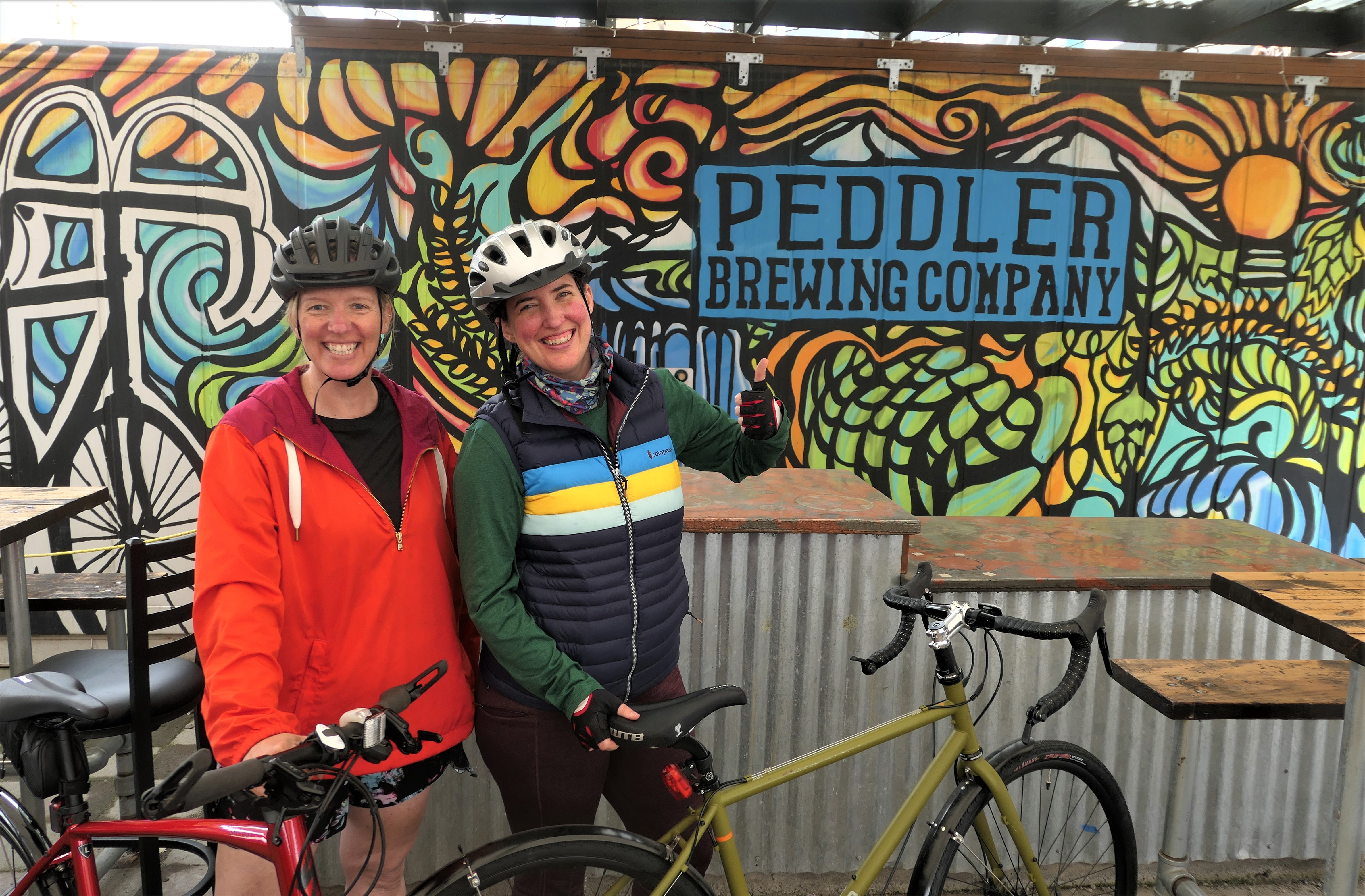 Peddler Brewing is near and dear to Cascade. "Peddler Brewing was founded on a love of bicycles and beer, and we appreciate all the work Cascade does to support bicycling in Seattle and bring people together on bikes," says Haley Keller, a former Cascade board member who founded the brewery along with her husband, Dave.

The Kellers are active in Seattle bicycle advocacy, and they provide plenty of amenities to encourage people to ride bikes to their brewhouse. “We Love Cyclists!” says a headline on the Peddler website. Cascade members who show their membership card or a Bicycle Benefits sticker get $1 off pints any time of the year. Peddler welcomes people to bring their bikes into the beer garden, and the brewery offers a bike pump for customers who need inflation.

The pump came in handy when Sara noticed a slow leak in her tire. We removed the tube, patched the hole, and ordered a round.

Peddler's beer is also fantastic. I enjoy lighter and lower alcohol brews when riding, so I chose the Tangerine Hefeweizen. Peddler also offers radlers--a half-pint of any of their brews topped with sparkling grapefruit juice. It’s a refreshing alternative for those who want to hydrate and halve their alcohol consumption on a hot day. 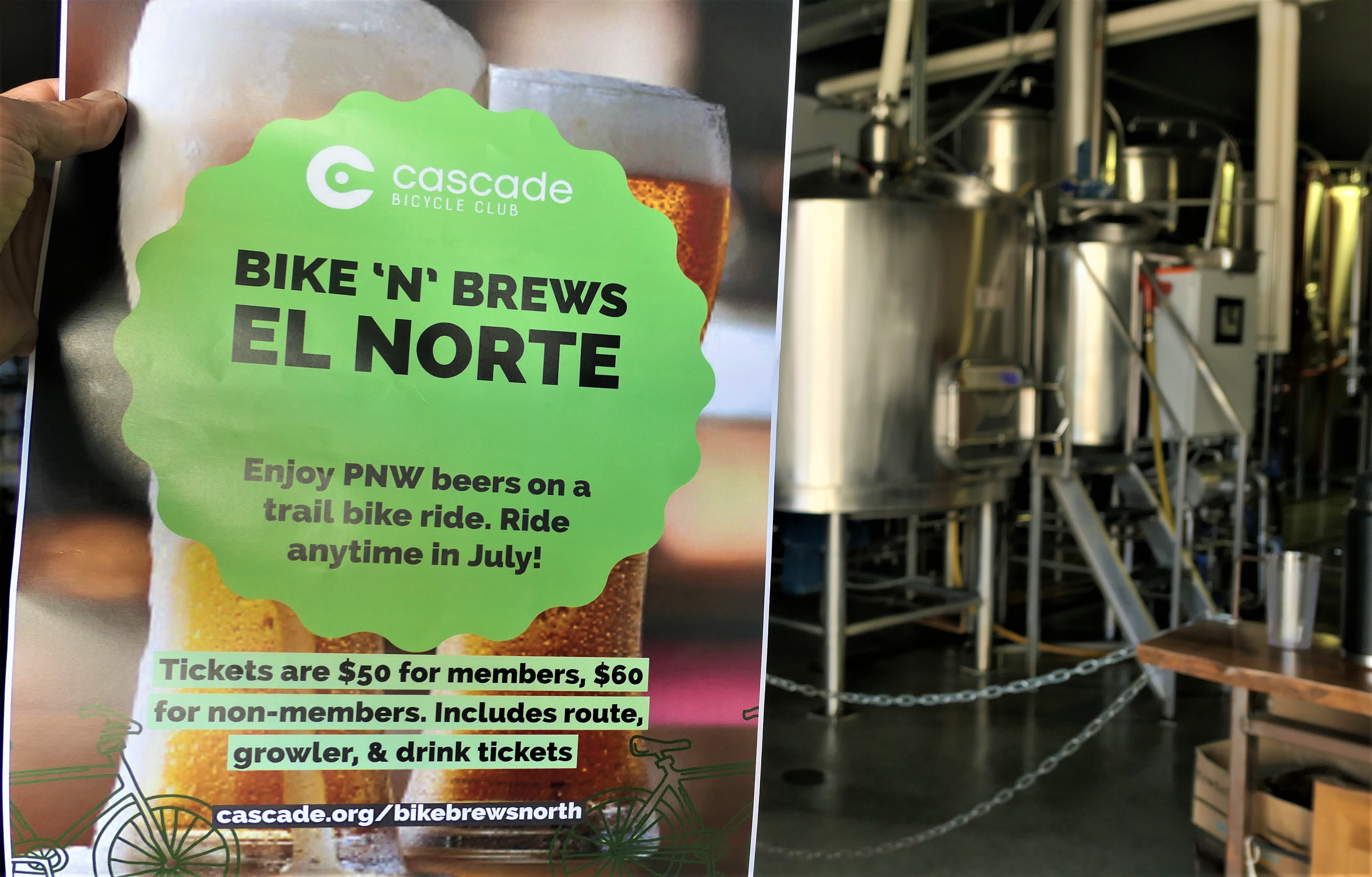 Due to time constraints, we were unable to visit the third brewery together, but I returned on another day to enjoy a cold brew at Stoup Brewing. Stoup has two locations: one in Ballard and another in Kenmore. Participants in Bike-n-Brews El Norte can choose to visit either. I rode to the Ballard location from my home in Seattle and filled my growler as a helpful employee hung a Bike-n-Brews poster.

The Bike-n-Brews El Norte route covers 33 miles if participants ride from Kenmore to Ballard and back, though people can choose to visit all three breweries in one day or on multiple days. Proceeds from every Bike-n-Brews El Norte registration support Cascade's programming and advocacy work. Participants receive three beer coupons redeemable at four brewery locations, plus a free growler koozie.

Registration closes on July 23, so sign up now. You can ride any time during July, but allow for three to five days for your packets to arrive by mail. People who register after July 17 must pick up their packet at Peddler Brewing on July 25 between noon and 2 p.m.

Ride responsibly, check the hours of the breweries to ensure you arrive during their working hours, and please bring some extra cash to tip your bartenders. Cascade is pleased to partner with and send some business to our beloved breweries that took an economic hit during the pandemic. Bottoms up, and keep the rubber side down. 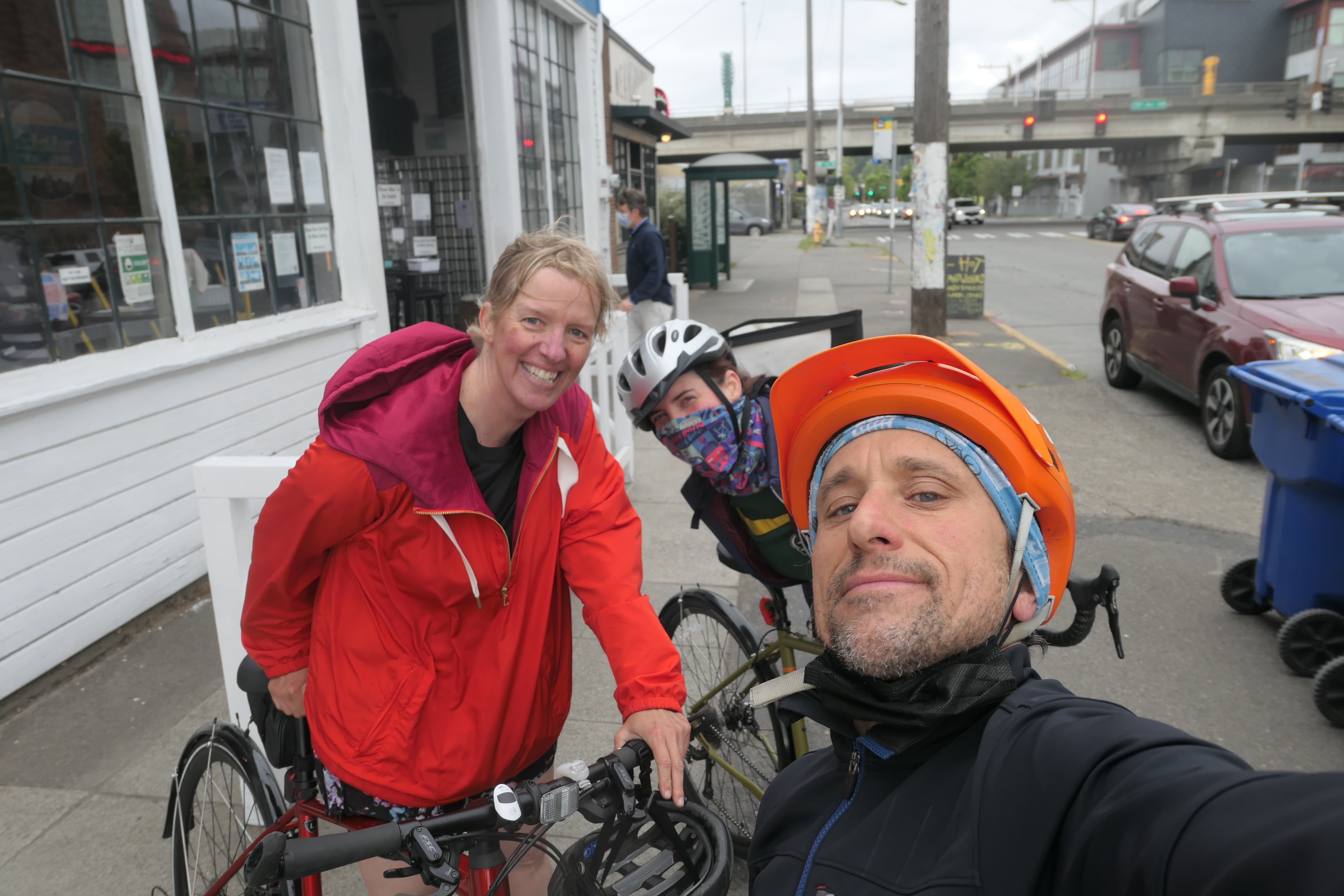