As one of the primary public officials making bicycling safer in Seattle, it’s ironic that Dongho Chang crashed on his first bike ride.

He was a 9-year-old boy living in South Korea, where his family lived prior to immigrating to Washington. Chang sold all of his toys to get enough money to rent a bike from a neighborhood shop the day before his family moved. “It’s still one of my most vivid and favorite memories,” he says.

Inexperienced with riding, Chang lost control and crashed into a store. “My dad was really upset with me. I was in BIG trouble. But I was secretly happy that I finally got to ride a bike.”

These days, it's Chang's job to help avoid crashes. He is the City Traffic Engineer for the Seattle Department of Transportation (SDOT). He is involved with nearly all SDOT projects that involve changes to street infrastructure, signals and signage, bike lanes, crosswalks and more. He commutes by bicycle year-round and, when not riding, is a regular user of mass transit who walks daily with his wife. 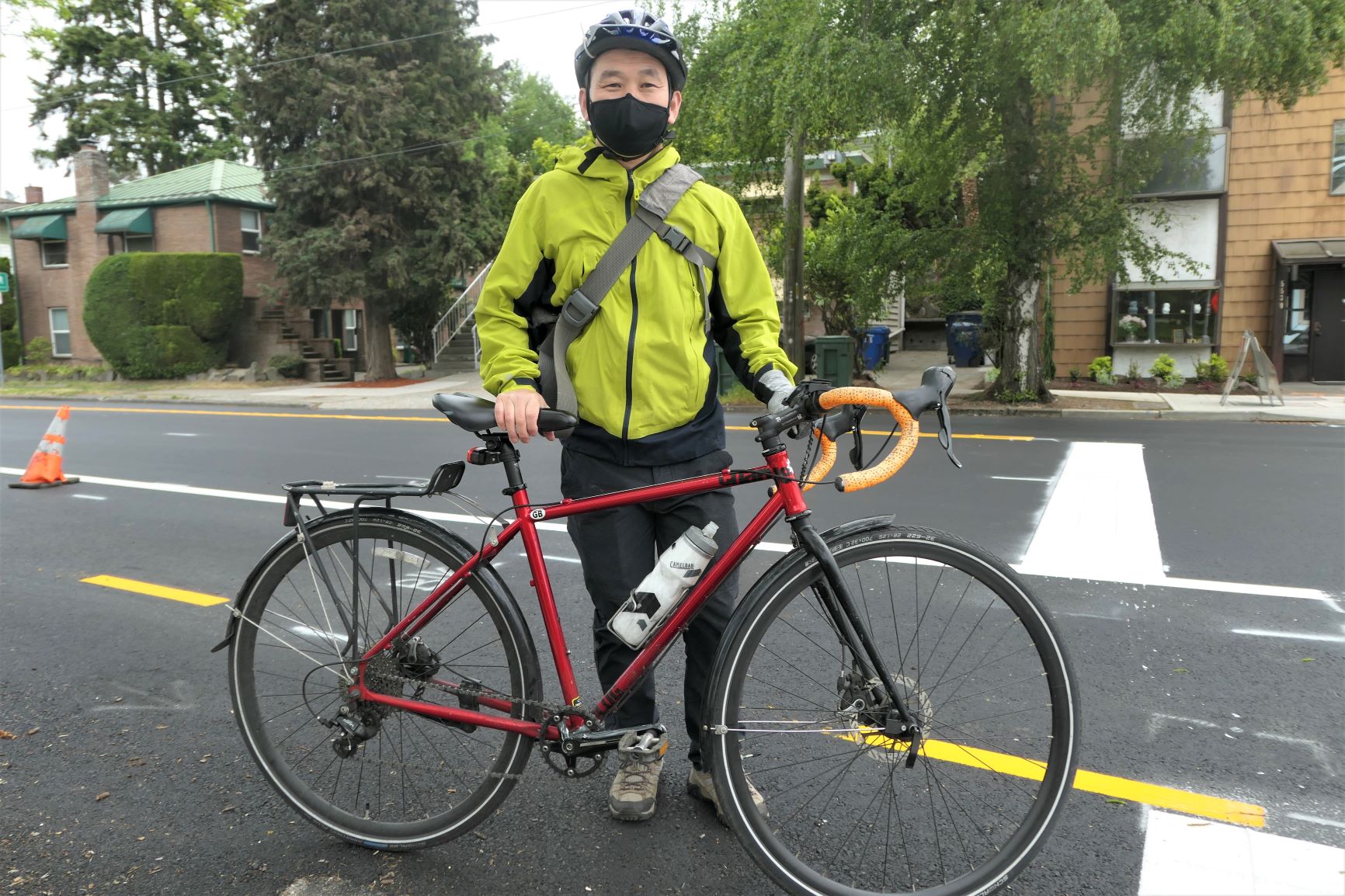 I met up with Chang to learn about his job, join him for a spin, and check out the construction progress on a multimodal project that will vastly improve safety for people who bike, walk, roll--and drive--around Green Lake, one of the city’s most popular parks and recreation areas.

“Everything we are trying to do is engineer a safer environment for people,” he says.

While critics of Seattle’s car-centric streets have legitimate gripes about the slow pace of change, especially in the underserved neighborhoods of South Seattle, there is no disputing the fact that the city is in the midst of a transformation in how people move through the urban environment on foot, by bike, and by mass transit. According to SDOT, the city plans to add 12 to 21 miles of bike facilities this year as part of its Bicycle Master Plan, including near the new Northgate and University District light rail stations.

We meet at the southern end of Green Lake where the street forks around either side of the lake. The city is building a 1.8-mile, two-way bike lane on the eastern side of the lake. “Once you put in a more comfortable and safe facility, more people will use it,” Chang says.

New concrete sidewalks, curbs, and bike ramps have been installed along with crosswalks and traffic signals, plus a push-button bicycle crossing signal, amongst other improvements. Temporary orange traffic cones currently separate the two-way bike lane from cars. In the future, flexible bollards will be installed, “and eventually we will want to put in hard curbing all the way,” Chang adds, separating cars from bikes along the path’s entire length. 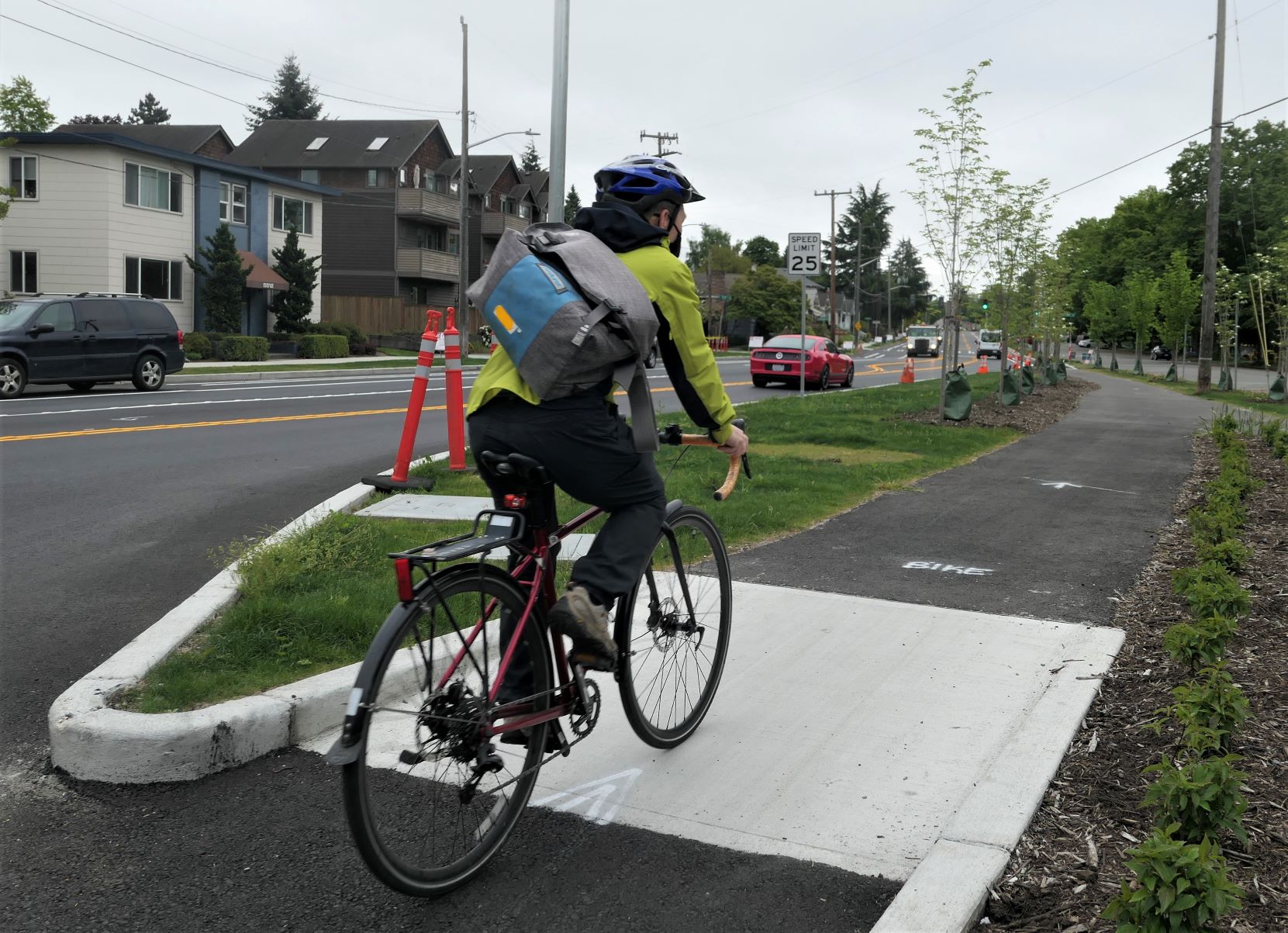 Chang rides up one of the many bike ramps that have been added along Green Lake.

Although the work is continuing, it already feels safer to ride around Green Lake. Not long ago there was car parking on both sides of the street. People on bikes had to ride in the door zone, with motor vehicles whizzing past. Now the bike lanes are consolidated on the lake side.

“Let’s go ride it,” says Chang, who rides a utilitarian, steel-framed road bike. It’s his second bike of the same model. The first one was stolen while locked up during a night meeting related to the 2nd Avenue protected bike lane project--an infrastructure upgrade supported by Cascade that has vastly improved riding through downtown.

We proceed northward up the two-way bike lane, passing people walking, jogging, riding bikes and pushing baby strollers. We stop at the intersection of Ravenna Boulevard and East Green Lake Way North. In the past it was a baffling and dangerous intersection. Cars funnel through from four directions at odd angles, mixing with people crossing the street and riding through on bikes. To make it safer, the city has poured tons of concrete to shrink the road for cars and extend the pedestrian islands.

“It was a really wide and confusing intersection before, and it was hard for pedestrians to cross. People driving are now having to slow down. We are trying to maximize the space for pedestrians, make the car turns as slow as possible,” Chang says.

“This is what Vision Zero is all about. Engineering the streets so pedestrians have the right of way, where crosswalks are clear, so that even as a bicycle rider you need to pay attention to pedestrians and yield to them,” Chang says. “We want to slow everyone down, reduce the crossing distance, make drivers take turns in a slow and predictable manner.” 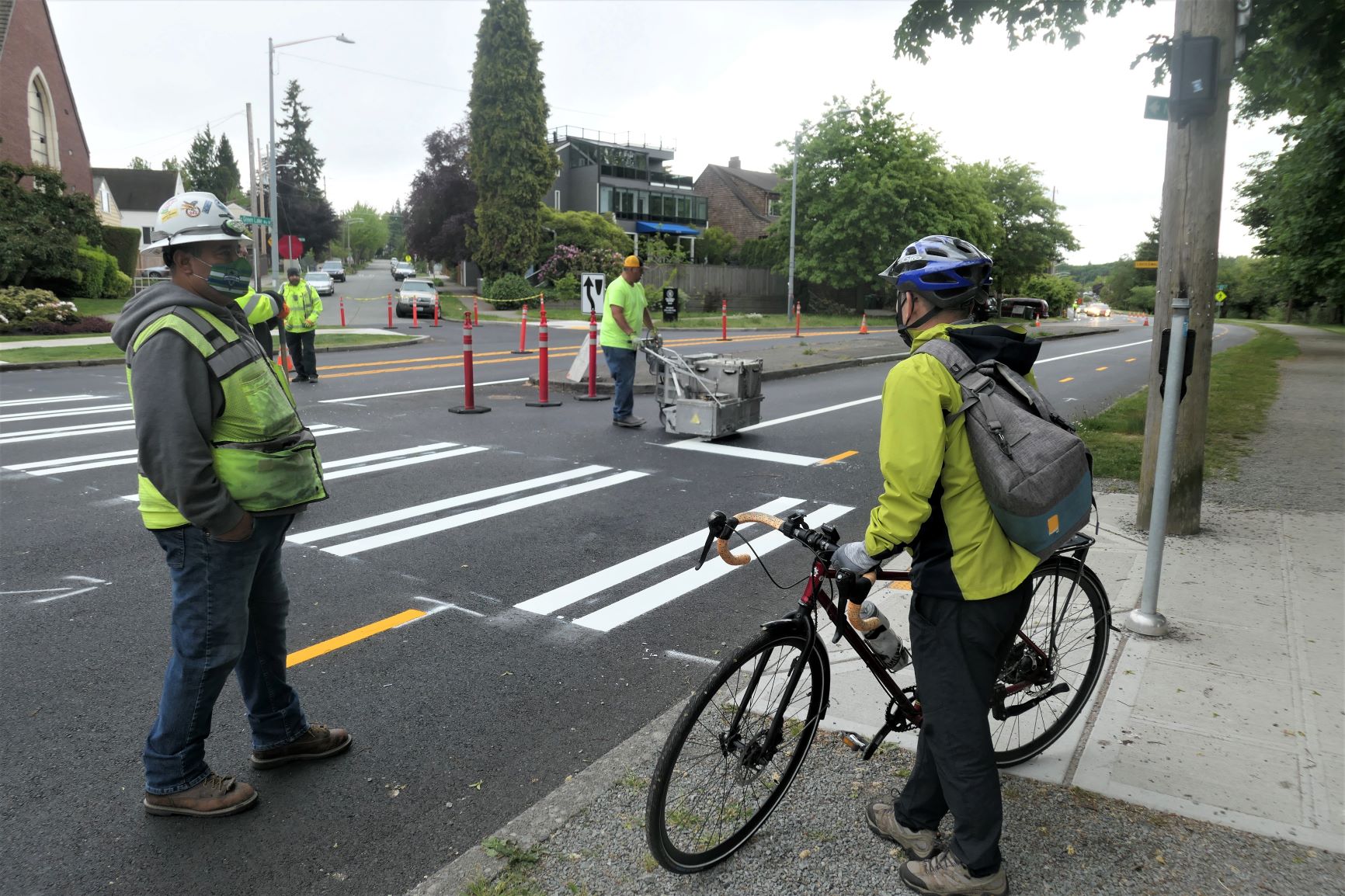 Chang inspects the work of a crew painting new crosswalks.

We pedal onward, and Chang stops to chat with city workers painting a crosswalk. He snaps a photo and, sure enough, the image ends up in his Twitter feed a few hours later.

With more than 10,000 Twitter followers, Chang is hardly a Bieber-level social media influencer, but he is well-known among active transportation nerds. He posts photos of new curbs, crosswalks, bollards, bus stops, street realignments, signage and more.

The Seattle Times called his Twitter feed “a catalog of changes to Seattle’s street grid and urban landscape. Almost all those changes are small, but when taken together, they paint a picture of a city in transformation, one less focused on fast car travel and more focused on making streets safe and reliable for walkers, bikers, bus riders and drivers.”

Chang says his tweets are an important source of public comments. “We get a lot of feedback that is very helpful, and we learn about things we are doing well, but we also get feedback that tells us what we need to improve.” 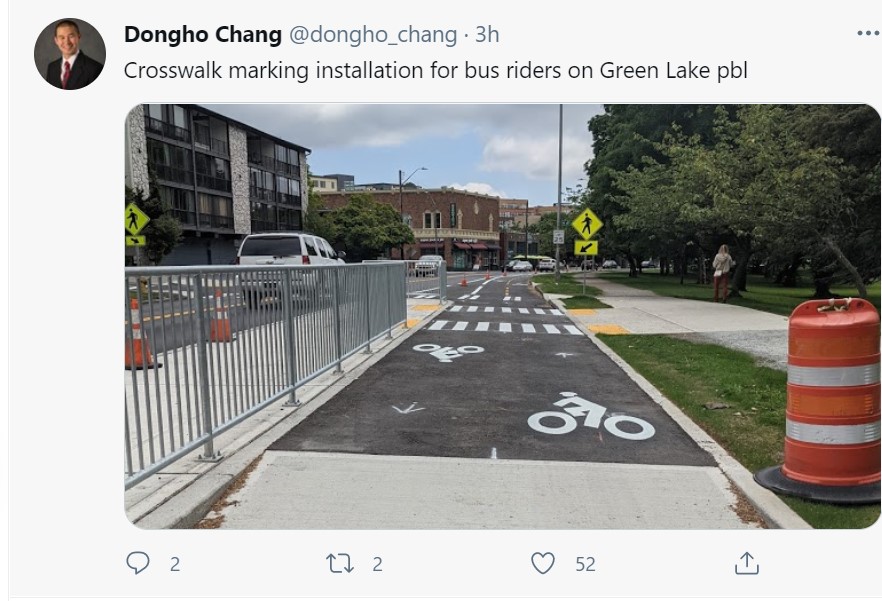 Chang took this photo during our ride, showing the raised platform for a bus stop, with crosswalks on the two-way protected bike lane.

Note to Cascade members: if you have images of good or bad bike infrastructure in Seattle, tweet @dongho_chang.

We pedal onward to the northern tip of the lake, where another previously confusing intersection is being re-engineered with better signage, crosswalks, extended sidewalks, and a continuation of the bike lane up to 80th Street, where it intersects with another protected bike lake.

All of this work around the lake is part of the city’s Green Lake and Wallingford Paving and Multi-Modal Improvements Project. While the project will improve safety and connectivity for the relatively affluent neighborhoods surrounding Green Lake, there is a huge need for similar work in South Seattle. Cascade and other organizations are urging faster action to build safe networks through Georgetown, SODO, Beacon Hill, the Rainier Valley, and South Park. 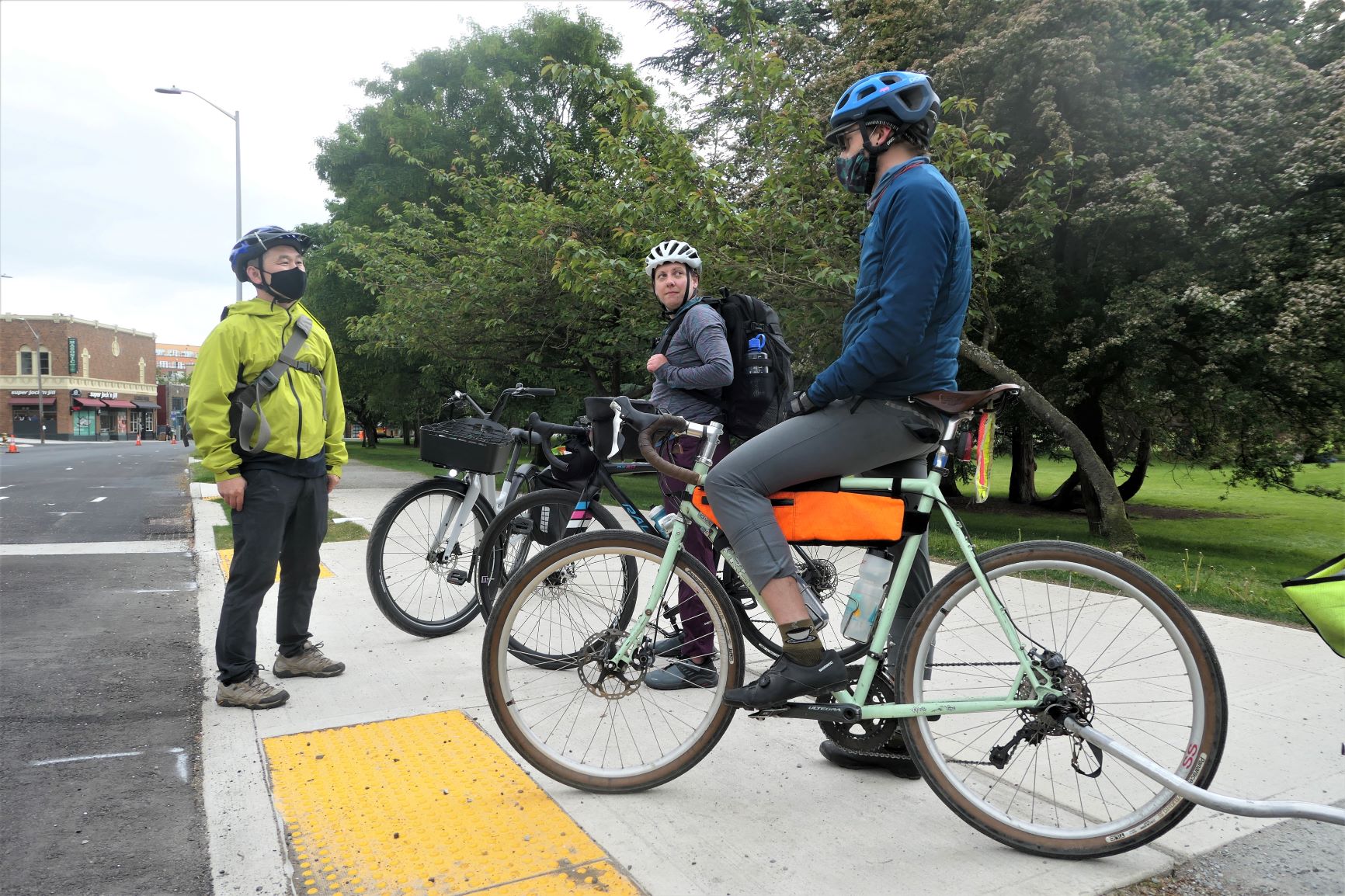 We bump into Maxwell Burton, Cascade's Pedaling Relief Project manager, during our ride. Chang is well-known in the active transportation community.

Chang hears the criticism loud and clear. Two days earlier, Chang attended a memorial ride for a person killed by a hit-and-run driver in South Seattle, where he spoke about the need for safer bike infrastructure.

“We need to do more of these projects, especially in our underserved communities in South Seattle,” Chang says. “Connectivity and safety for people on bikes is important. As our city grows we need to think about the values of our society and how we reflect those values in how we build our streets and services, and how we make our society more equitable.”

Childhood Memories of Learning to Ride

As a family man and longtime resident of Seattle who has worked for the city for almost 10 years, Chang certainly wants to make Seattle safer and more equitable for his own family. May is Asian American and Pacific Islander Heritage Month, providing the opportunity for us to speak about his immigration story. Chang and his wife have two children, and they live in a bilingual household with Chang’s mother. “We recognize special holidays and make traditional meals, and we also recognize that the United States is a huge cultural melting pot,” he says.

Then he laughs: “But my kids are truly American. They haven’t taken on the Korean culture as much as we would hope, but maybe later in life.”

When Chang arrived with his family in Olympia as a child, he quickly tried to learn a few words of English so that he could talk to a neighborhood boy who owned a bike. “I made an instant new friend,” Chang says. “We made ramps with plywood and cinder blocks and took turns jumping and crashing.”

Those childhood days of riding a bike turned into a lifelong pursuit. As an adult, Chang enjoys the ease of getting around by bike, the friendships it helps form, “and the joy and relaxation that the simple act of pedaling brings,” he says. “I’m so glad that I got a chance to crash that rental bike as a boy.”

The Recipe Book for Roads

Seattle’s bike community can also be happy for that childhood crash. In addition to working to increase the safety of Seattle’s streets, Chang is among the urban traffic engineers who are urging big changes to the federal guidelines that determine the design of American streets.

The Federal Highway Administration is in the midst of revising one of the main playbooks for traffic engineers such as Chang--the Manual on Uniform Traffic Control Devices. It has been called the recipe book for roads, and many safe streets activists and bicycling advocates feel it is outdated and in need of a major overhaul. Many standards in the manual reflect the car-centric philosophy of previous generations. 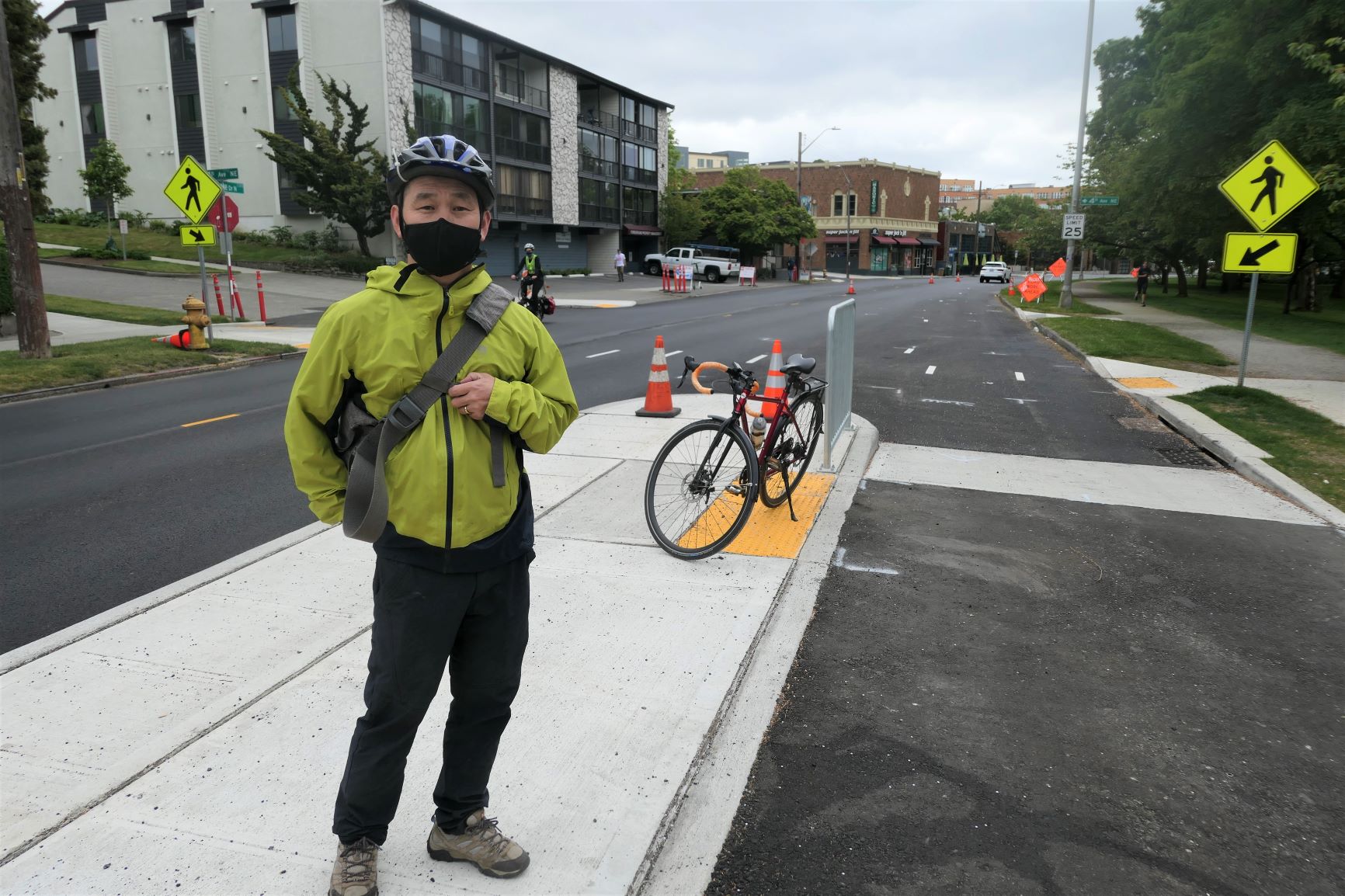 Standing on one of the raised concrete islands the city has installed to increase safety for pedestrians and bus users.

“That manual has consequences for our streets. How we design our bike facilities is mandated in many ways by that manual. What we hear from the community is that we should separate users where we can, and make those separation barriers more robust. But the manual is sometimes telling us the opposite.”

Tens of thousands of individuals, organizations, and agencies provided comments to the Federal Highway Administration about revising the manual. SDOT provided comments, as did Chang personally. He is hopeful that U.S. Transportation Secretary Pete Buttigieg will help direct federal transportation priorities toward a more multi-modal philosophy of street design.

Our time finished, Chang rides away to look at another traffic intersection, snap some photos for Twitter, and get back to work on the long process of making Seattle safer for people on bikes. With every pedal stroke he lives out the dreams of that 9-year-old boy learning to ride, and preparing to embark on a new life in a faraway land. 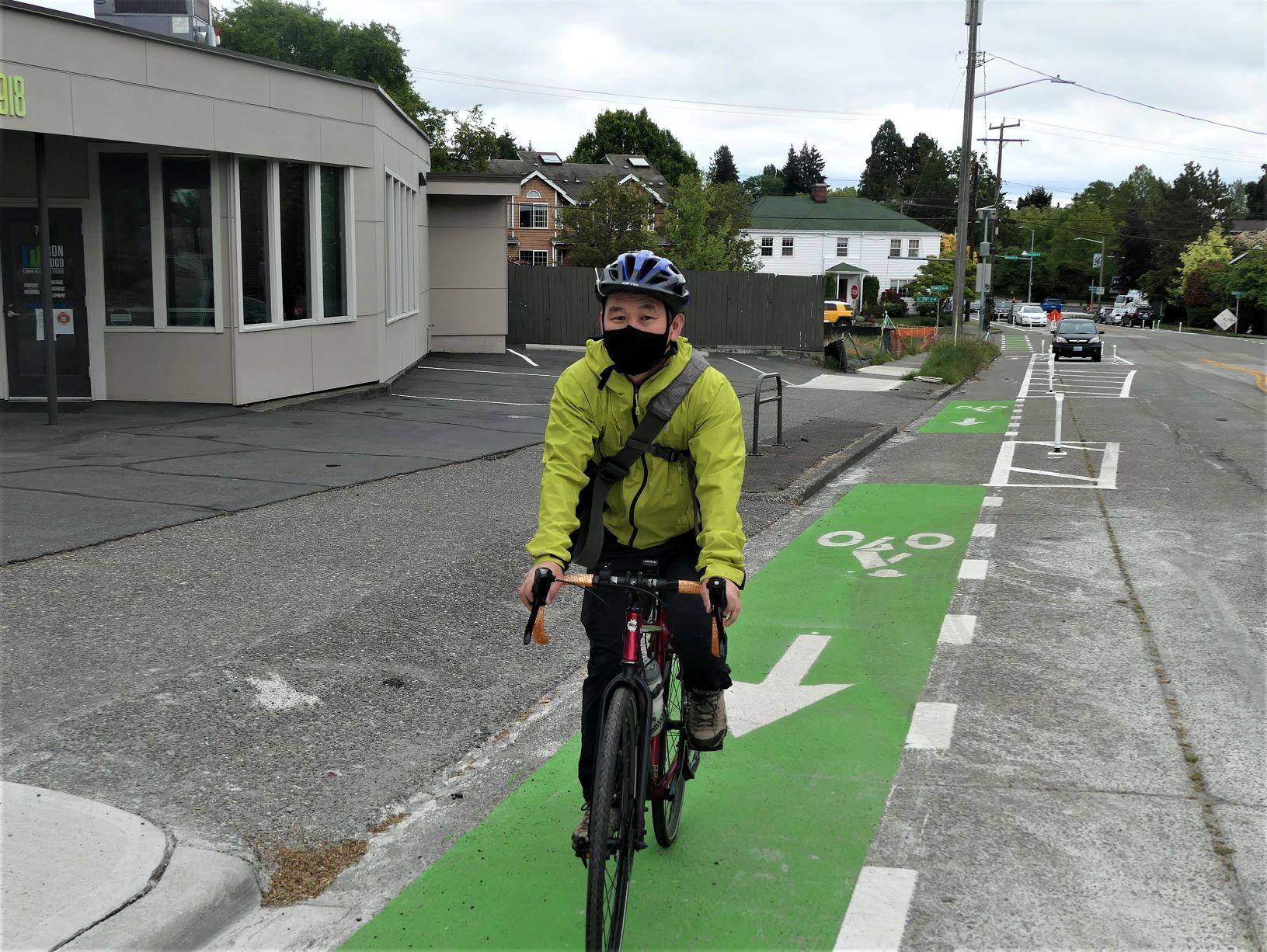