2021 marks the 60th anniversary of Martin Luther King, Jr.’s visit to Seattle. Cascade rode to some of the locations the civil rights leader visited, with the goal of encouraging Seattle-area residents to create their own self-guided bike tours to MLK landmarks. 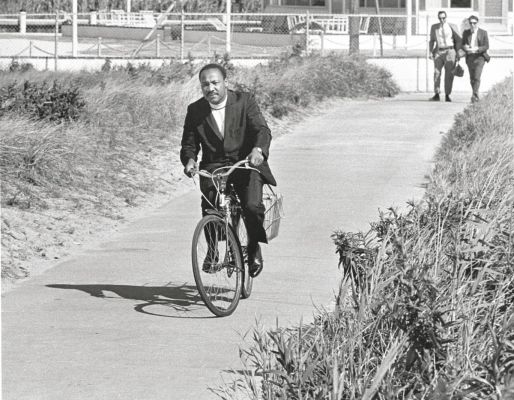 Martin Luther King, Jr.’s birthday on Monday (Jan. 18) has special resonance this year following the Black Lives Matter protests of 2020, and the growing movement for racial justice and equality envisioned by the murdered civil rights leader.

2021 also marks the 60th anniversary of Martin Luther King, Jr.’s only visit to Seattle, in November of 1961. To commemorate that historic trip, and celebrate the MLK national holiday, we bicycled to some of the Seattle sites, artworks, and landmarks associated with the civil rights leader to learn about his visit, the progress it inspired, and the work that remains. 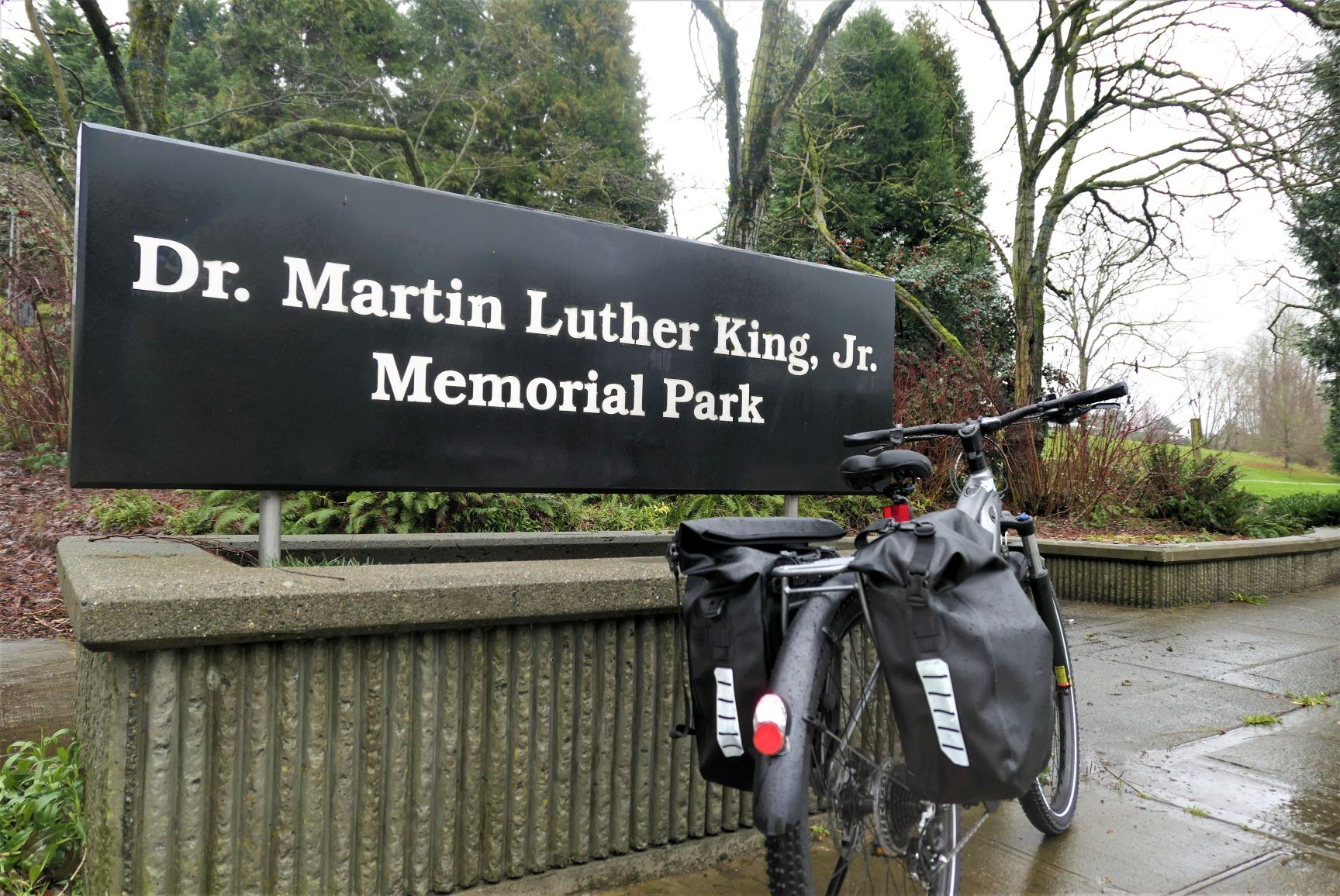 Our first stop was the Martin Luther King Jr., Memorial Park. The four-and-a-half-acre amphitheater park, dedicated in 1991, was empty when we arrived in a steady rain on a weekday morning. Raindrops splashed in the reflecting pool surrounding a 30-foot tall granite sculpture inspired by King’s “I’ve been to the mountaintop” speech. 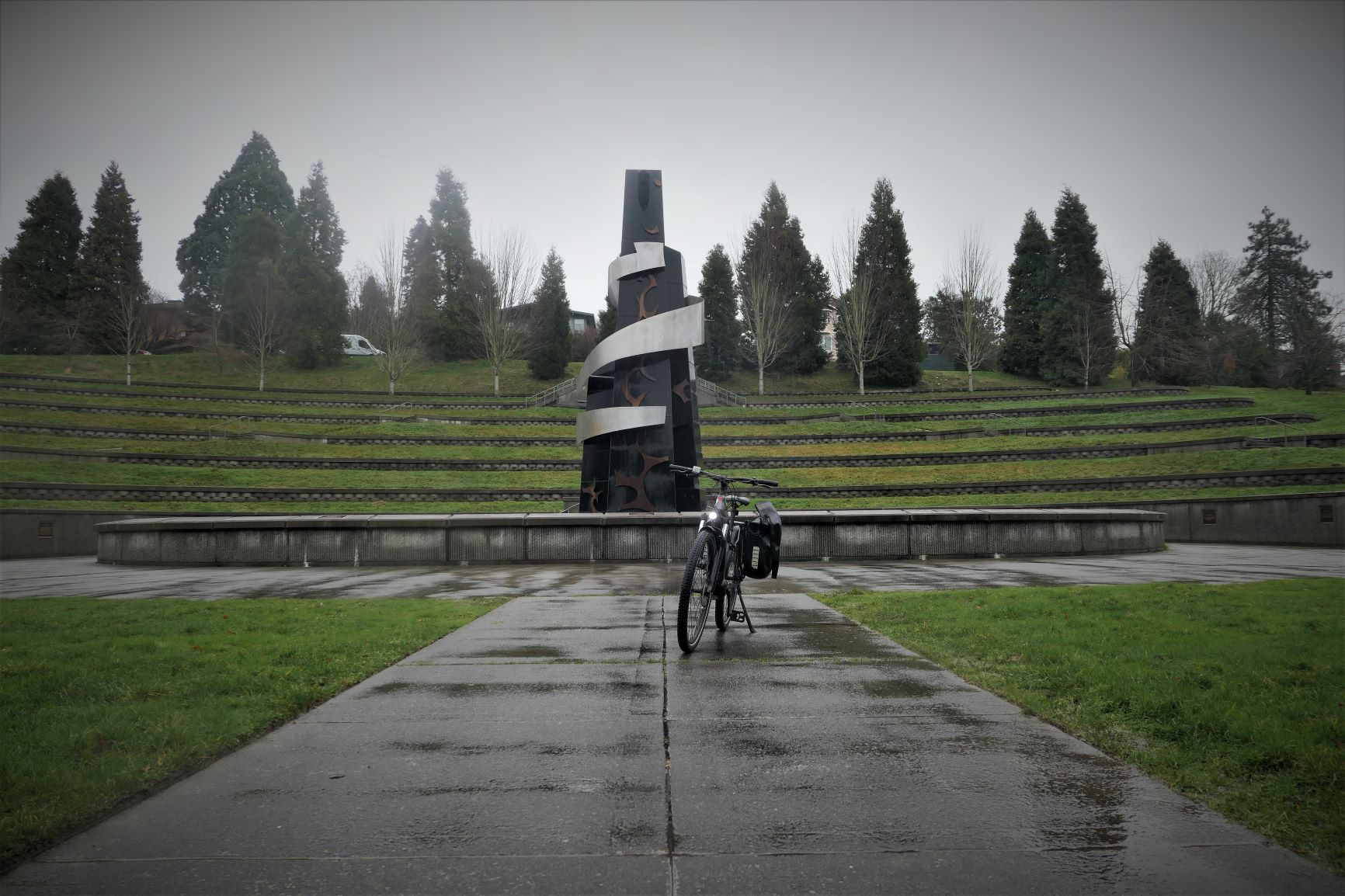 Plaques with King’s quotes and information about his life glistened in the rain, including this one: 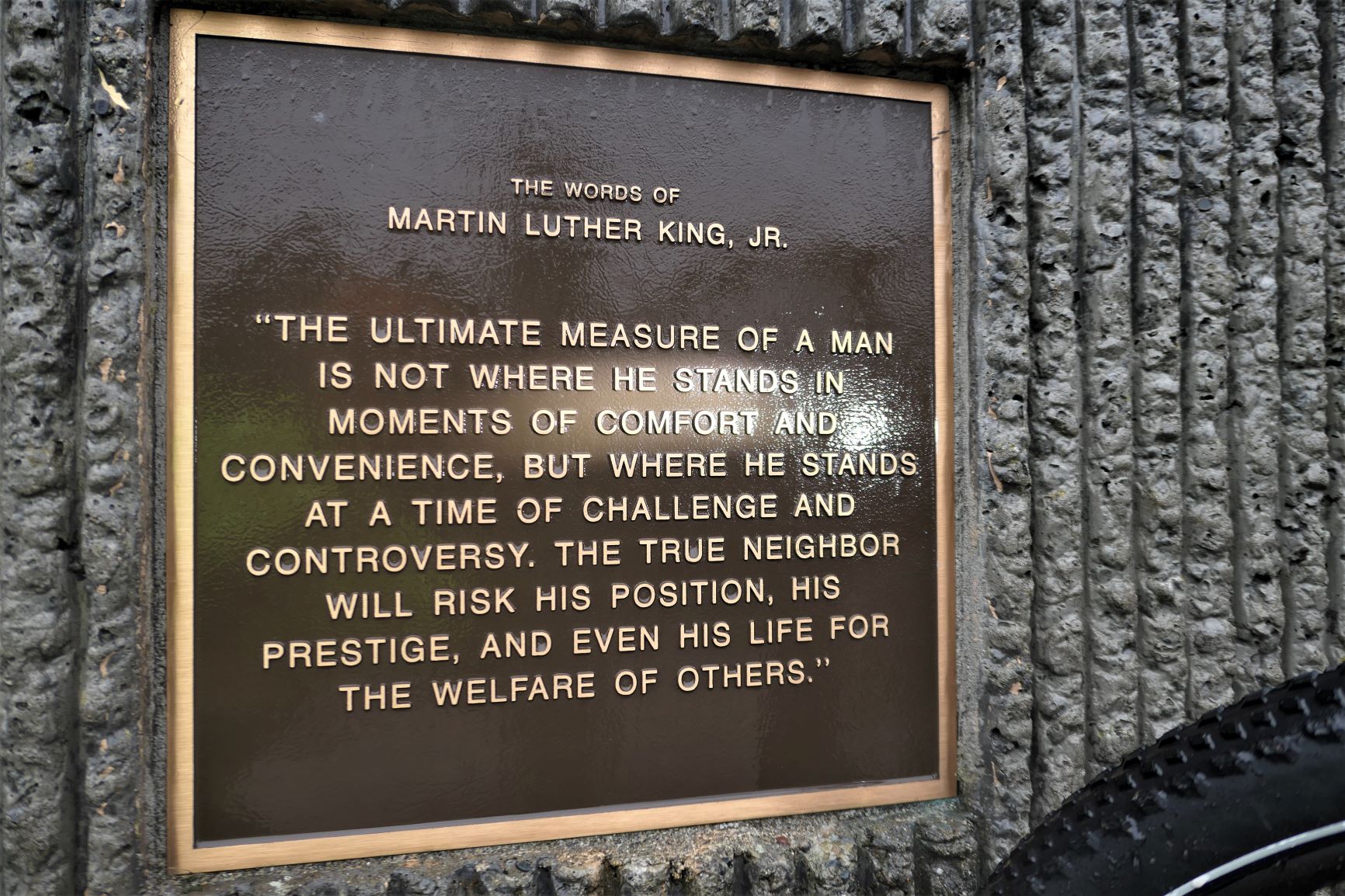 Were King to make that remark today, he would likely change “man” to “person,” but the sentiment is clear: All of us, especially those of us who benefit from white privilege, must risk more to advance freedom.

Cascade Bicycle Club has engaged in deep introspection over the past year about its years of silence on the issue of equality, but the organization is taking steps by adopting a Commitment to Anti-Racism, convening panels to discuss efforts to diversify bicycling, supporting organizations including the Peace Peloton, and adopting a new Mission, Vision and Values that explicitly state our goal to use bicycles to help eliminate inequity.

Departing the park, we cautiously pedaled up Martin Luther King Jr. Way, a main thoroughfare through the city and many of its historic Black neighborhoods. Bicycling can be dangerous on MLK Way due to under-investment in safe biking and walking infrastructure in historically Black neighborhoods. But the street’s name is a sign of progress. Previously called Empire Way, the street was renamed in 1983 following years of lobbying by Eddie Rye, Jr., a Black activist and recipient of the Martin Luther King, Jr. Medal of Distinguished Service. 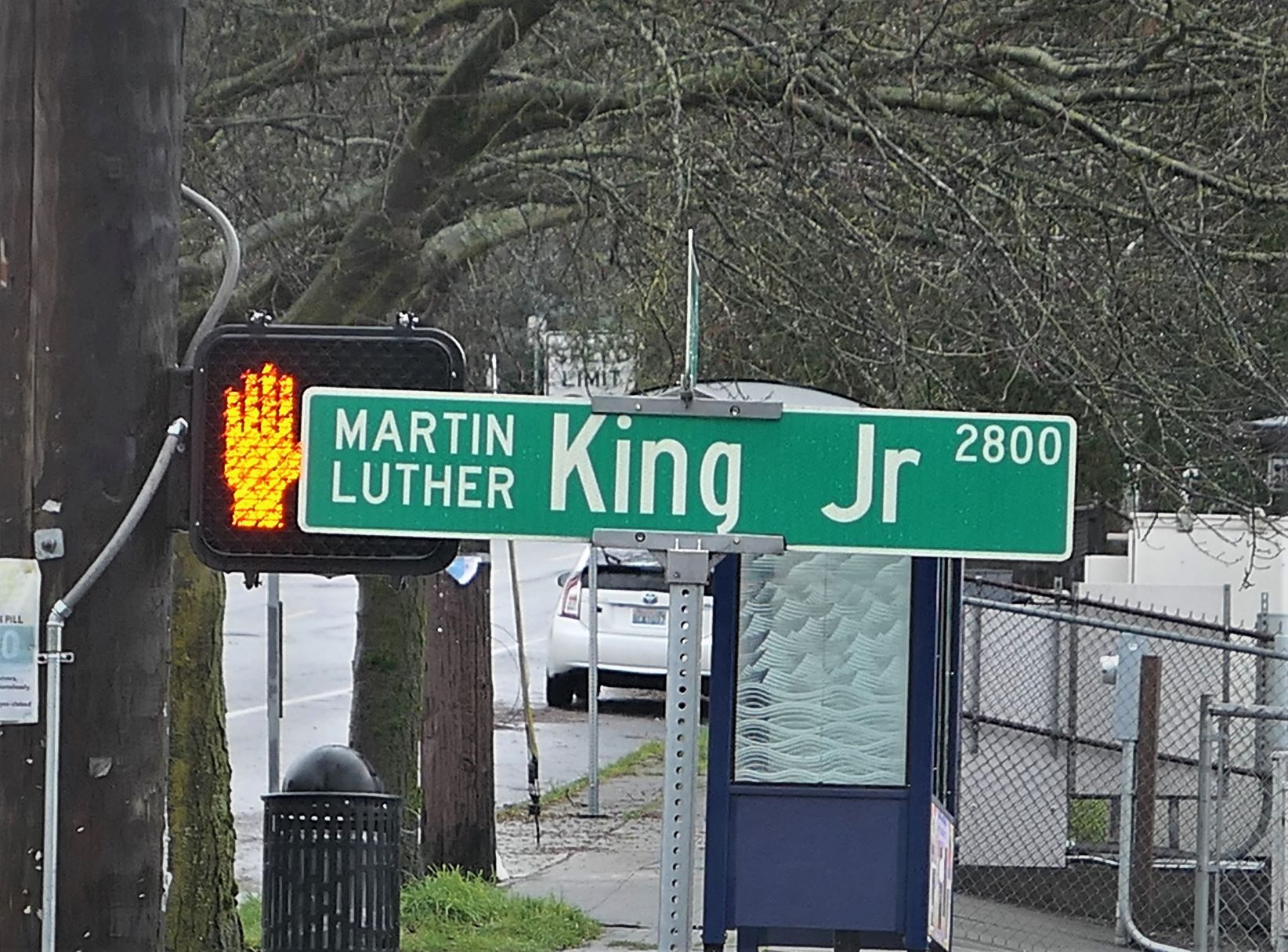 Our next stop was the intersection of MLK Way and Cherry Street in Seattle's Central District, the now-gentrified neighborhood where Black residents and businesses once dominated. There, a mural of Dr. King, painted by the artist James Crespinel, covers a brick wall on the building that houses the Fats Chicken and Waffles restaurant. Other murals of King can be found throughout Seattle, including one we spotted along Martin Luther King, Jr. Way at the intersection of Union Street. 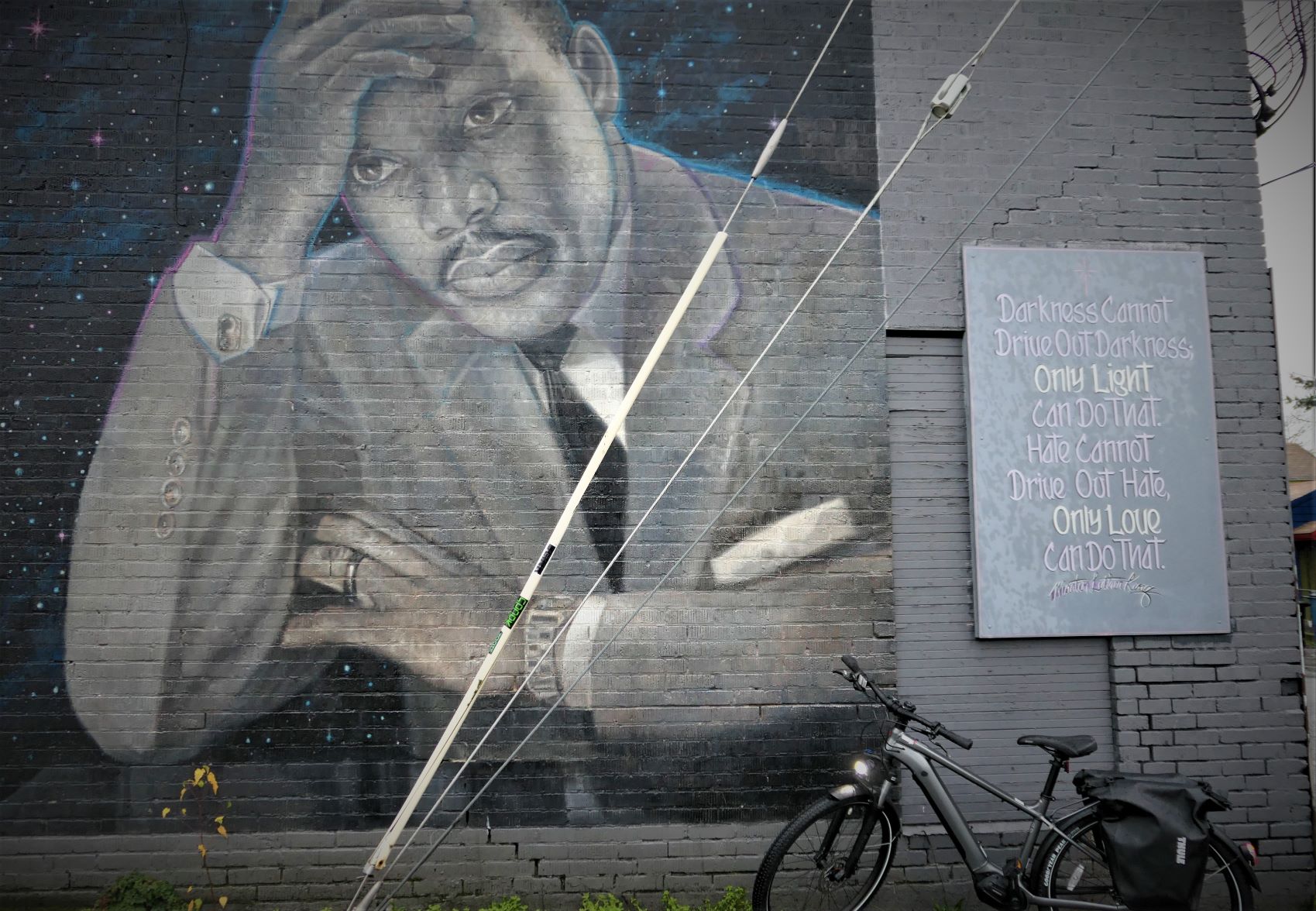 Our next destination was the Mount Zion Baptist Church, a historic Black church in the Seattle’s Central District that is “home to the largest African American congregation in Washington state.” 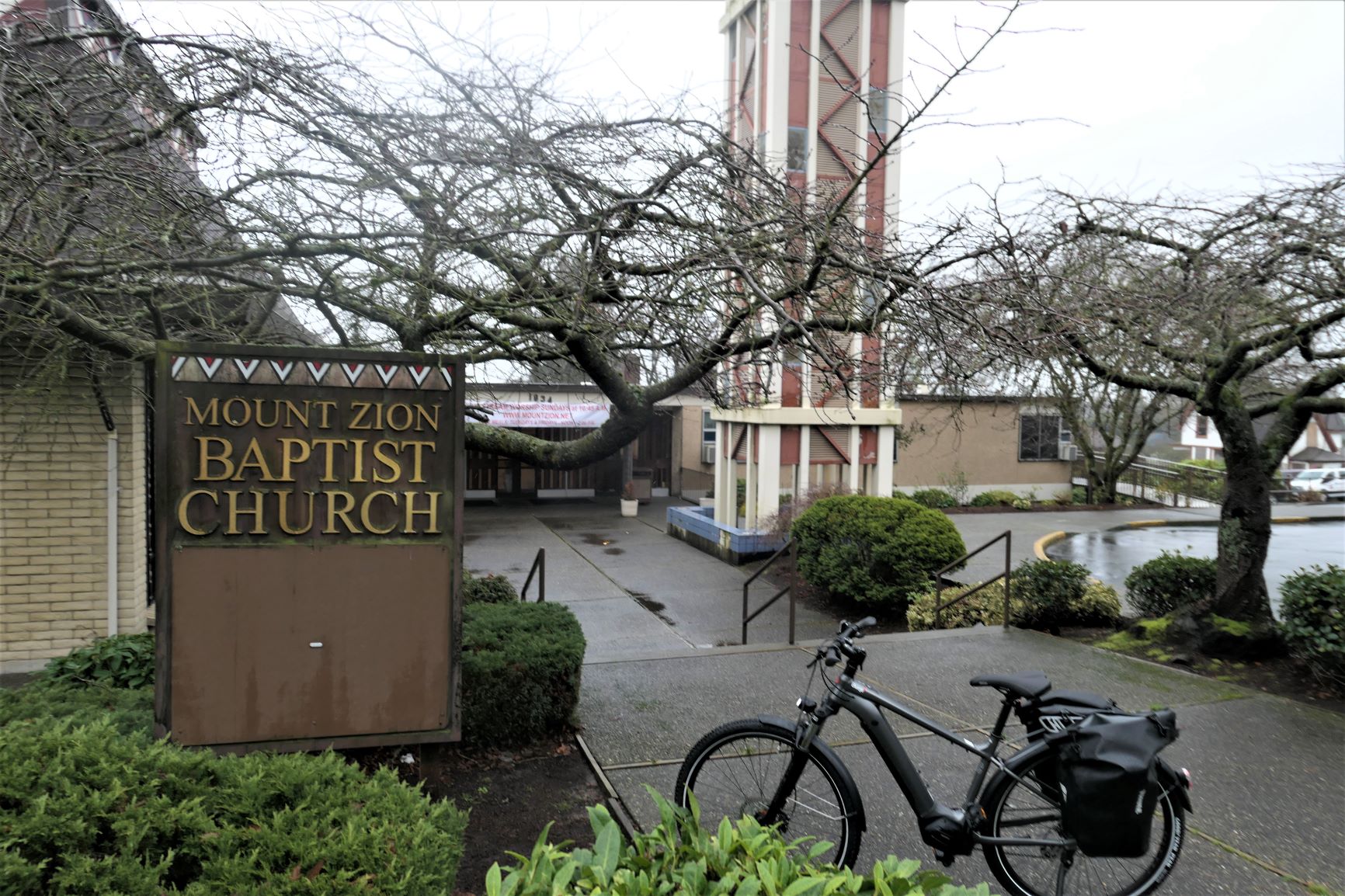 King visited Seattle at the invitation of Samuel McKinney, the late pastor of the Mount Zion church. The building was closed due to COVID-19 precautions, but a kind security guard allowed us to enter the lobby to photograph a bust of MLK behind glass in a display case. The bust of King is one of several located throughout Seattle created by sculptor Jeff Day to commemorate King’s visit. 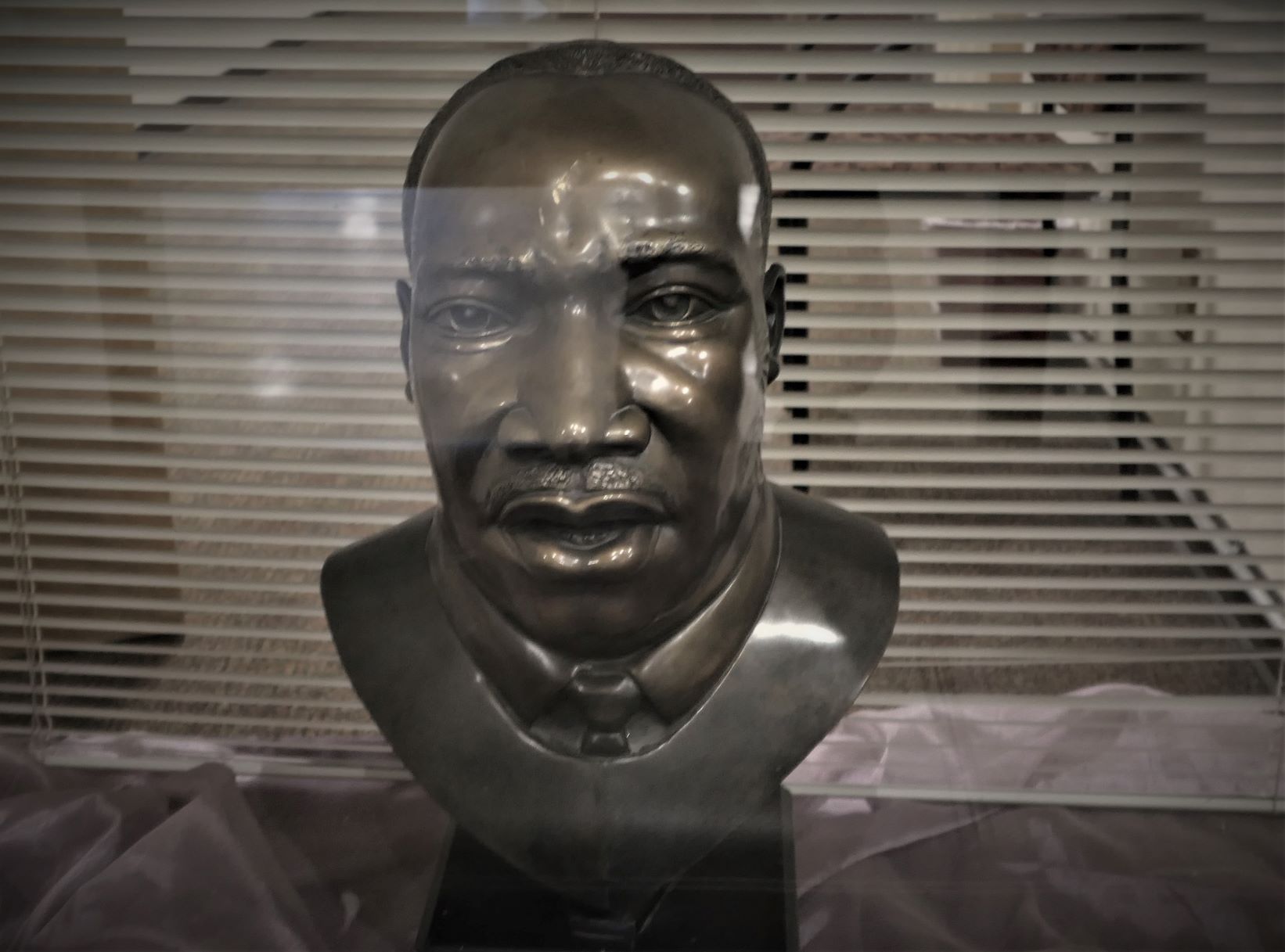 King arrived on Nov. 8, 1961, and stayed at the Olympic Hotel, now called the Fairmont Olympic Hotel. The next day he spoke to 2,000 students in Meany Hall on the University of Washington campus, where he received a standing ovation, and where another bust of King is located. That evening, he spoke at Temple de Hirsch Sinai synagogue, which extended an invitation after the First Presbyterian Church in downtown Seattle revoked its invitation to speak there following protests from white congregants.

On Nov. 10, King gave two daytime lectures at Garfield High School, a diverse school that serves students from a wide range of backgrounds, where he encouraged students to engage in creative protest. While there are no known recordings of his lectures in Seattle, McKinney and others have said that remarks King made in the Emerald City were later echoed in his famous “I have a dream” speech in Washington, D.C.

That evening, King spoke to a standing-room-only crowd at the Eagle’s Auditorium in downtown Seattle, now home to the ACT Theater, where another one of Day’s busts of King is on display inside. 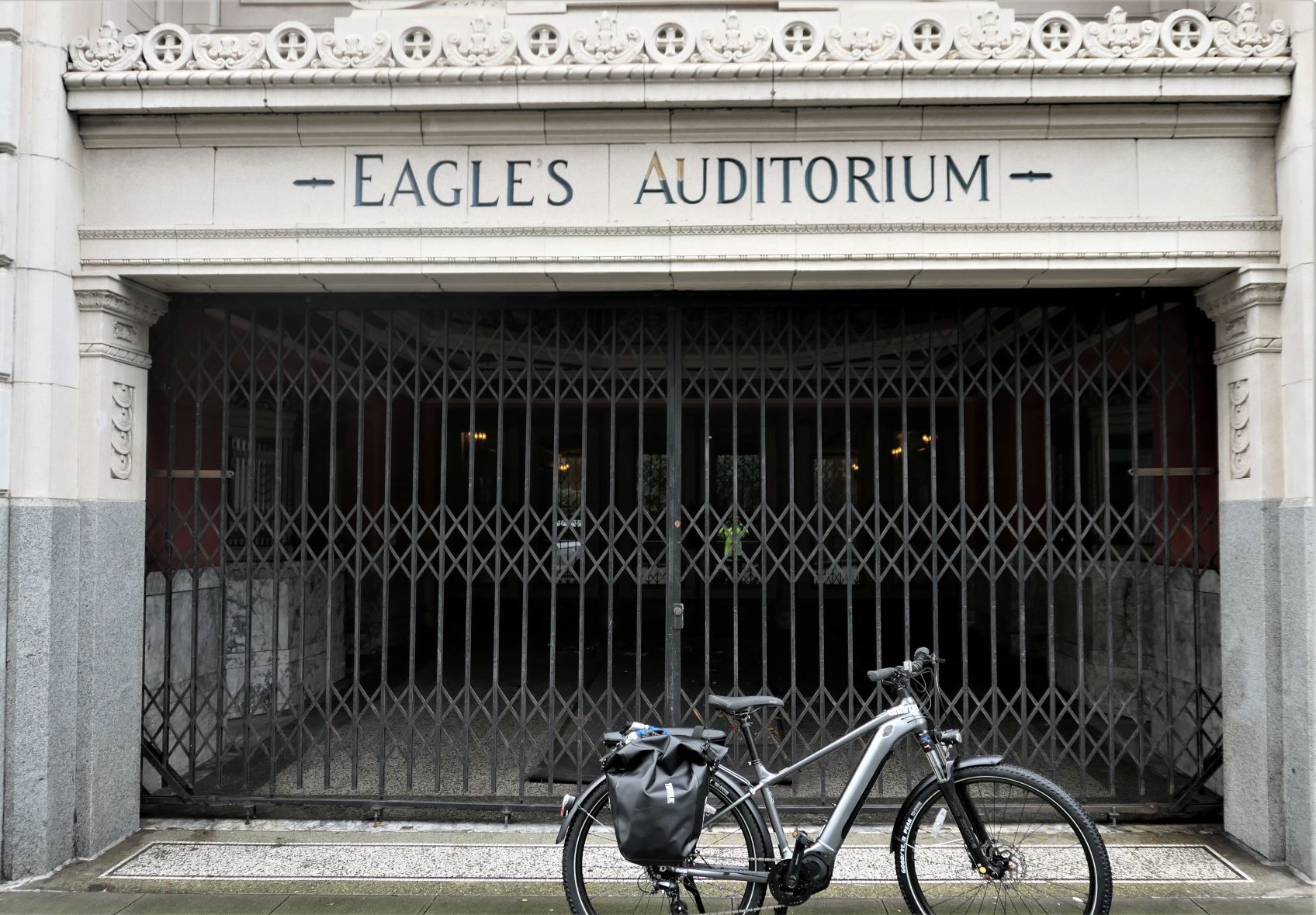 We pedaled downtown through pouring rain, hoping to get inside to see the bust, but the building was locked due to COVID-19. We peered through the fenced-off entrance to imagine the excitement of that historic day, when people thronged the sidewalks. 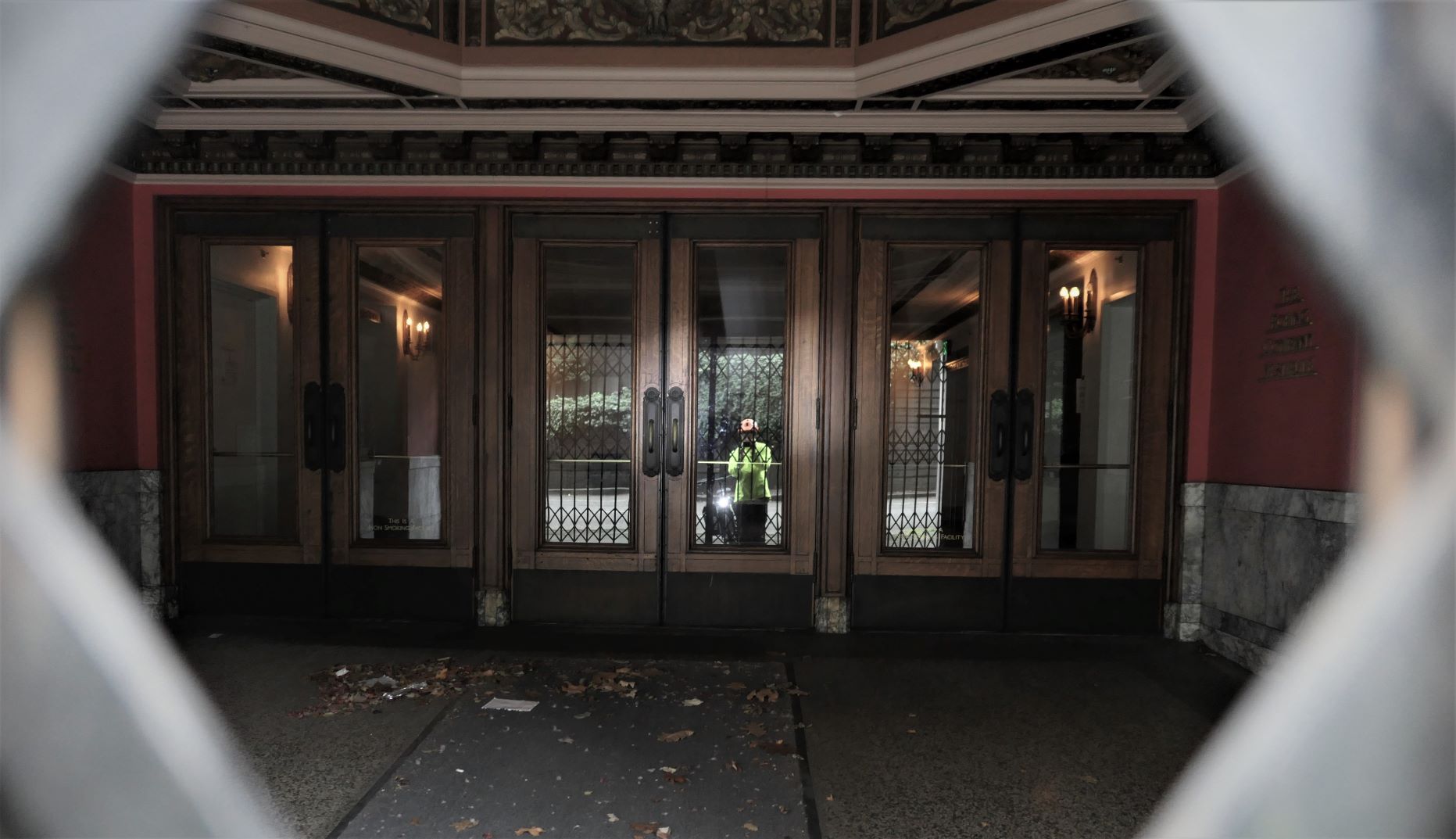 Just 32 years old during his visit, King had yet to give some of his most famous speeches, and he was not yet the larger-than-life individual who would galvanize the Civil Rights Movement prior to his assasination in 1968. Even so, King’s legacy looms large in Seattle and King County.

Originally named in 1852 for the slaveholder Rufus de Vane King, the King County Council passed a motion in 1986 to rename the county after MLK. Years of grassroots activism followed until the state Legislature officially adopted a measure, signed by Gov. Christine Gregoire on April 19, 2005, to rename the county in King’s honor.

In 2006, the county voted to change its logo to an image of King, and in 2007 the logo was unveiled at Mount Zion Baptist Church.

While King’s visit was short, it made an indelible impact on the Seattle region. Images of King are numerous, including another bust of MLK  on display at El Centro de la Raza. In 1974, the former Harrison elementary school was renamed the Martin Luther King, Jr. Elementary School. When the school moved to a new building, its former location was purchased in 2011 and turned into the MLK Family Arts Mentoring Enrichment (FAME) Center. 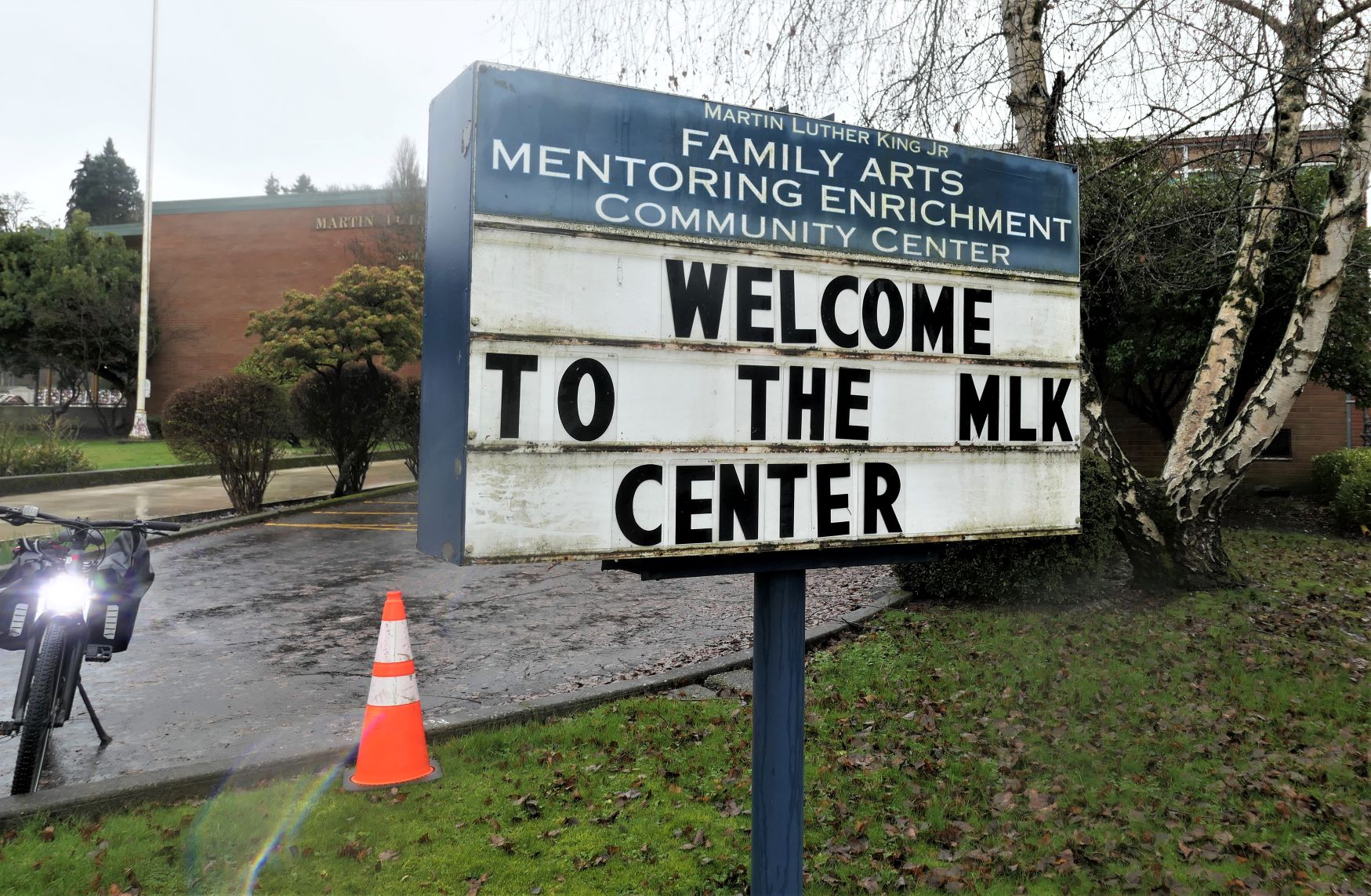 We pedaled by the FAME center, which was closed due to COVID-19, and admired a mural of King on a brick wall. 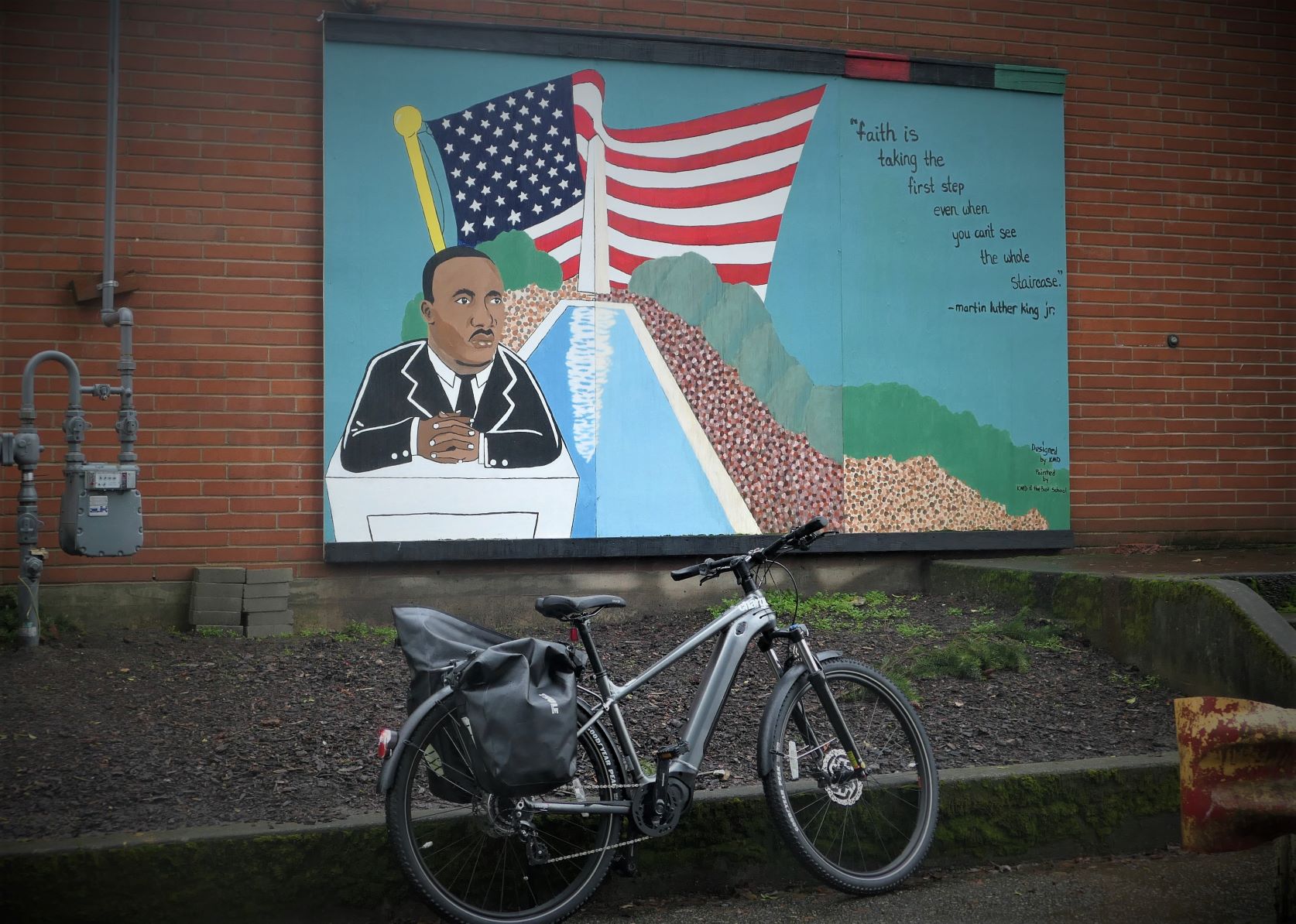 As residents of Seattle celebrate the MLK holiday, Cascade encourages people to create their own self-guided bike tours of Seattle locations to learn about King’s legacy and teachings. We recommend starting at El Centro in Beacon Hill, pedaling through downtown to visit the theater, and beyond to the Central District to see the murals and Mt. Zion.

On Wednesday, the Peace Peloton, which is devoted to economic reform for Black people, will hold a “Fresh Air” ride from Pioneer Square to the Central District to mark the inauguration of a new president, and work to advance the goals King outlined 60 years ago. 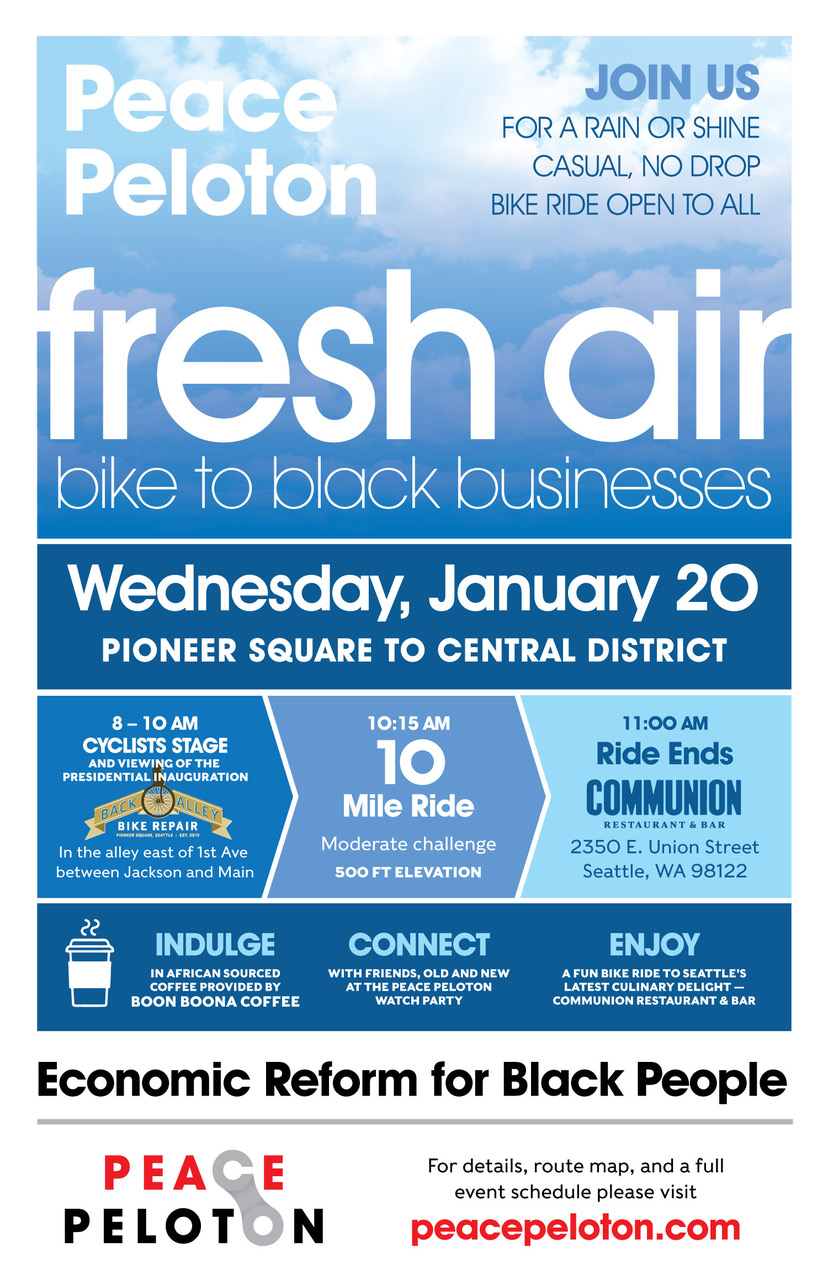 "Dr. King's words and lessons are incredibly relevant today in the wake of the growing movements around equity for all, in particular, Black people," says Reginald "Doc" Wilson, co-founder of the Peace Peloton. "As bicyclists, we should remember that Dr. King was a peaceful warrior for transportation equity through his leadership of the Montgomery bus boycott, which held that Black people should not be required to take a back seat."

"While we have made progress, it is clear when riding a bike through Seattle's historically Black neighborhoods today--or even down MLK Way--that BIPOC neighborhoods continue to take a back seat when it comes to safe bike lanes and cycling infrastructure," Wilson says. "The data also shows that people of color riding bikes also get ticketed and hassled by police at a higher rate for not wearing a helmet. The bicycling community in Seattle and King County can advance Dr. King's legacy by pushing to make bicycling safer and more equitable for all."