The mayor's proposed 2021 budget cuts funding to the highest priority bike safety projects, and fails to support the pedestrian and transit options we need. But the City Council is advancing budget amendments that would restore funding to essential safety and mobility projects. Take action now to let Seattle leaders know you support these amendments, and that we can’t afford to wait for key transportation investments.

The mayor proposes cutting nearly $21 million in funding for high-priority projects in next year’s budget, which would have profound impacts on our ability to get around Seattle safely by bike, bus, and on foot, while also reducing Seattle’s ability to take on the climate crisis with a just and racially equitable response. We need your help to get this funding restored. Cascade, and our transit and environmental partners in the MASS Coalition, are asking the City Council for a handful of essential changes to the budget to keep all Seattle residents moving safely. Join us now.

If you are a Seattle resident, contact your City Council member to support funding for these initiatives:

Additionally, we are asking the City Council to retain some important investments in the mayor’s draft budget. They include: 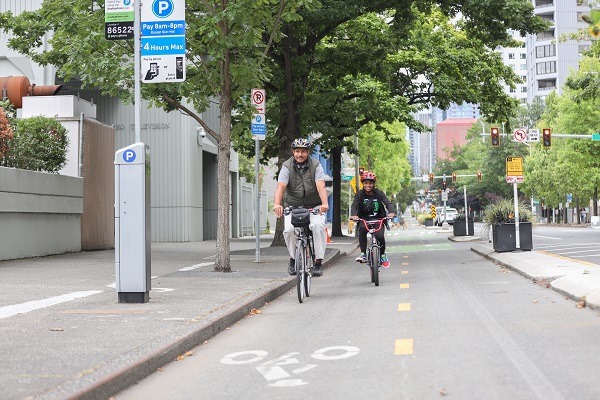 While these budget amendments won't fully remedy the more than $20 million in cuts and delays to biking, walking and transit projects, they keep the most vital components of the bike and transit networks moving forward.

The Georgetown to Southpark Trail is a longstanding community priority, progress for which has been halting and hard-won by community advocates.

A safe, all-ages bike connection through the Rainier Valley has been delayed for years. A safe and comfortable bike connection between Georgetown and Downtown through SODO is critical to the many people who already bike that route, and to others who would if it were safe. This year, planning for these two important South Seattle bike routes was put on hold despite being highlighted last year as the highest need by community members who gave input on the Bike Master Plan Implementation Plan. Delaying these crucial projects will harm South Seattle communities that need and want safe bike routes.

This has been the year of the bicycle as people turned to bikes in record numbers for respite and transportation. Now is the time to speak up on behalf of safer bike routes that Seattle sorely needs. We must ensure that residents and workers throughout Seattle can safely get where they need to go. We can’t do that without your voice.