What does a bike rider look like? Like Marley Blonsky, who is at the forefront of a movement to make bicycling more welcoming to people of all body types. With an adventure video in the works, speaking engagements, and success in urging bike brands to make cycling apparel that fits, she is on a roll. 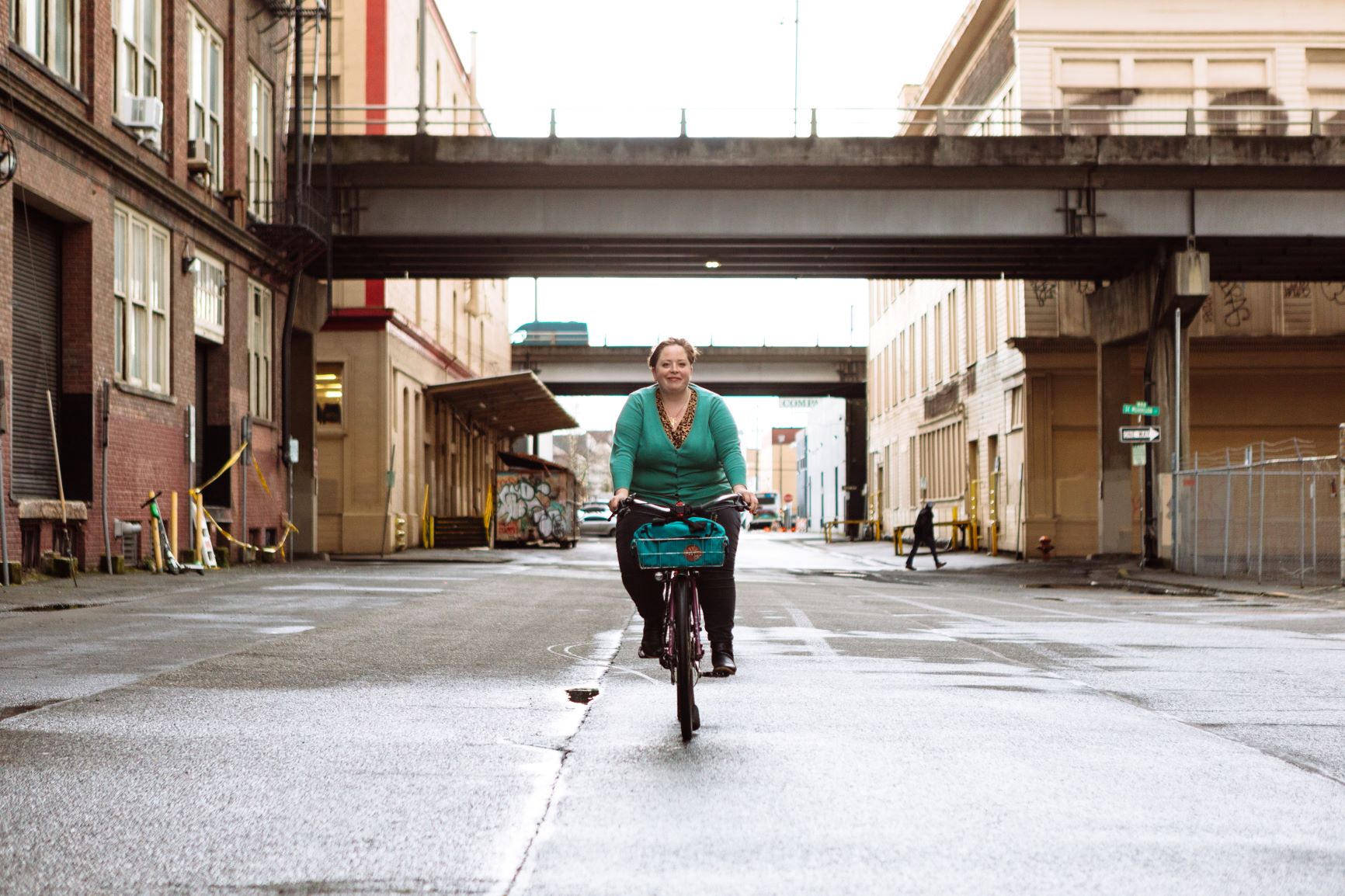 In the past, self-proclaimed “fat bicyclist” Marley Blonsky is not the type of bike rider who would have been featured in bike industry videos, photographed for newspaper articles about bike touring, or invited to speak at national bicycling conferences.

Now, Blonsky is at the forefront of a movement to shatter stereotypes about what bike riders look like, and to make bicycling more welcoming to individuals of all body types, races, ages, abilities, and gender identities.

“Cycling historically has been very mono-cultural,” says Blonsky. “We are not all that svelte, featherweight rider. I want to show that biking can be fun regardless of what kind of body you are in.”

Blonsky will be a featured speaker at the Washington Bike, Walk, and Roll Summit, Oct. 5-9, which will be held virtually this year. She will appear on a panel entitled “Inclusion in the Cycling Community.” The full summit agenda will be posted within the next few weeks. 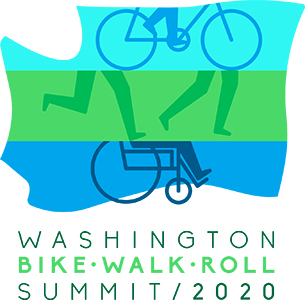 “I’ll talk about how bike clubs and bike groups can be more inclusive of people in larger bodies,” says Blonsky, a Seattle resident who works as a sustainability manager for a logistics company when not riding.

Blonsky began bicycling regularly in 2014 after getting a divorce, moving to Seattle’s Capitol Hill neighborhood, and selling her car. She was taking the bus to work daily, but “I saw all these cool people riding bikes and I thought, ‘I want to do that.’ So I got my first commuter bicycle.”

She tried group road riding but it didn’t appeal to her due to the fast pace and focus on mileage goals and speed. That’s when she discovered bike camping and bike touring. “I don’t ride for miles or speed. I ride for fun and to explore, and for the social aspects of it.”

Some of her favorite bike trips include a multi-day tour of Victoria Island in British Columbia, Canada; as well as tours through Glacier National Park in Montana and a 60-mile loop in Oregon with friends to celebrate her birthday. 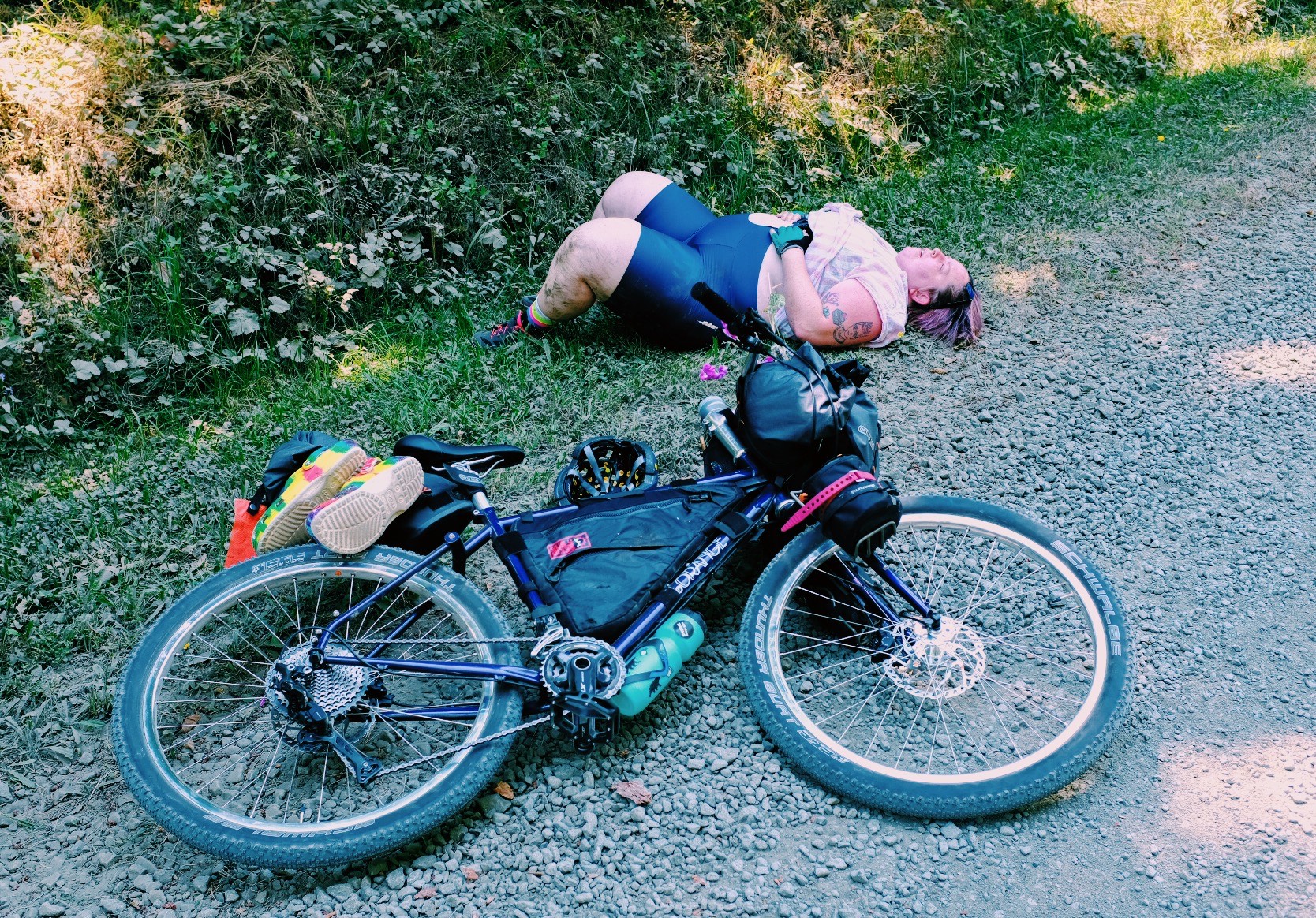 “Bicycling is not a one-size-fits-all activity.”

For bike riders with larger bodies, finding technical bike clothing that fits is still difficult, but Blonsky says there has been progress. She cites companies including Pearl Izumi and Machines for Freedom as brands that have begun offering Plus sizes within the last year.

“Biking should feel like a sport that is accessible to everyone,” says Randy Johnston, Pearl Izumi’s product manager for road apparel. The company this year expanded its size offerings in ten of its most popular styles based on feedback from Blonsky and others. “We’re always looking for ways to get more people into biking, and part of that is making clothing that comfortably fits larger riders.”

Later this year, Blonsky and Kornhauser will be featured in a video funded by Pearl Izumi and its parent company, Shimano, which will document a two-day ride the women took in Oregon, riding 60 miles from Corvallis to the coast. “It was a lot steeper than I expected, with a lot of elevation gain, so there was a lot of walking up hills,” says Blonsky, who wants to dispel the notion that people who ride bikes should be fast. 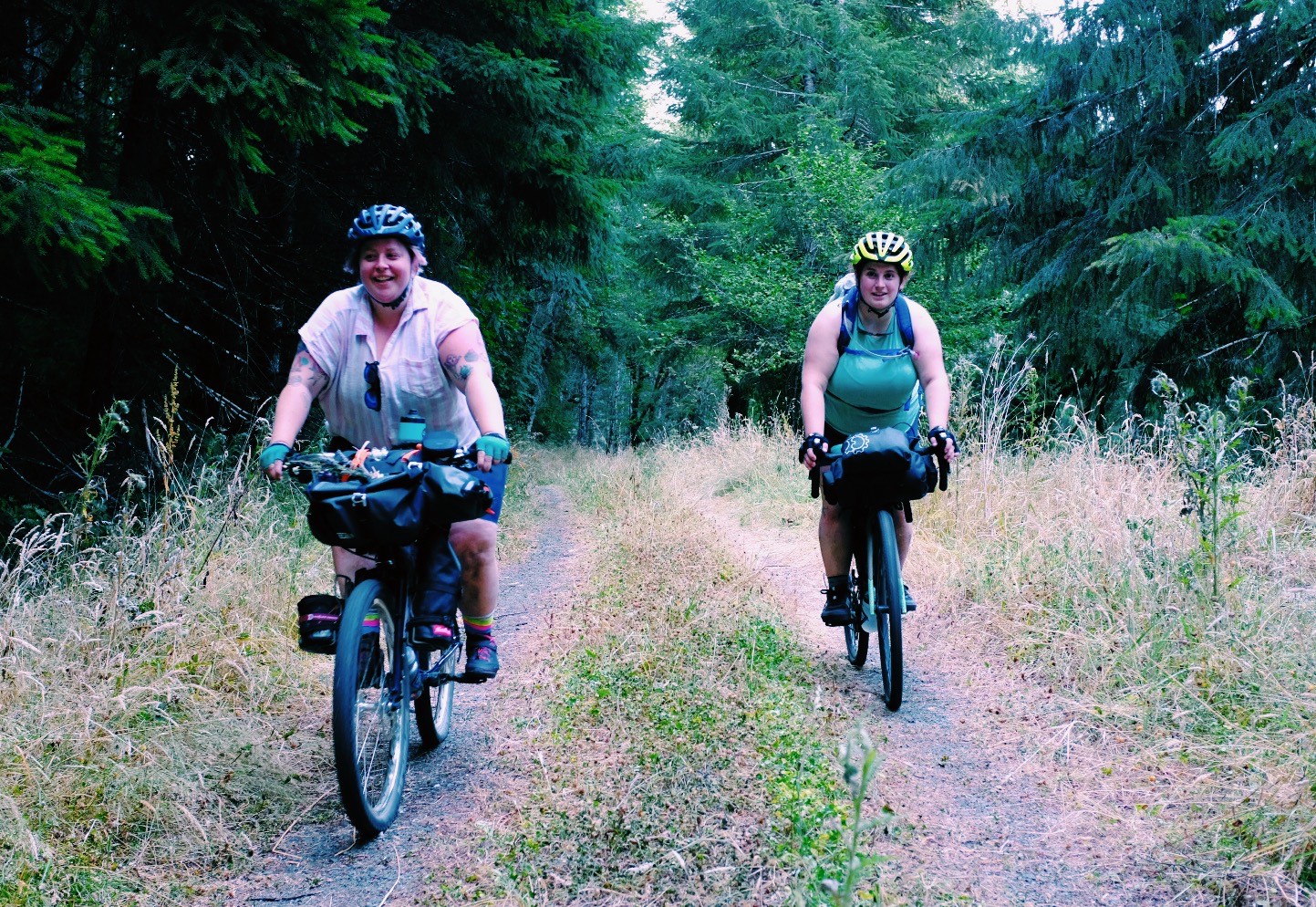 Blonsky and Kornhauser during the video shoot in Oregon. Photo credit: Zeppelin Zeerip.

“I like to stop and look at the birds and scenery, and stop to get ice cream,” says Blonsky, whose favorite Cascade rides are the Emerald City Ride, the Seattle Night Ride, and the Seattle Bike ‘N Brews, all of which are events that use bikes as a tool for socializing, fun, and exploration. “You can be a lifelong rider but still ride slowly.”

And let’s set one thing straight: losing weight is not the goal of bicycling for Blonsky and many other people with larger bodies. Even so, some commenters on social media still offer diet advice or make disparaging remarks. “I don’t tolerate BS like that,” she says.

Blonsky says the word fat can be uncomfortable for “straight-sized” people because of pervasive fatphobia in our society and because the word is often used pejoratively. “It’s all in the context of how you use the word. We all have fat in our bodies and some of us have more than others. For folks who aren’t fat, if they aren’t comfortable with the word, maybe ‘people in larger bodies’ is a kinder or gentler way to say it. But for me, using the word fat is a way of owning it.”

Blonsky calls herself an “accidental activist.” It began three years ago when she attended a WTF Bikexplorers summit, a gathering to support people who identify as women, transgender, queer, femme, and/or non-binary, and who use bicycles to explore. Even in this highly supportive and forward-thinking environment, Blonsky says, “there was a lot of discussion about inclusivity, but nobody was talking about body size.”

That revelation led to many speaking engagements and Blonsky’s rising status as a spokesperson for the body positivity movement in cycling. She has been interviewed by the Washington Post, People for Bikes, and multiple bicycling blogs and media outlets. 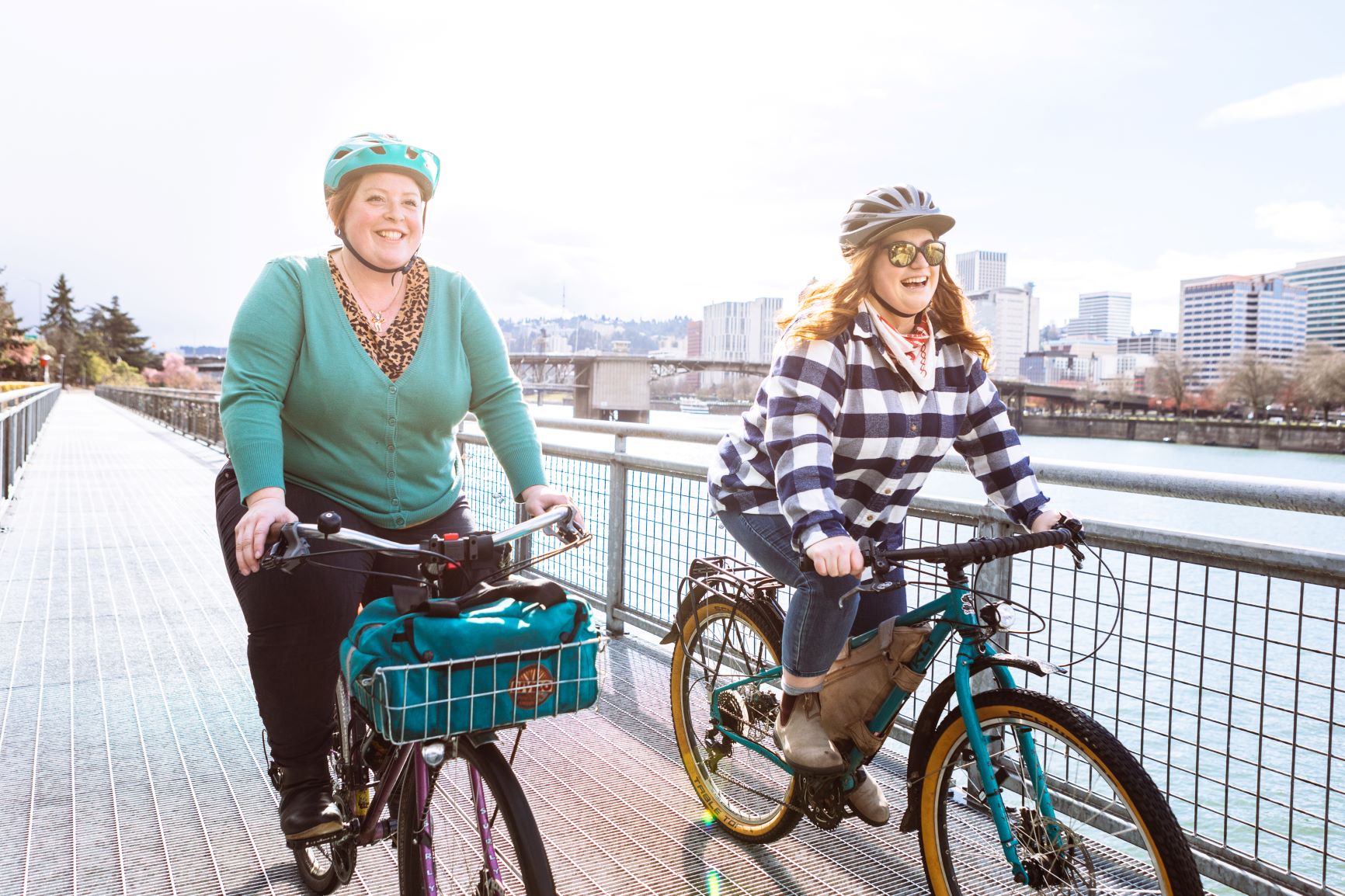 At the Washington Bike, Walk, and Roll Summit, she will appear on a panel along with Tiffani Young of No Limit Riderz, and Maggie Vincent of Wheelhouse Community Bike Shop.

Previously called the Washington Bike Summit, the event is an annual gathering of advocacy and policy experts organized by Cascade and Washington Bikes. The name change reflects a desire to strengthen alliances between advocates for all forms of human-powered transportation--whether pedaling a bike, rolling on skates or a wheelchair, walking, or hiking.

Originally scheduled for April but postponed to October due to COVID-19, the 2020 Summit will for the first time make the topics of diversity, equity, and inclusion the overarching theme for every panel and presentation. Other Summit speakers will include a range of individuals of different racial and gender identities and ages who are involved in initiatives related to increasing participation and creating more safe places to bike, walk, and roll.

Click here to learn about, register for, or apply for a scholarship to the summit.

Learn more about Blonsky and her riding tips on her website and Instagram feed. And watch the video interview of Blonsky on Seattle Bike Blog.