Bicycles are on the front lines of the Black Lives Matter protests. 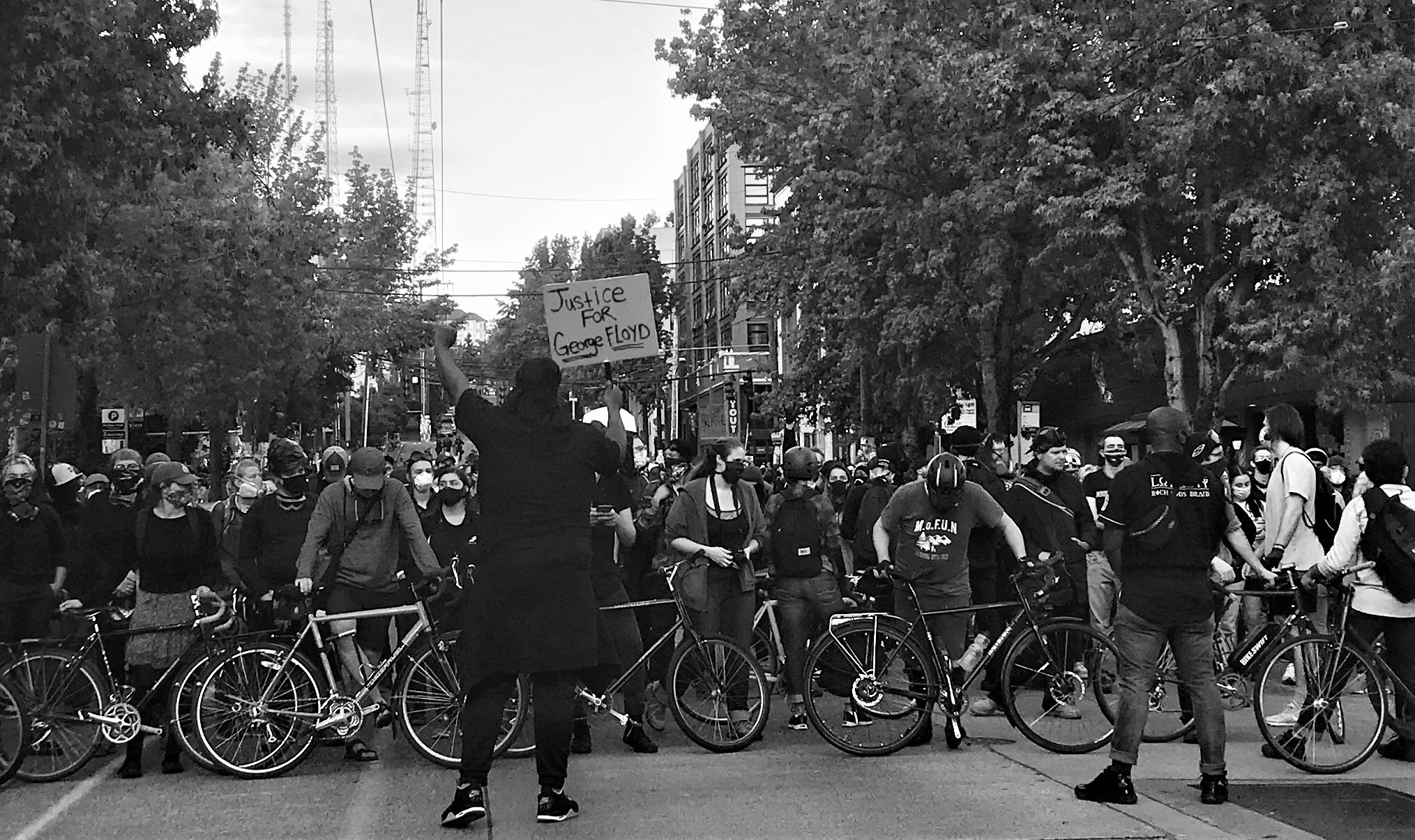 It was a powerful symbol of unity: A line of Black Lives Matter protesters stood with their bicycles, blocking the street, fists raised, using their bikes to shield marchers from police.

They call it “mirroring,” creating lines of bikes that mirror the police lines and create a buffer zone.

“We are trying to help create a safe space for the people we are supporting, people of color and indigenous people, so they can make their demands and speak their minds,” said Josh White, who sat on his bike in Cal Anderson Park on Thursday afternoon with two friends also on bikes. “We are here to support and amplify their voices.”

Bicycles are on the front lines of the protests that have roiled cities across the United States in response to police brutality and the killing of George Floyd, Breonna Taylor, and other Black Americans. In addition to allowing protesters and their supporters to quickly get around the city and blocked streets, bikes are being used to direct and protect the large crowds numbering in the thousands.

“Bikes have been truly useful in directing crowds and managing traffic in front of and behind the groups of marchers,” said Jackson Hern, who sat on his bike alongside White in Cal Anderson Park. “Bicycles are the first and last thing on all the parades. We ride ahead and clear all intersections ahead of the marchers and protect the rear. Sometimes groups of a few hundred people will break off to march in a different direction, and we will accompany them.”

Supporters of the protests have taken on many roles. Some provide food, water and coffee. Others provide medical assistance. “For us on bikes, we are taking on the role of protecting the processions,” Hern said. He estimated that about 200 people with bikes had participated the night before. 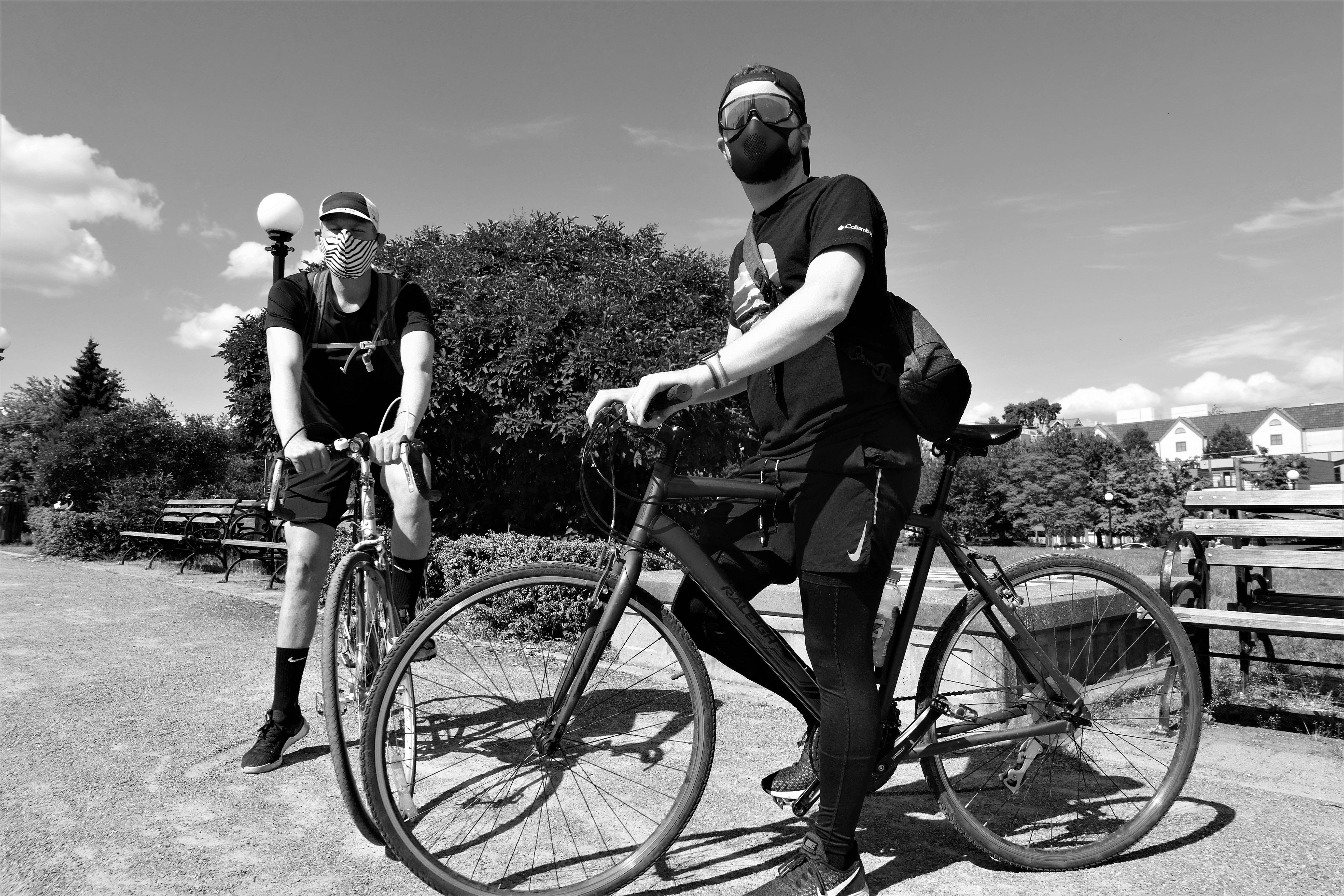 On one occasion, a car broke through the line and was proceeding toward marchers. “We were able to use our bicycles to divert the car to a side street where the person was immediately arrested,” Hern said.

As Hern, White and friends pedaled away to join the marchers, I pedaled my bike to a side street adjacent to Cal Anderson Park where a bicycle mechanic, who asked to be identified only as Bicycle Guy, had set up a mobile repair shop. Bicycle Guy had placed two repair stands on the side of the road beside his toolbox, boxes of tubes and tires and a cardboard sign on the roof of his car offering “Free Repairs.”

Bicycle Guy said he wanted to use his bike knowledge to support protesters. “We’ve got road and mountain bike cables, brake and derailleur housings, ferrules, fasteners, and a lot of inner tube patches, headset spacers, seat post bolts, things like that,” he said, wearing a black mask. The previous night he worked on about 15 bikes--everything from pumping up tires to repairing derailleurs, lubricating shifters and replacing brake cables.

“I just want to play a supporting role here,” Bicycle Guy said. “Pretty much everyone riding a bicycle in Seattle needs some type of maintenance. Regardless of how people are using their bicycles as part of the protests, they can certainly use an adjustment to make their bikes safer.” 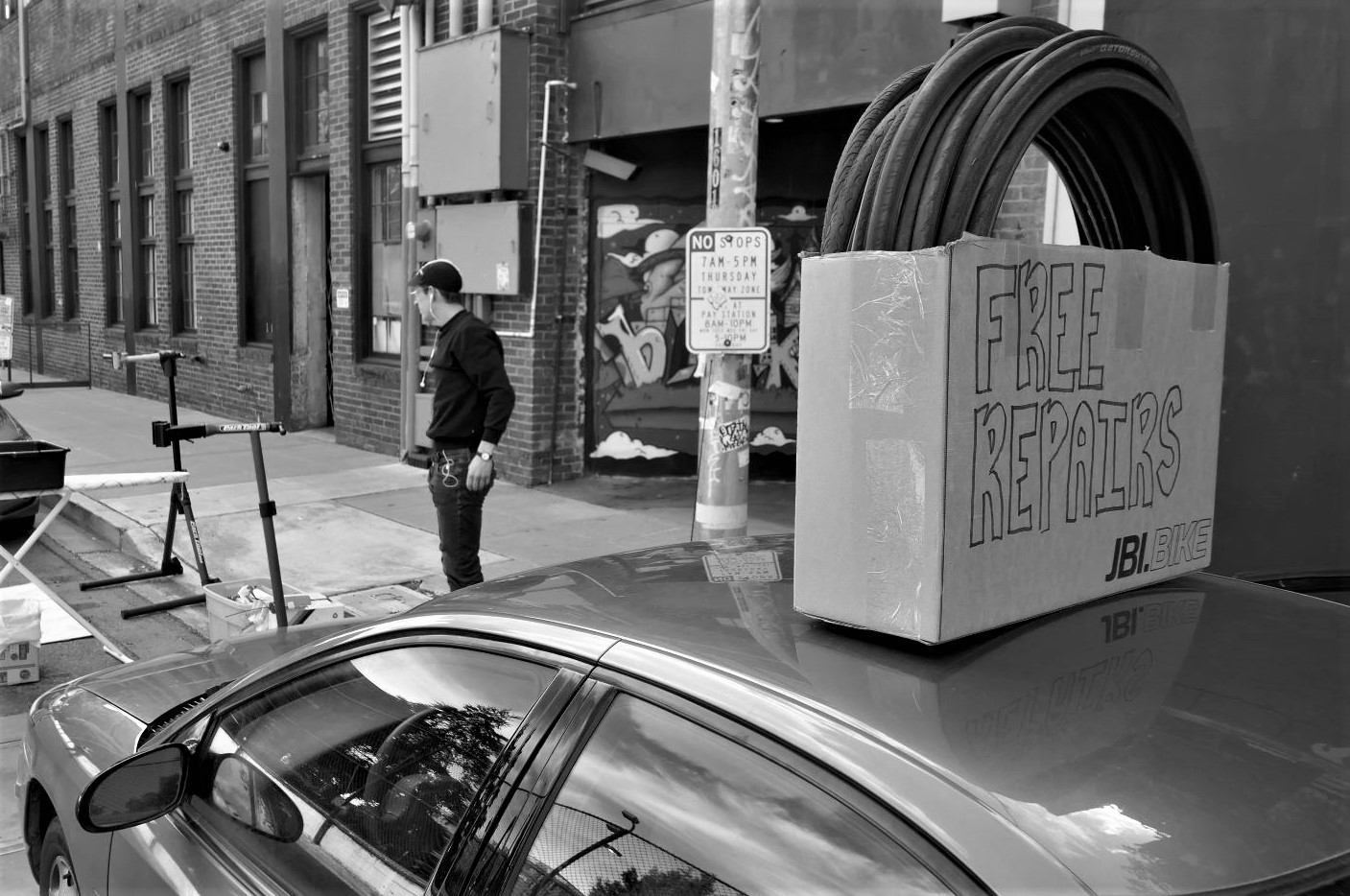 For those of us who believe bicycles have the power to transform lives and communities, their use for peaceful protest is inspiring. Unfortunately, news reports are also filled with images of police using bicycles offensively against protesters, holding them in the air to push forward into crowds. These opposing uses are a reminder that bicycles are just tools, inanimate objects that can be used to build and unite--or to smash and divide. What matters most is the heart and mind of the person using the bike.

As the protests continue in Seattle and across the nation, Cascade Bicycle Club is heartened by the unity that people on bicycles have shown in supporting the Black Lives Matter movement. Cascade supports Black Lives Matter and stands with the protesters in opposition to police brutality, violence and injustice.

For Cascade members looking to learn more about the movement, we have posted some resources on our blog and will continue to share more policy solutions for people to learn from throughout Bike Month. On Saturday, June 6, a "Peace Peloton" of people on bikes was planned for West Seattle. And protesters were planning to rally near Cascade headquarters in Magnuson Park.