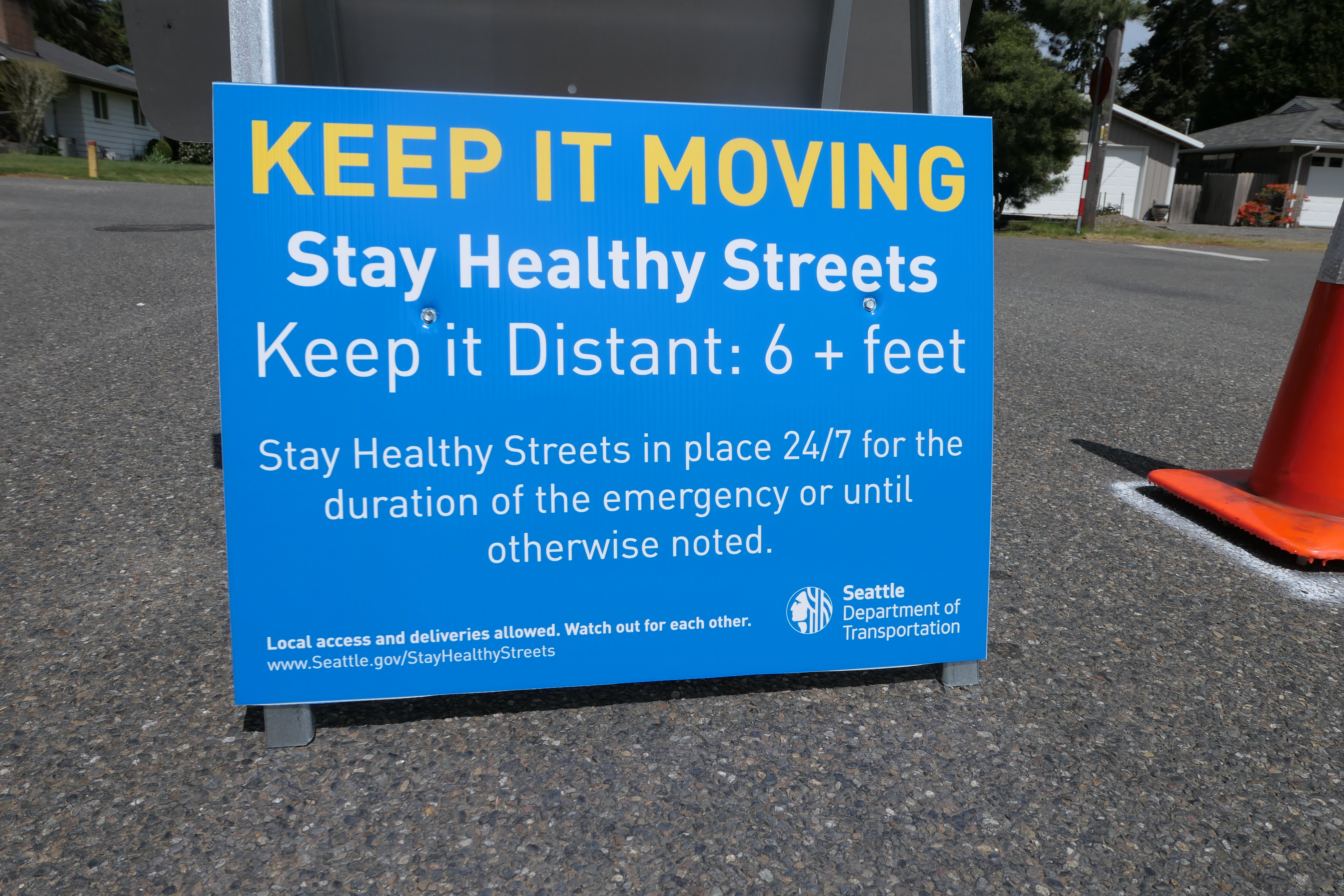 The “Street Closed” signs showed up early the morning of May 1 in Seattle’s Lake City neighborhood, and within a few hours people were out walking their dogs, riding bikes, pushing baby strollers and enjoying the ability to walk down the middle of the road without cars.

“It’s awesome,” Erik Waters said of the Lake City street closures, which covered a roughly one-mile section of quiet neighborhood streets between NE 125th Street and NE 145th Street. Waters lives nearby and was taking a spin during his lunch break, pausing briefly to answer questions from six feet away. “People want to get outside,” he said, and the street closure “helps people to stay separated and safe.”

The Lake City segment is one of the newest additions to the city’s Stay Healthy Streets initiative, which as of this writing encompassed 20 miles of street closures in neighborhoods across Seattle. The street closures were initially temporary, but Seattle Mayor Jenny Durkan later announced they will be permanent. It was big news, and part of a growing national Open Streets movement to create more car-free spaces for people to walk, bike and recreate safely during the pandemic and beyond.

Mounted on metal legs and accompanied by orange cones, the “Street Closed” signs partially blocked every intersection and traffic roundabout and were accompanied by blue Stay Healthy Streets placards that explained the street was “open for people to walk, roll, bike, run, and skate. Local access & deliveries OK.”

A few cars rolled through at slow speed, as is allowed for residents to access and depart their homes, but through-traffic is banned. Most of the users in Lake City, including Hollis Miller, were walking. “It seems like a really good idea to give people more space to be out on the streets and give them plenty of room,” Miller said. 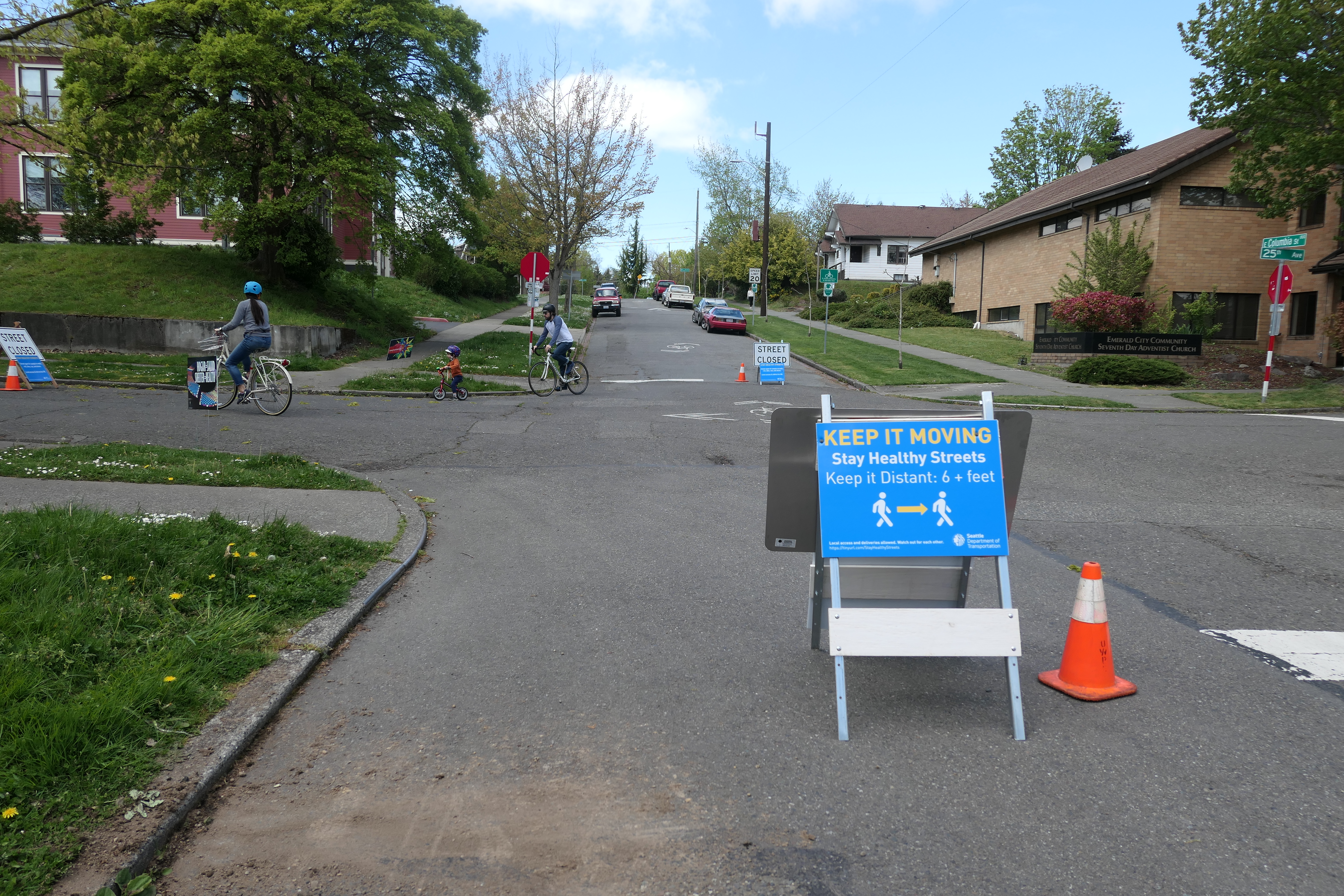 “We applaud the city for expanding its network of safe routes for people to bike, walk and roll,” said Vicky Clarke, Cascade’s policy director. Encouraging Seattle and other Washington communities to open more temporary biking and walking routes is one of Cascade’s top policy objectives during the COVID-19 crisis.

After checking out the Lake City route on Friday, I decided to bicycle over to another Stay Healthy Streets route on Sunday to see how people were using it. My wife and I typically pedal to her father’s home on spring and summer weekends to tend a garden patch, and we made a short detour to ride through the Stay Healthy Streets route in the Central District. We connected at the intersection of Martin Luther King and Columbia, passing by the Street Closed signs and pedaling up Columbia at a slow pace, making way for walkers and joggers. We took a left onto 25th, continuing for about 10 blocks of open streets with signs at every intersection. 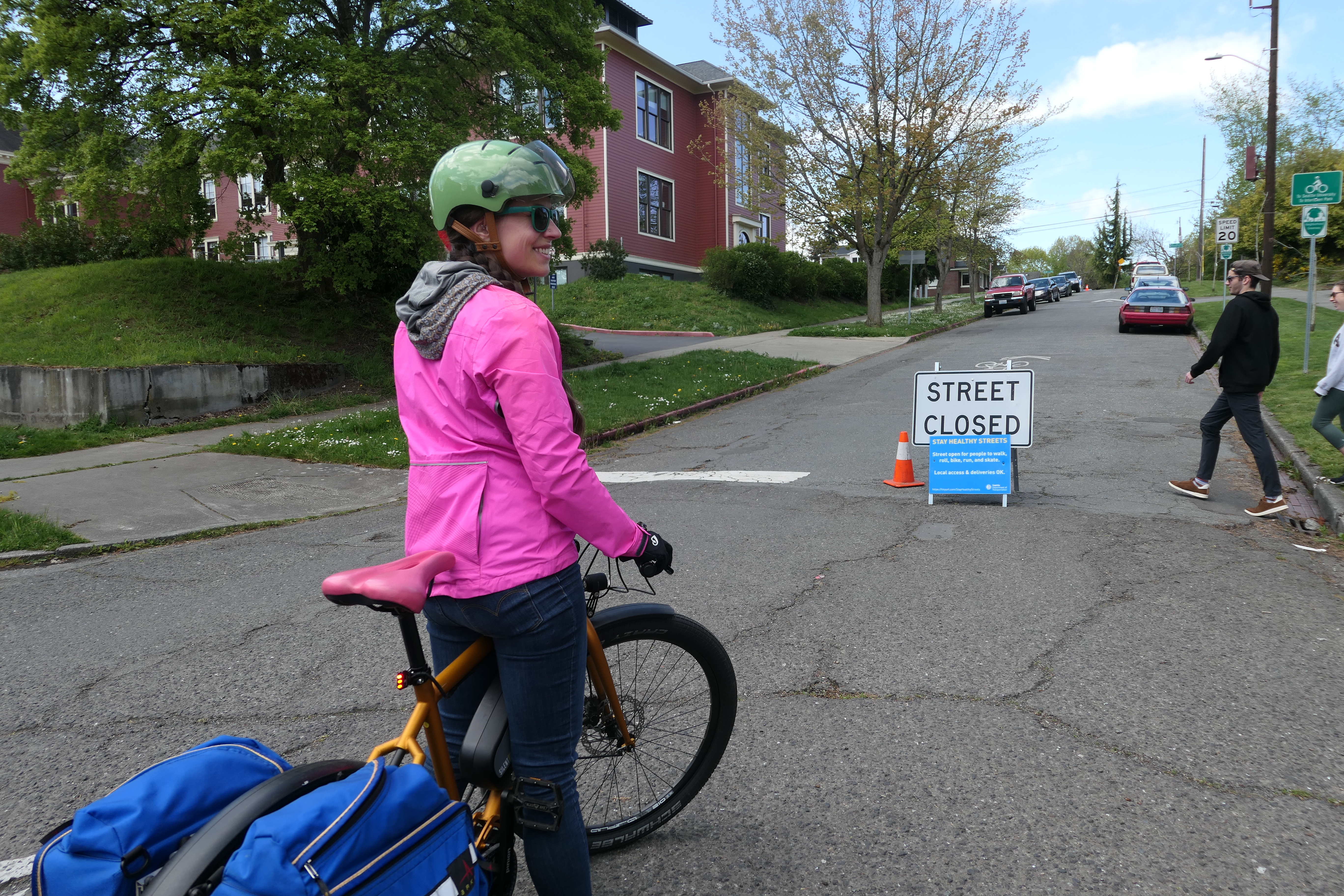 The Central District Stay Healthy Streets segment is extensive, with a T-shape, and a new segment recently added that extends northward and connects with a Neighborhood Greenway. Many of the Seattle Stay Healthy Streets intersect with or run adjacent to Neighborhood Greenways, slow-traffic roads marked with bicycle “sharrows” and signage. As with Lake City, walkers were the most common users, with some parents and pedaling with young children and a group of women riding with multiple kids.

“We are very supportive of this,” said Maria Monroe-Devita, who was enjoying a bike ride with her husband and their children, ages seven and nine. “We are just going through the neighborhood while the sun is shining because it’s supposed to rain.” She jogs many days, and says having no cars on the Central District route makes it easier to take the middle of the road when people are on the sidewalks. “We heard there are more streets opening, and we are fully in support of the city expanding this,” she said. 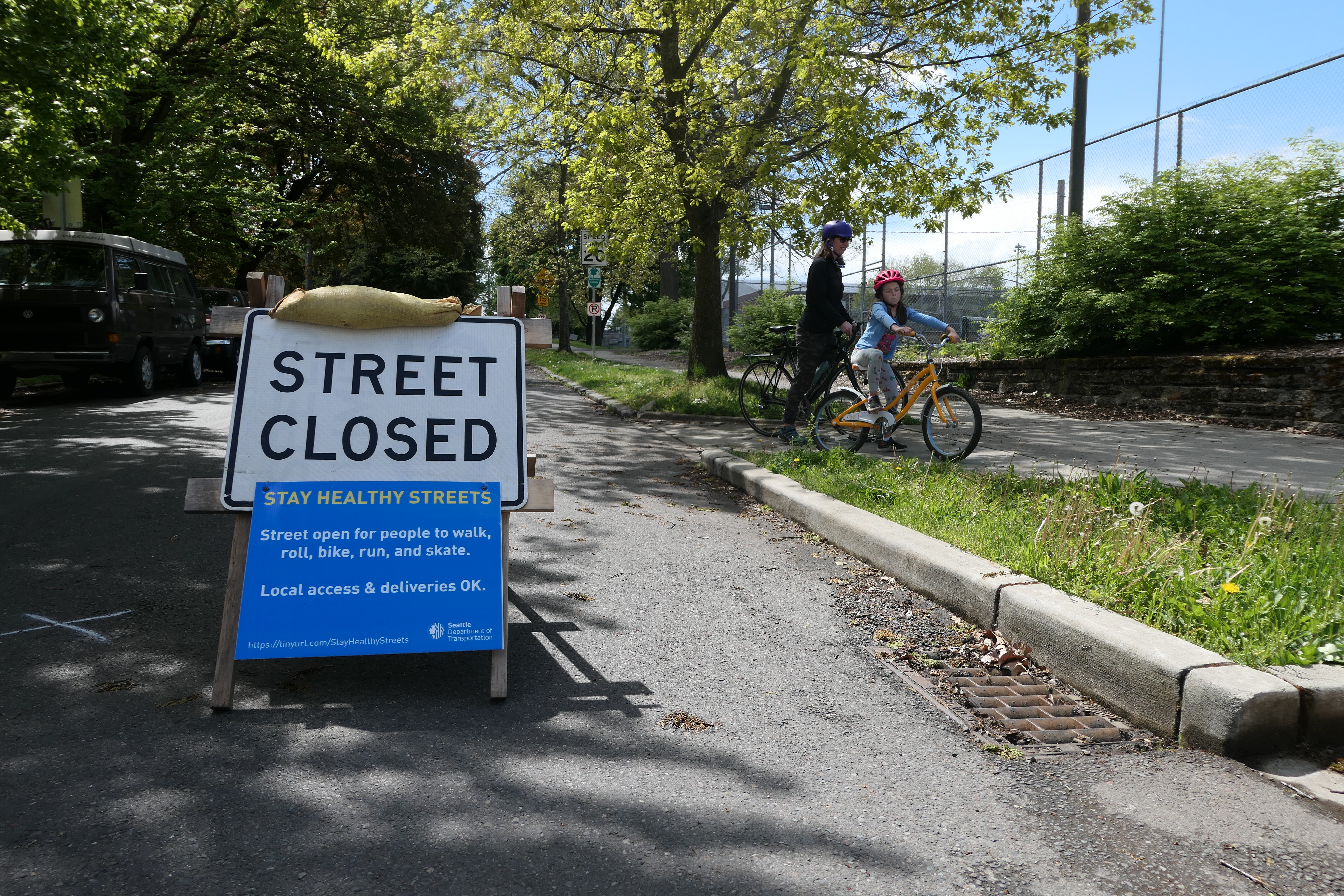 Other Washington communities creating these so-called “pop-up” open streets include Edmonds, which banned parking and through-traffic on a popular portion of Sunset Avenue along the city’s waterfront, and Bellevue, which planned to open two Healthy Streets on Thursday along SE 4th Street and on a stretch encompassing a portion of 165th and 166th Avenues NE.

Other cities that have committed to large street closure programs include Oakland, which has promised to set aside 74 miles as part of its Slow Streets initiative. New York City’s mayor has announced plans to create 100 miles of open streets this month, while Denver, Minneapolis and San Diego have implemented open streets programs.

“We are encouraged by the positive community reception and initial success of the Stay Healthy Streets program,” Seattle Department of Transportation spokesperson Ethan Bergerson said.

Cascade supports the continued expansion of Safe Healthy Streets, and the nonprofit has outlined four principles, generated from member surveys, for governments and communities to consider during the pandemic:

“The pandemic has created tremendous challenges and great sadness, but it has also shown what is possible when there is political will to act quickly to benefit the public. This health crisis has shown that we must collectively and proactively take steps to create the healthier, safer, happier and more equitable communities that advocates and leaders collectively say we want.”

The Legacy of Cooper Jones: How a Family’s Loss Led to Washington’s ‘Share the Road’ License Plates