If you have participated in a Cascade ride you have seen a Cascade Outrider and have likely witnessed their acts of support. Longtime Cascade rider and volunteer, Leo Stone, shares the origins of this vital group through a tale of the 2018 Seattle to Portland ride. We are grateful for the safety and support they bring to Cascade rides.

Who we are: Cascade Outriders

What we were doing: Riding the 2018 Seattle to Portland (STP)

Where we were: Just past the Army base in Roy. We baked through the base with a hot headwind and I could use something cold. I'm heading for the little store to get some drink and I see another Outrider who waves me over.

"She's got some issues here." A young woman in her twenties on her back with a leg pulled back and tears in her eyes.
Cramping — which hurts so bad all you can try to do is stretch it out and wait it out.

I point to a nearby bike with a single 20 oz. water bottle. "Is this her bike?" The young man with her says yes.

I tell her, "Breathe slower if you can, deep and slow." She's grimacing and panting.
"How much have you had to drink?"
The young many with her hold up a camelback. "I've been sharing."

I ask about NUUN and no, neither person has had any electrolytes.

I take her bottle and fill it. "I'm going to give you three TUMs. If you'd like, chew them all at once and wash it down with this bottle."
She takes the TUMs and the bottle.
"Calcium helps regulate muscle contractions so this sometimes helps."
About three minutes later the cramp subsides and I see her relax.
"Are you a wizard or something?" she asks me.

"No, I'm a Cascade Outrider. Now, you might want to head over to that store and get something cold, and if you can drink it, get a V-8 juice drink. It's full of sodium and potassium."

After Lexington, I see another Outrider on the shoulder working on someone's flat tire so I pull over to give her some protection by flagging cyclists.
We've seen people ride into others, just not looking, or zoned out and not thinking. So we protect each other and the Medical Team by flagging traffic while we are on the road or on the trails.

I'm about 25 feet from her and facing oncoming riders. We don't like to use whistles to alert people unless it's really necessary. Whistles are strident and scare people. So we use duck calls.

Loud enough to be heard and get attention. Plus, it's just ridiculous and people do laugh. They swerve around us which is what I want.
She gets the people going again and we ride together down to the Lewis and Clark Bridge staging area.

In line waiting, someone asks us, "What's an Outrider?"

In the fall of 2014 and winter of 2015, a group of ex-Ride Referees, Medical Support Riders, a couple of ride leaders, and a League Instructor debated the question. We knew from our experience on event rides such as STP that having an experienced rider who could be there from the Club and help others would be invaluable. Someone who could pack a couple tubes and tools, some basic first aid materials — someone who knew the routes and the ride; knew who to call; knew how to protect others.

The old Ride Referee Program that most of us had been in, worked somewhat but had some serious problems. A referee enforces rules. We didn't enforce anything because we are not enforcers, we're not cops. So the name referee wasn't helpful. People got the wrong idea first. 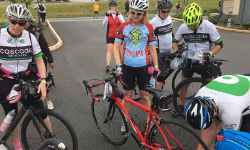 We wanted basic first aid skills but not to the Medical Support Team level. Enough mechanical ability to change a tire, minor adjustments, do a basic operability check on a bike. Traffic skills — the Ride Referee program had taught us how to influence behavior by being a role model. We incorporated traffic management skills from the League Traffic Skills and Cycling Savvy and modified them to fit our needs of riding in groups of people who didn't understand those skills. And experience again, from so many Cascade event rides, we knew where the problem areas were.

And the most important thing — who asks for help gets help.
Our attitude. The friend you didn't know you had.

We couldn't find a name. We didn't want anything that sounded like authority. We tried and rejected quite a few — too nerdy, too silly. Some ride groups use people like the old Ride Ref program and call them Ride Marshals. That was rejected as was Ride Rangers and a few even worse.

Then someone said "Outriders". We asked, what's an Outrider?

From Webster's Dictionary, an Outrider is someone who rides past the edge of a group to provide protection and scouting. Which sounded pretty close to what we envisaged we would be. And because no one really knew what an Outrider was, anything we did was exactly what an Outrider should do.

We worked up how we would work in rides, how to space ourselves out to give coverage, how to ride in teams, and overlap each other. We determined what our responsibilities would be, and how we would organize our group, how we could represent the club, putting a face and a set of helping hands to the Cascade image. Cascade saw the value of a volunteer group that could handle minor issues and reduce the sag wagon load, who could answer questions about the ride, understood the problem areas on the routes, and serve as eyes on the road for course conditions.

Our description of the group: the Cascade Outriders are a highly skilled and experienced volunteer group that provides ride support on Cascade Bicycle Club events. The group provides course support for logistical, mechanical, traffic, and medical incidents and provides information and moral support to riders.
They model and encourage safe and courteous ride behavior as well as compliance with CBC rules, local and state laws, and serve as community liaisons"

That was six years ago.

Outriding isn’t for everyone. You don’t set any best time records when you Outride. My record is 14 hours going from Seattle to Centralia. I’ve ridden one day faster than that. Your pace is dictated by how many times you stop to help people. And that’s the point of Outriding, stopping to help.

We’ve had some interesting times. One of our Outrider teams encountered a woman in the Lewis and Clark Bridge waiting area who was having an anxiety attack about riding that bridge. She was terrified of heights, and that arch over the river was not what she expected at all. So they calmed her down enough to get her to try riding it with them. They had her between them, told her just to ride with them, just watch the road in front of her and they would be on either side to guide her across. She made it and said later that they gave her the confidence to do it knowing they would watch out and just be there for her.

Sometimes even the experienced rider has one of those rides, where your last tube just flatted, your patch kit glue is gone, your water bottles are empty, and it’s 50 miles to Portland with a headwind.

We become your insurance policy, we don’t leave anyone behind.

So many riders who have never done long rides, getting out on the road to Portland with the idea that they can do this. 100 miles today and another 100 miles the next day is a daunting thought to many. It’s a challenge people make with themselves, and finding out that they can ride it is empowering, and we’ve all seen that become the spark that starts them off on a new journey to explore how strong they really are. You get to see this, and sometimes you give them a helping hand. Because sometimes people need one. 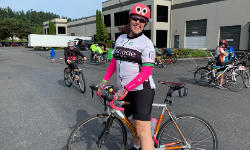 At traffic lights, we sometimes do an elevator speech of sorts — pull out our water bottle and yell out, “Who’s riding STP for the first time? Let’s give them a toast!”
Everyone pulls out a bottle and drinks on cue. And we talk about drinking before you’re thirsty, eating before you’re hungry.

Part of our training is to recognize where people can get hurt. We don’t want to see people riding up the side of semi-trucks at stoplights simply because the driver can’t see them in the blind spots and won’t even feel the trailer go over someone. We will ask people to get out of that position, and we will sometimes position ourselves to block people from riding up the side of a truck at a light. We do take a lane control position at times if we see people hugging the fogline on a narrow road and drivers passing closely. We want drivers to do full lane change passes, no one gets hurt. And we will ask personal support drivers to please meet up with their riders off the course.

We’ve set up additional training with outside education groups. We’ve used the Cycling Savvy program from the American Bicycle Education Association taught by their instructors. We modified their methods for our needs of our huge event rides.

I’ve felt a sense of history with our rides, considering that the STP is older than most people riding it. Cascade has become a cultural icon of the Pacific Northwest. Ever hear how you’re not really a Northwest cyclist until you ride STP? Our rides are bucket lists, I’ve met people from all over the USA and the world on our rides.

And that person at the Lewis and Clark staging area who asked us what an Outrider is?

We didn’t need to answer them, because others did. “Outriders are the people who have your back.”